When I first visited Takachiho back in July, it left quite an impression on me. I knew I wanted to go back and explore more of the area, so when a friend and fellow blogger, Lauren, invited me along on her birthday trip to the Land of the Gods, my answer was immediately yes.

We headed to the gorge first. Being a long weekend, the parking lot was already full of people lining up for a shuttle bus. We decided to walk it and a few members of our group hurried ahead to put our names down for boats. The wait would be 4.5 hours.

I didn’t mind so much; I got to explore more of the area. I discovered a roadside waterfall and another viewing deck higher up that I missed the first time around. We  walked through the little curio chops and food stalls, which serve fresh savoury mochi. 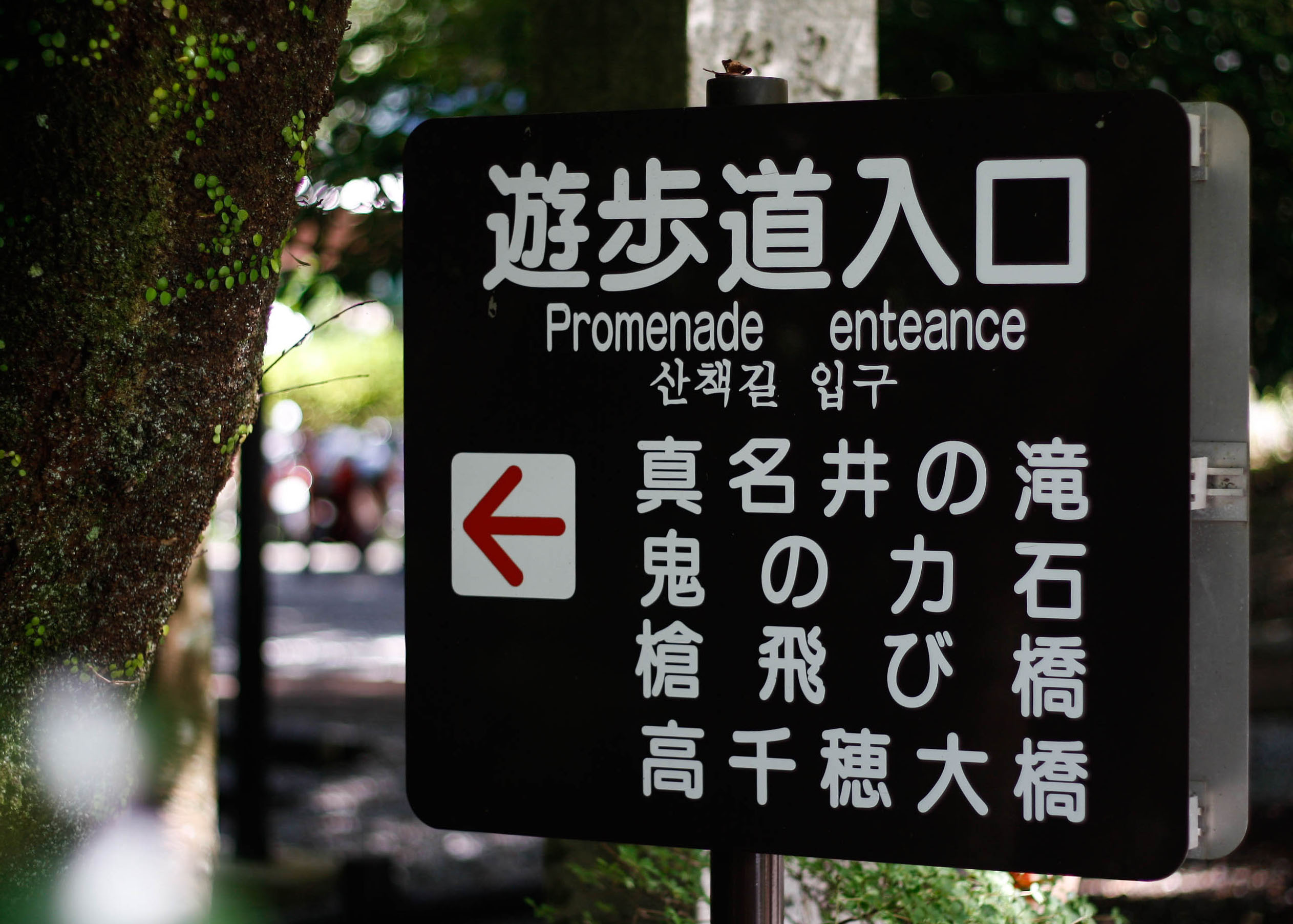 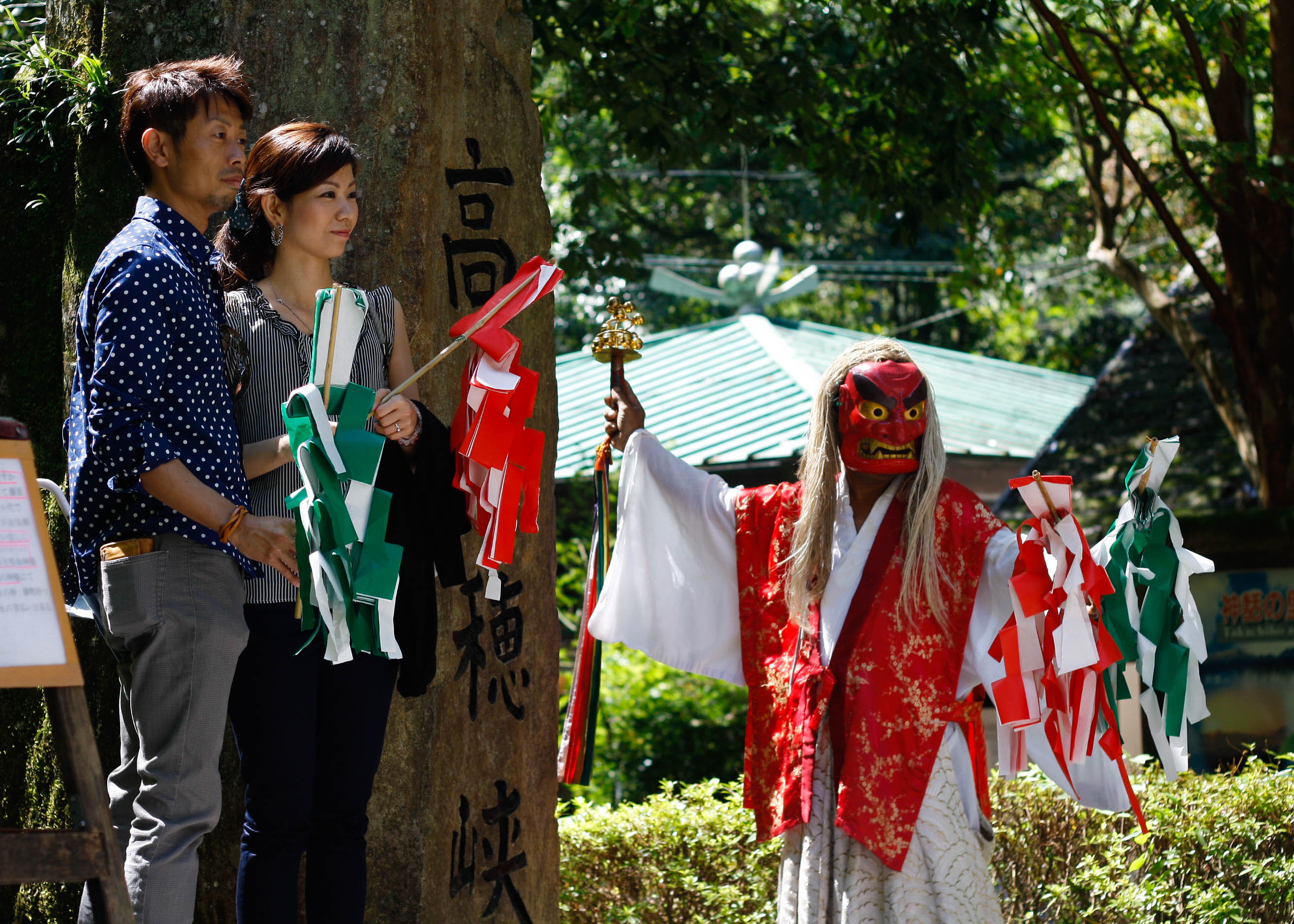 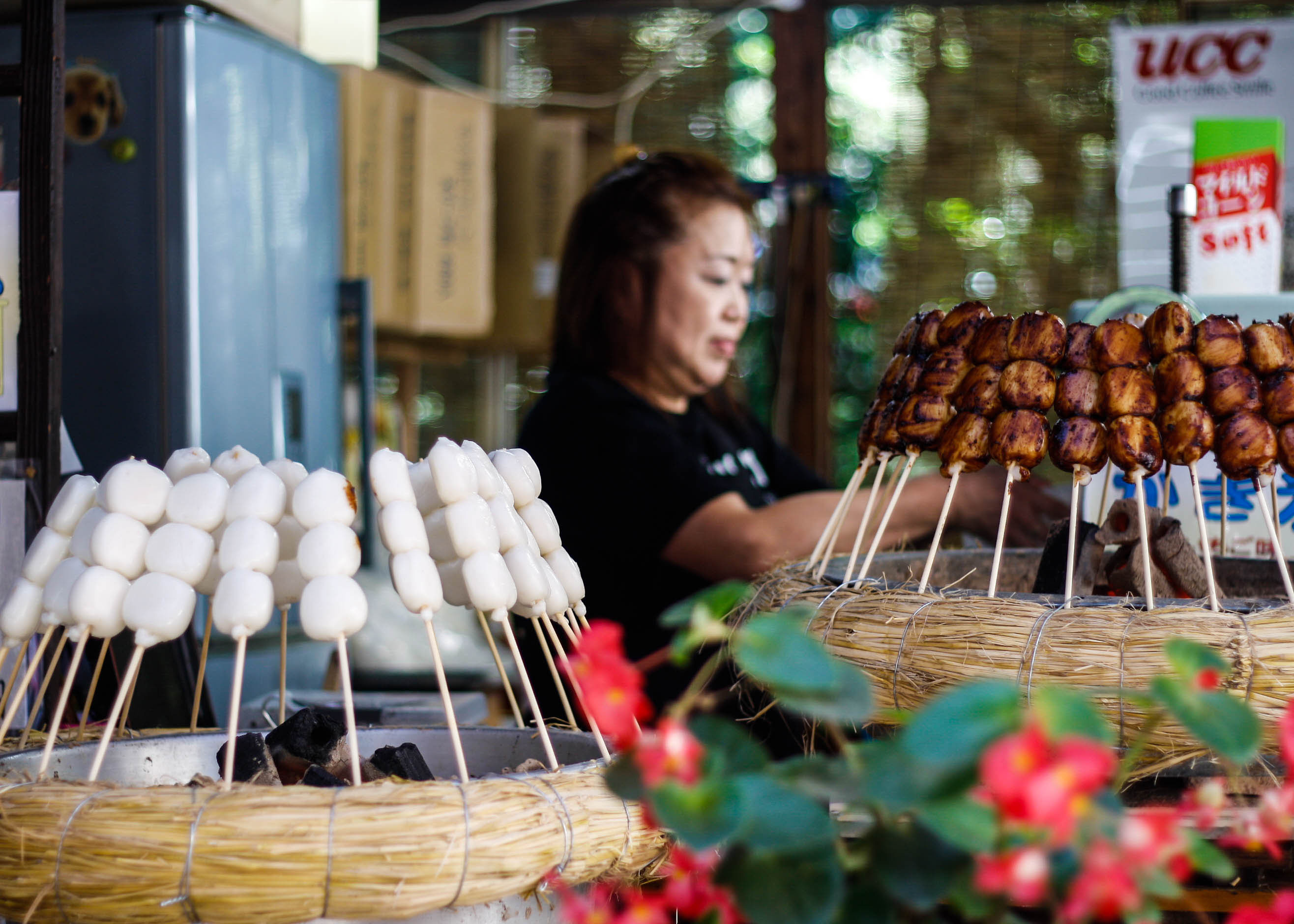 We also decided to have lunch while we waited. I was really excited about this bit – walking around up and down stairs had worked up my appetite and I had heard about a somen restaurant that sent your lunch swimming down a bamboo trough.

Somen are long, thin wheat noodles usually served in a flavoured broth. Dousing them in boiling water and then placing them in cold spring water is a cooking method native to Takachiho.

There are actually two restaurants side by side that serve the speciality; each of them has a counter with bamboo troughs on either side.

We were seated and then given dipping bowls of spring onion and ginger broth. The noodles come down the trough pretty fast and it took me a few turns to get the hang of it; you have to place your chopsticks in the centre of the trough as a wall, and wait for the noodles to dam before scooping them up into your dipping bowl. Luckily, there are woven baskets at the end of the troughs to catch any noodles you miss. 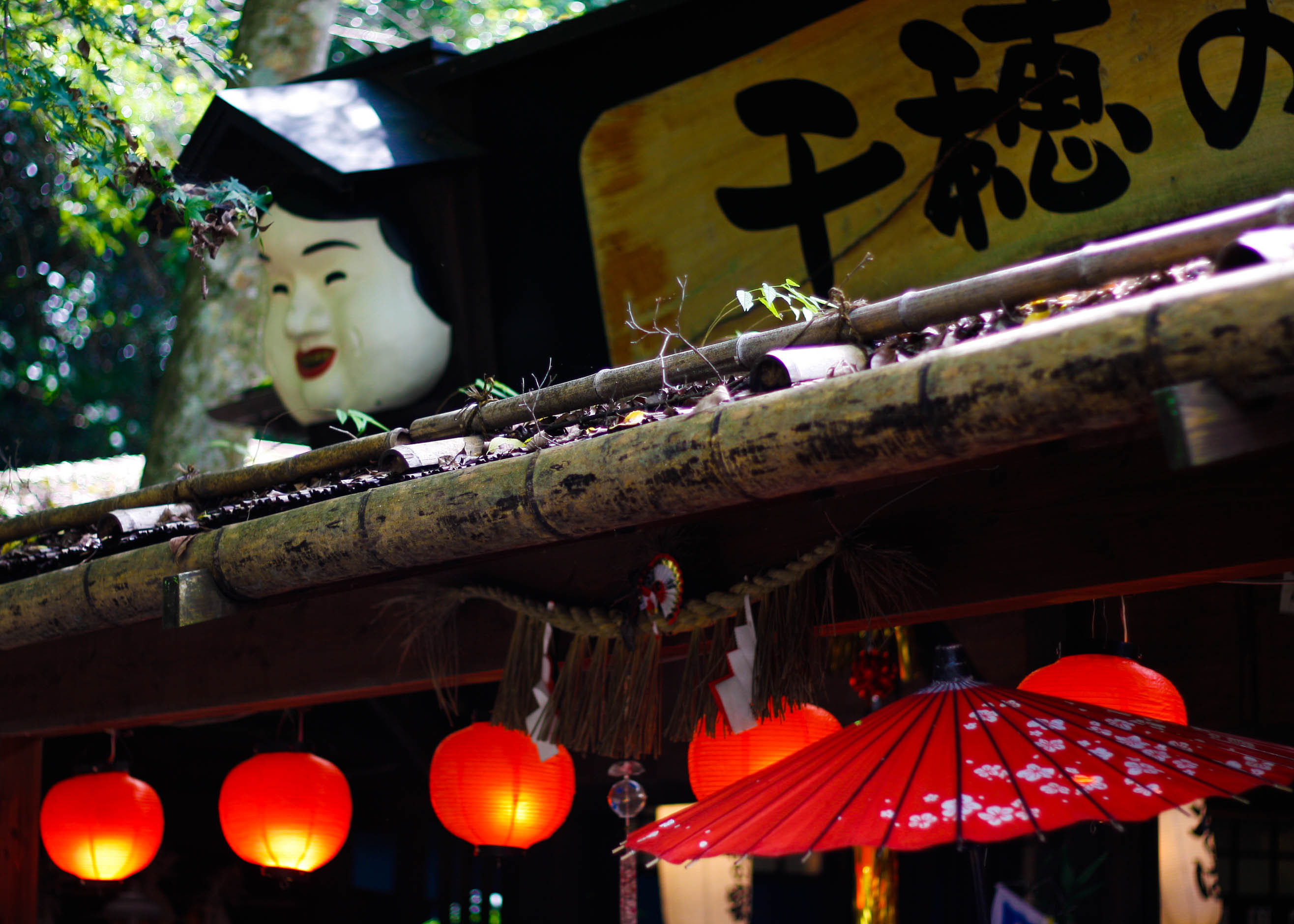 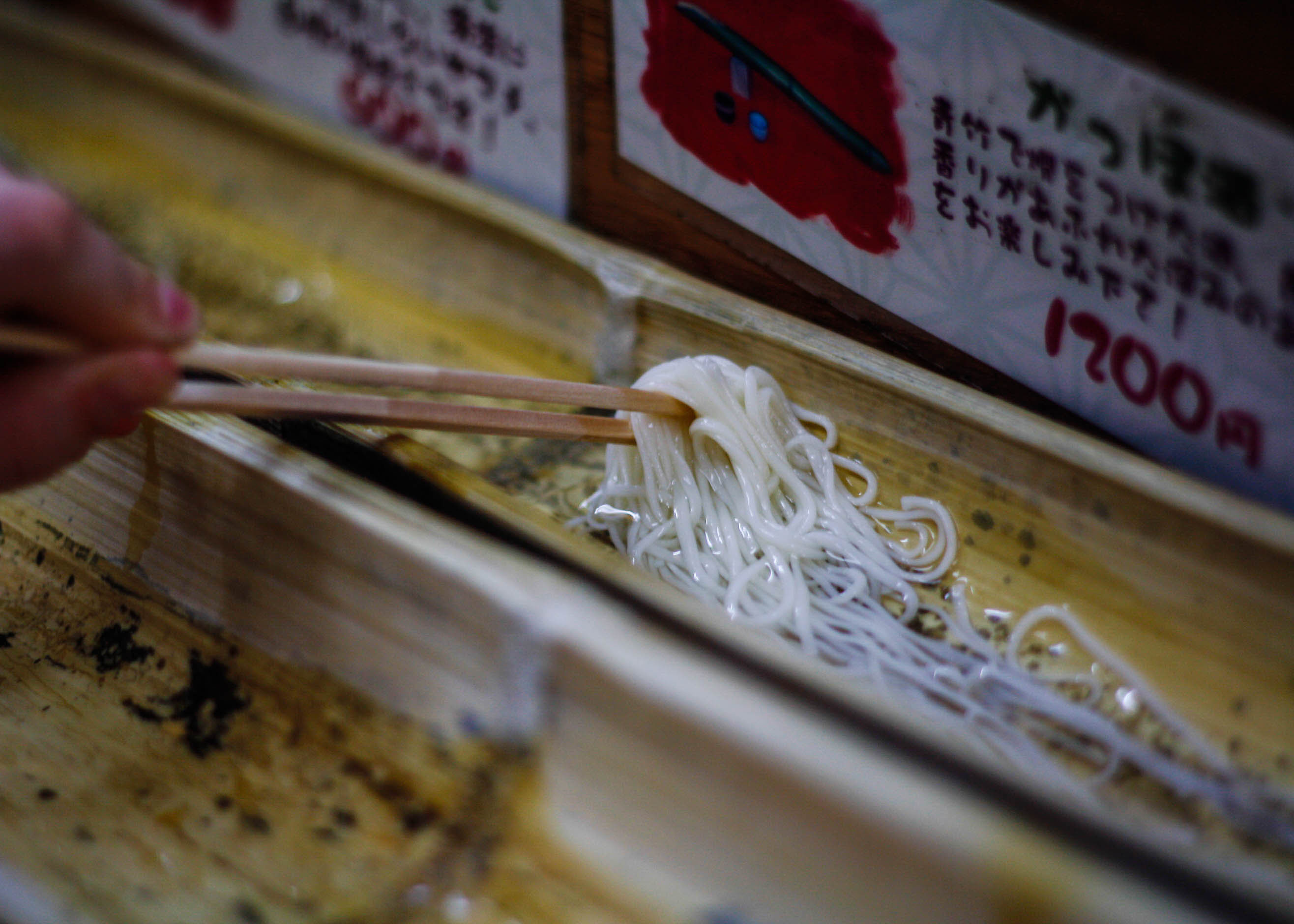 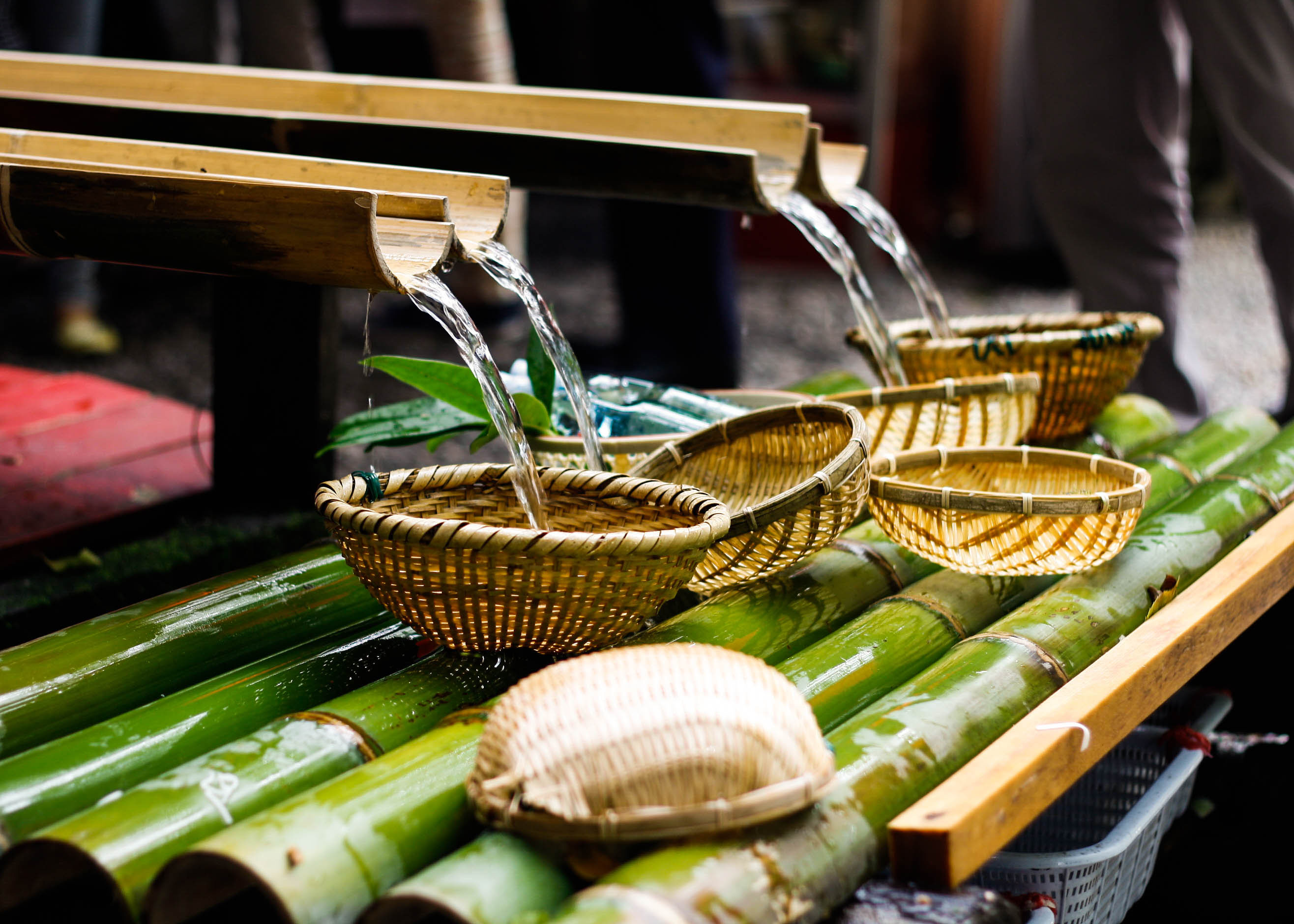 After lunch, we had a few more hours to wait before heading down to the boats. Each boat can seat up to 3 people and costs ¥2000. Again, a really good deal, because the experience of rowing through the gorge is incredible.

For a second time, I was in complete awe of Mother Nature. 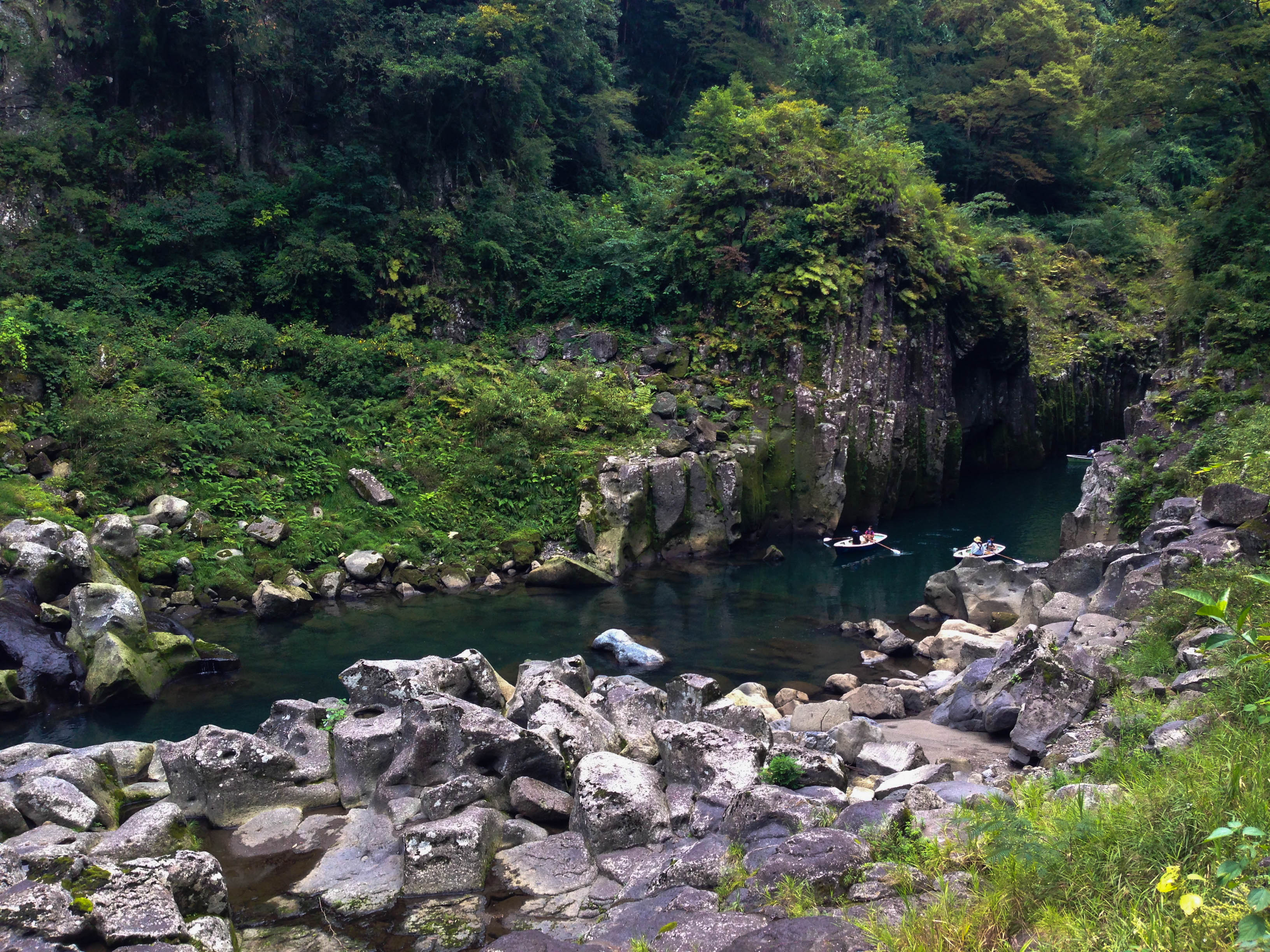 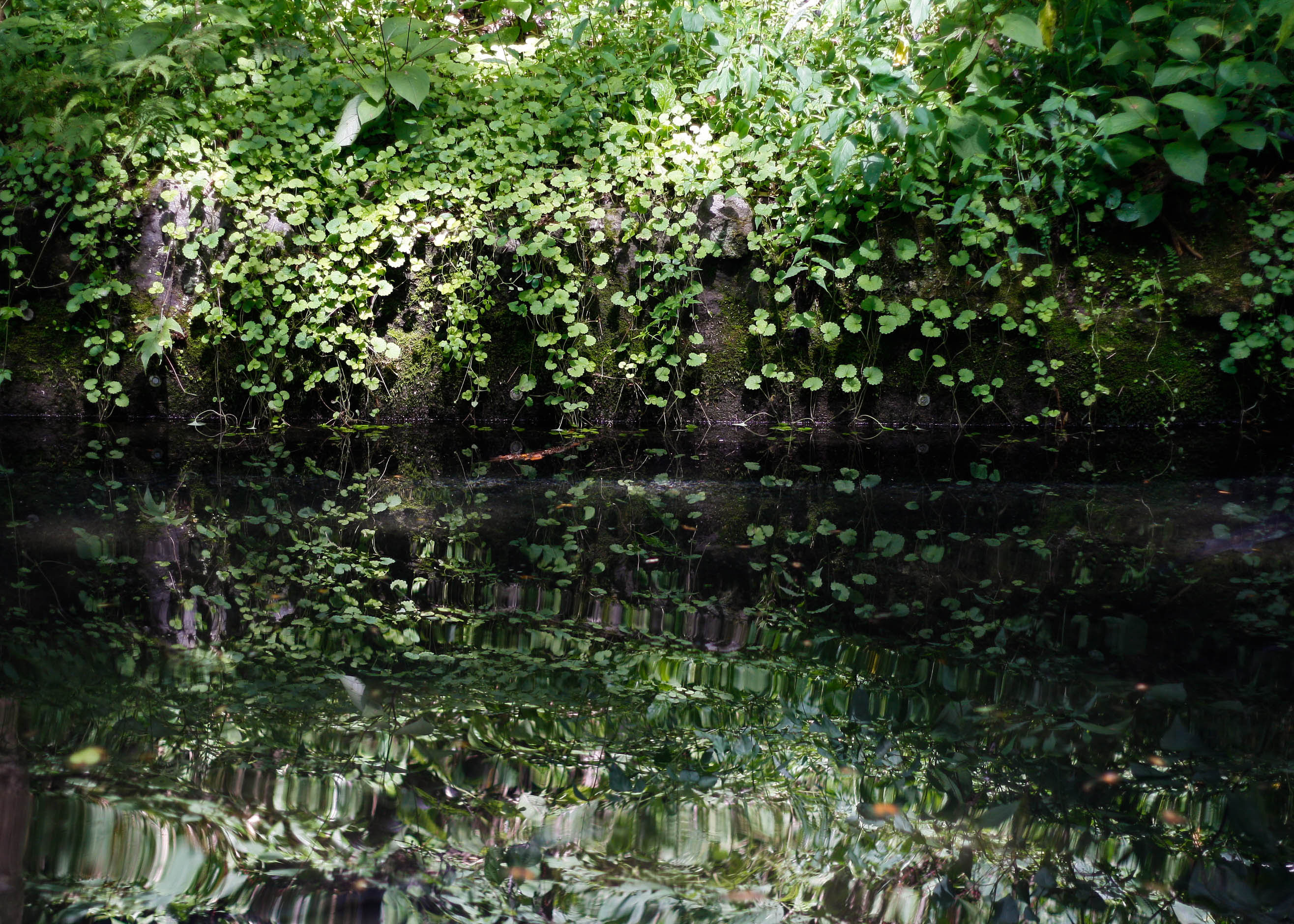 After the boat ride, we headed to the Amanoiwato Shrine, which is about 10km (6.21 mi) outside of central Takachiho. The shrine venerates a nearby rock cave, where the sun goddess Amateasu is said to have hid after a fued with her brother, Susanoo.

Amaterasu was given rule over the skies by the god, Izanagi. This did not make Susanoo happy, and after his numerous complaints, Izanagi banished him to Yomi. Susnoo acquiesced, but first visited his sister for one last time.

Amaterasu questioned her brother’s intentions and challenged him to prove his good faith. The two competed as to who could produce more divine children; Amaterasu produced three goddesses from her brother’s sword and Susanoo produced five gods from Amaetasu’s ornamental chain.

Amaterasu was adamant that she had won, claiming title to the gods made from her belongings. This caused Susanoo to fly into a fit of rage, wreaking havoc across the heavens.

Amaterasu fled into a cave and the world fell under darkness. On earth, crops died and the people began to suffer. The other gods met and devised a plan to lure Amaterasu out of the cave. 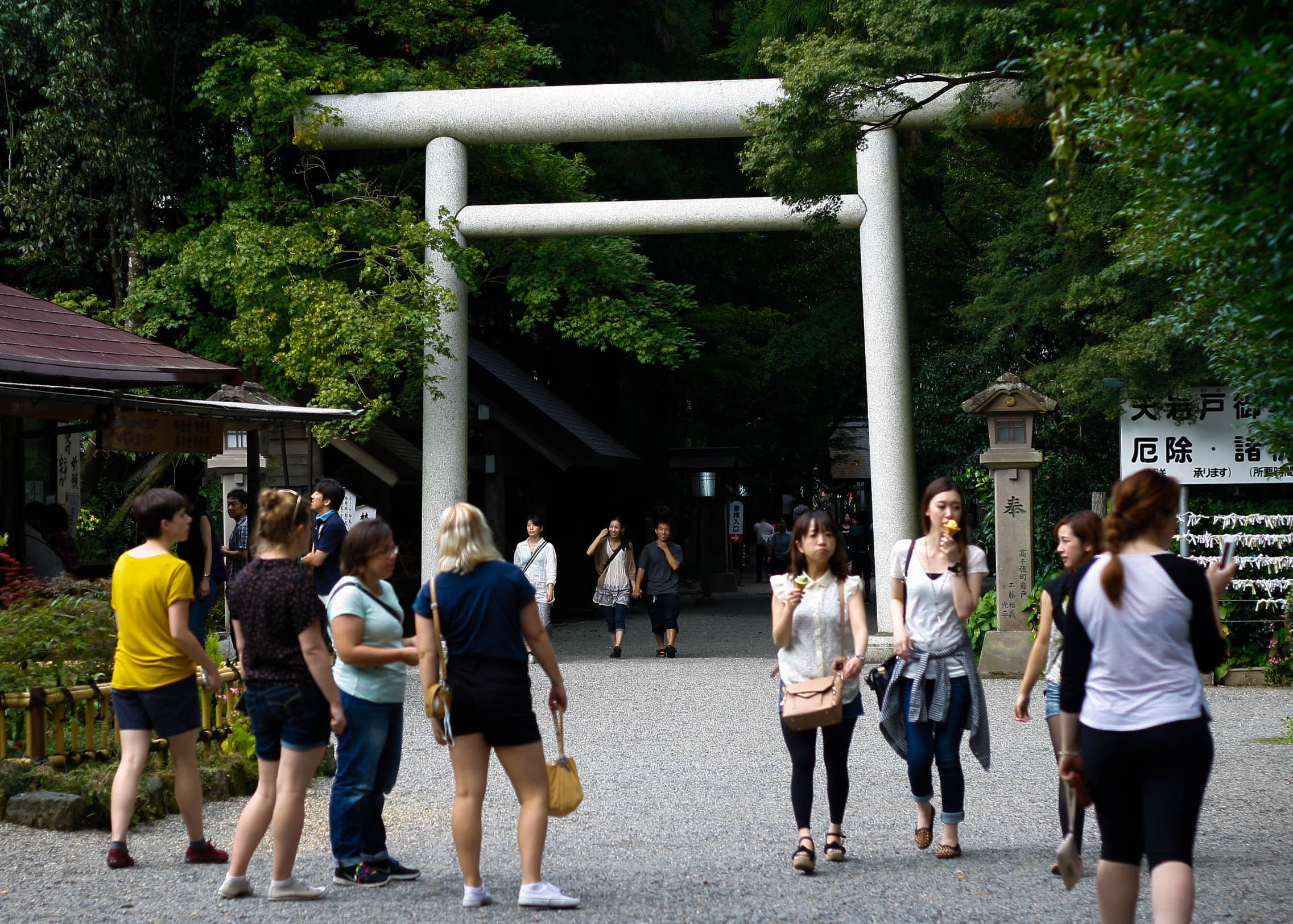 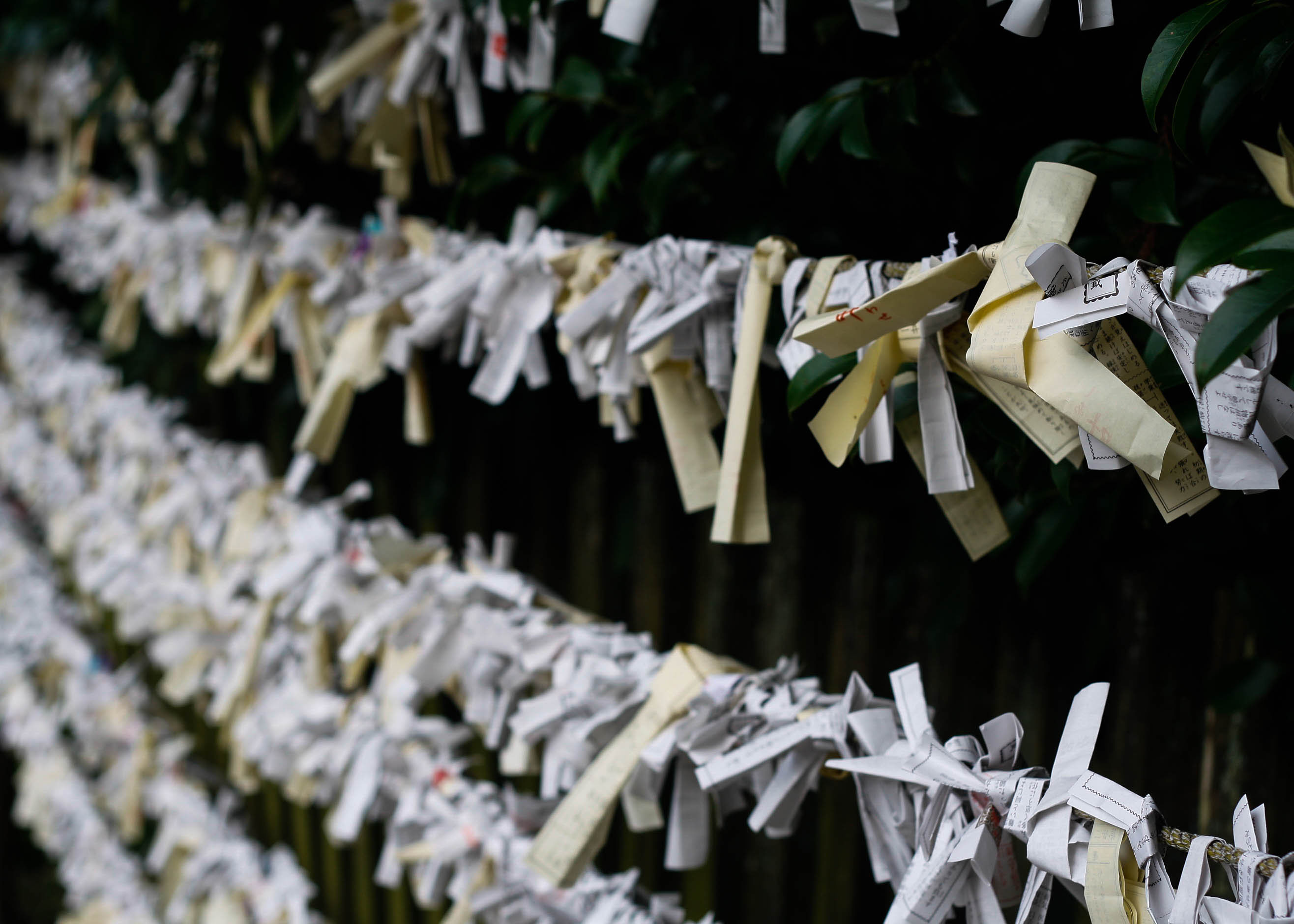 The cave is a ten-minute walk from the shrine, at the end of a path that runs through little ice cream shops and curio stands. At first, this makes it seem like just another tourist attraction, but as you walk, the rest of the world starts to disappear.

The cave is located in a hidden otherworld, something akin to the scenery in Lord of the Rings. A bridge transports you across a brook that meets another, and when you round the corner, the gate of the shrine greets you in all its glory.

Thousands of stacked rocks spill out of the cave. These iwasaka were made during ancient times by worshippers hoping to invoke the presence of deities.

If you stand still for a second, and look out to the river, you can feel the energy of the place. Divine or not, it is breathtaking. 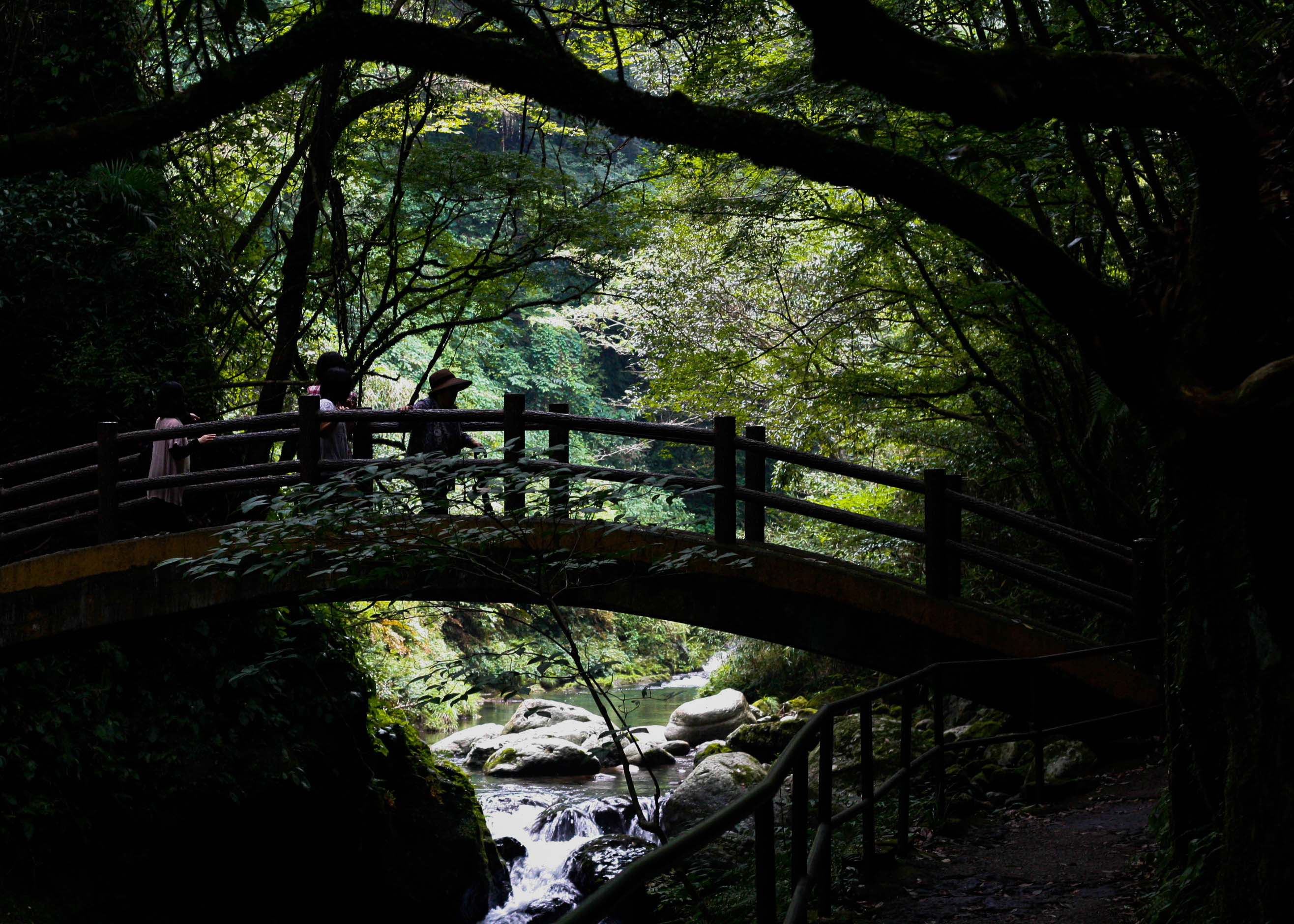 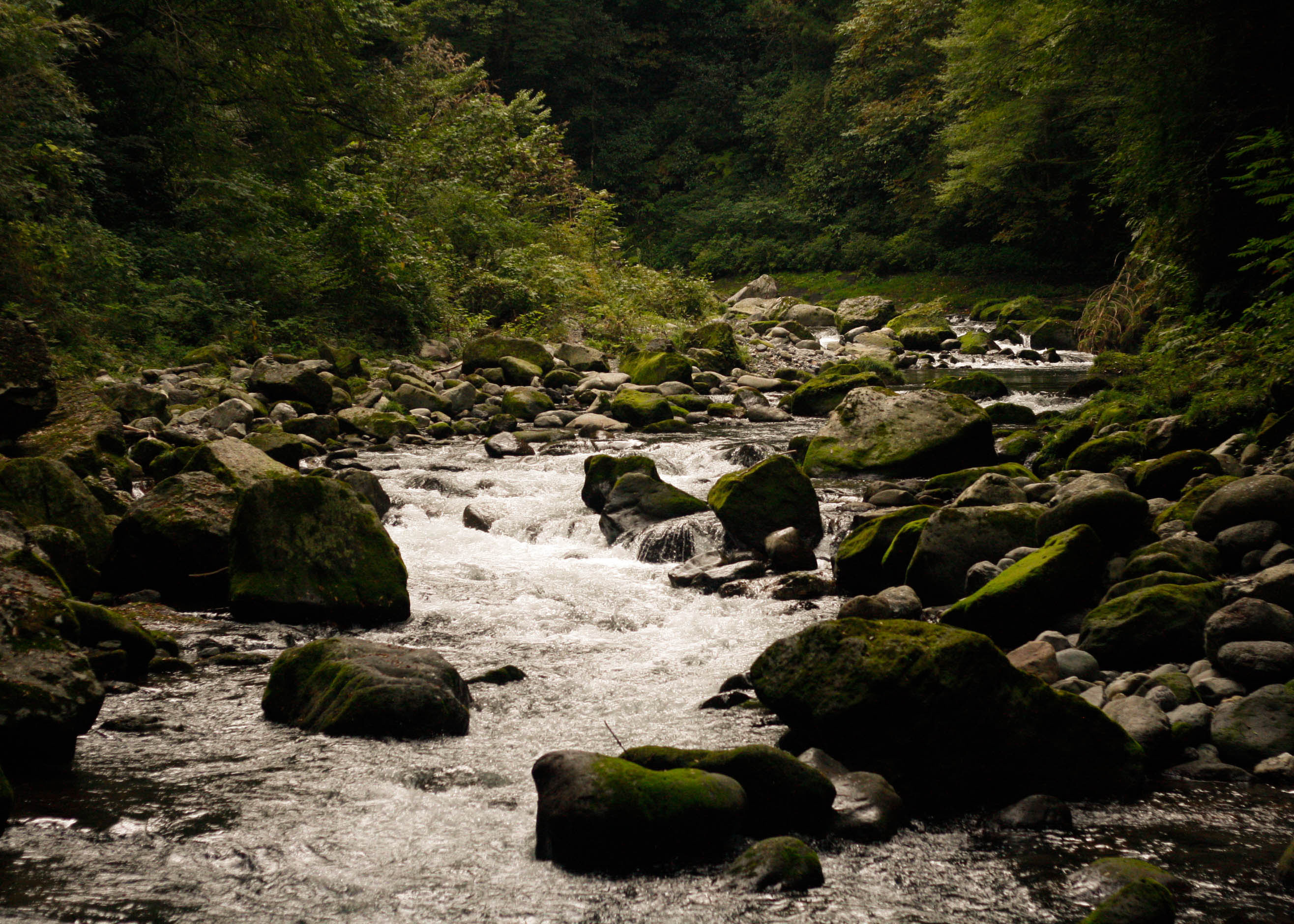 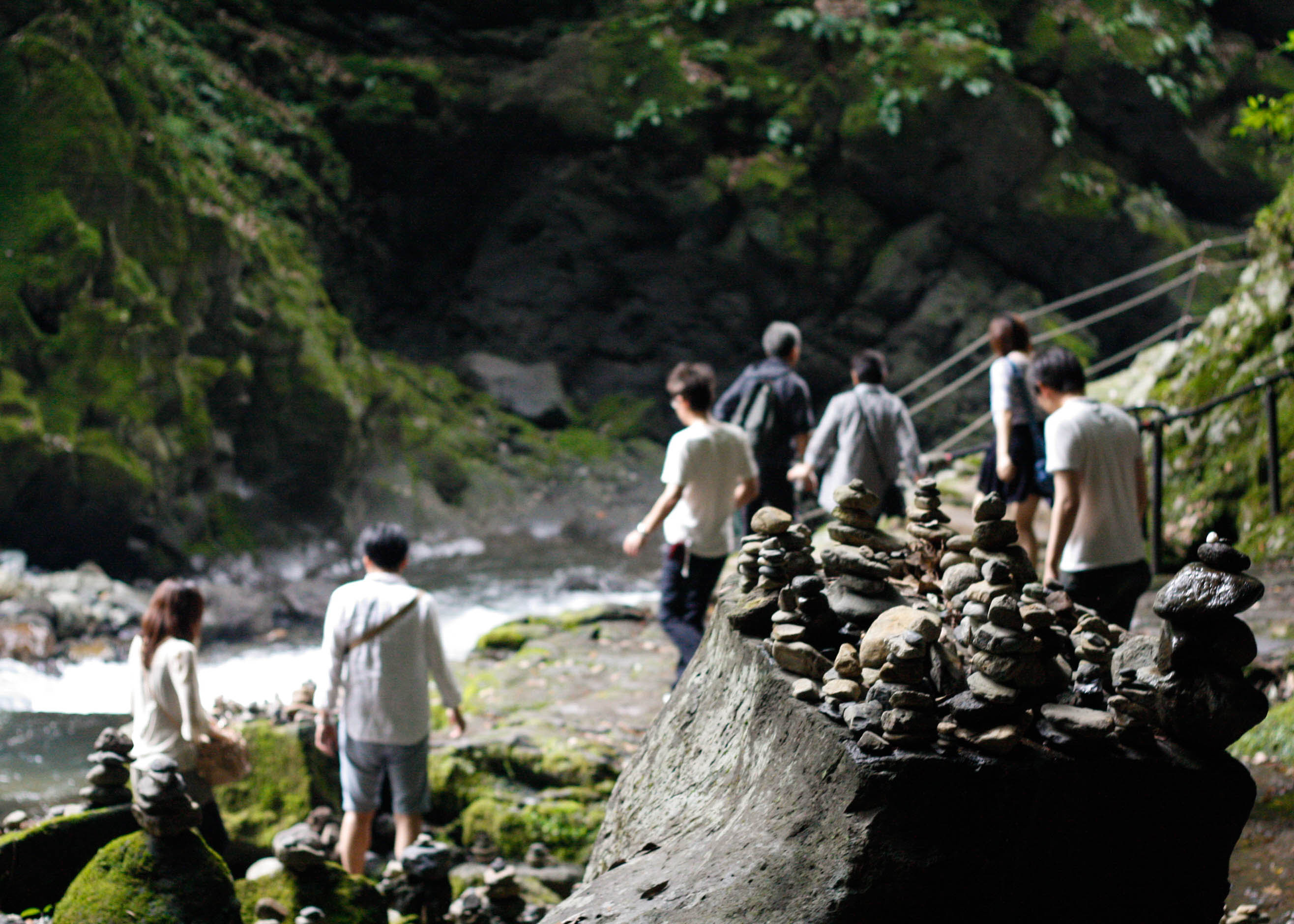 After grabbing dinner at a local udon shop, Marason-tei (マラソンー亭), we headed to Takachiho Shrine to see the Kagura Dance.

Kagura is a shortened version of the 33-part Yokagura Dance, which has been passed down from generation to generation as a representation of what the gods did to lure Amaterasu out of the cave.

The first part is the Dance of Tajikarao, who went searching for Amaterasu when she disappeared and suspected she might be hiding in the Amenoiwato cave. 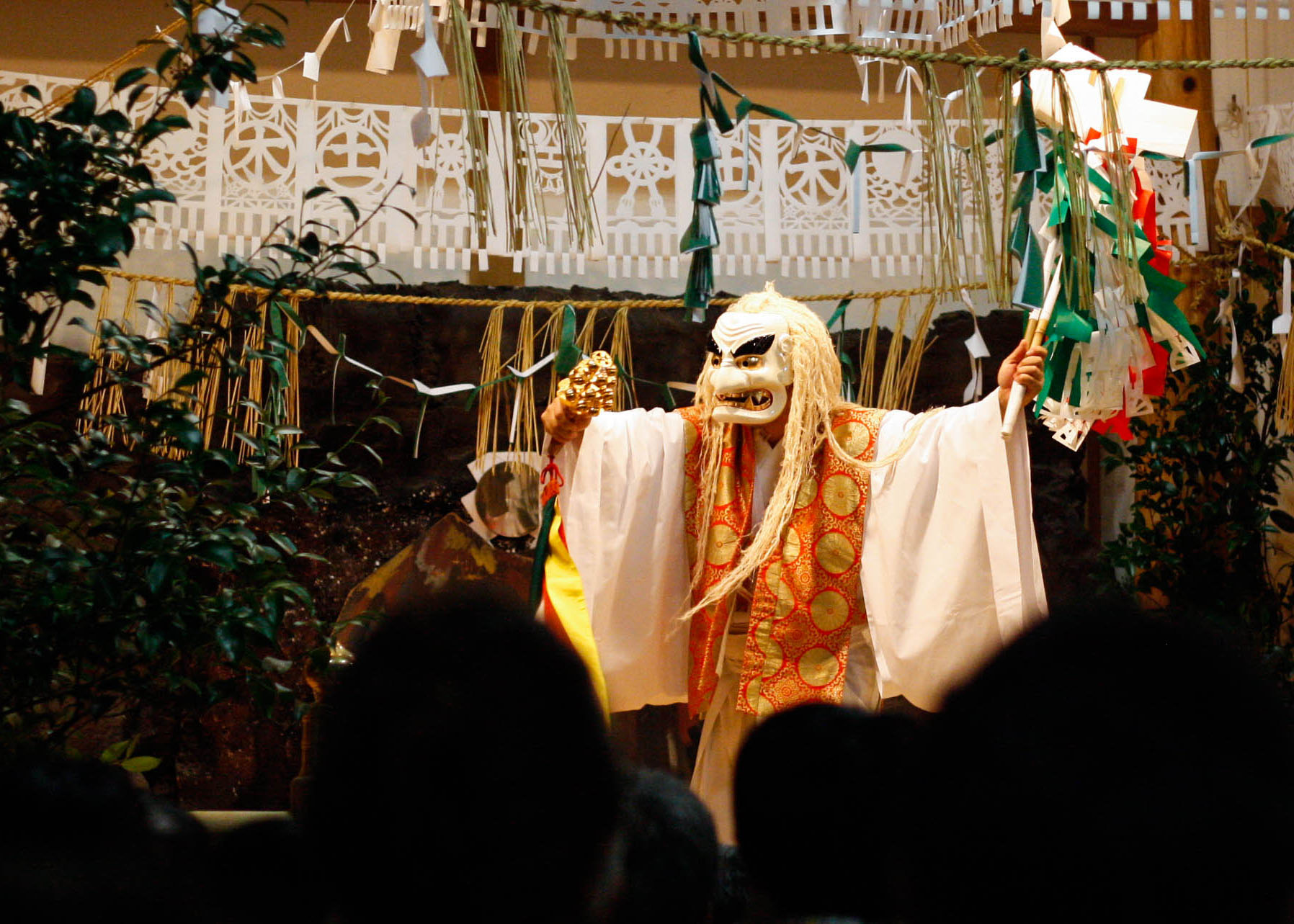 The second part is the Dance of Amenouzume, which was so amusing, the laughter of the other gods made Amaterasu peek out of the cave in curiosity. 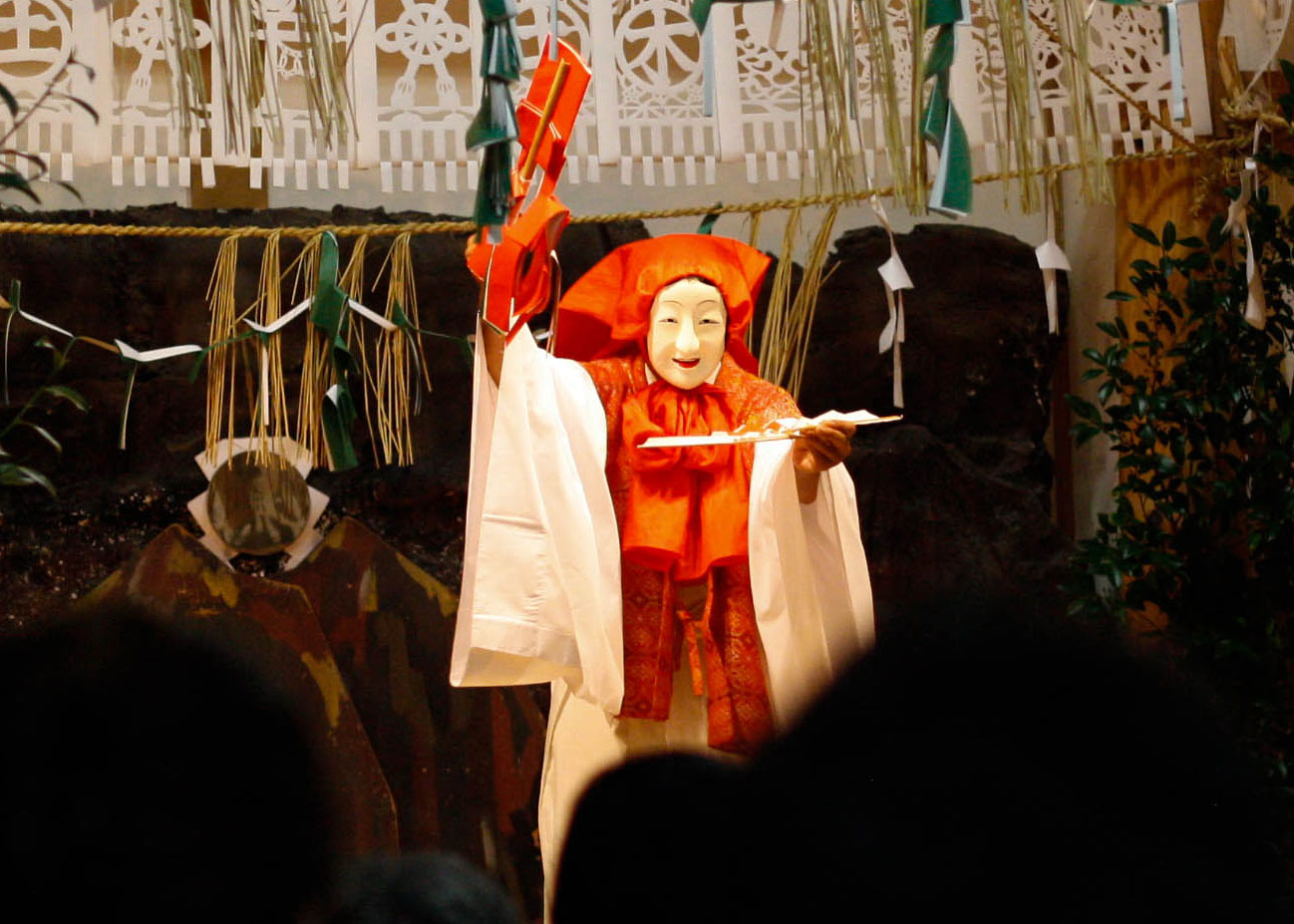 The third part is the Totori Dance. When Amaterasu peeked out from the cave, the god Tajikarao removed the stone doors and carried them away. 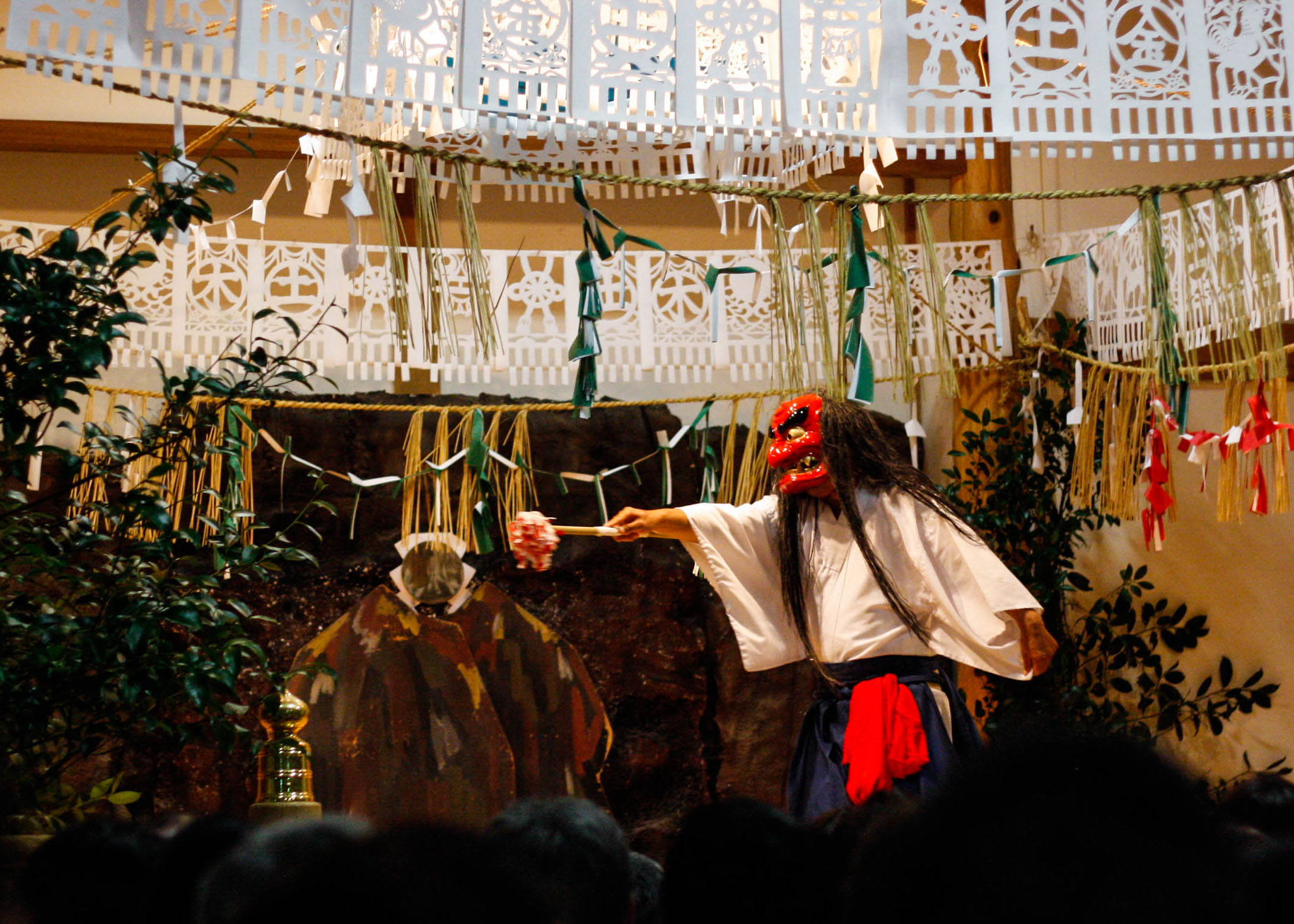 The last part is the Goshintai Dance and shows the creators of Japan, Izanagi and Izanami, making sake and drinking it. 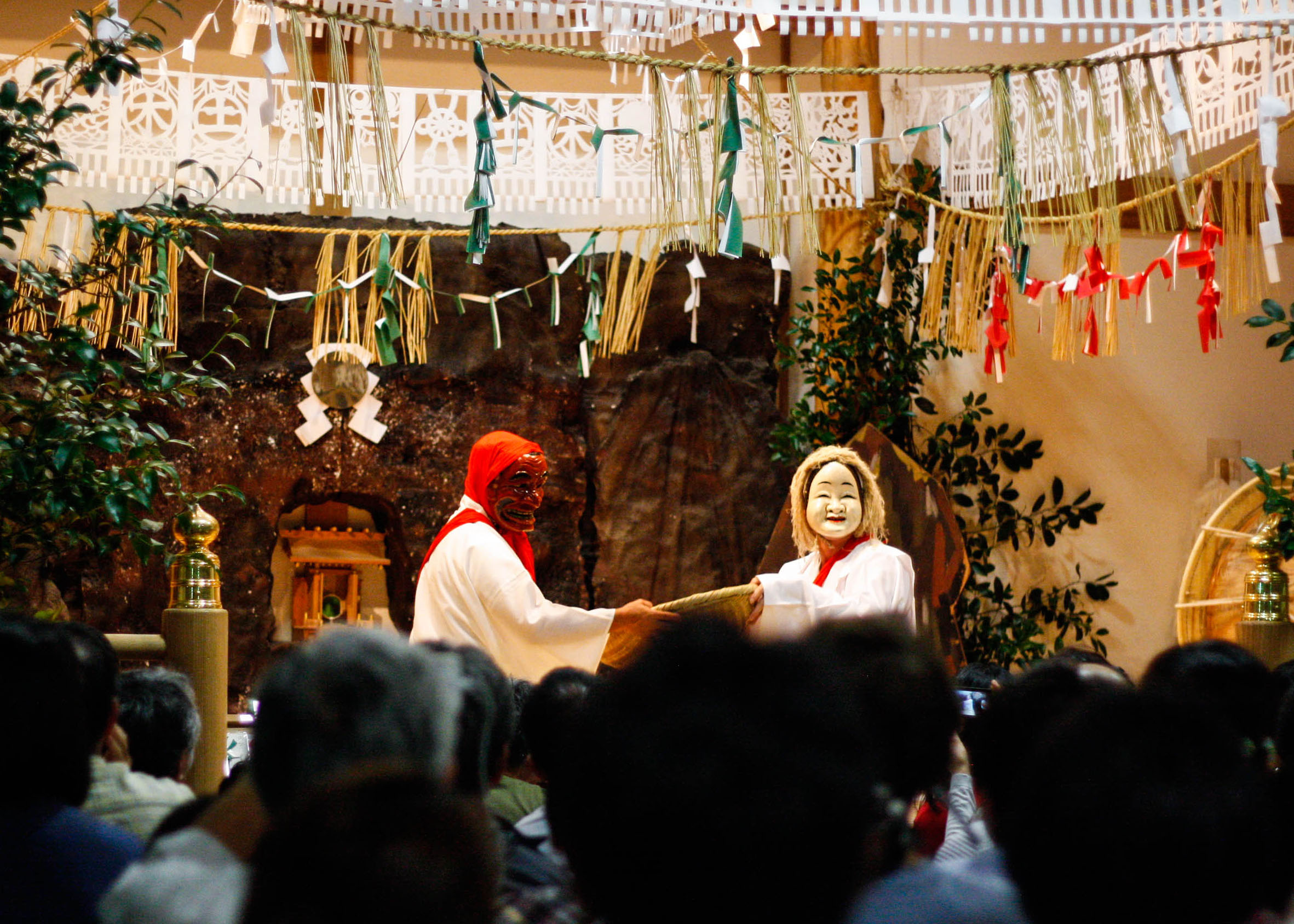 The two dancers then came out into the audience, offering sweets and posing for photos with visitors. It was the perfect end to an incredible day. 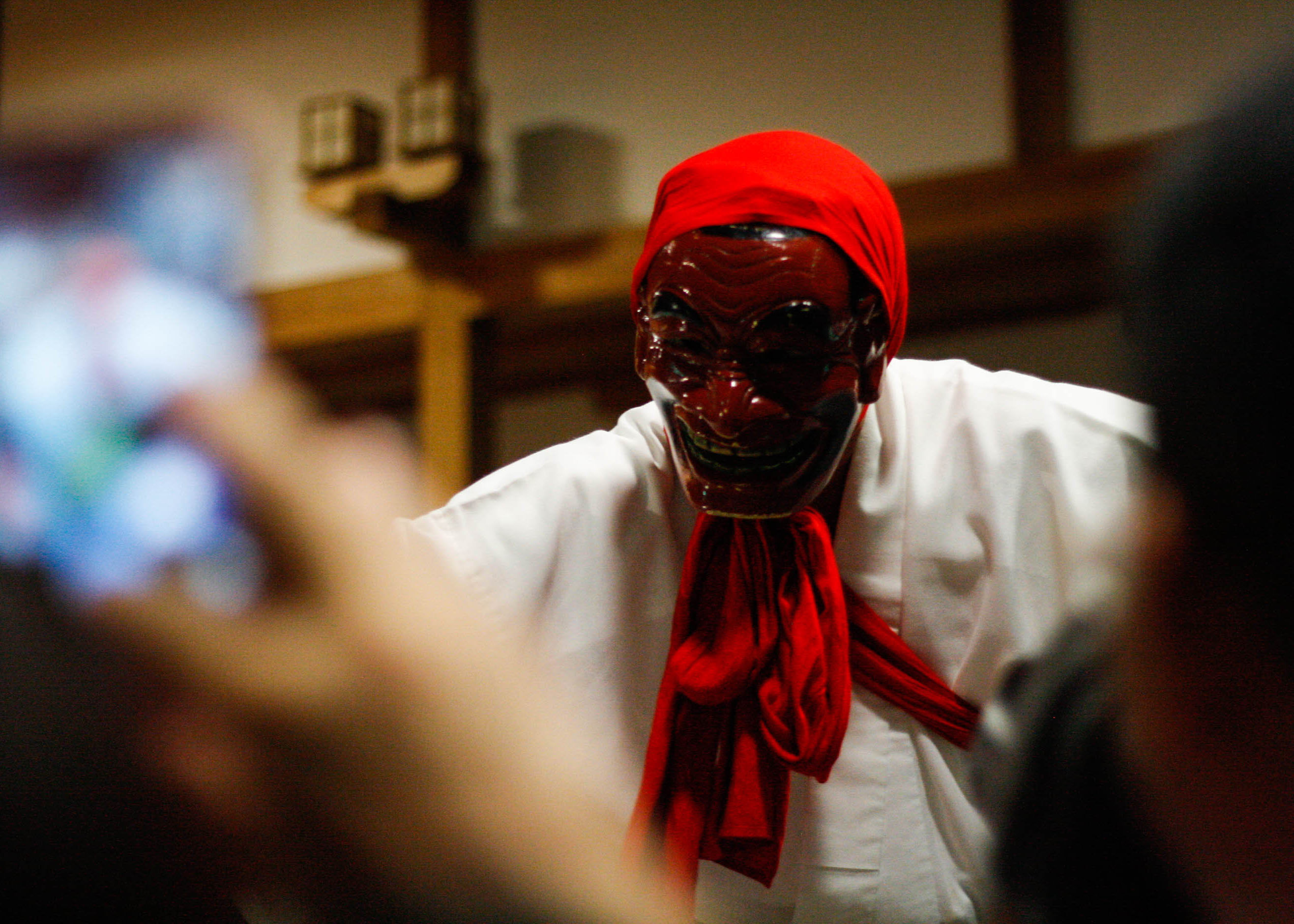 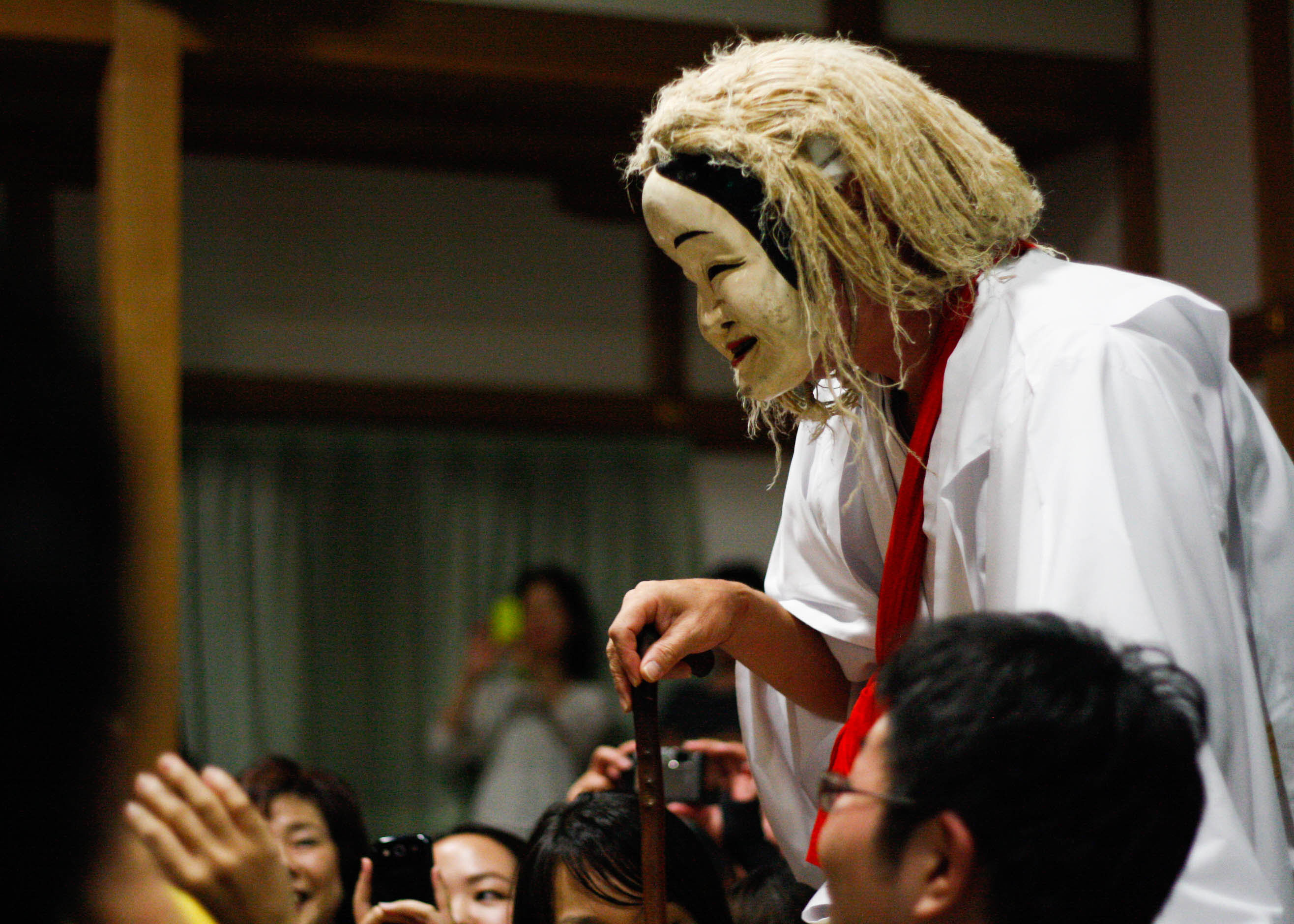 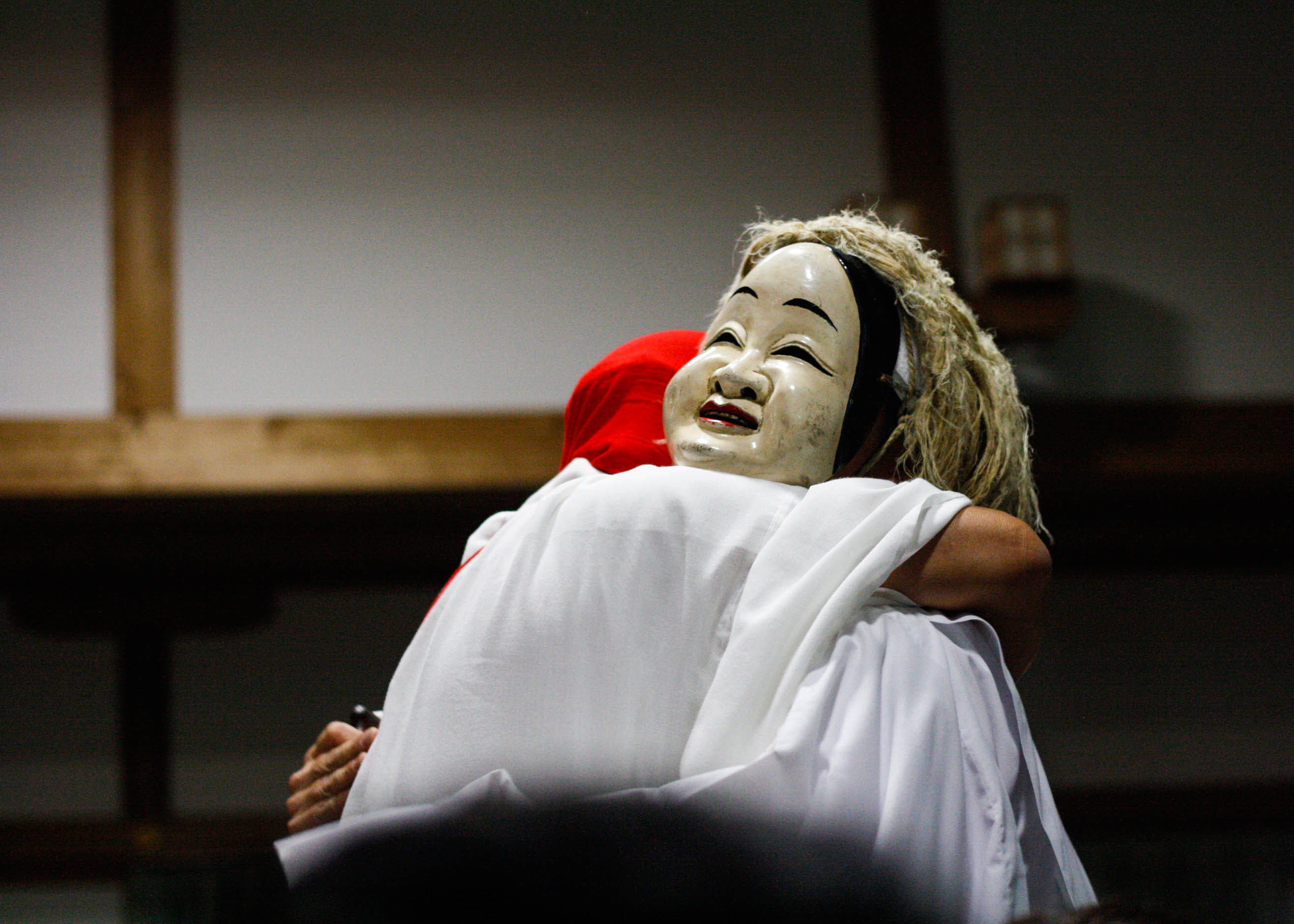