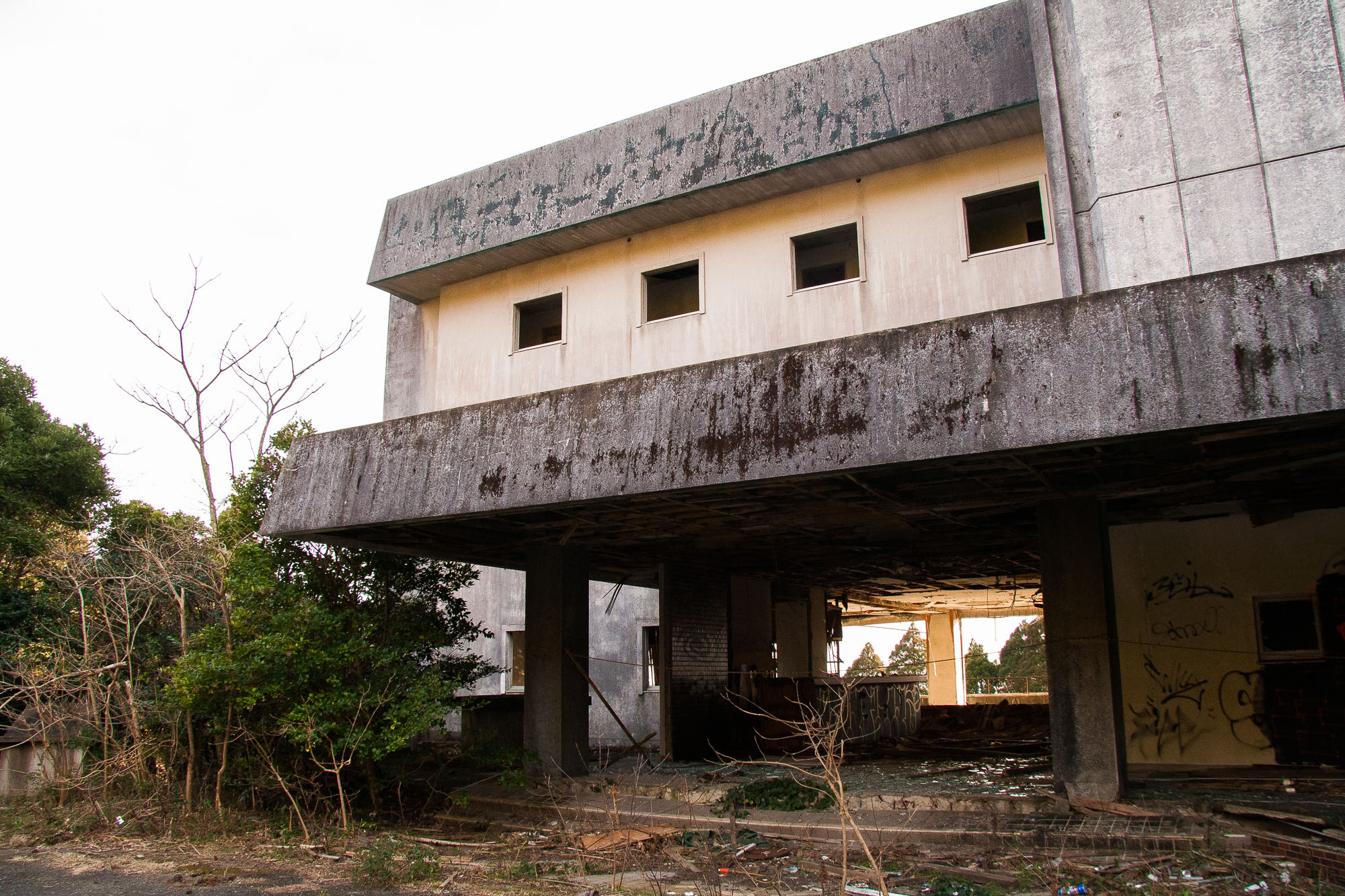 In Out of the Silent Planet, C.S. Lewis wrote, “The love of knowledge is a kind of madness.” I must be kind of mad, then, because everyone who knows me knows that I suffer from incessant curiosity. And if you read my blog, you know that that curiosity regularly centres on the morbid. A forest of suicide victims ? A prison of torture? There like a fucking bear.

It sometimes disturbs me – perhaps ironically – how much I am drawn to this darkness. Especially so when I think back to how young I was when I began poring over news articles and books and documentaries on the most gruesome of cases, the most terrifying of things.

But then I remind myself that everyone loves a good train wreck; our propensity for the macabre just manifests in different ways…gory reality TV, courtroom dramas, disaster footage, celebrity scandals, reddit AMAs…

I indulged myself most recently by exploring an abandoned hotel on Miyazaki’s most southern tip. 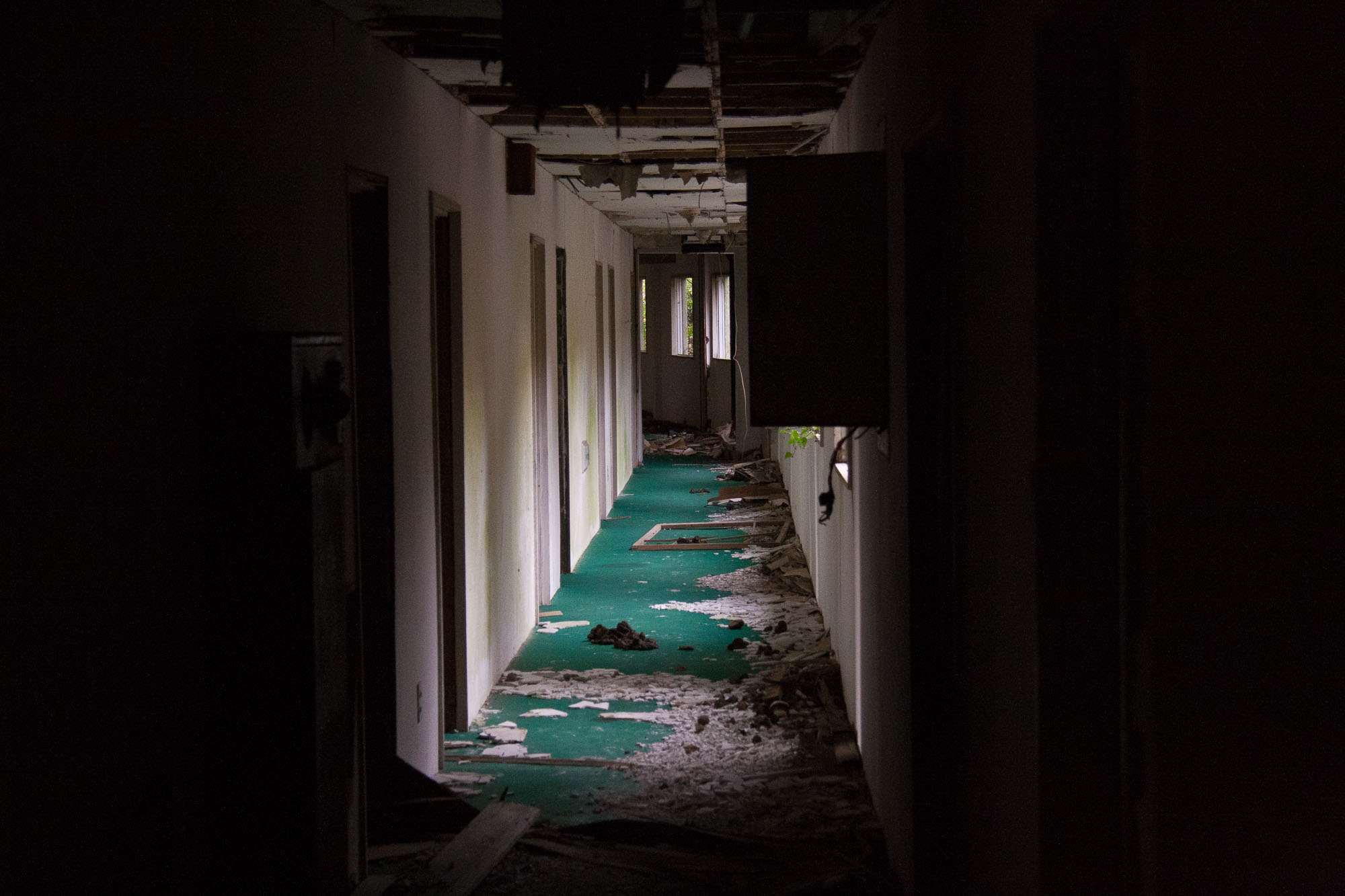 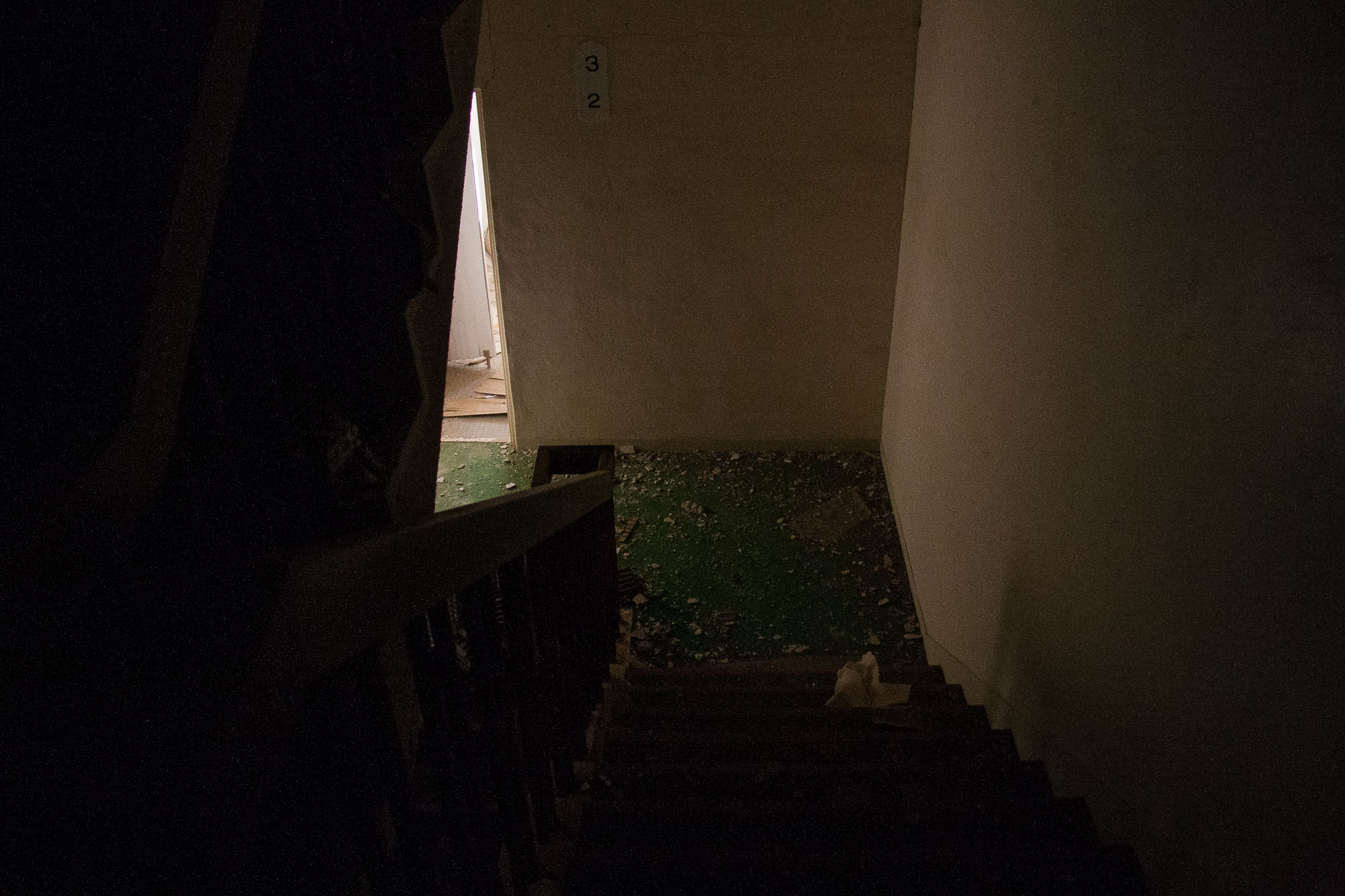 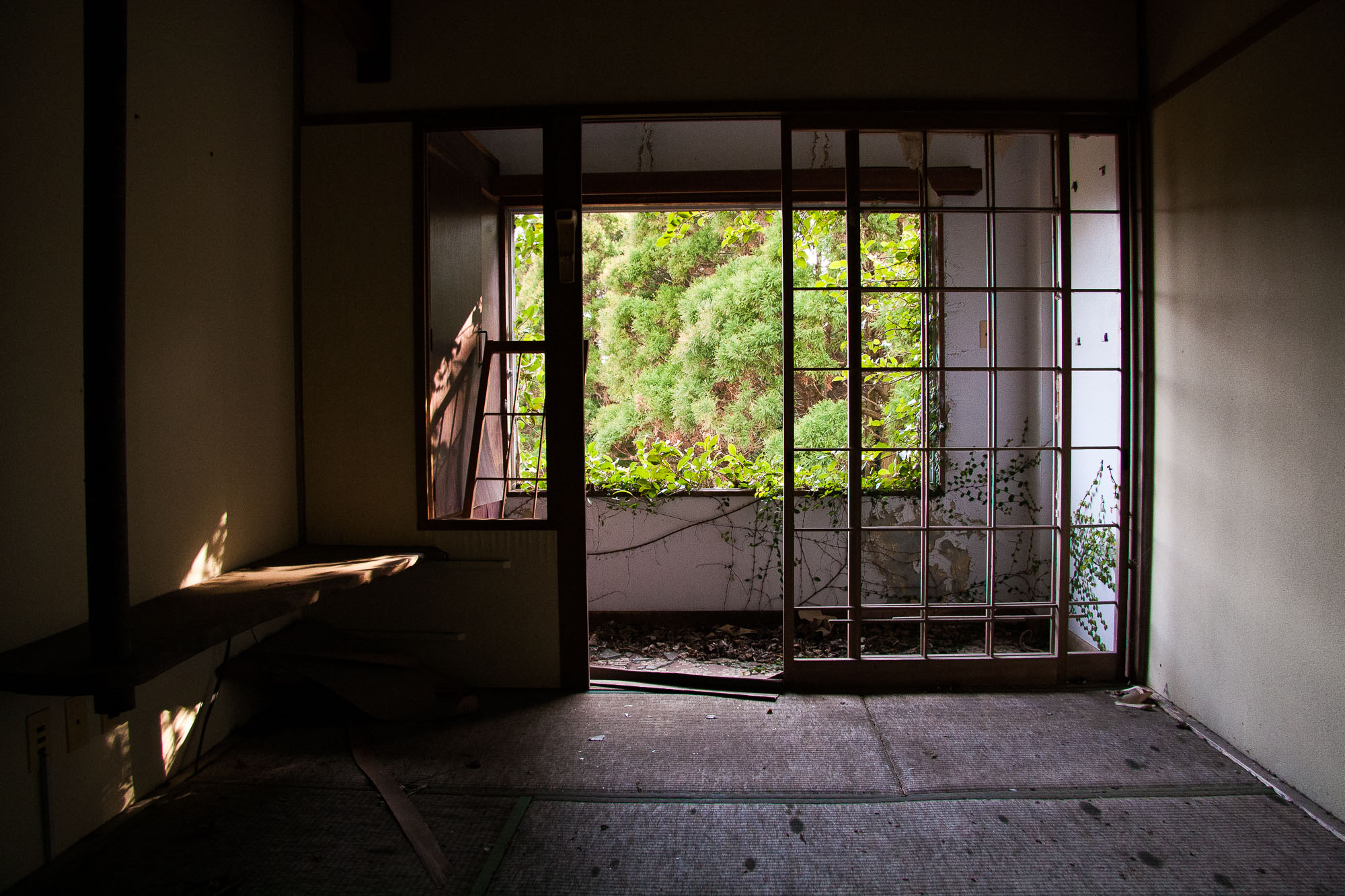 Cape Toi is actually home to several abandoned hotels. I had a look around one of them on my first visit to the national park last November. It still strikes me as odd that a place so beautiful never found success in the tourism industry. That’s the generally accepted reason for why the accommodations stand vacant, anyway.

“Or someone died here just after it opened and then guests began to report strange sightings at night…” Ian grinned at his concoction before disappearing out of the bedroom and down the passage.

We had spent the better half of the afternoon walking with the wild horses that the area is famous for, visiting the Cape’s lighthouse and admiring the view of the rocky coastline from Misaki Shrine. Stopping at the hotel was more of an afterthought; we pulled into its desolate parking lot on our way out of the park. 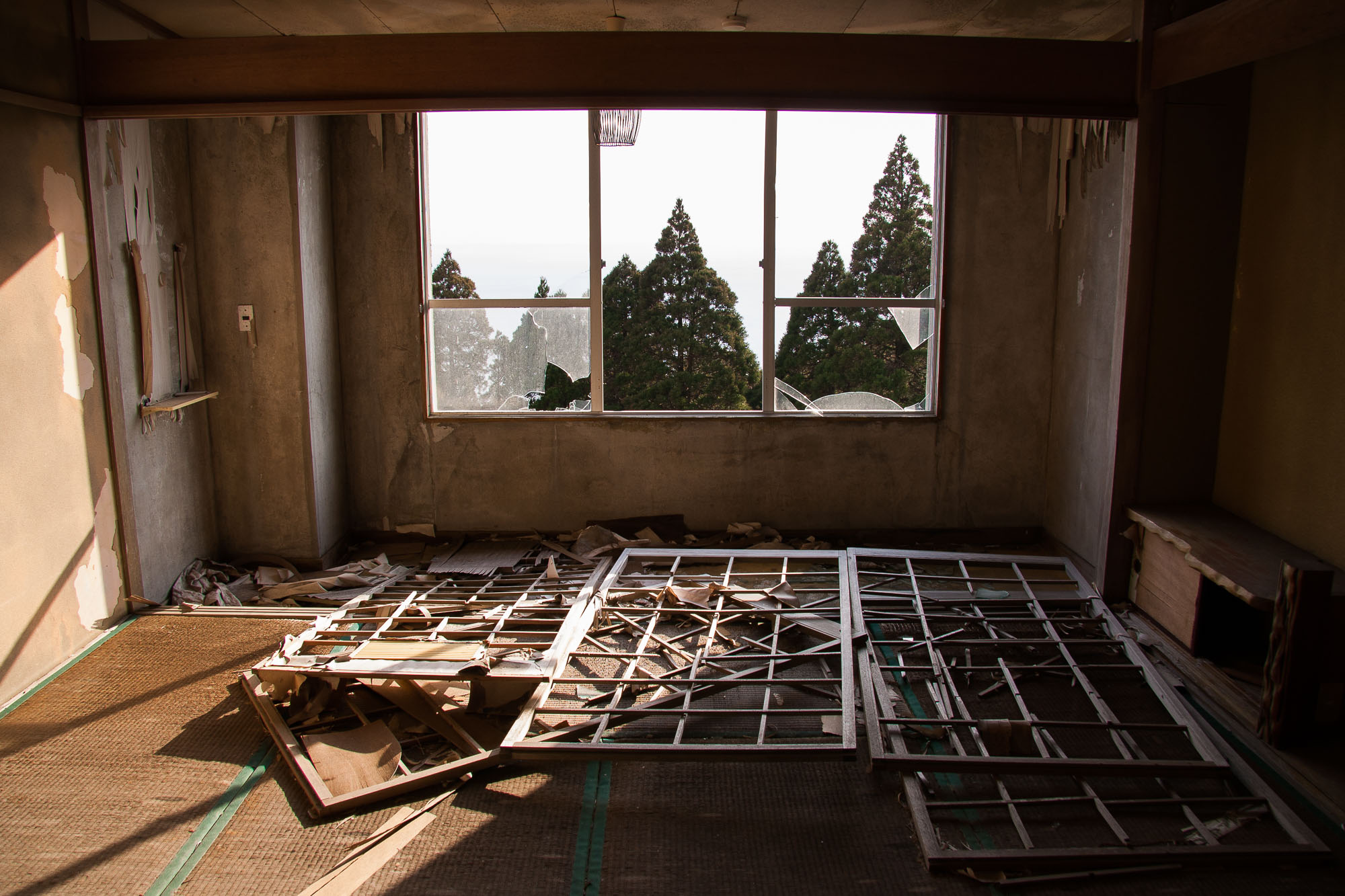 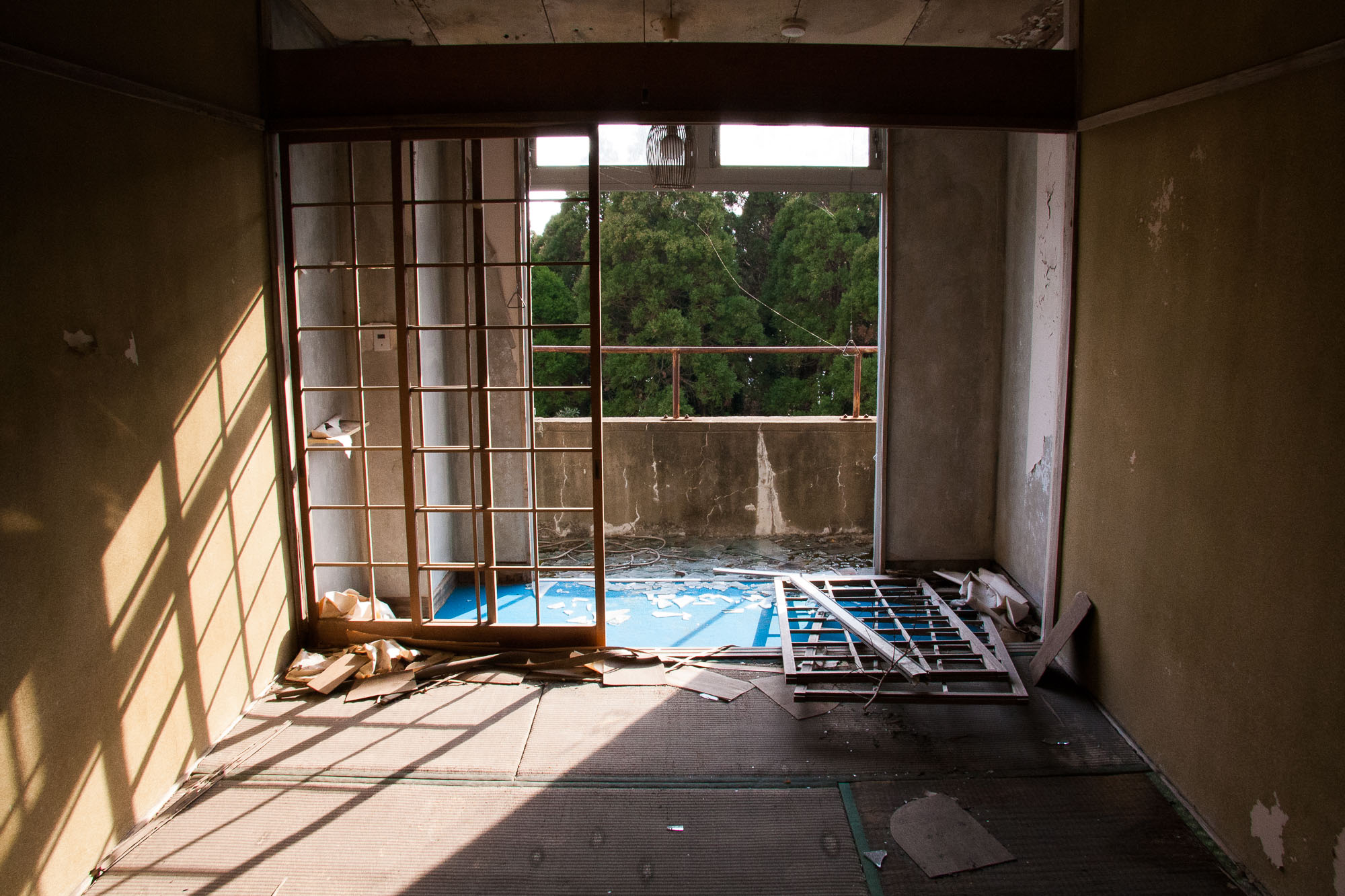 But unlike the other hotel, this one was easy to get into. None of the windows are boarded up; in fact, there are hardly any windows left. There is no security tape either, or signs warning against trespassing.

And for an abandoned place, it sure gets a lot of visitors. Among the pieces of splintered wood and broken glass that are strewn across most of the floor, we spotted empty beer cans, horse droppings, even an old shoe. Many of the walls are decorated with graffiti, too. 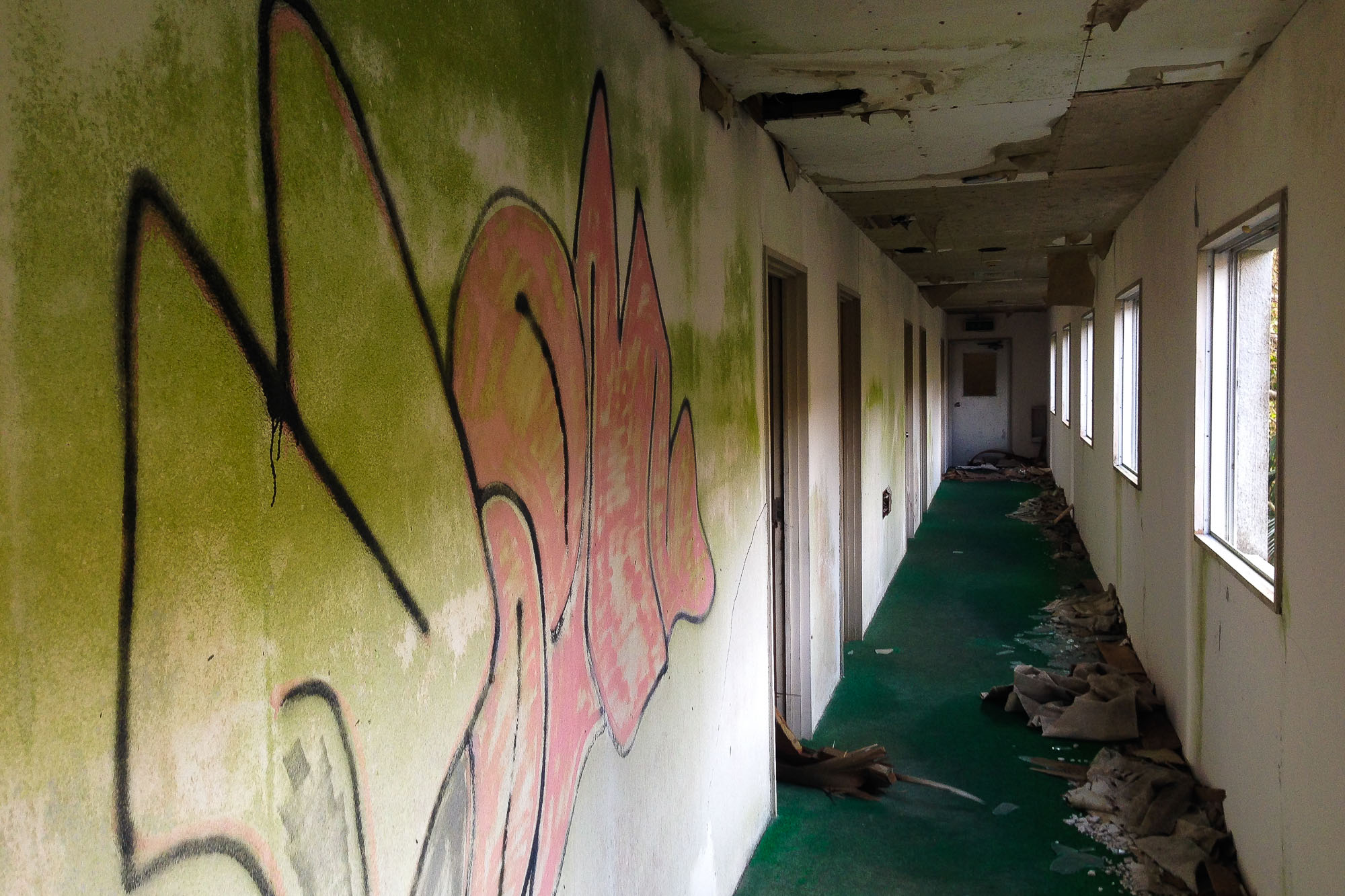 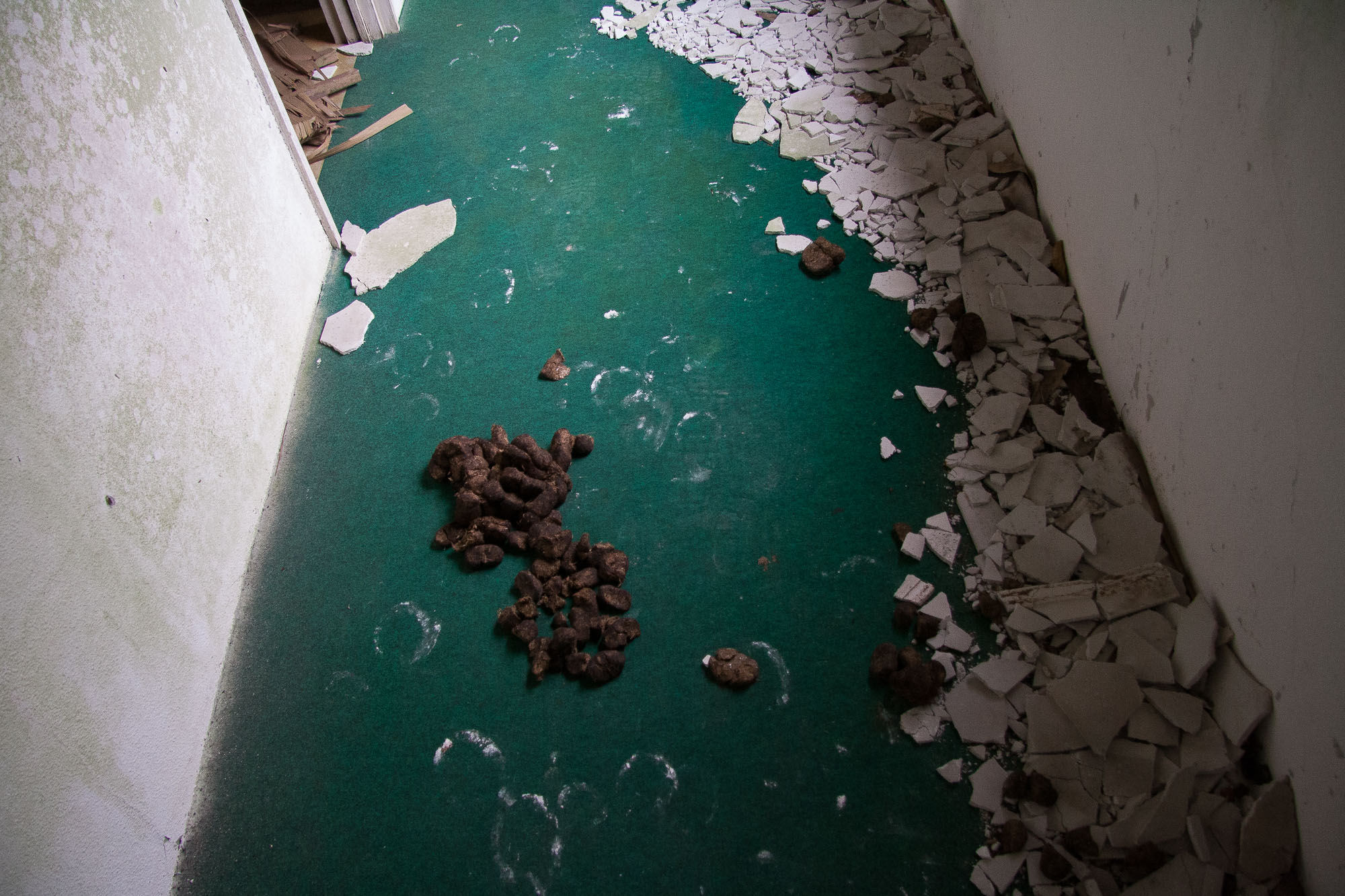 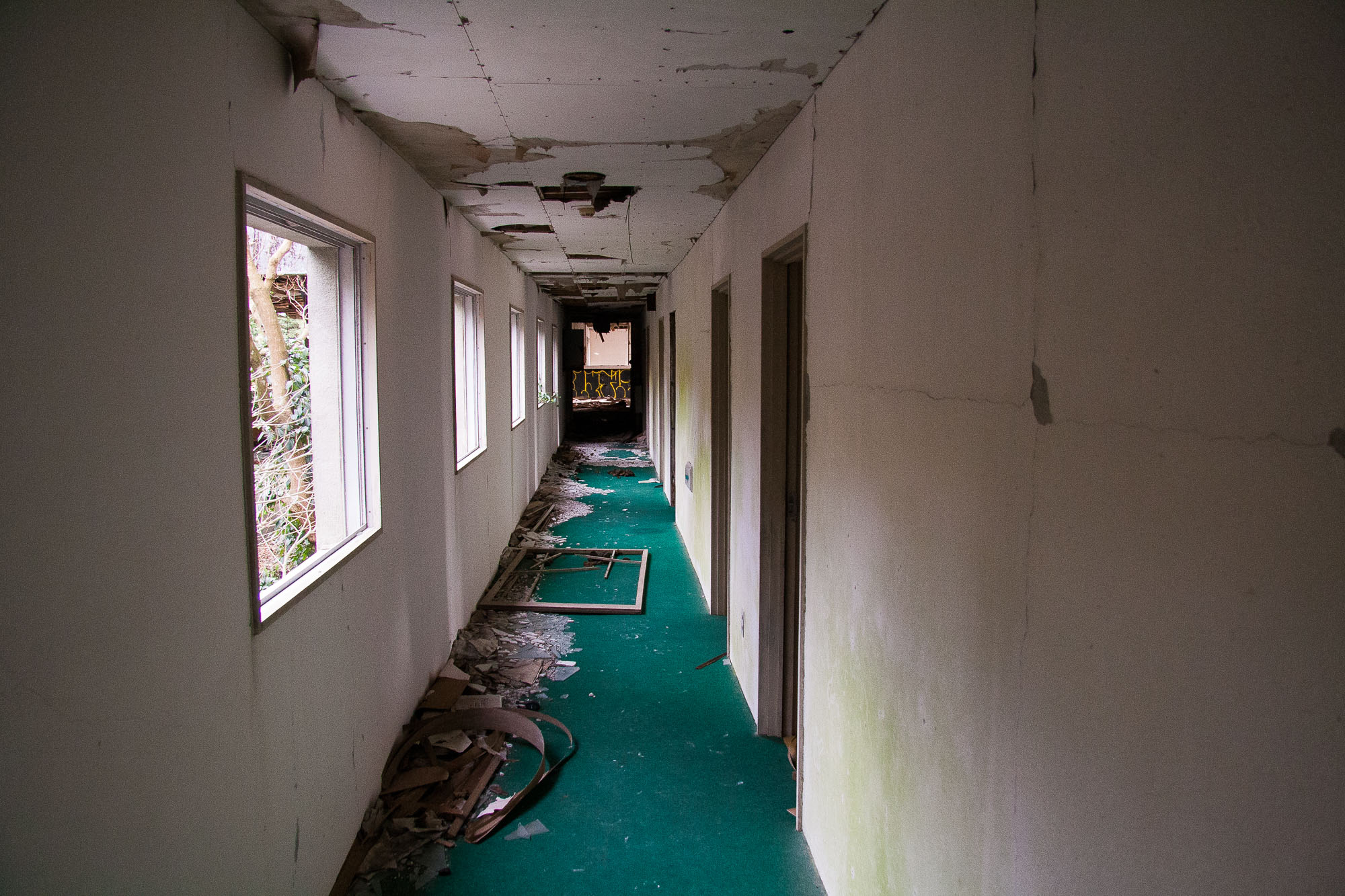 “This would be a great place to film a music video,” I said to Ian.
“Or throw an awesome house party!”
“Urgh…I would be so creeped out! Especially if there’s booze involved.”
“Really? I think I’d be less so.”
“I think it would be funny at first, then something really weird would happen and that’s when shit would hit the fan.”
“Yeah, I guess so.”

And Japan is all about the weird. Beyond the mental institution-themed restaurants, condom cookbooks, dead fish museums and drink-dispensing sex dolls, though, exists a darker world, filled with superstition and melancholy. 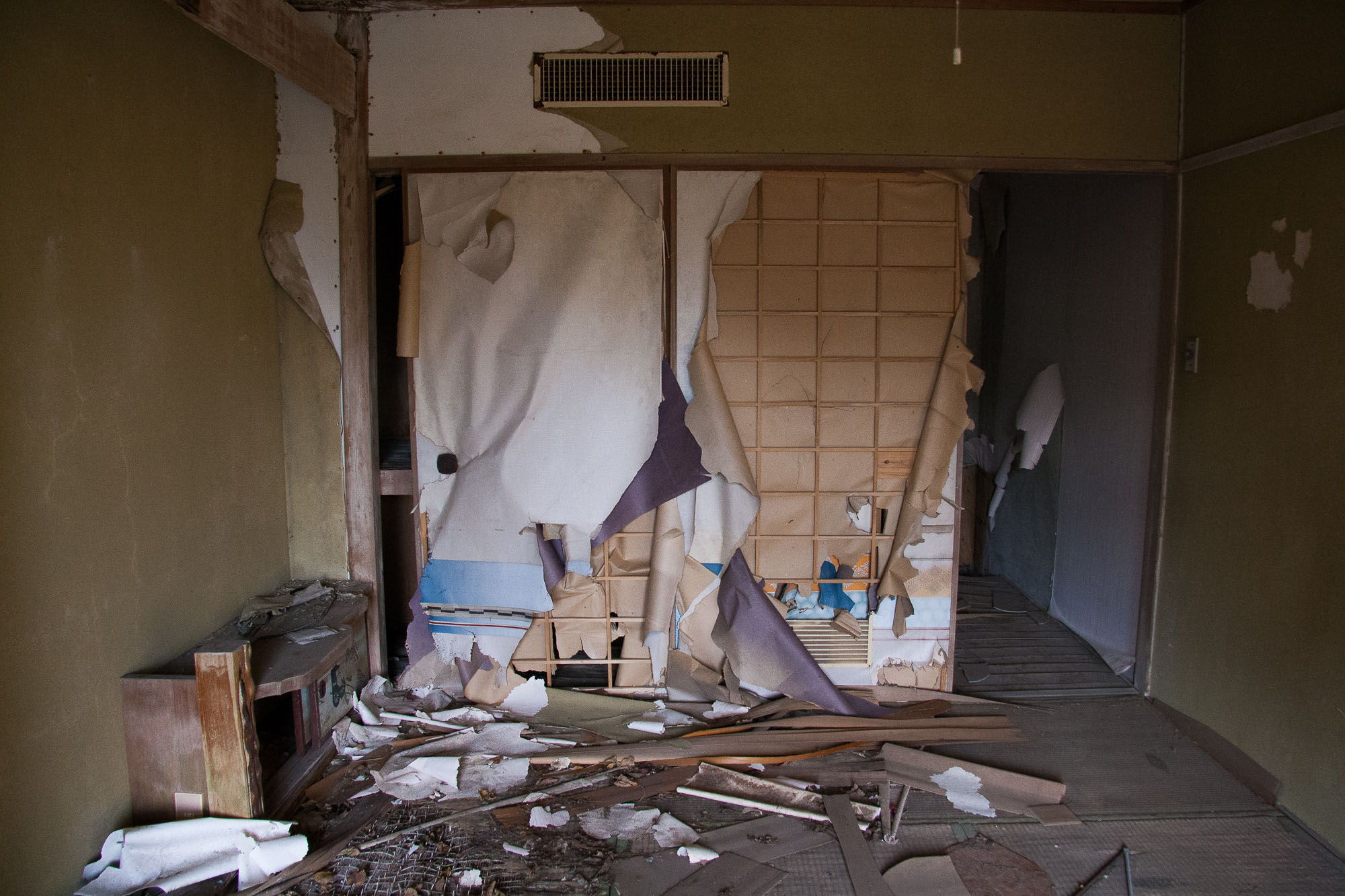 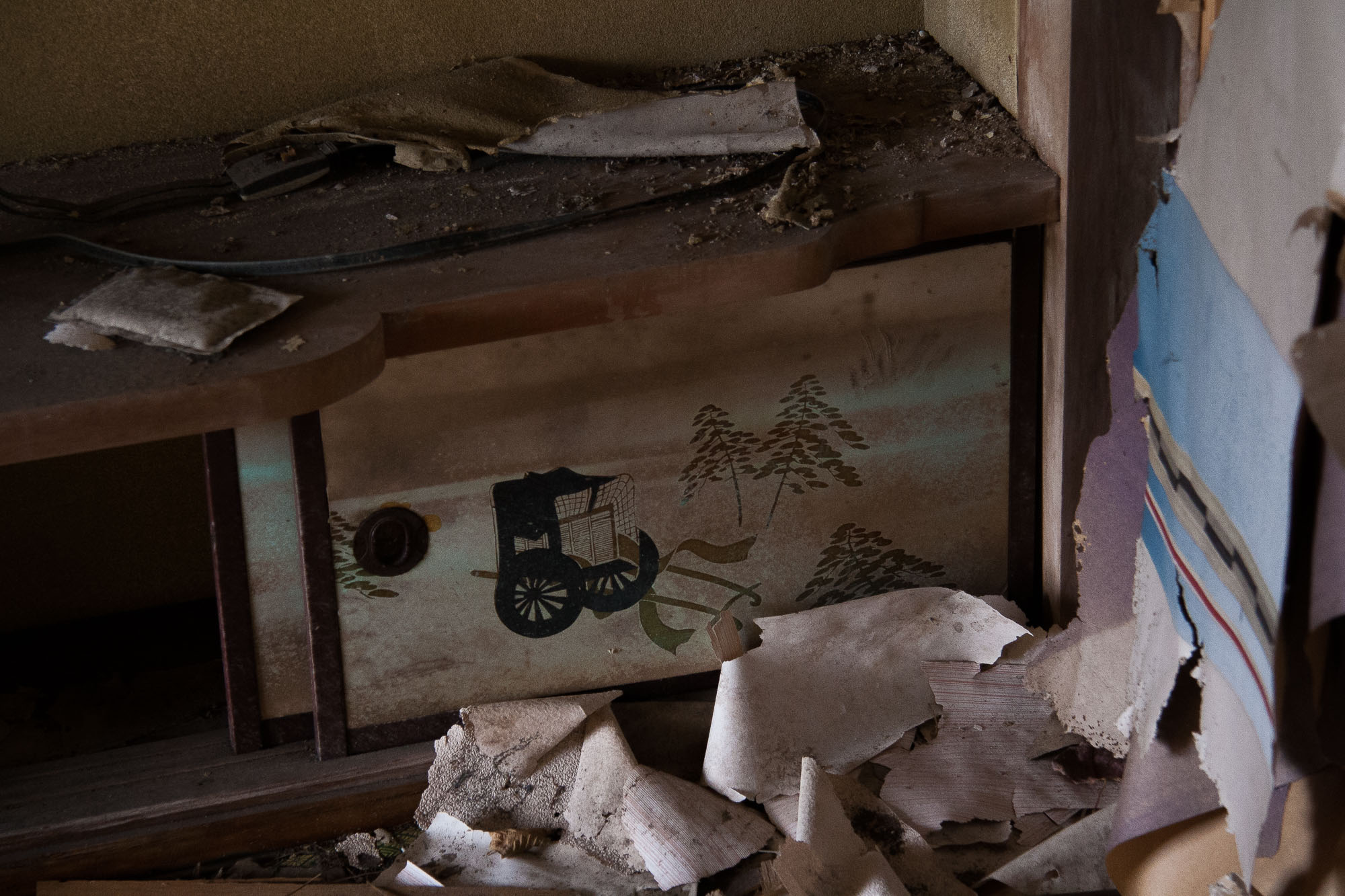 While the belief in the afterlife and supernatural beings is not unique to Japan, it’s one that is held by many Japanese. Which is perhaps one of the reasons so many places are deserted here – as of 2014, there were 8.2 million vacant homes in Japan, which accounted for 13.5% of all houses in the country at the time. By 2028, this number is expected to rise to 23.7%.

Other reasons are increased urbanization and the aging population. More and more youth are leaving their hometowns in the inaka for life in the big cities. They buy their own homes there, leaving the ones their grandparents hoped to bequeath standing empty – existing houses have no market value in Japan. Facilities in these small towns, like schools or hospitals, are also shutting down because there is no longer a demand for their services. 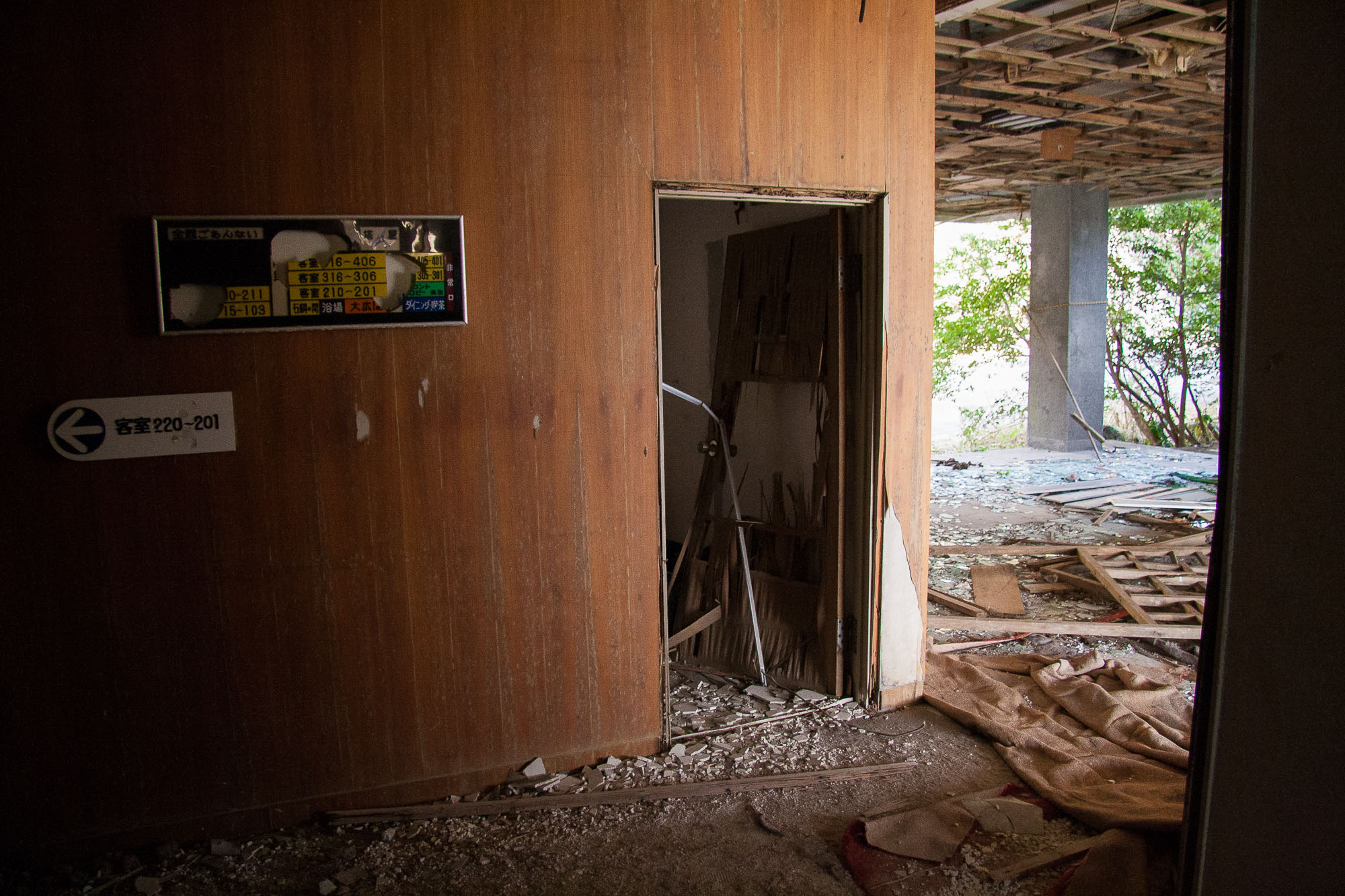 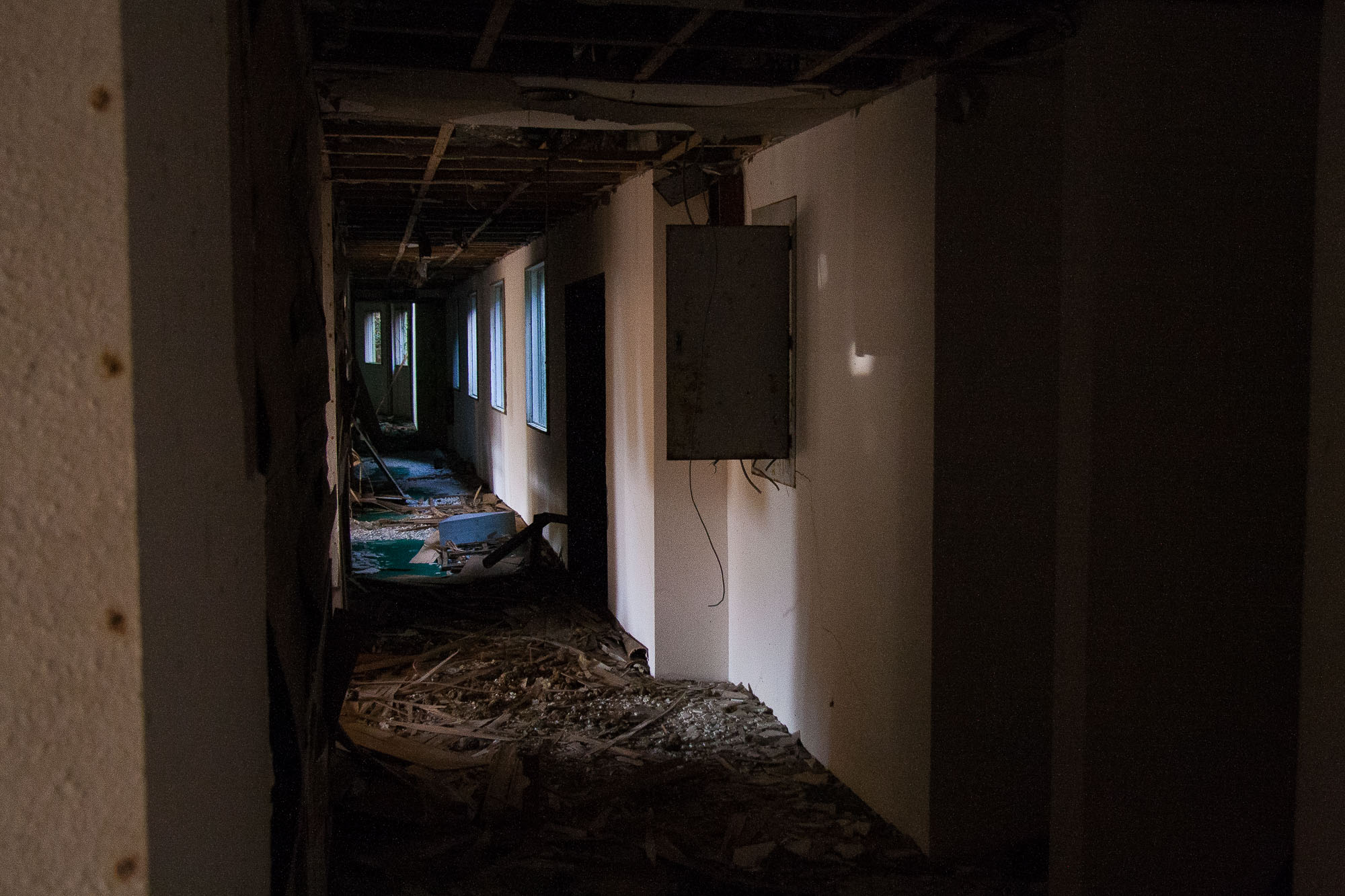 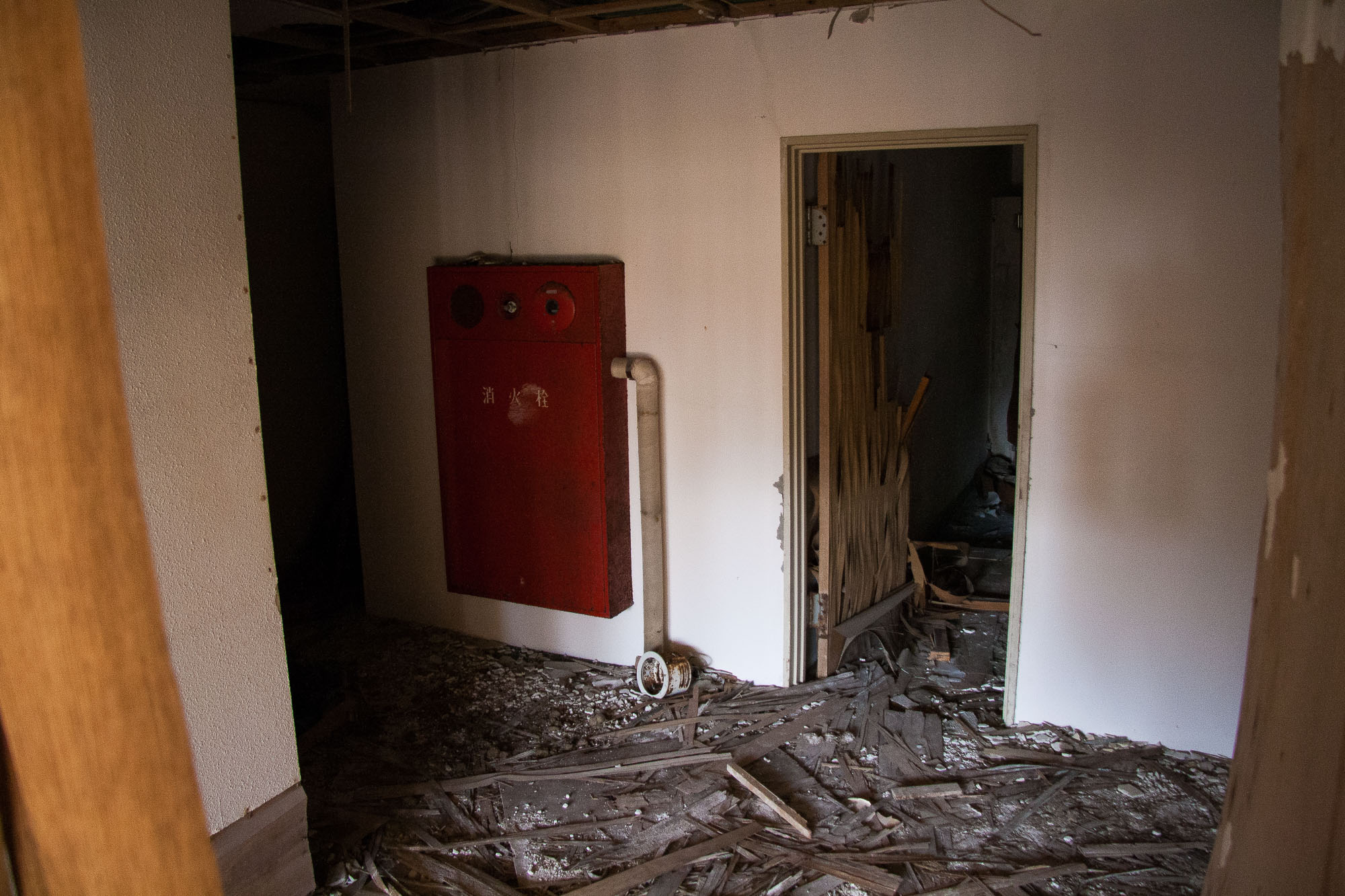 But most of the time it’s the government that ends up having to take on the financial burden. In Japan, the costs associated with demolition and clearing away debris are hellishly expensive – upwards of millions of yen. Homeowners simply cannot afford it, which is why a property is sometimes standing vacant in the first place. In order to avoid getting stuck with the bill, most local governments do nothing. 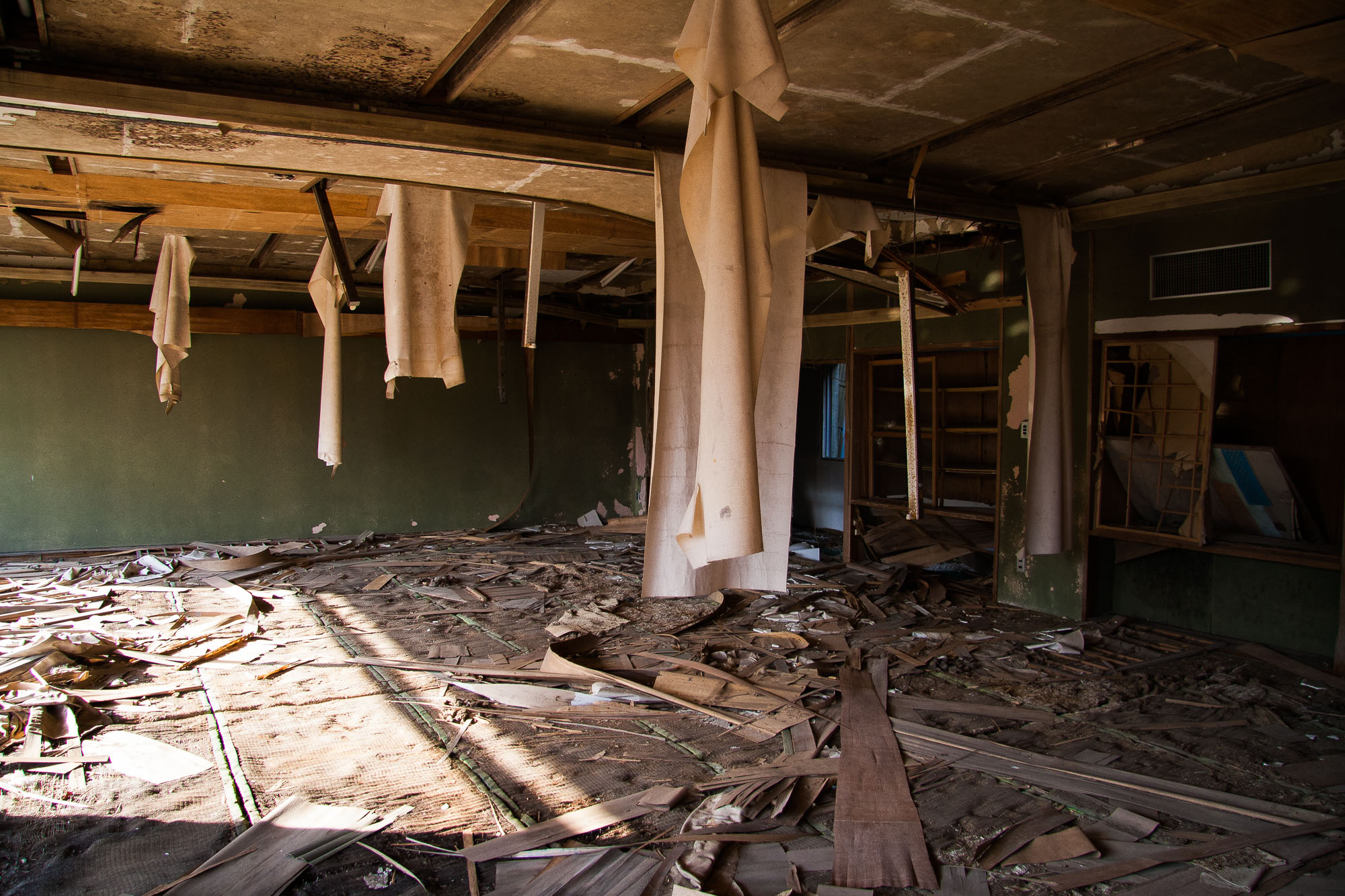 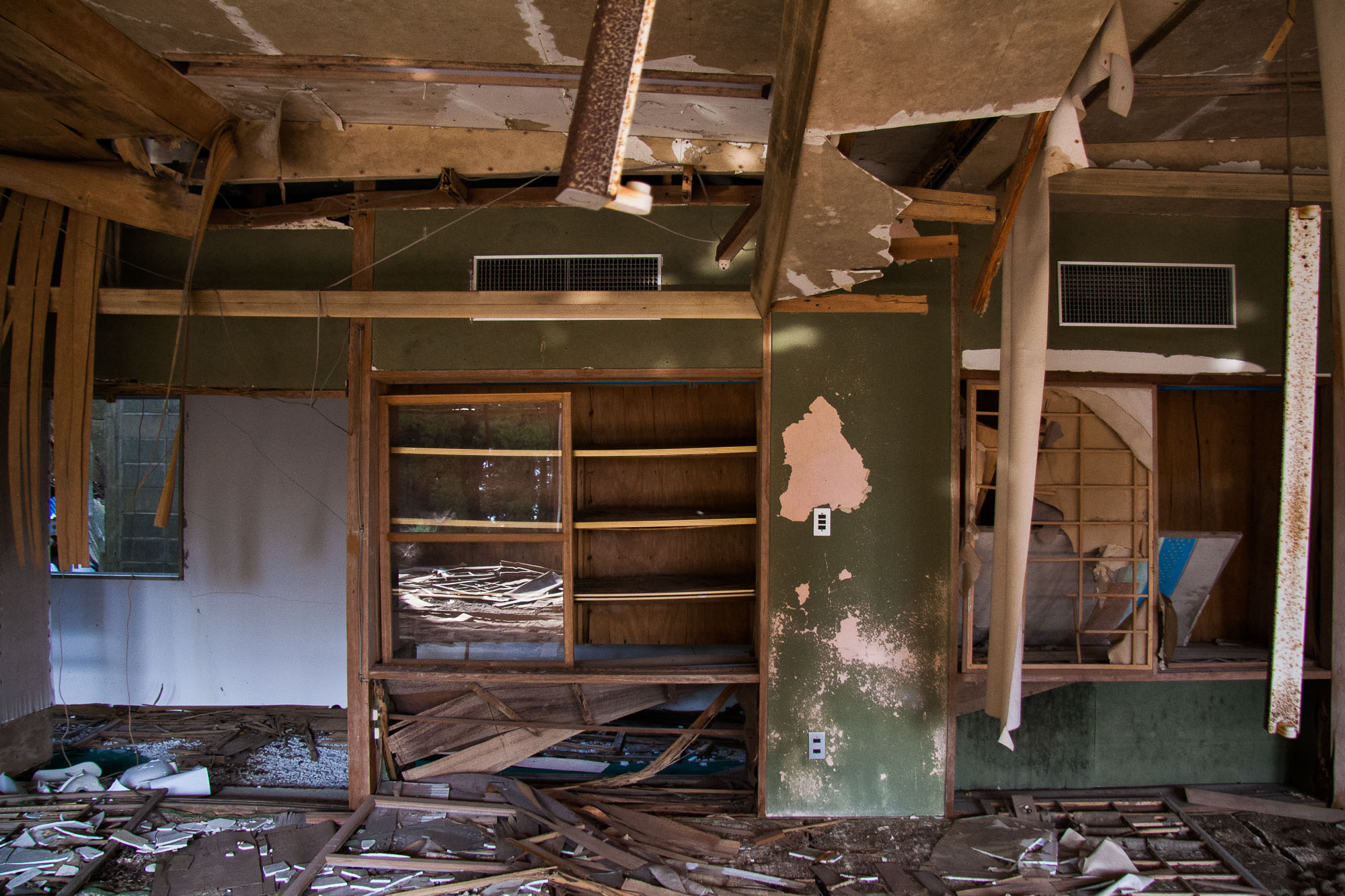 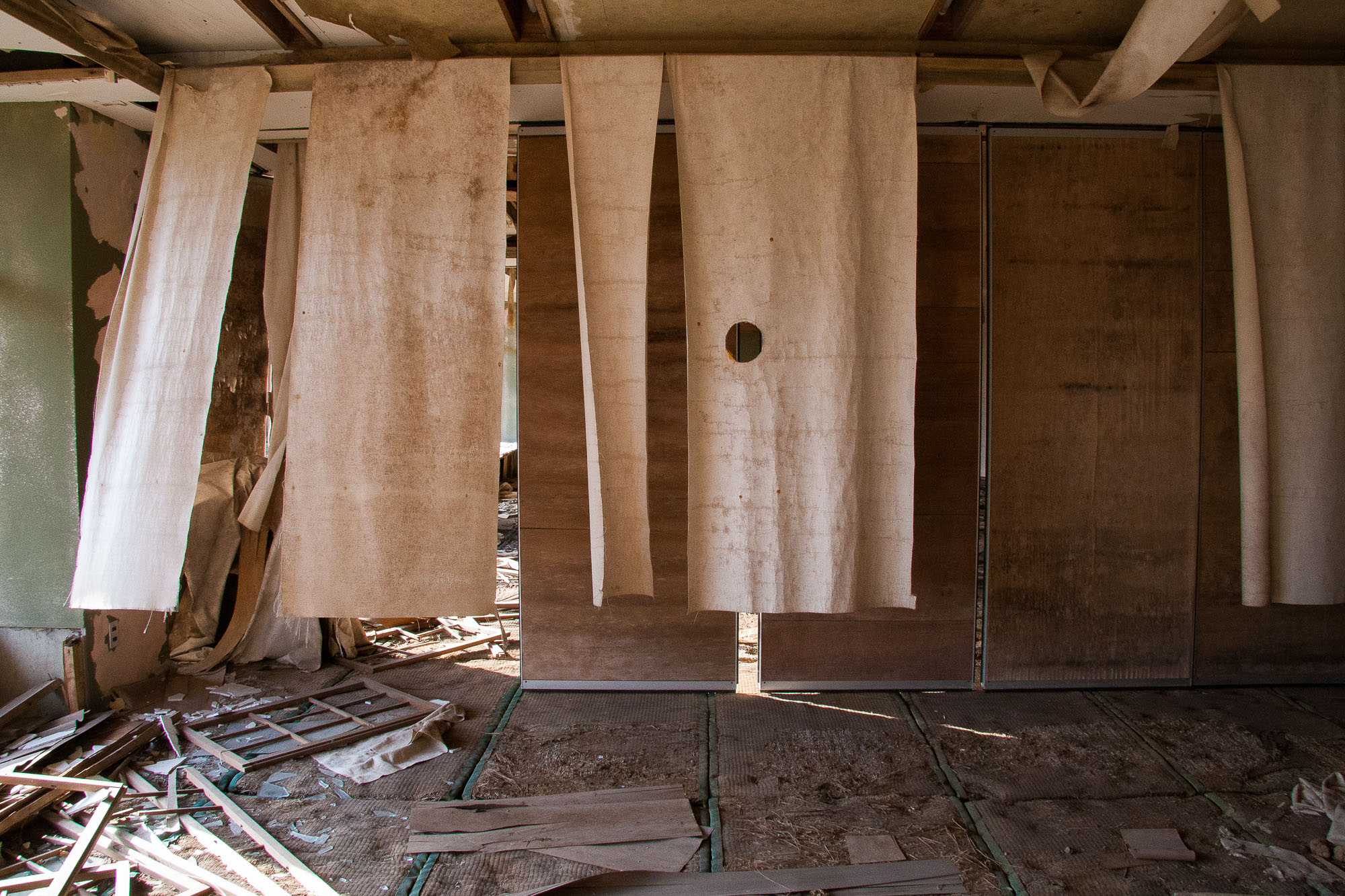 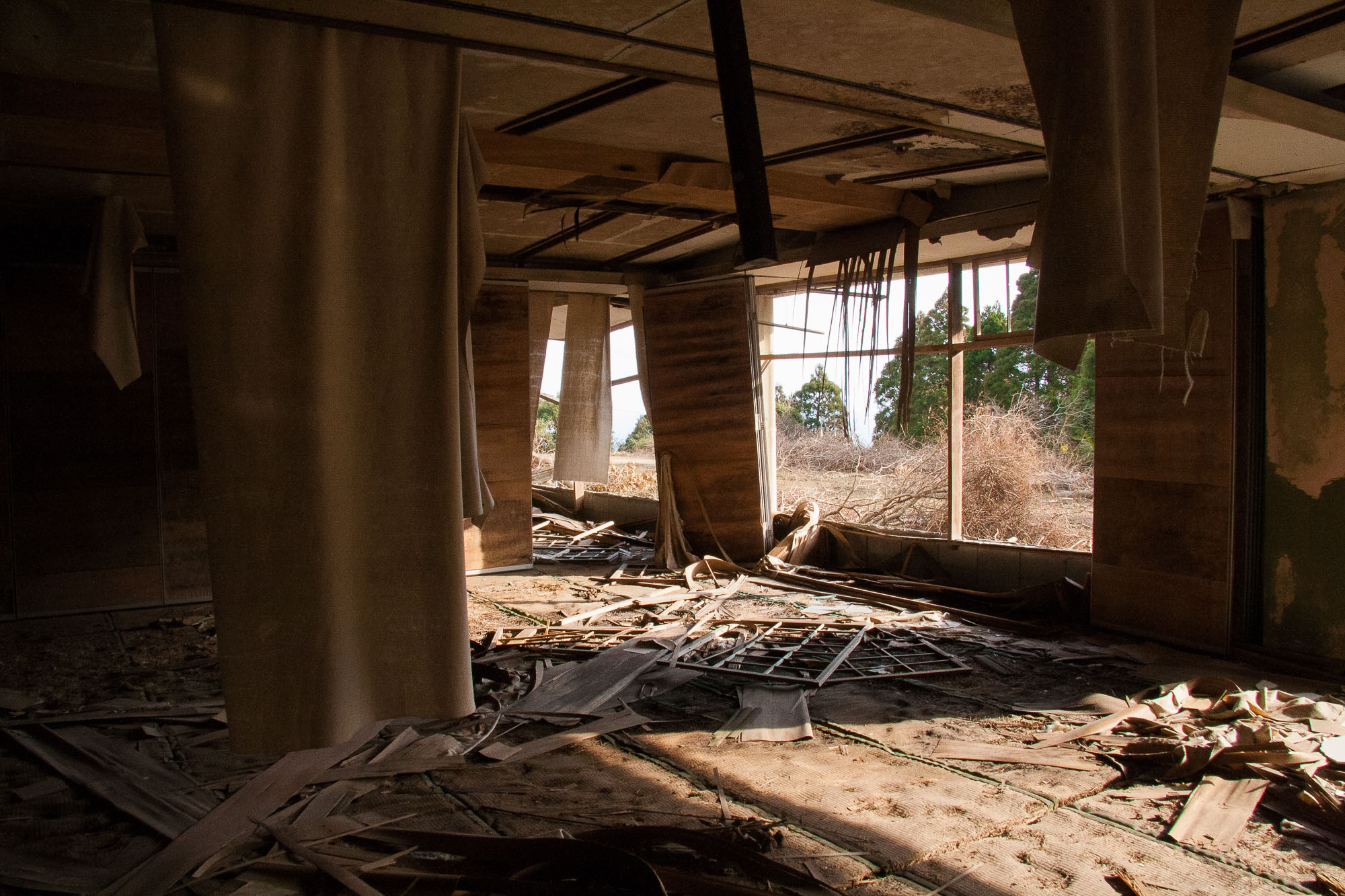 Moreover, the law has a special provision that allows homeowners to pay just one-sixth of the standard property tax if their plot has a structure on it. Many owners of land with vacant houses don’t want to see their tax bill increase sixfold after demolition, so they build new houses instead and leave the originals vacant, even if they are derelict.

As a result, the country is littered with abandoned apartments, bridges, military bases, mines, museums, offices, shops, amusement parks and hotels – a Mecca for urban exploration.

The word for the (controversial) hobby in Japanese is haikyo, which is also used to refer to the abandoned place itself. The most productive haikoyists in Japan – Jordy Meow, Michael Gakuran and Michael John Grist – have spent years adventuring through and documenting these ruins. 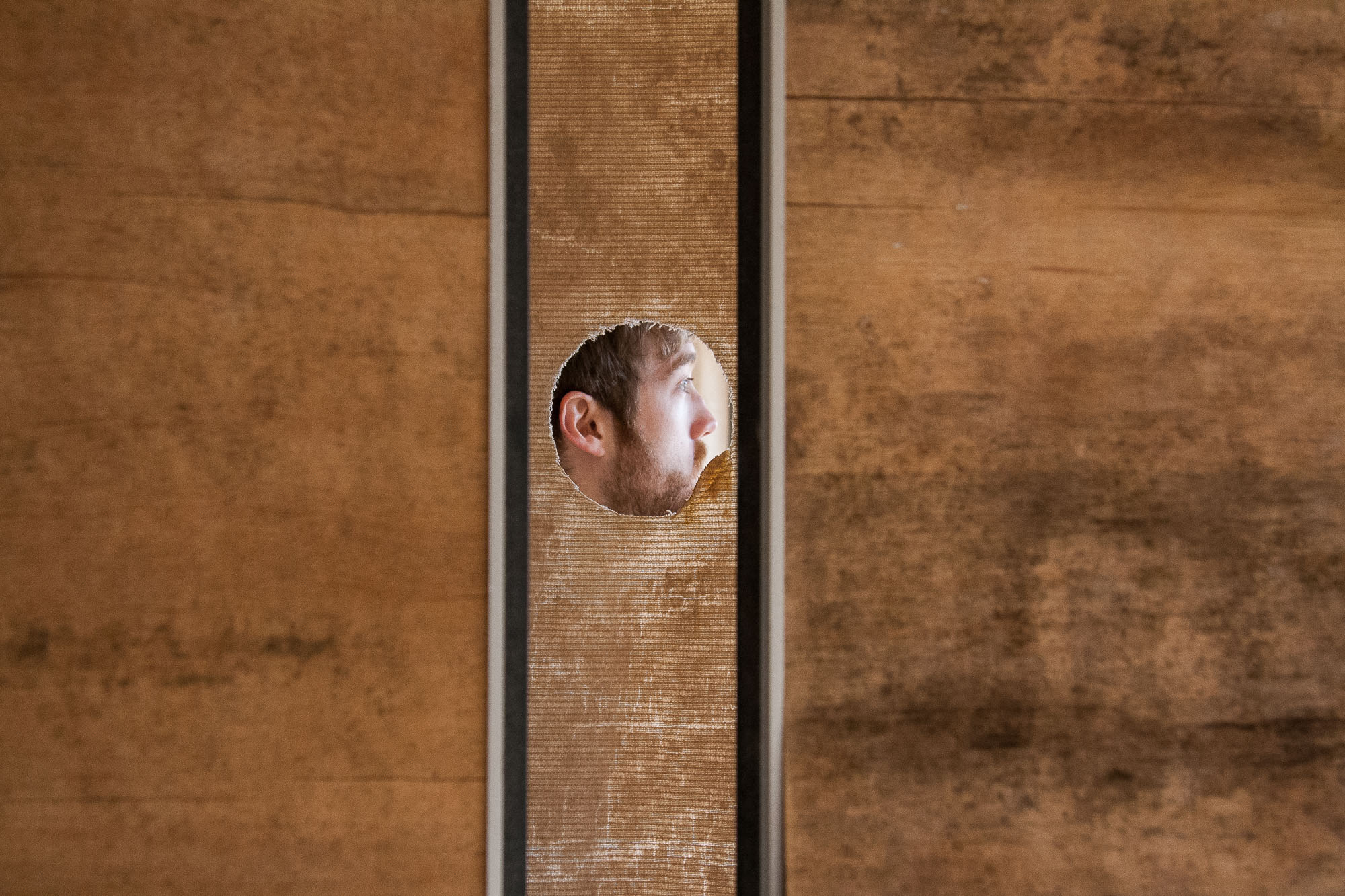 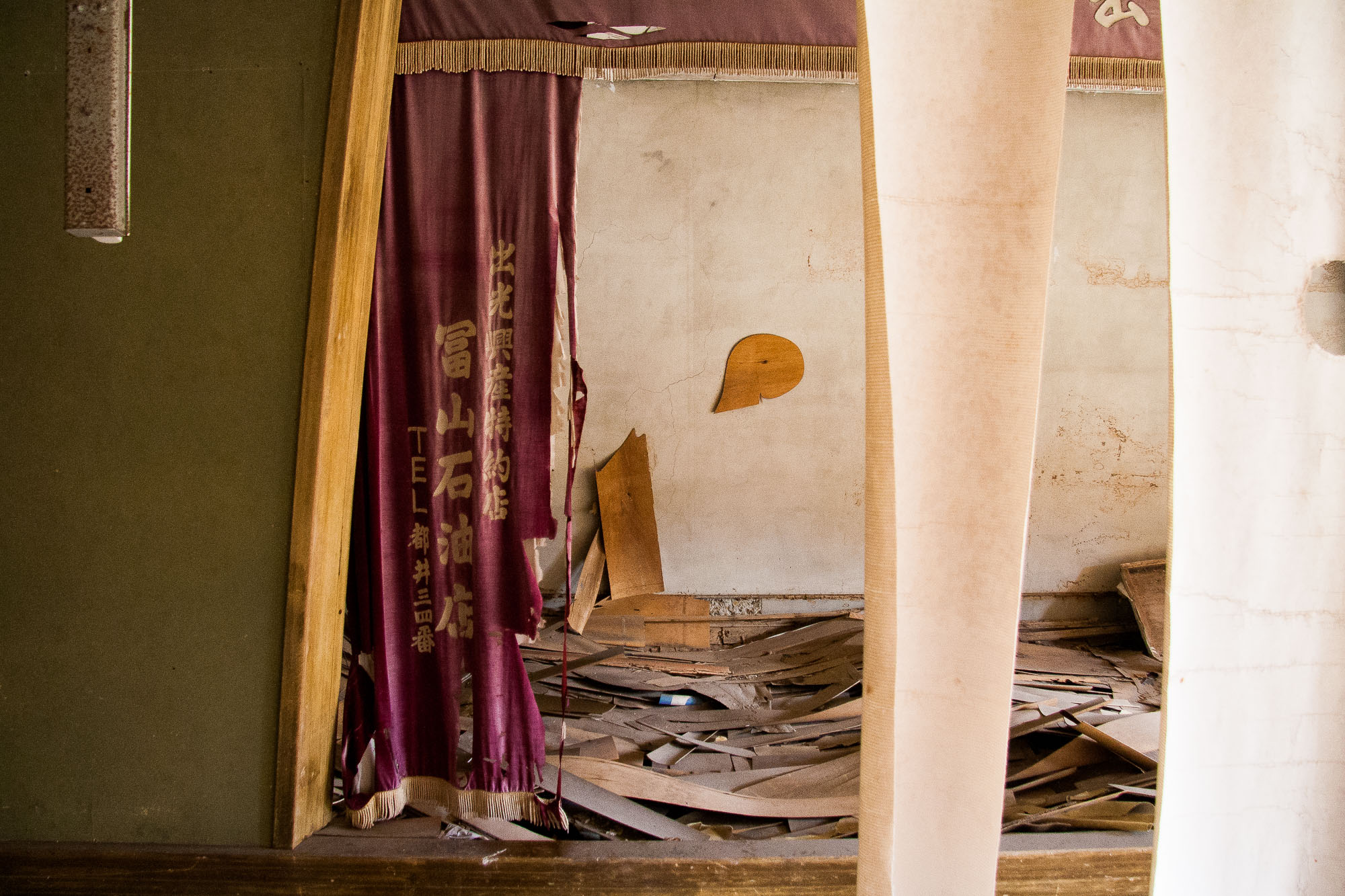 So what is our fascination with these kinds of places? Why are we drawn to death and decomposition, and why is it so hard to look away? What are we really looking for? I’ve mulled over these questions before, while hiking through Aokigahara, while gazing into cell after cell at Eastern State Penitentiary, and now, after traversing two floors of this hotel in Cape Toi.

Perhaps our morbid fascination is a form of self-preservation; the more we know of the horrors that might endanger us, the better equipped we feel to protect ourselves from them. Or maybe we’re just in it for the excitement and thrill, the cathartic release.

I align most with Carl Jung’s assertions, though, that we are less good than we imagine ourselves to be. Everyone carries a shadow, he says, and the less we embody these in our conscious lives, the blacker and denser they become. If we are consciously aware of them, they can be corrected, but if we repress and isolate them, they arouse psychoses.

As I watched the last of the day’s sun creep into what was once a bedroom, it finally began to make sense: in seeking out this darkness, we come, unexpectedly, to find the light. 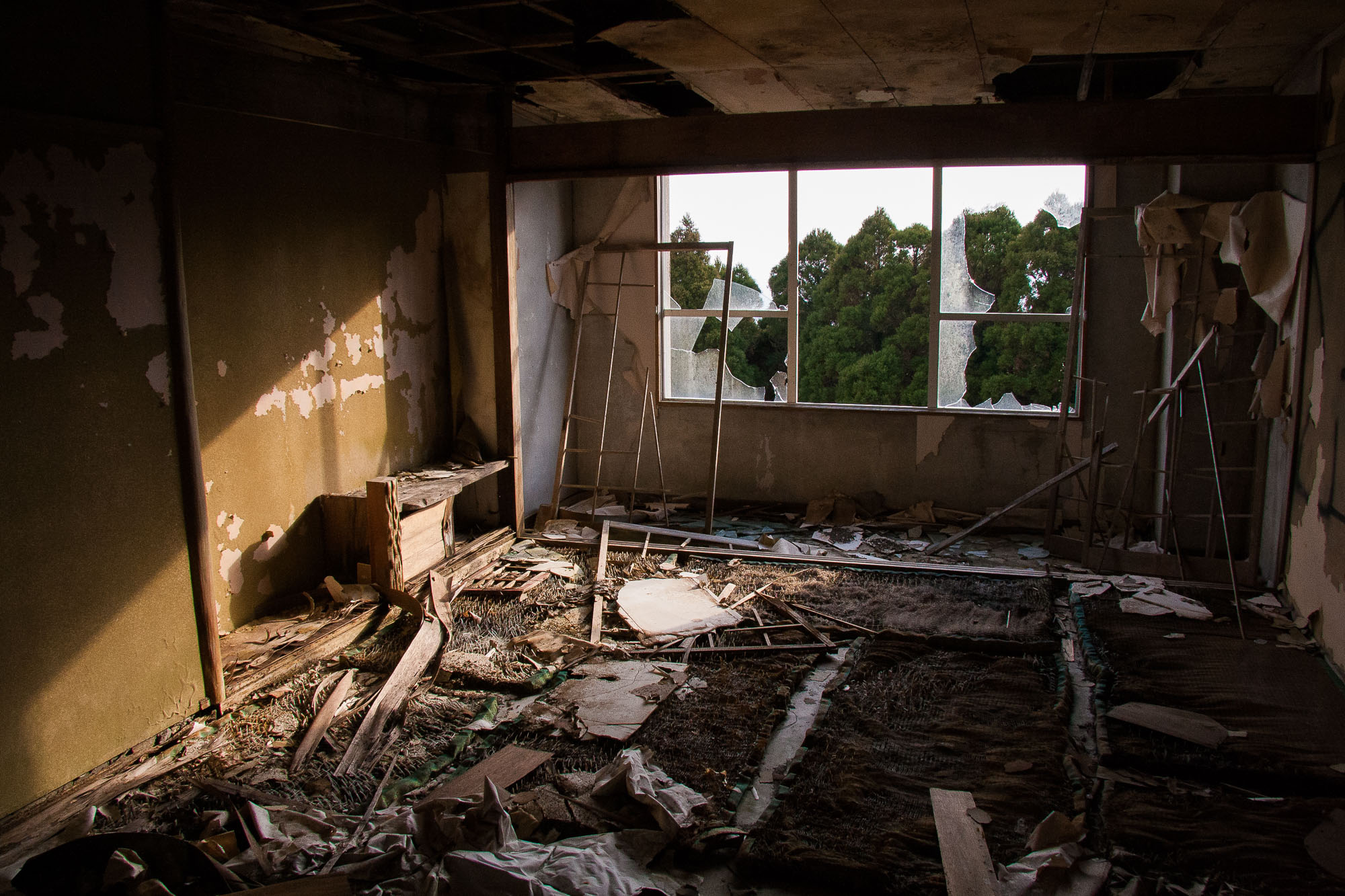