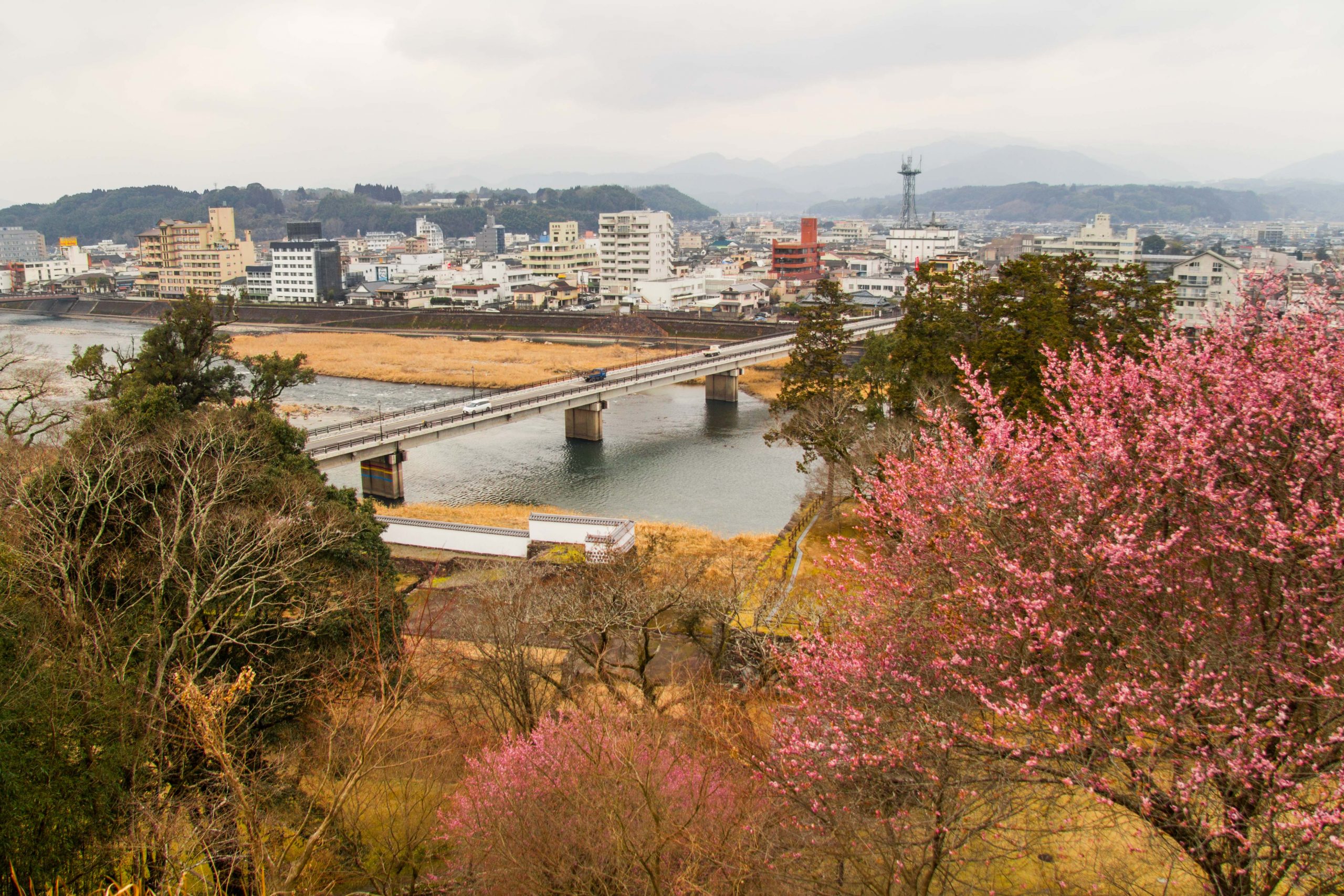 “Please visit Miyazaki again,” a sign reads at the entrance to the prefecture’s last tunnel burrowing through the Kyushu Mountain Range on Route 219. When you emerge on the other side, another one is waiting to greet you: “Welcome to Kumamoto!” It’s as if the passageway is a portal, transporting you to another world. And that’s exactly what Hitoyoshi feels like: a dreamy hidden town that’s come to life from the pages of a storybook.

Just a two hour’s drive from Miyazaki City, Hitoyoshi is located in southernmost Kumamoto, in a basin that’s enveloped in fogs from late autumn to early spring. Once a lake, the town is also an onsen resort, fed by the alkaline and carbonated hot spring waters that flow from rock layers containing fossilized trees.

More than 25 public baths are scattered around town and dotted along the banks of the Kumagawa. Flowing from its source in the Kyushu Mountains down to the Yashiro Sea, the 115 km-long (71 mi) river turns to powerful white water once it reaches Hitoyoshi, making it an ideal location for canoeing and an abundant source of ayu, or sweetfish.

River cruises down the Kumagawa are a popular attraction in the summer, when visitors can experience its fast-flowing rapids from traditional wooden rafts steered by local oarsmen. In the winter, a more tranquil course is available on boats equipped with kotatsu, or heated tables.

It’s said that river cruising in Hitoyoshi dates back to the Kamakura Period, when the Sagara clan were sent from Totomi Province (Shizuoka Prefecture) to take over the manor of the first shogun. Since feudal lords were obligated to split their time between Edo and their domain, river travel became an important mode of transport for the family..

The Sagara went on to rule Hitoyoshi for 700 years until the latter half of the 19th century when the town thrived as a bustling lumber port.. Today, it is called “Little Kyoto”; like its Honshu counterpart, Hitoyoshi is known for its many shrines and temples, traditional ryokan inns and age-old craftsmanship.

A stroll down Kajiyamachi-dori, an old blacksmith street, is perhaps most reminiscent of Japan’s former capital.  The cobbled road is still home to two metalworkers and is lined with old-style houses and buildings from the Edo period. It’s also the location of the Kamada Brewery, a local miso and soy sauce manufacturer.

Arguably more impressive are the ruins of Hitoyoshi Castle, the former home of the Sagura clan. A long flight of stairs leads to the ninomaru and sannomaru of the castle, which offer spectacular views of the town below. The beautiful, peaceful grounds are free to enter at any time of the day – a perfect spot for a picnic, quiet contemplation, or finishing off a good book.

The nearby Hitoyoshi Castle History Museum offers visitors a look at underground remains of the castle and historical materials related to the Sagara family, including armour and scroll paintings. Reconstructions of the fortification’s watchtowers and outer walls can be seen from the museum’s entrance.

A walk from here across any of the town’s three bridges leads to Hitoyoshi Station, the home of a restored tourist steam train that connects Hitoyoshi to Kumamoto, and a mechanical clock that resembles Hitoyoshi Castle. At designated times, different puppets and dolls pop out of the clock to the tune of a traditional Kuma folk song. The Tourist Information Center is located inside the building.

Plenty of restaurants are within walking distance. Local offerings include charcoal-grilled eel at Uemura Unagiya and pheasant at the further out Kijiya. Sweetfish is also on the menu at most establishments during the summer and autumn months. For Western tastebuds, Taverna da Mizumoto’s quattro formaggi is to die for and their crème brûlée does more than just pass.

Behind the station are the Omura Rock-Cut Tombs, a group of 27 burial caves that were cut into the soft hillside during the 6th and 7th centuries. Similar to burial mounds found in Japan, each cave has a tunnel-like entrance on its side. Above the entrances are intricate symbols that were carved ward off evil spirits.

Those interested in what a Japanese entity might look like can head over to Eikokuji Temple for a peek at its famous ghost scroll that hangs inside. Legend has it that, at the time the temple was built, a well-known samurai living in nearby Kinoe was keeping a mistress who, distraught over the jealousy of his wide, threw herself into the Kumagawa.

After her death, the mistresses’ torment lived on in the form of a ghost who taunted the samurai’s wife until she fled to the temple, begging for the help of its founder Jittei Chosin Osho. The priest drew a picture of the ghost who had begun appearing to him at night on the pond behind the temple. When he showed it to the ghost, she was so shocked by what she had become that she asked the priest to pray for her. Once he did, she was never seen again.

Eikokuji is just one of many temples and shrines in Hitoyoshi. Every year during the weeks of the spring and autumn equinoxes, religious pilgrims embark on the Sagara Kannon Pilgrimage, a 350stop circuit of the holy sites in the area.

Aoi Aso Shrine is the most revered of these sanctum. Built in 1609 by the Sagara clan, five of the temples buildings are designated national treasures. Their thatched roofing and intricate wooden carvings are exemplary of the Momoyama architectural style. The grounds are also home to a rooster and a couple of chickens.

Hitoyoshi is also a haven for nature lovers and outdoor enthusiasts; the rapids of the Kumagawa provide excellent conditions for river rafting, and the adjacent Kumagawa Cycling Road offers cyclists and runners 30 km (18.6 mi) of unobstructed path all the way to the town of Yonomae. A short hike away is the Kaname Falls, one of the top 100 in all of Japan.

After adventuring and exploring, visitors can relax in one of Hitoyoshi’s many hot springs.  The Ohga Onsen is a local hangout that’s clean, cheap and easy to use. Simply get a ticket from the machine at the entrance and pop it into the box on the counter before heading in. The spa is open 24 hours a day, 7 days a week and costs just 300 円 ($2.65) to enter.

A tumbler of kuma shochu may also help you unwind. Hitoyoshi’s unique version of the traditional Japanese liquor is distilled using subsoil water from the Kumagawa. The Sengestsu Shuzo Distillery uses rice to make their kuma shochu which you can sample on one of their free factory tours. For those short on time, Omiyage Ao Yagi opposite the station carries a good selection from different breweries in the area.

Almost all of the gift shops in town sell handcrafted kijiuma (wooden bird wheel-toys), hantebako (camellia-motif boxes) and hagaoita (wooden paddles for badminton) which are also unique to Hitoyoshi and make excellent souvenirs. Visit Mukashi Mukashi on the edge of town for a more eclectic range of local goods, or try your hand at making something yourself at the Hitoyoshi Craft Park.

There’s plenty to see and do and almost everything is within walking distance of the station, making Hitoyoshi the perfect place for a weekend getaway. Whether its relaxation, culture or adventure that you seek, you are sure to find it here.

Hitoyoshi is a terminal stop on the JR Hisatsu Line. For train routes to and from the town, click here.