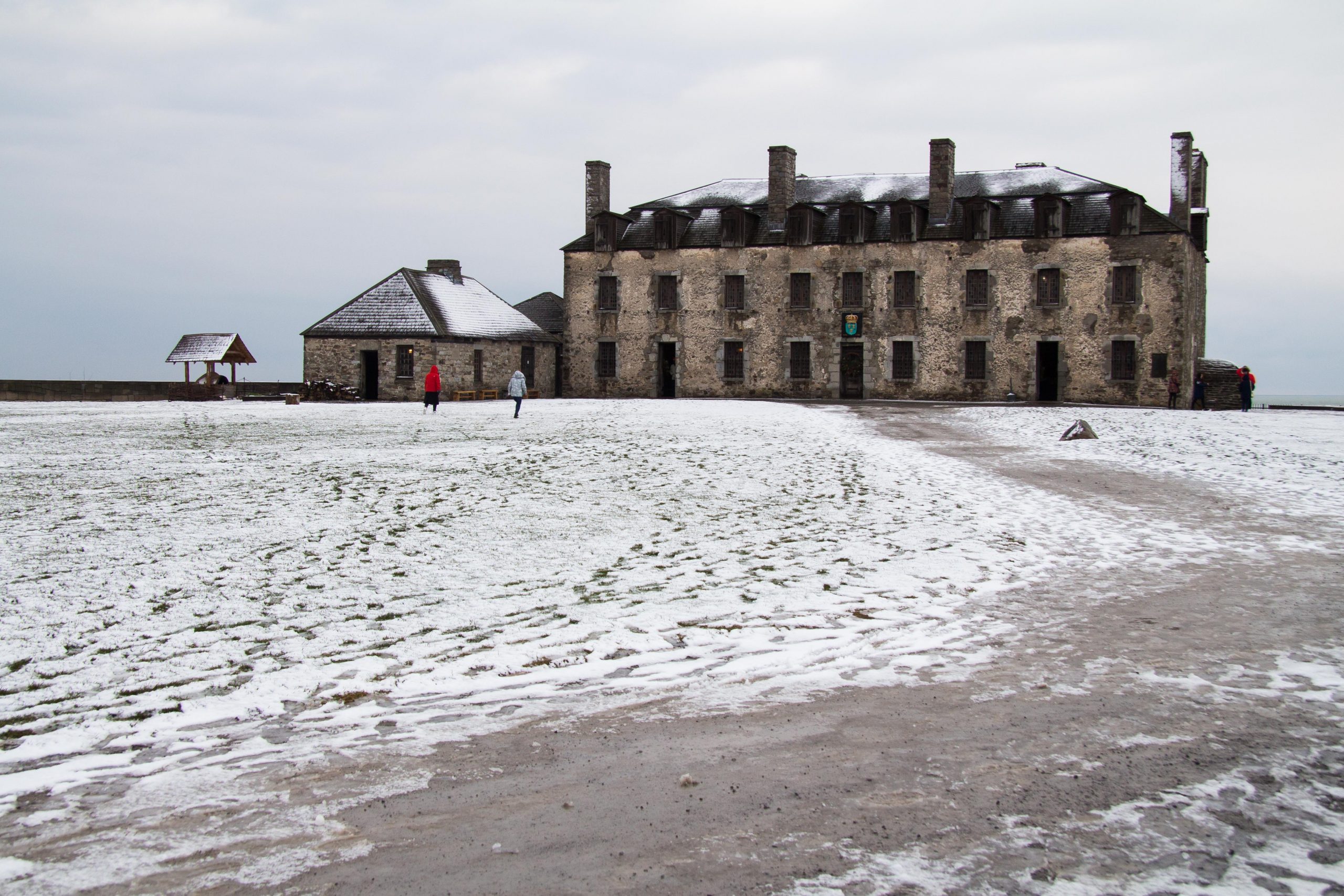 “It’s snowing!” I yelled excitedly over my shoulder, peeking through the curtains. “Oh yeah?” my sister responded with mild disinterest. You’d swear she never grew up in Johannesburg. The fluffy white stuff still excites me; I’m lucky if I even get to see it once a year.

We packed up the last of our things and headed for the bus, which ambled through the fresh snowfall to Niagara Jet Adventures. A ride on one of the company’s customized jet boats down the Niagara River costs $61 (and 45 minutes of nausea), which we weren’t willing to part with in the cold. We huddled around hot coffee and chocolate muffins in the waiting area instead and made friends with a nice family from Croatia.

The next stop on the tour was a lovely surprise. I had somehow missed on the itinerary that we would be touring Fort Niagara, a French castle with a 300-year history. I just love a good museum. 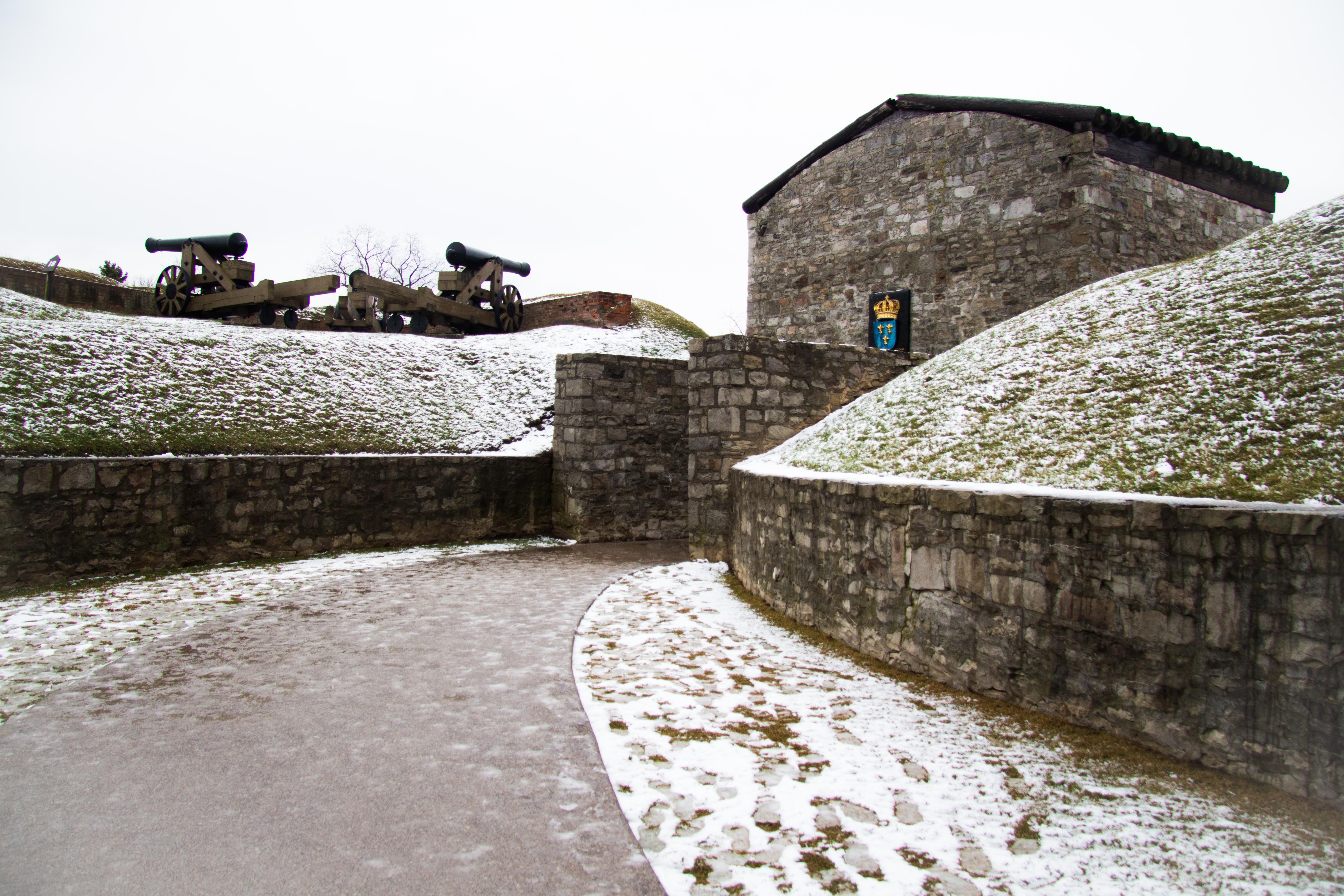 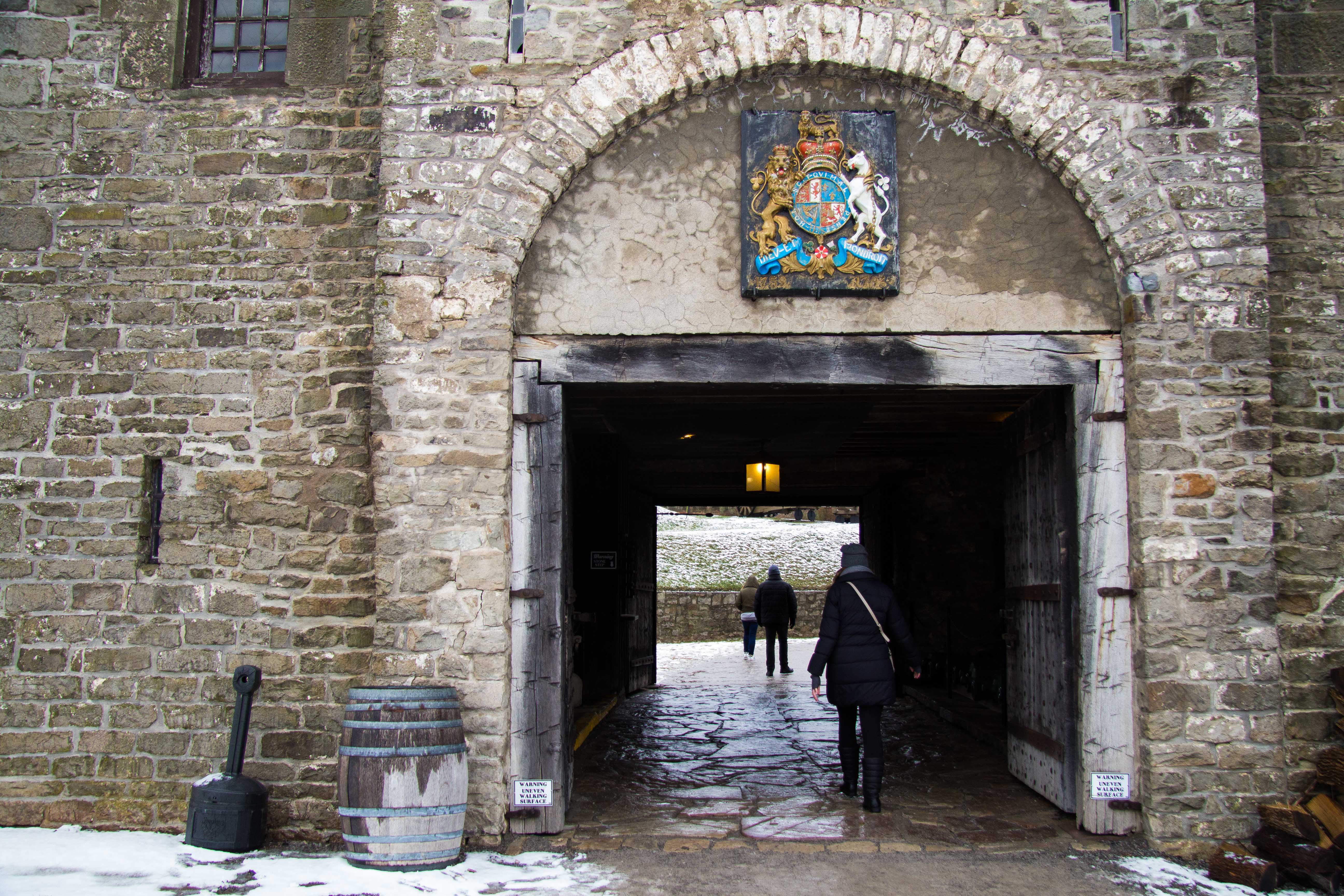 The British, Dutch and French settled on the shores of North America around the same time during the colonial wars, but the latter were in the best position to exploit the routes to the interior, since the St Lawrence River led straight from their settlement to Lake Ontario. Their only obstacle was the Five Nations of the Iroquois, who were located next to the Lake.

Despite being at was for several parts of the 17th century, the Iroquois granted permission to the French to use the Niagara portage. In 1670, the explorer and trader René-Robert Cavelier, sieur de LaSalle established a small post called Fort Conti to store supplies for the ship he was building to use on the Upper Great Lakes.The ship was completed in the spring of that year but sometime after LaSalle departed, Fort Conti burned down in an accidental fire.

When tensions between the French and Iroquois began to mount again, the Governor of New France established a fort in the same location to control the Seneca (the westernmost of the Iroquois nations) secure the portage and also deny access to the British, who had a growing interest in the Iroquois country. 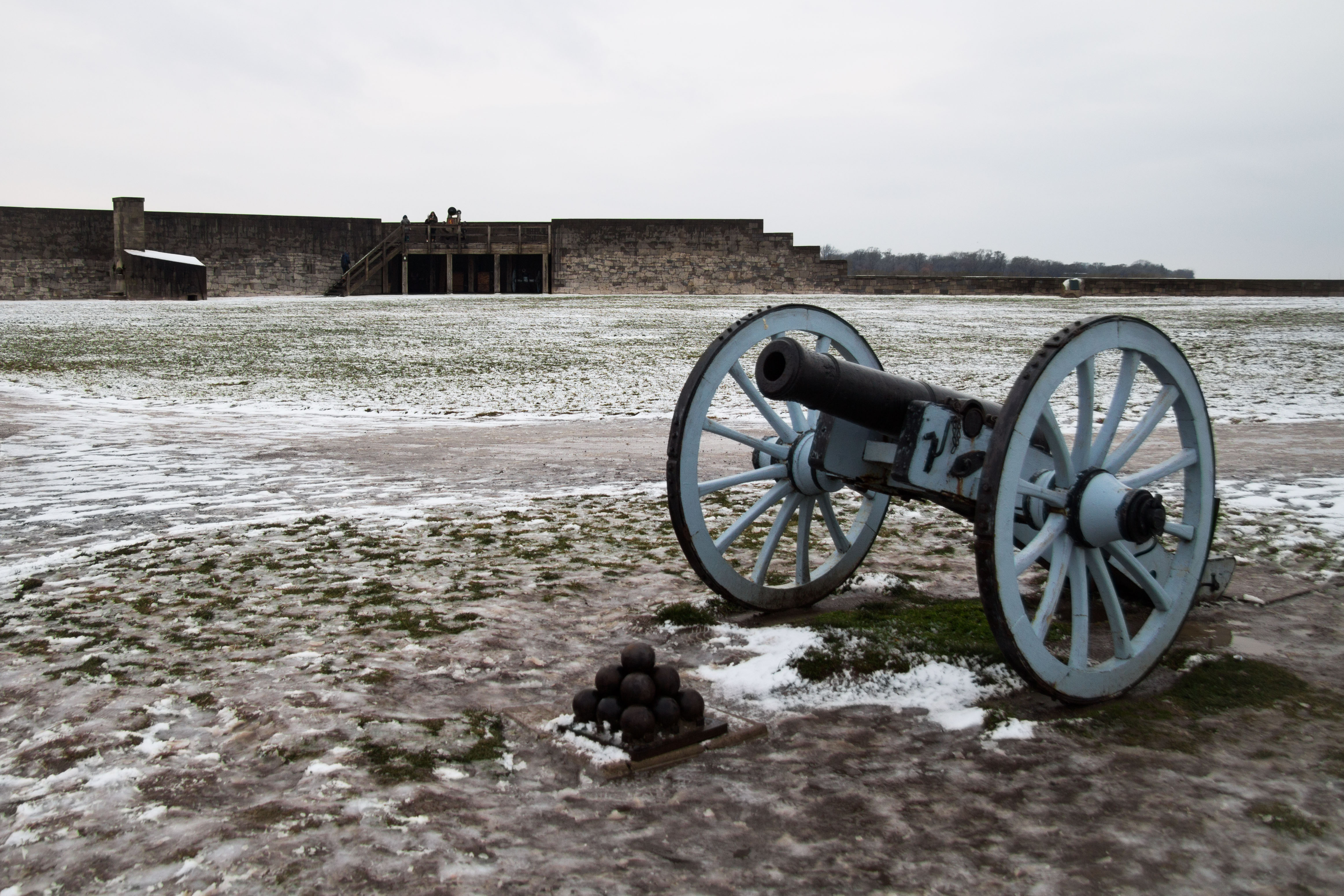 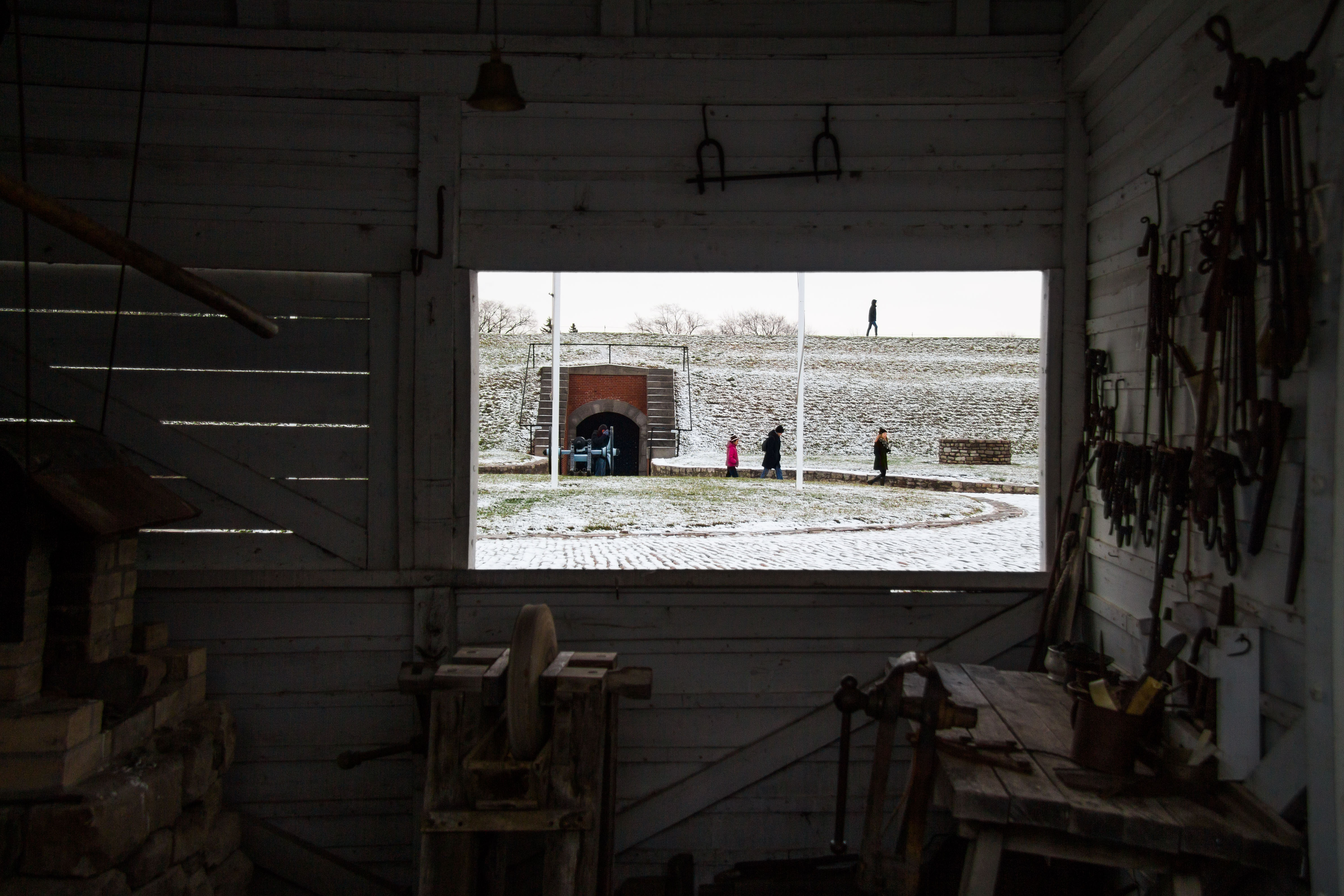 It was named Fort Denonville and left to be guarded by a garrison of 100 men when the Governer withdrew to Montreal. But Seneca warriors hovered near the fort, isolating the troops who eventually succumbed to disease and starvation. By September 1688, the post had been abandoned.

The French later shifted their focus to native tribes beyond the control of the Iroquois. As their relations with Britain deteriorated back home, their North American rivalry with the British grew more and more intense. Both nations viewed Niagara as imperative for securing access to the Great Lakes and the fur trade.

In the second decade of the 18th century, the French sought to re-establish themselves at Niagara. Construction of a permanent fortification, the “French Castle”, began in 1726 and was completed a year later. After a 19-day siege during the French & Indian War, Britain gained control of Fort Niagara in 1759. 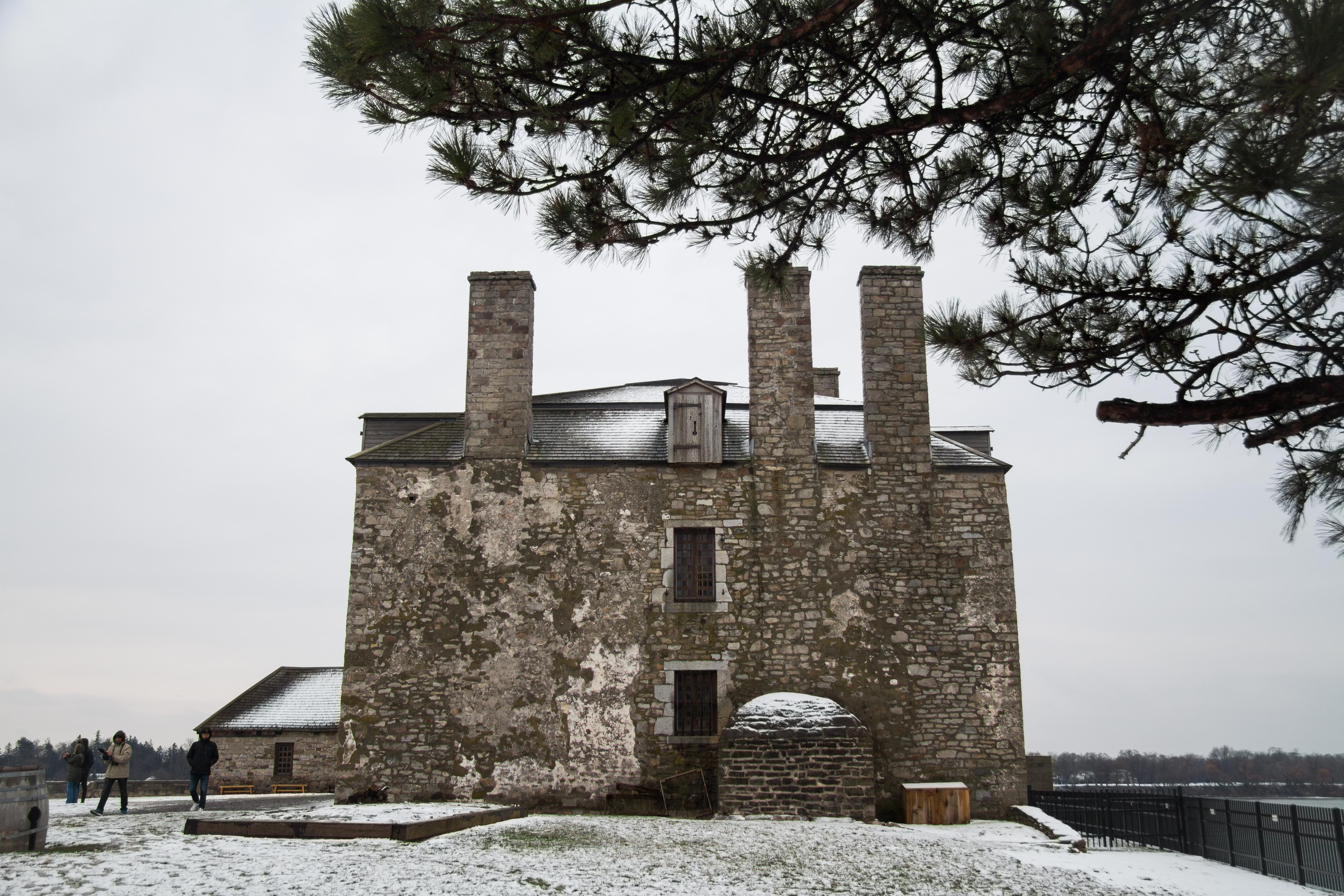 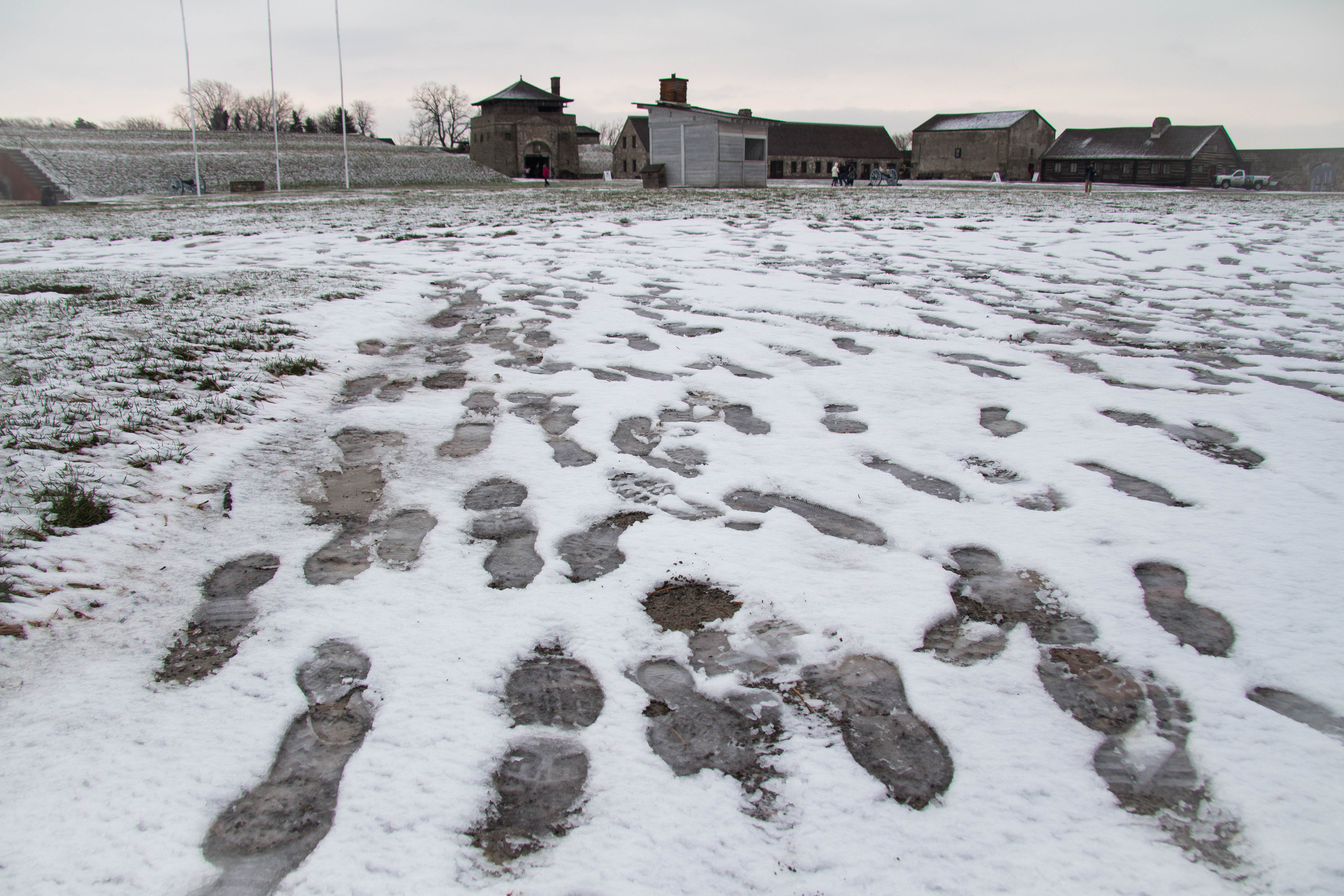 They held the post throughout the American Revolution, but were forced via treaty to give it up to the United States almost four decades later. Fort Niagara was recaptured by the British in 1813, and ceded to America for a second time at the end of the War of 1812.

Fort Niagara served thereafter as a peaceful border post and as a barracks and training station for American soldiers during World War I and II. The US coast guard is the only military presence left on the site today.

Visitors can tour the original 18th century buildings and experience the lives of the soldiers  who lived and worked at the fort through re-enactments. We were greeted by a man in period dress toting a musket which he warned might not fire in the cold. 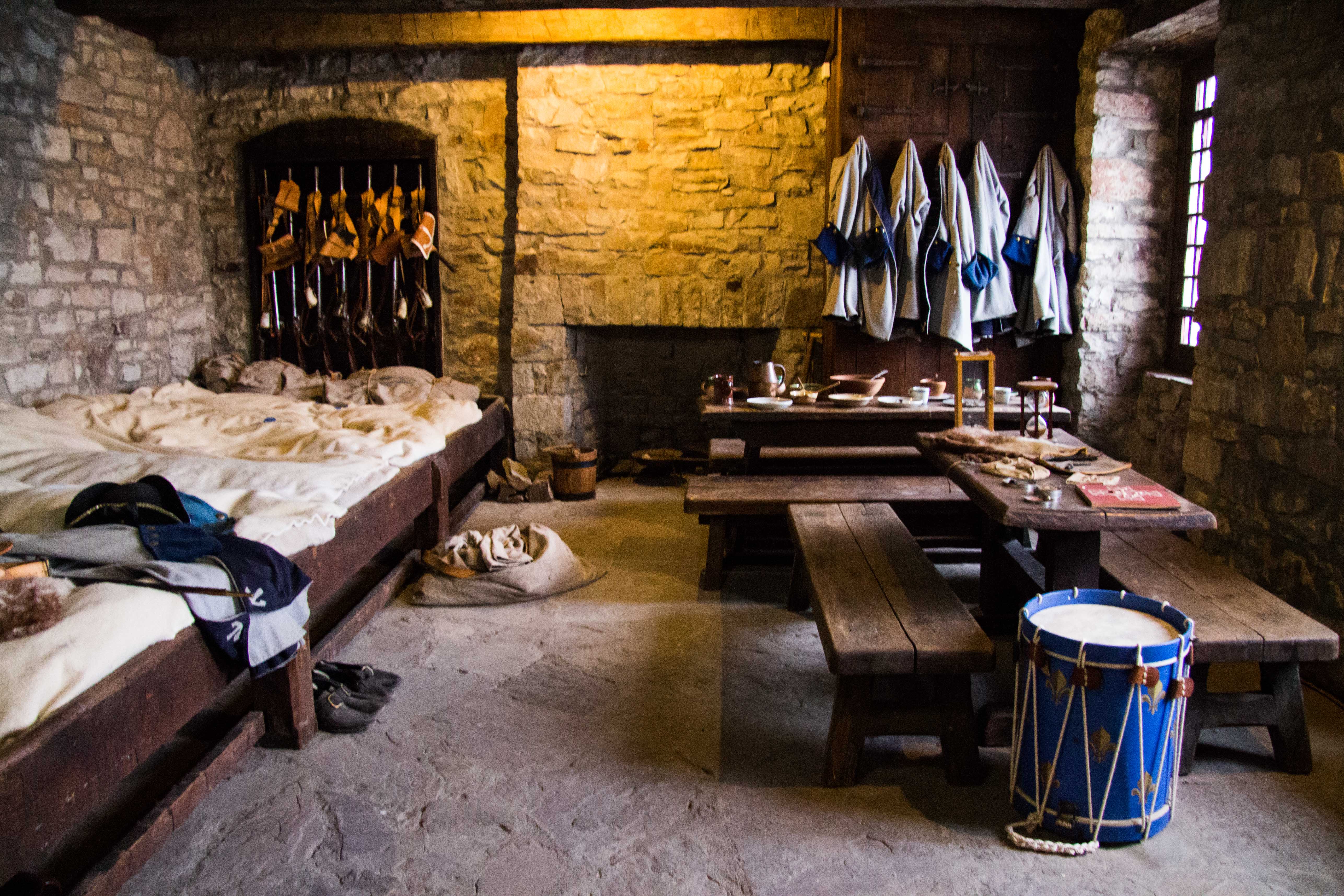 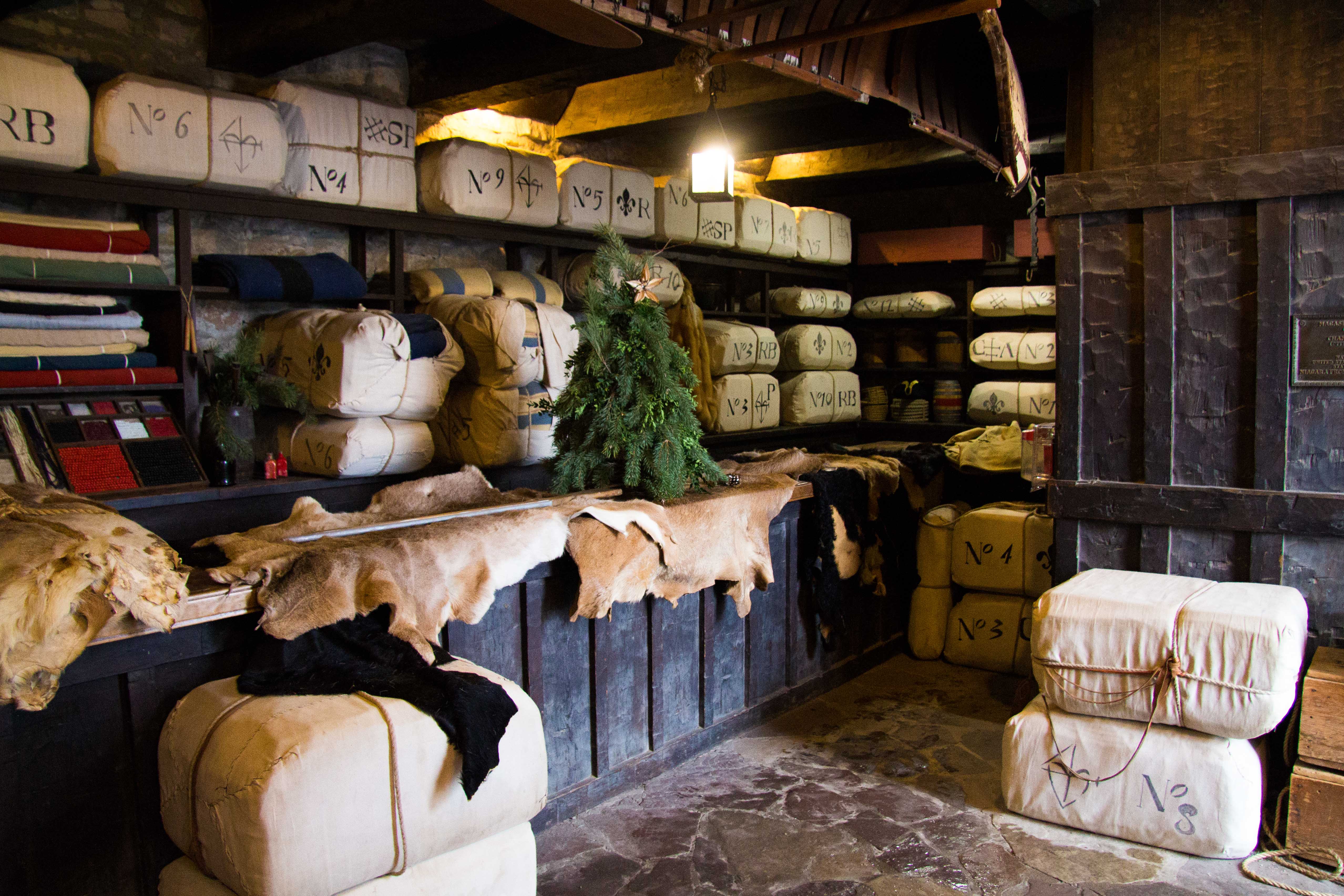 We were greeted by a man dressed up in costume toting a gun which, he warned, might not go off in the cold. It did, and while his head disappeared under a cloud of white smoke, Danielle and I hurried off to complete the Speedy Gonzales version of the outing. They just never give you enough time on these tours.

If you do have enough time, you can view introductory exhibits and watch an orientation film at the Fort’s Visitor Centre, and then take a guided tour of the fort itself. We did a quick run-around of the buildings and enjoyed the views of the Niagara River. The fort looked extra spectacular in the snow.

The bus took us to Whirlpool State Park next, where the gorge walls of the Niagara River force huge amounts of water through a small space, creating dangerous Class V white water and excellent conditions for water sports, and salmon and trout fishing.

Our final stop was back at Niagara Falls itself, where we had free time to enjoy the day view of the American Falls and meet up with Madelyn for lunch. Our reunion was short but especially sweet, much like the tour itself. 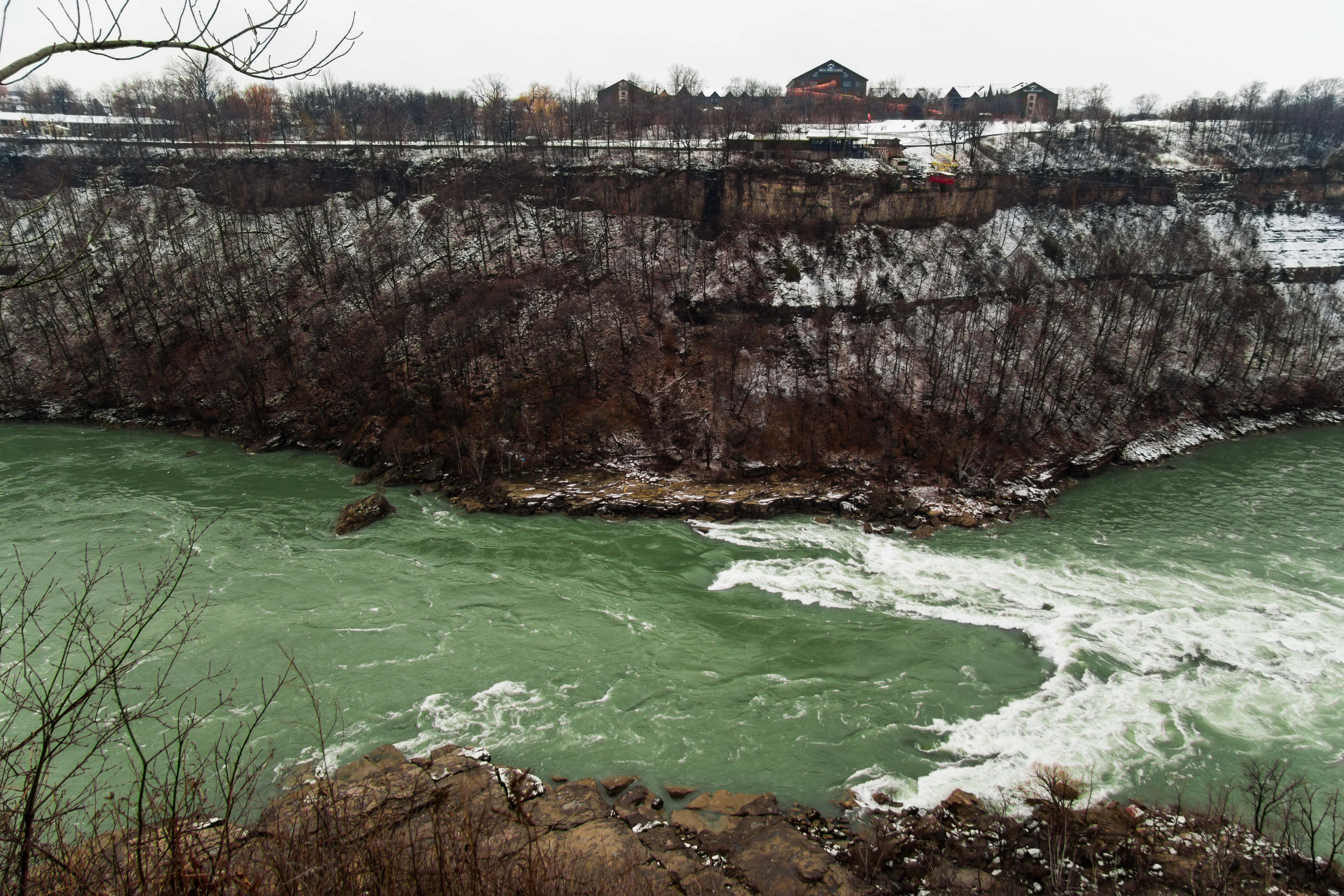 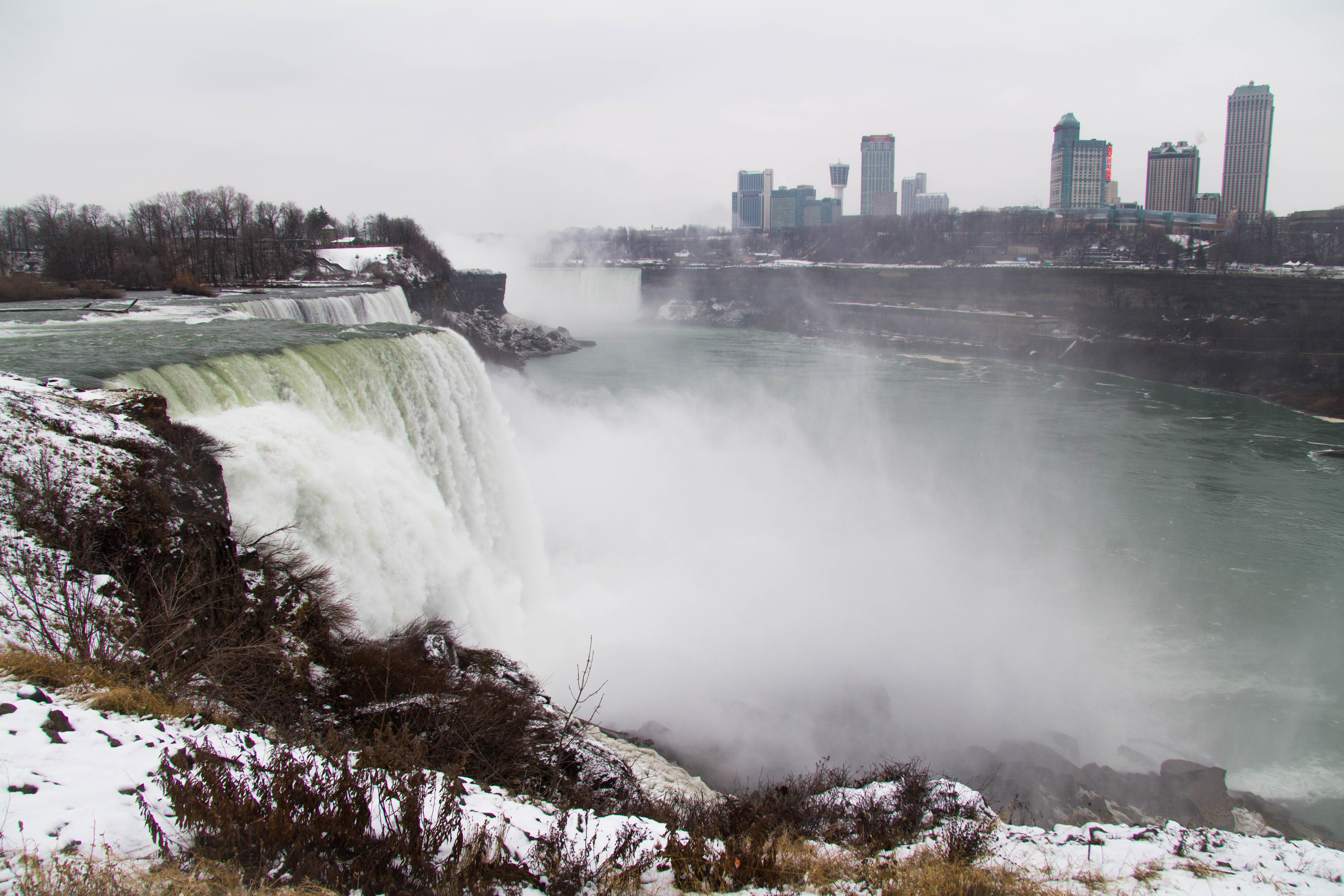 For information on the bus tour we did, click here.