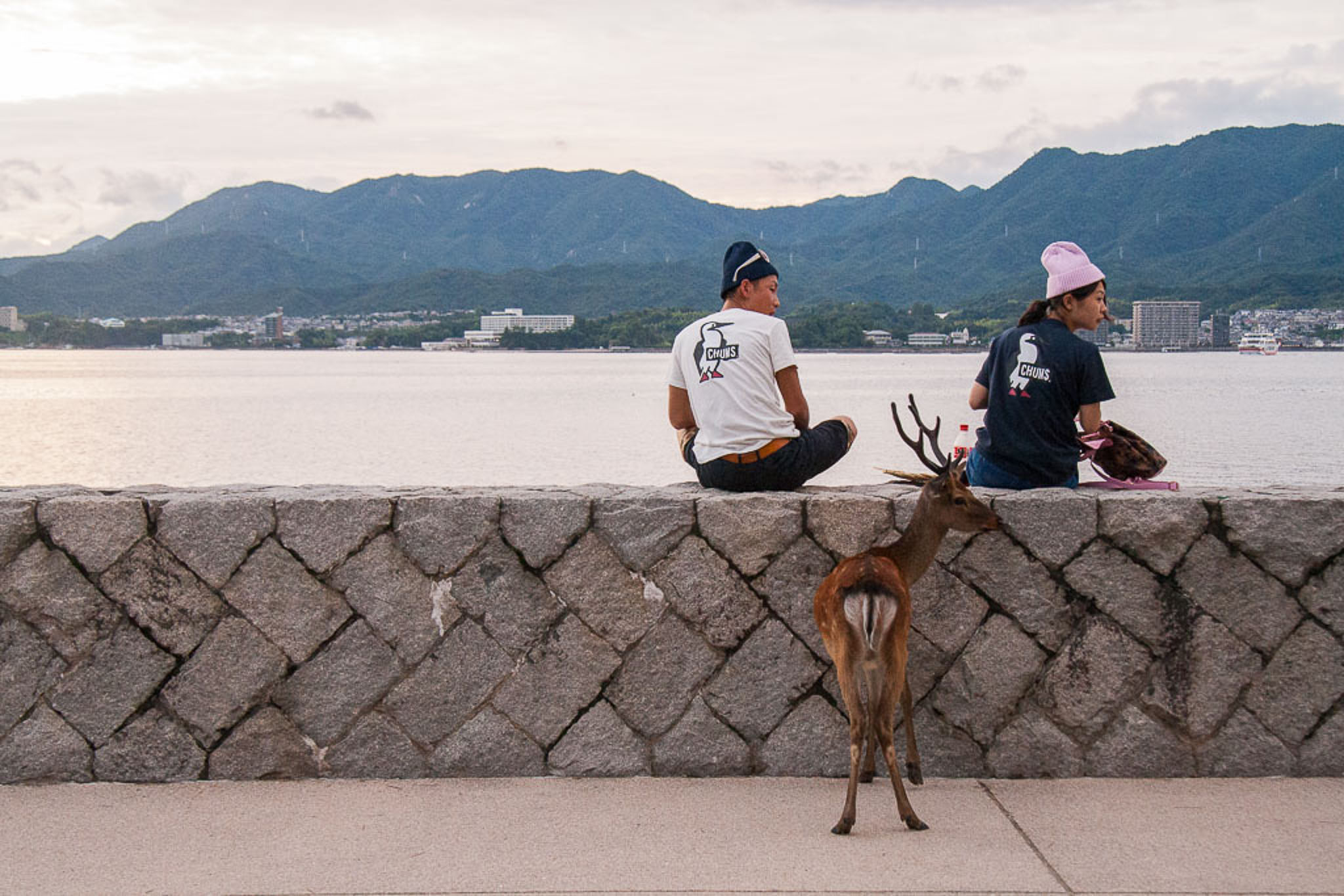 “…so please do not feed the deer,” the announcement played over a loudspeaker as soon as I walked out of the terminal. Wait – what!? There’s deer here? Thanks to the Interwebs, many of Japan’s “animal islands” have become pretty well known in recent years, but I’d never heard of Miyajima being described as one.

The small island (officially Itsukushima, but popularly known as Miyajima) in the Western part of the Seto Inland Sea is best known for the red, ‘floating’ torii gate that marks the entrance to Itsukushima Shrine. Revered for centuries as a holy place, the shrine is considered one of the most beautiful sights in all of Japan, and, just under an hour away from the city center, a must-see for any visit to Hiroshima.

What I didn’t know was that it is also home to a population of wild-but-tame Sika deer. And that they are slowly starving to death. 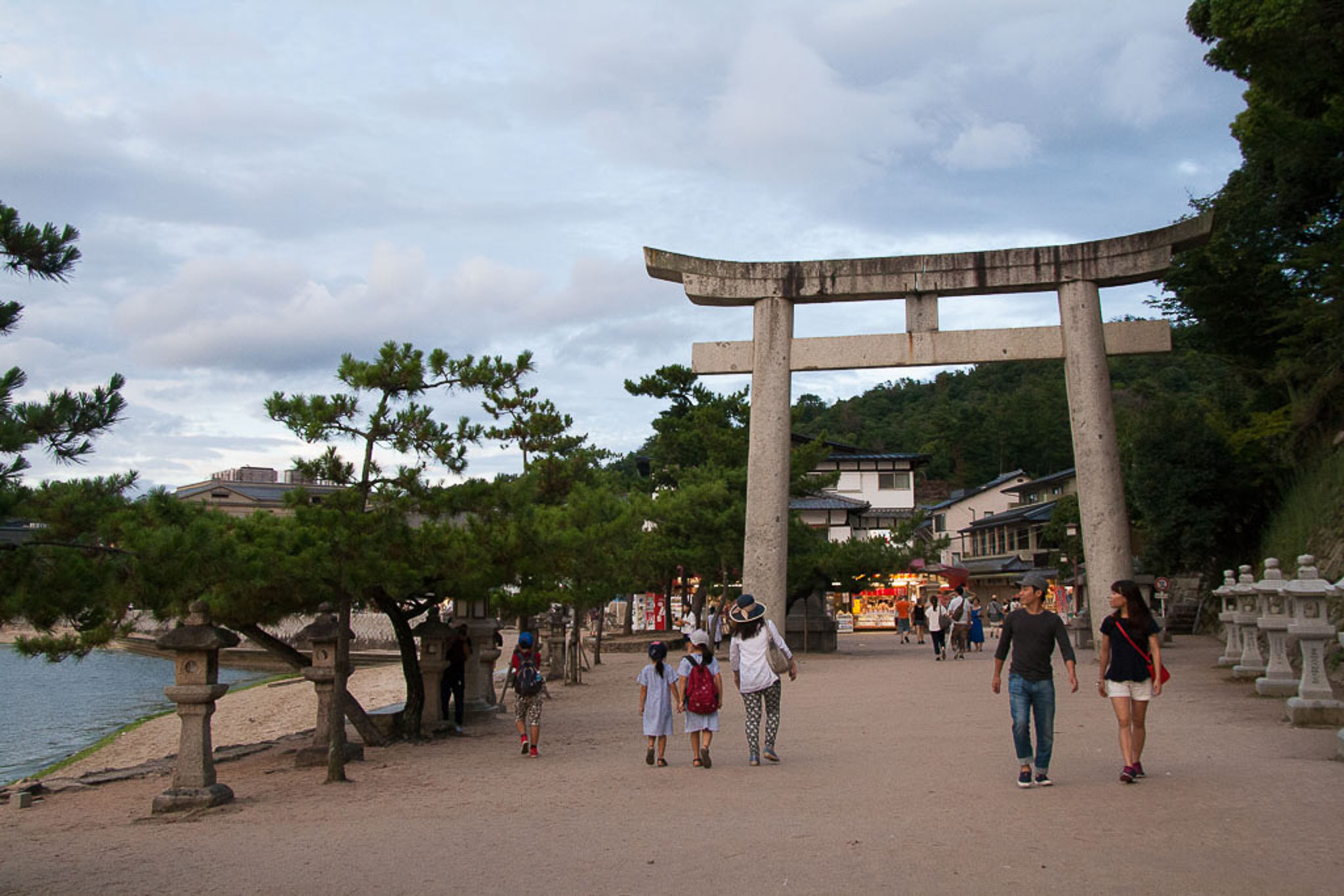 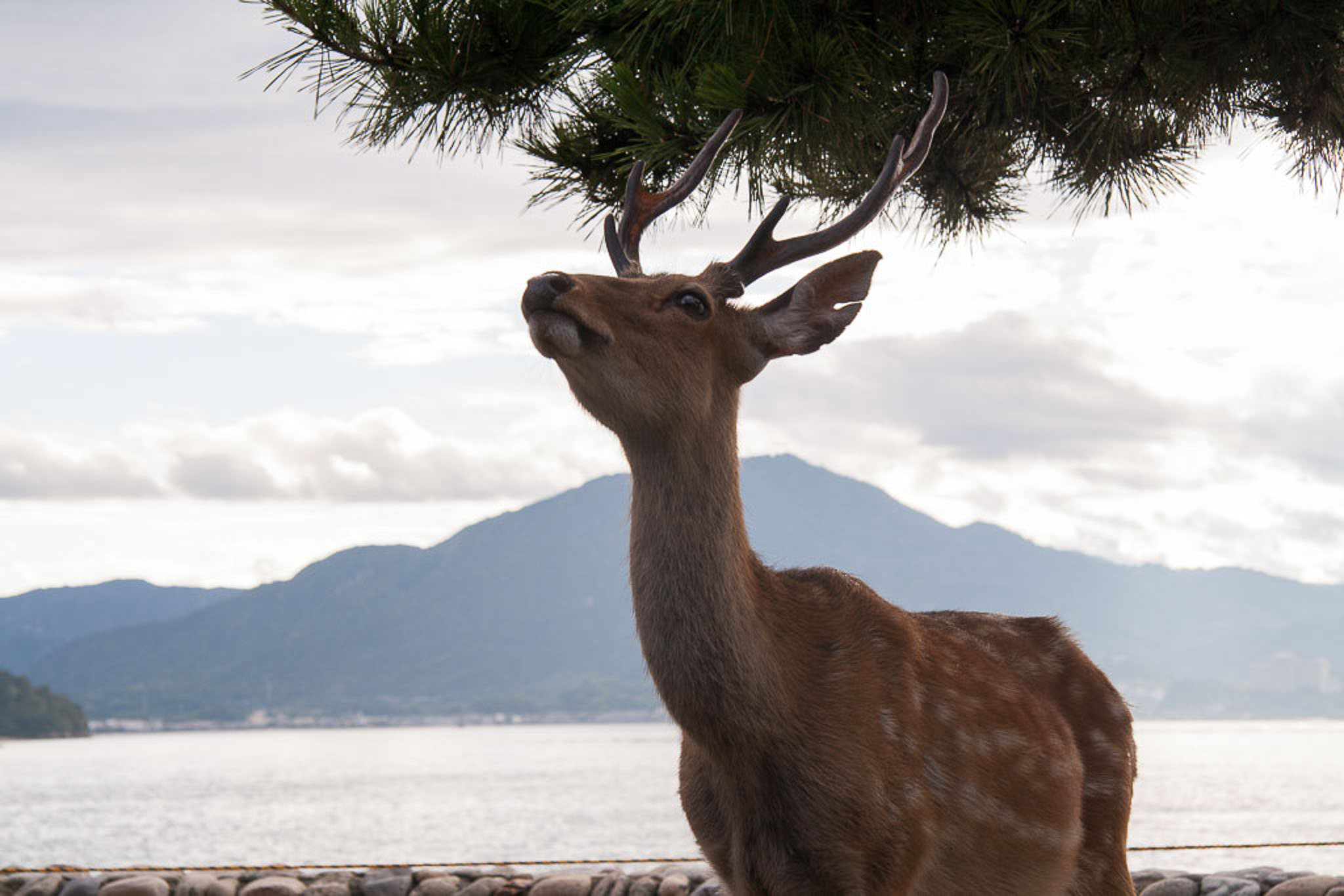 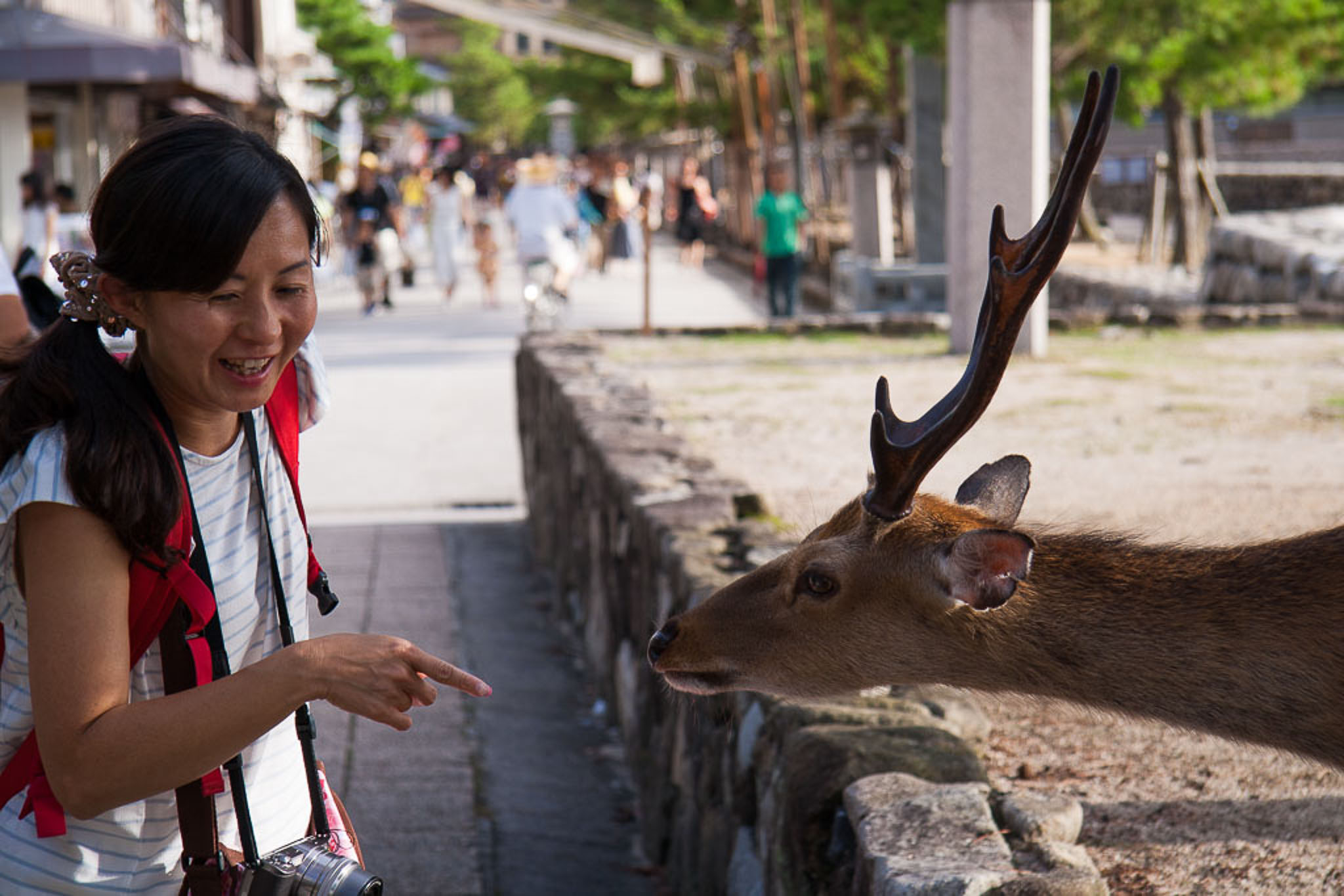 The only native deer of the archipelago, Sika (Cervus nippon) have long being considered sacred animals in Japan. Even today, certain populations, like the ones in the city of Nara and the Nara Deer Park, are protected by law. One would think, then, that the deer which roam a place as venerated as Miyajima would be well looked after. In fact, the opposite is true.

In ancient times, the deer on Miyajima were worshipped as messengers of the Gods and locals offered food to them in small temples. By the end of WWII, however, the population had declined drastically and in an effort to curtail extinction, people began to feed the deer directly. 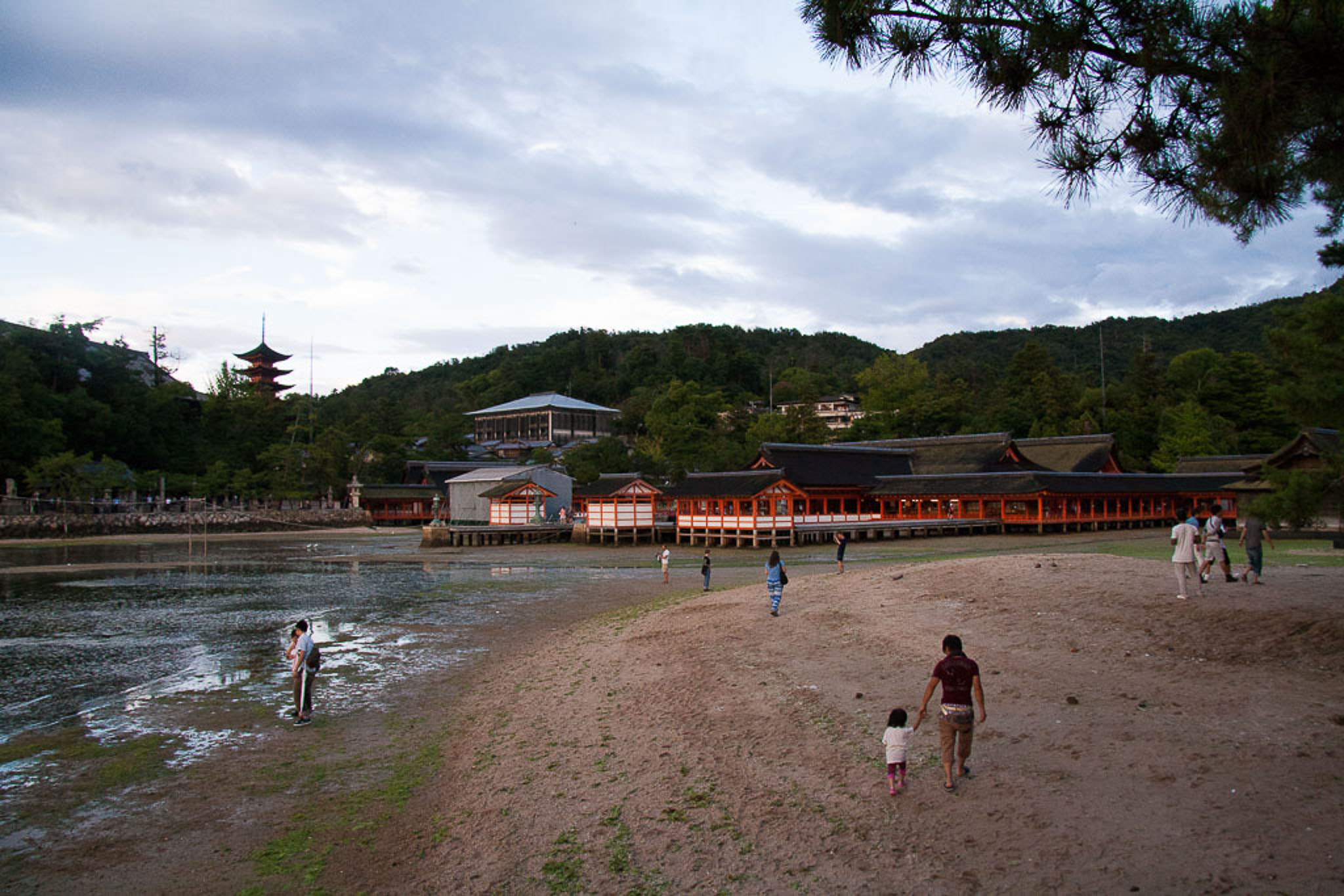 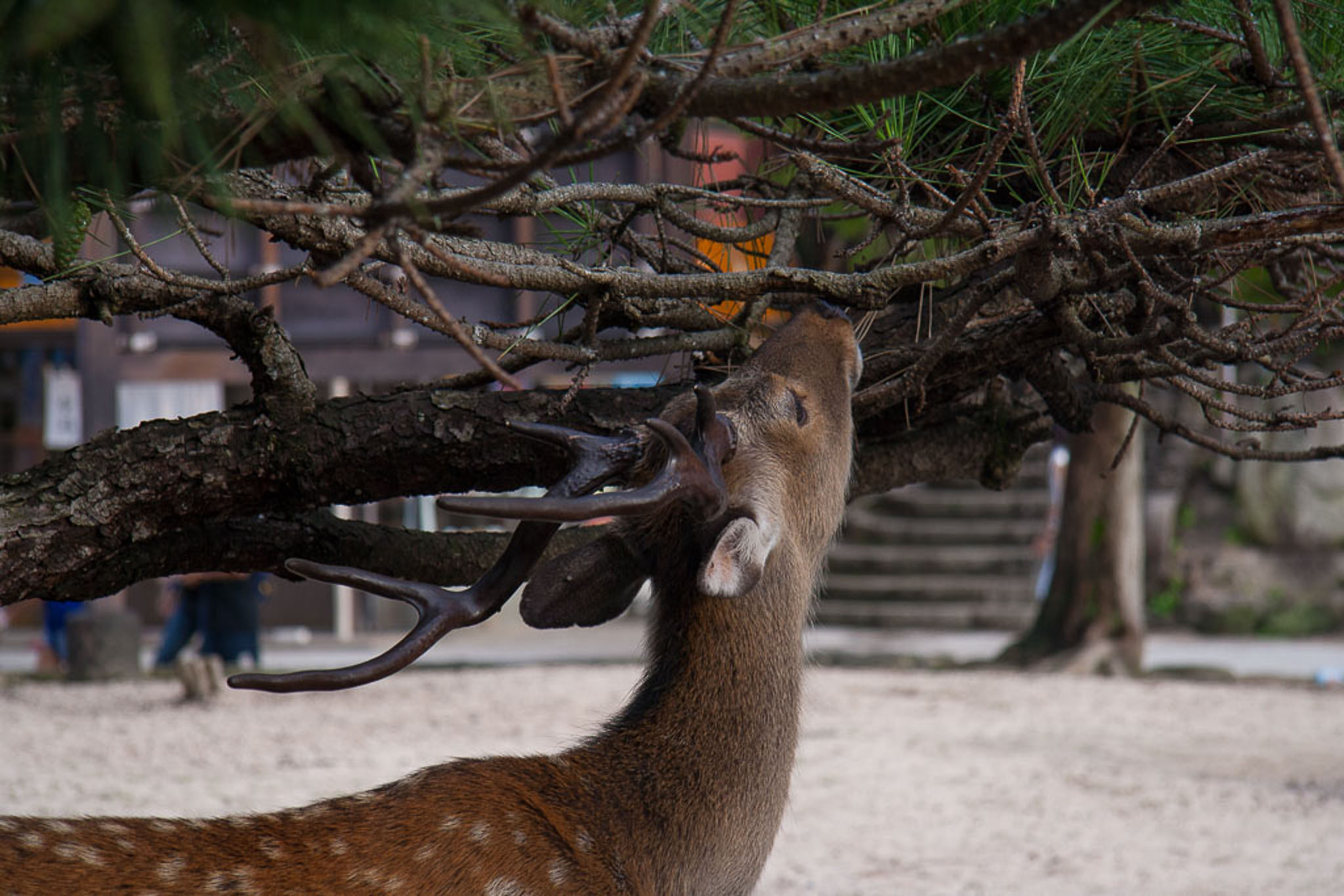 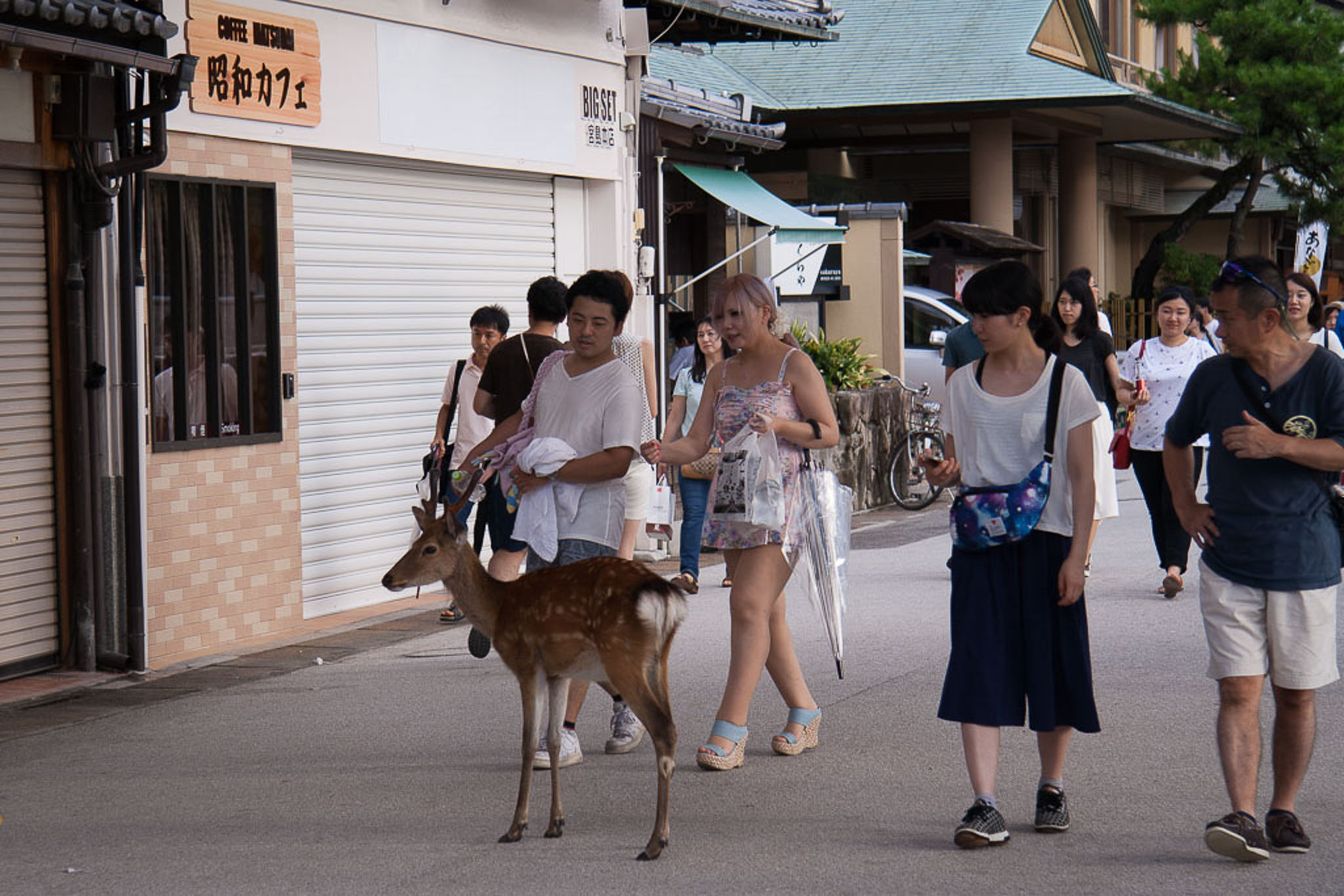 The area enjoyed a boom in tourism once word travelled about the tame deer – and in turn, the population began to recover, wreaking havoc on the island’s vegetation and causing the deer to become dependent on visitors for food.

When residents began to express concerns about the increasing number of deer coming into town looking for food, leaving their droppings and obstructing traffic, Haitsukaishi – the city that has jurisdiction over the deer – decided to implement a management plan to “achieve an appropriate relationship between human and wild deer so that the deer on Miyajima Island can live wild.” Since 2008, feeding the 500+ deer on Miyajima has been prohibited. 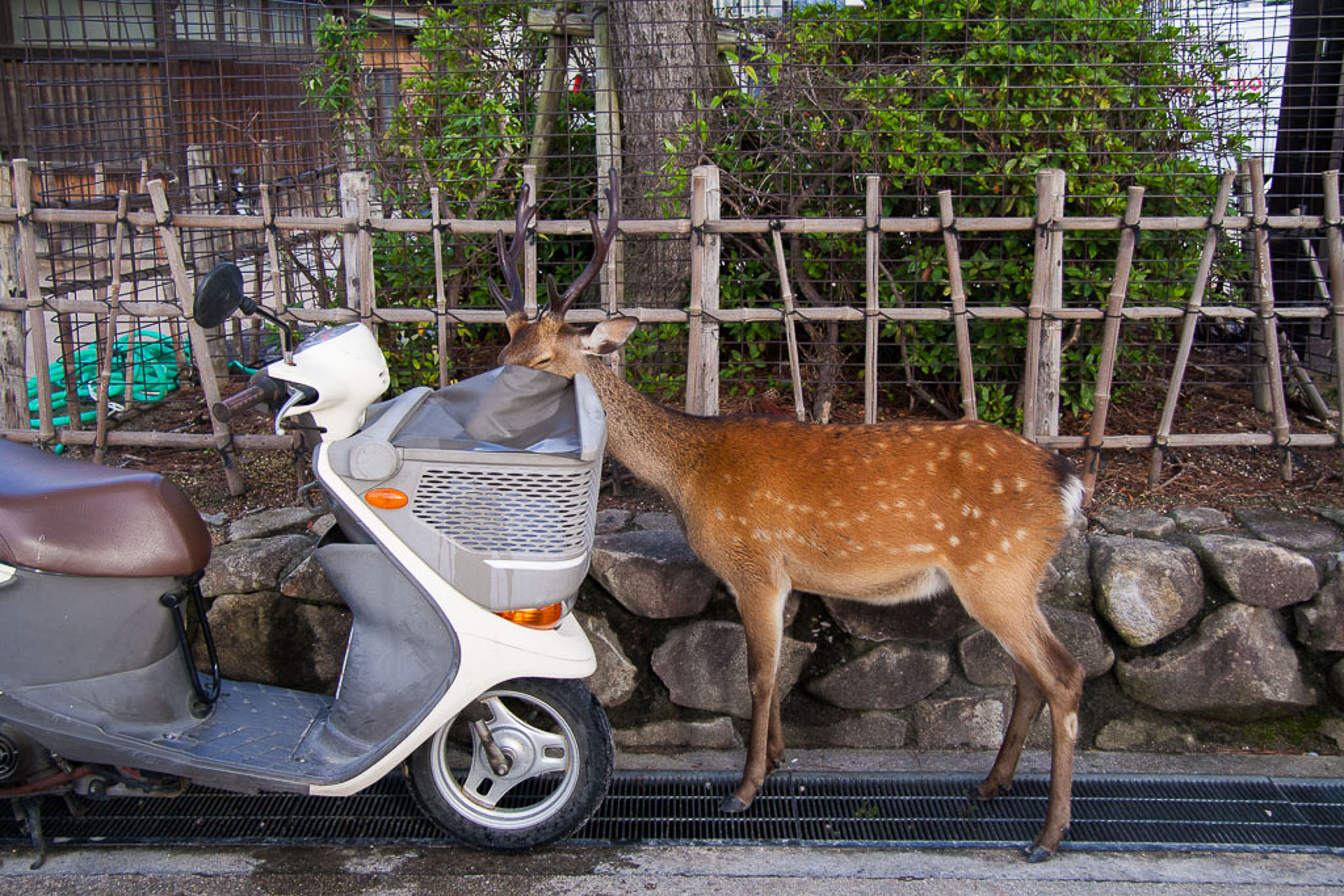 Instead of exploring other options like planned feeding, birth control, restoring vegetation or relocating the animals, the ban has essentially cut the deer off from the only food source they’ve known for generations, and the results are, as many animal rights activists have argued, unnecessarily cruel.

So what appears to be curious, friendly deer approaching visitors to say hello on Miyajima is actually the poor, ravenous creatures looking for anything they can get their hooves on to eat – maps, ferry tickets, leftover snacks. Anything. 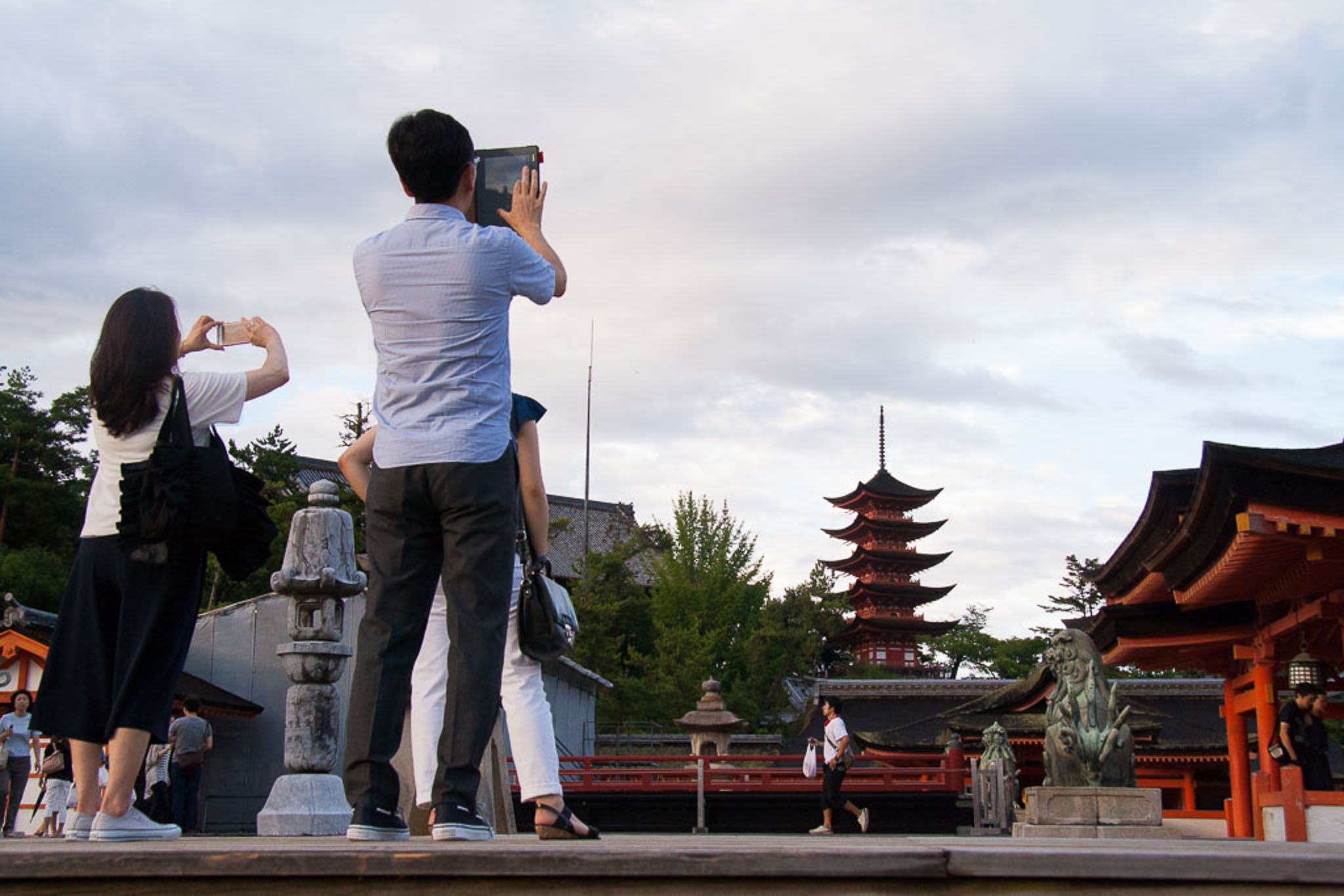 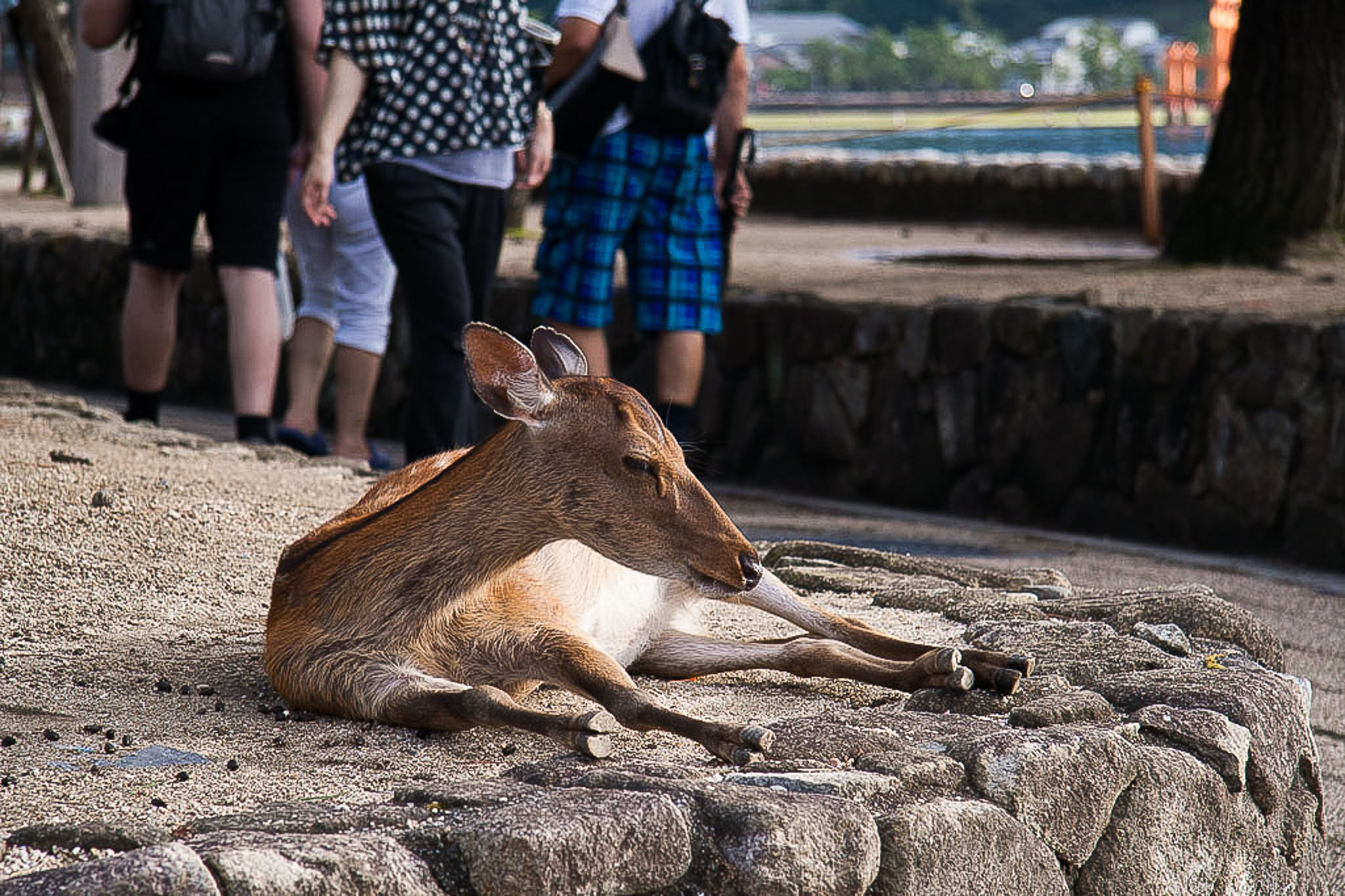 The government claims that “excessive human interaction should be avoided” and that the problem will eventually sort itself out – on an island with at least 2,000 residents and about 5 million visitors a year.

And while many visitors, like me, are ignorant of the problem before visiting – the announcement on the loudspeaker barely touches on the plan and is delivered in a tone that would have you believe you are doing the deer a favour and not actually contributing to their slow, painful demise – it doesn’t take long to realise something is seriously wrong with the animals.

I saw many lying around, looking very ill from whatever human food they’d consumed, or so I thought at the time. Others were more active, determined to sniff out food from visitors’ bags, which explains the random “beware of the deer” posts I’ve since discovered on TripAdvisor. 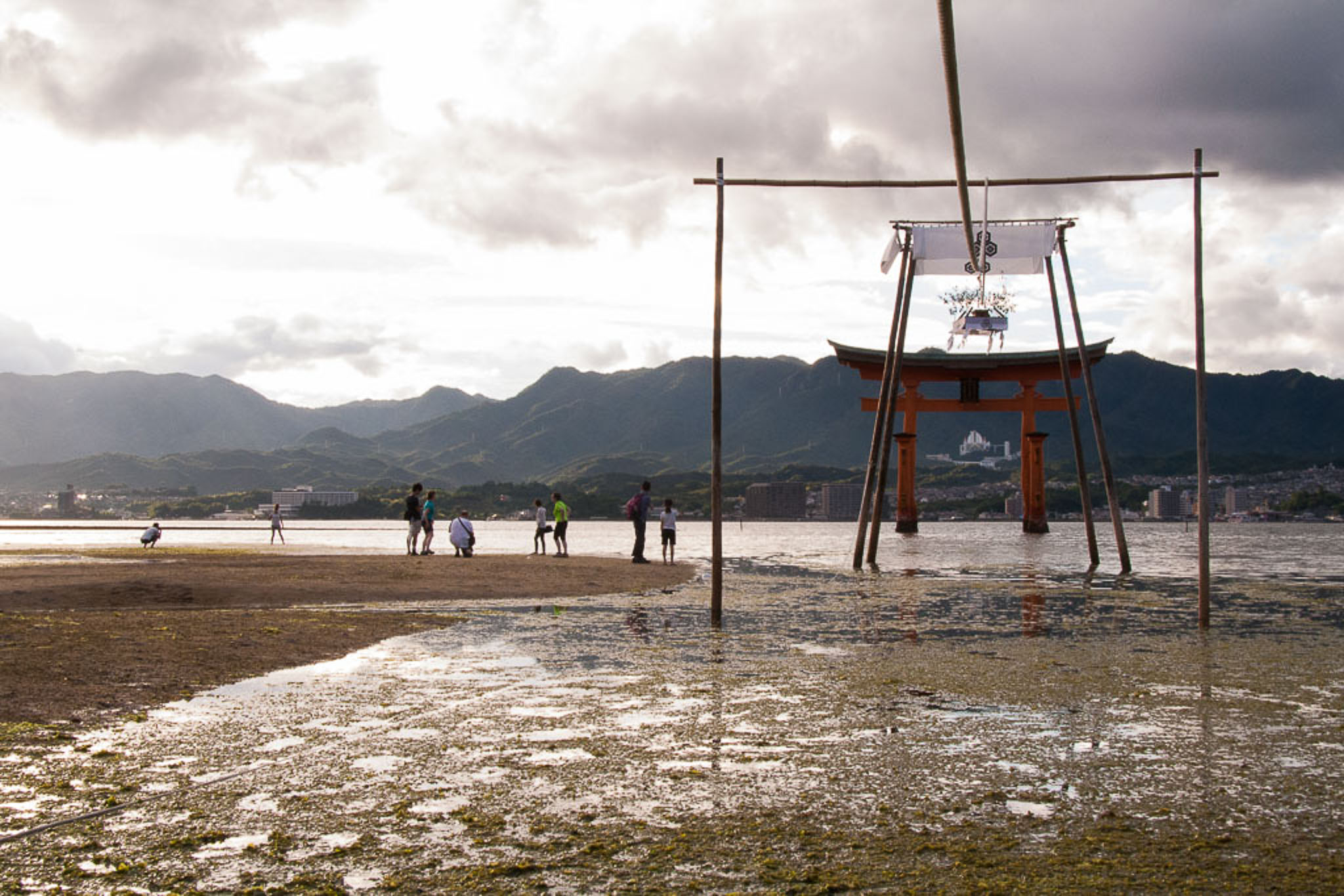 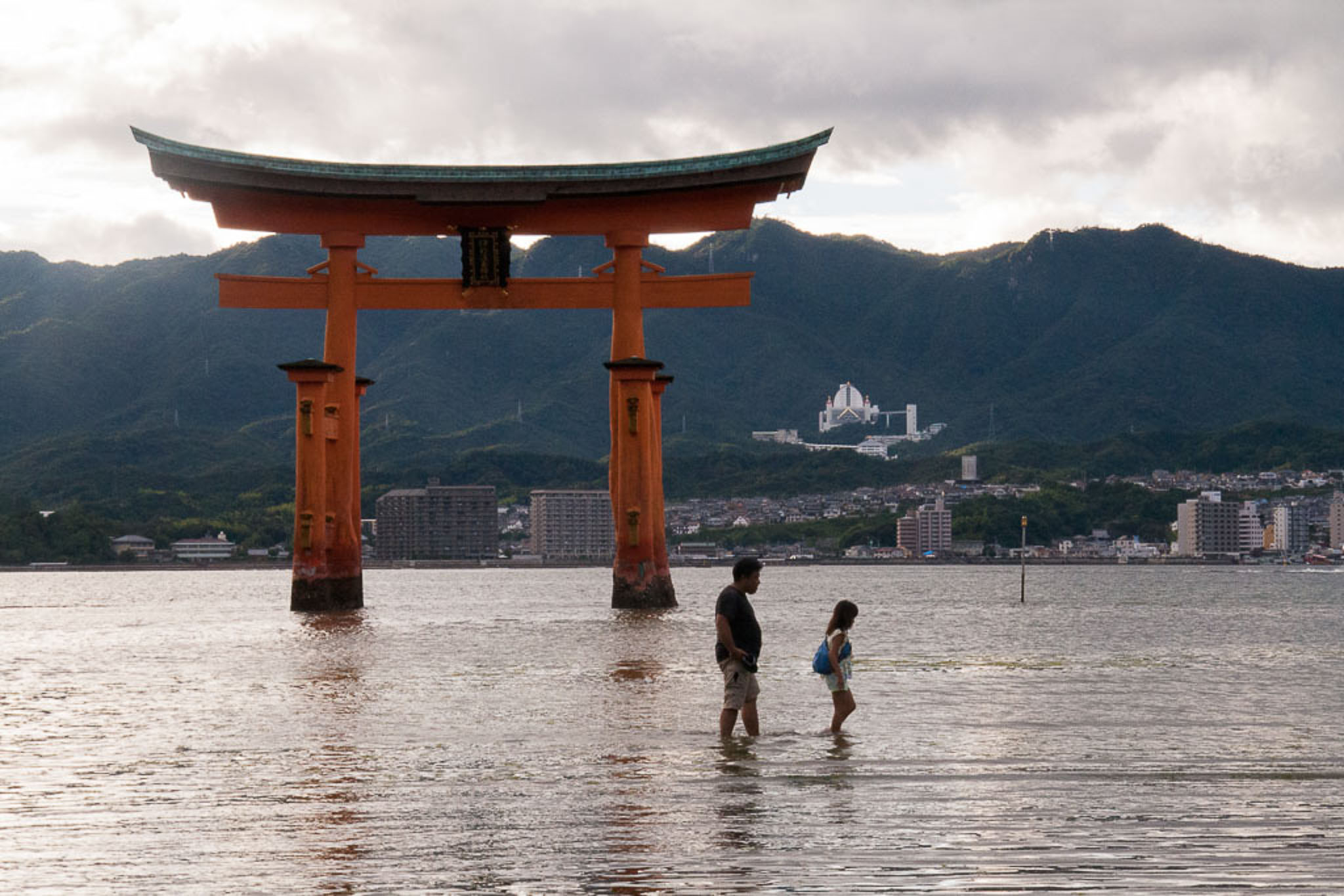 I also saw a deer breaking into the top box of a scooter and two European tourists trying to wrestle the papers the deer nabbed out of her mouth. The Europeans thought they won the fight but when I walked past the same scooter a couple of hours later, the top box was open and the paper was gone.

I wish I’d known how dire the situation was at the time. But looking back, I’m not sure what I could have done either.

The deer on Miyajima are so gentle, and as beautiful to watch as the setting sun behind Itsukushima Shrine. I really wish they didn’t have to suffer. 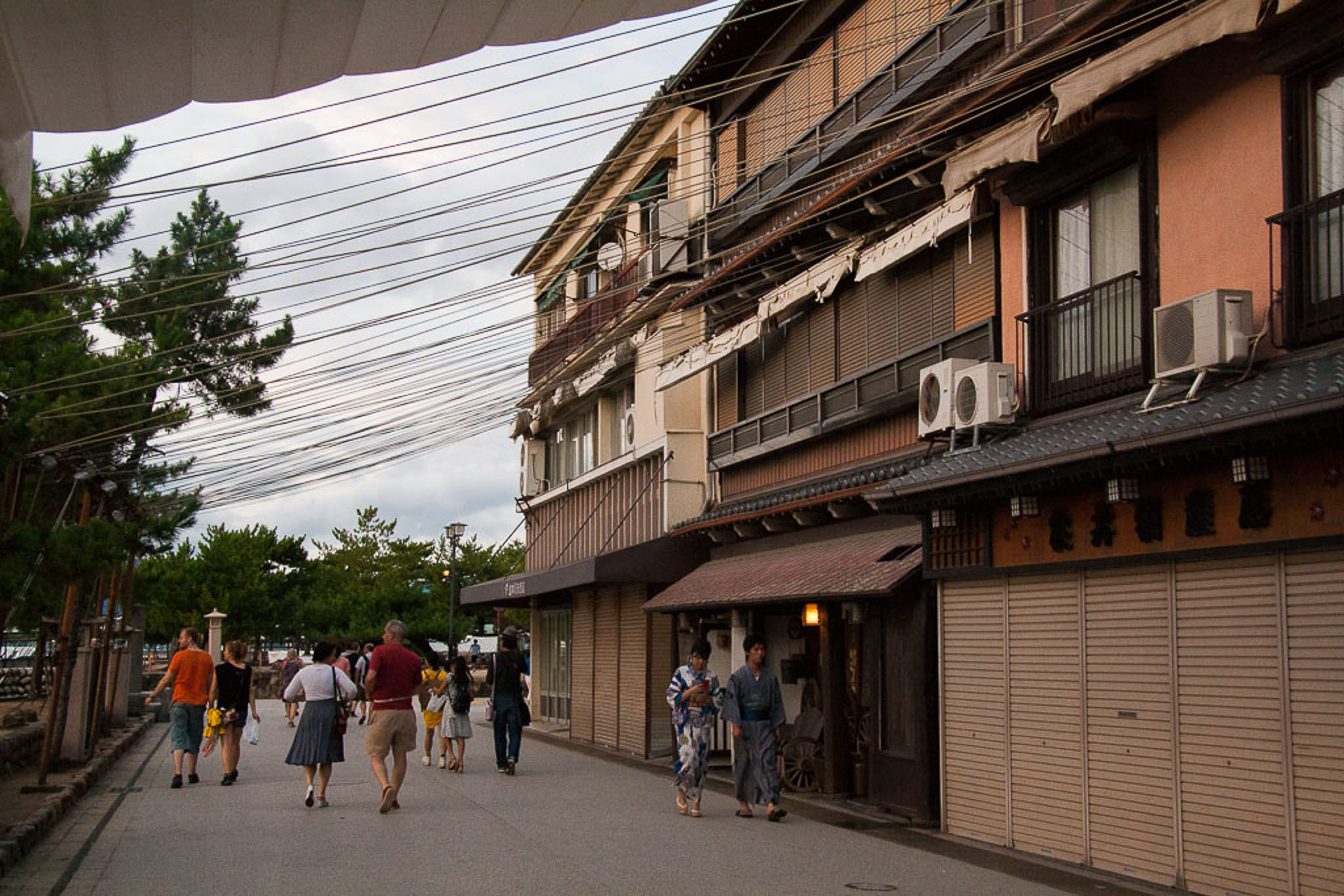 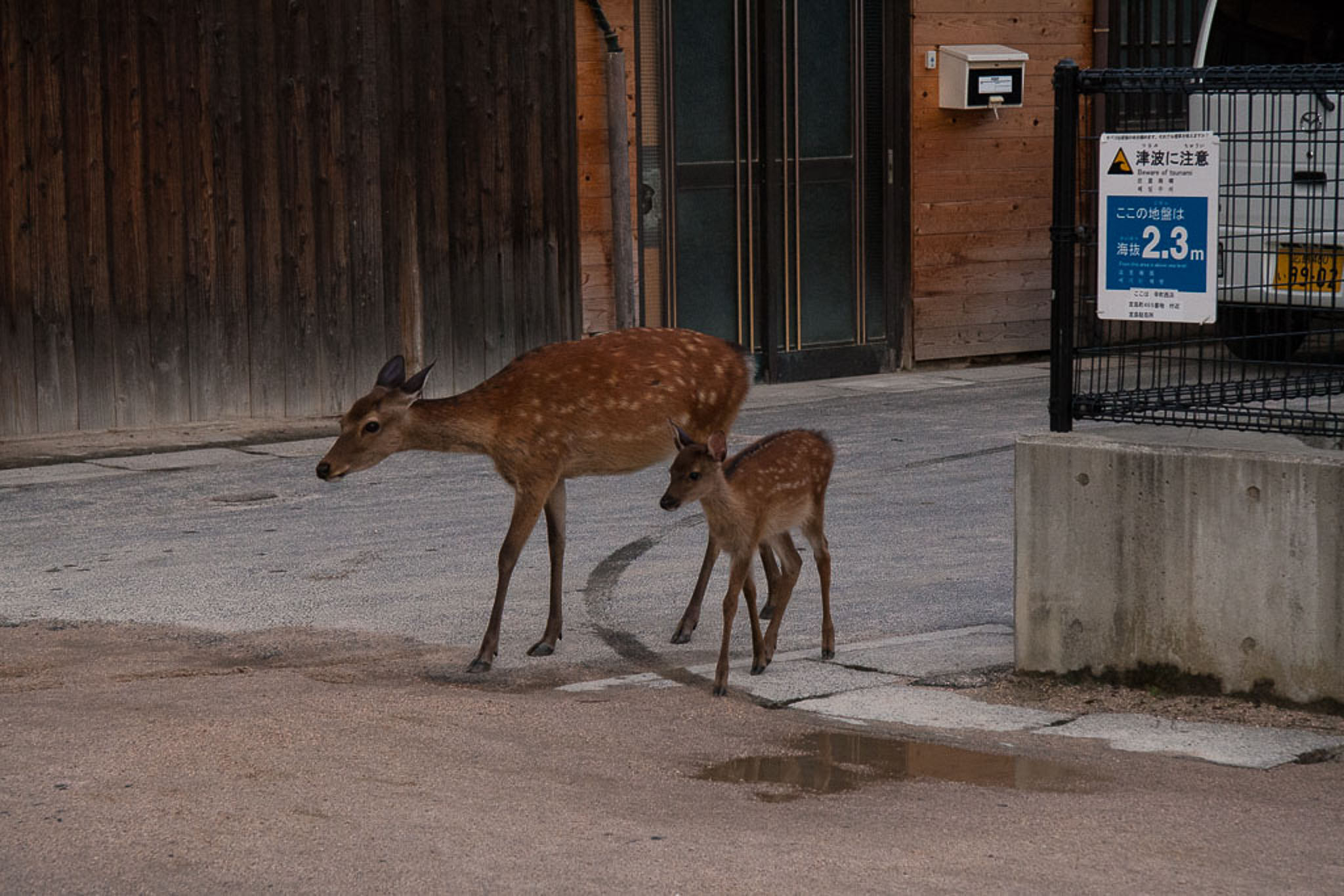 I realise that as a meat-eater, I’m not really in the best position to comment on animal cruelty, but before all you vegans/vegetarians/veg-curious nod smugly at me for admitting that, let me just say I have seen plenty of you engaging in questionable behaviour.

We’re all hypocrites when it comes to animals, I think, and I don’t really know what should be said about that. But I spent the whole way back to Hiroshima thinking about the question.

And now I pose it to you. 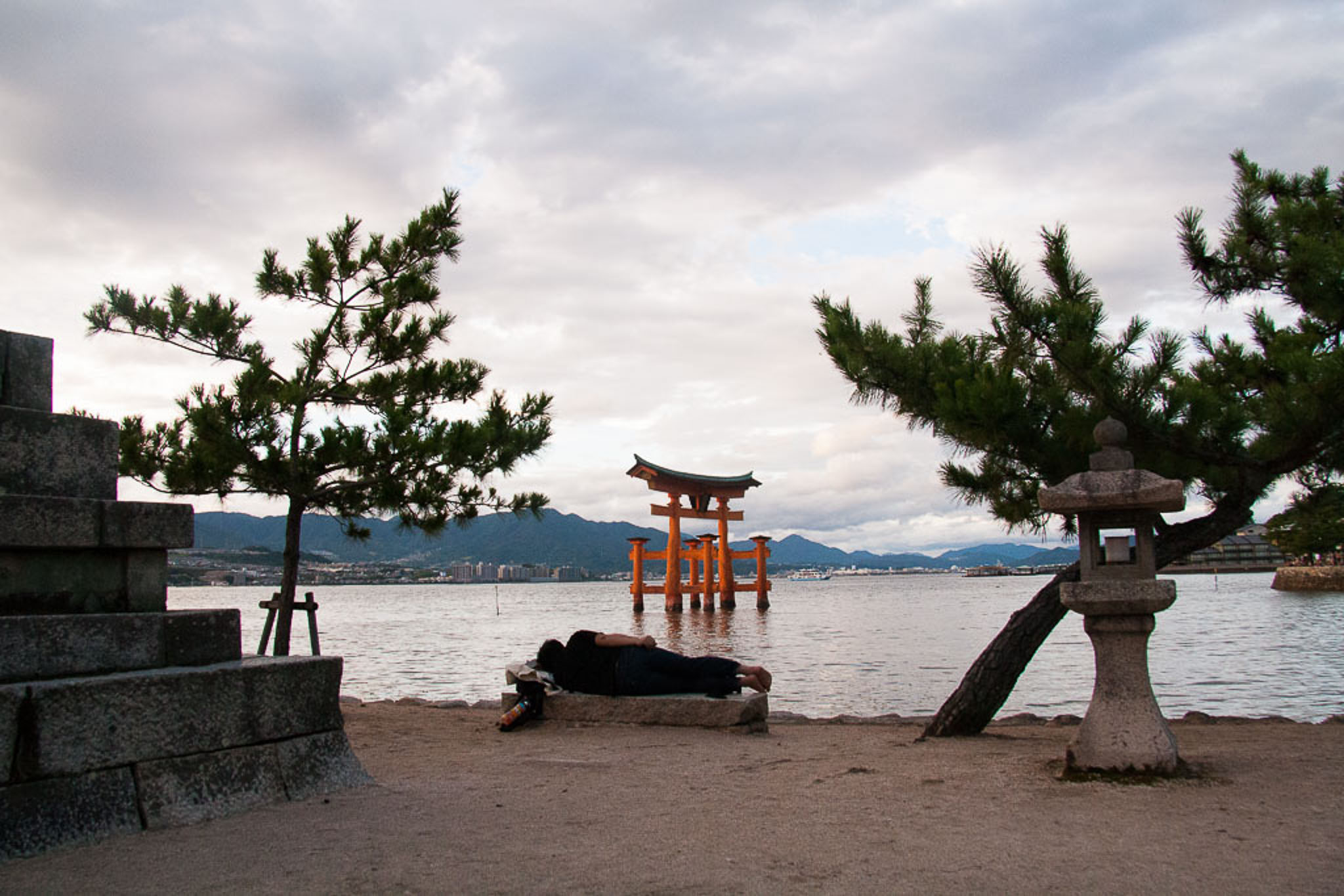 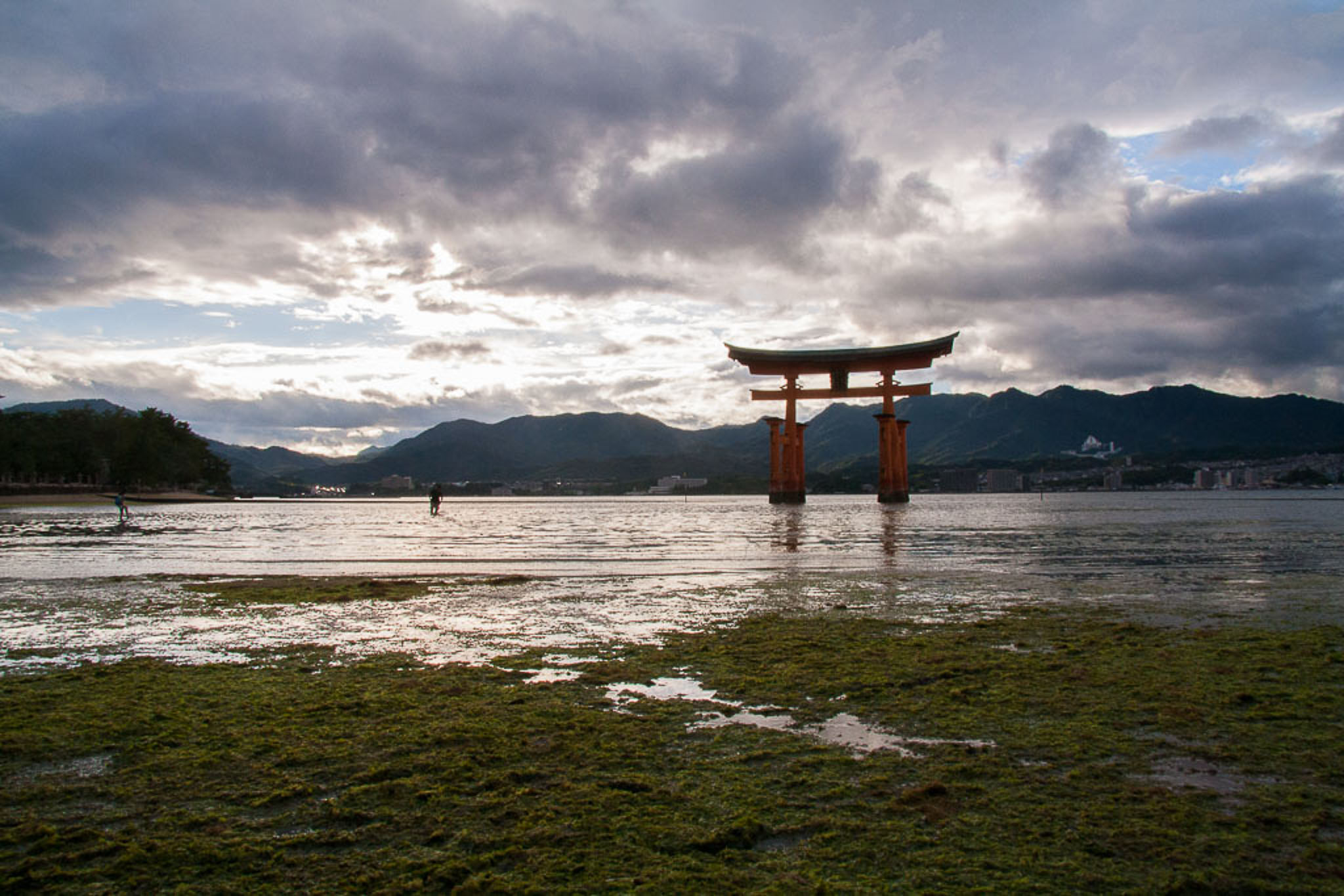 Such a thoughtful post, Simone, and bringing to light something that I think is kept very much under the radar! Thank you for bringing it to my (and everyone reading’s) attention. I actually found myself uncomfortable by the deer in Nara when I visited, rather than elated or humbled by their presence. I fear that it might be the same again when I visit Itsukushima… 🙁

Thanks for your comment, Jacinta. It’s definitely not something that’s talked about openly, and in these interactions its rarely the animals that benefit. It will be a cloud hanging over your trip, for sure, but I think it’s important for us to experience both the good and bad side of things, you know?

Staying overnight here on Miyajima. What I have seen is not good. People willingly feeding deer paper to get a selfie. I dont see any good interactions here. Its not fun to see how the deers live here. Thanks for your post I will write one up myself soon.

Simonereply
– In reply to: Colin

That sounds awful :/ Please link us to your post when you do!

I’m a life long vegetarian and I promise I’m not smugly nodding at you! But seriously, this makes me really sad! I visited Miyajima in 2012 with my high school on a study tour and I loved the deer, especially because I had never seen them in person before. Of course they were gentle but did almost violently rip papers and even plastic bags out of mine and my friends hands (and I have some photographic proof). I do remember thinking about how hungry they must be but I didn’t realise about how much they’d been cut off. It makes me so sad T_T Hopefully animal rights activists in Japan can continue to fight for the cause? 🙁 Thank you for your post!

You are right that it’s a huge problem.
Because by law the deer are protected, they deer have reached peak carrying capacity of the island. Anywhere else this would mean culling the population down. This is common practice but maybe mass killing the deer won’t go over well in Japan. But keeping the numbers in check means more resources for the remaining deer and less incentive to move into urban environments.
The next alternative is injecting immunocontraceptives into the females to prevent them from breeding for 5-6 years. A pilot project is launching in Victoria, BC Canada this year to deal with their own urbanized deer problem. check it out at uwss.ca.
I lived in Hatsukaichi and this problem upset me. Because the deer are sacred and protected by law, I don’t know if they should just feed the deer (something natural for them) or manage the population. But the current system isn’t working.

Hello,
I recently visited Miyajima and was doing some research for my travel blog and came across your article. Thank you for bringing this issue to light, I never would have realized this until I read your article. I was wondering if it would be okay if I added a link to your article on my blog?

Simonereply
– In reply to: Mya

Hi Mya, you’re welcome and yes of course you can link to it!

I’m a little confused by your article and my experience in Miyajima today. I saw curious animals used to being approached by humans, seeing us as a source of easy food and not a threat. The animals I saw were looking for food, but not because they were starving. They had muscle and meat covering their bones and a good indication of health is babies, I saw some today and I see a photo of them on your blog. A sick or starving deer doesn’t reproduce.