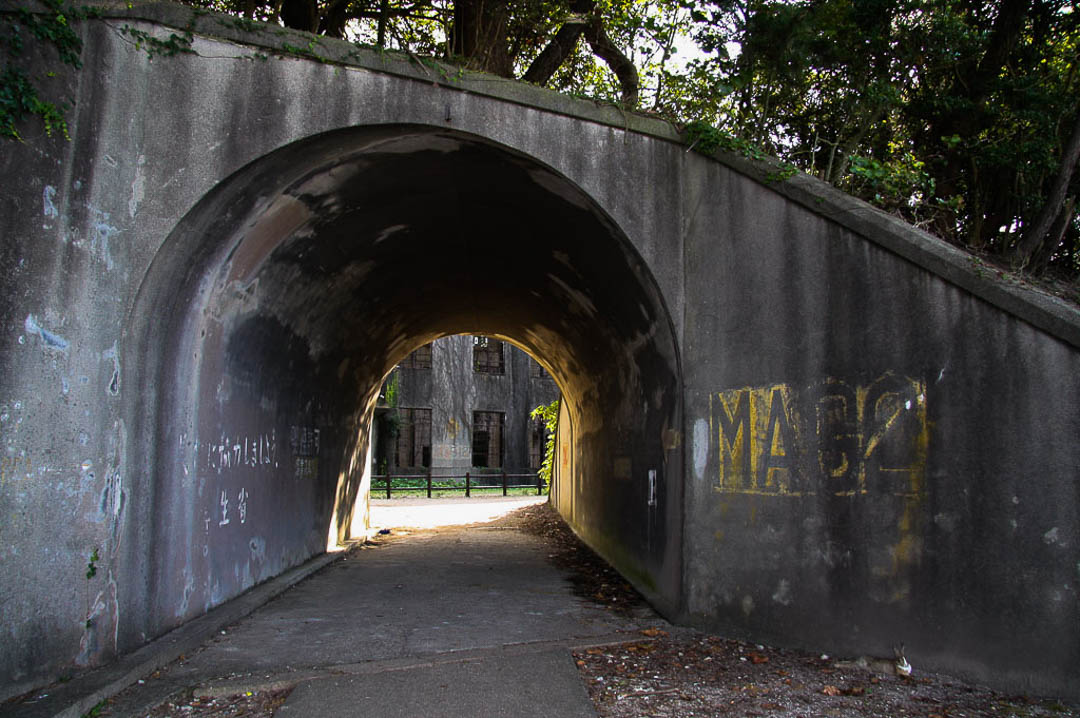 If any island served as inspiration for ABC’s LOST (a.k.a the best television series of all time) it was surely Ōkunoshima. Featuring a golf course, pylons, old test laboratories and its very own hatch, it is exactly where every fan wants their plane to crash. You can even enjoy polar bears in miniature – the island is overrun with an abundant population of bunnies.

The latter has earned Ōkunoshima the nickname Usagi Jima (Rabbit Island), with tens of thousands of visitors flocking there each summer to enjoy its beaches, soak in its onsen and feed and pet the adorable, fluffy animals.  But the island has a much darker past, and the smoke monster becomes more and move evident as you begin to explore.

On the third day of my trip to Hiroshima, I joined up with Mark, his brother, his brother’s partner, and her daughter to do just that. As it turns out, the bunnies are the least interesting thing about the place… 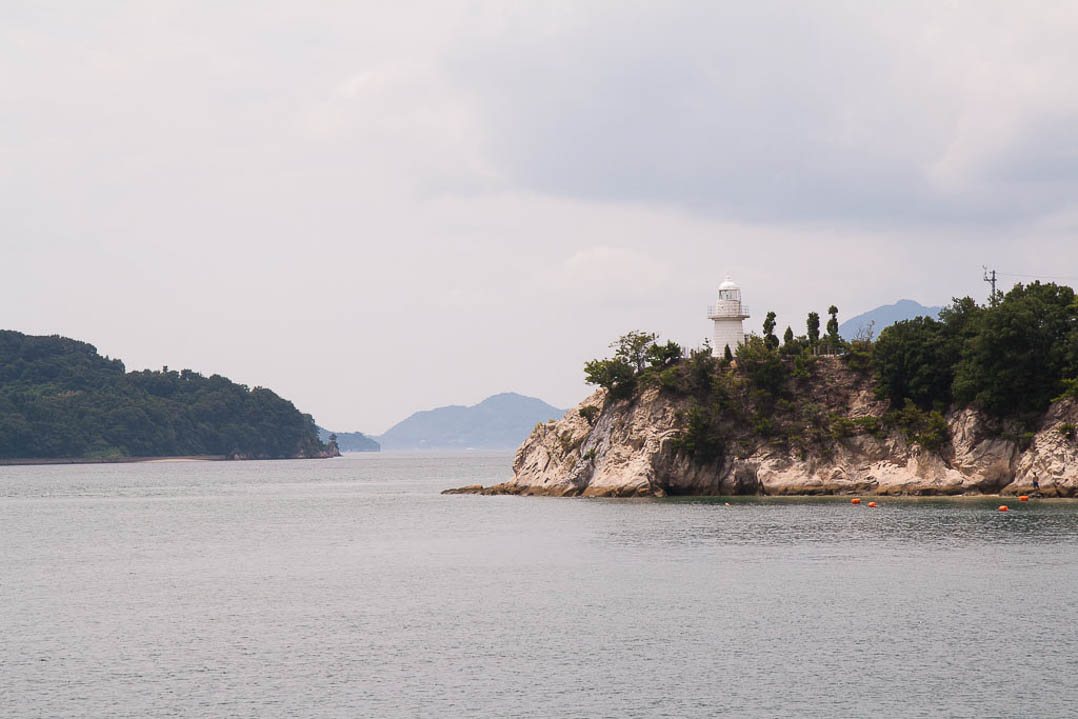 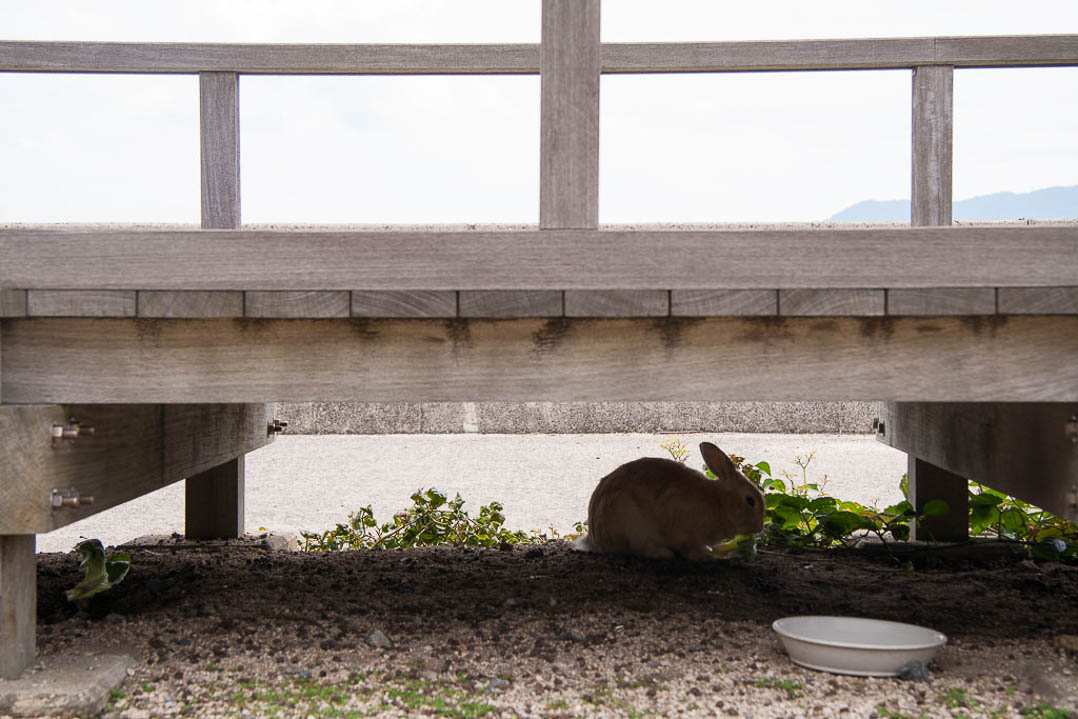 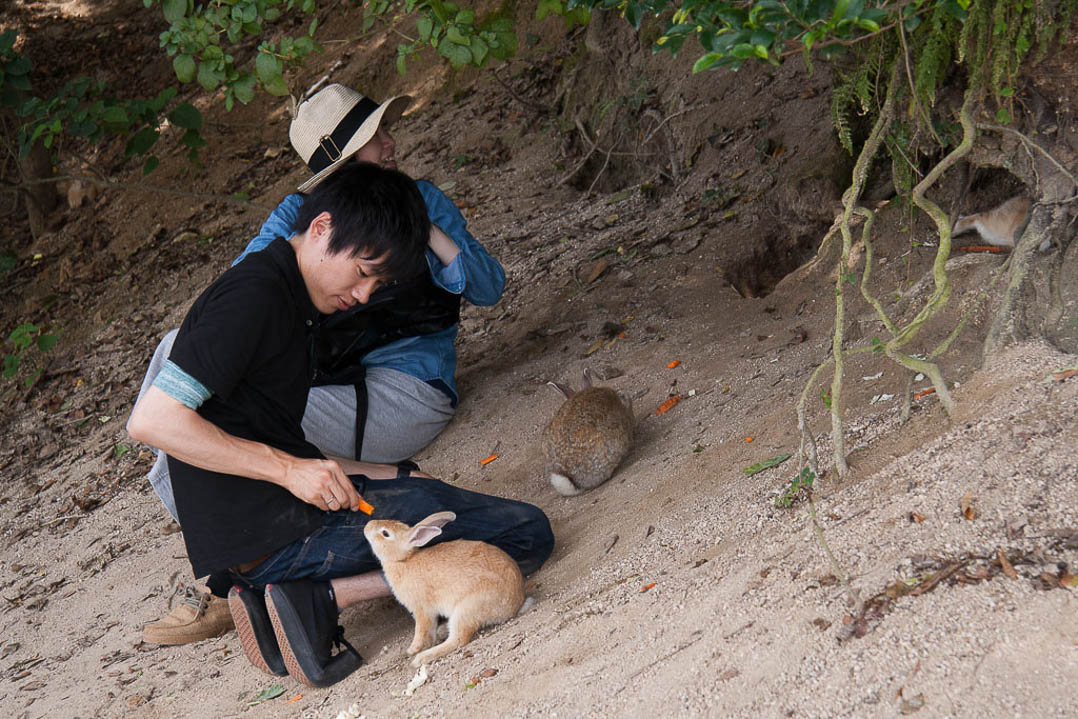 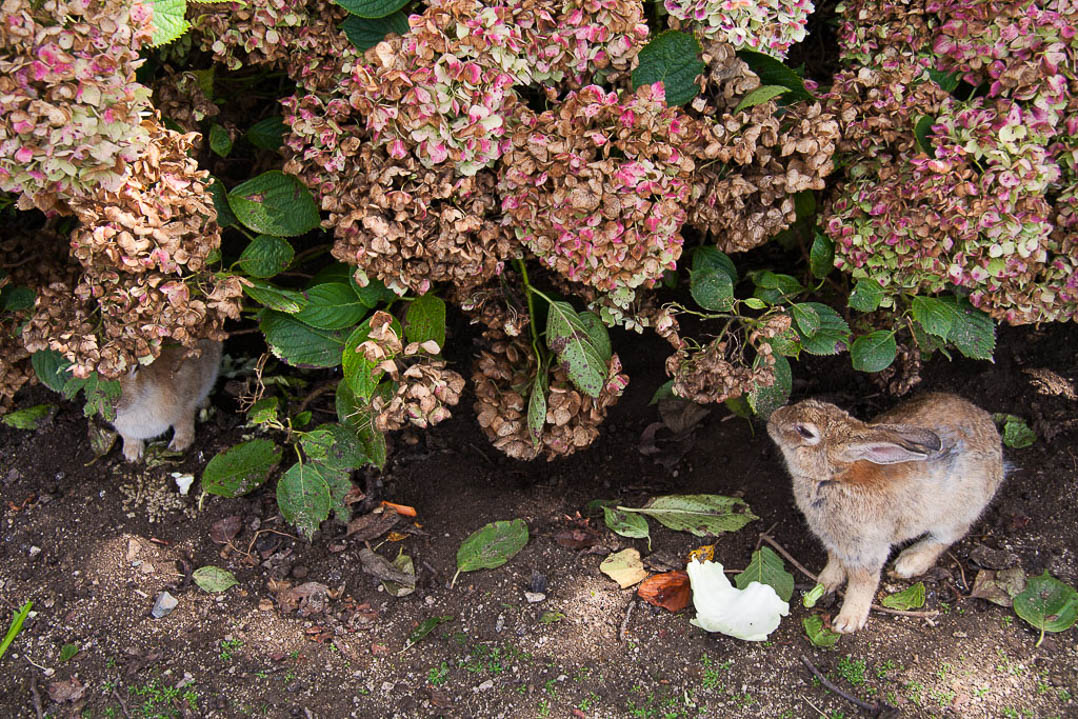 “I cannot believe they haven’t used this as a filming location,” I repeated over and over to Mark.

It was one of summer’s hotter days and we had tired of trying to coax the rabbits out from their refuge in the shade. After a long wait for a table at one of the few restaurants on offer, we parted ways with the others (the temptation to capitalize that was real) and set out to conquer the walking trails. At only 0.7 km2 (o.2 mi2), you can easily see the whole of Ōkunoshima in a day. 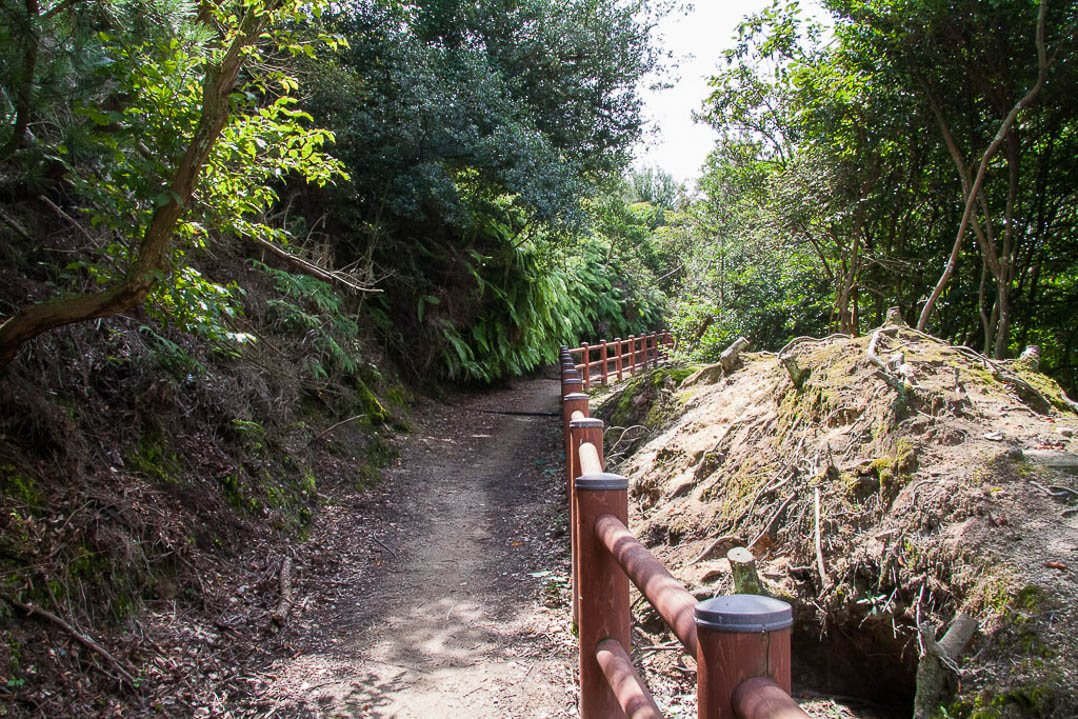 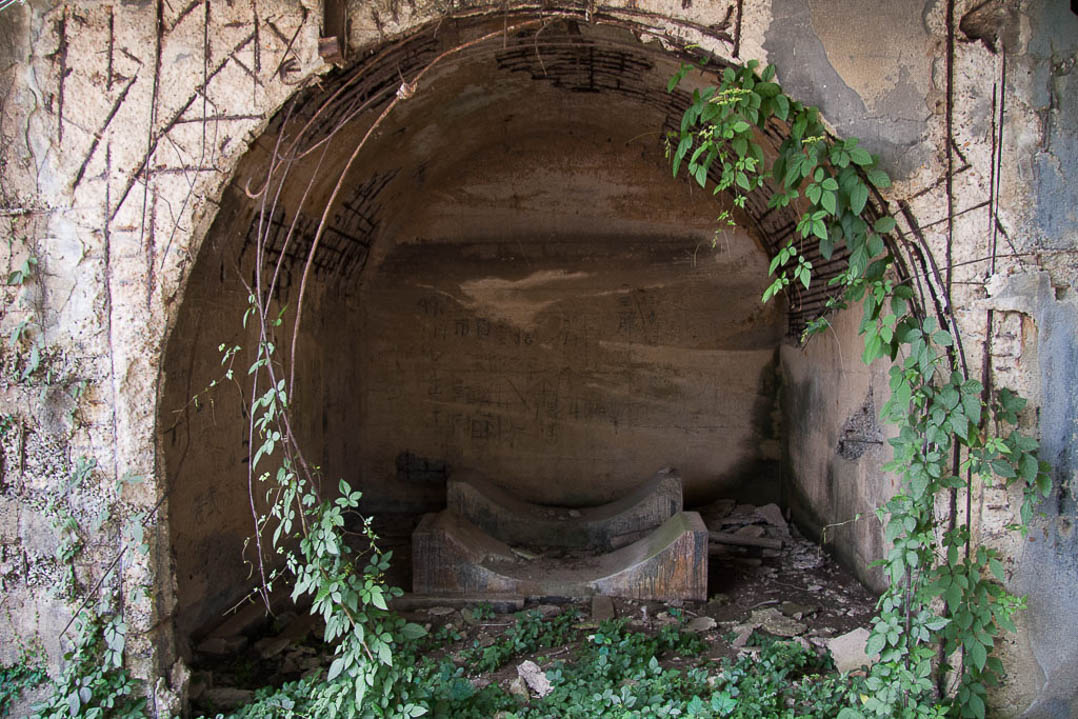 During WWII, the island was the site of a secret poison gas factory. Japan was a signatory of the Geneva Protocol but exploited its one major loophole: the development, production, storage and transfer of chemical weapons. According to some, rabbits were brought to Ōkunoshima to test the effects of the gases produced there and later released by the factory workers when the war ended. But others claim that a group of kids released eight rabbits on a school trip to the island in 1971. Either way, the predator-free environment allowed the original bunnies to flourish and their generations of offspring remain today.

Chosen for its secluded location, Ōkunoshima was far away enough from major cities like Tokyo yet close enough to the military installations in Hiroshima. The Great Kanto Earthquake in 1923 had also destroyed many of the chemical plants in and around Tokyo, and the military decided it would be cheaper to build a new one on the island.

The factory was established in 1929 and went on to produce over six kilotons of mustard and sneezing gas, which were shipped to Kitakyushu, weaponized, and used almost exclusively in warfare with China. 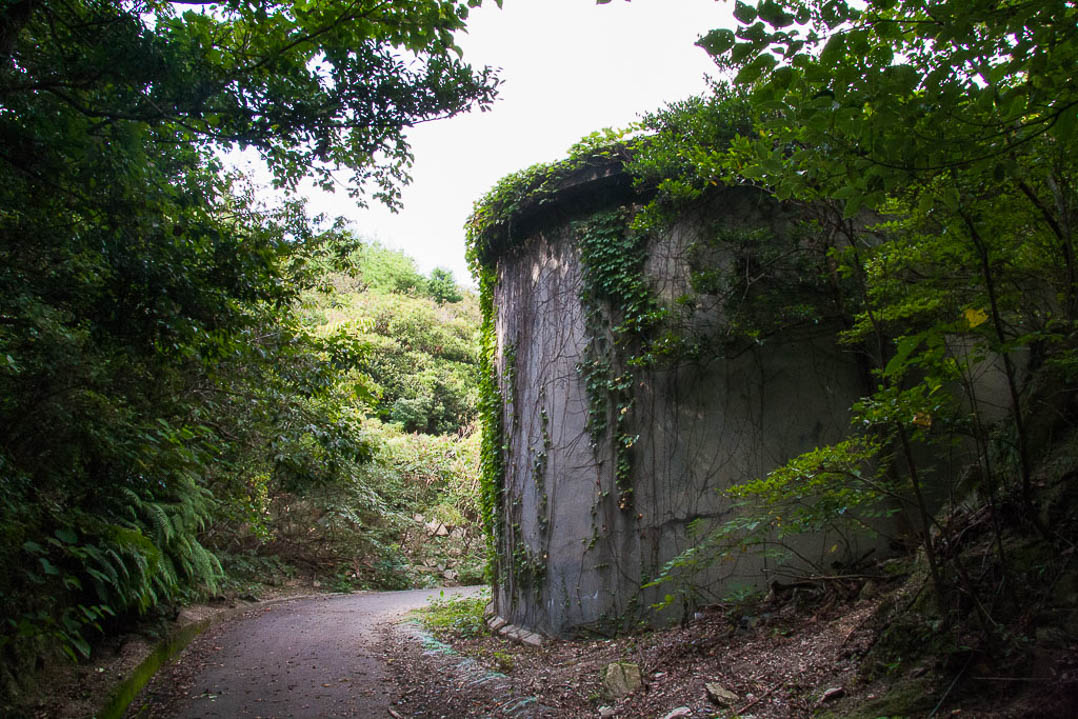 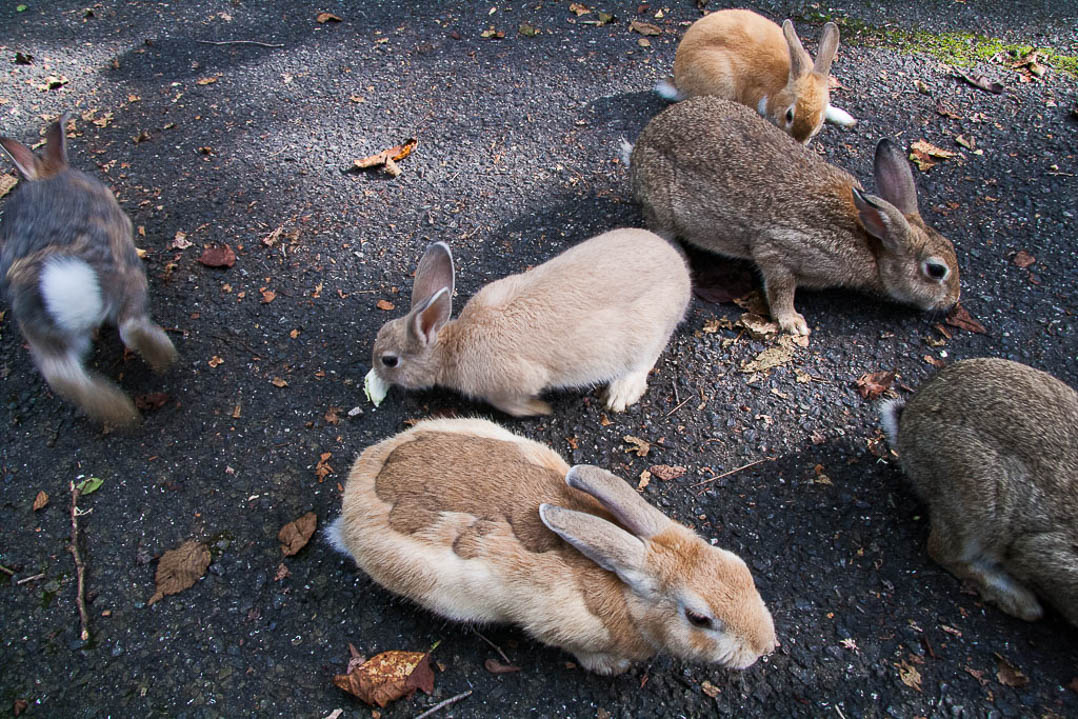 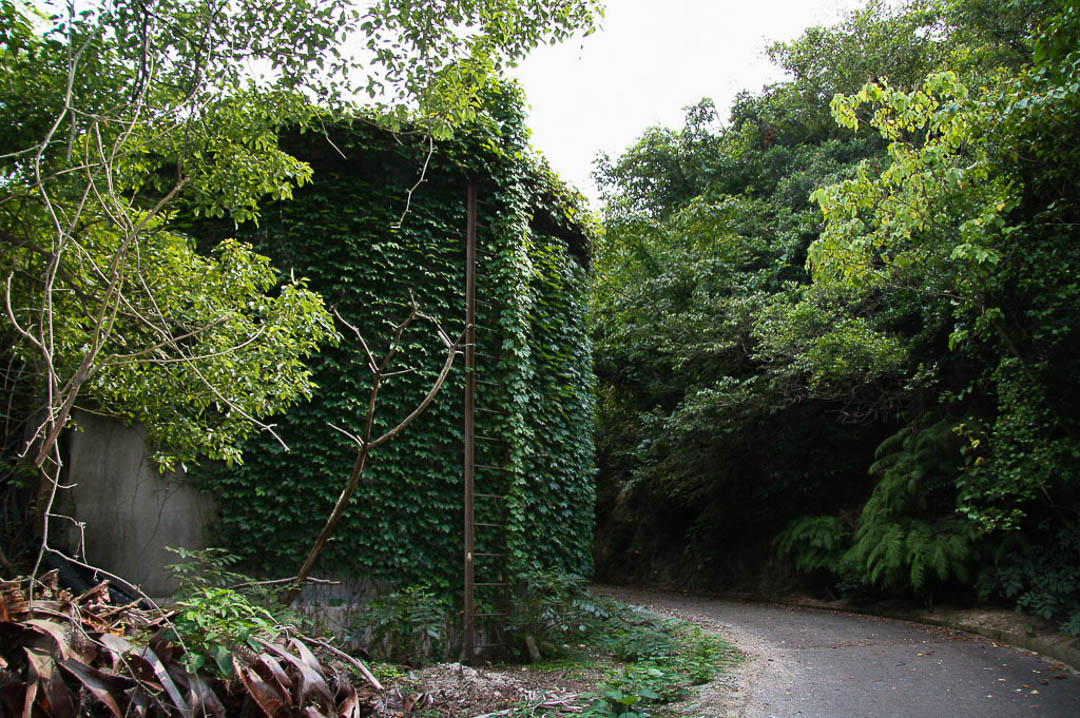 The operation was kept a secret and the island was removed from unclassified maps in 1938. The 6,000 workers employed at the plant were on a need-to-know basis and some have testified that they didn’t even know at first what they were producing, referring to the two poisons only by colour – red for sneezing gas and yellow for mustard.

At the end of the war, documents concerning the operations at Ōkunoshima were burned and the factory was destroyed. The Allied forces disposed the gas via dumping, burning or burying and no one was ever prosecuted. 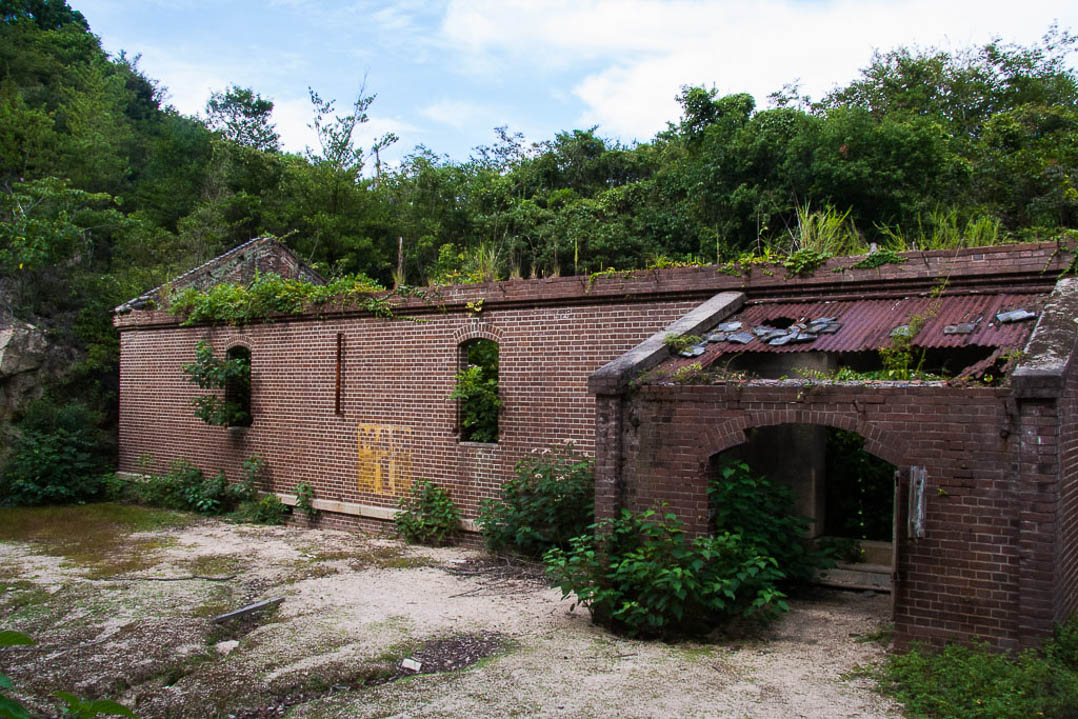 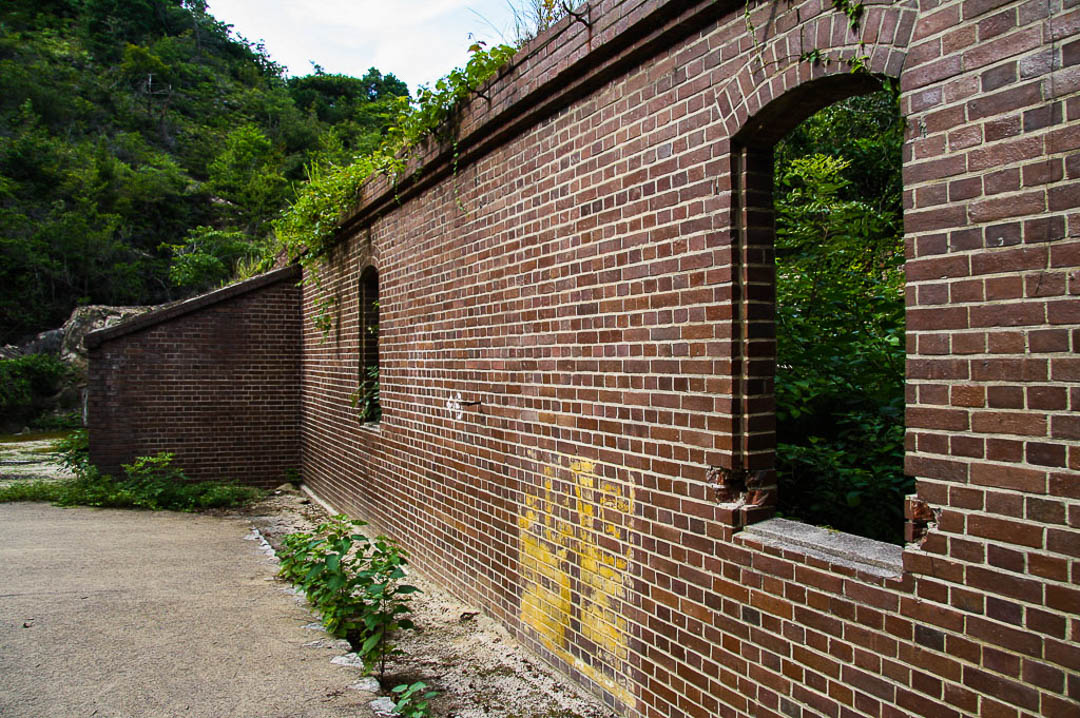 Decades later, however, local government and residents opened the Poison Gas Museum on the island to inform people about what went on during the war, featuring examples of the weapons themselves, equipment used by the factory, worker’s diaries and photographs.

It has been argued that the island may not be completely safe since there was never an official decontamination and there are rumours of sealed locations which still contain poisons left from the war. It is advised that visitors stay on the official walkways and paths, but I would be lying if I said we complied with that suggestion. 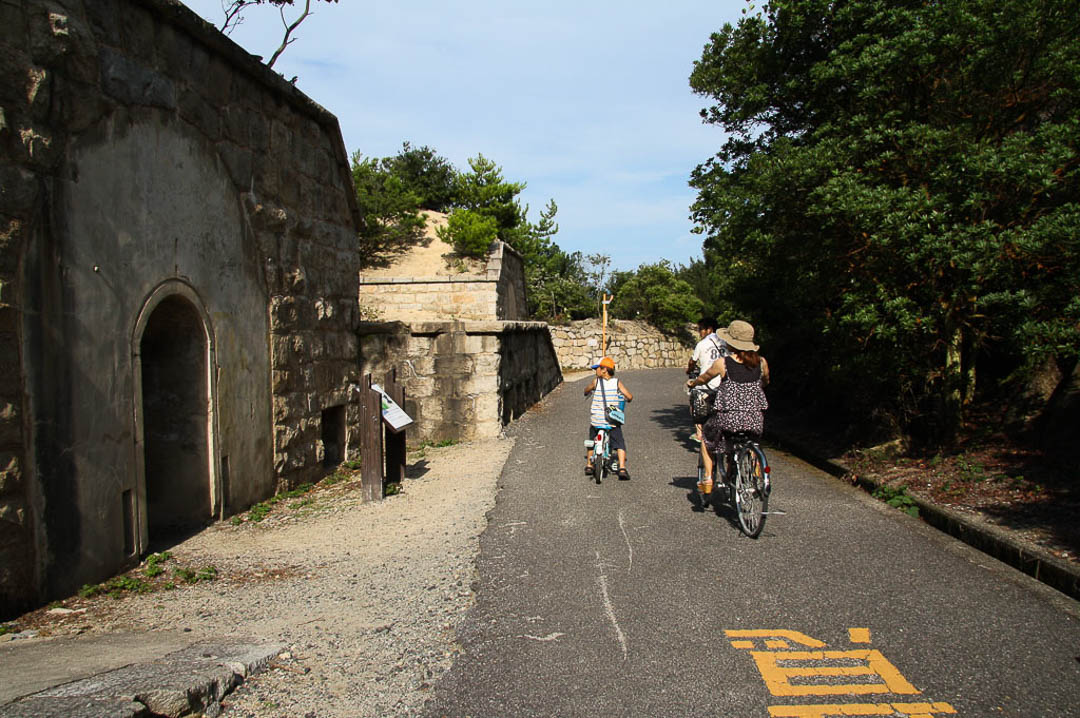 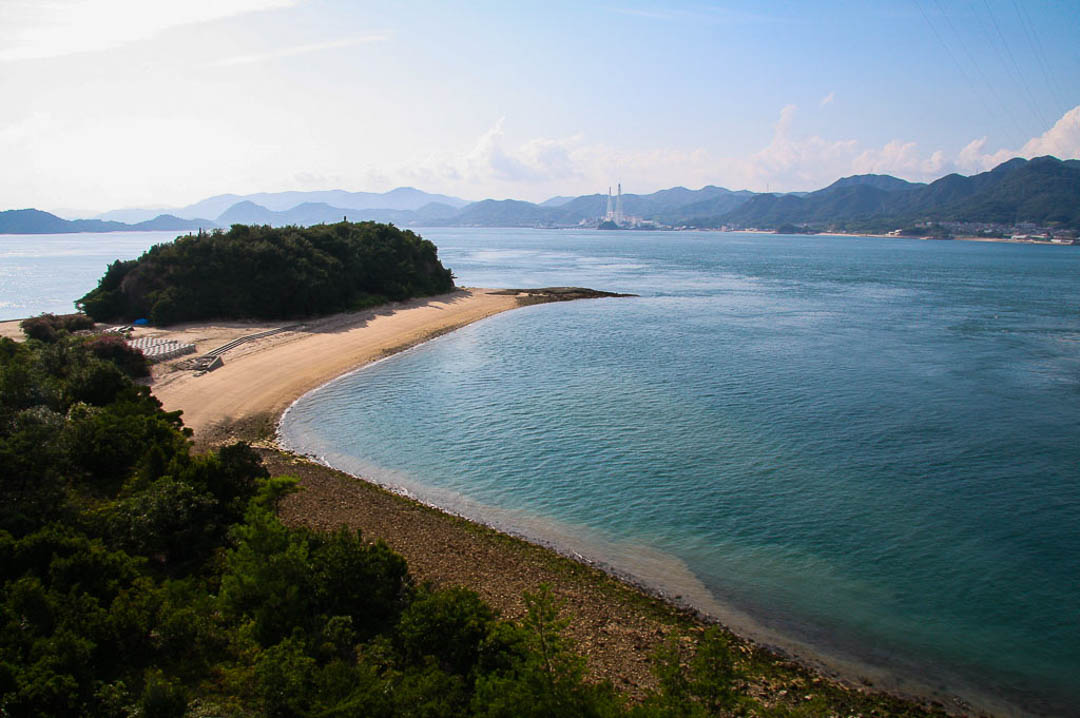 I don’t know what it is about abandoned buildings that gets me all excited (if you follow my blog you might have picked up on this morbid fascination of mine) but it’s something that the Japanese can appreciate – the word for ‘ruin’, haikyo, is also used to describe the hobby which the west terms urban exploration.

It wasn’t long before the sun got the best of me though – Mark had to coach me to the end of our hike to the top of the the island. We had seen just a hatch on the way up (no information, one of the sealed locations perhaps?) and a couple of bunnies, and the shower of sweat I was drenched in had me ready to give up. But then we reached the observation deck and the view made up for it all.

Isn’t it ironic, I pondered as I sat down to catch my breath, that a place integral to the death of over 80,000 people is now teeming with life. 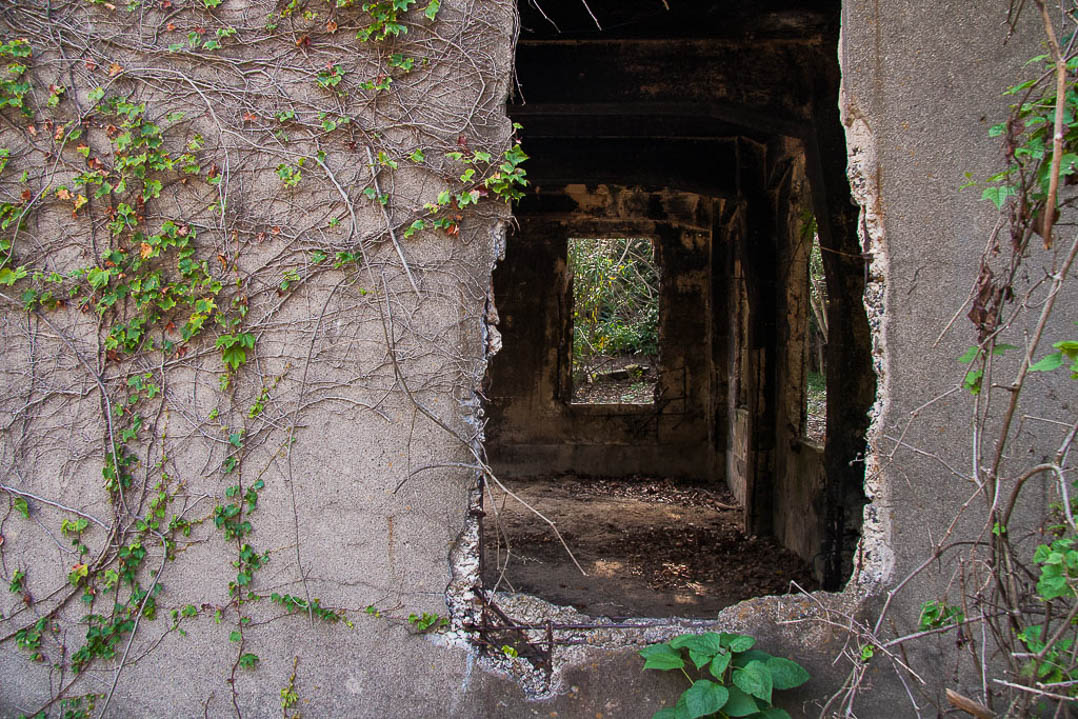 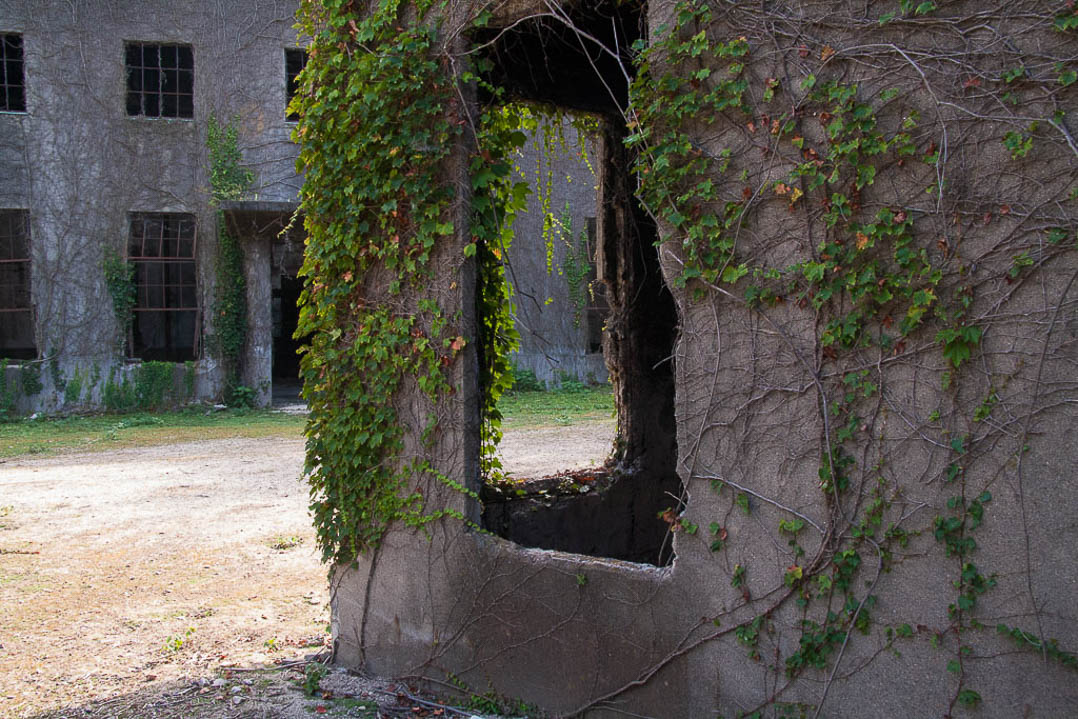 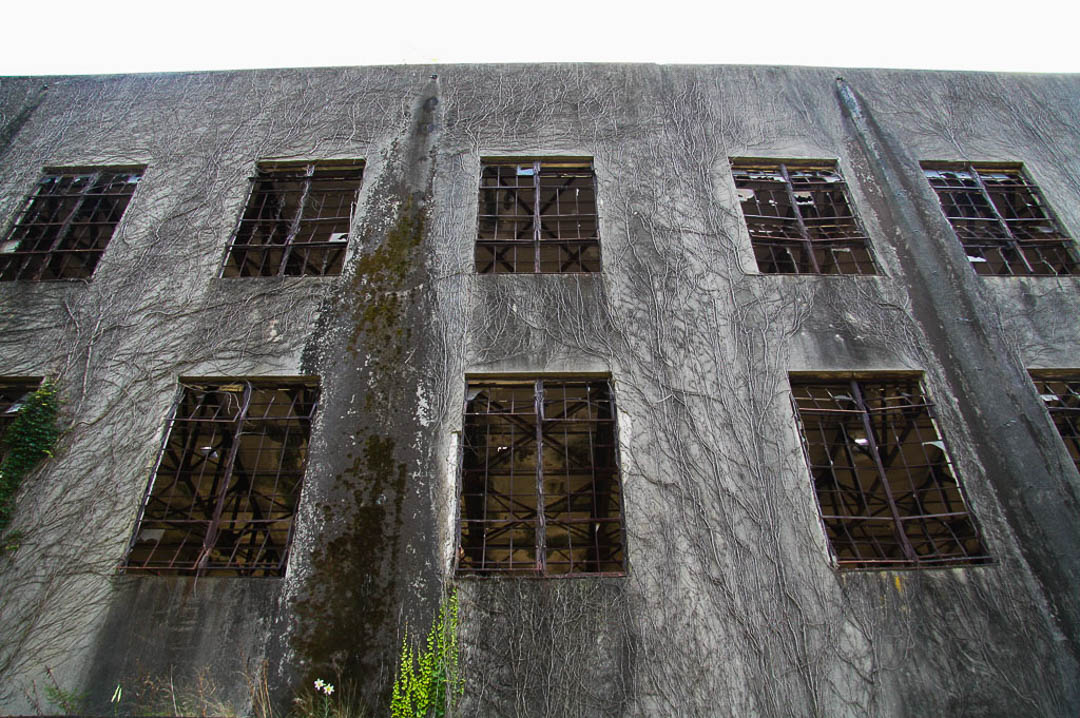 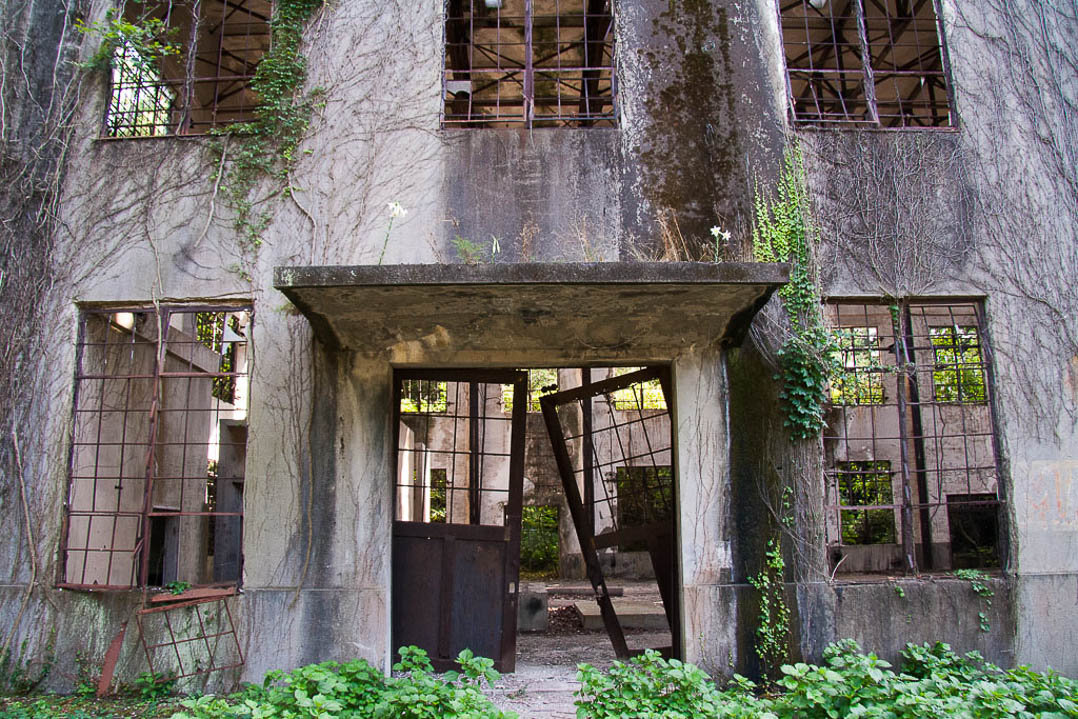 On the way back down, we discovered the best locations yet and Mark enjoyed retorting how my complaining had been for nothing. We also got to enjoy the crowds of bunnies we had been expecting from the hundreds of photos of the island that do the rounds on the Interwebs. If you go for the rabbits alone, I would suggest visiting in the winter.

Located right next to the sea, off a stone pier, is the most impressive of the island’s ruins: the old factory itself. Three storeys high and still largely intact, it’s hauntingly beautiful. Interestingly, the sign outside is the only one written solely in Japanese. 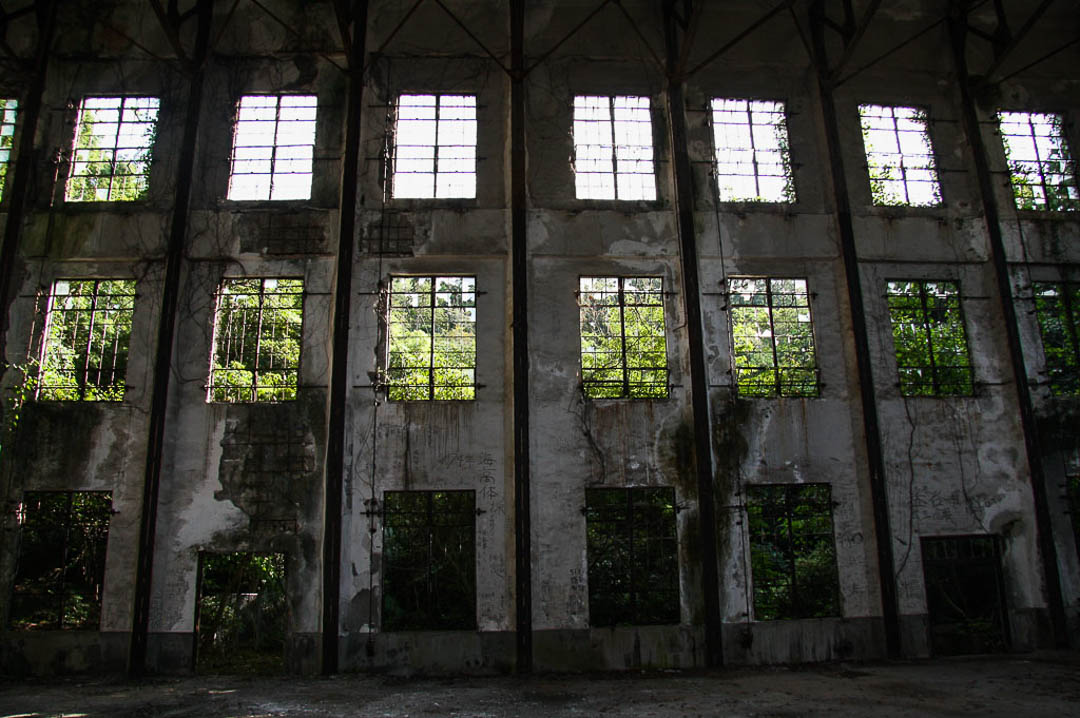 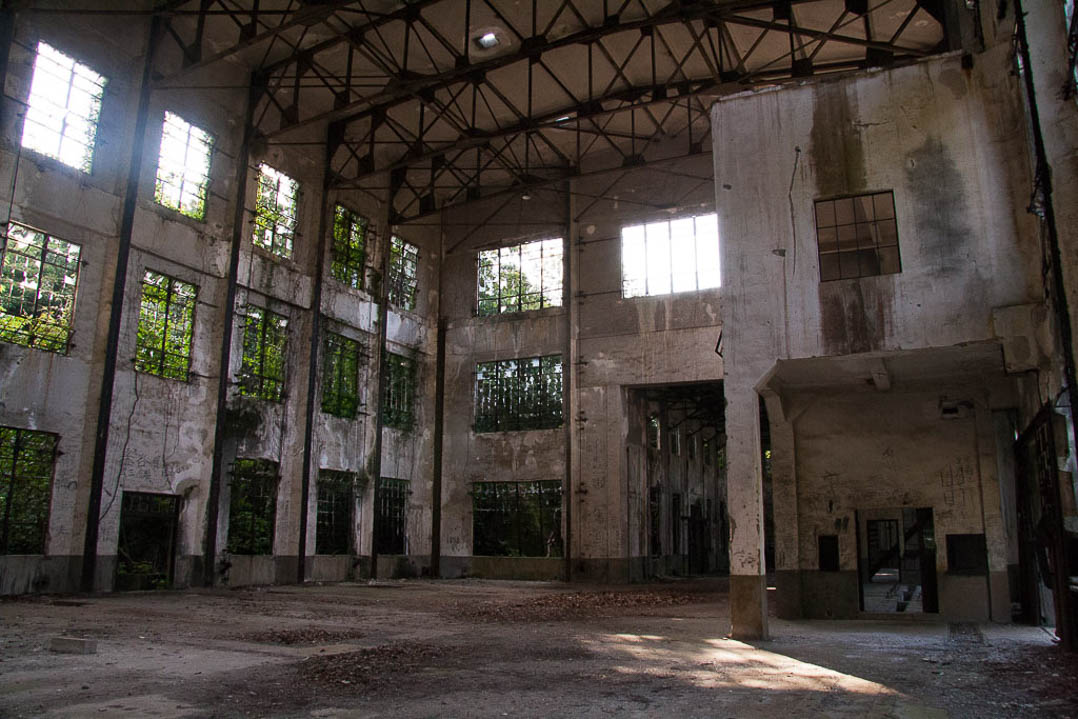 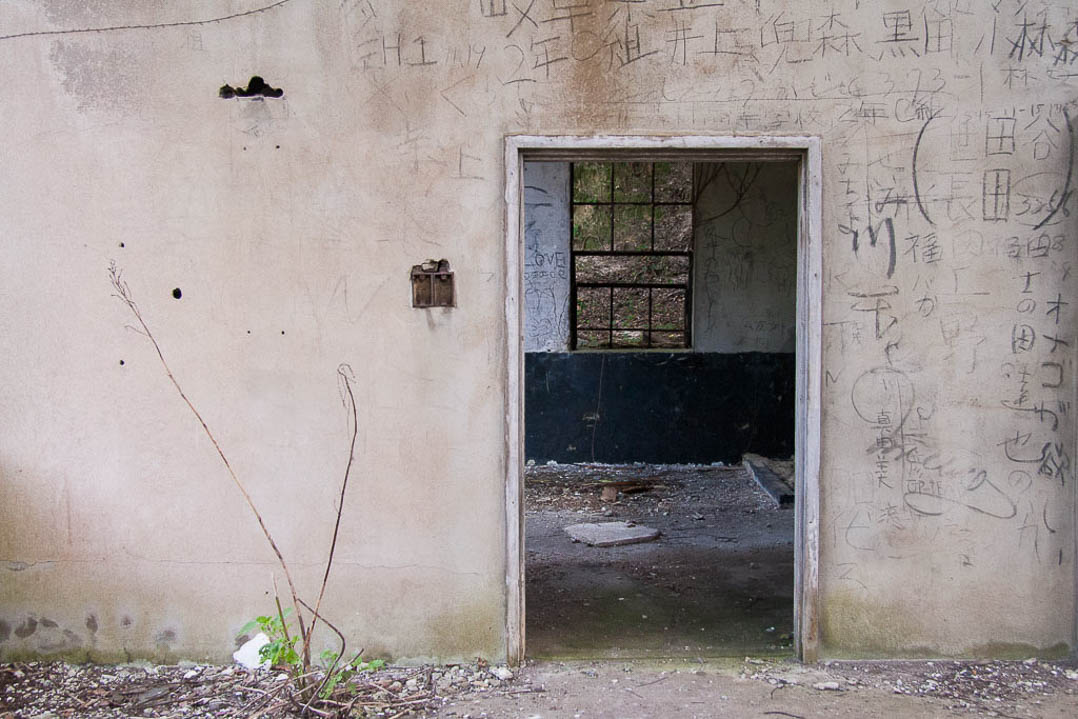 Sweaty, tired and miles away from anyone who might know me, I left any fucks I had left to give on the pathway and ventured inside to get a good look. After gazing out at the glorious view from the pier, we then got in line to catch a ferry back to the mainland. 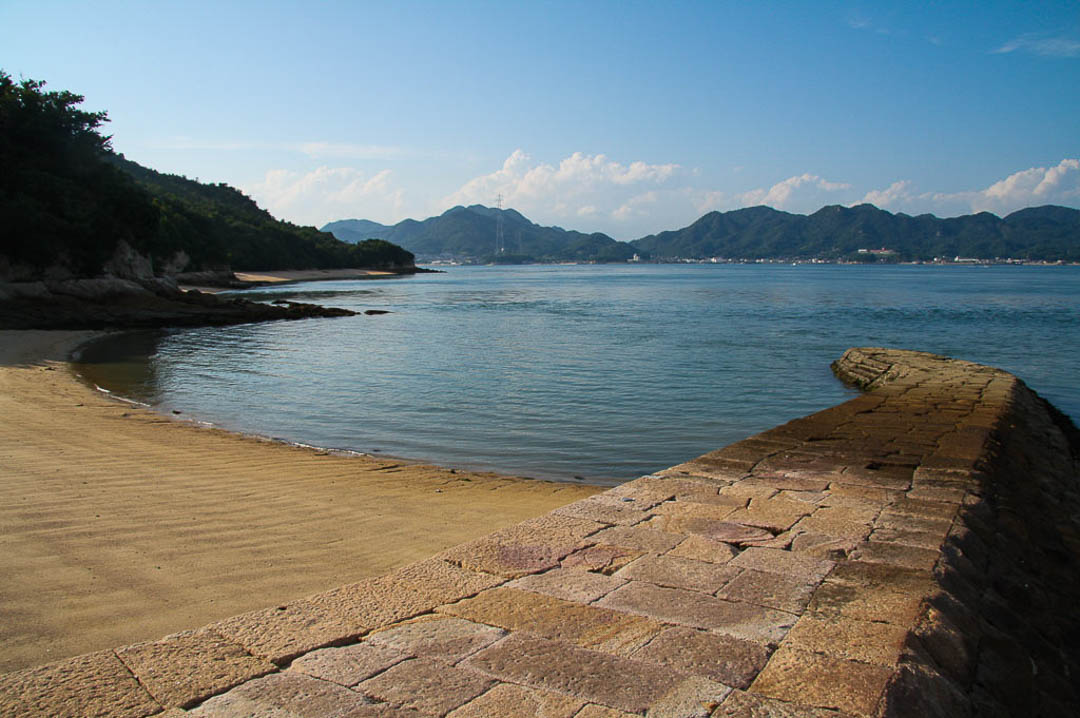 Wonderful blog and great information about visiting Rabbit Island! I just went there this week and had a lovely time meeting the rabbits and exploring the island’s dark past. The abandoned buildings were incredibly fascinating, despite what happened there. Thanks for all the great information and I really like your pictures! I hope you don’t mind but I linked your blog on my own about Rabbit Island.

Simonereply
– In reply to: Tam

Thanks for your comment and the link, Tam! Glad to hear you had as good of a time as we did 🙂