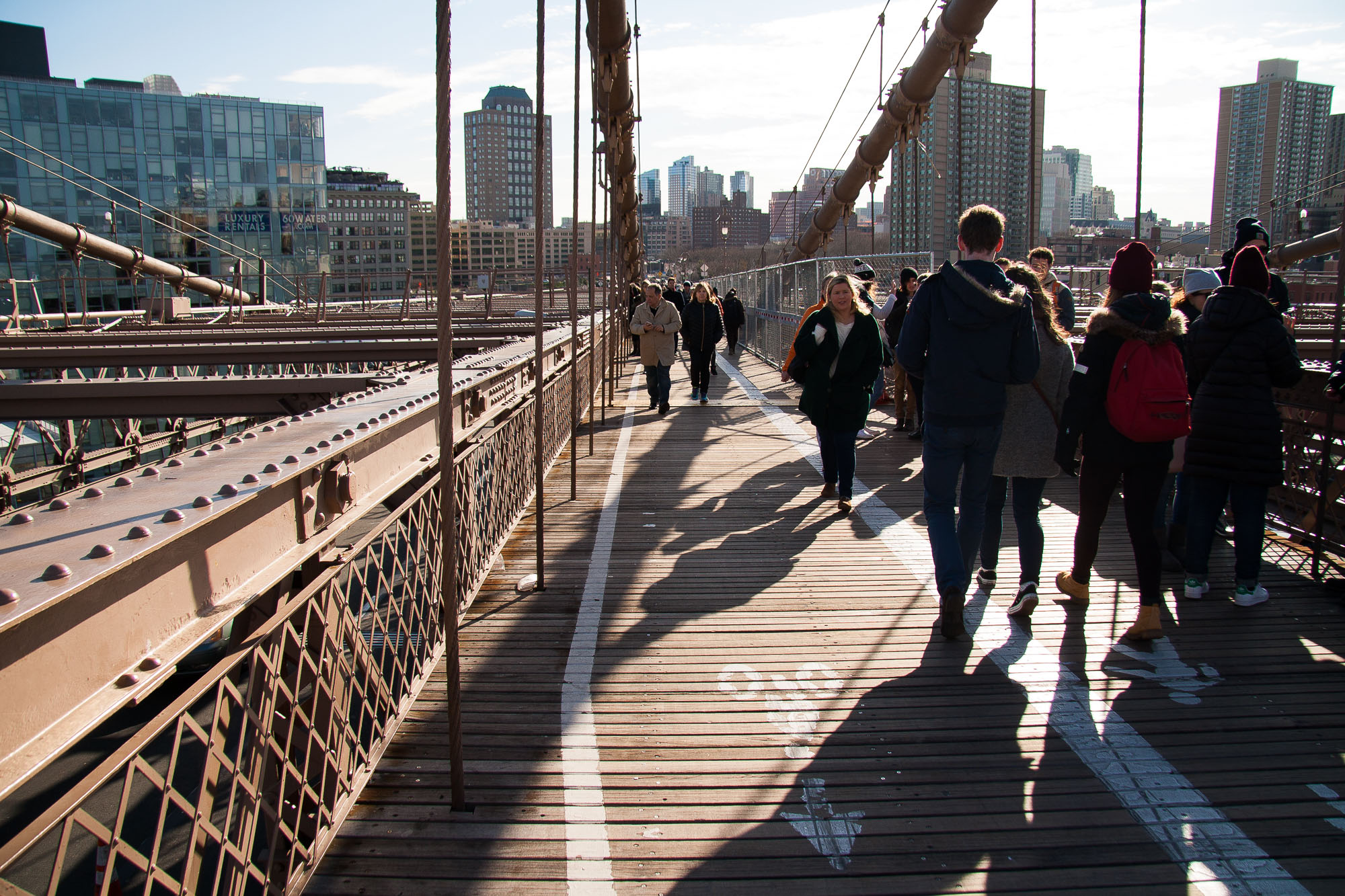 One hour. That’s how long it takes to walk from Manhattan to Brooklyn. Or Brooklyn to Manhattan, depending on which side of the Brooklyn Bridge you stand. We were on the Manhattan side, at City Hall, ready to make the 1,825 meter trek along with hundreds of tourists who were also taking advantage of the sun. It was the first clear day in a week, and also the coldest – perfect for taking pictures.

My sister began doling out instructions on how to walk across the bridge (read: how to not piss off the locals) as we crossed Park Row. There’s always potential for you to fuck something up as a visitor in New York; it’s like you’re constantly showing up to write a test that you didn’t study for.

“Get out of the bike lane!” 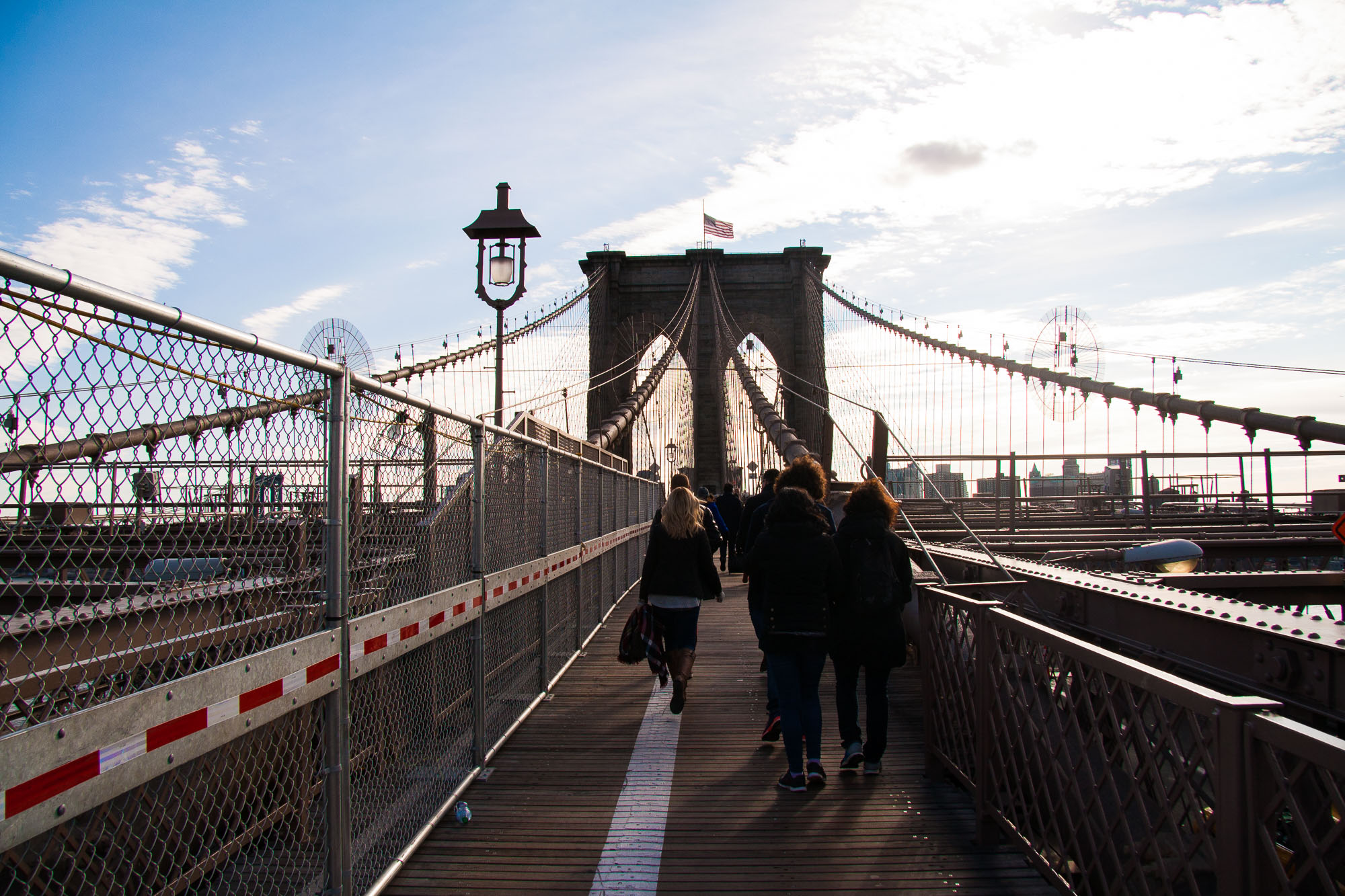 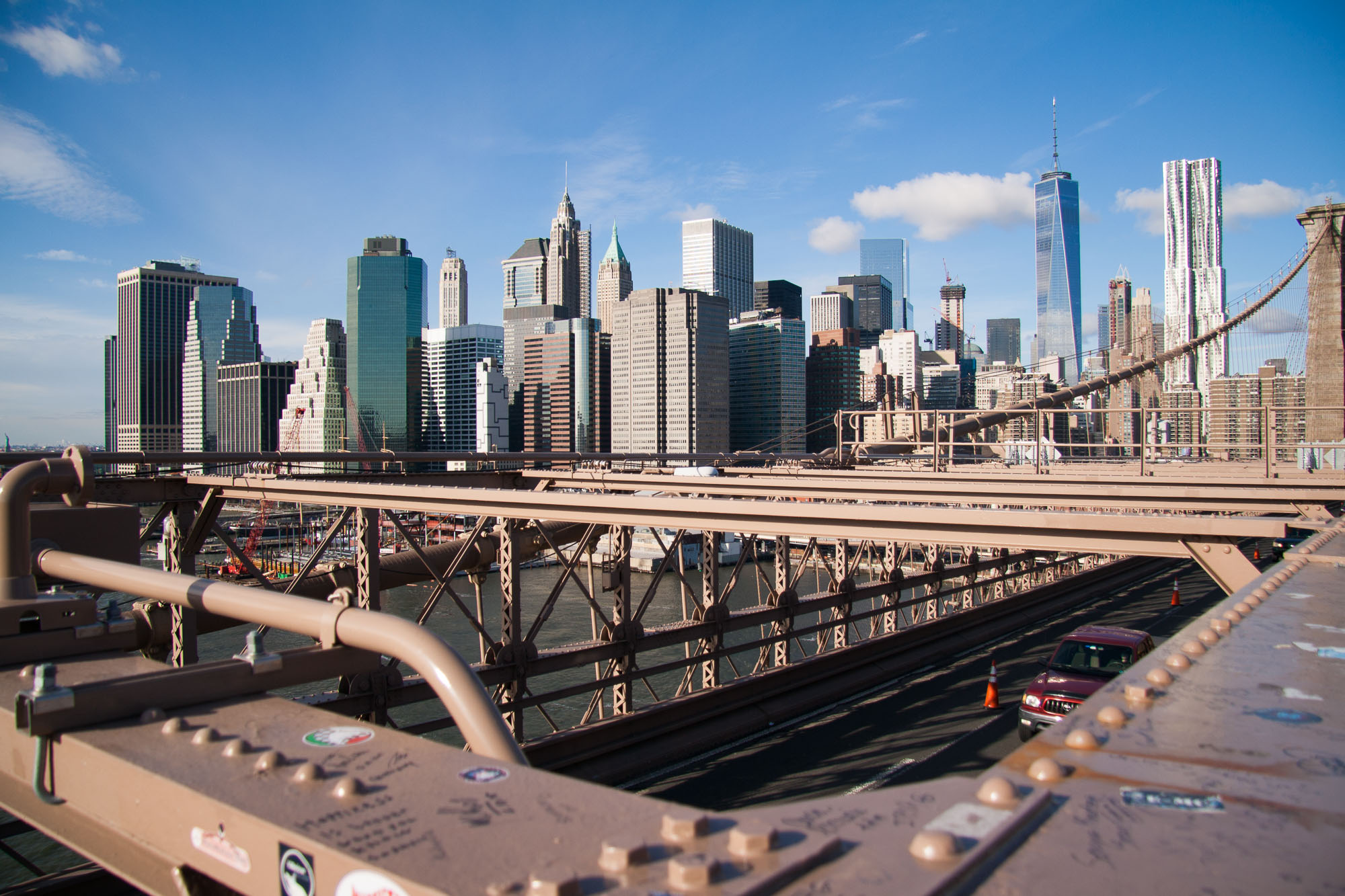 The designated pedestrian walkway was built above the roadway and carries about 4,000 pedestrians and 2,600 cyclists every day. I was yolo-ing a shot in the middle of it and simultaneously scanning the bridge for other places I could squeeze into for a picture when I accidentally crossed over to the dark side.

In Japan, people have an enormous amount of respect for cameras and the people behind them; they take their pictures and then graciously move aside so that you can take yours. Not in New York. My lens had already been knocked into my chest once and I was now covering it like I do my drinks at a bar.

Forget the bike lane; we need one that’s DSLR-only. 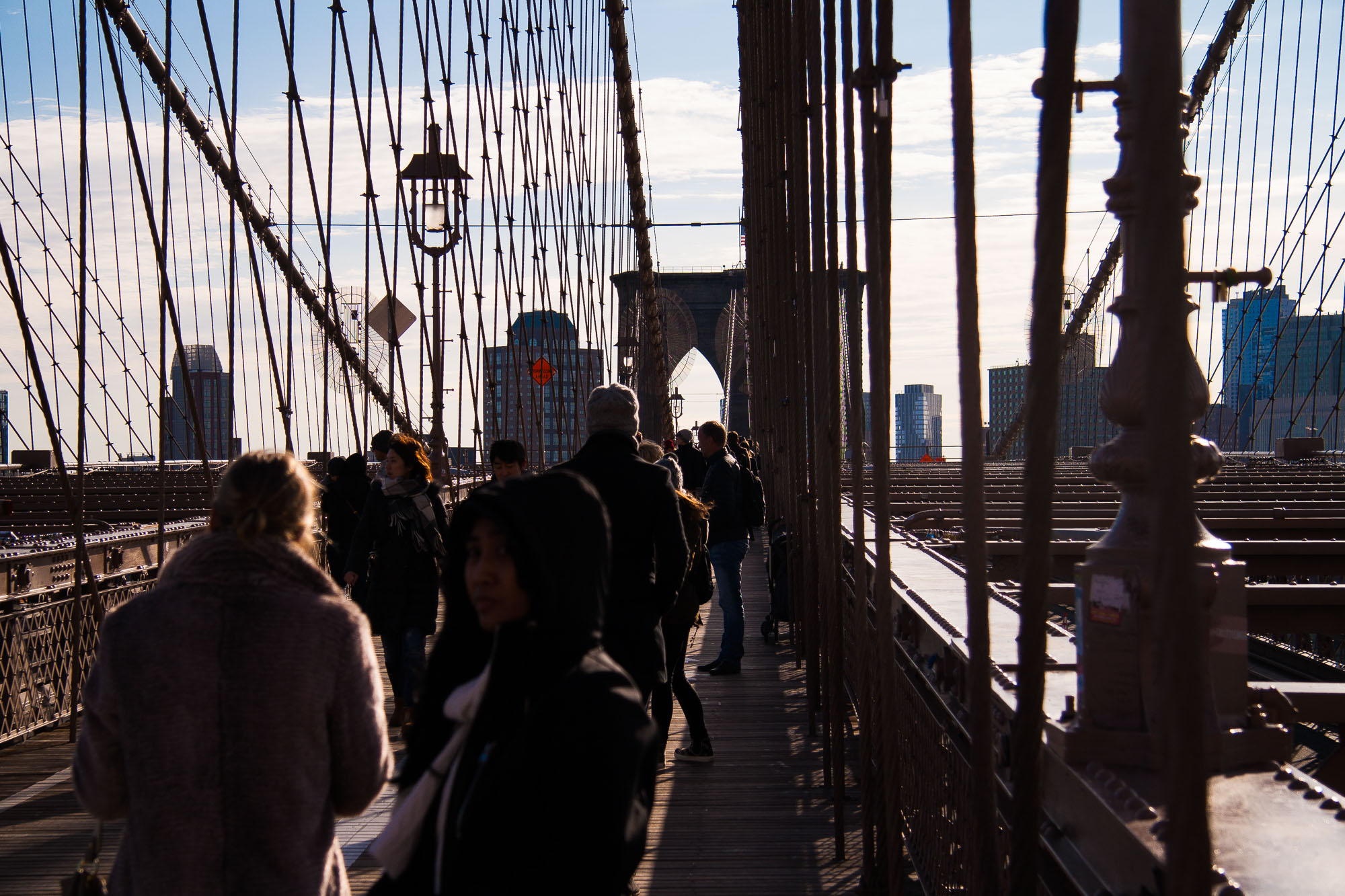 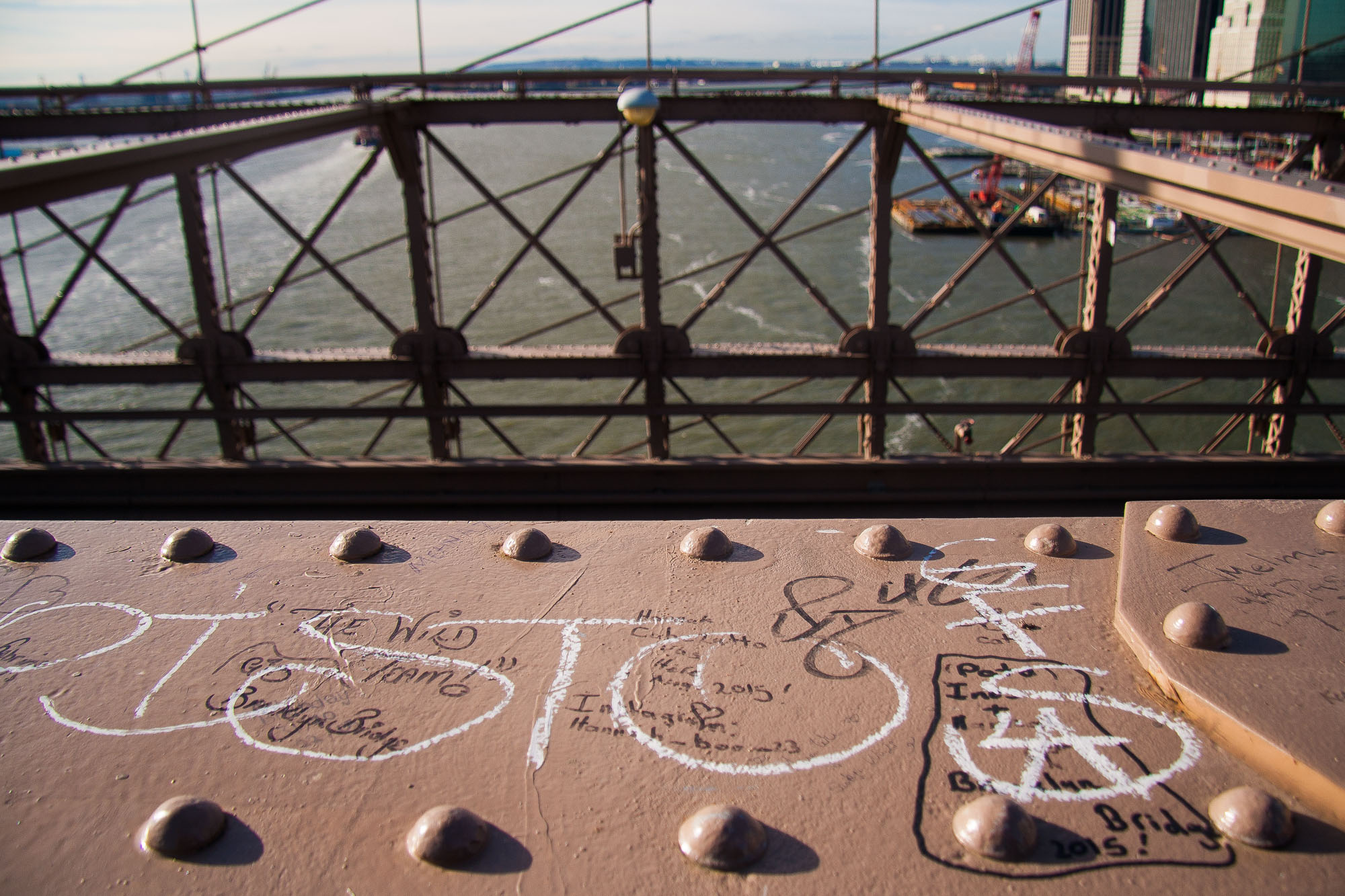 Nevertheless, it’s best to steer clear of the former. Cyclists speed down the walkway with a vengeance that is clear in its warning; move or die. And this bridge is no stranger to death.

Twenty-seven workers lost their lives during its 14-year construction, which began in 1870 . But the bridge claimed its first victim before ground even broke on the project – ironically, its creator, John A. Roebling.

The German-born engineer was surveying the Brooklyn side of the East River when a boat ran into the ferry slip where he was standing. His right foot was crushed in the accident and his toes had to be amputated. He contracted tetanus shortly after the procedure and died just 28 days later. 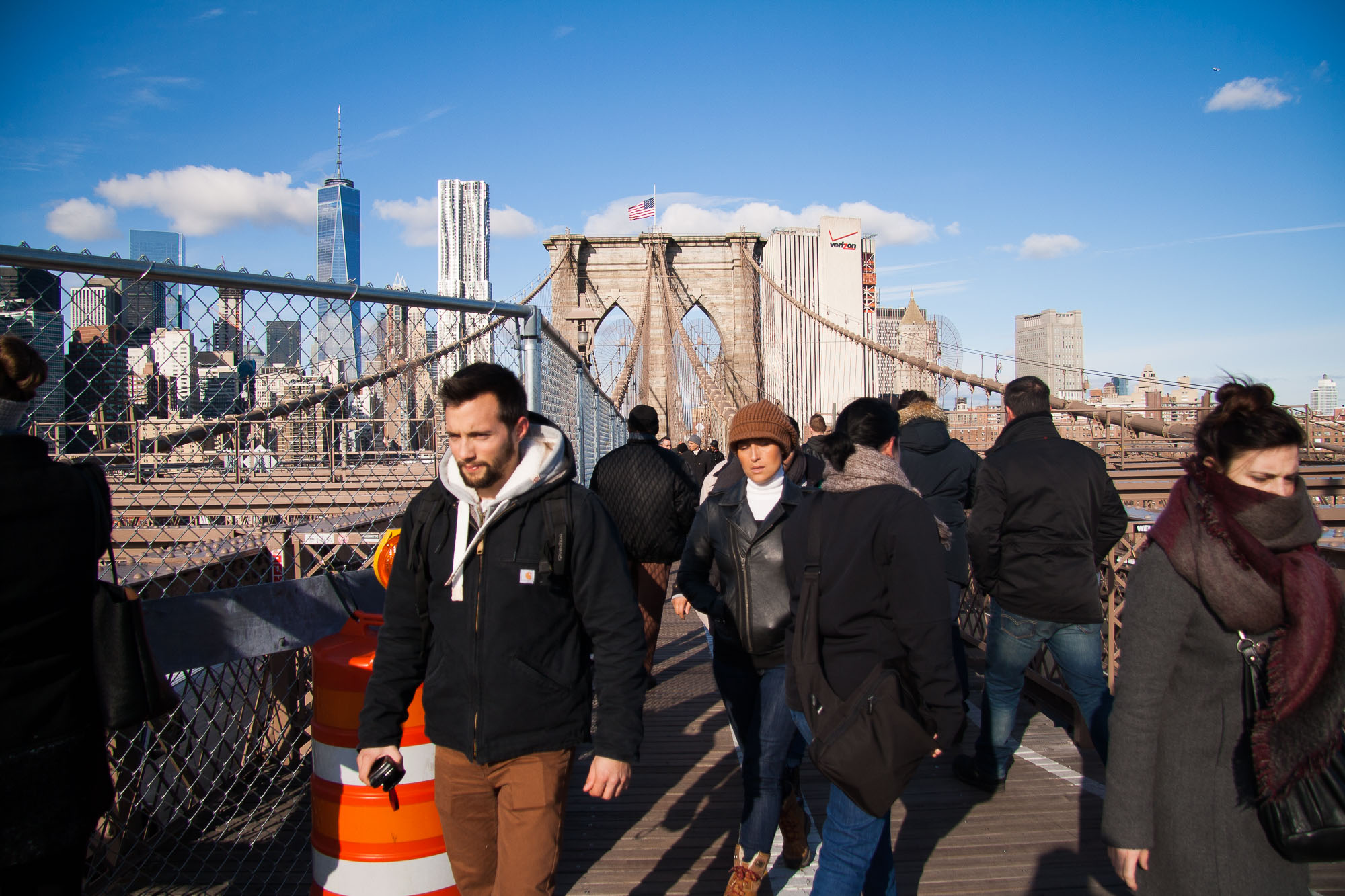 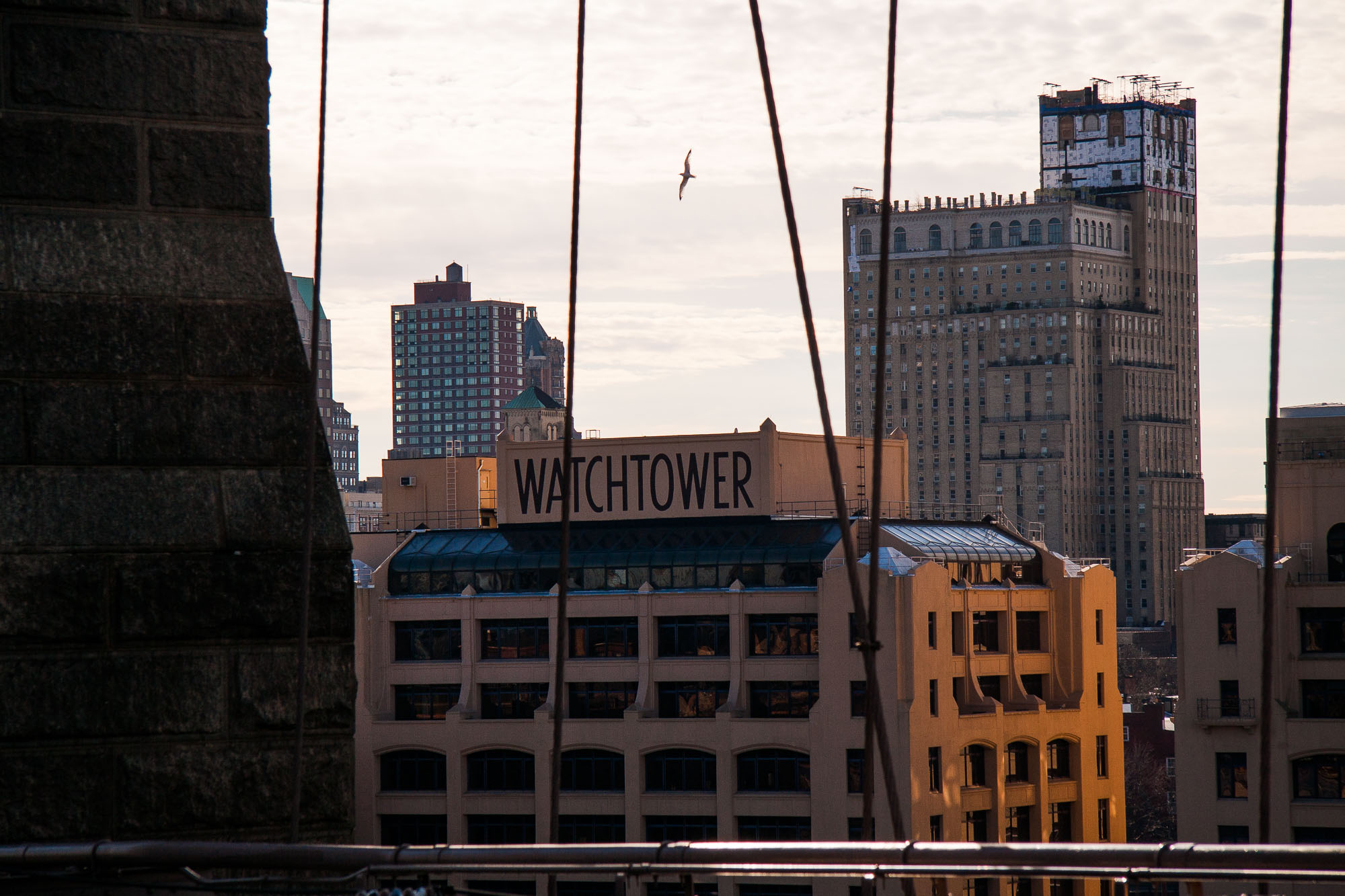 Roebling’s son, Washington, took over construction but he, too, faced a similar fate. He contracted what is today known as “the bends” after battling a fire that broke out of one of the caissons he had built for the workers to dig out the riverbed. The disease, which struck hundreds of employees and killed at least 5, left Washington bedridden for the next 13 years of his life.

He continued to oversee construction from his home in Brooklyn, where he also battled a morphine addiction. His wife, Emily, carried his notes to and from the workers on the bridge and eventually became an engineer in her own right.

Emily became the first person to cross the bridge when it opened on May 24, 1883. But even then, the deaths didn’t stop. 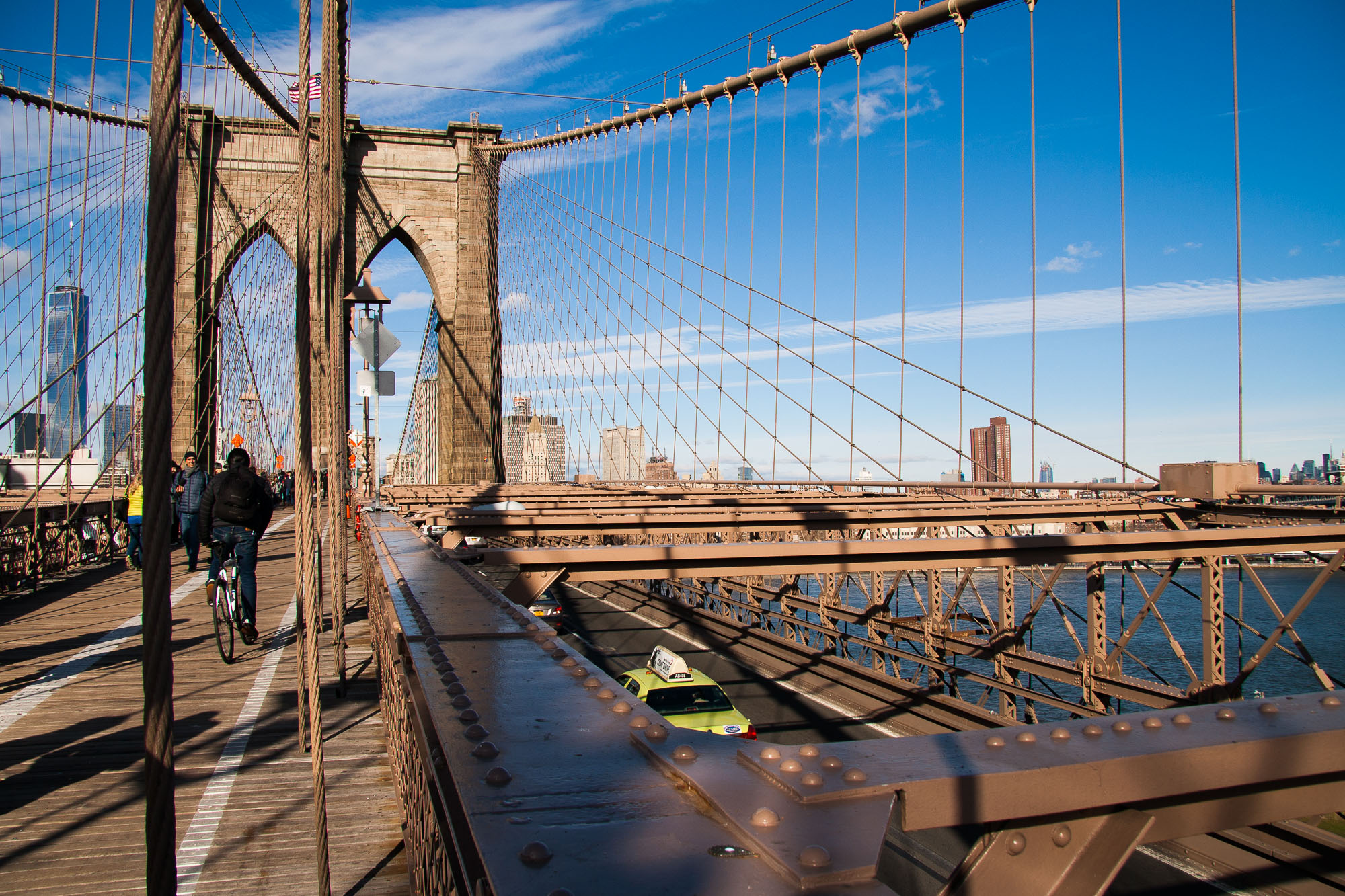 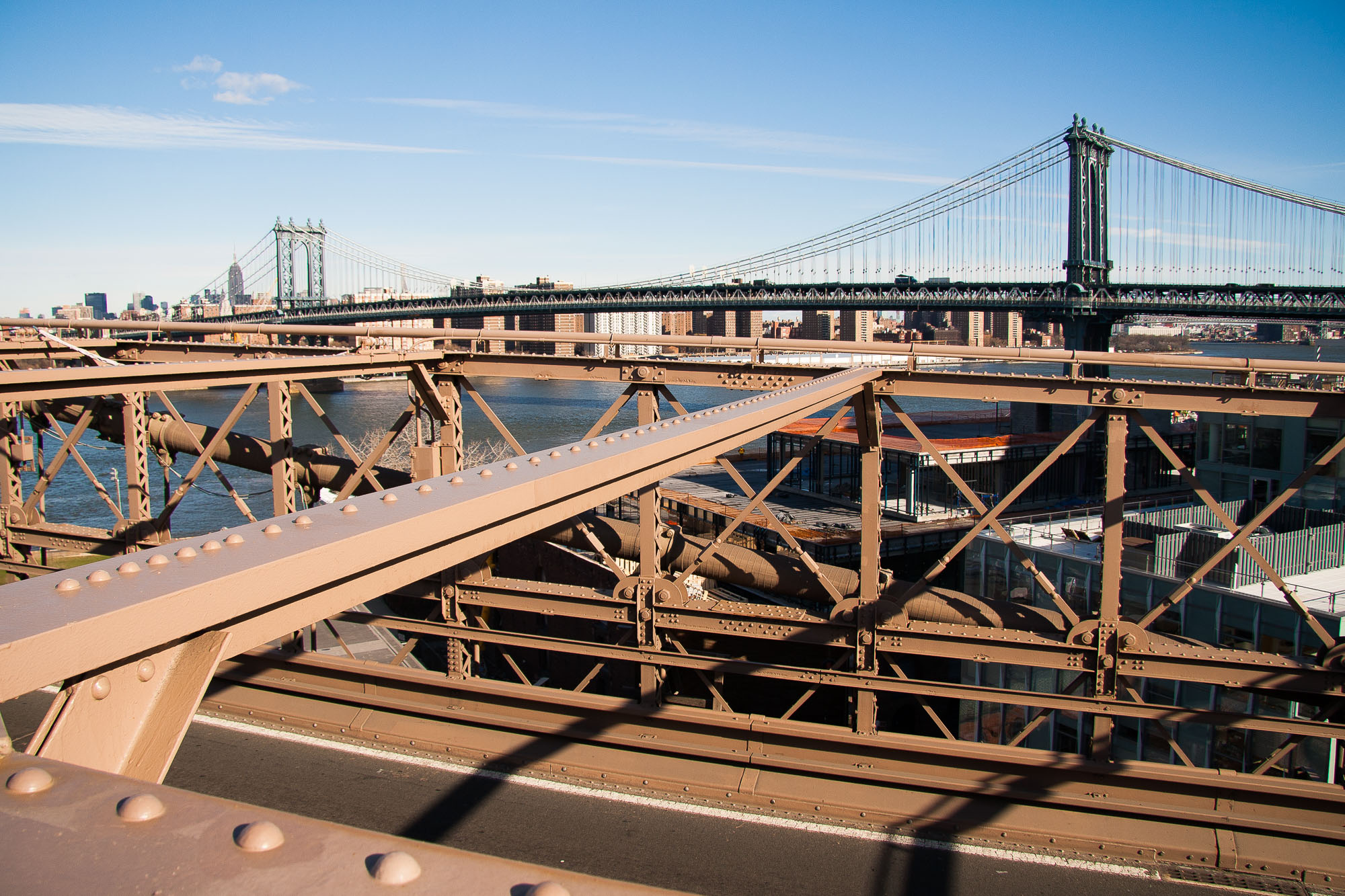 On Memorial Day of the same year, a woman fell down the stairs on the pedestrian walkway. As she lost her footing, another woman screamed and the people on the bridge broke out in a panic thinking the bridge was about to collapse. In the ensuing stampede, 12 people were trampled to death.

A year later, Robert E. Odlum became the first person to die from jumping off the bridge, in a safety demonstration gone wrong.

But not all the stories about the Brooklyn Bridge are tragic ones. They’re as weird and wonderful as New York City itself. The tremendous developer’s debt, for example, was repaid by renting out two wine cellars underneath the Manhattan and Brooklyn sides of the bridge for $1,000 and $500, respectively.

It cost $15 million at the time to complete construction, which works out to about $3.5 billion today. One of the cellars was nicknamed “The Blue Grotto” and was decorated with frescos of vineyards in Italy, France and Spain. Unfortunately, both were closed to the public in the 1930s. 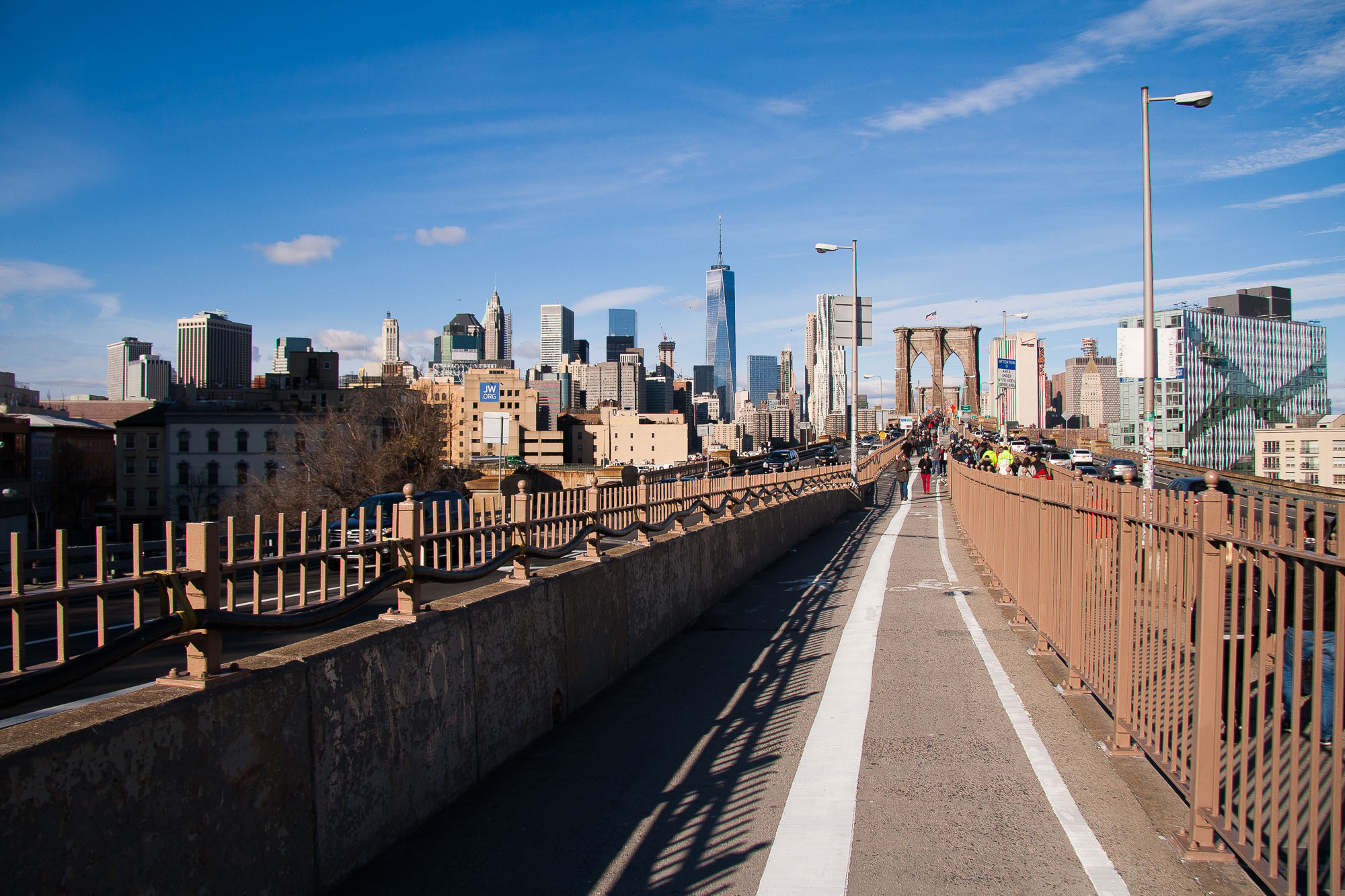 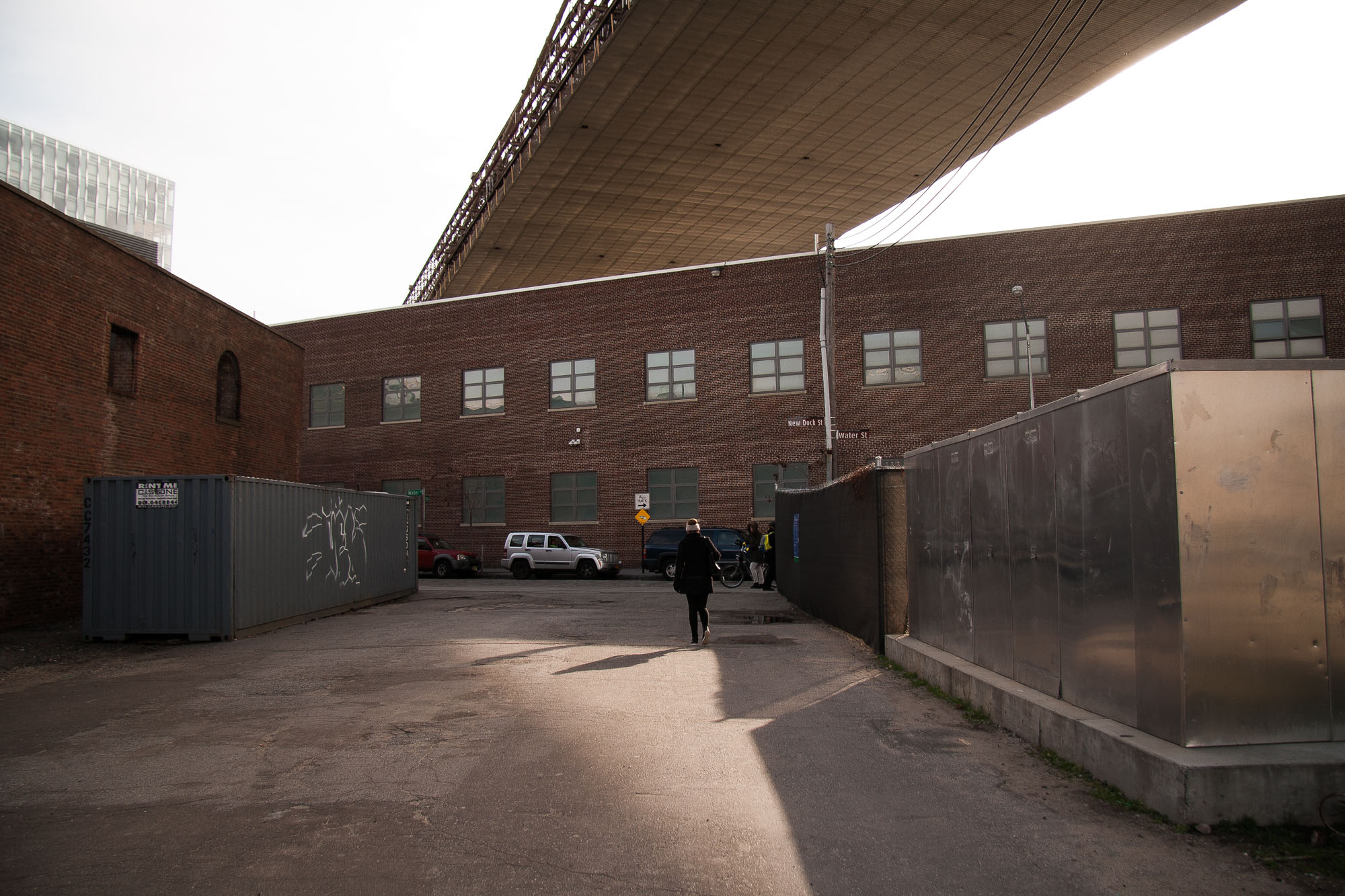 A con artist by the name of George C. Parker also sold the bridge – more than once. He set up fake offices and produced forged documents to prove that he was the owner, then convinced buyers they could make a great deal of money from controlling access to the roadway. The police had to be called several times to remove toll booths set up by the bridge’s new “owners”.

And in 2006, city workers discovered a hidden bunker in one of the masonry foundations on the Manhattan side of the bridge that dates back to the Cold War. The vault was stockpiled with water drums, medical supplies, paper blankets, drugs and 352,000 crackers.

Decades-old crackers. How yum! We munched on biltong instead as we exited on the Brooklyn side and made our way down to the park.

There, on a bench looking across the Hudson at that celebrated skyline, I scored those 10 points back. 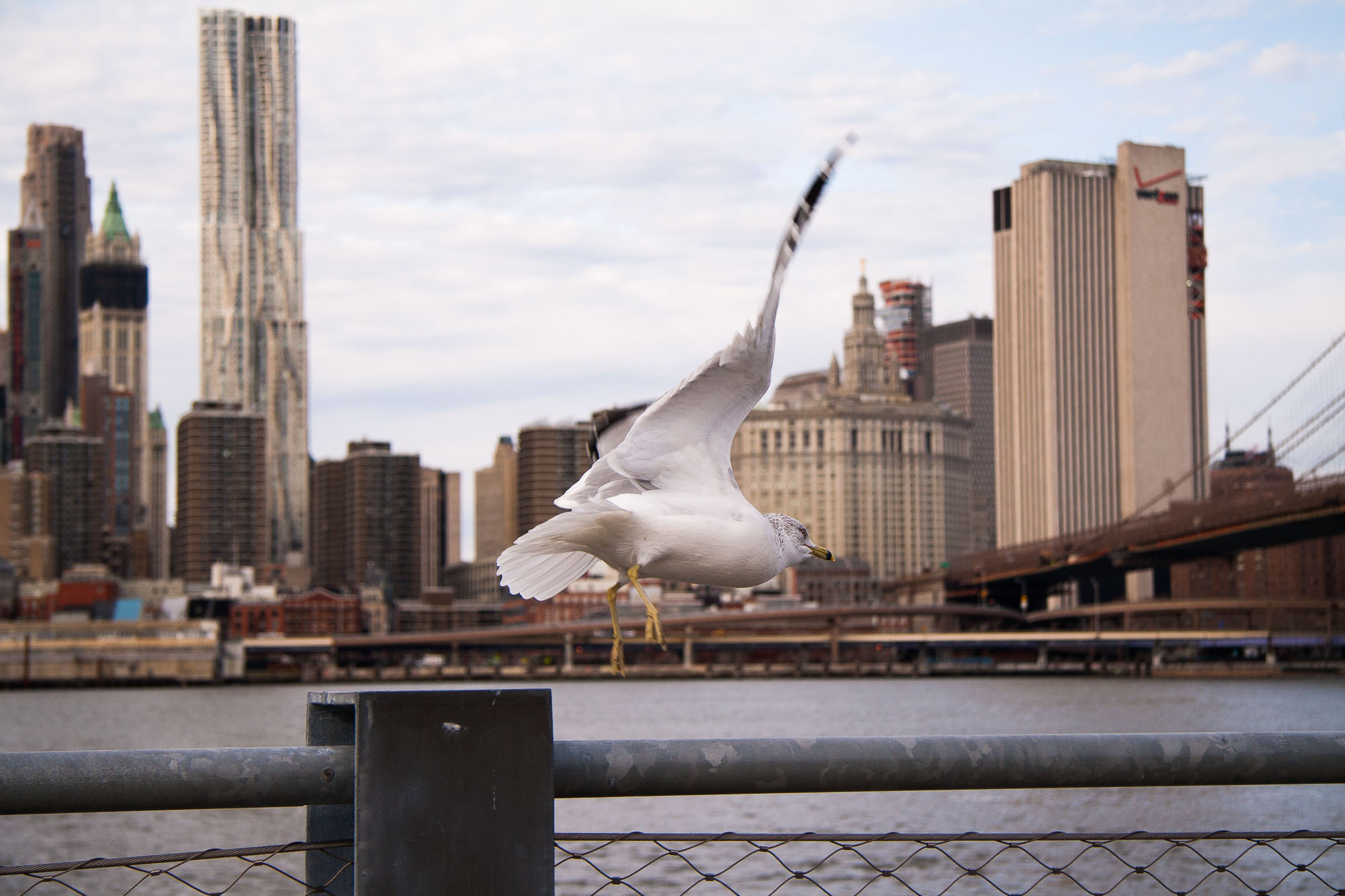 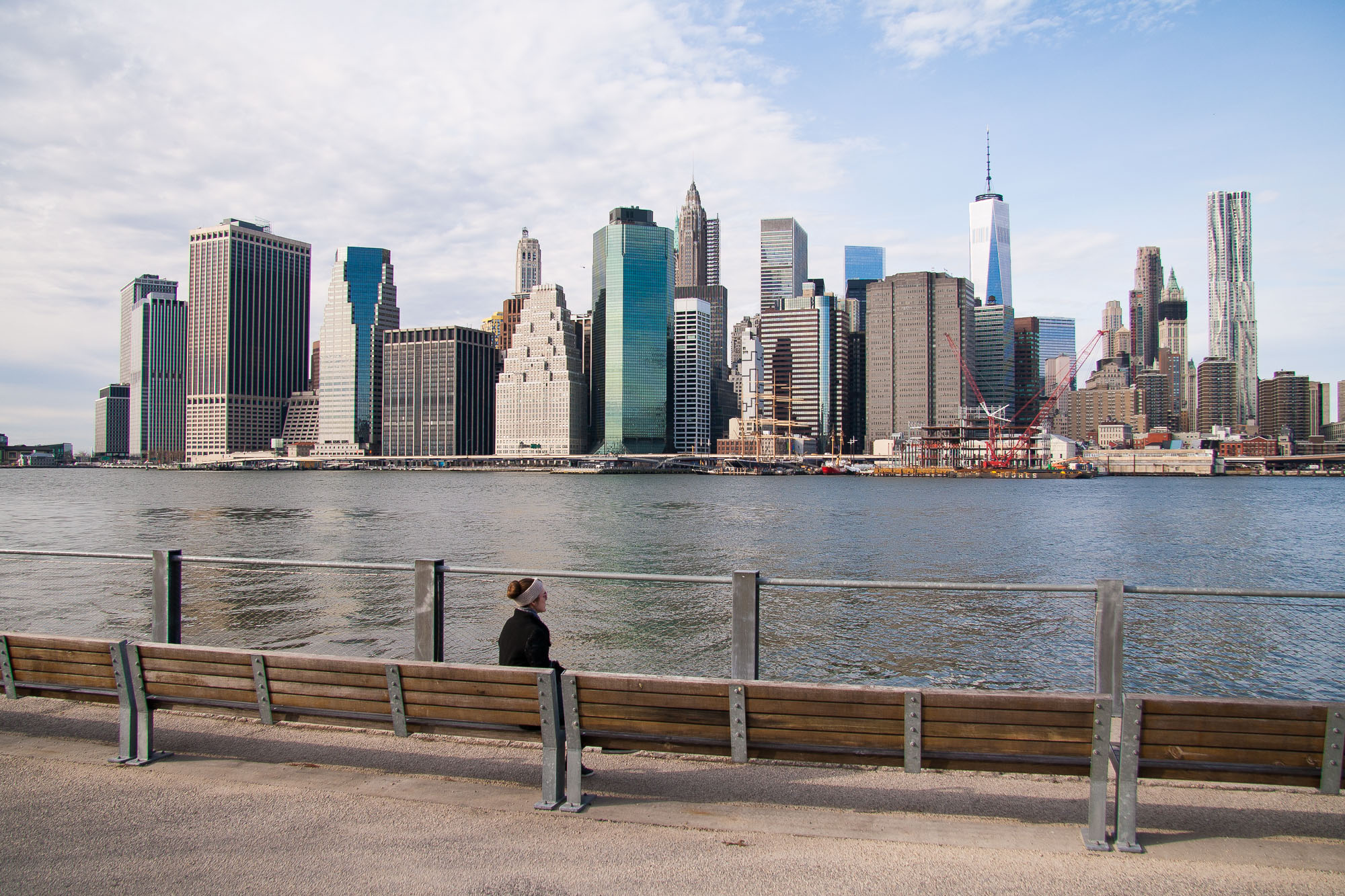 Manhattan to Brooklyn: Take the 4,5,6 train to Brooklyn Bridge/City Hall or the J, Z train to Chambers St. The bridge is across the street from both subway stations.
Brooklyn to Manhattan: Take the A,C train to High Street-Brooklyn Bridge. Go right on Pearl Street, then left on Prospect to Washington. The entrance to the underpass is on the left.