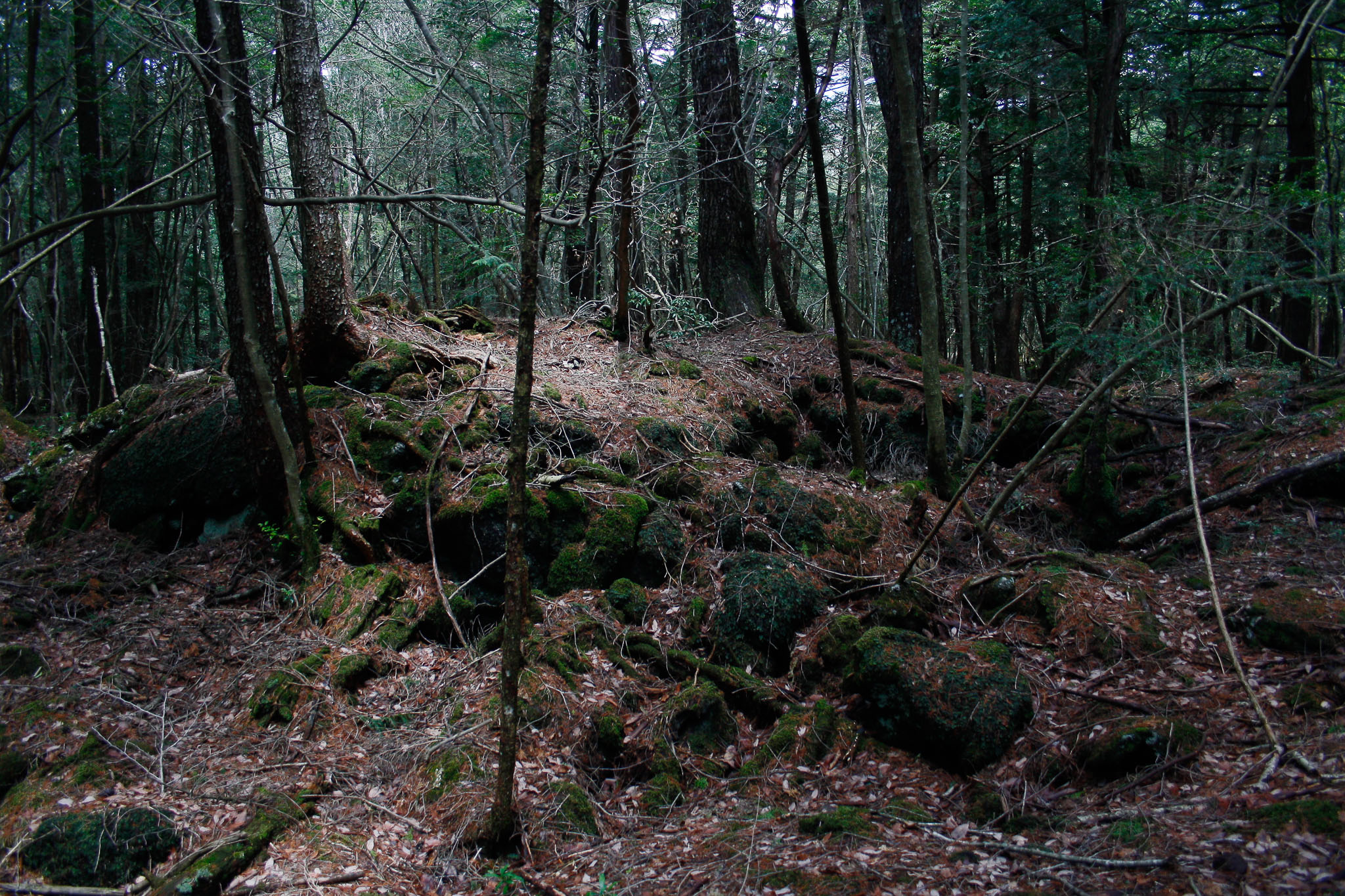 During Golden Week, John and I spent two nights on the smallest of the Fuji Five lakes. Lake Shoji faces Aokigahara, the notorious woodland that sprawls 30 square kilometers of Mt Fuji’s northwestern base. This is part one of our journey into Suicide Forest.

I’m not sure what I was expecting to see when John and I pulled up to the Saiko Bat Cave, but four busloads of schoolchildren wasn’t it. What I had pictured as a tiny building sitting on the edge of a misty forest, manned by a creepy old man selling tickets to an underwhelming cave in an attempt to distract visitors from the real horrors of Aokigahara was, by all accounts, false.

It was the rainy, misty weather that greeted us when we drove the Fuji Panorama Line to Lake Shoji the afternoon before that had allowed my imagination to run away with itself. Splicing through parts of the forest, the highway allows drivers and their companions to catch a glimpse of Aokigahara without having to actually set foot in it.

I had to press my nose up against the car window and squint past the droplets to see, but the forest was unmistakable. The twisting, overgrown roots were straight out of the photos I had seen on the web. I wondered if I might spot anything sinister through the marathon of trees racing by.

When we got to the lake, which faces the forest, it was difficult to see any of it. The rain was coming down hard and the water was almost invisible in the mist. I was suitably creeped out by the time we had checked in and settled into our room. 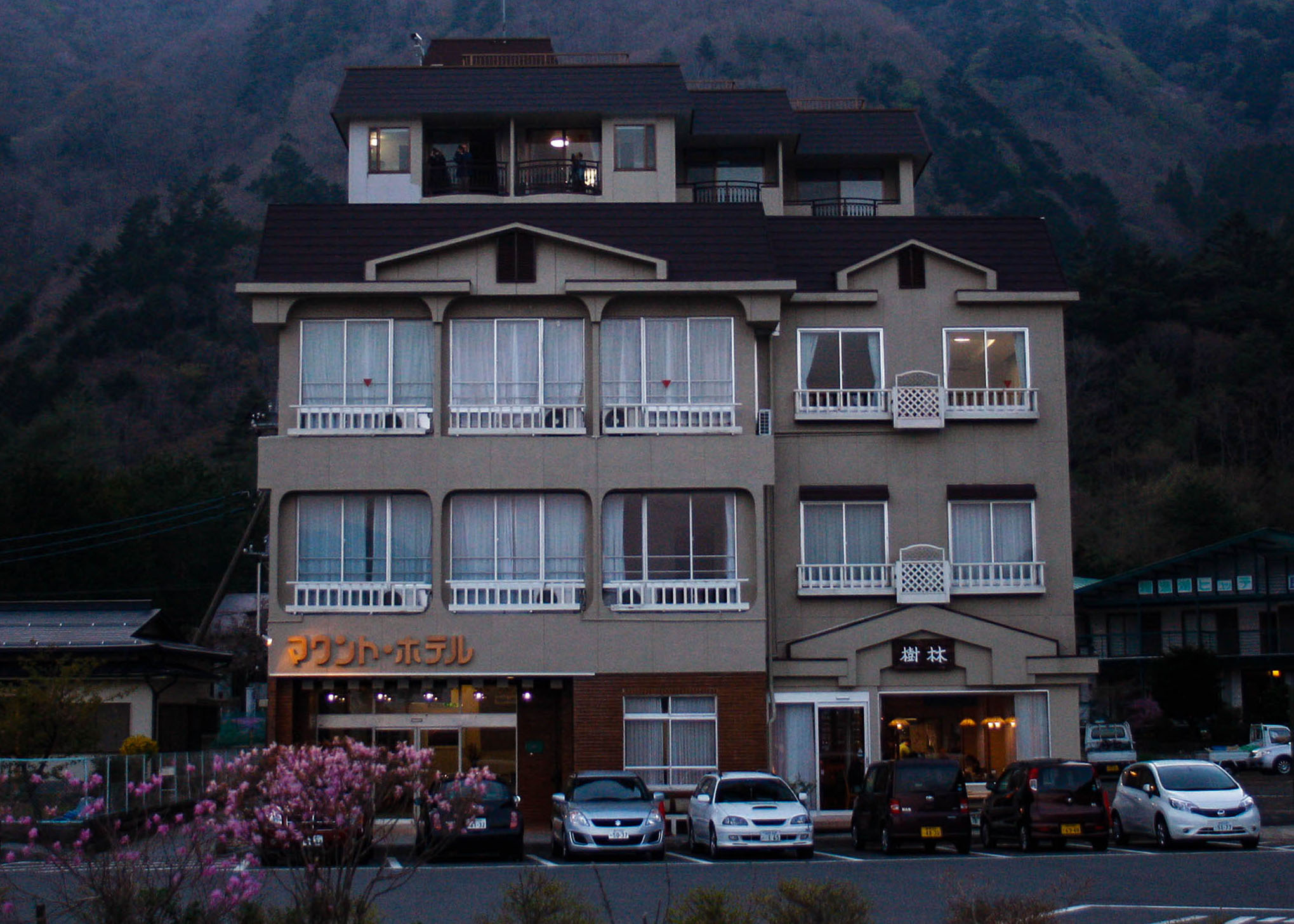 The hotel had all the makings for a horror movie; flickering florescent lights that illuminated different sizes of carpet stains in varying shades of brown; a door to an empty room standing wide open; dancing lines across my iPhone screen when taking photos; and the unshaken feeling that someone was watching me when I tried to get to sleep that night.

Whether the hotel was hosting a few non-physical guests or just old and in need of a remodel, I breathed a sigh of relief when the sun came up the next morning. It was, after all, the day we were going to venture into one of the creepiest places on earth.

Only a twenty-minute drive from our hotel, the Saiko Bat Cave is a popular entry point for the forest. The sun had sobered my imagination by the time we approached the steps of the very modern building, complete with a small gift shop and museum annex.

John approached a grim-looking mother-and-son tourist couple who had just emerged from the forest. I wondered secretly if all people look like that once (if?) they return from Aokigahara. Turns out she had a stomach ache and the cave was a lot further than he had bargained for. 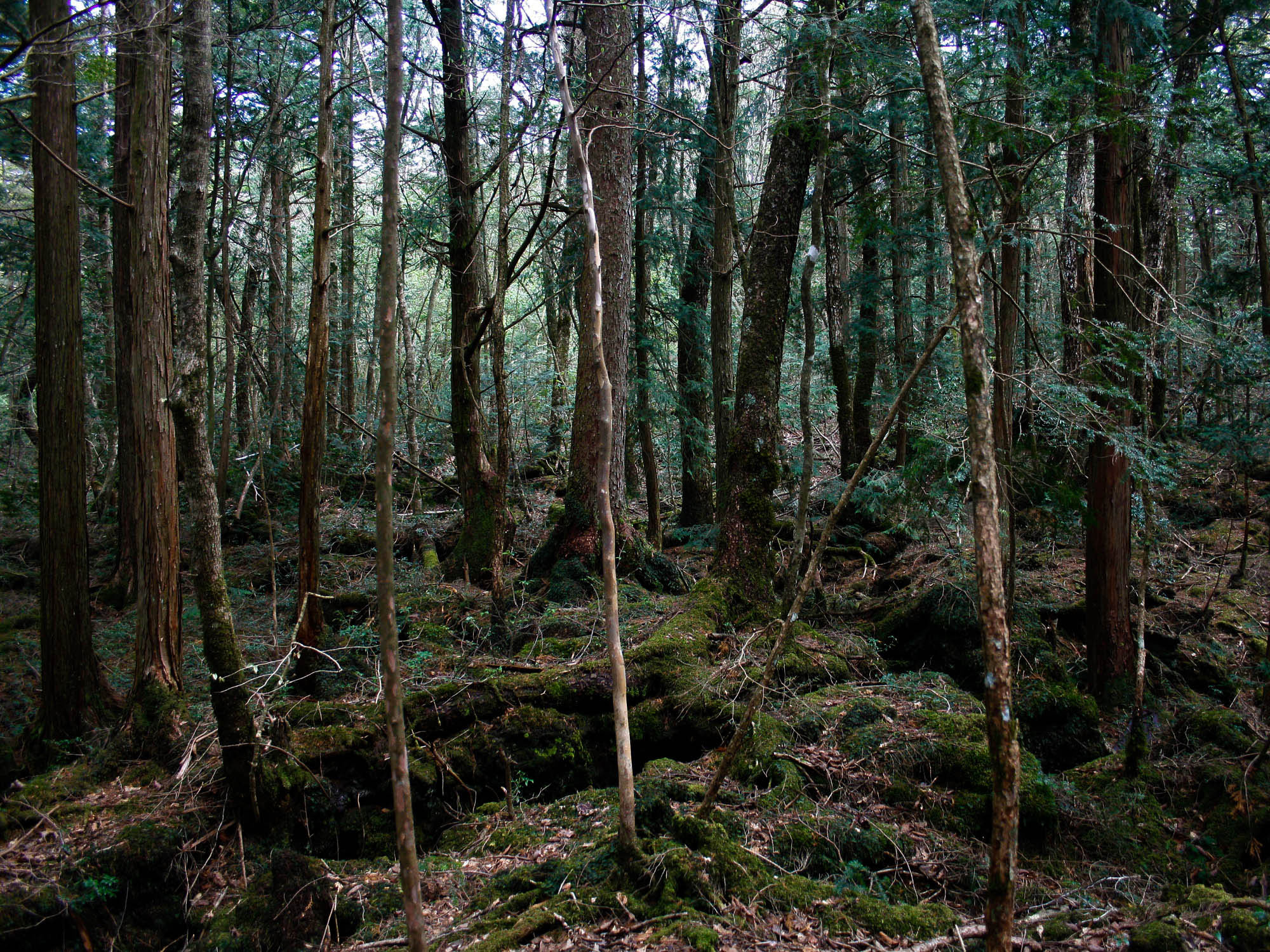 After poring over the map with a lady working at the gift shop, we decided to head to the other two caves, about a 2.5km trek if we kept to the trails. We were all set to go; I just needed to use the bathroom first.

I locked eyes with a man handing out safety hats to a group of students filing out of one of the busses. I struggled to read his half smile, half smirk.

Legend has it that the locals can always tell who is going into Aokigahara to enjoy a hike, who is going in search of the macabre and who is planning to never come out. Did he think I came to see dead bodies?

I would be lying if I said that my morbid fascination wasn’t one of the reasons I wanted to visit the forest. 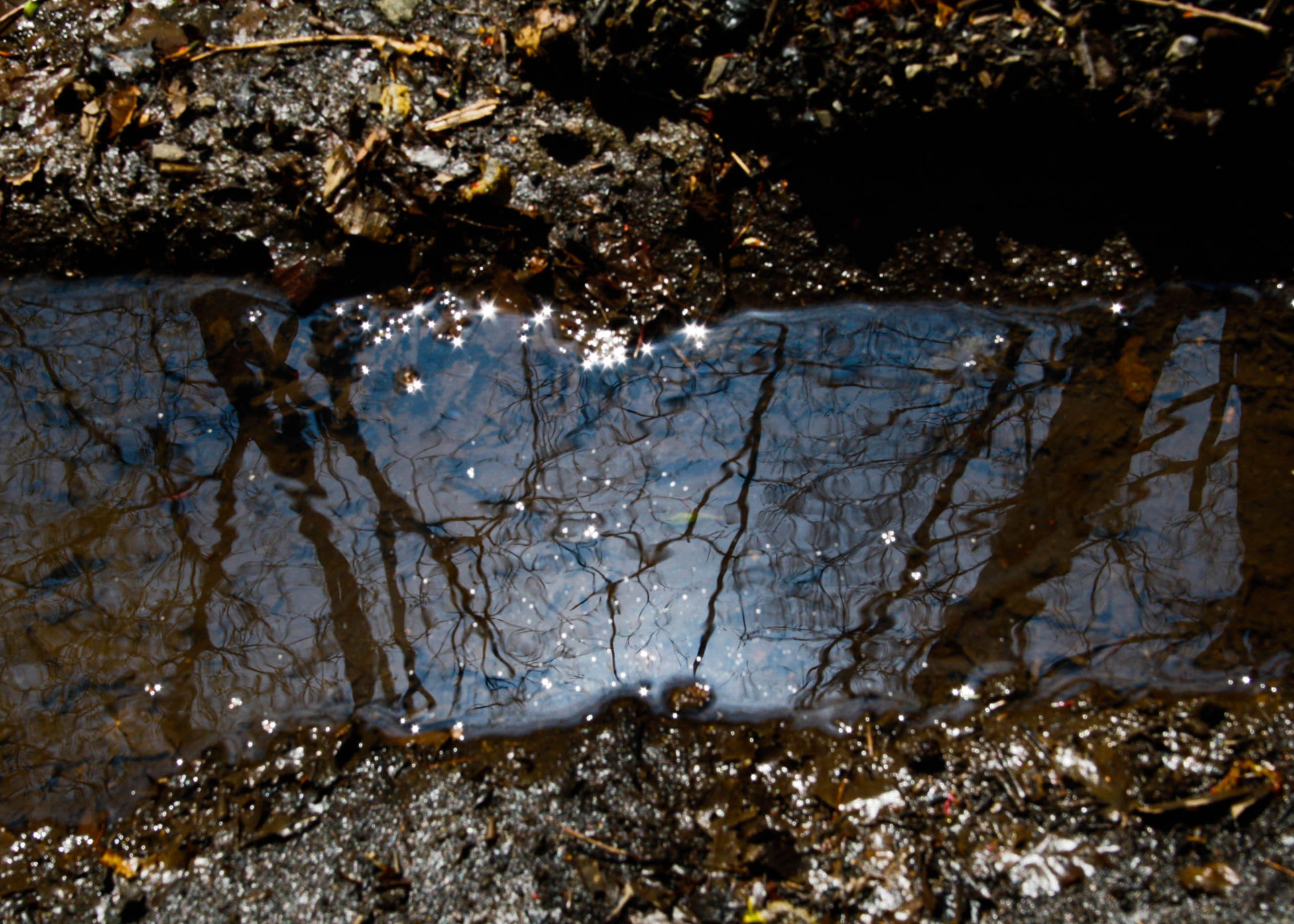 Not in the I-like-to-cut-things-up-and-watch-them-bleed way, but in the Nancy-Drew-CSI-Law & Order way. My Google deep dives don’t get much gorier than old murder cases and profiles of serial killers.

As we approached the trail that would lead us into the forest, I wondered what we would find, and if I was ready to find it.

The floor of Aokigahara is made up of volcanic rock and hardened lava from the Jōgan eruption. It’s like walking across loose floorboards.

With each step, we gave flight to leaves, twigs and small pinecones, the sound of which followed us all the way through the forest like a snake waiting to strike at our heels. 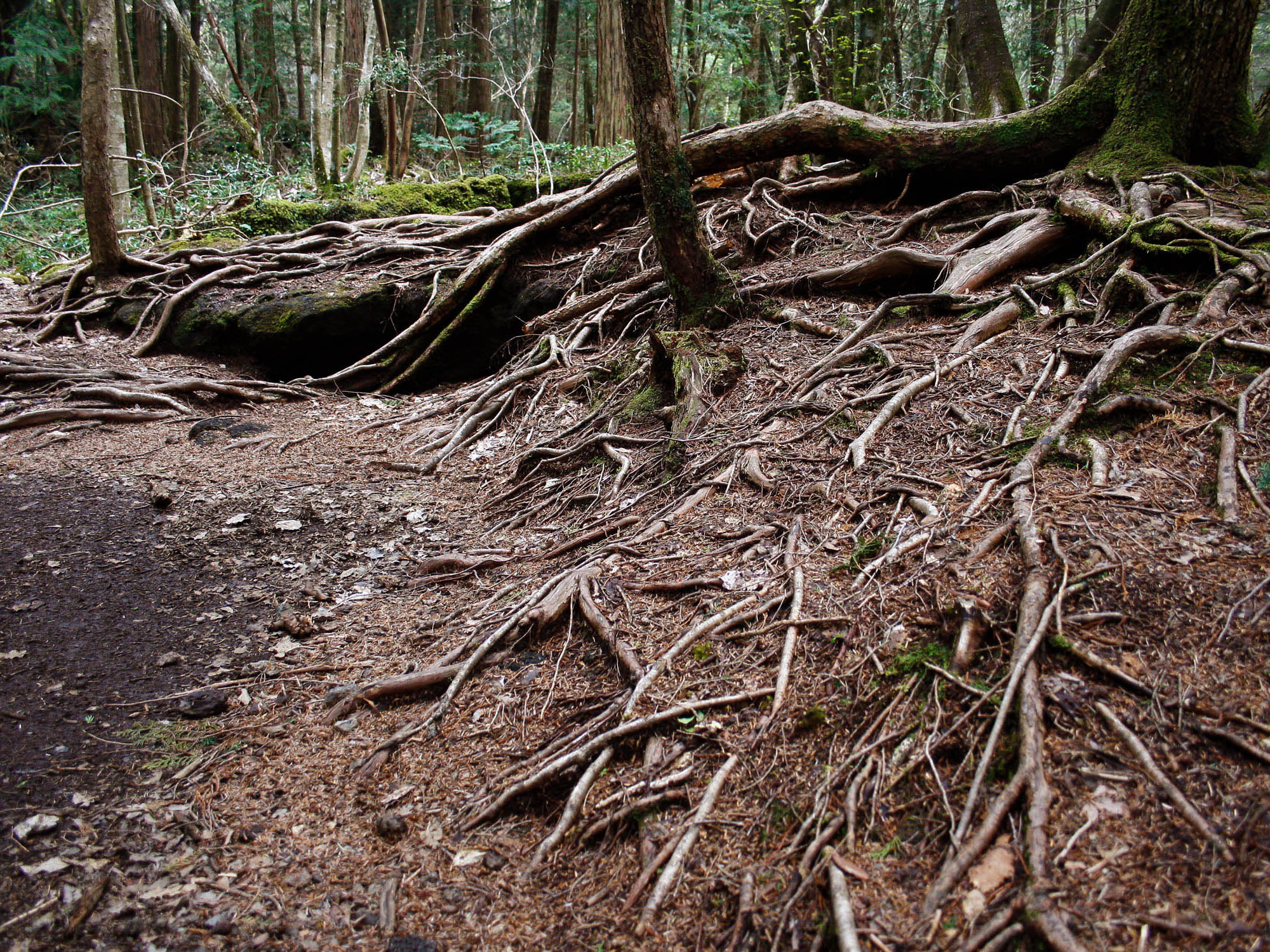 I looked up from my Converse and discovered we were at the bottom of a giant, waterless fish tank, climbing over coral turned green from algae.

John mentioned something about the map that was confusing him and I suggested we ask a group of young, male Westerners heading our way for help. But they glared at us with triumphant frowns, as if we should acknowledge the strenuous journey they had just undertaken.  I had to chew down a grin.

We passed an official tour guide waxing lyrical about a tree to two visitors and then came to a crossroads that led to some trails that weren’t shown on the map. The unofficial trails. The ones they use for body hunts.

Officials advise visitors to stick to the approved trails for a reason.  Like bridges, they transport hikers across the Sea of Trees; a tide of fallen branches, stumps, roots and caves. Should you stray, it would be an endless game of hide and seek. 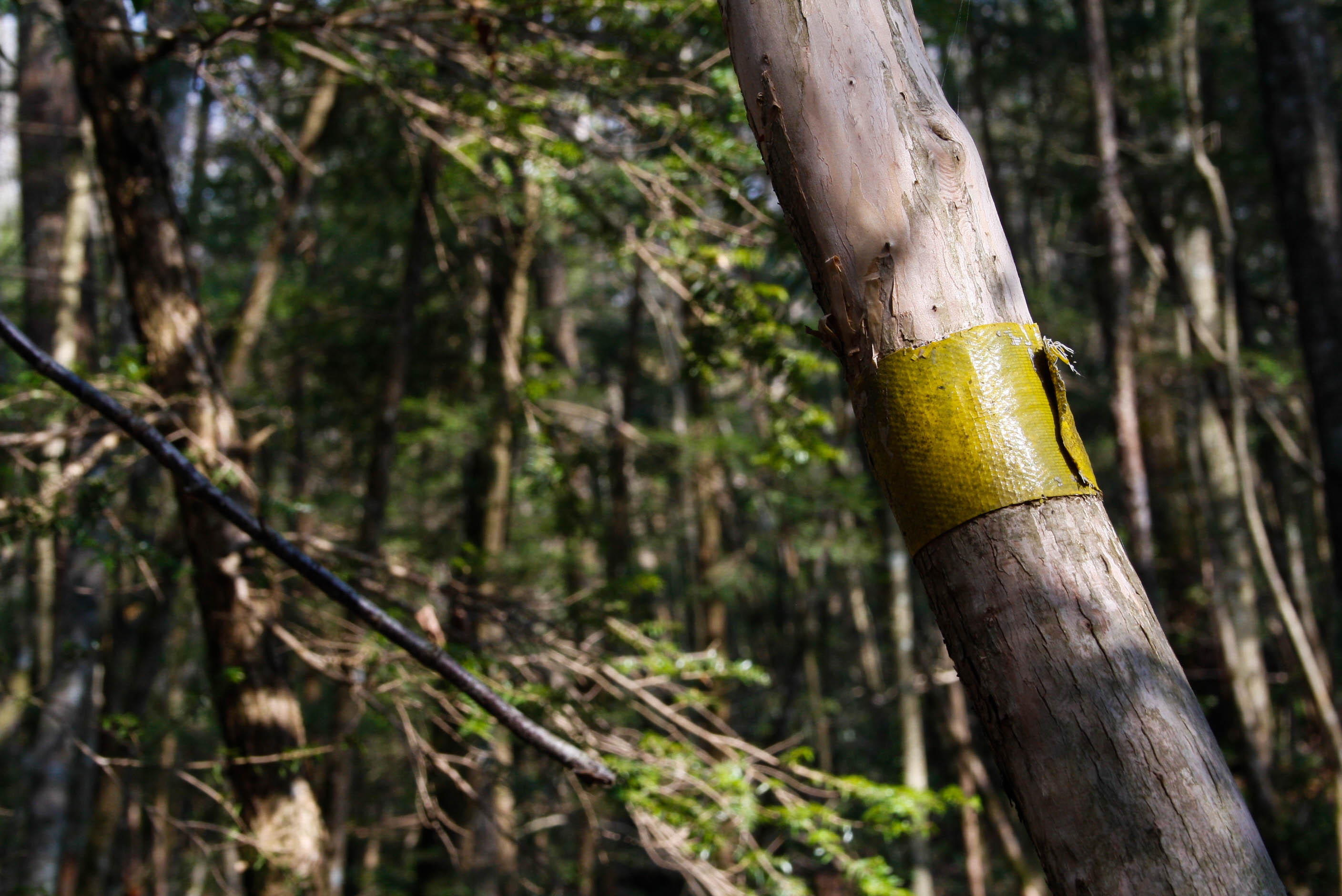 But I didn’t come all the way to Aokigahara to be safe. I suggested a path to the left and we walked it until it wasn’t a path anymore.

We began to spot the remnants of previous explorers; a glow stick hanging from a branch; red paint on a tree trunk. It’s hard to know what belongs to who; some markers are left by those who think they might change their minds about ending their lives, thus ensuring a safe path back to reality; most are left by tourists who don’t want to get lost while they conduct their own body hunts.

I questioned my motives then – had I come, like many others before me, seeking a thrill from what was someone else’s pain?

My thoughts were interrupted by a loud noise near my foot that sent me, literally, running for the trees. The forest is very quiet, which makes it very loud. 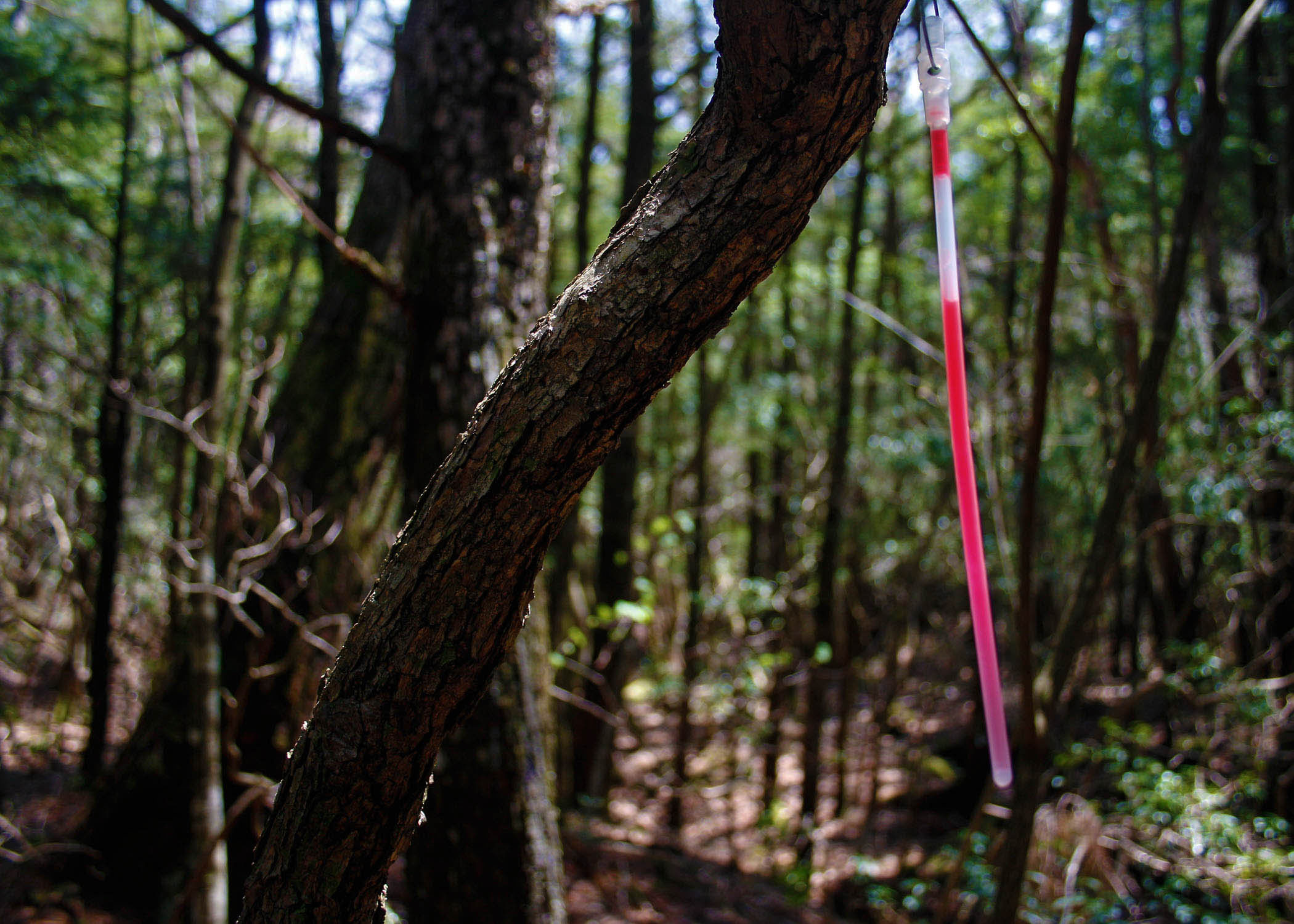 I realised later my phone had fallen out of my bag and we had to backtrack to find it. When we did, it was teeming with tiny ants. I shouldn’t have been surprised: the forest swallows anything that gets left in it, and then paints it with a fresh coat of moss.

It was John’s turn to panic when he realised he had lost the map. It seemed wise to get back on the trail then.

We passed a couple. The man looked extremely gun-ho, with his fit-for-a-week hiking gear, complete with a bear bell and a hat that would put many a boer to shame.

There are no bears in Aokigahara. But there are birds. And spiders. And creepy crawlies. So far, we had seen more life than death in the forest and I wondered if this really was the place so many people came to die.

Just then, as if to answer my question, a long, loud cry escaped from the trees. 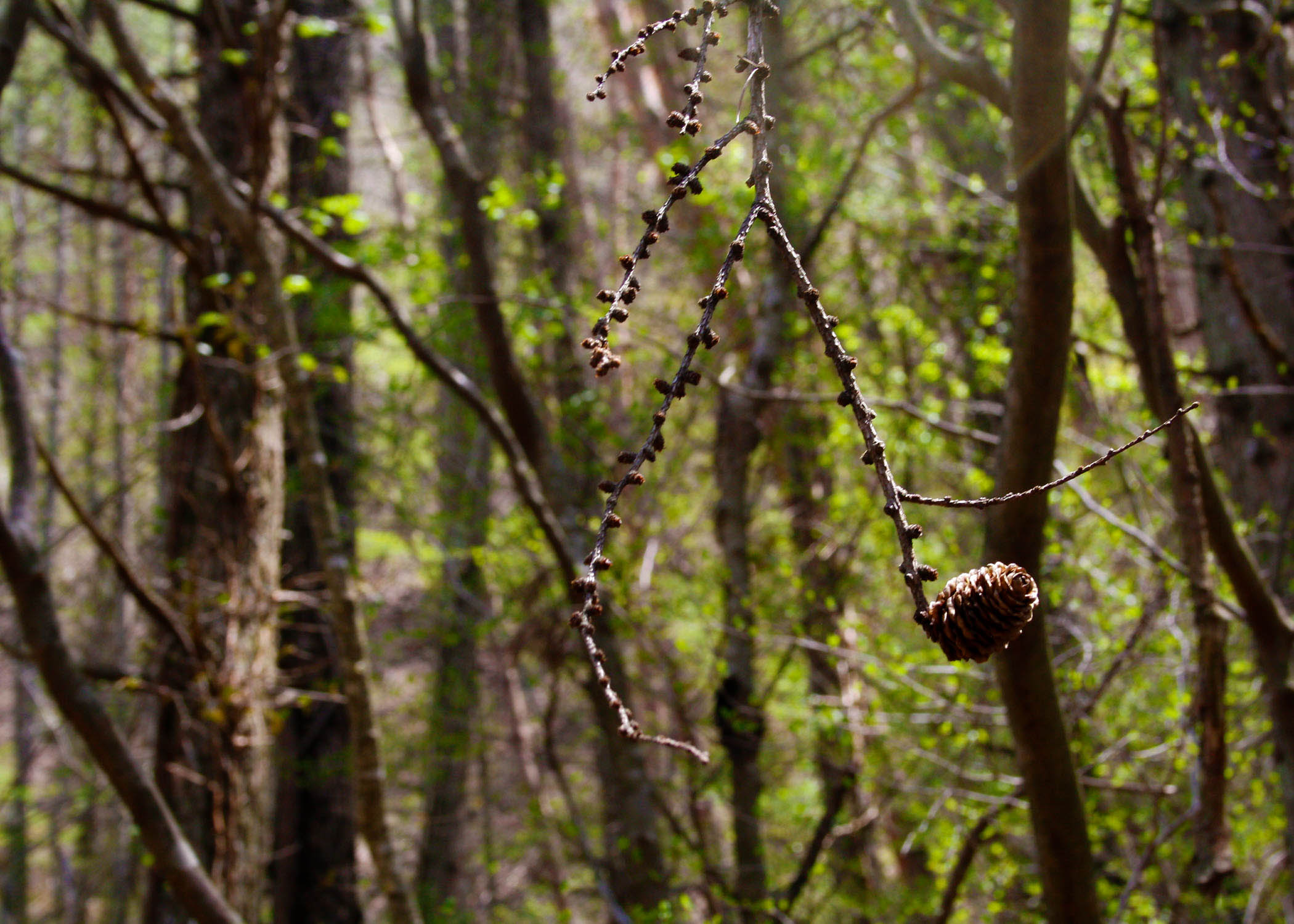 EDITOR’S NOTE: According to this, there are bears in Aokigahara. My bad.

You’re getting adventurous . You led me through that forest looking over my shoulder and keeping an eye on the odd spider. Good read – still don’t wanna go there though.

Simonereply
– In reply to: Cilla

Thanks! Part 2 is on its way – maybe it will change your mind?

Haunting… beautifully written! Love how you captured this – a really good piece of writing.

I have seen the movie ‘The Forest’ – the acting of Natalie Dormer is great. Natalie and the movie must have the Oscar in my opinion.

Simonereply
– In reply to: fighter8

Really? I thought it got pretty bad reviews. There’s another one coming out soon – Sea of Trees, with Matthew McConaughey – but so far it doesn’t look like it’ll be much better.

Nice writing.❤️.. Really liked and got lost in forest reading this even sitting in home .