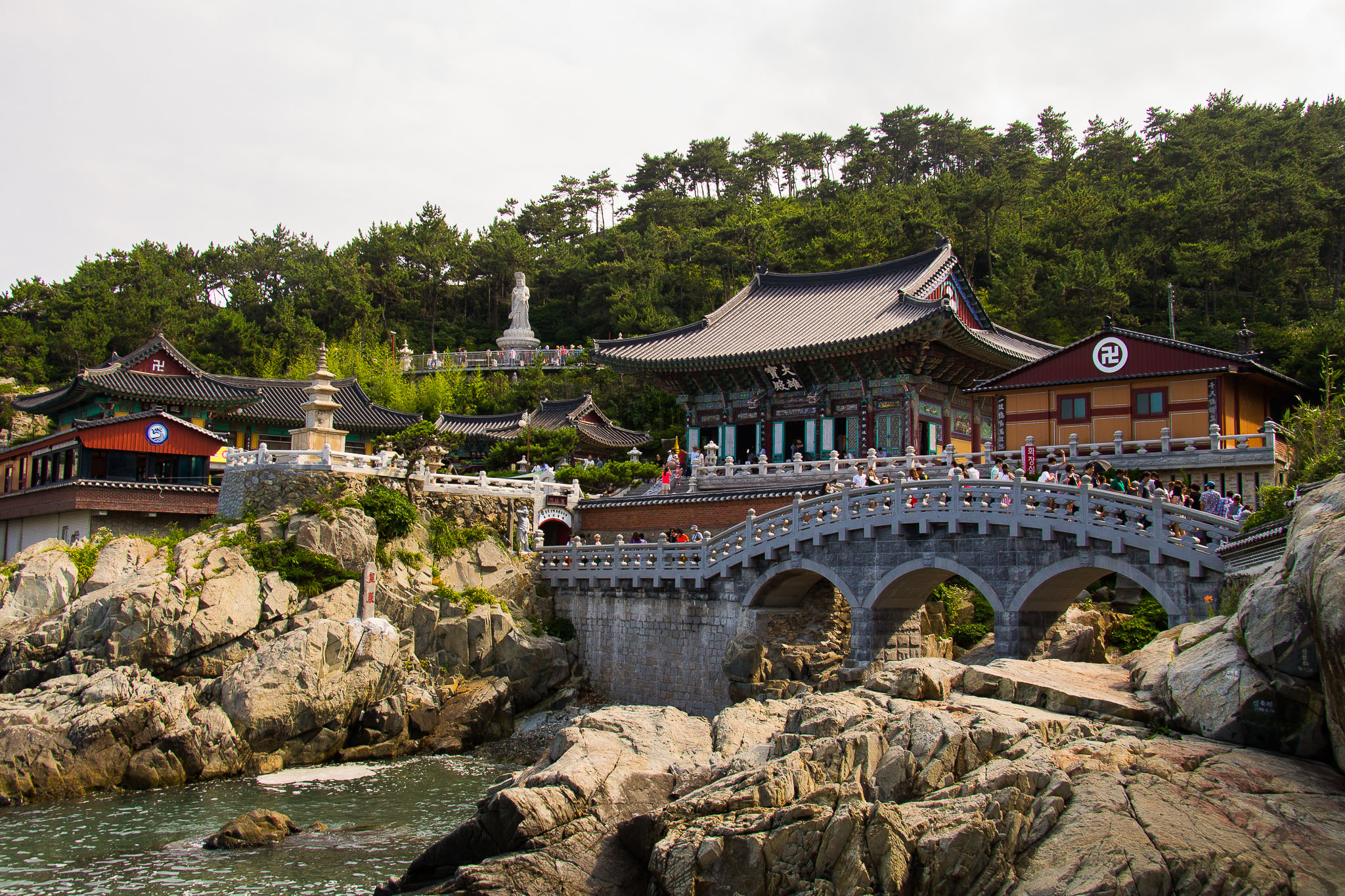 “Do you have a bathroom?” I asked breathlessly.
“Eh?” A woman and two men sat at a table in the restaurant, presumably waiting for customers to start their day.
I had rushed in when the conbini across the street turned out to not have a loo, but now realised I had no idea how to ask to use theirs in Korean.
“Bath-room,” I crossed my legs in pantomime.
“Bark-roo?” One of the men repeated questioningly.
The woman smirked and pointed to the corner of the room.
“Oh, thank you, thank you!”
I hurried in and closed the door on the sound of the man giggling.
I silently berated myself for not having learnt the simple, and obviously essential, phrase before our trip.
As relief flooded (out of) me, I looked up to find the toilet doubled as a storage space, with paper towels, cleaning supplies… and a pile of pots and pans staring back from a shelf above me.
“Hygienic,” I thought to myself.
The night before I’d been introduced to the South Korean custom of not flushing toilet paper, but leaving it to mellow in a (usually overflowing) bin instead. Also very hygienic.
No time to judge though – I yanked up my drawers, shoved my hands under the faucet and ran out of the restaurant yelling “kamsahamnida!” over my shoulder.
We couldn’t miss another bus. 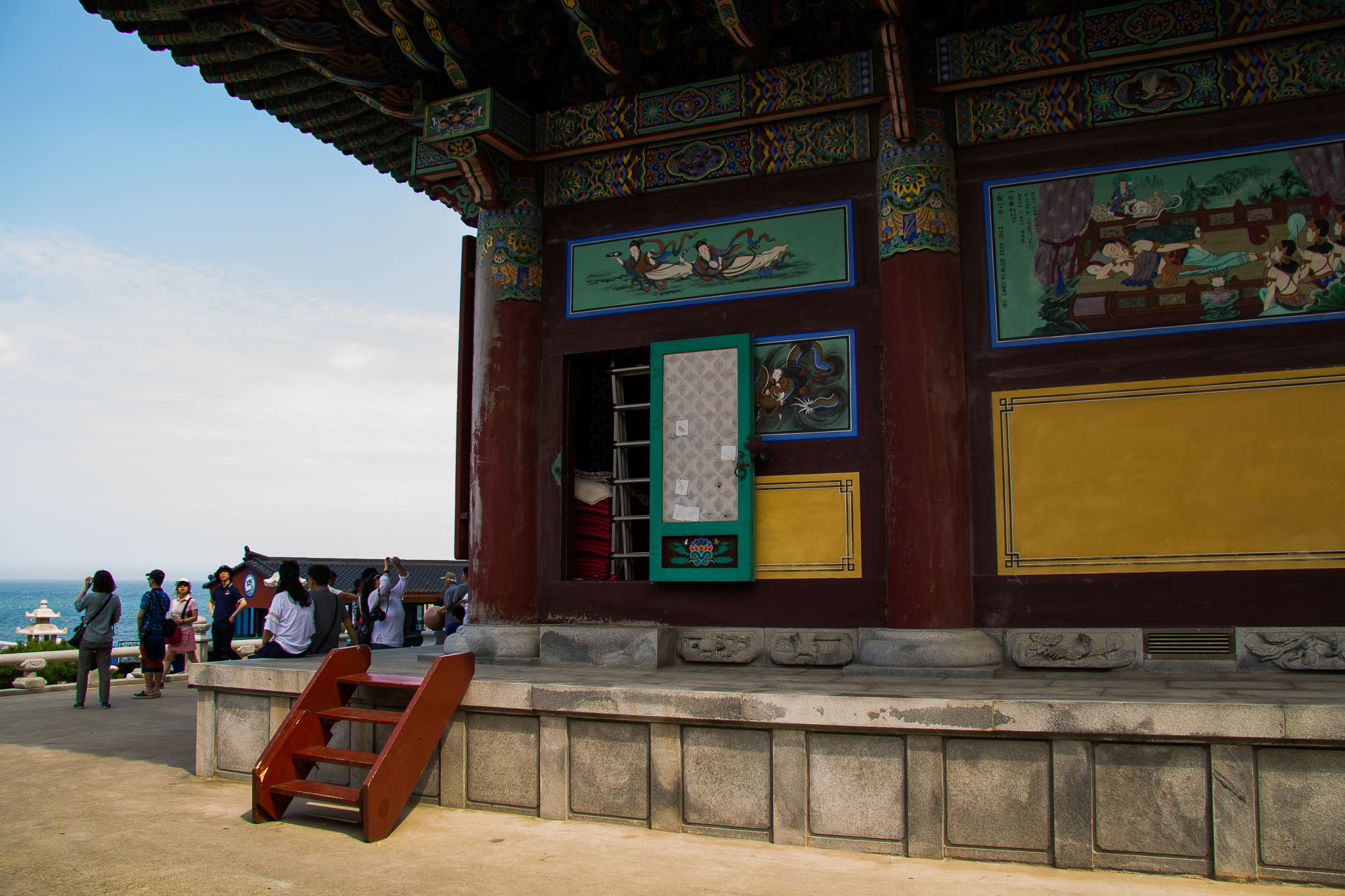 Madelyn and I had been waiting for the orange 1001 a little way down the street that would, hopefully, take us from Gwangalli Beach to Haedong Yonggungsa Temple near the Haeundae District.

We had missed the first 1001 bus to stop on our side of the street, and then decided to cross to the other side when we saw the same 1001 bus stopping there. But by the time we reached that side and its second 1001 bus had stopped, we realized it was going in the wrong direction and we were right to be on the side where we had been waiting all along.

We were back waiting on the right side of the street for the fourth 1001 bus when the lemonade and coffee I chugged at breakfast had caught up with me. 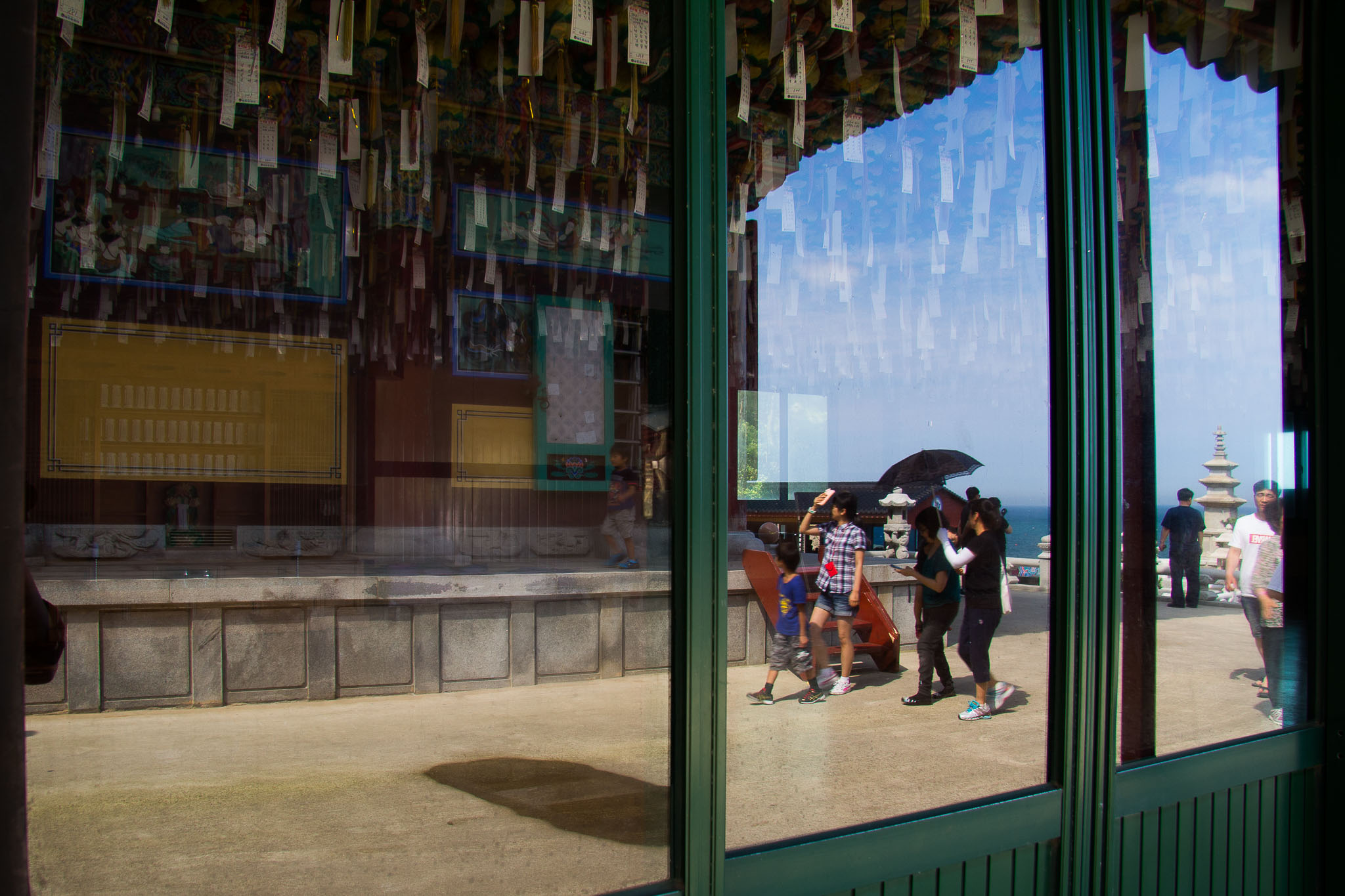 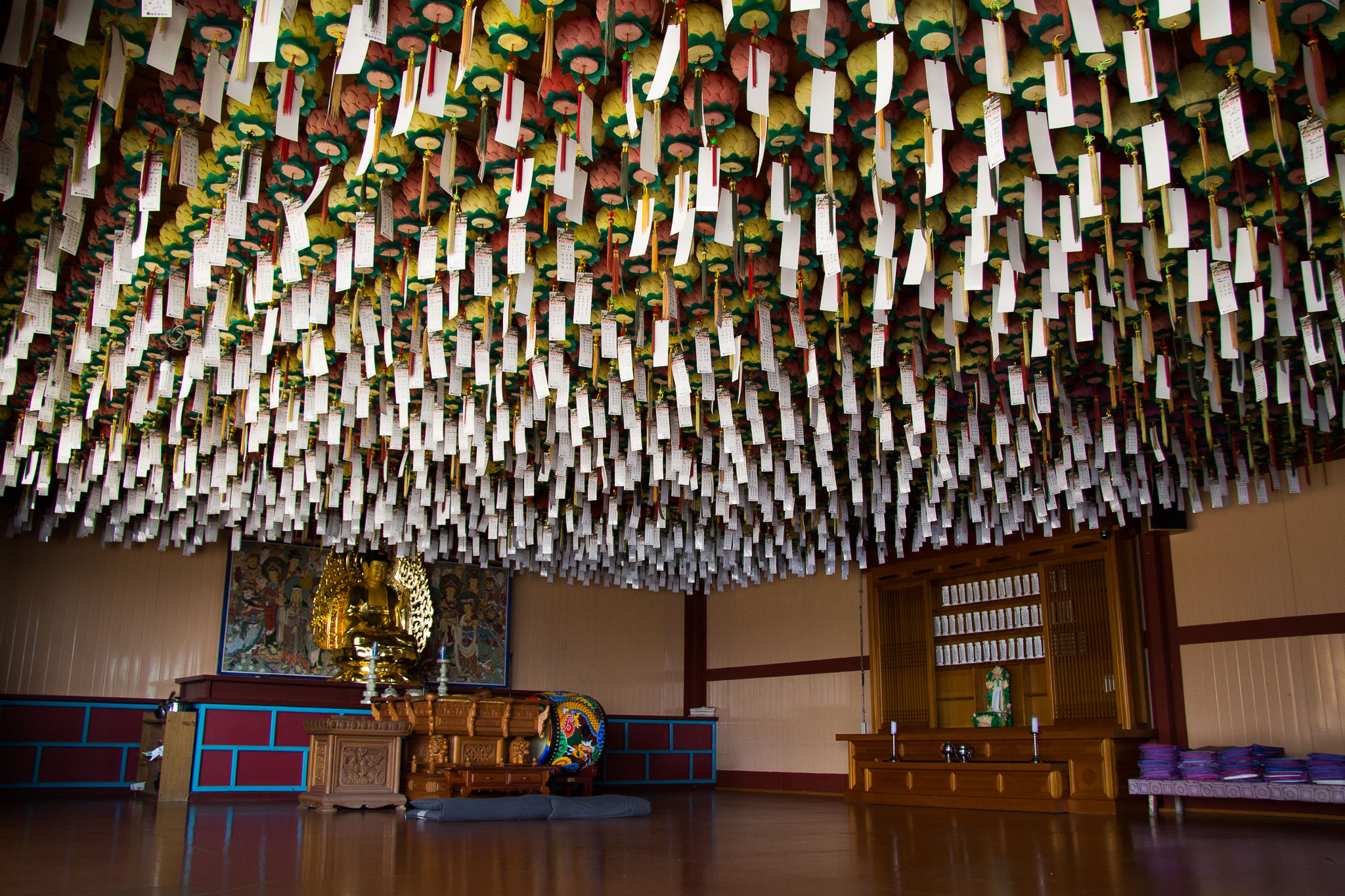 After 14 stops on the orange 1001, we’d have to change to a blue 100 bus. I said I’d count the stops while Madelyn cross-checked the Hangul on Google maps with the LCD characters above the driver’s head, but I lost track eventually and the names on the screen weren’t matching up to Madelyn’s phone anymore.

After about an hour, the driver pulled into a bus yard and ordered everyone to get off; it was the last stop on his route.

And so we did. After precisely 7 stops we saw a giant sign on the other side of the road: Haedong Yonggungsa Temple. 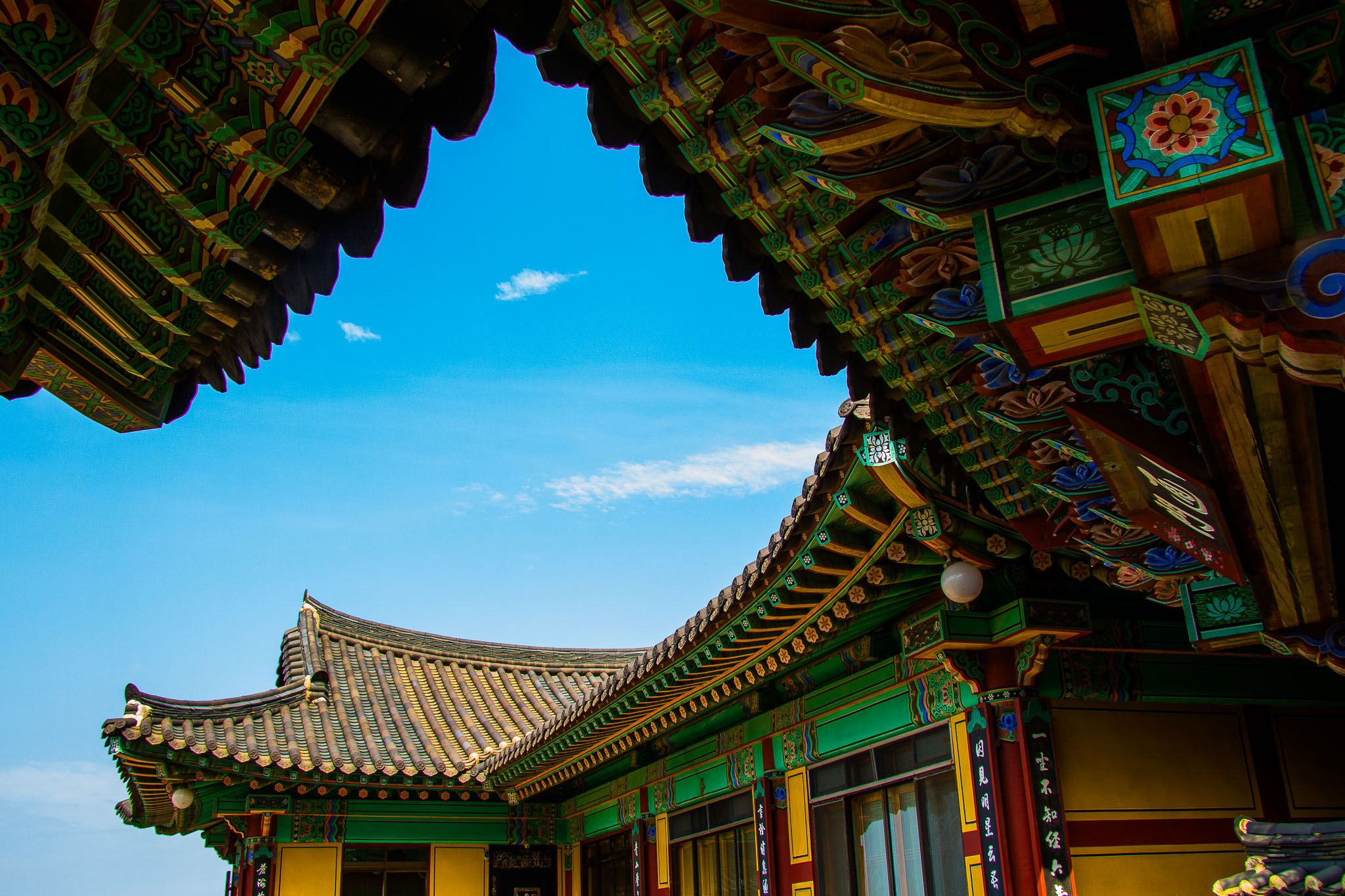 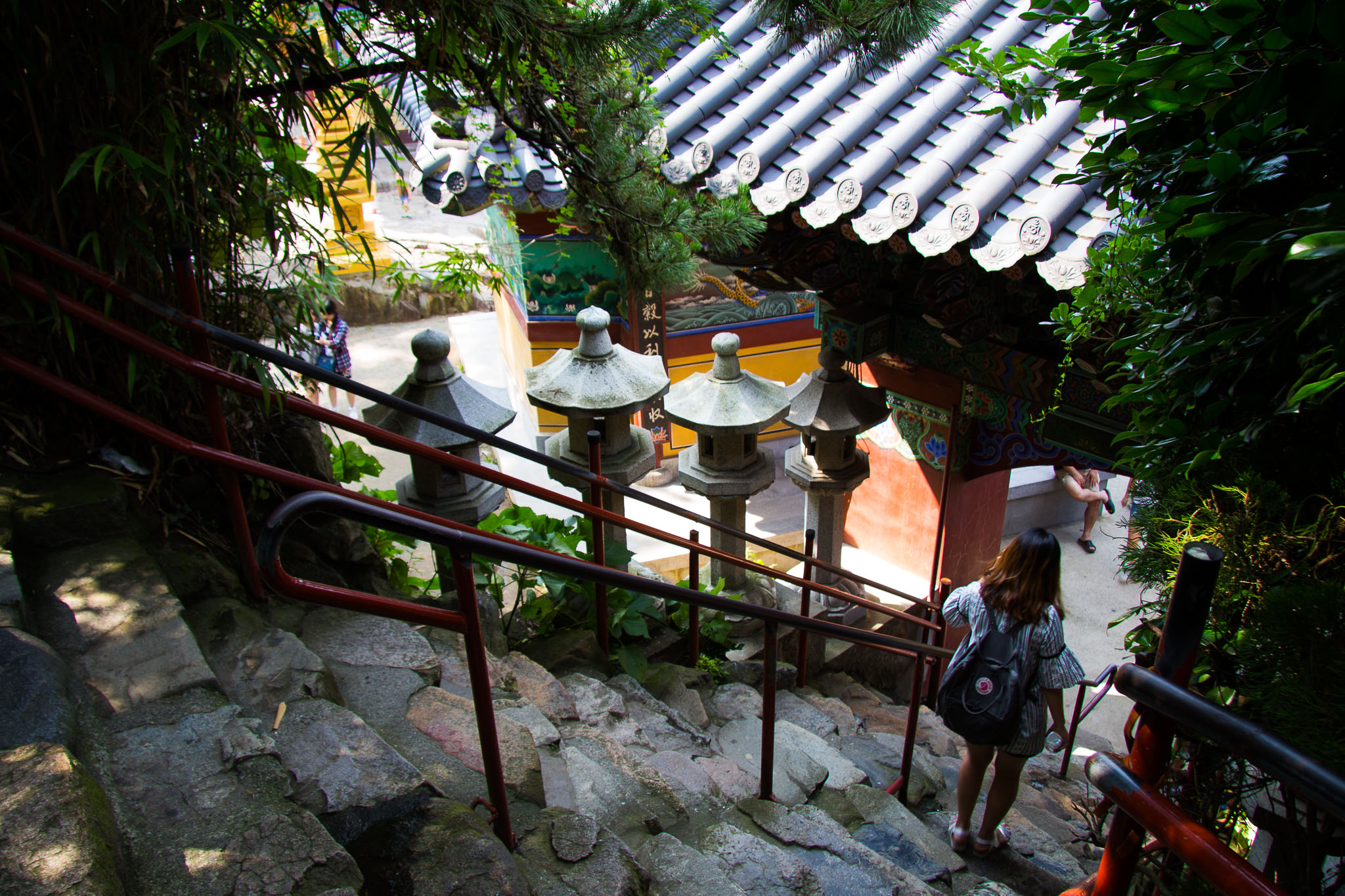 Haedong Yonggungsa Temple is situated on the coast of the north-east region of Busan. To get there, visitors have to walk up a small hill and down a long flight of stairs.

I hurried us through a row of souvenir shops and past the temple’s 12 zodiac stone figures, down the 108 Steps and across the Half Moon Bridge. Next to the main hall, I spotted a sign for the ladies room and made a beeline for one of the stalls. Instantly, I wished I hadn’t. 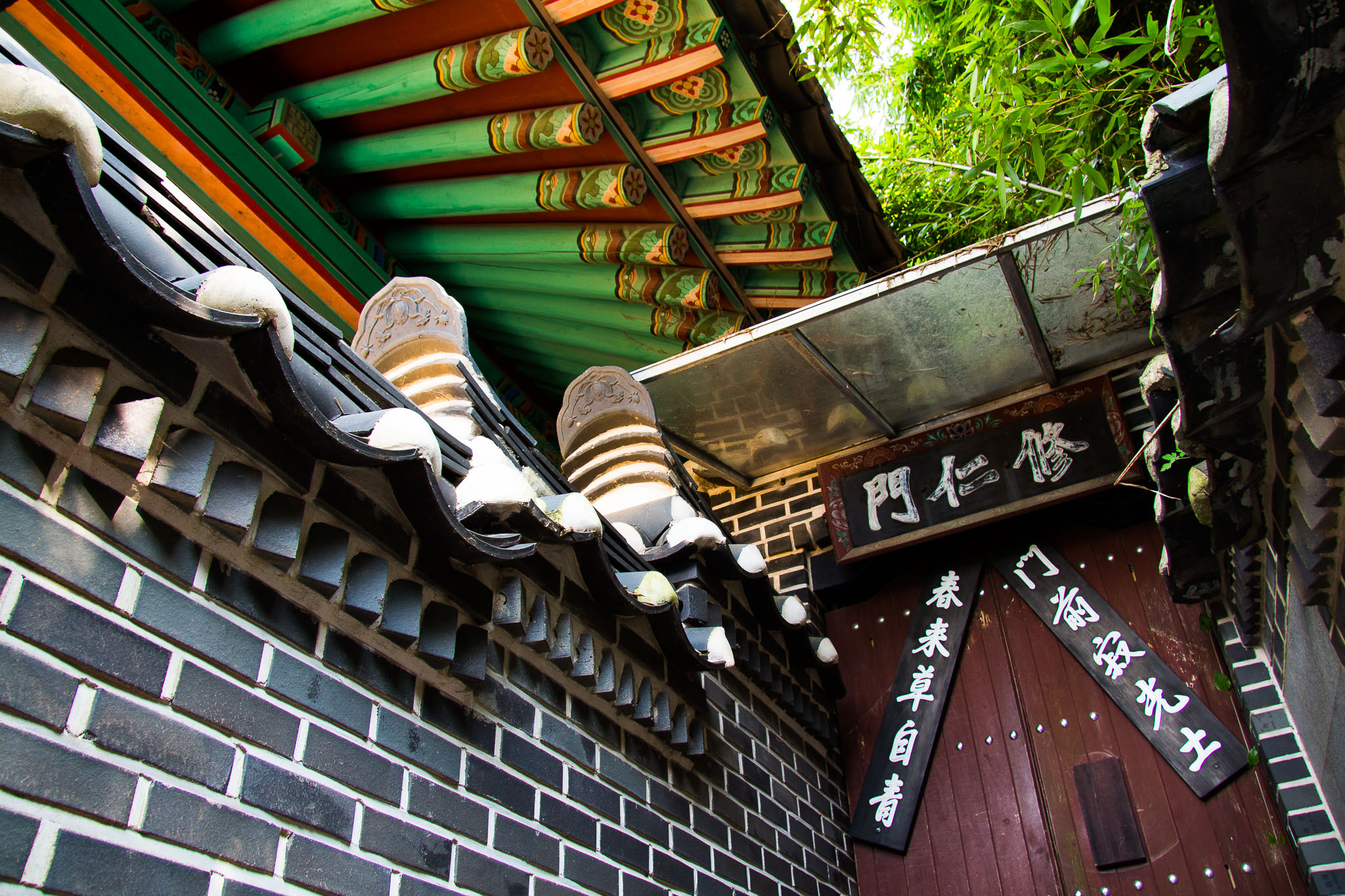 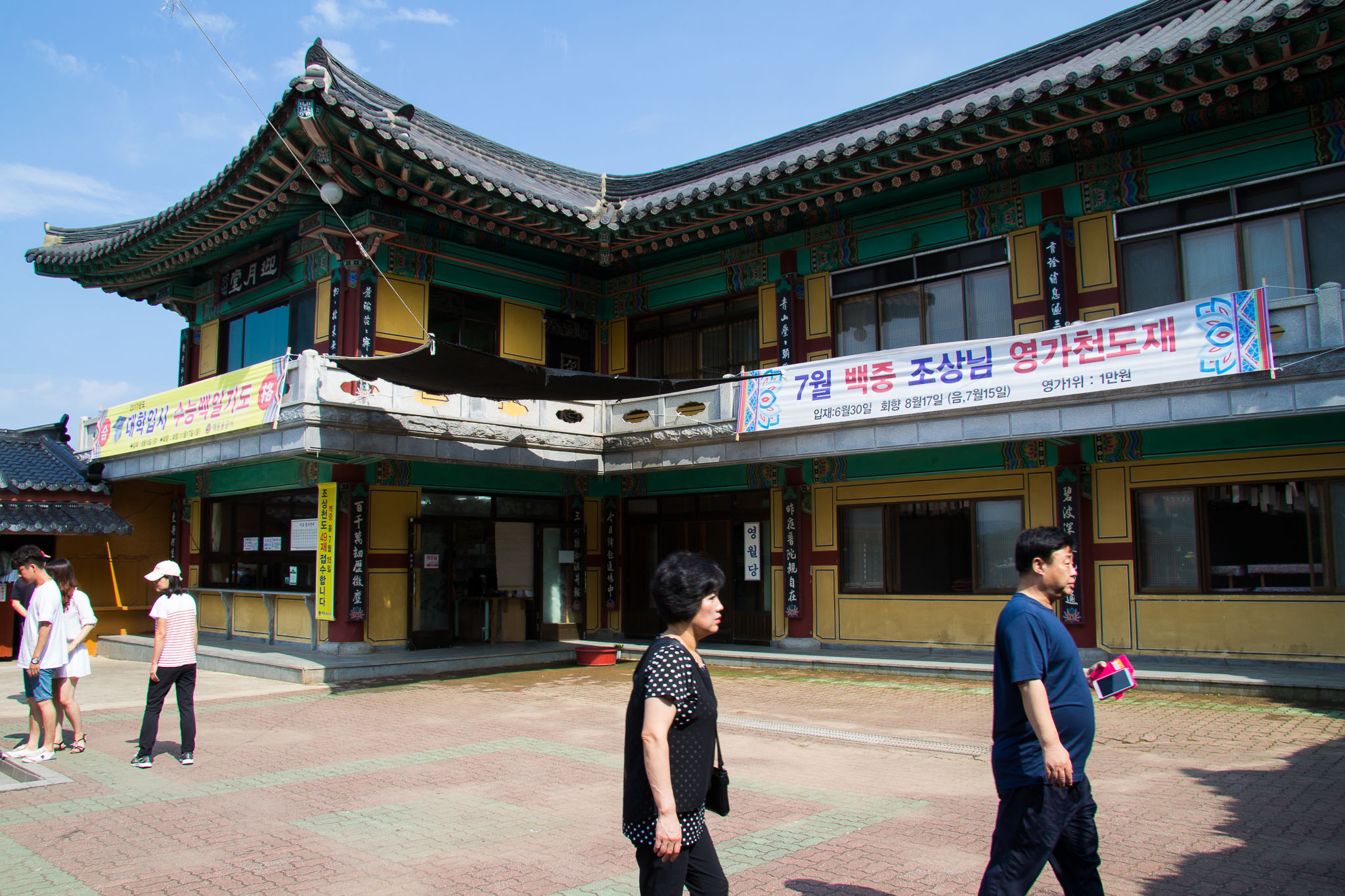 As I squatted over the hole in the ground, I looked down and realised I was staring at several deposits made by the stall’s previous visitor on the stone floor below. I tried not to gag as a small breeze carried the stench of disinfectant up to my nose.

For the first time since we’d arrived in Korea, I really missed Japan.

The view made up for it though. The cliff-side temple is a rare attraction in Busan; most in South Korea are located in the mountains.

Haedong Yonggungsa is considered one of three sacred places of the Great Goddess Buddha of Mercry, or Guan Yin, who is believed to live in the sea and often depicted riding atop a dragon. 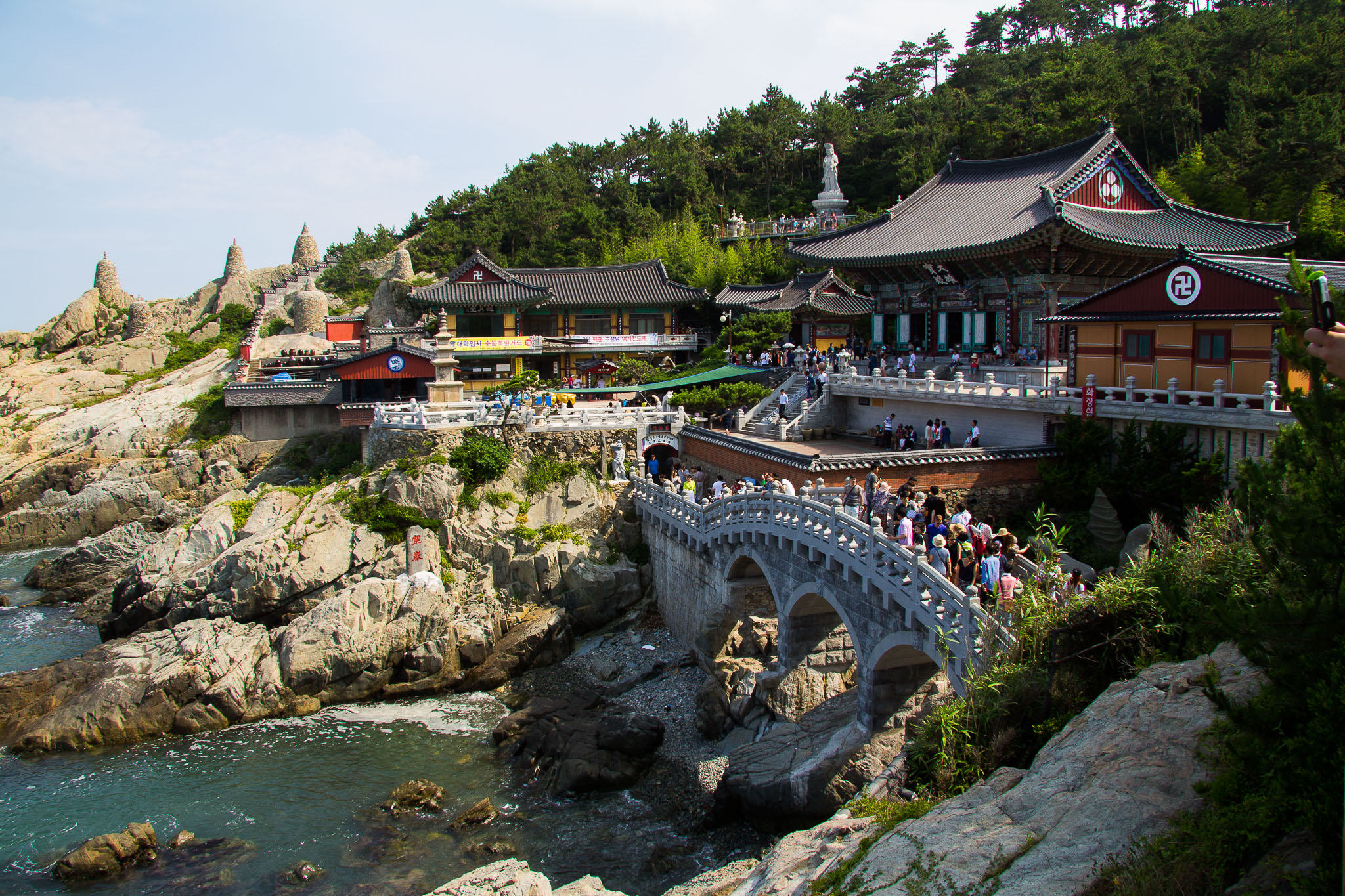 The temple was built in 1376 by a monk named Naong who was an advisory to King Gongmin during the Goryeo Dynasty.

Naong was practising asceticism at Bunhwangsa Temple in Gyeongju when a deadly drought spread across the kingdom. Desolate crops led to famine, and everyone implored Guan Yin to send rain.

The East Sea Dragon came to Naong in a dream and told him that if a temple was built on Bunhwang Mountain and the people of the kingdom prayed there, they would once again live in a time of peace.

Naong chose to build the temple on the side of the mountain facing the sea, where people could pray in the morning and then get their answer from the sea dragon in the evening. 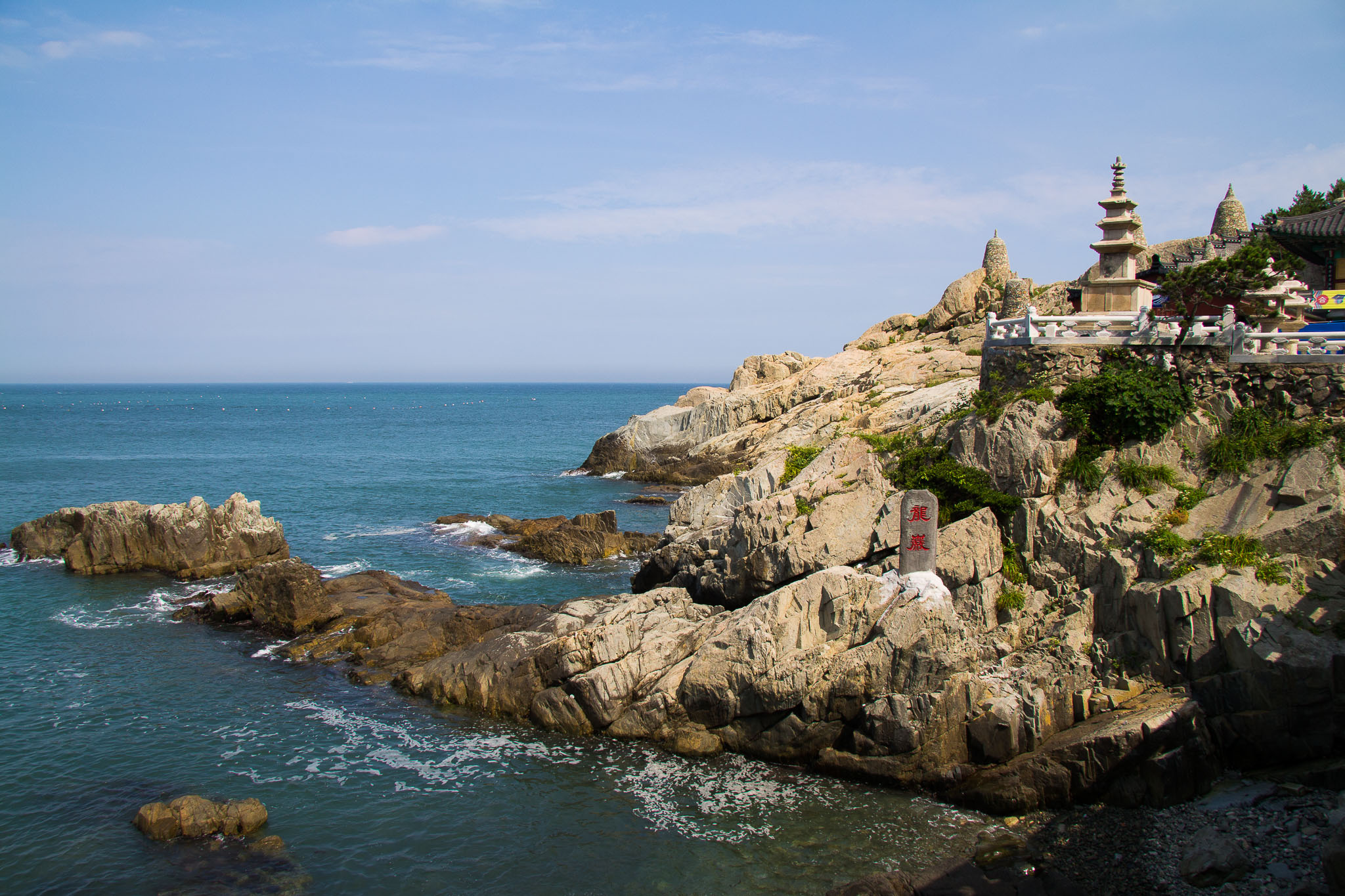 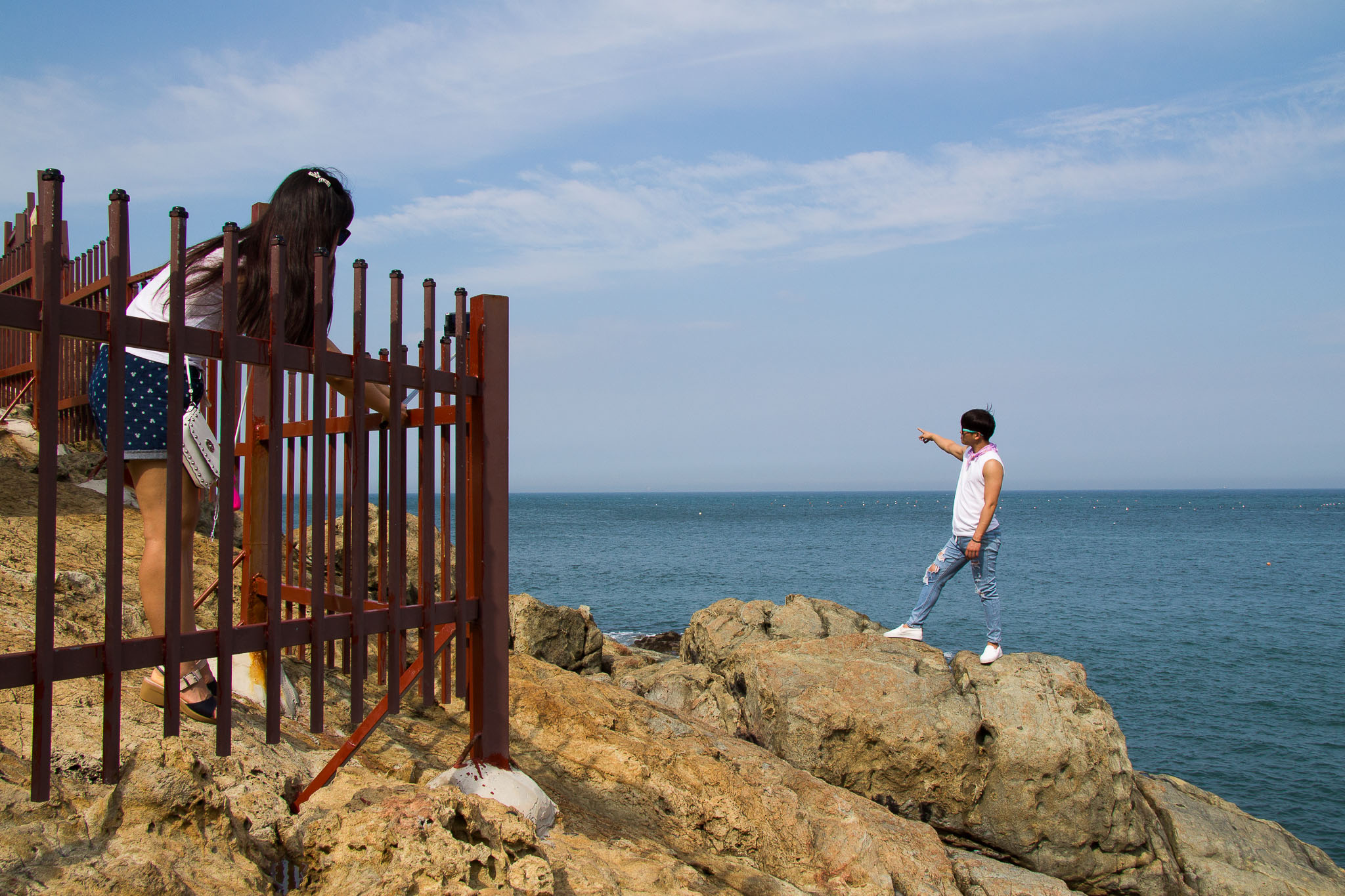 In 1592, the temple was destroyed by fire during war with Japan. Three hundred years after it burned down, the monk Wunkang of Tongdosa Temple began its reconstruction.

In his own dream, Wunkang saw a clear image of the white-robed Guan Yin riding the back of the East Sea Dragon. He renamed the temple Haedong Yonggungsa, or the “dragon palace”.

Today, it is believed that if you pray with all of your heart at Haedong Yonggungsa, at least one of your wishes will come true.

Mine manifested in the parking lot of the Fisheries Science Museum that sits next to the temple as we made our way back down to the bus stop: a block of Western toilets.

The Goddess of Mercy lives on. 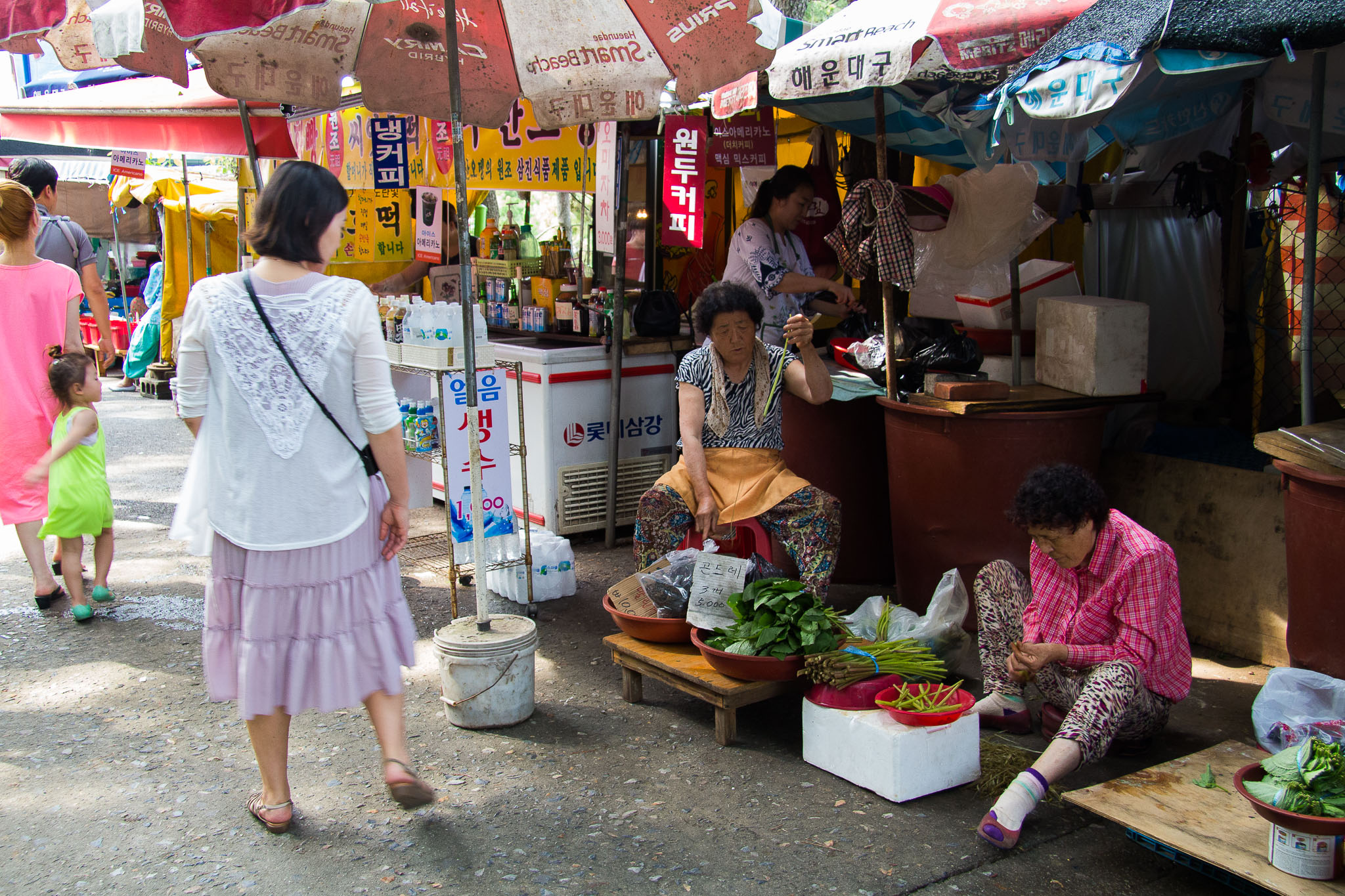 Admission to the temple is free.

Simonereply
– In reply to: Vidy Hiremath

Thanks! You’ll have an awesome time, no doubt.