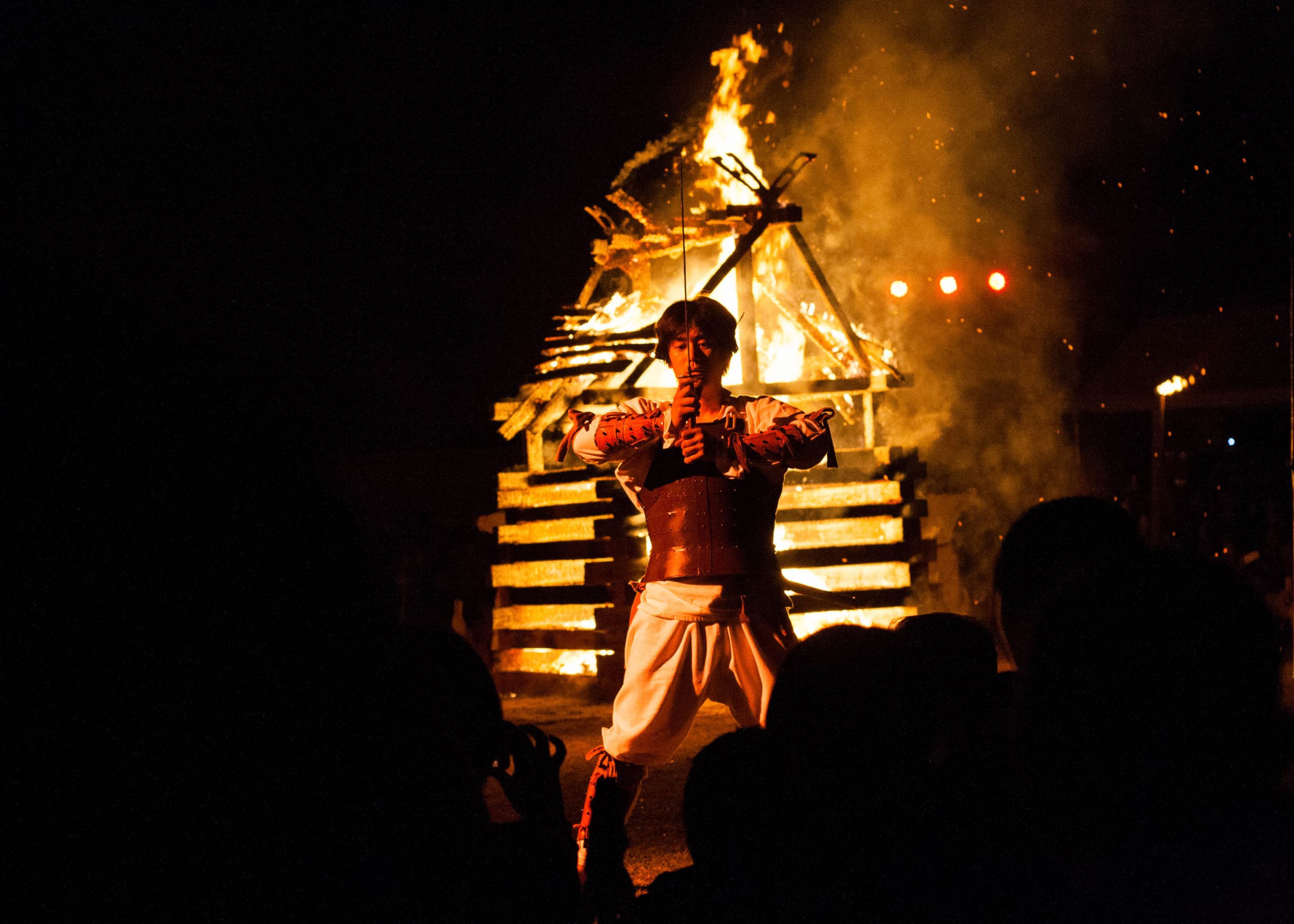 My former roommate and longtime bro, Matthew, decided to come to Miyazaki for a week during a month-long visit to Japan. Since Culture Day fell on Monday the 3rd, and I had a day of daikyu on the 4th, we were able to spend 4 days exploring together.

On the Saturday, I took him off to Saito to experience his first Japanese festival. Two fellow JETs were participating in the Saitobaru Kofun Matsuri – an annual fire festival that includes a torch parade from the Tsuma Shrine through the Saitobaru Burial Mounds, and a big bonfire.

The Mounds are a cluster of over 300 tumuli, or kofun, that date back to a period between the 3rd and 7th centuries. Each tumulus has a mound, or funkyu, that contains a stone chamber and a coffin for burying the dead.

The cluster in Saito is one of the largest in Japan and was designated as a special historical site by the Japanese government in the 50s.

The plateau upon which the tumuli were constructed stretches for about 2 km (1.24 mi). Depending on the time of year, it is covered in the flowers of the season. Now, it is cosmos. 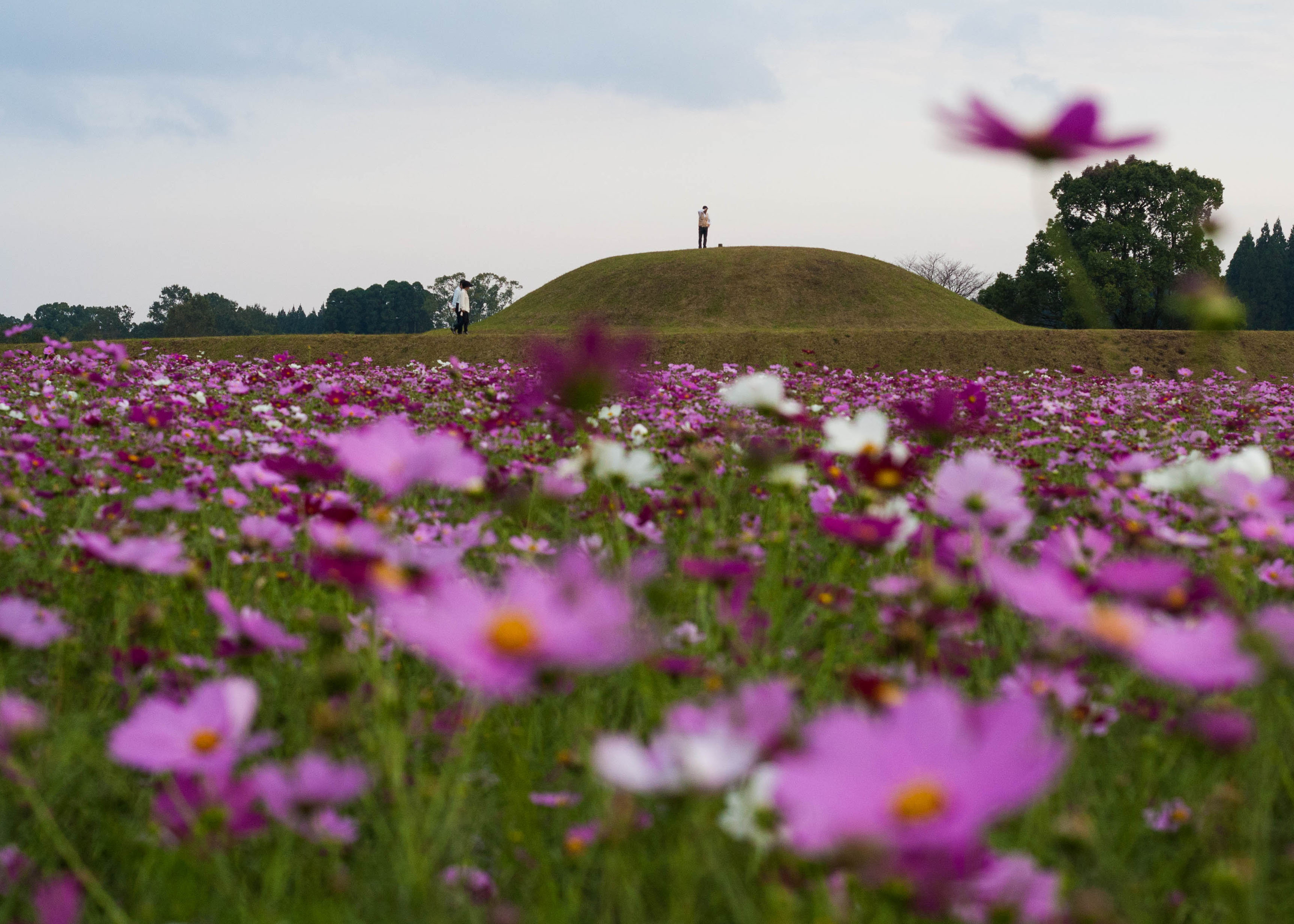 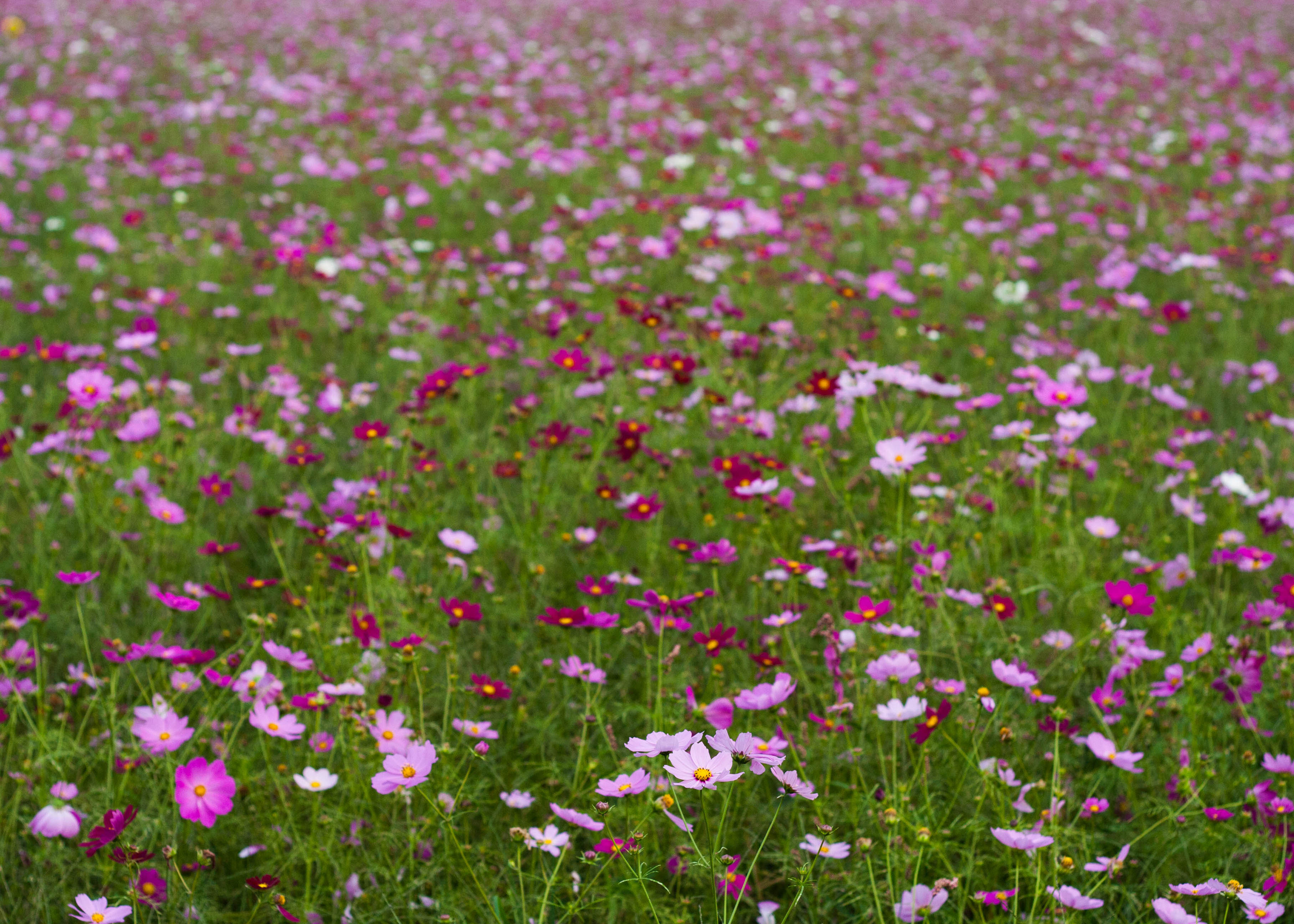 Since we had arrived at around 16:30, and the main event was only due to start at 19:30, we took the opportunity to explore the cosmos fields and the tumuli. In the last few hours of daylight, it was quite a sight to behold. The beauty of this country never ceases to amaze me.

One tumulus in particular – a large, two-tiered circular mound – was about 7 m high and I discovered later that it is the only one of its kind in Japan.

Oni-no-iwaya is believed to have been the tomb of the last local chief, or shucho, of Saito which puts  its date of construction somewhere in the 7th century.

It was excavated in the 90s and so its now possible to see inside the lateral-entry stone chamber, the only one at the Saitobaru Burial Mounds. It is divided into a genshitsu,  where the dead were laid, and a sendo, a passageway leading to the genshitsu.

Once upon a time, the mound was encircled with water.

As it got dark, we went in search of food. While munching on takoyaki (balls of batter filled with diced octopus) and yakitori (skewered chicken), we walked around and got a lay of the land.

Then, it was time for the main event to begin. A colleague and one of our students had saved us seats on the bleacher-type stands that had been set up for festival-goers. This faced a circular arena, at the centre of which stood the giant house of wood that was to be lit.

After the torch parade reached the arena, the bonfire was set on fire and the dance performance began. The dance, in its entirety, tells the love story between Ninigi-no-Mikoto, the grandson of the sun goddess Amaterasu, and Konohana-sakuya Hime, the daughter of the mountain god Ohoyamatsumi. 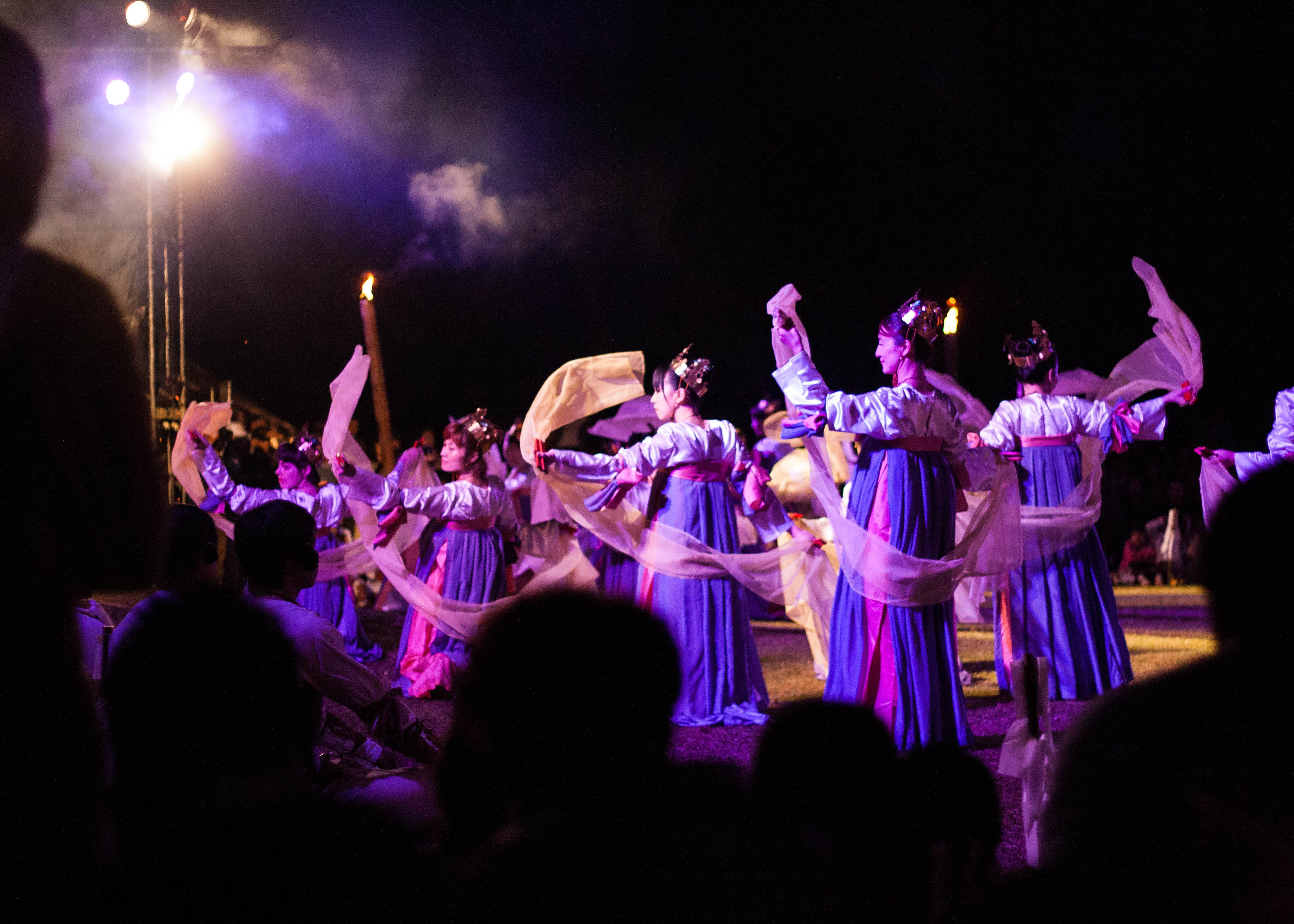 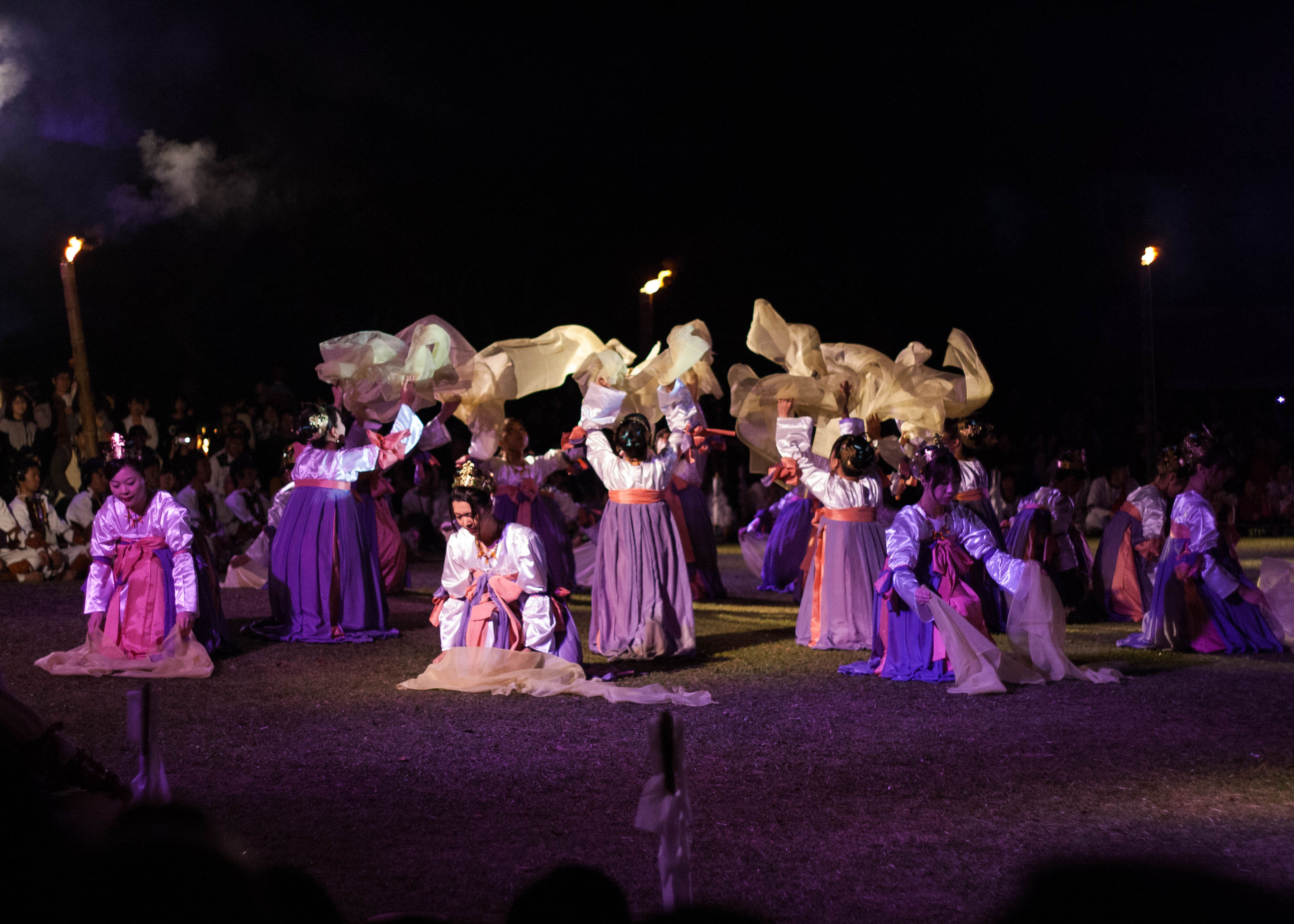 Konohana-sakuya, the blossom princess, and Ninigi, the god of rice,  met on the the beach of Cape Kasasa and fell in love. But after they were married, Konohana became pregnant in just one night and Ninigi accused her of cavorting with an earthly kami. Konohana was furious and locked herself in a doorless hut and set it on fire, claiming the fire would not hurt her or their unborn child if she had indeed remained faithful.  Konohana had three sons in the hut – Honosusori, Hikohohodemi and Hoakari – and emerged unscathed.

Afterwards, we joined in one last dance around the fire and I got to see one of my students rock out on the taiko drums (seriously – he was amazing!). And then, very fittingly, a set of fireworks went off to end the night. 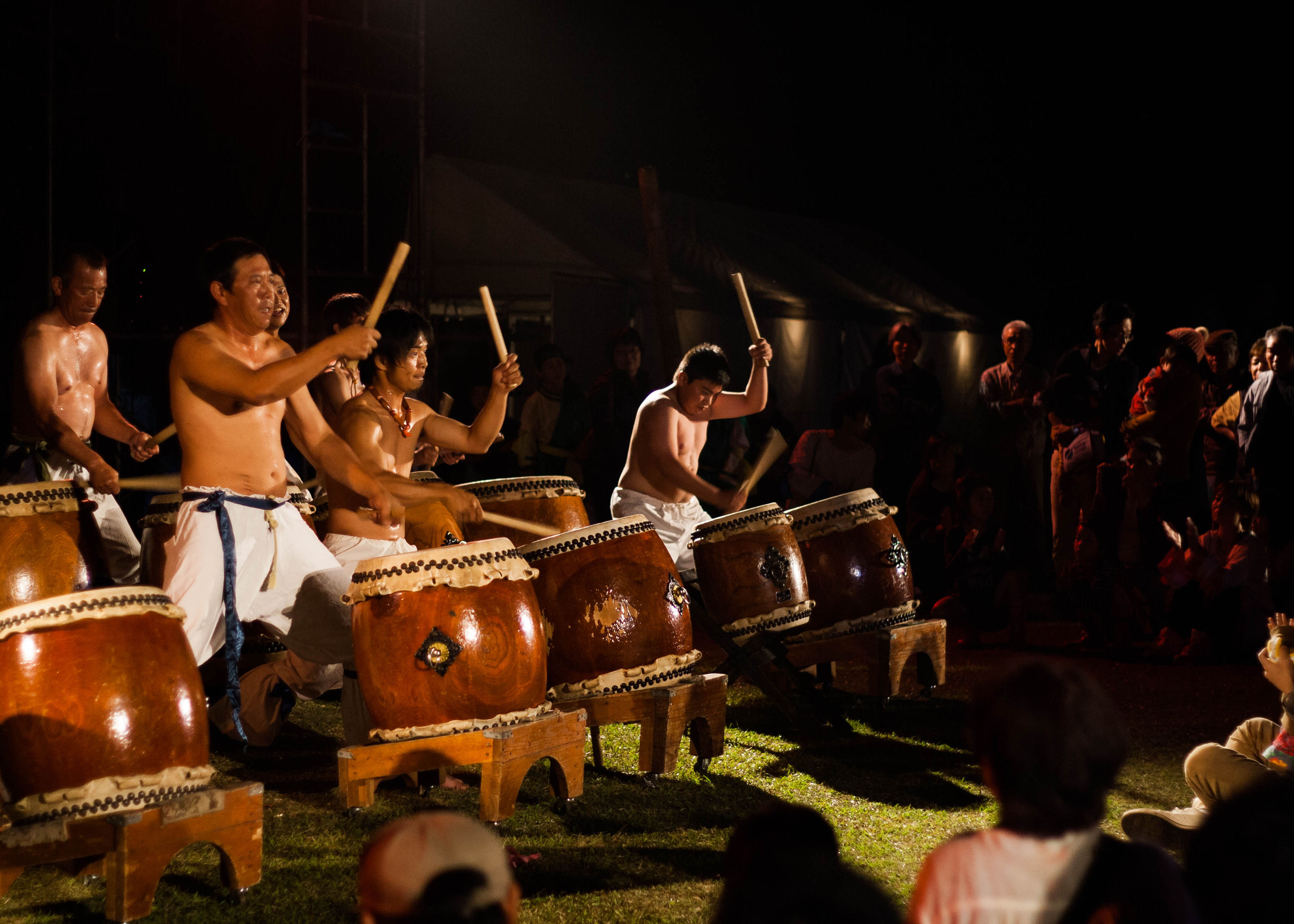