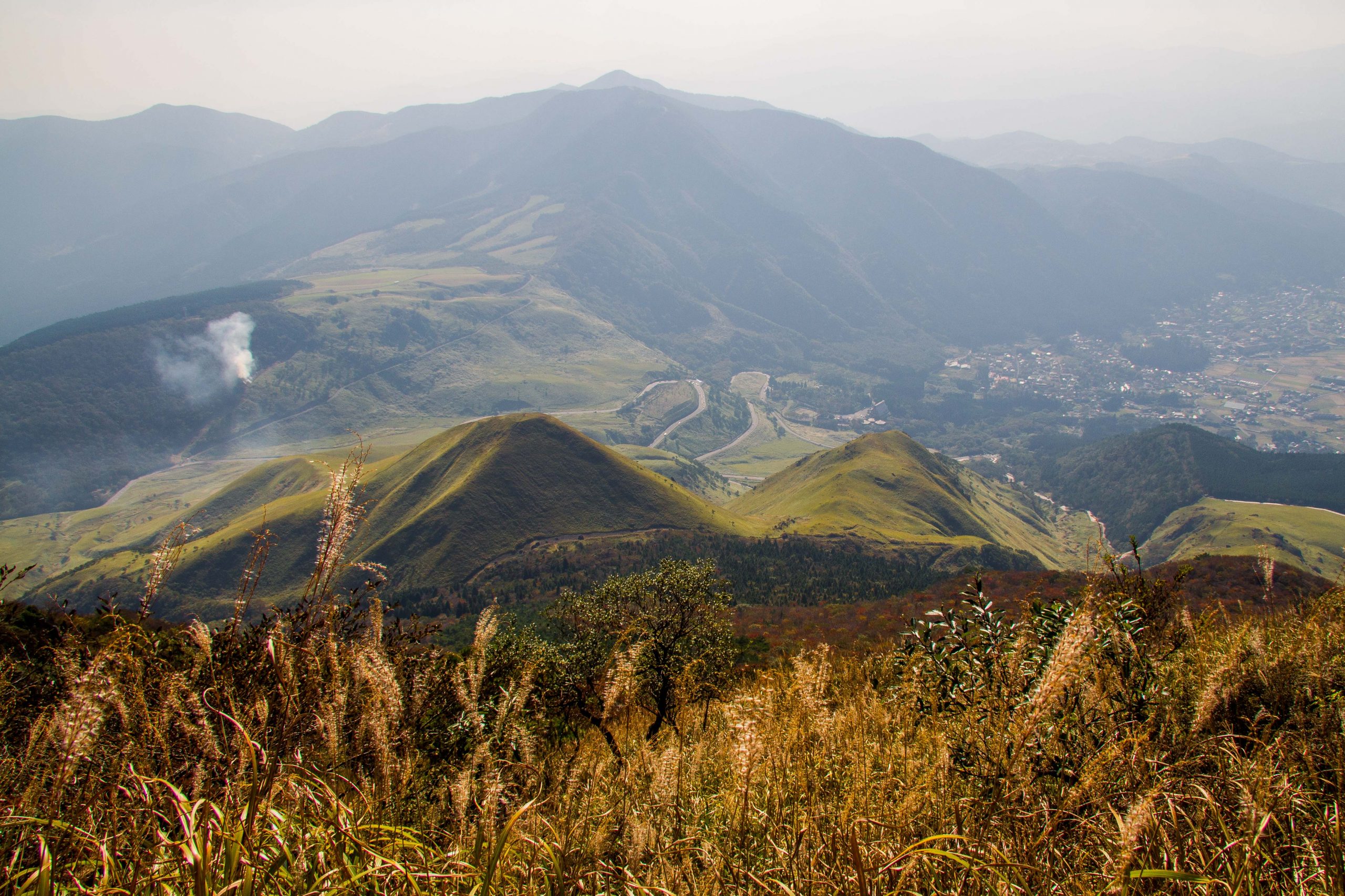 The tears came hard and fast. I had just reached the sign marking the last 800 meters of the Yufudake trail but instead of feeling elated that I was almost to the top of the mountain, I felt an overwhelming urge to give up and turn around. Switchback after switchback had made the terrain seem like an endless ascent and I knew that “almost” stretched ahead in another long series of back and forth that would only grow steeper and rockier.

As surprised as I was at my sudden outburst of emotion on the side of the mountain, I also felt relief. Finally, my body was allowing me to acknowledge just how exhausted I was. My legs were butter and my chest a furnace, but it was starting to feel good in the way exercise does when the endorphins show up to the party. It was my mind that was worn out; hiking is a mental sport and I was losing to the voice in my head.

Come on, I urged myself, think! There must be something in this brain of ours that can help us through this final push. And then out of nowhere, a passage from Wild illuminated itself inside my head. Counting! We can count!

Cheryl has never strayed far from that place some characters linger after you meet them in books, and I was never more grateful.  I began to clock my steps out loud: one two three four five six seven eight nine ten. 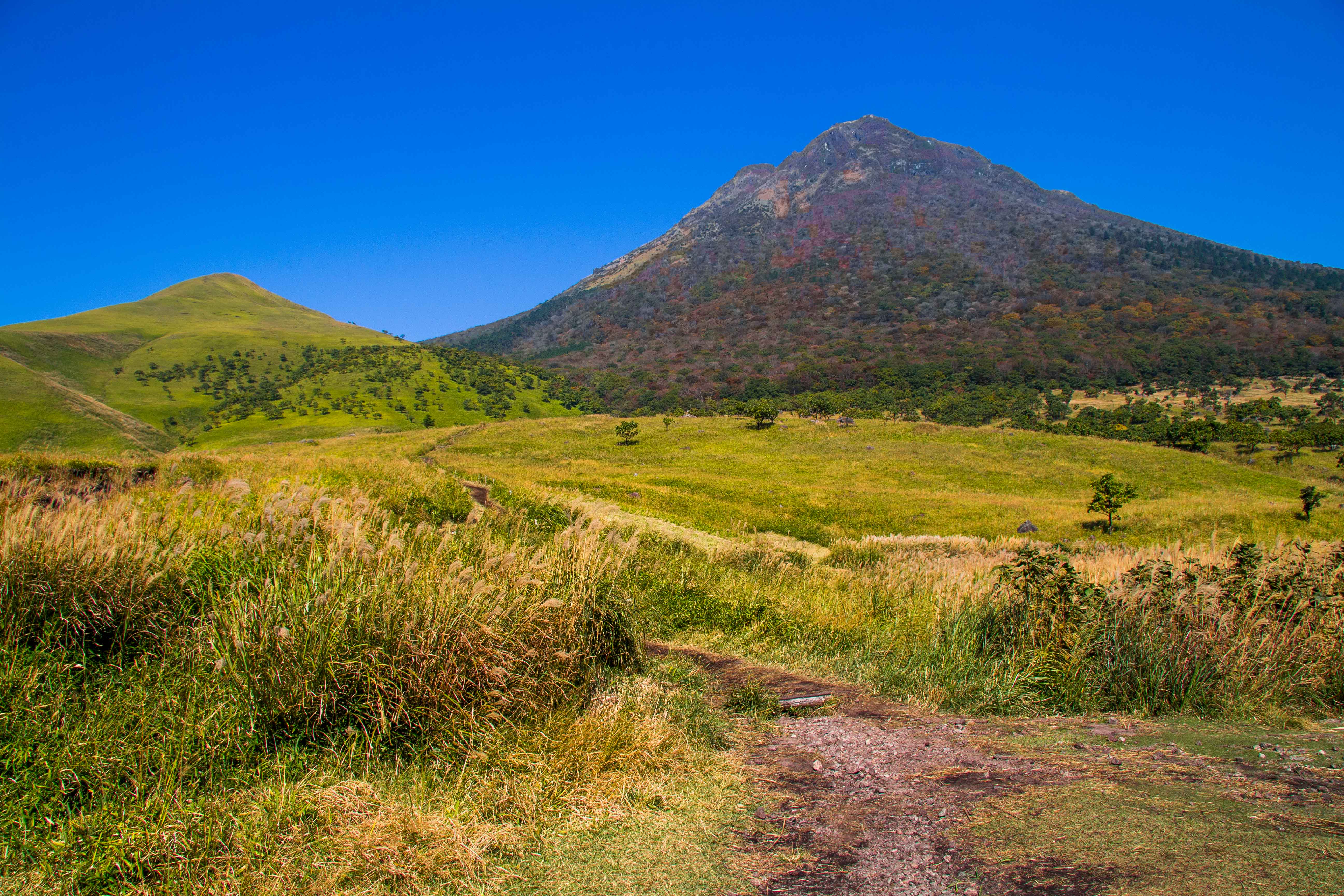 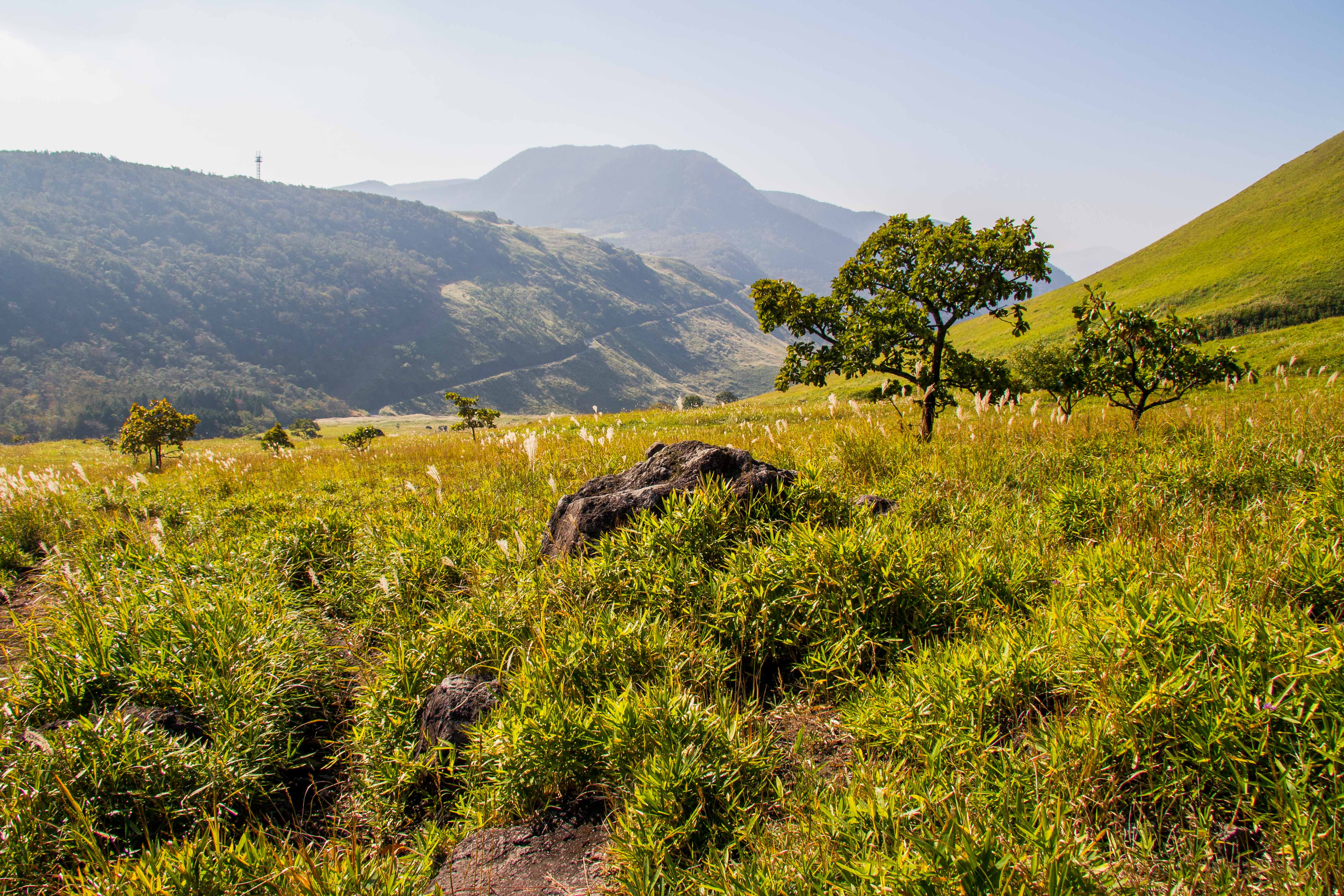 November 4 was one of the rare days when Mount Yufu emerges from the clouds and is surrounded by nothing but clear, blue skies. Austin and I were also very lucky, the host of our guesthouse informed us, to be in time to see the leaves on the mountain change colour. “One week only,” Shinya-san nodded solemnly.

The dormant volcano forms part of the Aso-Kuju National Park and towers 1,583 meters on the border of Yufuin, the quiet little onsen town where we were spending the weekend, and Beppu, a seaside hot spring resort.  The mountain is nicknamed the “little Fuji of Oita” for its twin camel hump-like peaks.

The 4140 meter trail is considered an easy to moderate hike for people with a basic level of fitness. While I’m not exactly sure I qualify as the latter, I think it’s fair to say that it’s more moderate than easy. The trail gets really steep in some spots, there are a lot of loose boulders, and you have to get on your hands and knees towards the end to traverse the rocks. 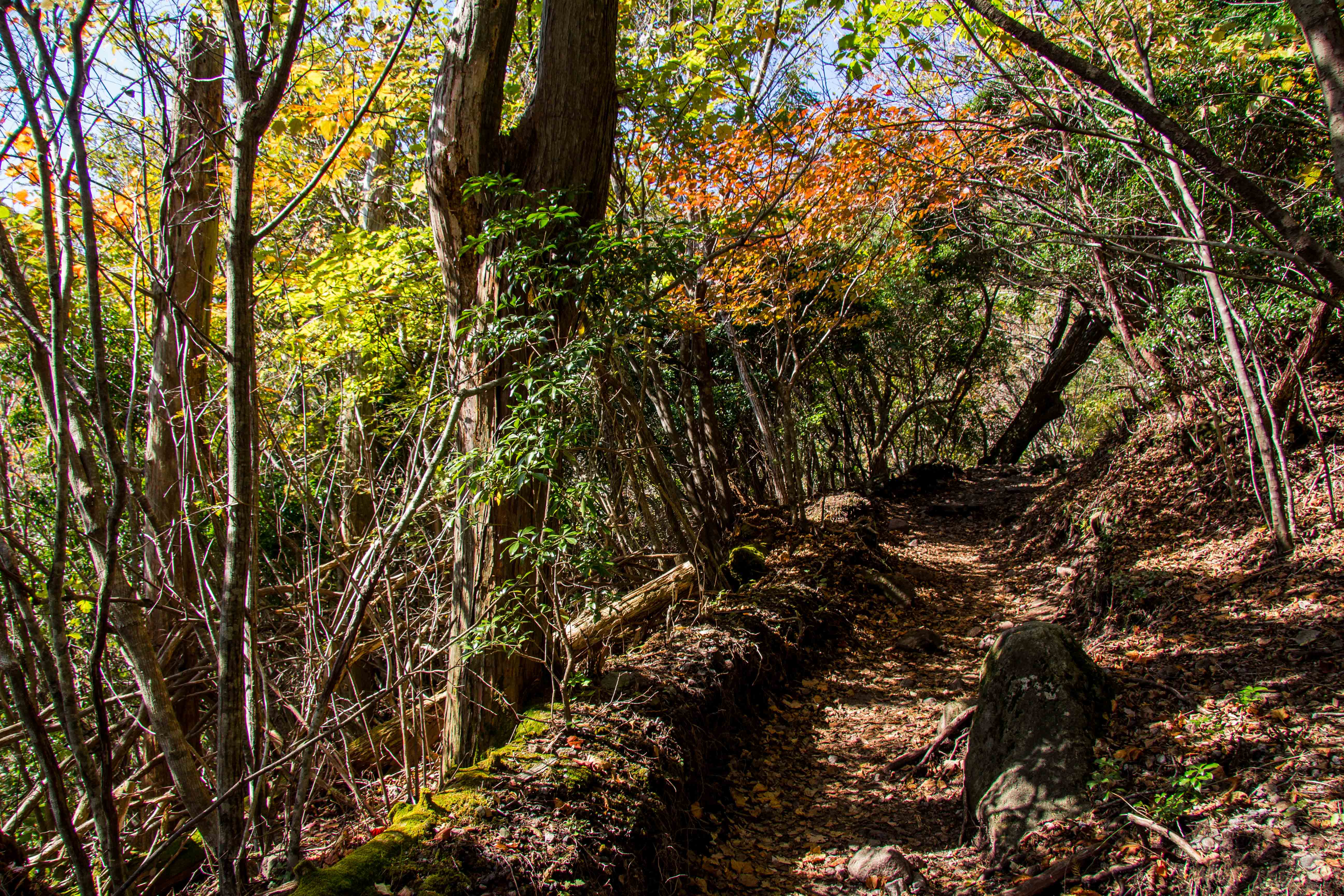 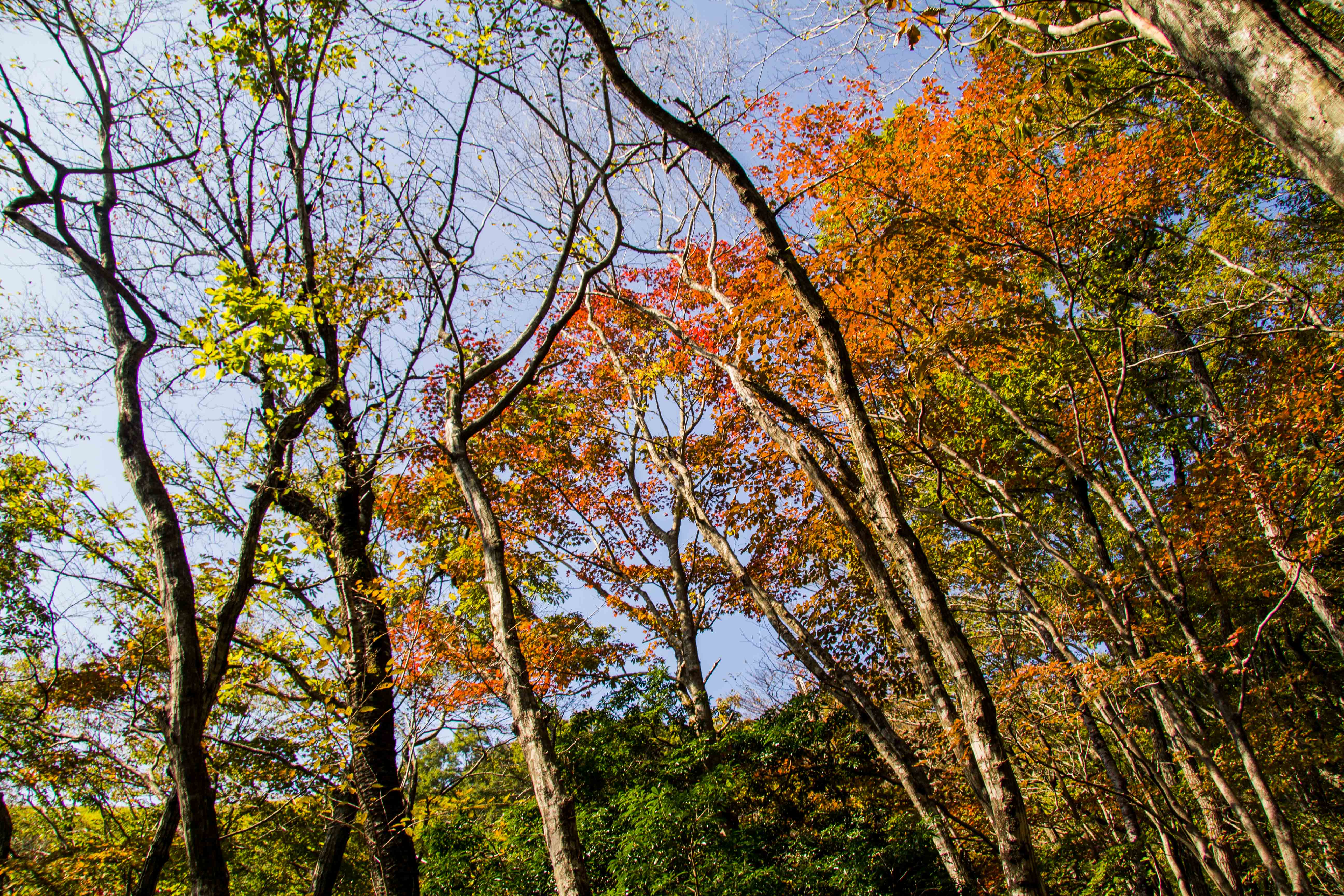 But the bulk of the hike is a gentle walk through the beautiful forest at the base of Yufudake. A 10 minute path leads from the start of the trail at a parking lot (with a rest area and public toilets) through grassy pastures and to the forest’s edge.

The trail forks here; we headed left, up towards Goyagoshi (合野越), a small clearing above the saddle between Yufudake and its neighbouring hill, Iimorigajo (飯盛ヶ城).

I waved Austin off to go ahead on his own and assumed full tortoise mode. The path wound slowly upwards and I stopped every now and then to take a few snaps. The leaves had indeed started to change colour, intercepting the evergreens with bright splashes of red and gold. I passed a few hikers on the way (well, really, they passed me) but for the most part, it was nice and quiet on that part of the trail. 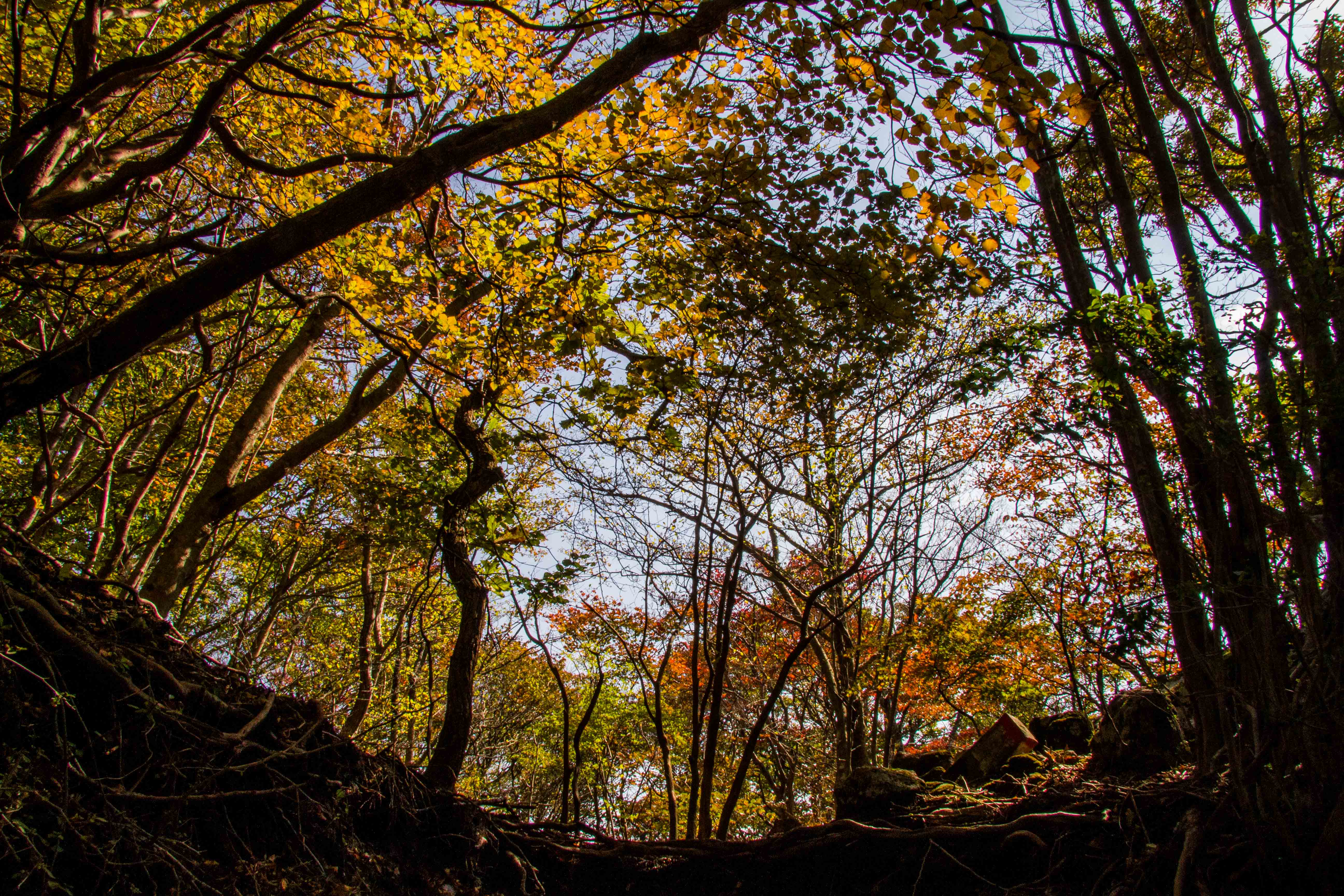 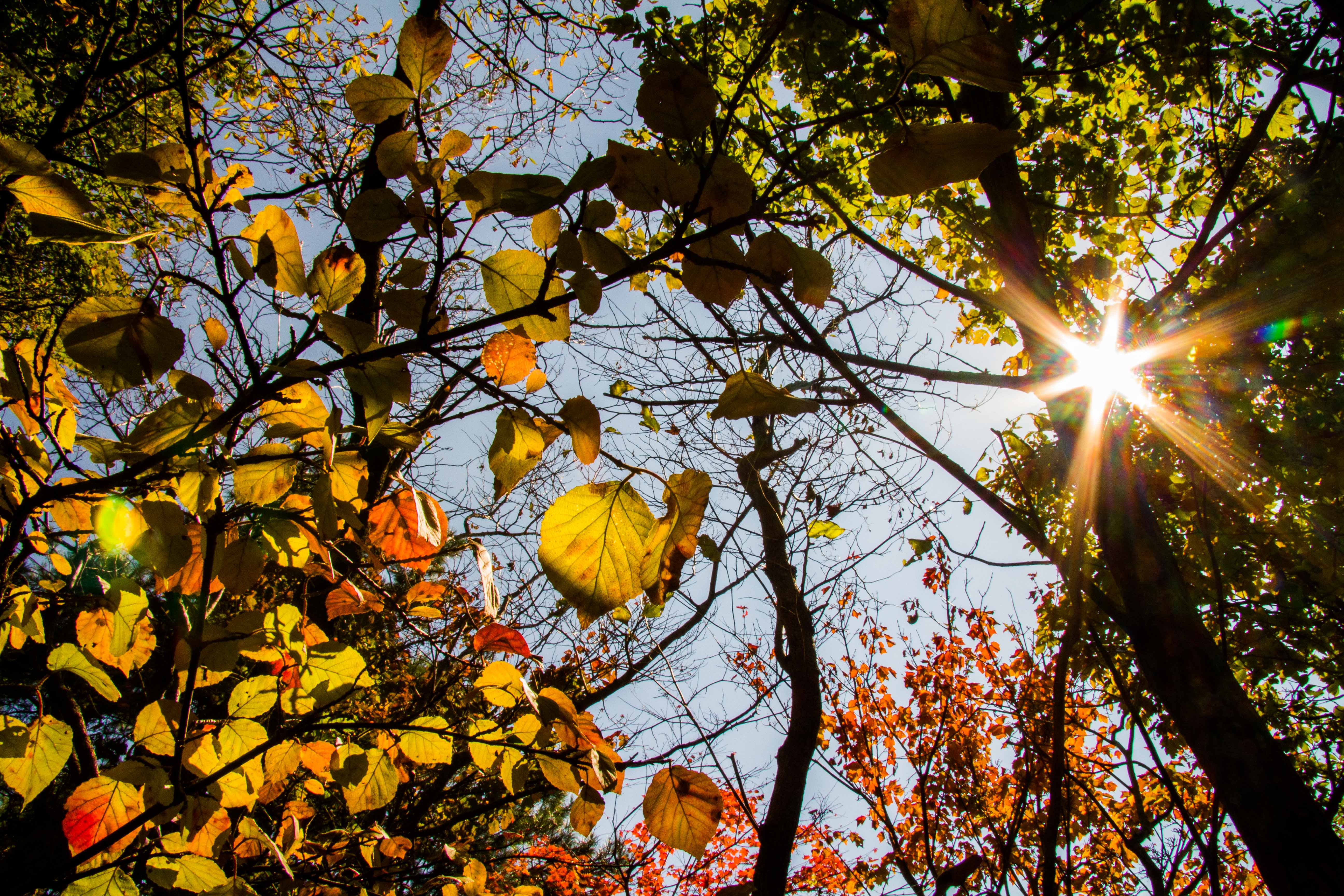 When I finally reached Goyagoshi, I collapsed on a bench next to Austin, eager to re-hydrate with a few snacks and Pocari Sweat. We had planned to get at least this far; the clearing was the last rest stop before the switchbacks began to the ascent of the peaks.

“Should we do it?” Austin asked with a smile.

“Sure,” I answered before I could change my mind. 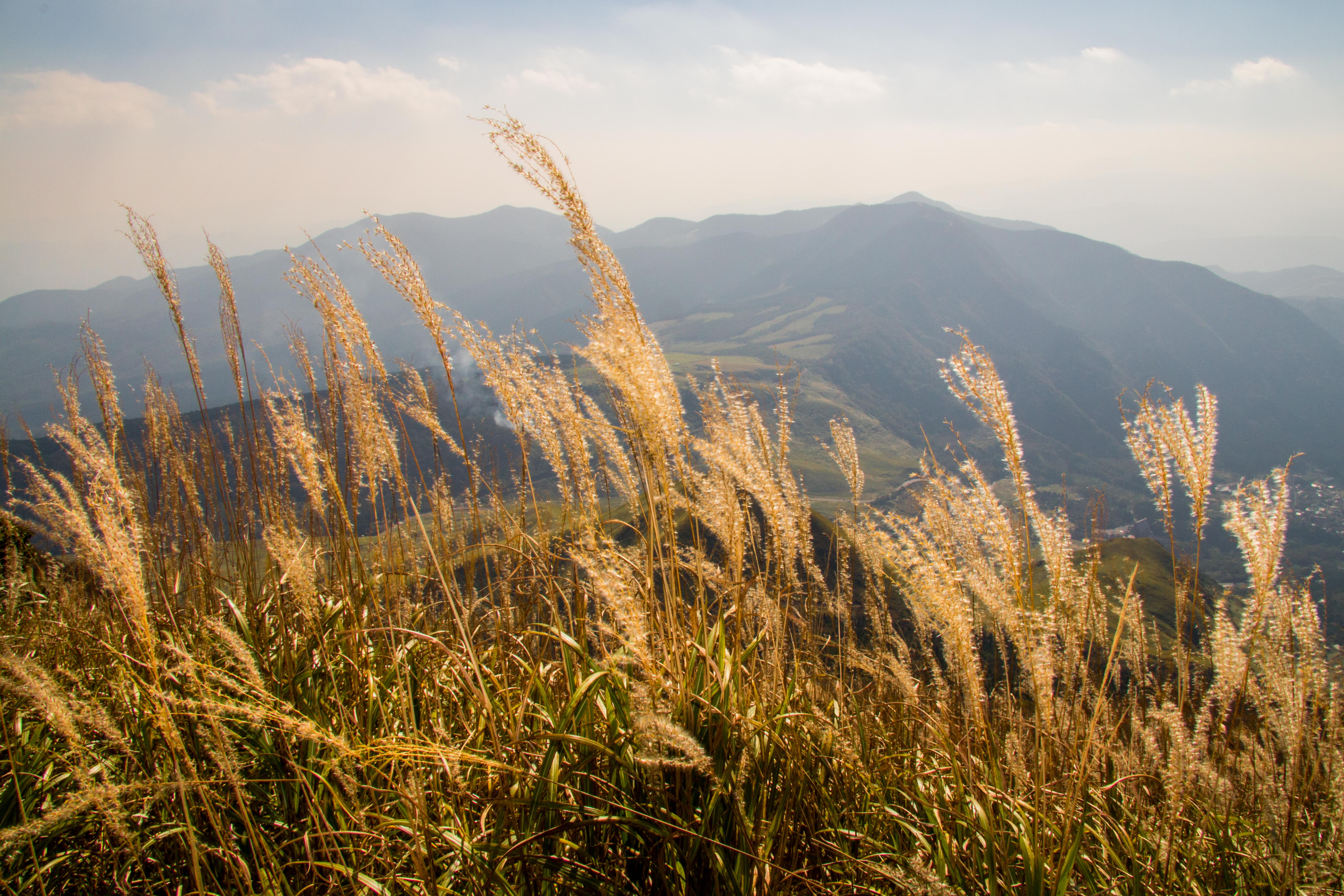 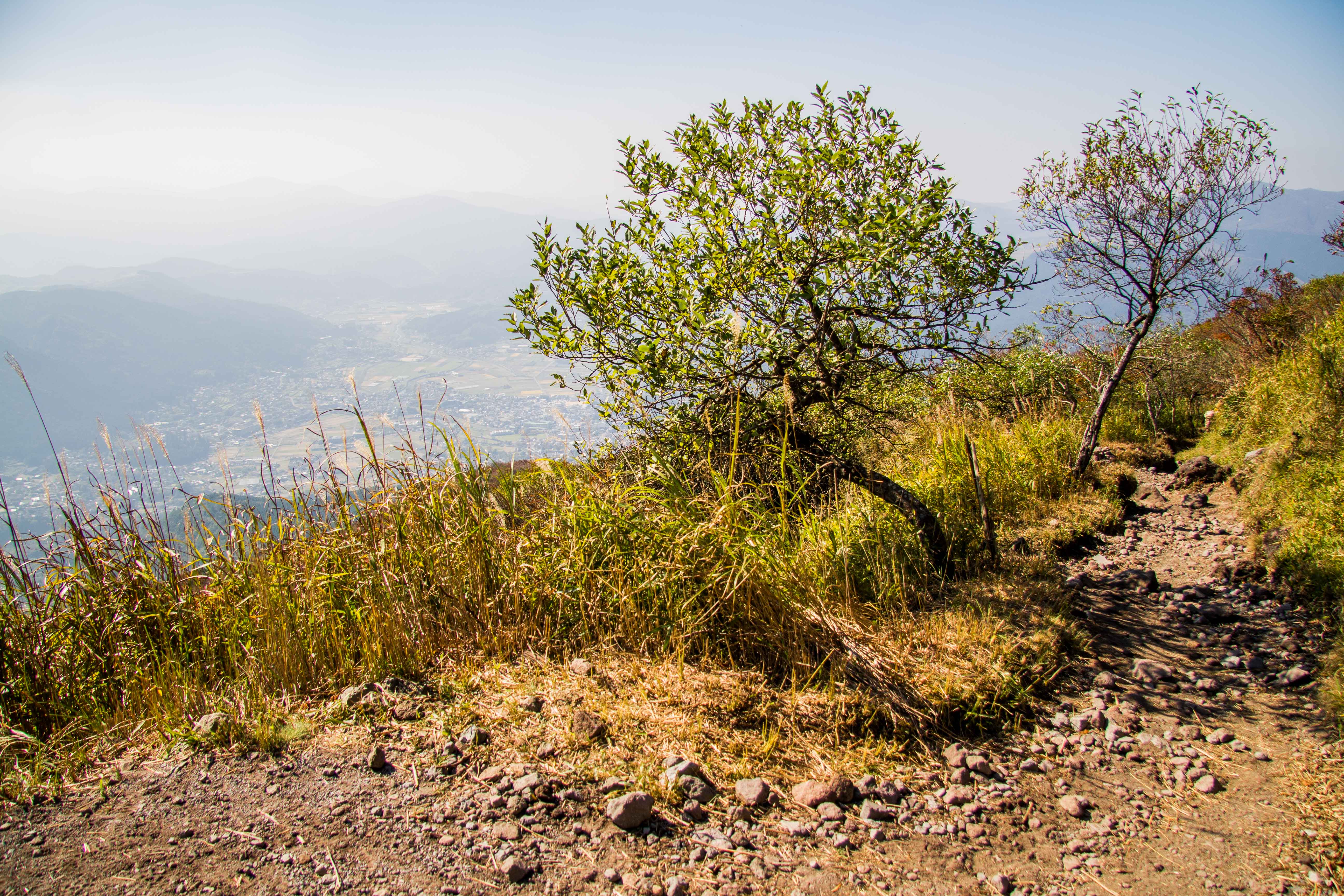 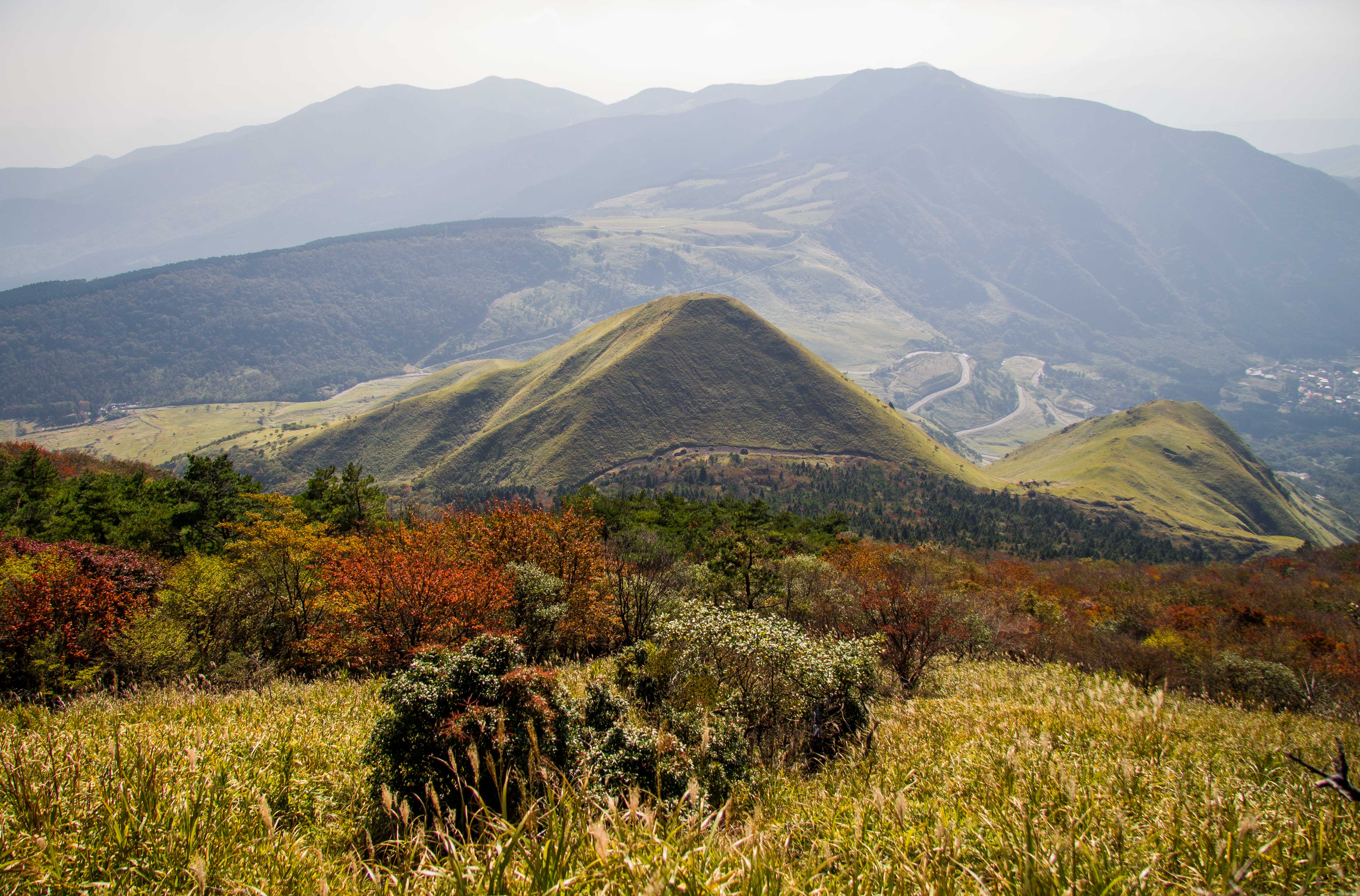 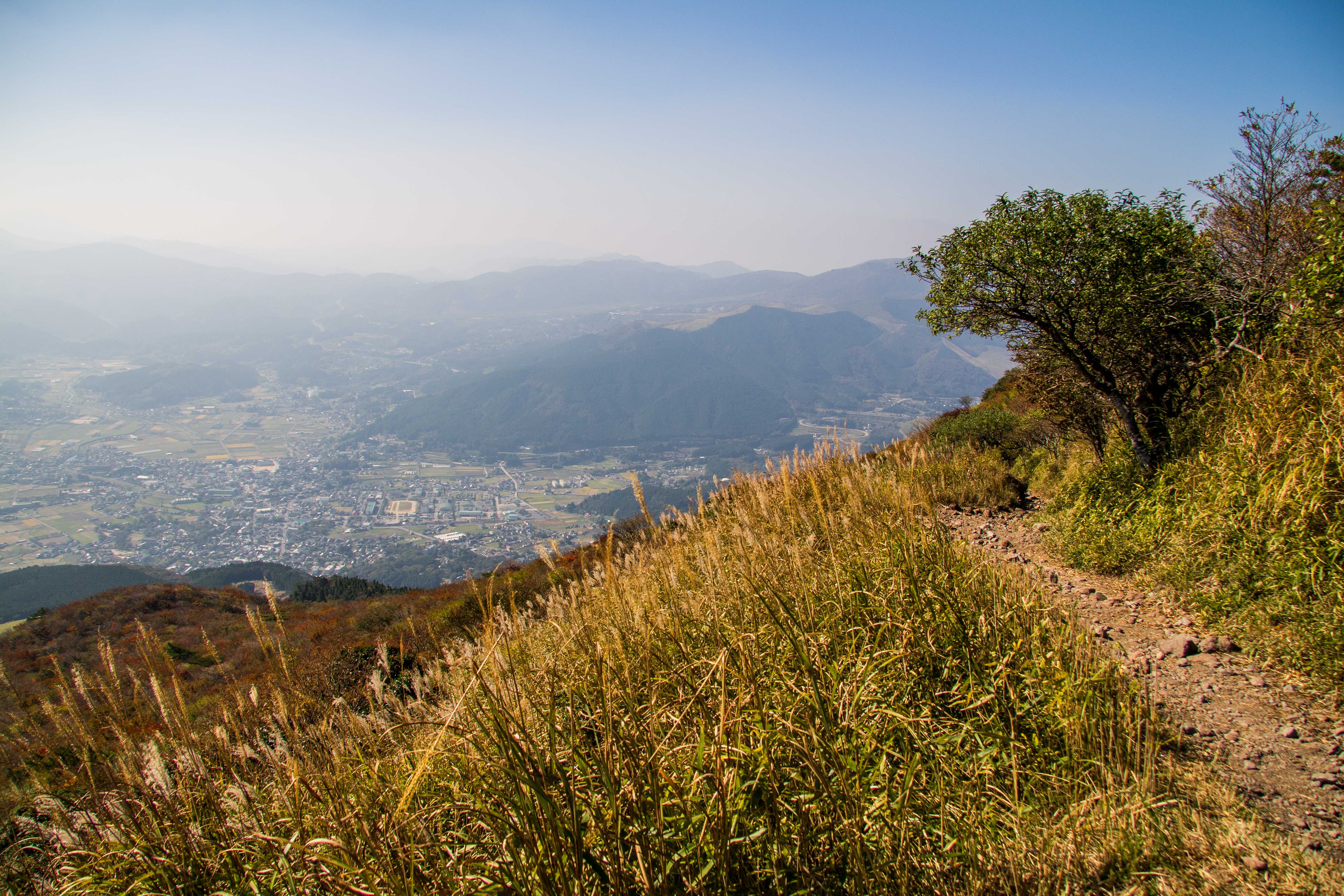 The trail veered off to the left and back into the forest. We walked it together until I couldn’t keep up anymore and then I waved him off again as he disappeared into the trees. It was busier up here, with hikers passing me on their way up or down every couple of hundred meters.

I settled into a routine of completing a switchback and then resting for a minute to catch my breath and take some pictures. Eventually I reached the tree line, where the views so gushed about on travel blogs and hiking websites finally revealed themselves.

I drank up the cool autumn breeze, saving the last sips in my water bottle for the end of the climb, and felt my pace finally gaining momentum. It carried me up through a few dozen more switchbacks until I reached the sign. 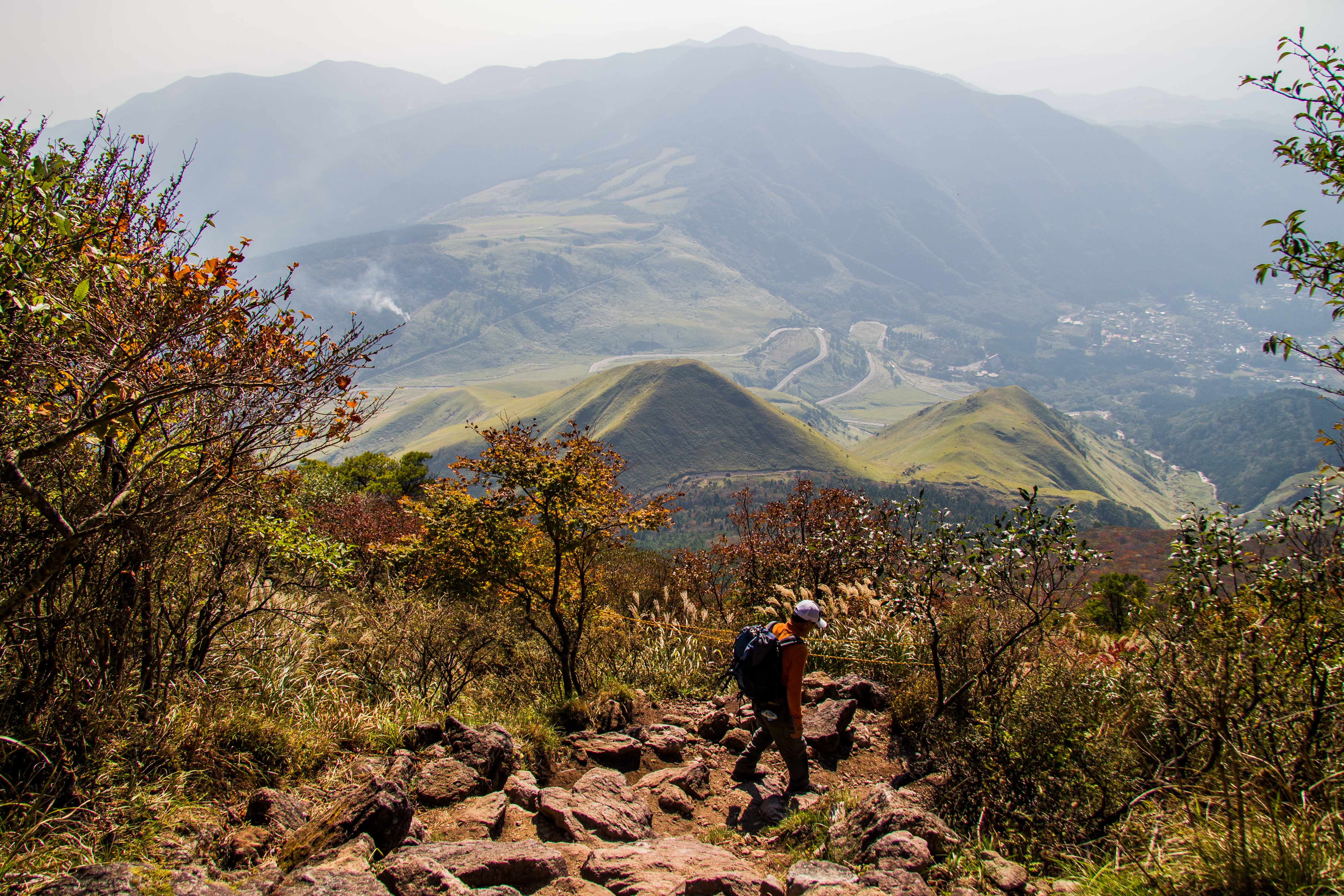 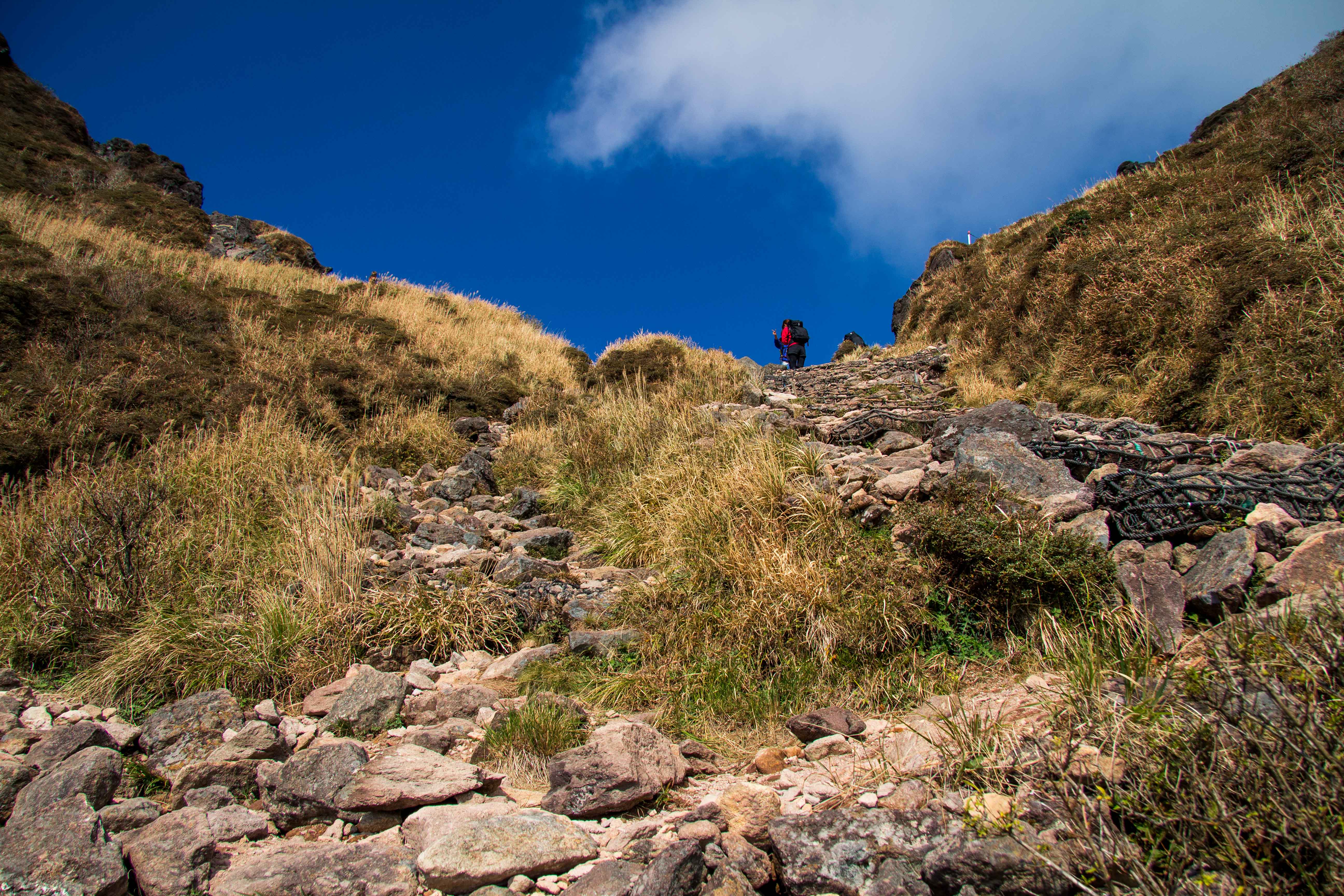 There was never a doubt in my mind that I could finish the hike, I just didn’t want to anymore. I was tired and sore and also rather over it. You’ve come this far, I told myself, that can be enough. But I knew it was bullshit; I would never allow myself to give up, not after coming so close to the end. Letting myself think that I might, though, provided a strange and unexpected comfort.

I wiped the tears from my face with the sleeve of my hoodie and trudged on. One two three four five six seven eight nine ten. 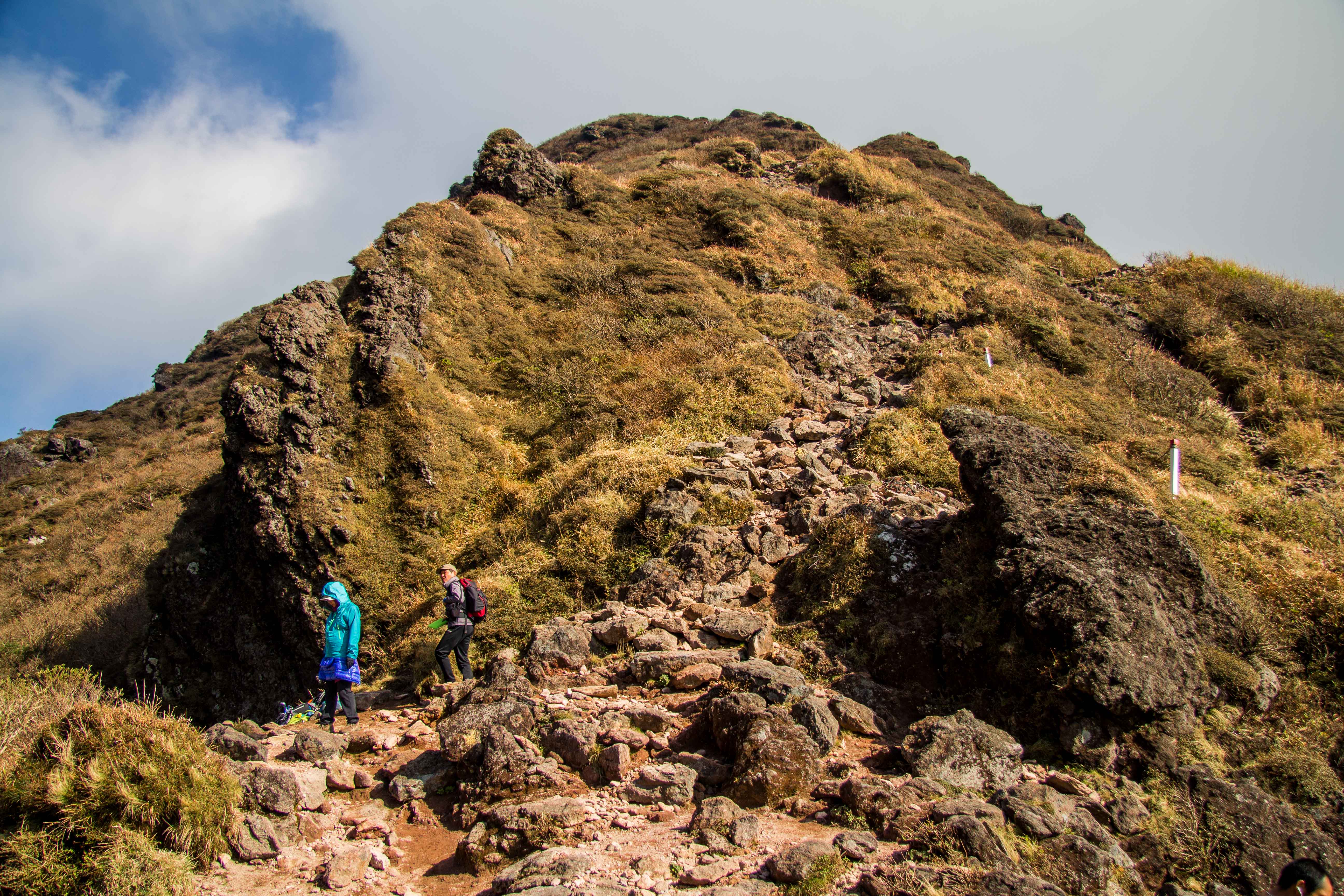 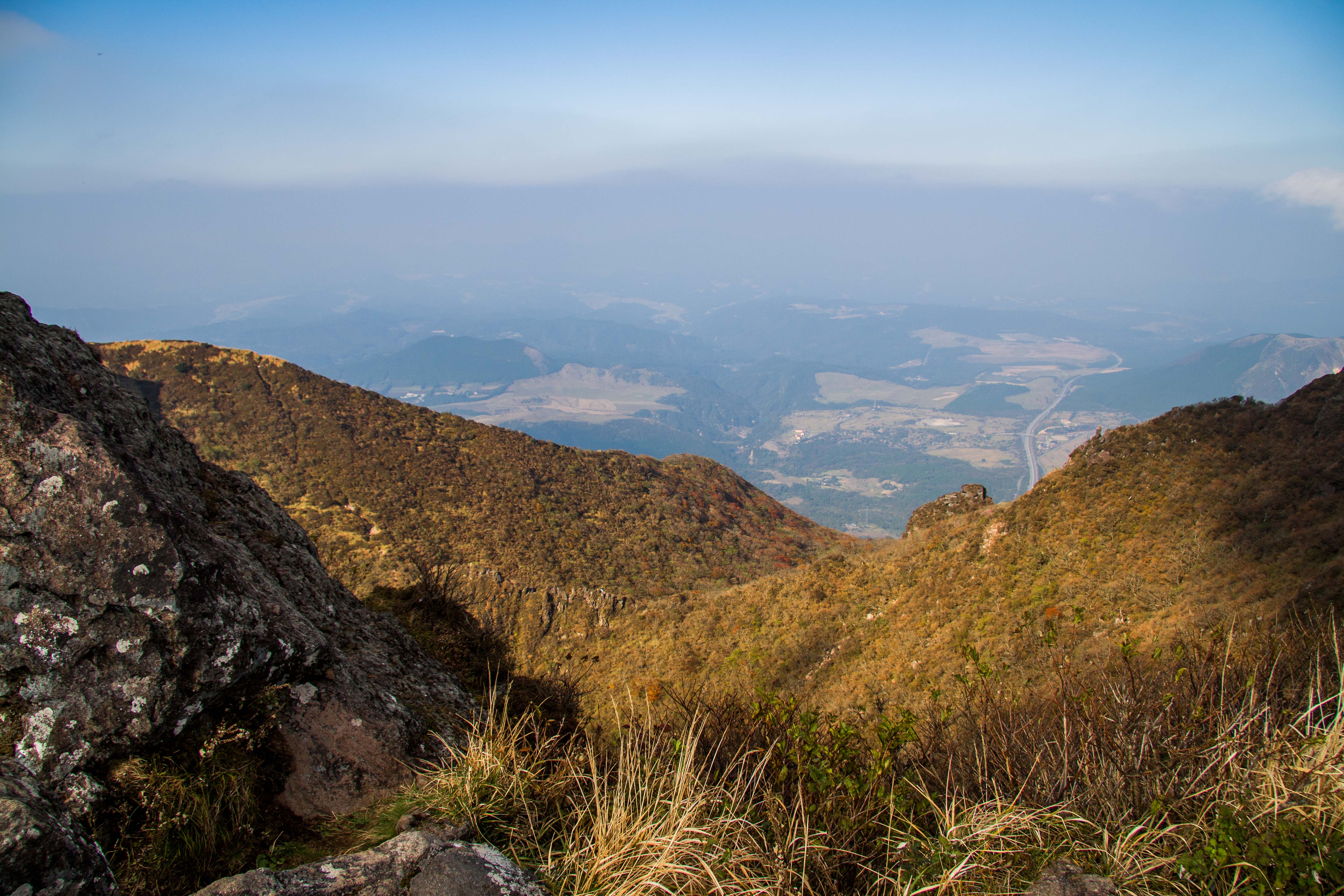 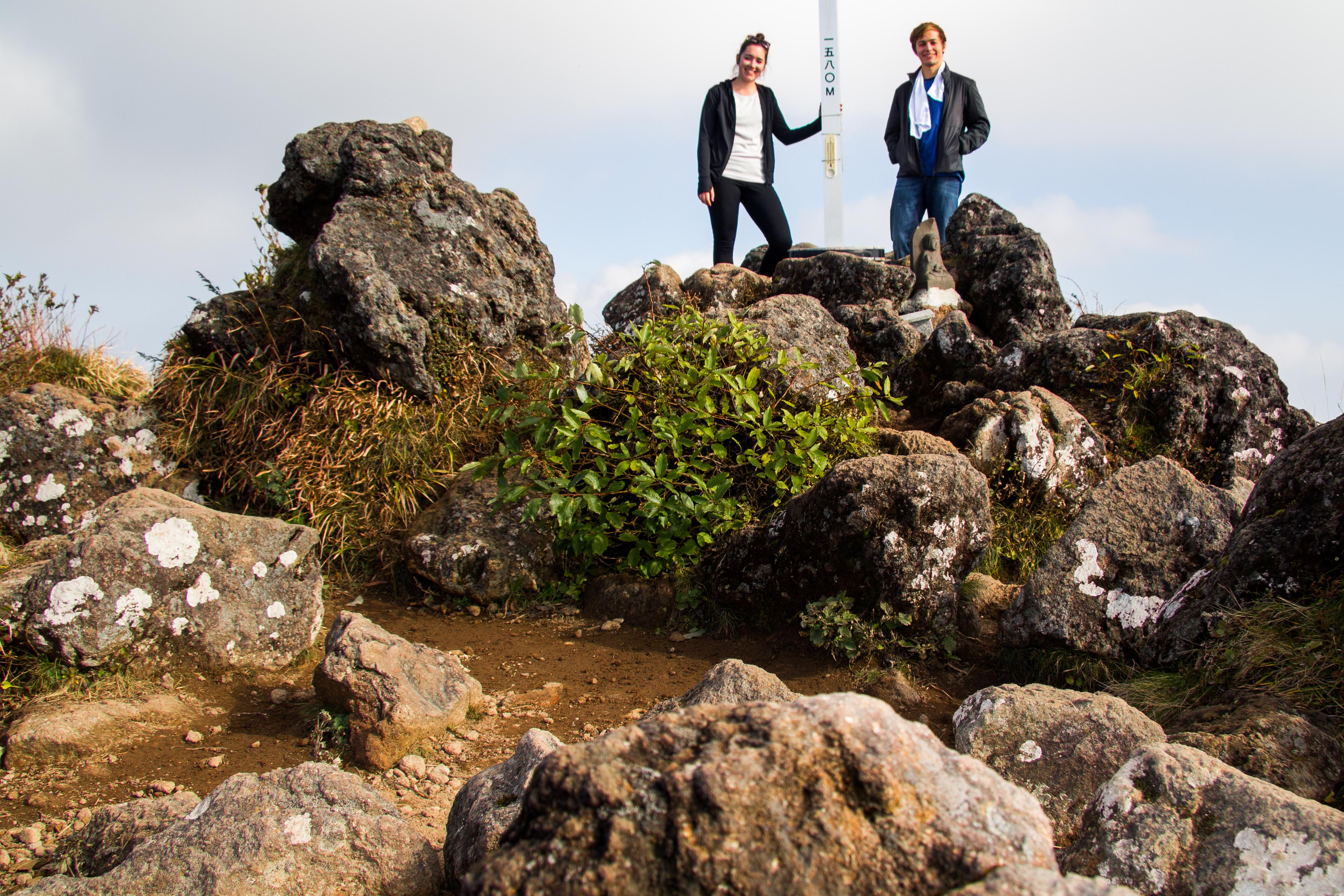 Austin, who had already reached the top of the east peak and gotten his commemorative photo, had come a little way back down to find me. And sure enough, after clambering up a few more rocks, I finally reached the saddle between the two peaks. To the left is the higher and more treacherous Nishi-mine (西峰), which involves some metal chain work to ascent. I opted for Higashi-mine (東峰) to the right, which seemed like a relatively easy scramble. Austin joined me for my final conquest and just 15 minutes later we were at the top.

“This is the first time I’ve ever climbed a mountain to its peak,” I said aloud. I was happy, but too tired to feel much more than that.

It was only hours later, on the car ride back into town, that it really caught up with me. As we snaked around the bends of the road, I looked out the window and up at the mountain and a huge smile spread across my face. Hey, I realised, I was up there. 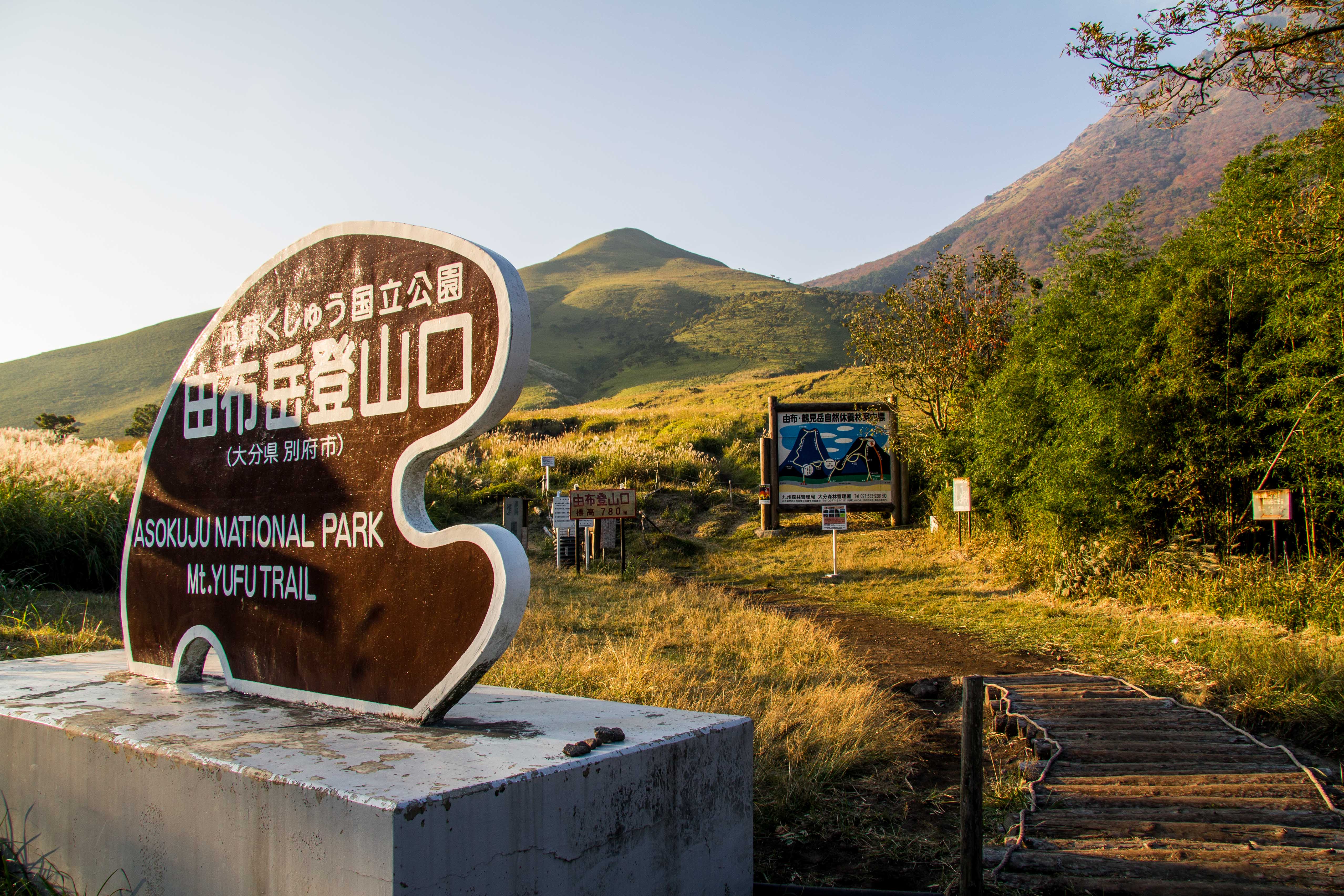 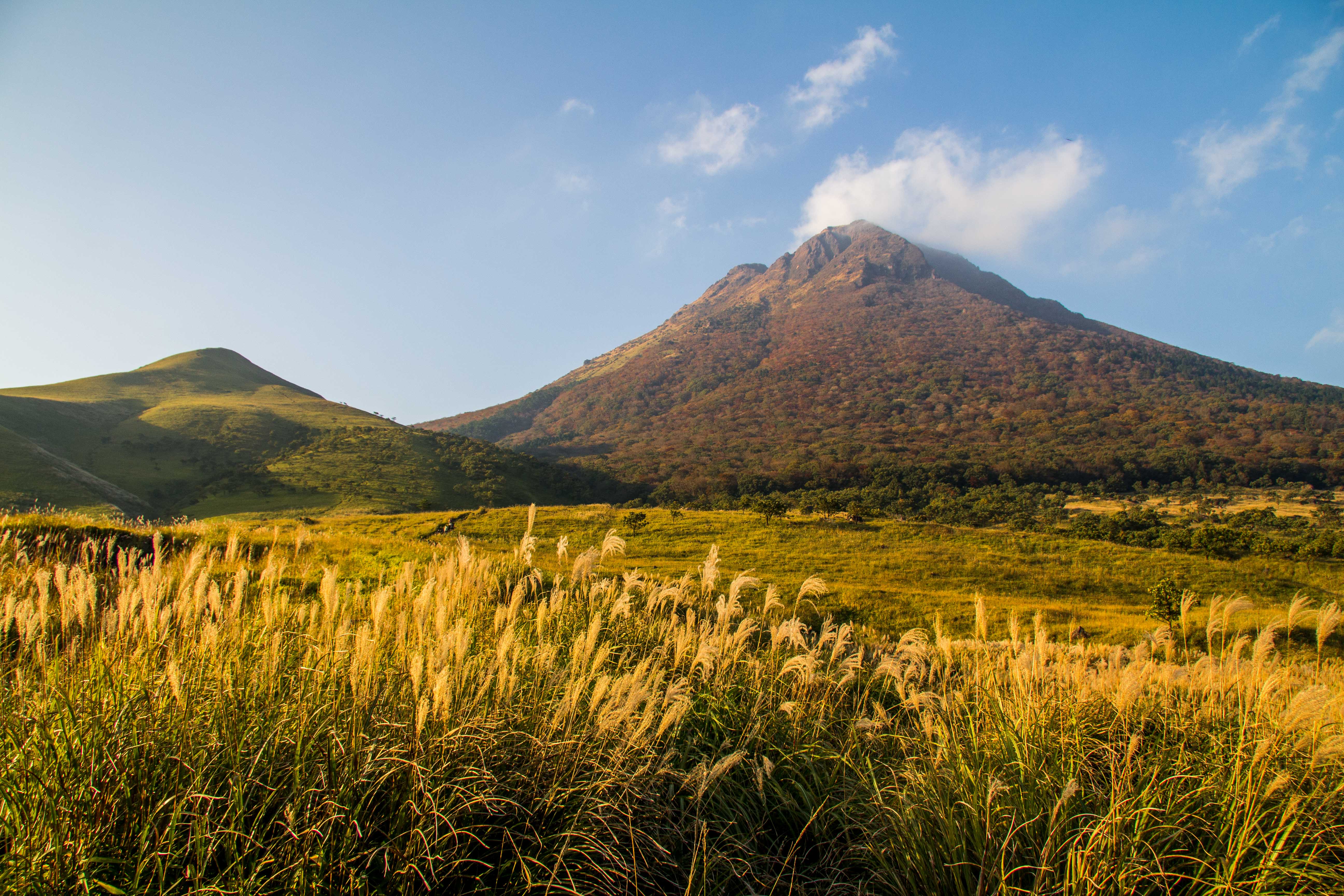 The trail is 8.28 km walking in total and is best between late April and November. From Yufuin bus center, take a Beppu-bound bus to Yufuin Tozanguchi (由布岳登山口). Click here for the bus schedule.

Simonereply
– In reply to: Cilla

I learned from the best 😉

Nice post! Planning to do this hike in November. Do you think older people (60+) can do this?

Simonereply
– In reply to: Lester

Thanks Lester! And definitely – there were certainly a few who passed me on the way up 🙂