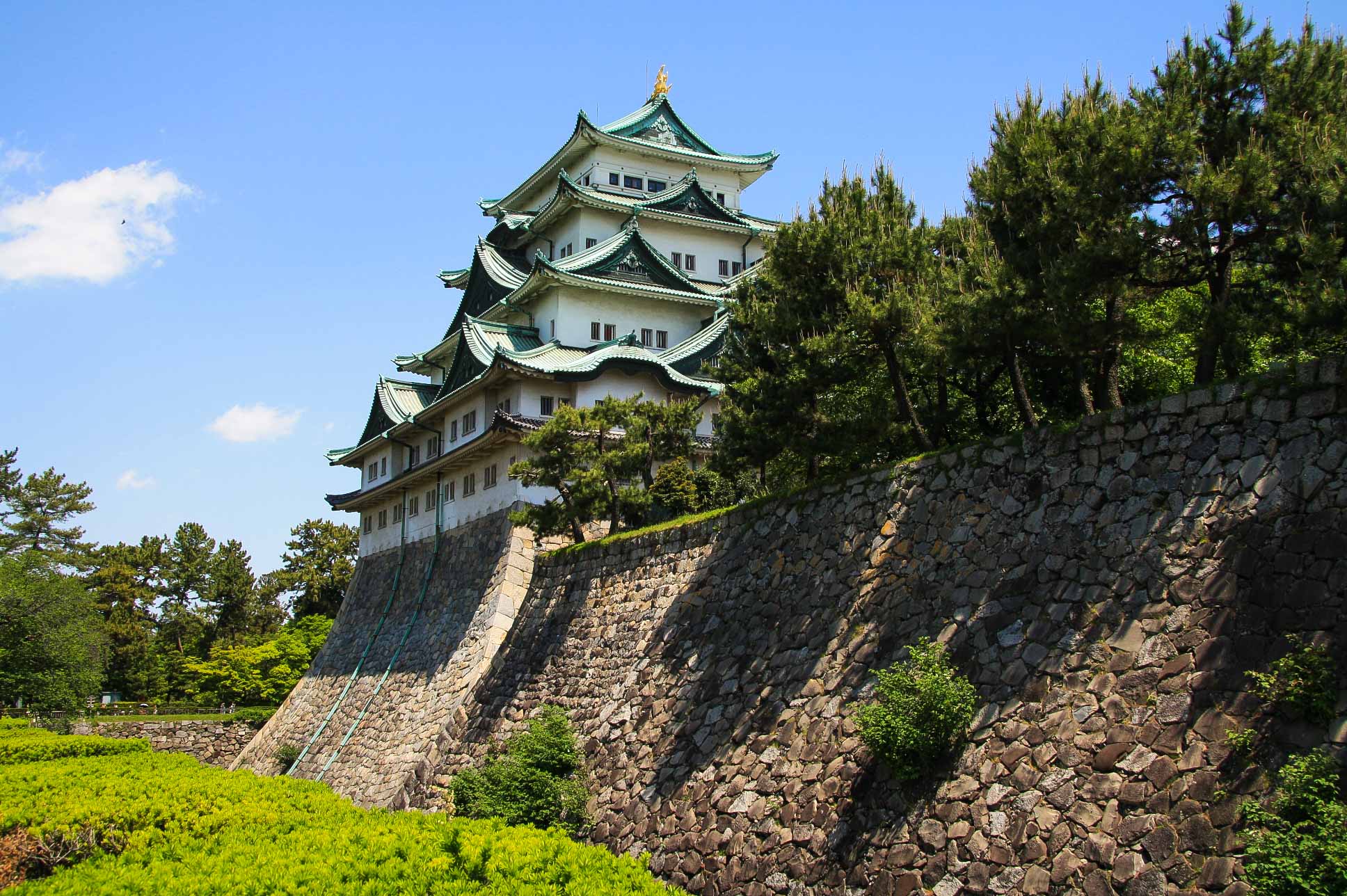 After destroying an entire tower with the flick of his tail, Godzilla approaches a tall, white building with full force. But then he stumbles and falls into instead, nonetheless sending it crashing to the ground. The target of the mon-star’s rage in this epic scene from Mothra v. Godzilla is, of course, the historic Nagoya Castle.

The smell of hot food and beer wafted up my nostrils. Having been lulled to a half-slumber by the chugging of the train, I opened one eye to find our new neighbours arranging their brunch on a drop-down tray. Behind us, a group of rowdy men were drinking away their hangover from the night before. I turned to Mark and we exchanged a look. Half annoyed and half amused, I turned up the volume on my phone, readjusted my ear buds and drifted off back to sleep.

It was on a journey much like this one that we had seen Nagoya Castle for the first time. The Shinkansen from Hiroshima to Tokyo blitzes straight through Aichi’s capital city. This time, we’d come from Osaka, taking a slower, cheaper route that snakes through the beautiful countryside of Mie prefecture. We were to spend three days of Golden Week exploring the heart of Japan.

Nagoya is located at the center of Honshu and is Japan’s fourth most populated city. The urban hub plays an important role in the country’s industrial society; it contains ceramics, textile, brewing and aviation industries and is home to the headquarters of Toyota. Several defunct factories also operate as museums.

The city also has a long history as the birthplace of three feudal lords, most notable Tokugawa Ieyasu. Ieyasu was victorious at the Battle of Sekigahara in 1600 which marked the start of the Edo Period. He became the first Shogun of Japan and ordered Nagoya Castle to be built to secure an important position on the Tokaido Road and to ward off attacks from the opposing Toyotomi clan in Osaka.

Ieyasu’s ninth son, Tokugawa Yoshinao, became the first lord of Nagoya Castle and continued to improve the infrastructure of Nagoya as a castle city. The lavish Hommaru Palace was built to serve as his official residence and place of office.  The interior of the single storey, 30-room structure was decorated with coved, lattice ceilings, gilded decorative fittings and beautiful screen paintings of cherry blossoms, pheasants and tigers. 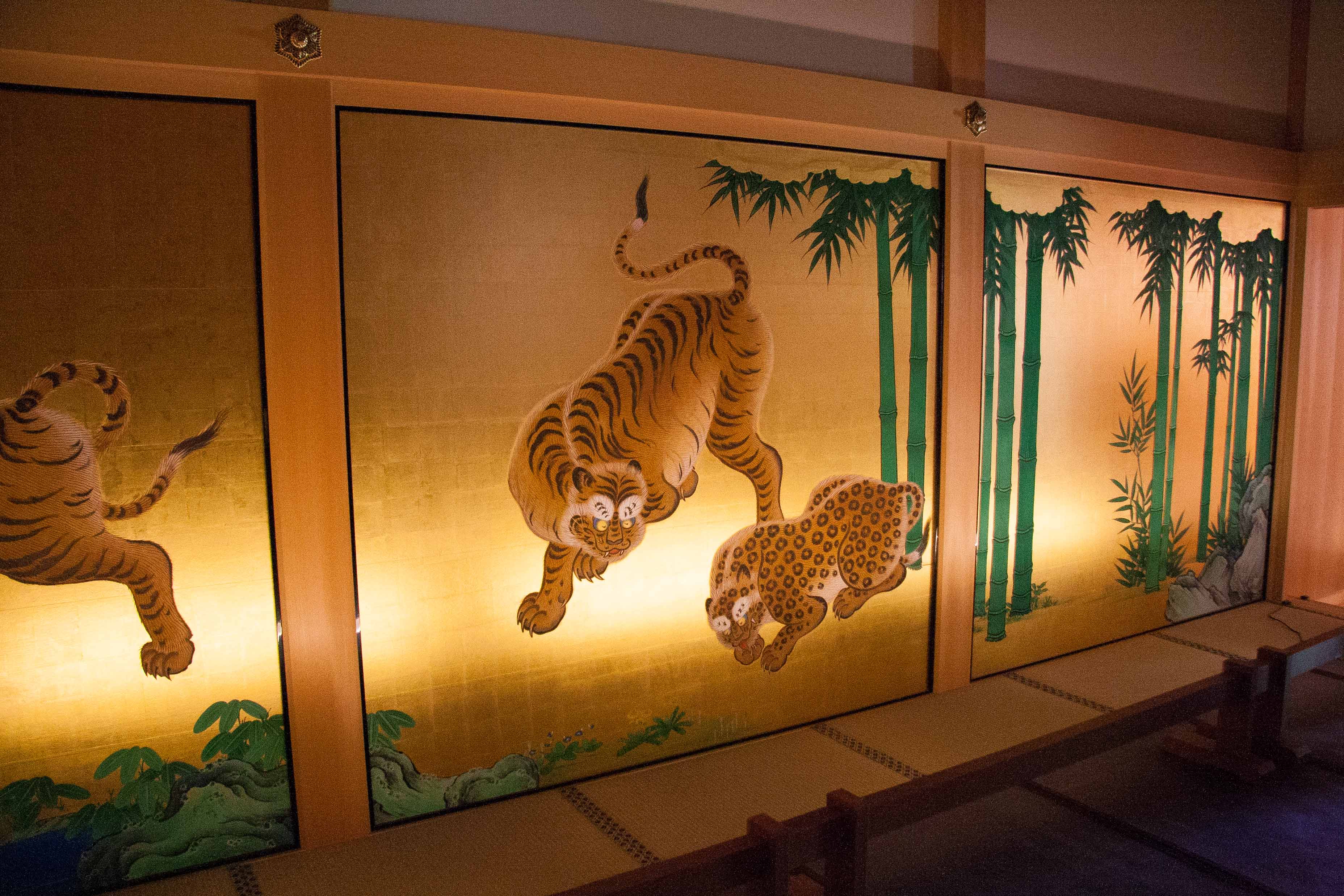 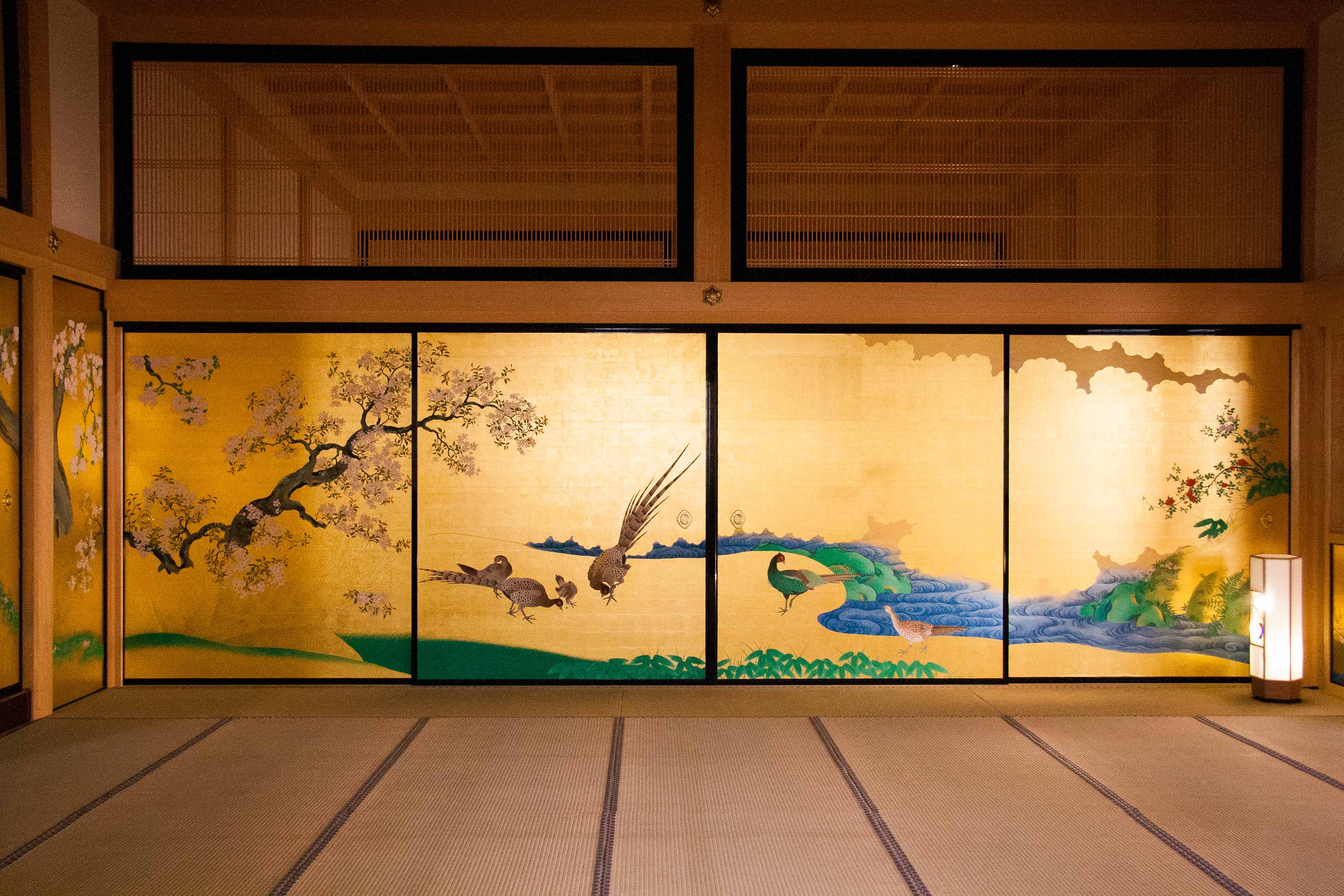 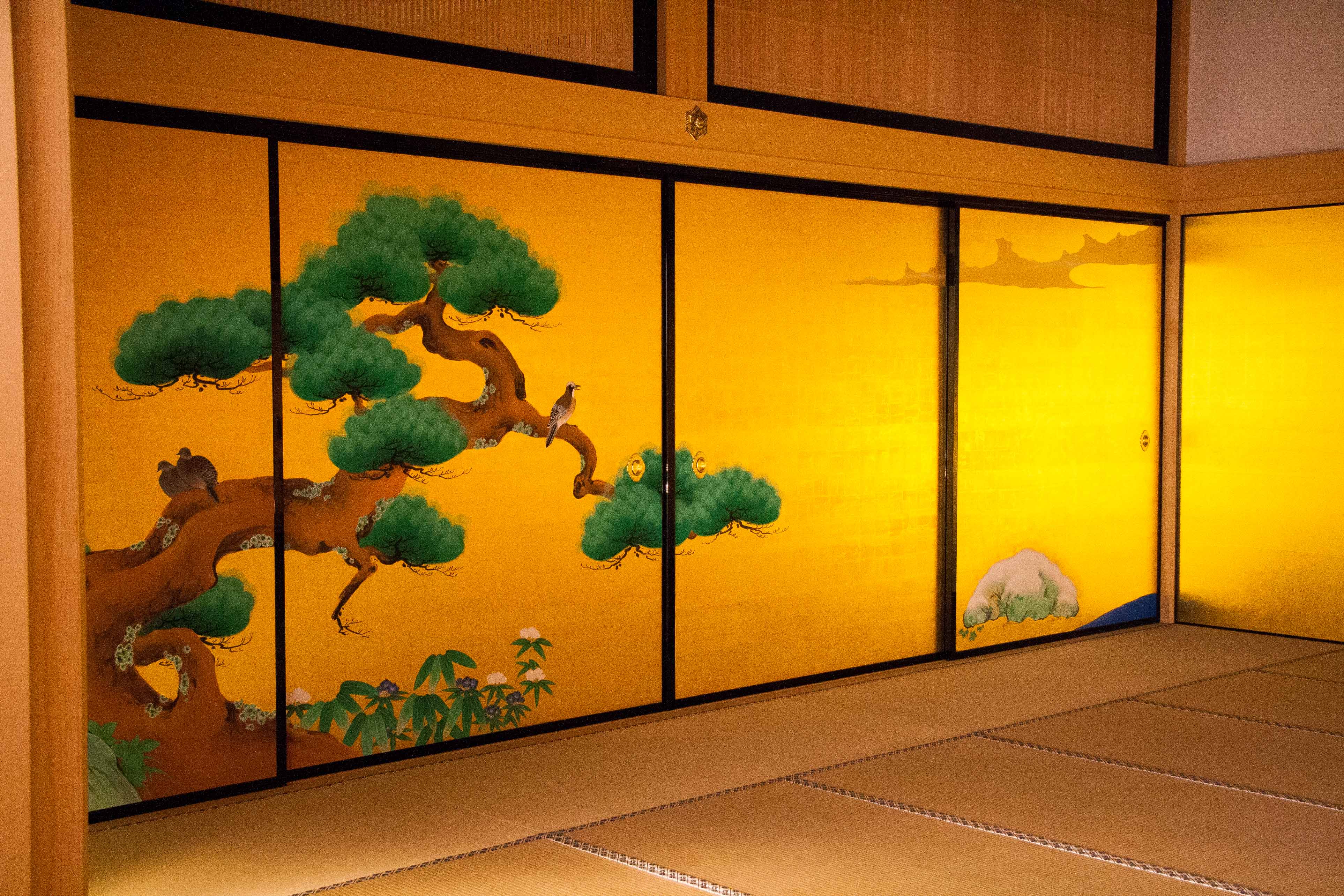 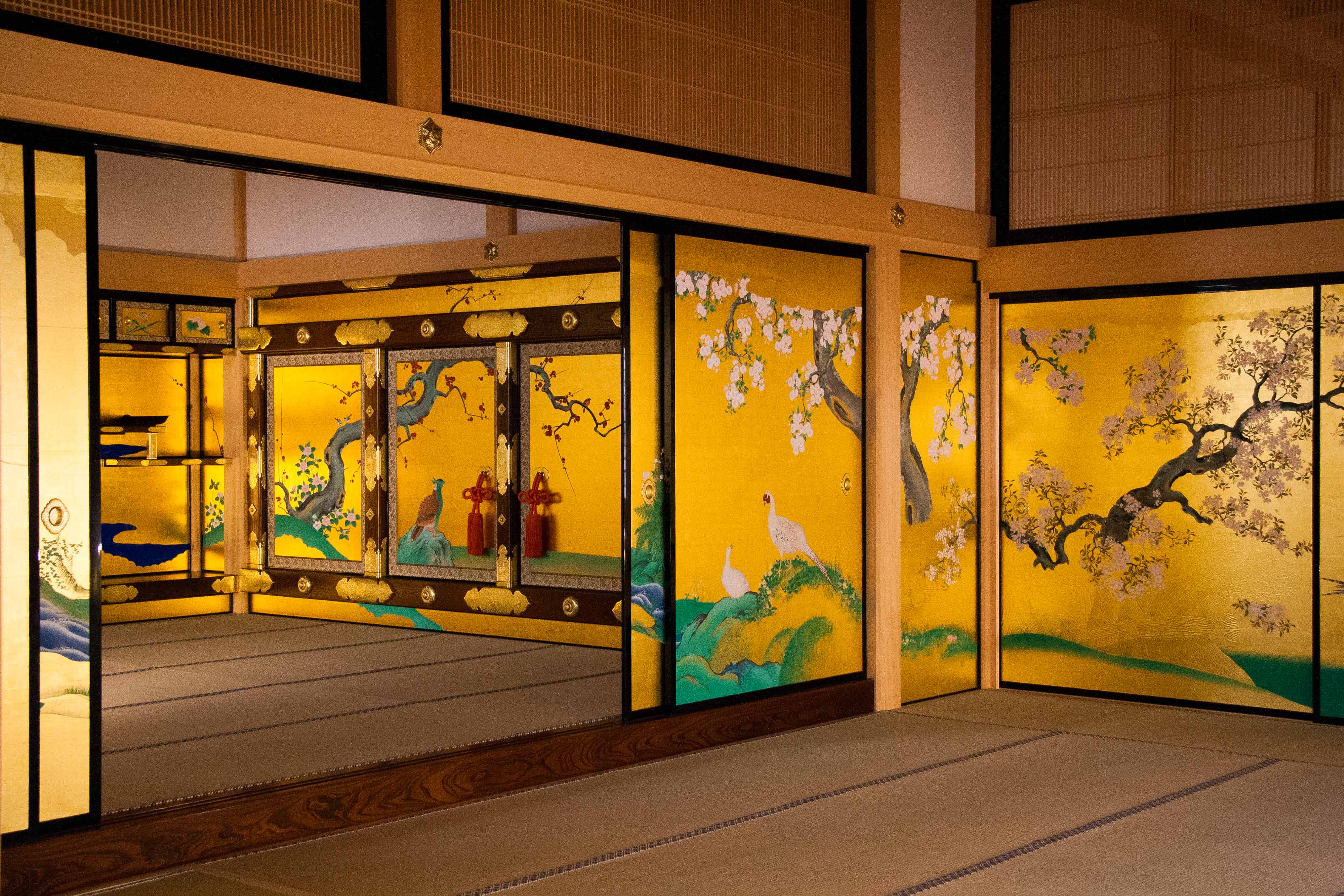 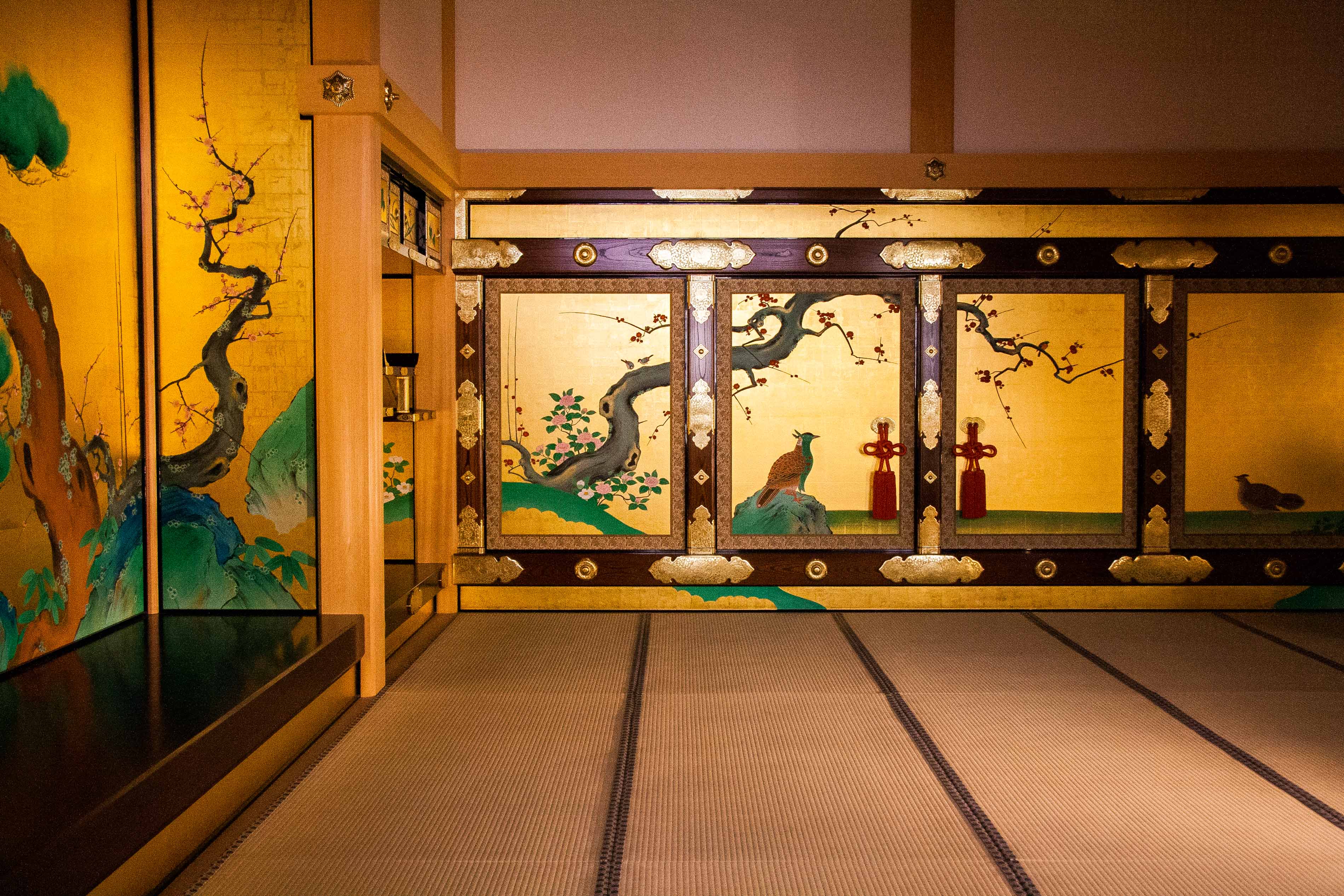 The fortress continued to flourish under the Owari Tokugawa family until the Meiji Restoration, and even then, it was spared in the government’s order to dismantle all castles deemed unnecessary to the military.  In May 1946, however, most of the castle’s buildings, including the main tower and Hommaru Palace, burned down in the air raids of World War II.

But just like its re-emergence in the Godzilla and Mothra: The Battle for Earth film, Nagoya Castle was eventually brought back from the (architectural) dead. In 1959, the main tower was rebuilt as part of post-war rehabilitation efforts.

The restoration of Hommaru Palace, thought, is still underway. The project began in 2009 and is scheduled to be complete in 2018. Currently, only the main gate, entrance room and main hall are open to the public. 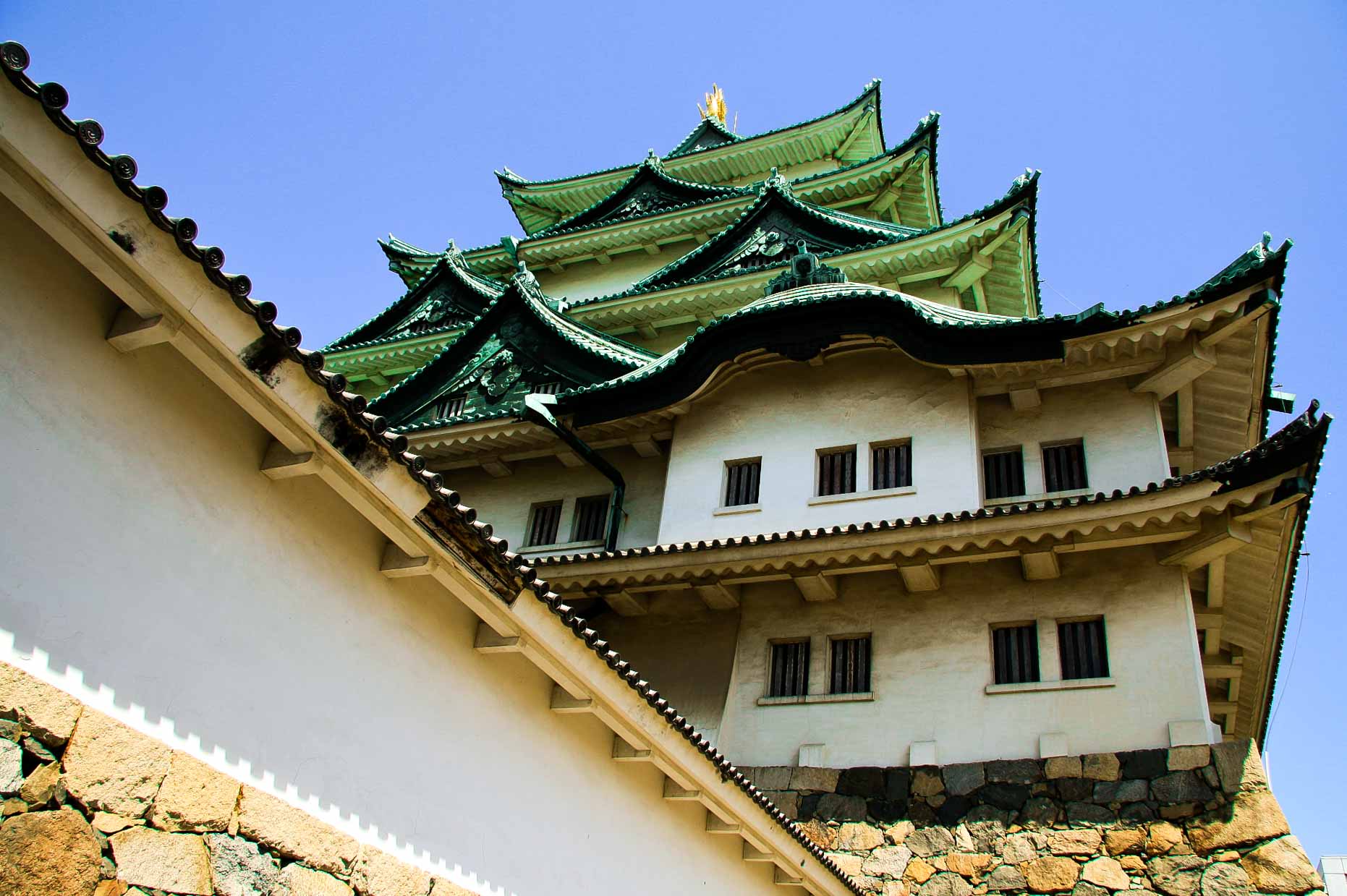 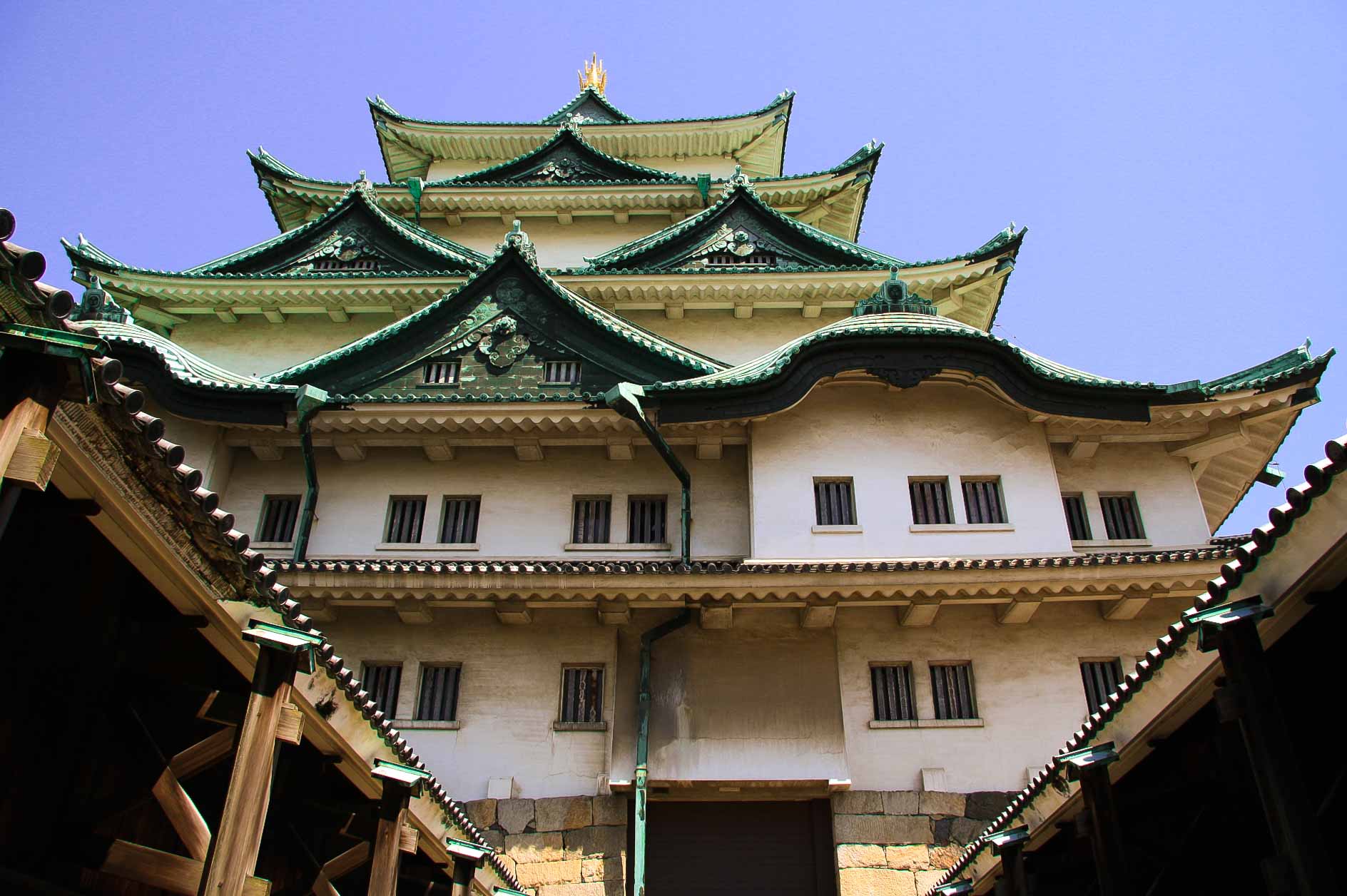 Mark and I arrived at the Castle fairly early on the morning on the second day of our trip to Nagoya, but even then there was a line to get into the Palace. We exchanged our shoes for slippers and then did the Japanese Shuffle, as my sister calls it, through the building.

The screen paintings on the palace’s sliding walls and doors are the most exquisite I have seen in a Japanese castle. Artists Kano Tanyu and Kano Mokunosuke from the Kano School of Painting created the original works according to a different theme for each room.

At the time of the air raids, many of the screen paintings were being kept in storehouses and thus survived the fire, but these are preserved in storage today as Important Cultural Assets. The paintings that adorn the renovated palace are replicas. 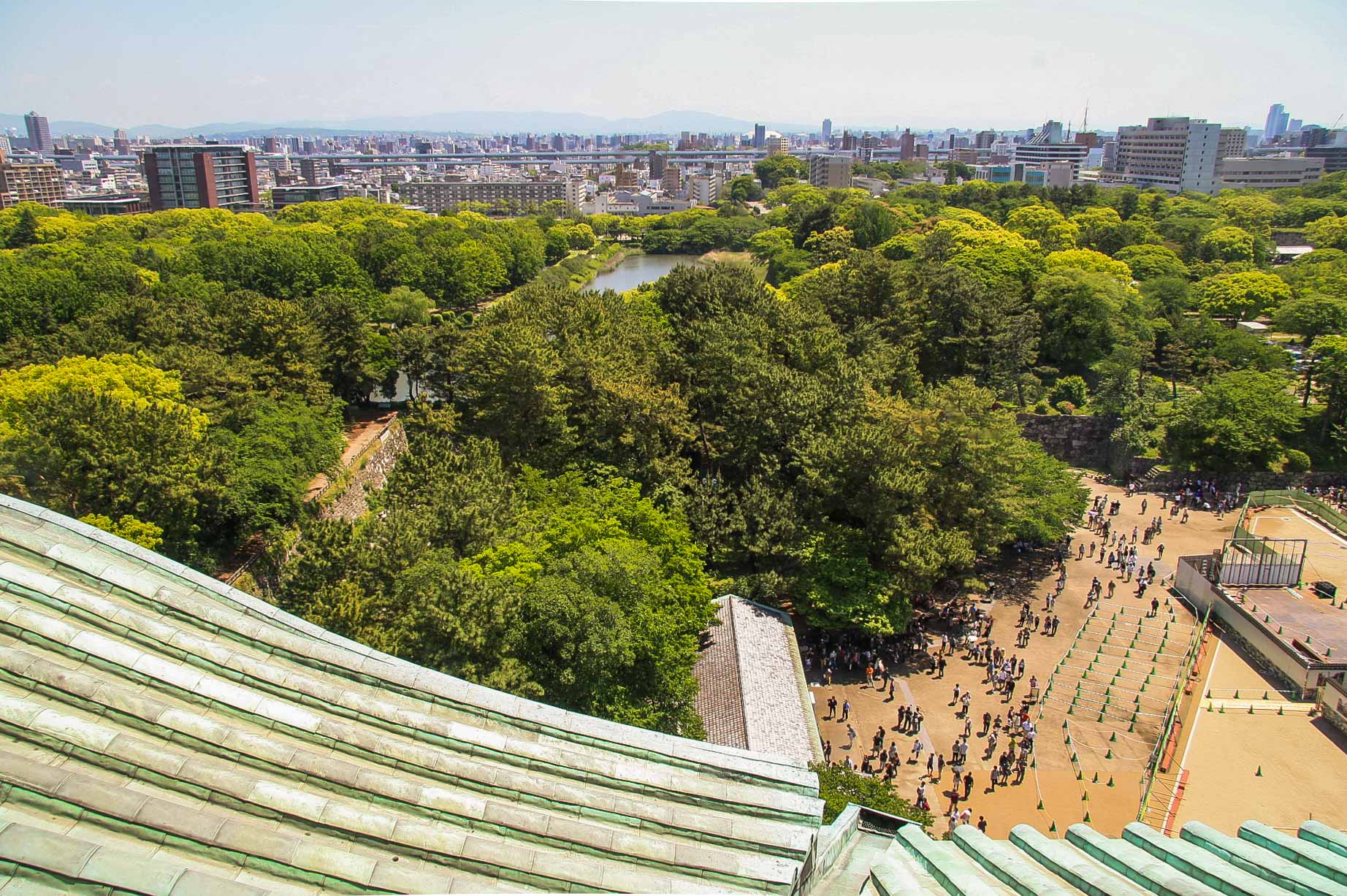 After the (very rushed) palace tour, we made our way to the main tower, which now serves as a museum. All seven floors are accessible, and the top offers a panoramic view of Nagoya and the castle grounds below.

On either end of the tower’s topmost roof, you’ll spot the Golden Dolphins. These twin statues, one male and one female, are actually representations of kinshachi, mythical creatures believed to possess the power to summon water.

The 18k gold statues were stolen three times over the Meiji period and then, ironically, succumbed to the flames of the 1945 fire.  The replicas were cast in Osaka in 1959 and restored to their position on the roof. Today, kinsachi are used as charms to prevent fire. (Yeah, I know.) 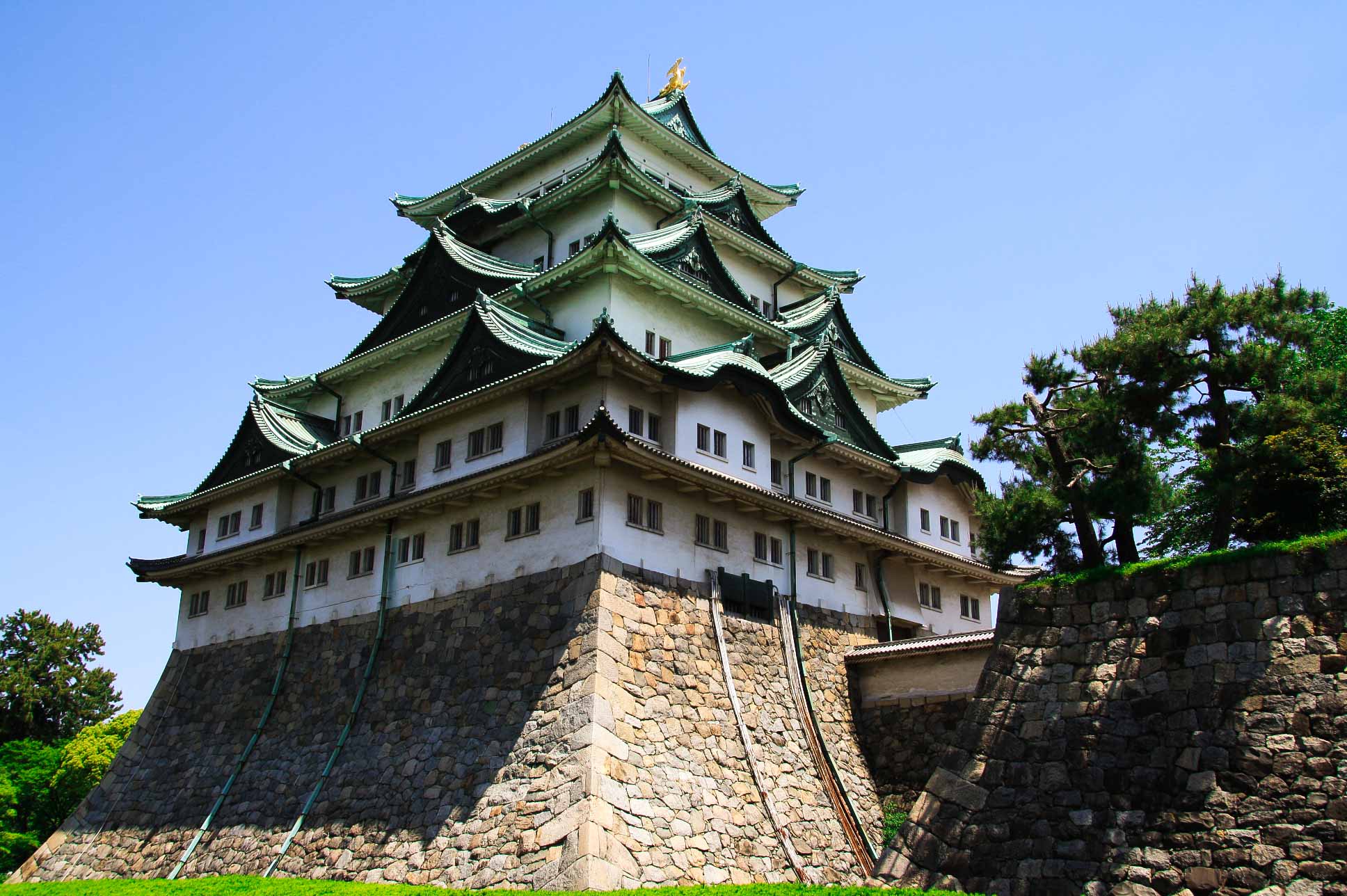 By the time we emerged from the inside of the castle’s main tower, it was lunchtime and the grounds were bustling with activity. We took a nice slow walk around the back of the castle and watched newlyweds pose for a wedding picture. Then I posed for a portrait and followed Mark to a line of stalls selling souvenirs and food on the walk back to the entrance.

We got a hot dog and a cold one and found a little table under the shade. As we sat sipping our beer looking out onto the beautiful castle gardens, I chuckled to myself. Godzilla missed out.