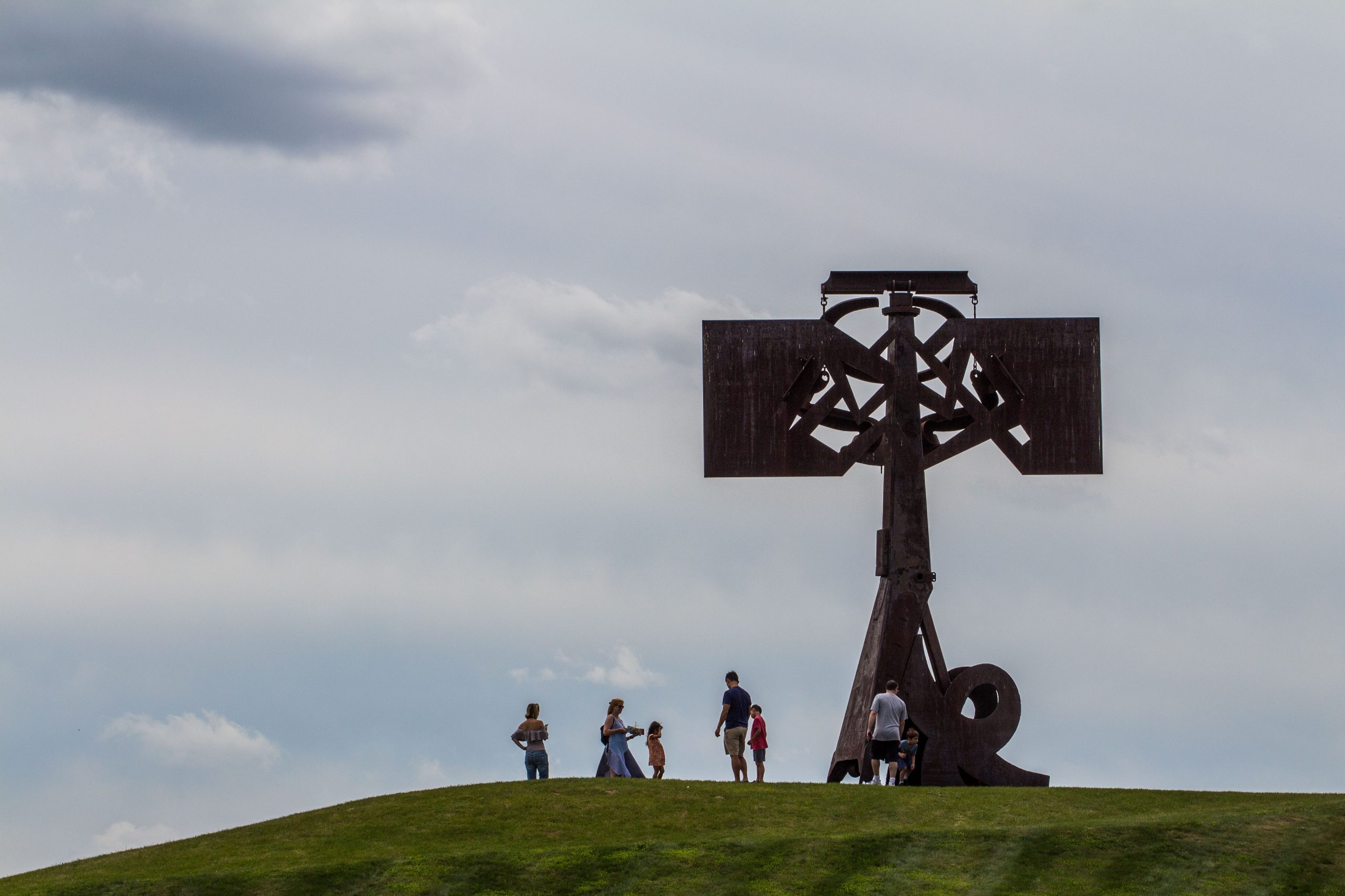 The first time I went to an outdoor sculpture park was in Japan. The exhibits were so creative and interactive, that I ended up visiting twice, despite it being a 2-hour drive away. So when Dani and Kyle suggested that we go see the one in upstate New York, I was really excited to check it out.

My first thought staring out onto the South Fields, though, was that it looked like something out of a scene from Arrival. The beams of Mark di Suvero’s industrial sculptures rise from the surrounding hills like futuristic crafts ready to beam up anyone who dared to get close. I wasn’t sure I liked how starkly the red and brown steel contrasted the soft grass and brush and, upon perusing the brochure, was disappointed to learn we couldn’t touch or climb on most of the exhibits.

But you need to stop comparing everything to Japan, I told myself, and besides, 100,000 annual visitors couldn’t be wrong…could they?

Located in the lower Hudson Valley, just an hour north of New York City, Storm King Art Center is considered one of the world’s leading sculpture parks. Bordered by its name sake mountain to the east and the Schunnemunk Mountain to the west, the 500-acre landscape includes farm fields, woodlands, wetlands, ponds, and streams and boasts more than 100 sculptures.

We decided to save the expansive walking paths of the South Fields for later, and headed up to Museum Hill instead. The formal garden surrounding the Museum Building is where the art center’s first 13 works, by sculptor David Smith, were displayed. This later motivated the collection and preservation of other sculpture by modern and contemporary artists, each placed directly in the landscape after careful consideration of its surroundings and distant views.

I could see this in Kenneth Snelson’s Free Ride Home, which is sited in a clearing of woodland. The metal tubes and knotted strings soar to the sky like the trees, seemingly mimicking their intertwining leaves and branches. I also liked Isamu Noguchi’s Momo Taro, a 40-ton granite split rock that resembles the peach of the Japanese folk tale. It’s one of the few sculptures that visitors can touch and enter, the hollow centre serving as a quiet for relaxation and contemplation.

The views from Museum Hill are some of the best in the park and there are plenty of places where you can take a moment to sit and enjoy them. The hill then descends into the North Woods, which houses smaller-scale works. Here you’ll find Day Game, a writhing twist of steel by David Stoltz and the Gazebo for Two Anarchists by Siah Armajani. The latter is dedicated to Alberto and Gabriella Antolini, two anarchists imprisoned for transporting explosives in the Youngstown Affair of 1918.

The standout piece, though, has to be Outlooks by Heather Hart, a special exhibition featuring a domestic rooftop activated by performances, discussions and events. The rooftop piece, known as the Oracle of Lacuna, is meant to represent the gaps in official, written histories of the Hudson Valley region.

I also enjoyed George Cutt’s Sea Change, which features two identical curving poles that turn together slowly in the opposite direction. It’s the only motorized sculpture in the park, powered by an underground line. The fluid movement of the sculpture is mesmerizing and one of the more thought-provoking pieces, I think. An experience deep sea diver, the artist was inspired by the motion of seaweed.

Walking away from the North Woods and into the Meadows, visitors will pass the Storm King Cade and two picnic areas. We decided to keep working up our appetites and continued on to Alexander Calder’s The Arch, which looks like a giant bird towering over the surrounding grasses and shrubs.

After close to three hours of walking, we found ourselves back in the South Fields, which is easily the biggest area of the park. We decided to walk for just an hour or so longer and save the rest of the sculptures for if ever we decided to come back. Mark di Suvero’s Mother Peace reminded me of a giant ship and Ronald Bladen’s geometric sculpture, Untitled (Three Elements), is the kind of optical illusion I was hoping to see more of at the center.

If I said I didn’t enjoy my time at Storm King, I’d be lying; the landscapes were breathtaking and there were sculptures that I really liked and thought interesting. I just wish it was more interactive. I know I’m supposed to be comparing less, but in the game of outdoor art parks, its Japan 1 – 0 USA.

America gets a shout out though for The Shops at Jones Farm, where we had a delicious lunch to the view of a very handsome and very shirtless young man riding a tractor.

Storm King Art Center is located 50 miles north of the George Washington Bridge and 8 miles south of Newburgh, NY. Admission is $18. Bicycles are available to rent; there is also a tram that runs though the park. For more information, click here.

Not sure I would get excited about visiting this, but just need to say that I think your photos are really cool. Lovely compositions.