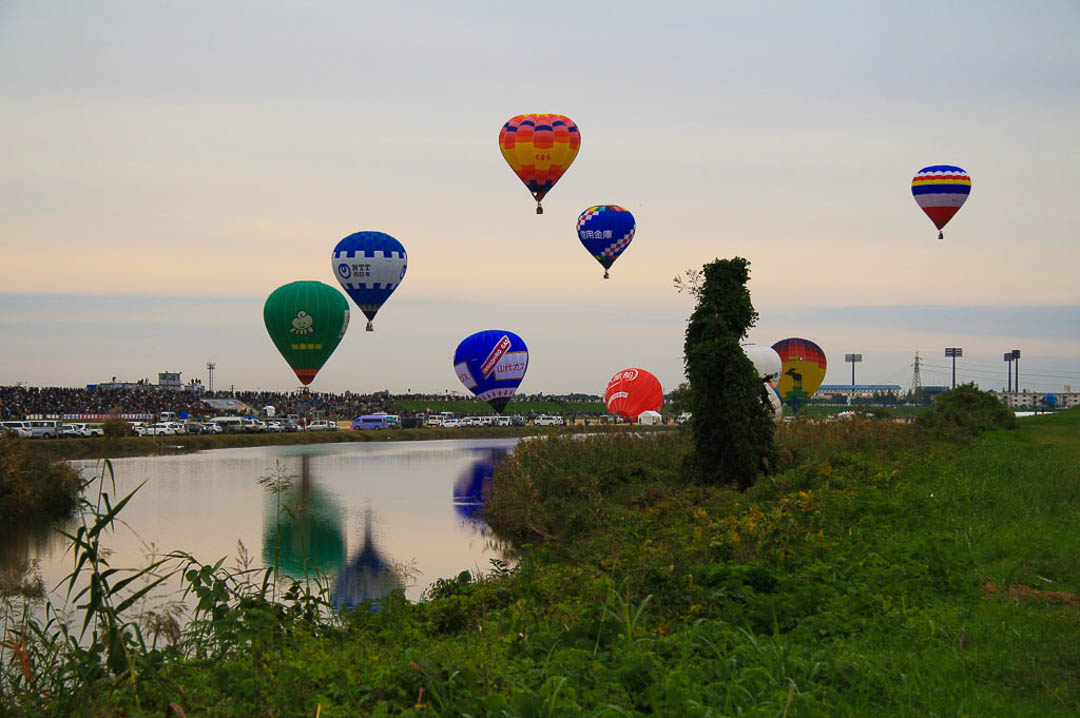 It was 06:43 in the morning and 8˚C (46˚F).  Mark and I had been stuck in a traffic jam for the past 40 minutes and had just watched the main launch  on day 4 of the Saga International Balloon Fiesta from my car. I was not impressed.

The week-long event held alongside the Kasegawa River just outside Saga City is one of the biggest of its kind in Asia, hosting 100 balloons from 15 countries and attracting close to 1 million visitors a year. There are two competitions held every day of the festival except the last, when there is just one in the morning. Participants attempt to fly as close as they can to specified targets, then drop sandbags to mark their position. The distance between the markers and the targets determines their score. The morning segment on 1 November began at 06:45. 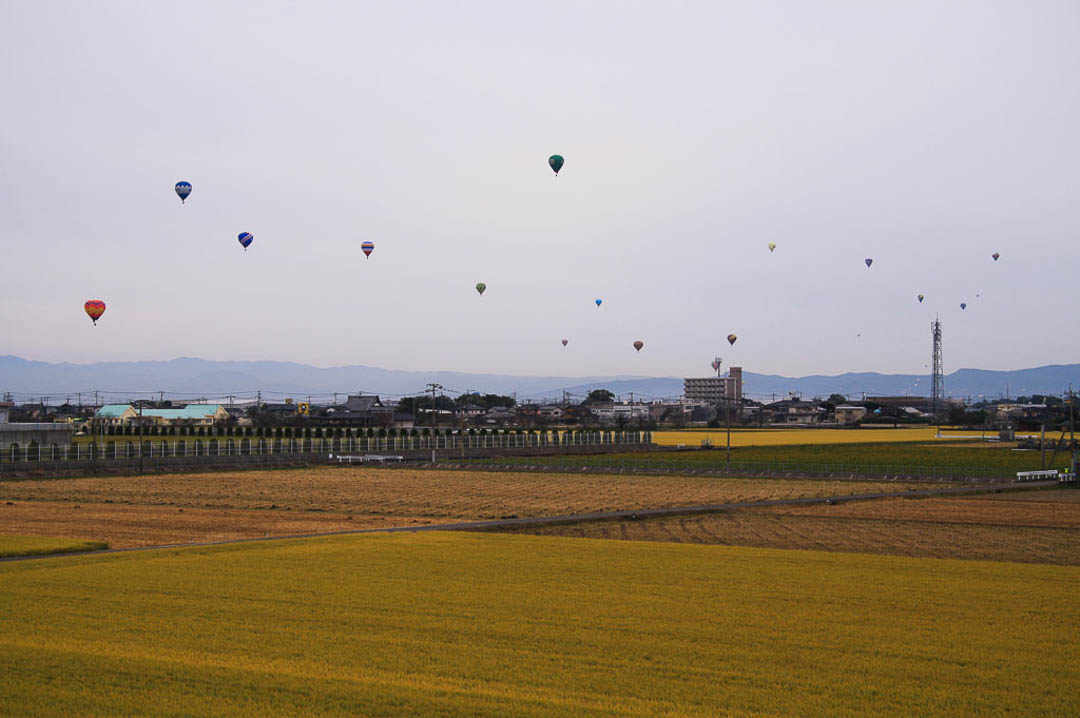 Our original plan was to drive up to Saga prefecture from Miyazaki on 3 November – it’s  a national holiday in Japan – but we decided on a whim to leave on Halloween instead. We capped the 212 km (131 mi) drive after 4 hours at an A-Z Hotel just outside of Karume, Fukuoka. But our 5AM wake-up call the following morning to grab breakfast and drive the remaining 40 minutes wasn’t early enough, apparently.

Now in it’s 35th year, you’d think the festival would have the parking situation down. Indeed, there are a dozen designated spots surrounding the main launch site, but most of them were already full by the time we arrived (45 minutes early!), which was causing the gridlock and making the others impossible to get to. 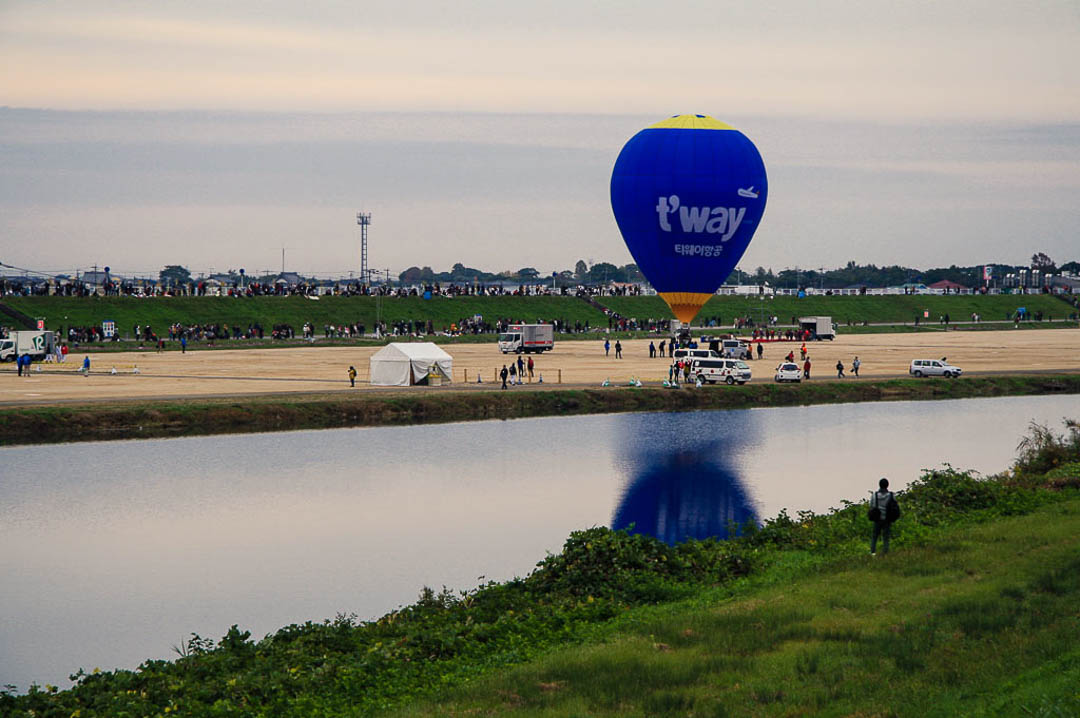 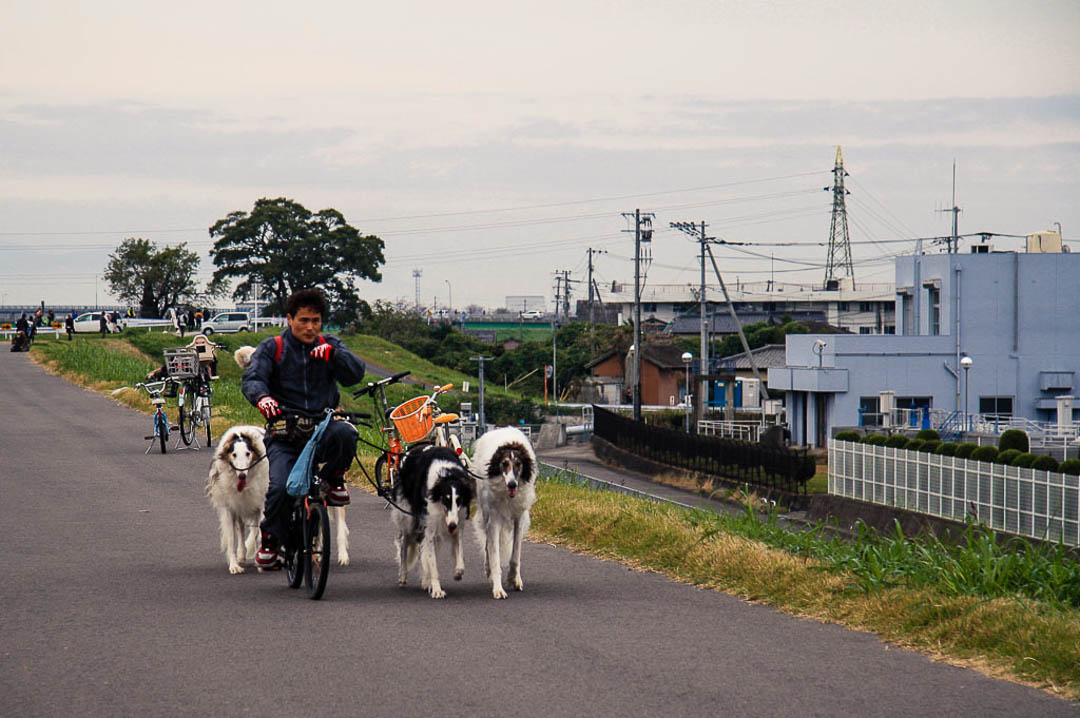 At least the view was nice. Bordered by Fukuoka and Kumamoto to the east and Nagasaki to the west, Kyushu’s smallest prefecture is two-thirds agricultural and forested lands. Outside it’s two biggest cities, Saga and Karatsu, it’s mostly rural, making its stretching plains the perfect venue for a hot-air balloon competition.

In it’s first year, in 1978, the festival was a small ballooning event in Amagi City, Fukuoka known as the Balloon Fiesta in Kyushu. Two years later, it moved to the outskirts of Saga where there was more space (read: where there was nothing else going on) and in 1985, became an international competition and was given its present name. Since then, it has continued to grow from year to year and has attracted almost 650 international participants. 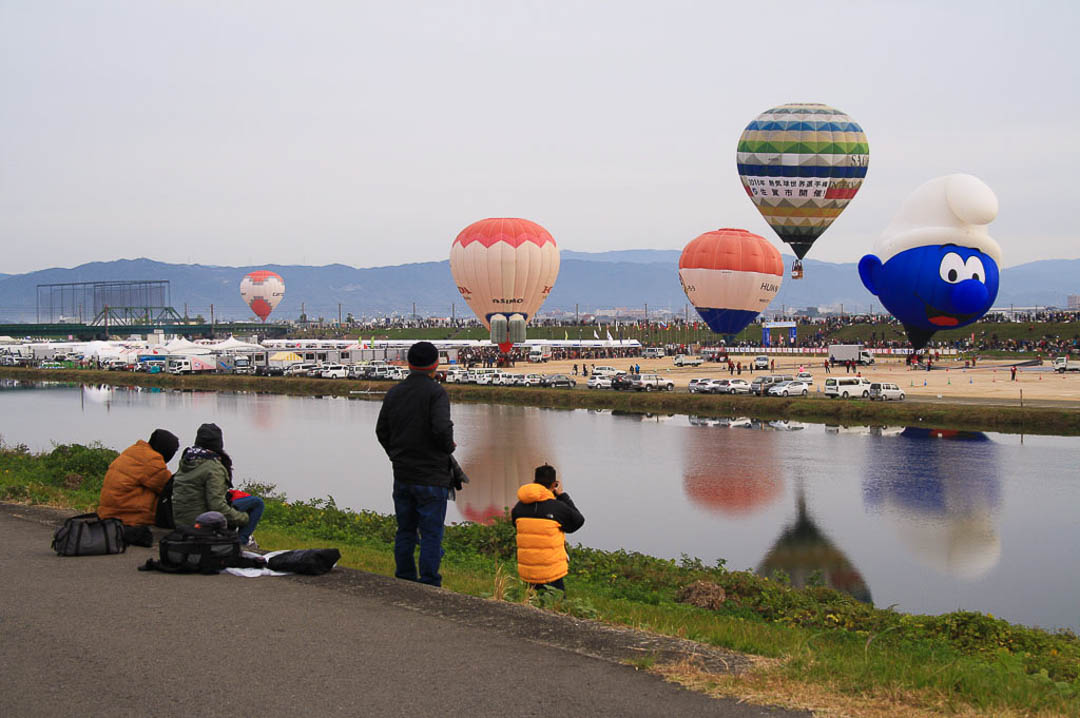 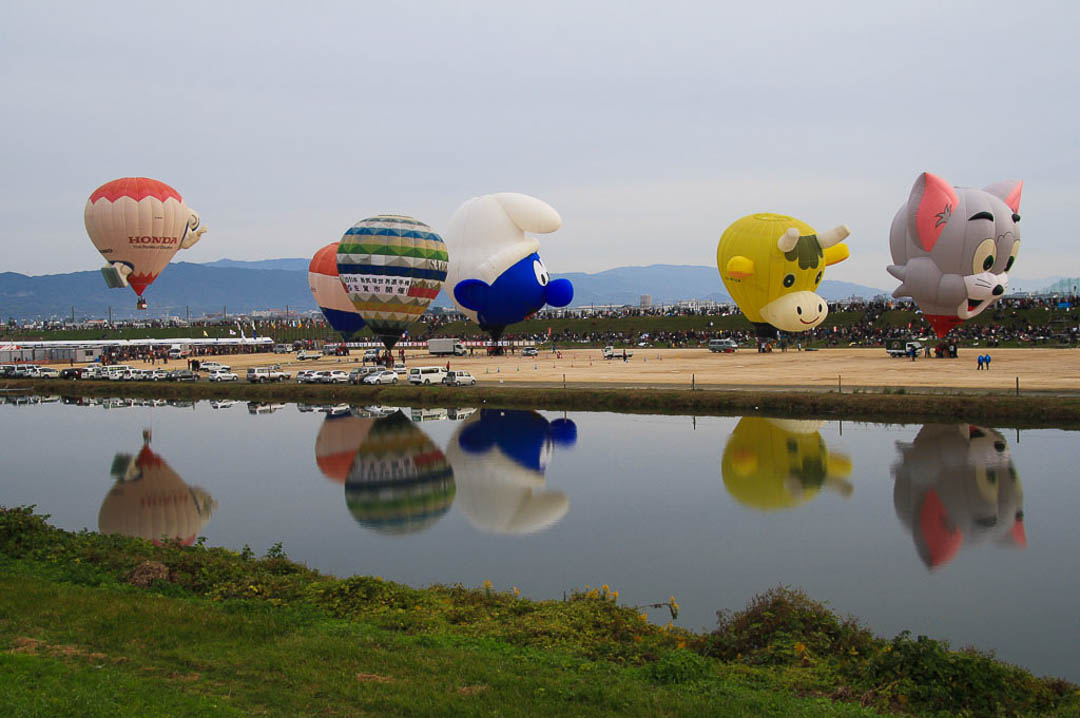 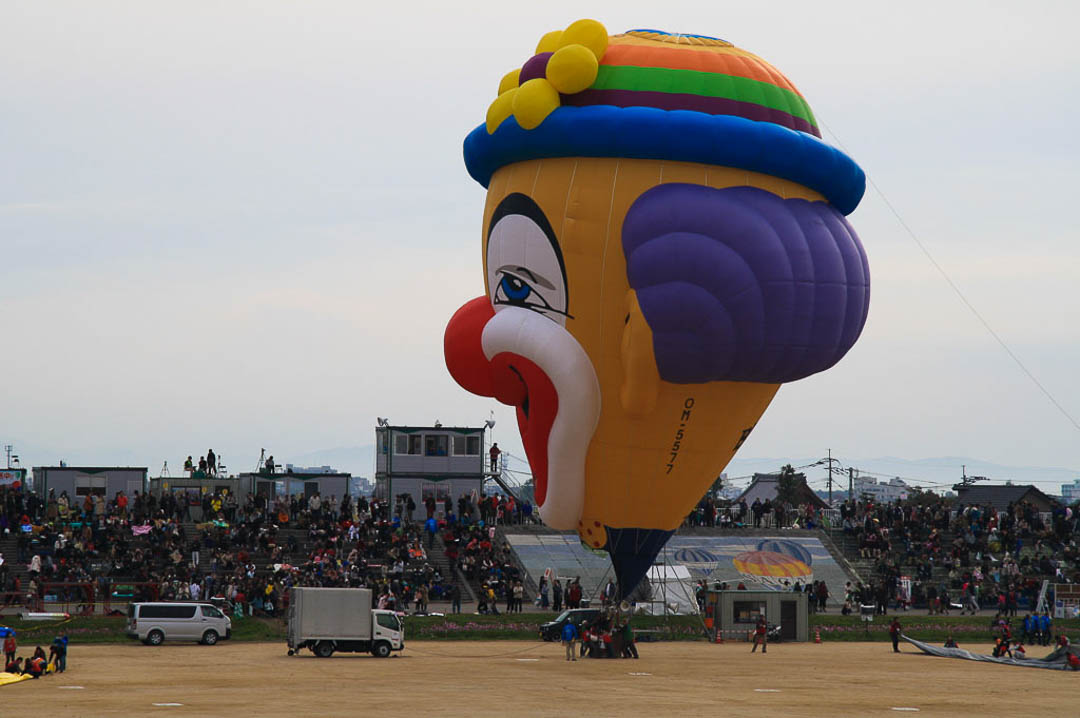 Tap, tap, tap. I drummed my fingers on the steering wheel in frustration. “If we were in Jo’burg, people wouldn’t stand for this shit,” I grumbled. “They’d be driving through these fields with their 4x4s and claiming their own parking spaces.”

We’re also not morning people – can you tell?

I pulled out of the long line of cars and drove off in a huff.

As it turns out, Mzansi mentality does exist in Japan. Just then, we spotted a handmade sign tied to a street pole. PARKING. I pulled in to the private yard of a car shop and joined the 30 other rebels who had had enough of waiting. We paid its smiling entrepreneurs 1,000円 (R116 / $8 /€8.50) for the pleasure, squeezed in between another kei car and a loading truck and walked the rest of the way down to the riverbed. 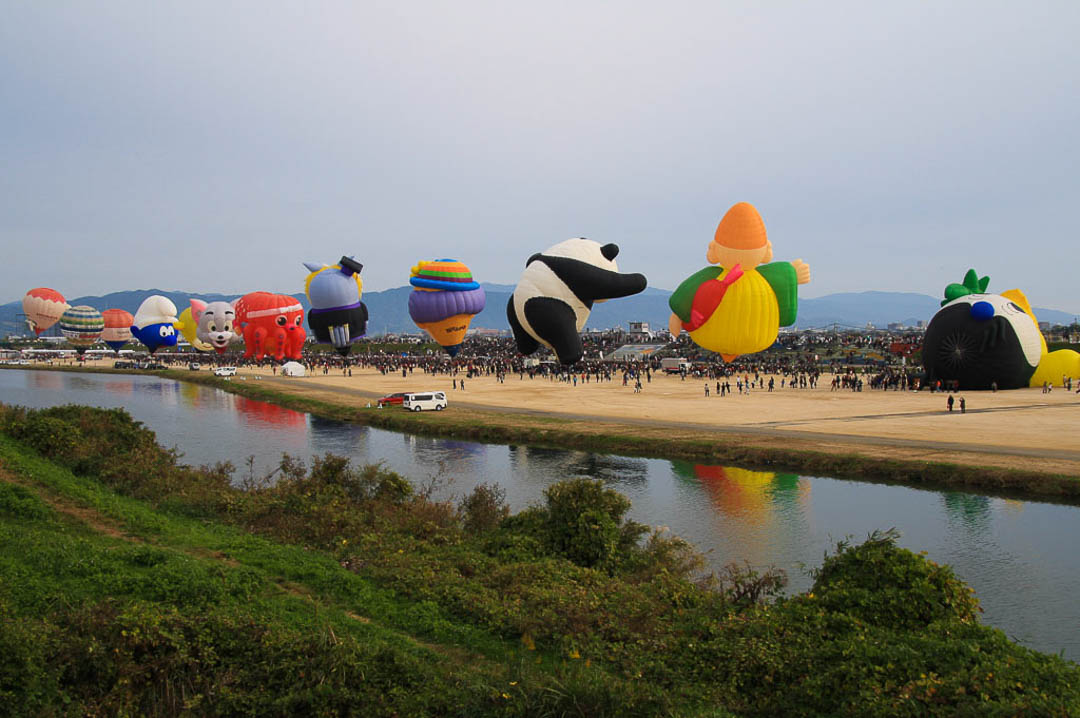 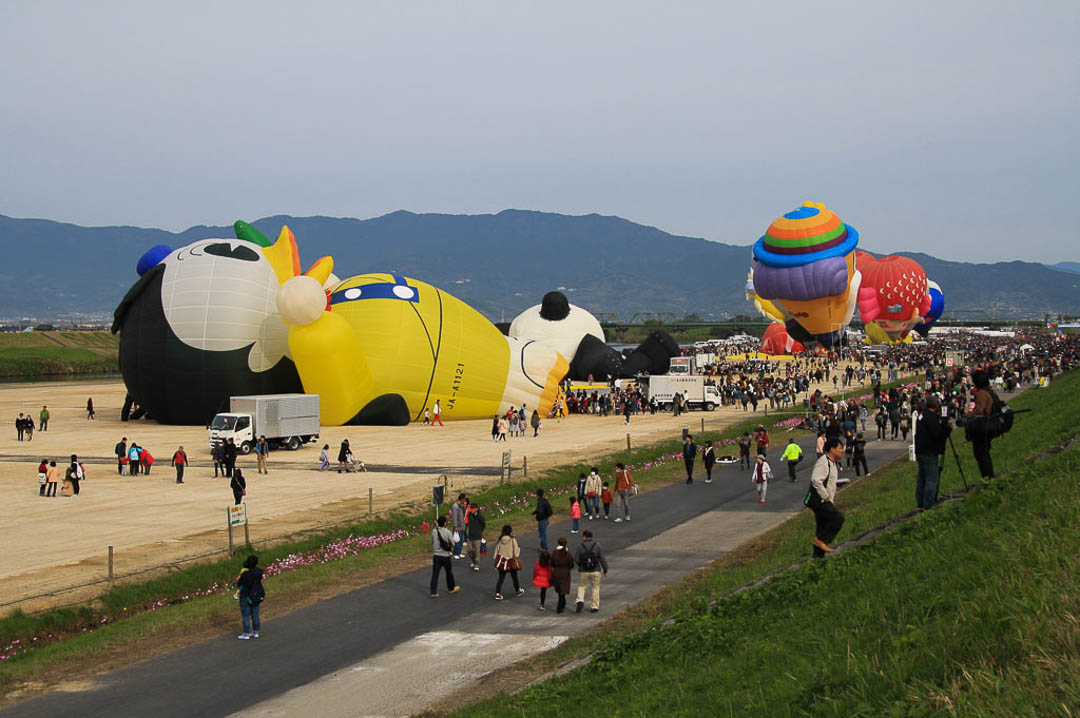 “…Number 68-ate-ate-ate. Have a nice flight-ight-ight-ight.” A woman’s voice echoed over the loudspeaker. I pulled my leather jacket closer to my chest; it was barely enough to keep the icy wind from creeping up the back of my t-shirt.

Seventy-six competitors entered this year. By the time we got to the site, there were only a handful of balloons left waiting to launch. I wasn’t going to get the photo I wanted of a sky full of balloons; most were just dots on the horizon now.

By 09:00, the last balloon had left. On the other side of the river, it looked like more balloons were going to be blown up so we decided to stick around in the cold and wait. Sure enough, one by one the giant blankets of colour took shape: first Tom, from Tom and Jerry, then a fish, and a giraffe and an octopus. 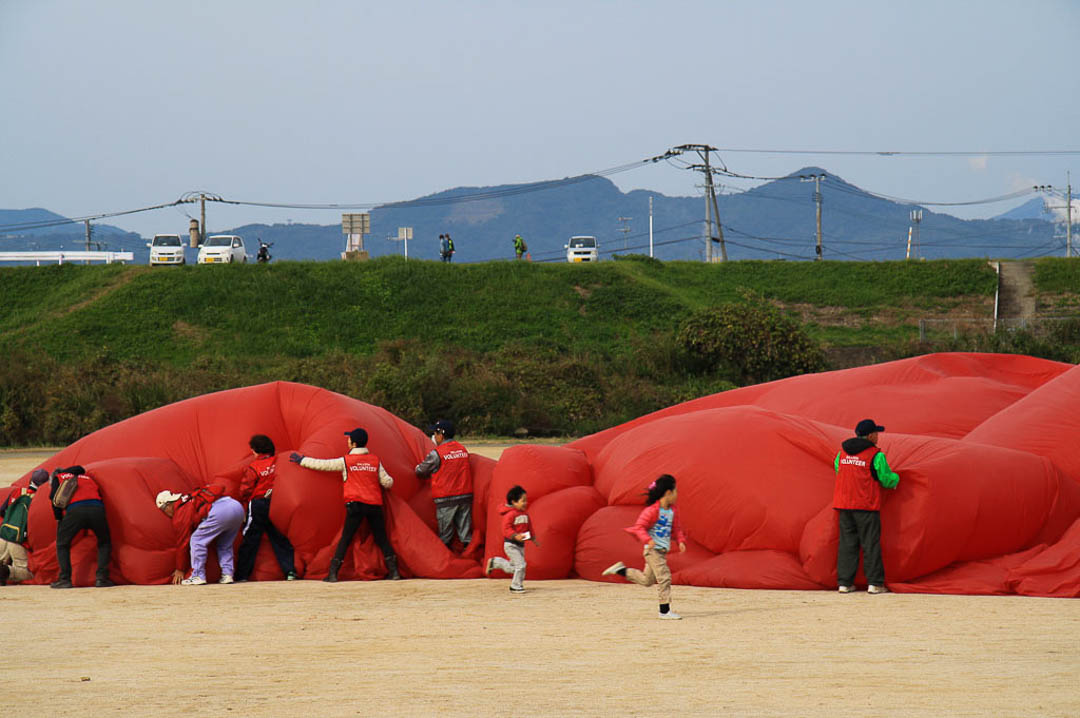 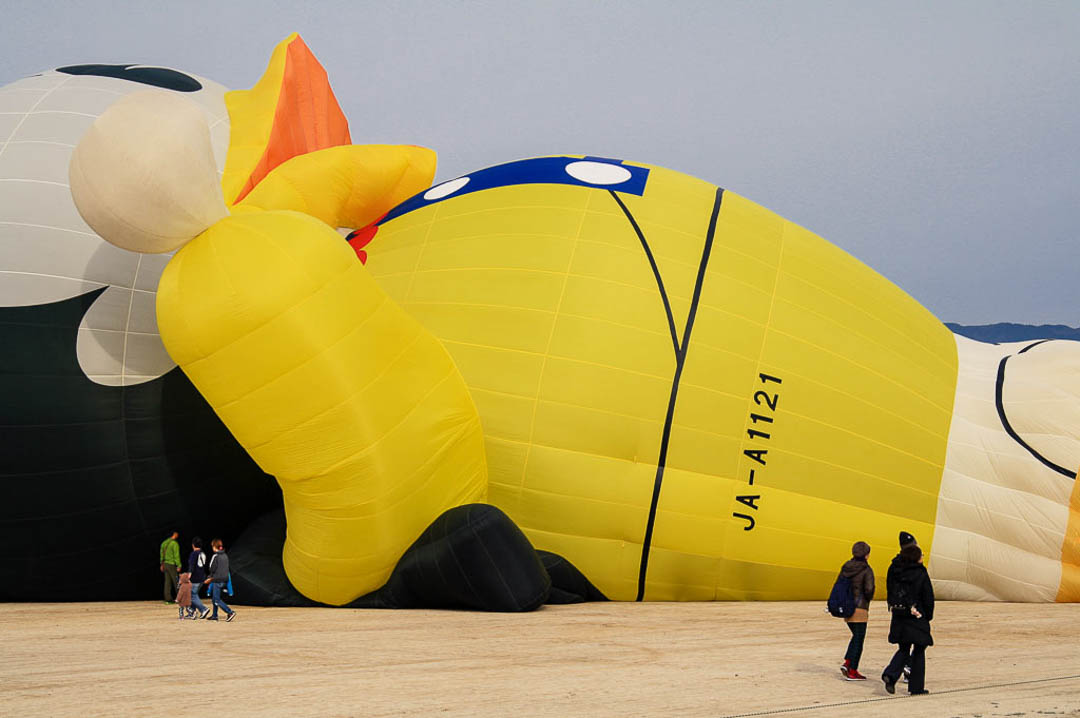 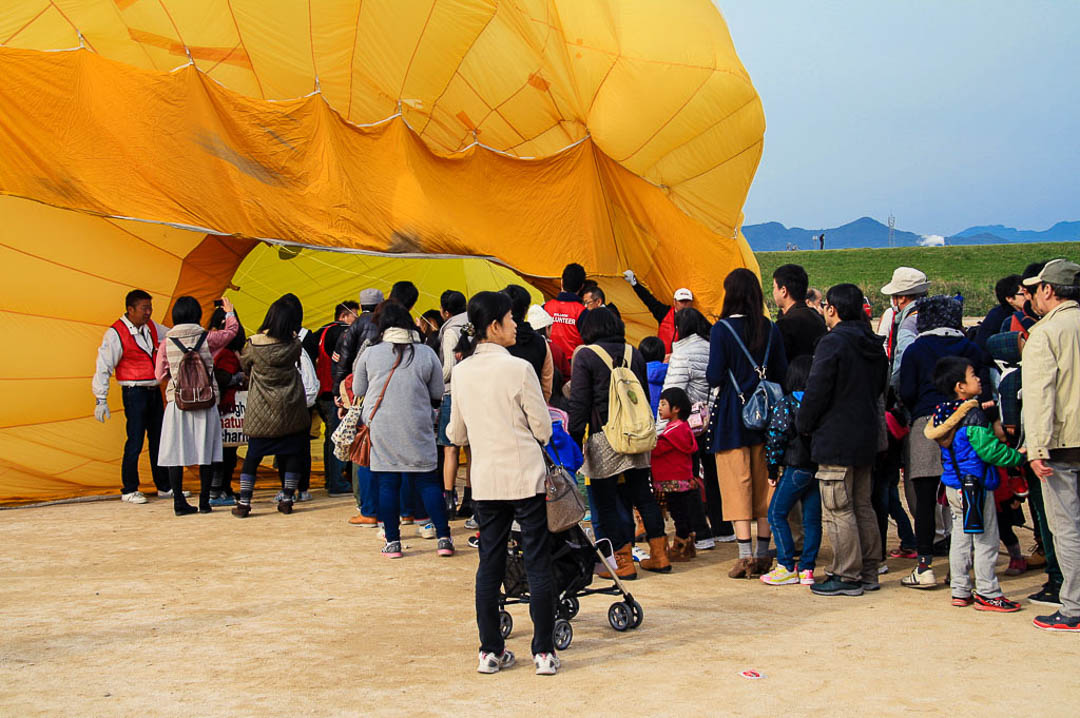 For some reason, we assumed that the balloons being blown up would take off just like the others had. We were wrong: the giant, floating characters are part of showcase called Balloon Fantasia. Visitors are allowed to enter the launch site and view the hot-air balloons up close.

It took us a while to realise that the balloons were just tethered for the audience’s perusal, and then it still took us 15 minutes to walk down to the bridge and cross over to the other side of the river. When our sneakers touched the grass, volunteers were already deflating the giants and folding them up.

“What was the point of that?” Mark asked incredulously. “They go to all this effort to set them up…you’d think they’d keep them around for longer than 5 minutes.”

Sigh. It just wasn’t turning out to be our day. 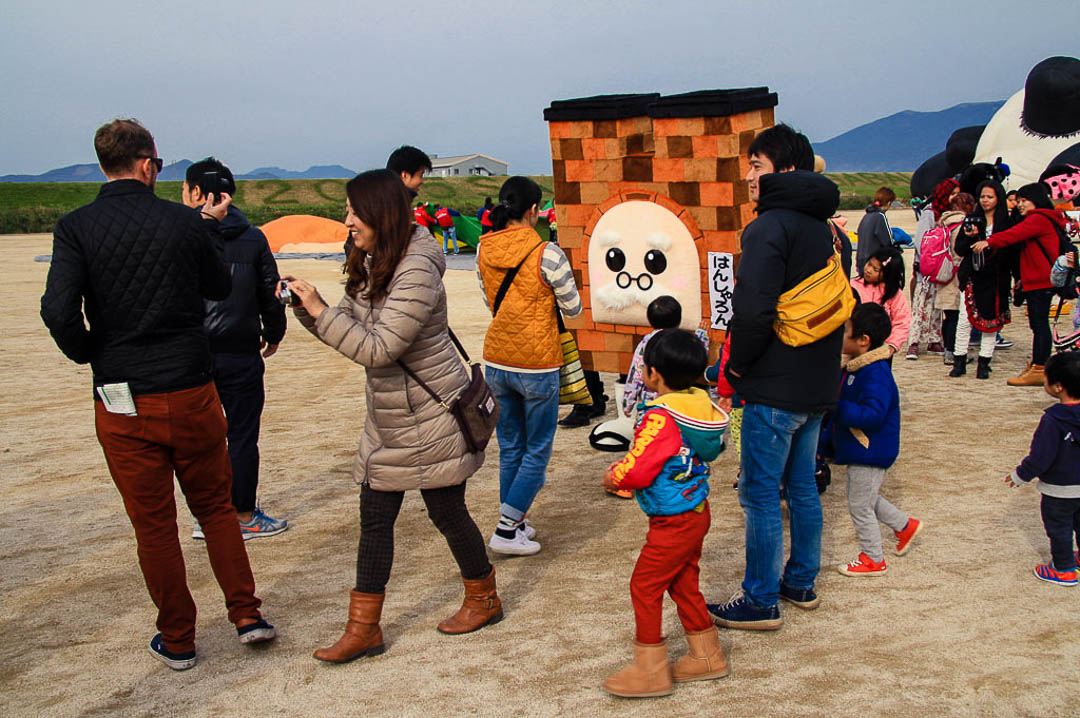 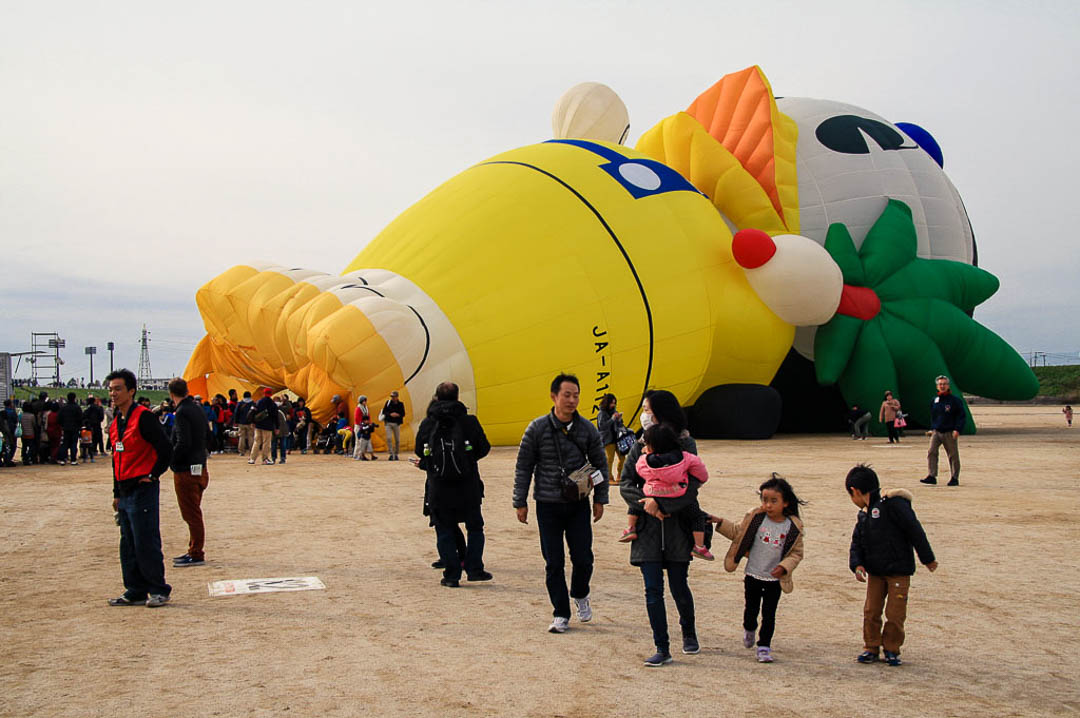 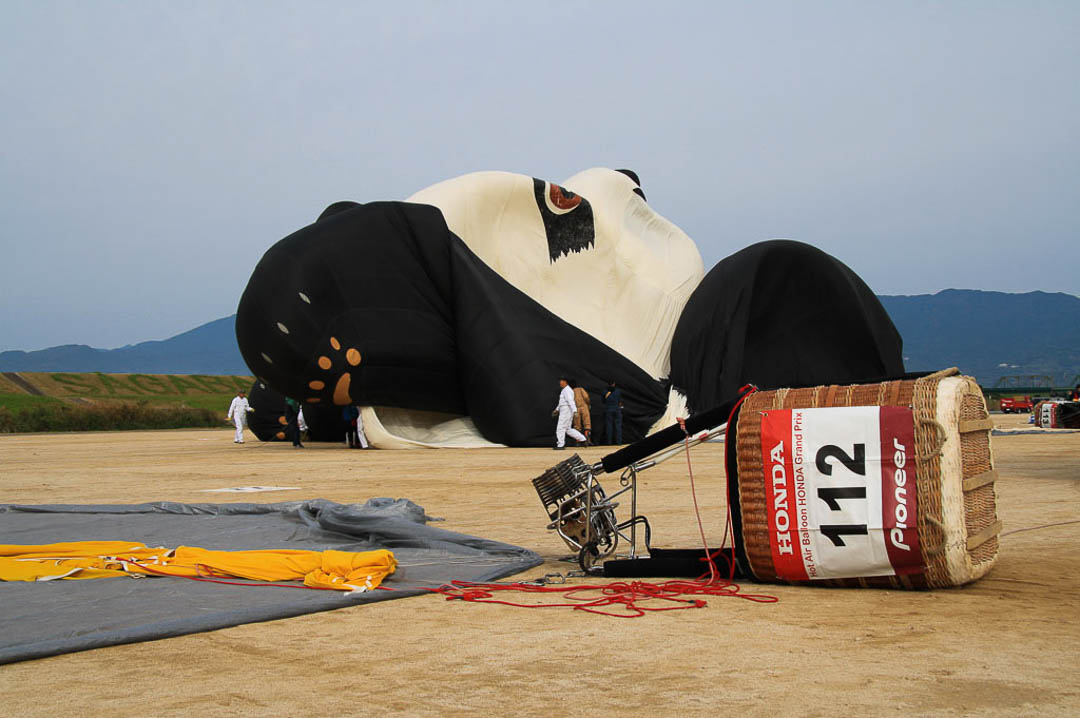 We could have walked around the many tents on the festival grounds, filled with information booths, souvenir stalls and food counters. But there were crowds of people, too many screaming children, and not enough patience in my temperament.

There would be a Honda bike show and a balloon workshop to tie the audience over until the afternoon competition was to begin at 14:45. On the last two nights of the festival there is also the La Montgolfier Nocturne event, in which several balloons are illuminate by burners to the beat of live music. Neither of us could hang around until then, though – we both had work in the morning and another 4.5 hour drive ahead of us. 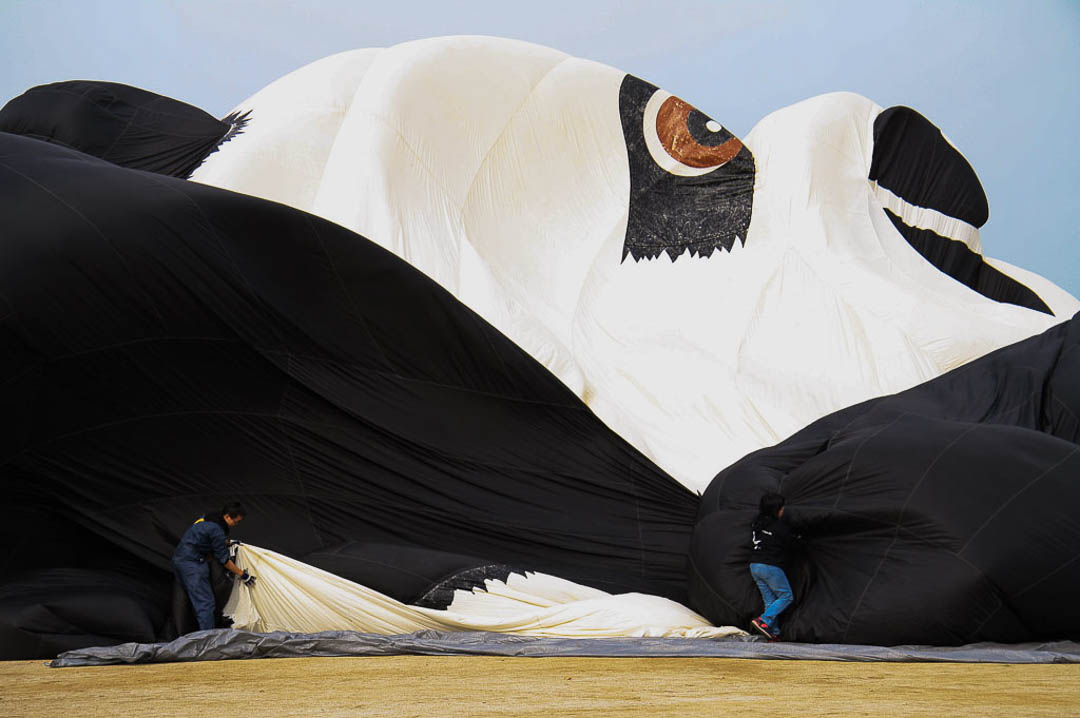 After a quick Google search turned up less than exciting results for other things to do in the area, we decided to give up and leave.

Nevertheless, I got to see hot air balloons up close for the first time ever (they’re freaking huge!), and there was a panda. So there’s that. 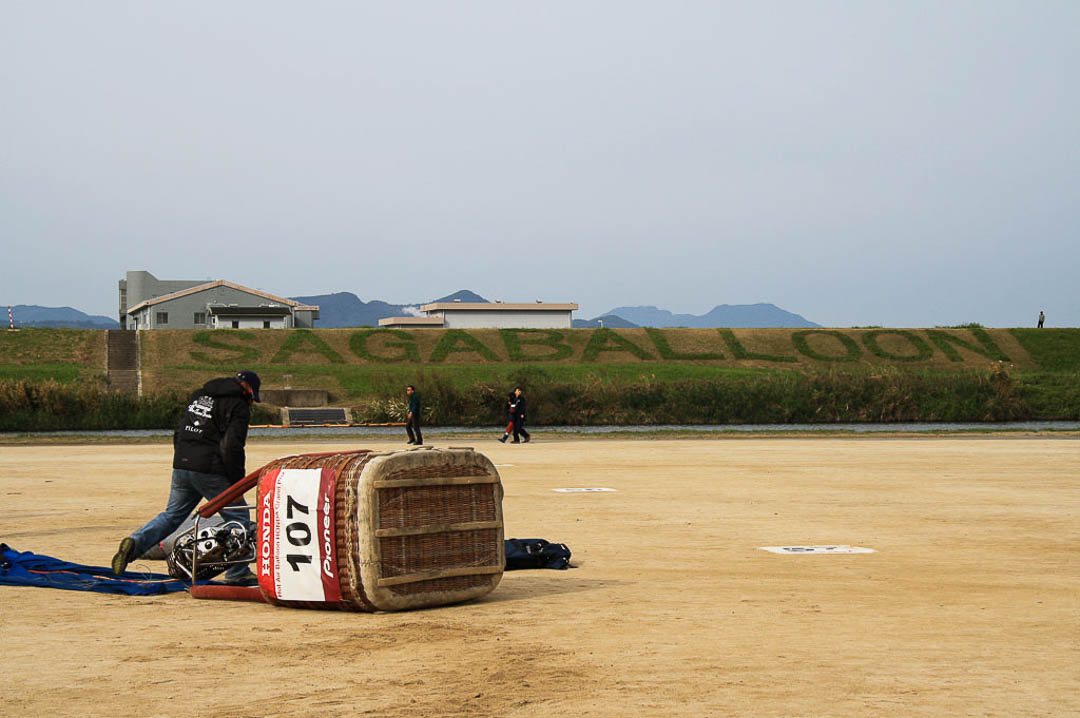