Having your own little Kei in the inaka of Japan is gold – they’re cheap, easy on petrol and, like all cars, you can jump in on a whim and go wherever the road takes you. The downside? They aren’t really built for frequent, long road trips. This, I was reminded of as I opened my eyes and let them slowly adjust through the polka-dotted window onto a grey, misty parking lot. “Where are we? What’s wrong?” I asked, looking around trying to get my bearings. Mark laughed nervously, “The engine’s overheated.”

I had been taking my role of backseat passenger (read: napper) very seriously, while Mark drove and Ken navigated us to Fukuoka. Our first stop was supposed to be Nanzoin Temple in Sasaguri Town, just outside of Hakata. But now it looked like we might not make it. When we stopped again at a petrol station further up the road, the attendants agreed that  something was very wrong. “There’s a car shop off the next exit.”

The Honda service station was in a place called Asakura, 50 min from the temple. The mechanic confirmed our worst fears: the engine was, essentially, fucked.

“It will cost…much money to fix,” Ken said carefully.
“いくら です?” Mark asked.
“十万”
“How much!?”
“One hundred thousand,” I confirmed.
Mark took out his phone and punched it into the calculator.
“This much!?” he showed Ken.
Ken nodded, “And we shouldn’t drive it on the highway.”

Thank the Germans for rental cars.

We got to Nanzoin Temple (南蔵院) at 3 o’clock, which, luckily for us, is open 24 hours a day (reception and shops 09:00-17:00). Its completely free to walk the grounds of the temple complex, which is just a short train ride from Fukuoka City. Despite this, Nanzoin and it’s giant, reclining Buddha, remain largely unknown to tourists. It’s a shame, because it’s truly a beautiful place.

The Nehanzo Buddha is big – not Ushiku Buddha in Ibaraki big, but still big. Imagine Lady Liberty on her side – they’re pretty much the same size. The pose symbolizes Buddha’s death and entry into Nirvana and although it’s the first time I’ve seen it, I think it’s my favourite. 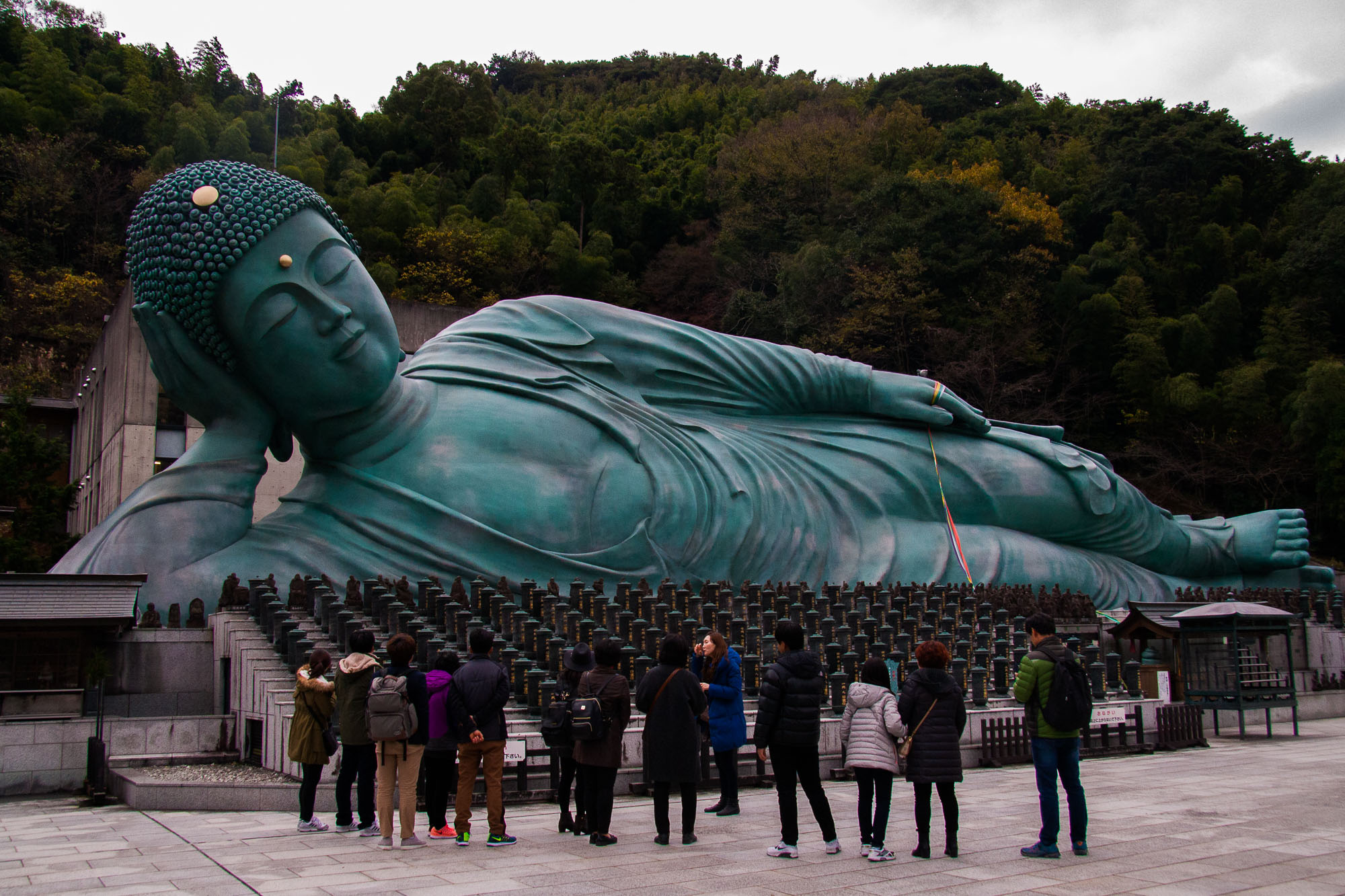 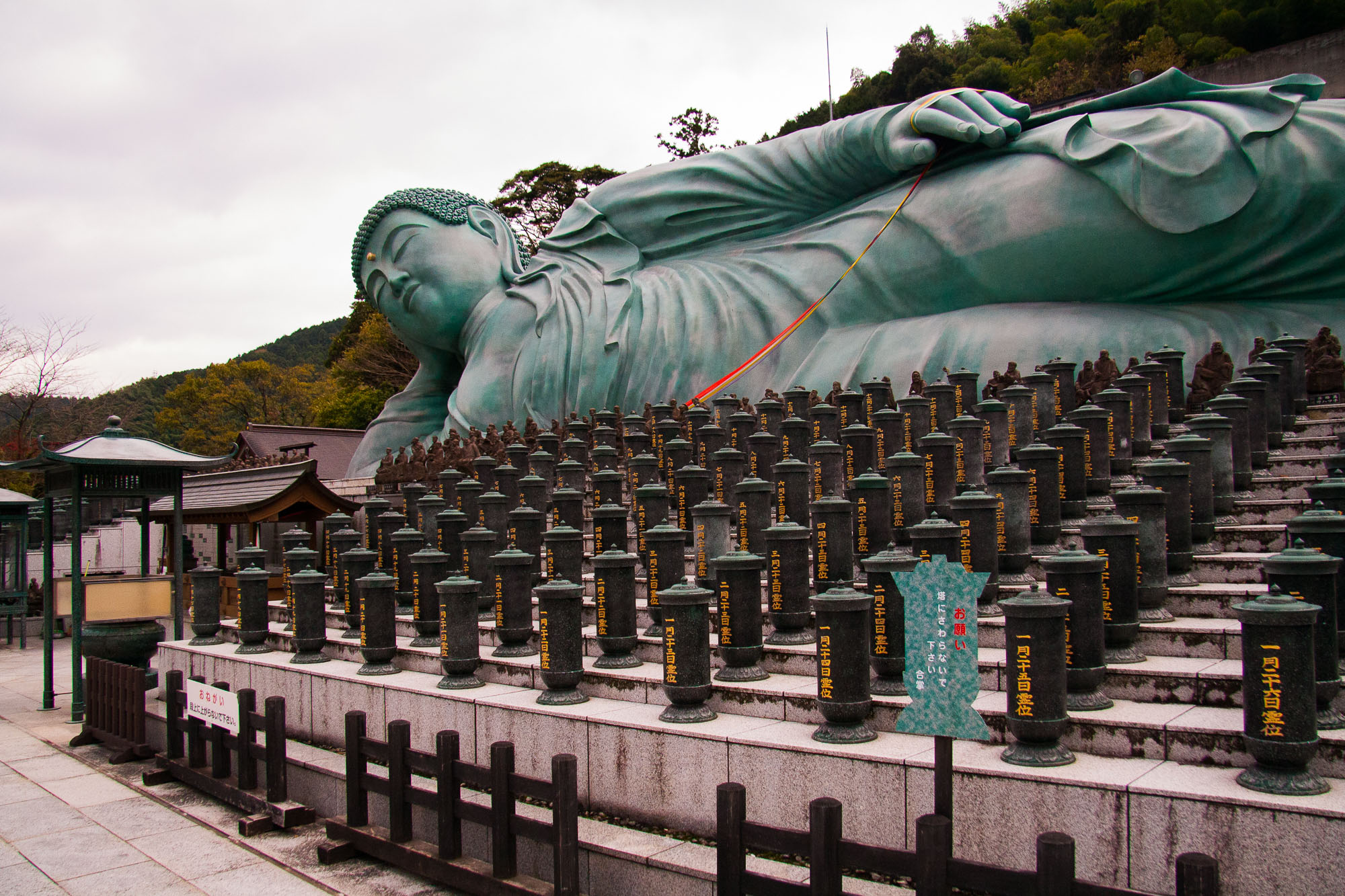 According to the brochure, the 11 m (36 ft) high, 41 m (134.5 ft), 300 ton daibutsu is “the most biggest bronze statue in the world.” It’s a claim that’s difficult to confirm – there is next to no information about it anywhere on the web, which is surprising for such an important title. After some research, however, I think it’s safe to say Nehanzo is the biggest reclining bronze Buddha in the world.

Not that it needs superlatives to impress. You can get close enough to touch the statue via a 360° loop around its base and inspecting its features, especially its gold decorated feet, up close makes for a unique experience. 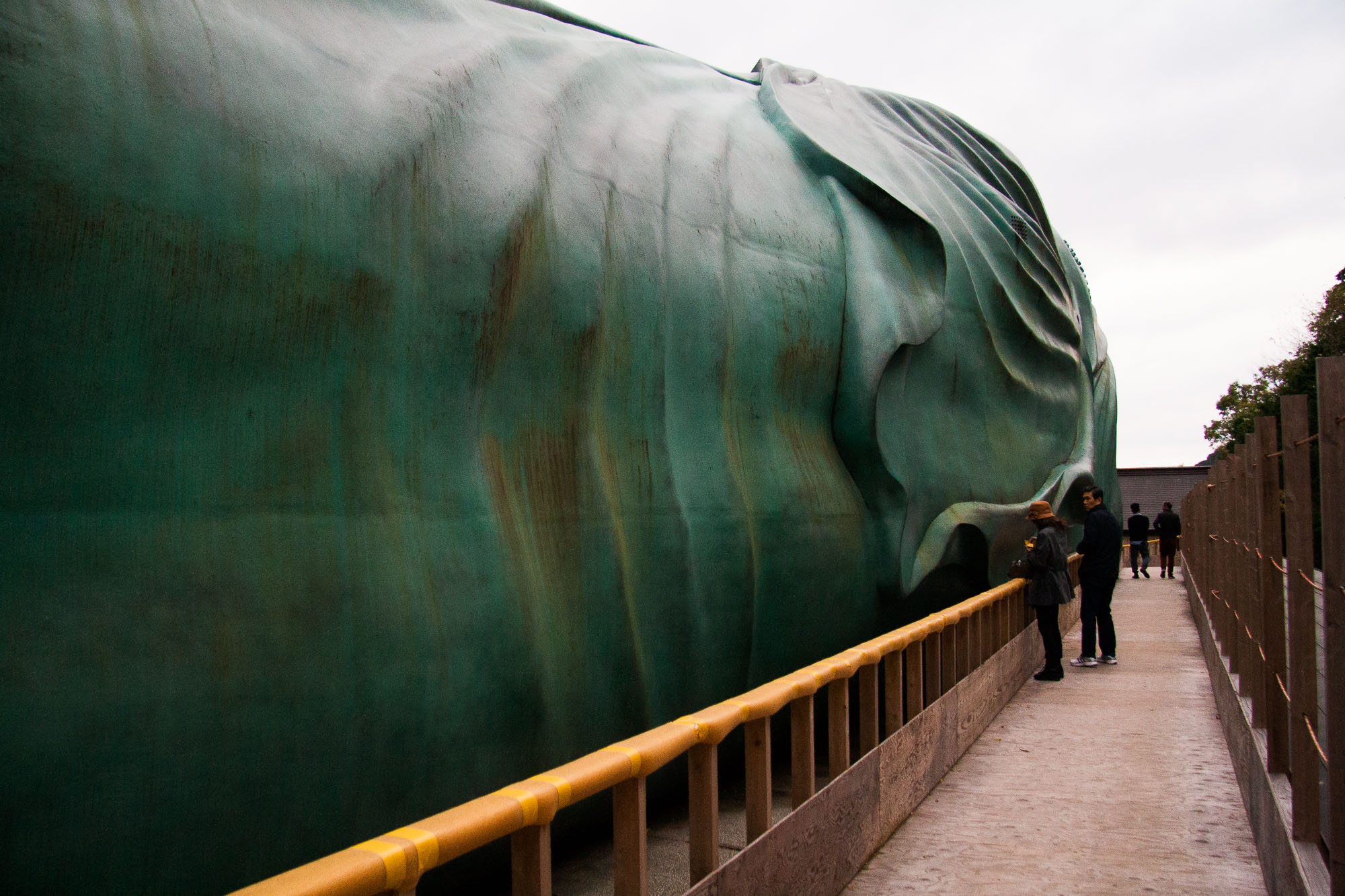 You can even go inside for a small fee (500円 / $4 / R61 / €3.70), something I would highly recommend. At the entrance, we were given ema boards and asked to write down our wish for life. Inside, at the top of a twisting staircase, a small window in the prayer room looks onto the enshrined ashes of Gautama Buddha. We laid our ema boards on a small tray in front of the window.

Nanzoin was first established at Mt. Koya as a special head temple for the Koyasan Shingon sect of Buddhism, in Wakayama prefecture (to the south of Osaka). It was moved to Sasaguri, Fukuoka in 1886 as a compromise between government and the local people, who had petitioned against it being destroyed under the anti-Buddhism policy. The reclining Buddha was built to house the sacred ashes, a gift from the Sixth Buddhist Council to thank Nanzoin for its contributions of medical supplies to children in Myanmar and Nepal.

The rest of the complex comprises of dozens of chapels and shrines. There is an impressive-sized Fudo Myo-o (不動明王) statue – one of the important deities in Buddhism – and below it, 500 more representing the Buddha’s disciples. 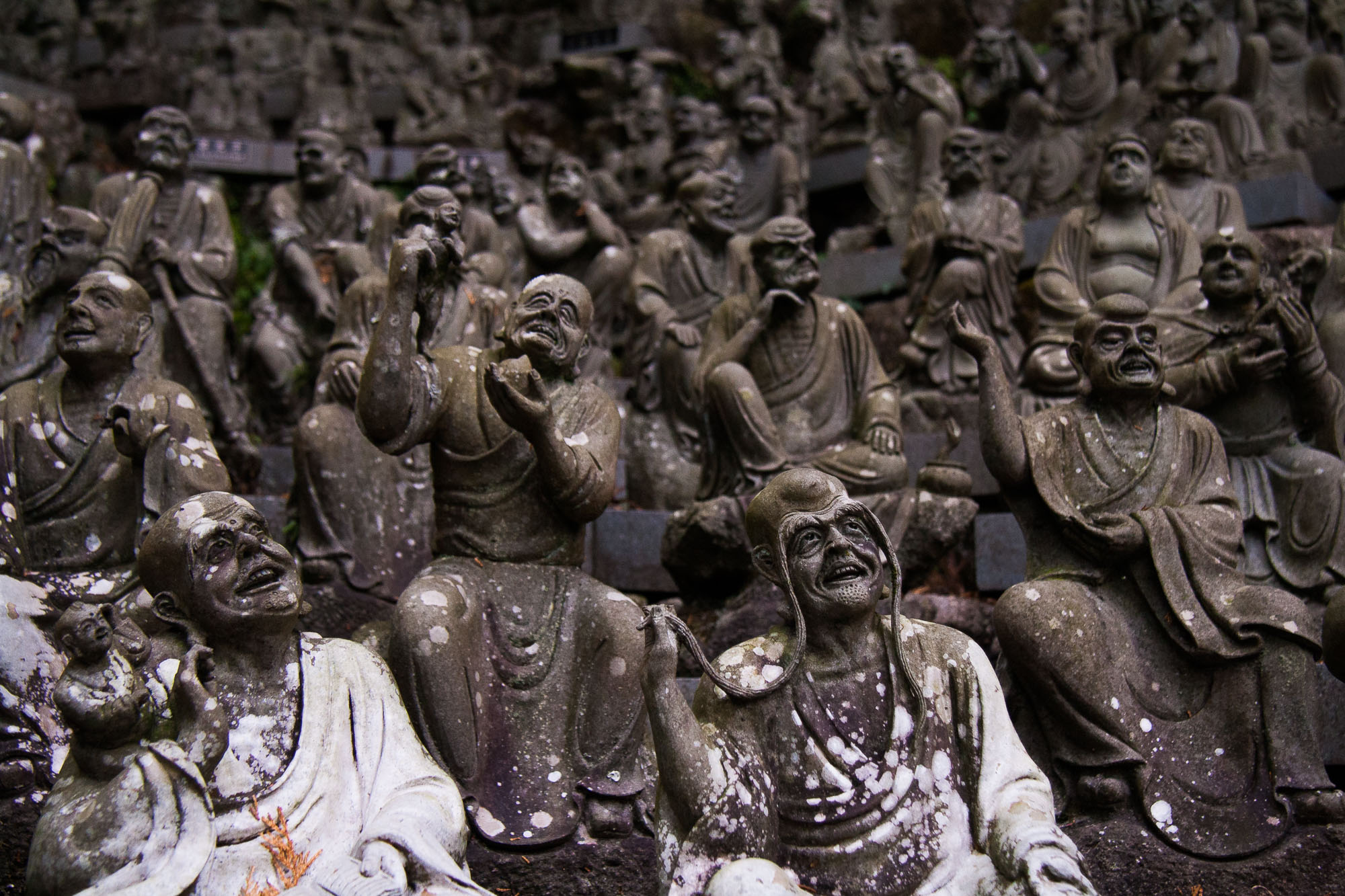 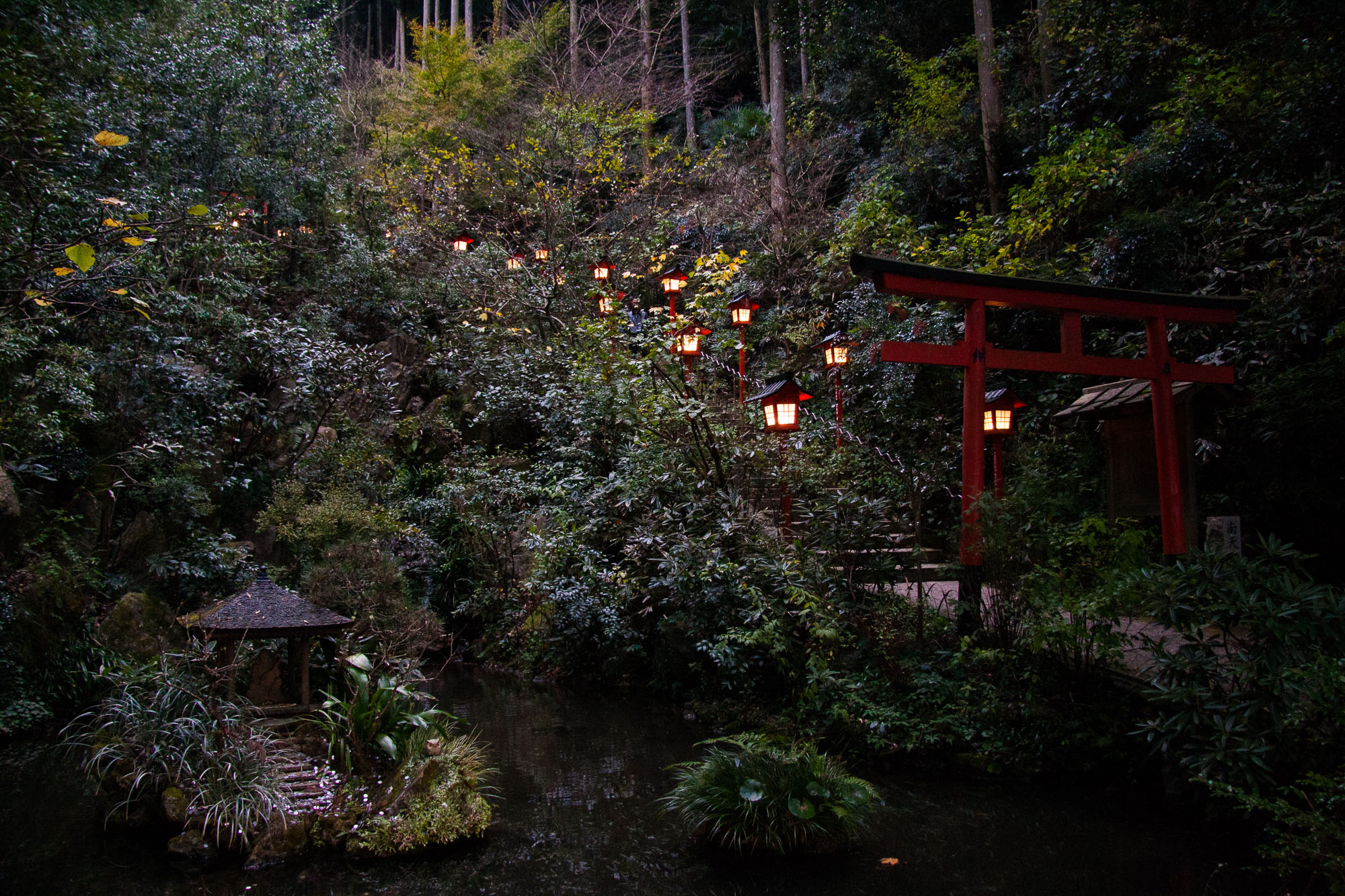 Inside a tunnel that leads to the reclining Buddha, there is another shrine, dedicated to the shichifukujin (七福神), or the seven lucky gods of Japan. It is said that the chief priest of the temple won millions of yen in the lottery and wanted to share his good fortune with many people.

Over a million visitors come to the temple each year to complete a miniature version of the 88-temple pilgrimage through Shikoku. On the base of the Buddha, there is hallowed ground which is filled with sand from all of these temples.

It was almost dark by the time we were ready to leave. The visit had left me feeling in awe and yet completely at peace. Ken and I flicked each ‘key’ on the railing of the “Melody Bridge” as we followed Mark across to the car. It’s secret song put a period to the end of a long day. 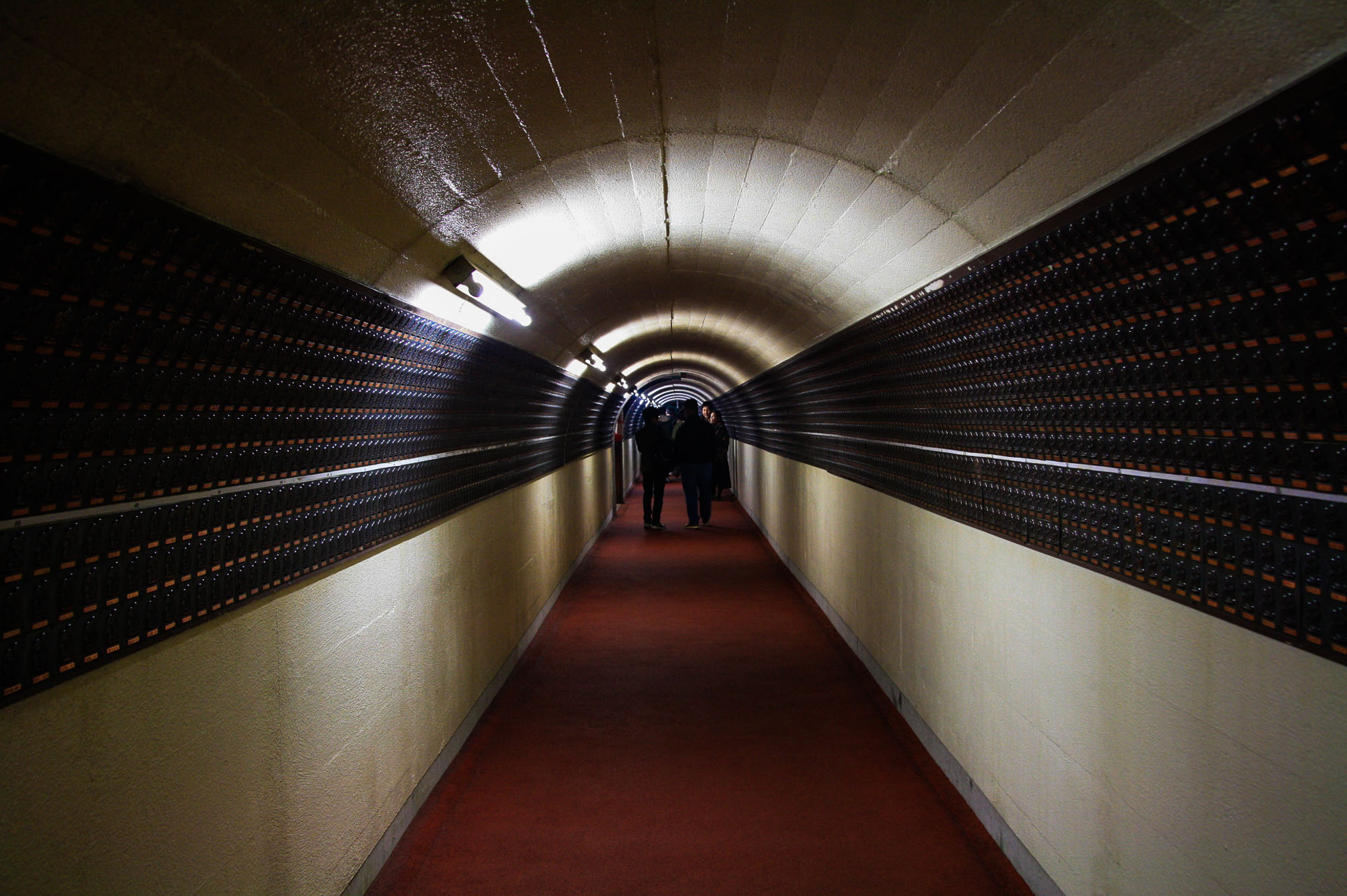 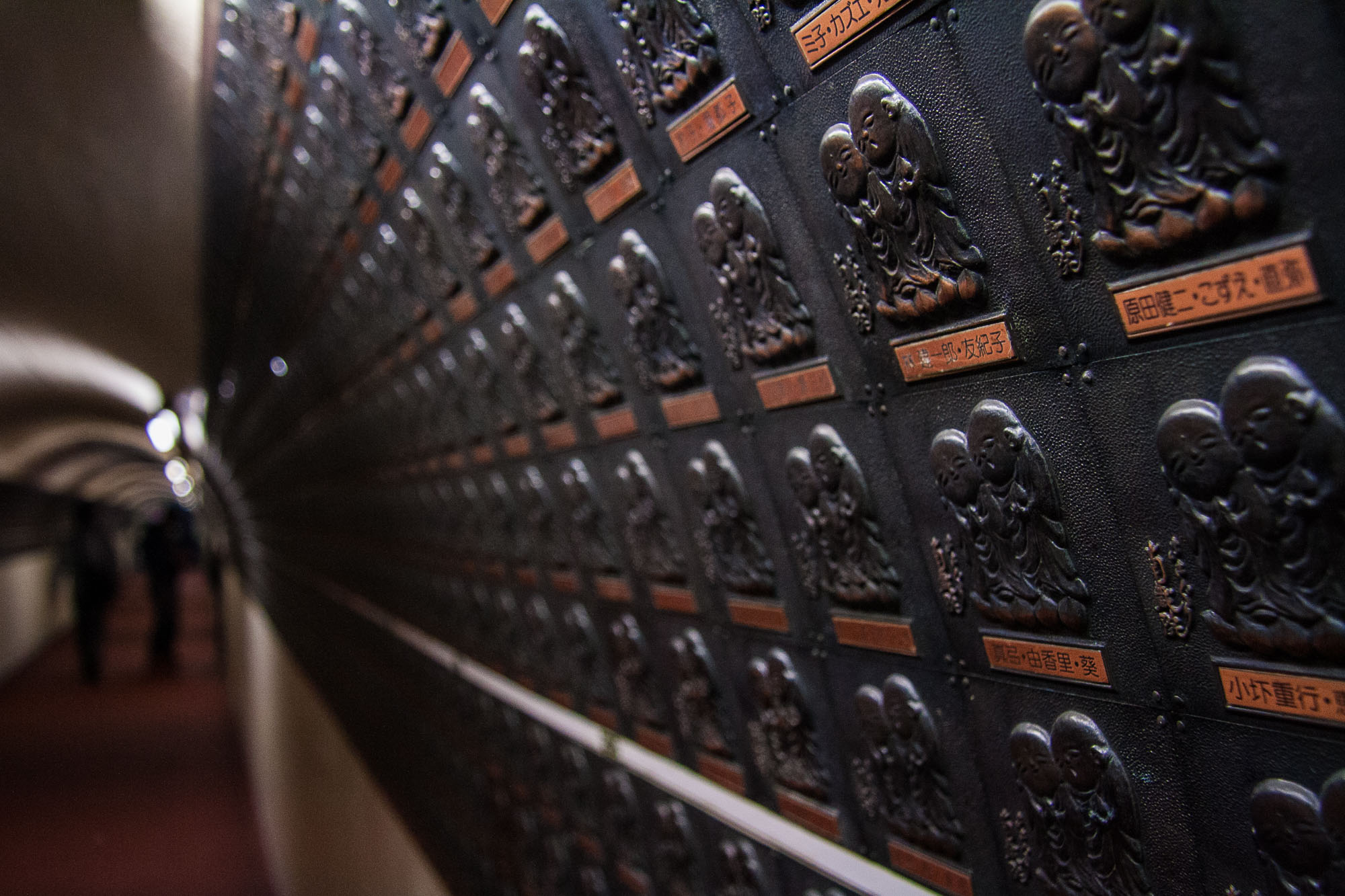 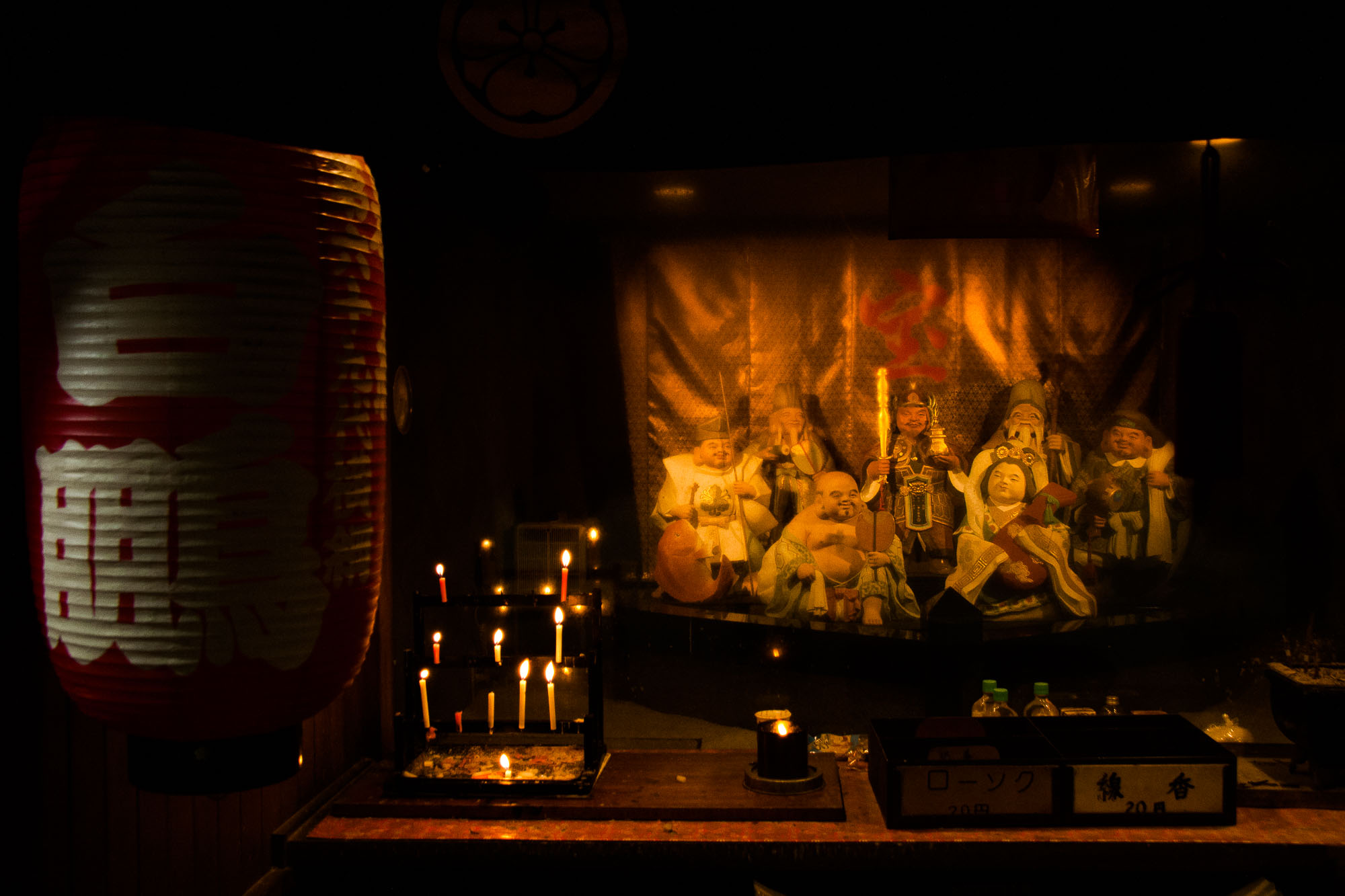 I’m having an issue with “Probably” because it’s driving me crazy now since I’ve been trying to find if it REALLY is the biggest. :/ I just went to visit the other day (I live in Onojo, Fukuoka).

Simonereply
– In reply to: Nihon Scope

I did a lot of research for this post but came up with nothing tangible. Win Sein Taw Ya in Myanmar is said to be the biggest reclining buddha in the world (180m x 30m) but as construction is not yet complete I’m not sure that it counts? Also, I can’t find any information on whether its made of bronze or not. This article lists the biggest reclining buddhas in Asia but as the first one listed is smaller than Nanzoin, it doesn’t seem to have any particular order. Nice blog, by the way!

Nathan Scheerreply
– In reply to: Simone

Well if I remember right some organizations in Myanmar are partially responsible for making the one at Nanzoin happen, so I guess that wouldn’t surprise me… And thank you, I’m certainly not the best writer or photographer by any means but Japan’s certainly got something special so it makes it a bit easier to blog about then other blogs I’ve had in the past.