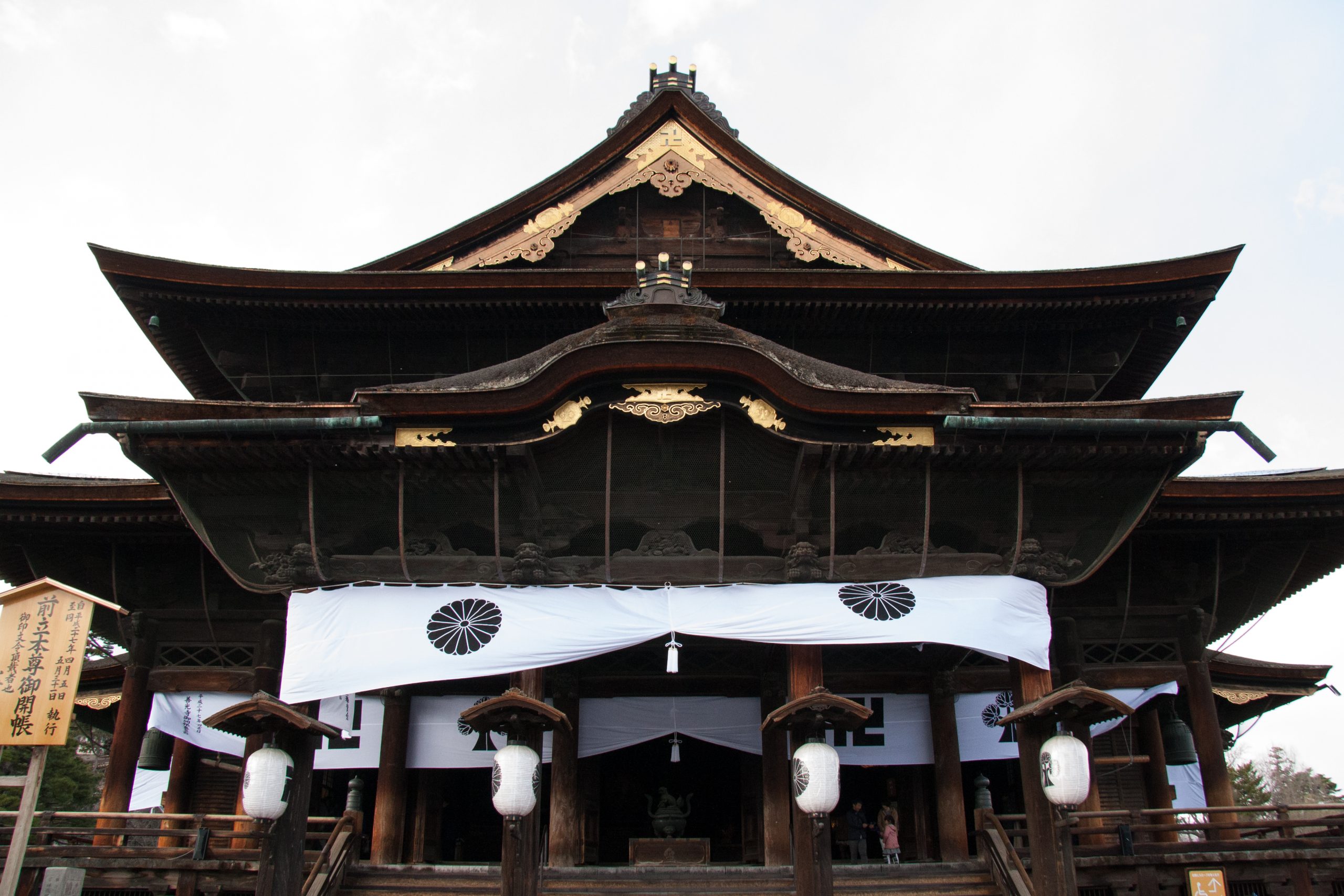 “Oh this isn’t so bad,” I thought as we entered the tunnel. But as we walked further and further, the air became thick with black and eventually I couldn’t even see John in front of me anymore. My grip tightened around the edge of his jacket as he led us deeper into the darkness. I’m not a fan of not being able to see my own hand, but exploring a passage under the altar of one of the most famous temples in Japan is an experience I just couldn’t miss out on.

Nestled in the valley of Nagano city, against the backdrop of apple orchards and snow-capped mountains, Zenko-ji (善光寺) temple boasts a 1400-year history and an annual visitorship of 7 million. It is believed that if you visit the pilgrimage shrine just once in your lifetime, you will be granted salvation and passage into the afterlife. 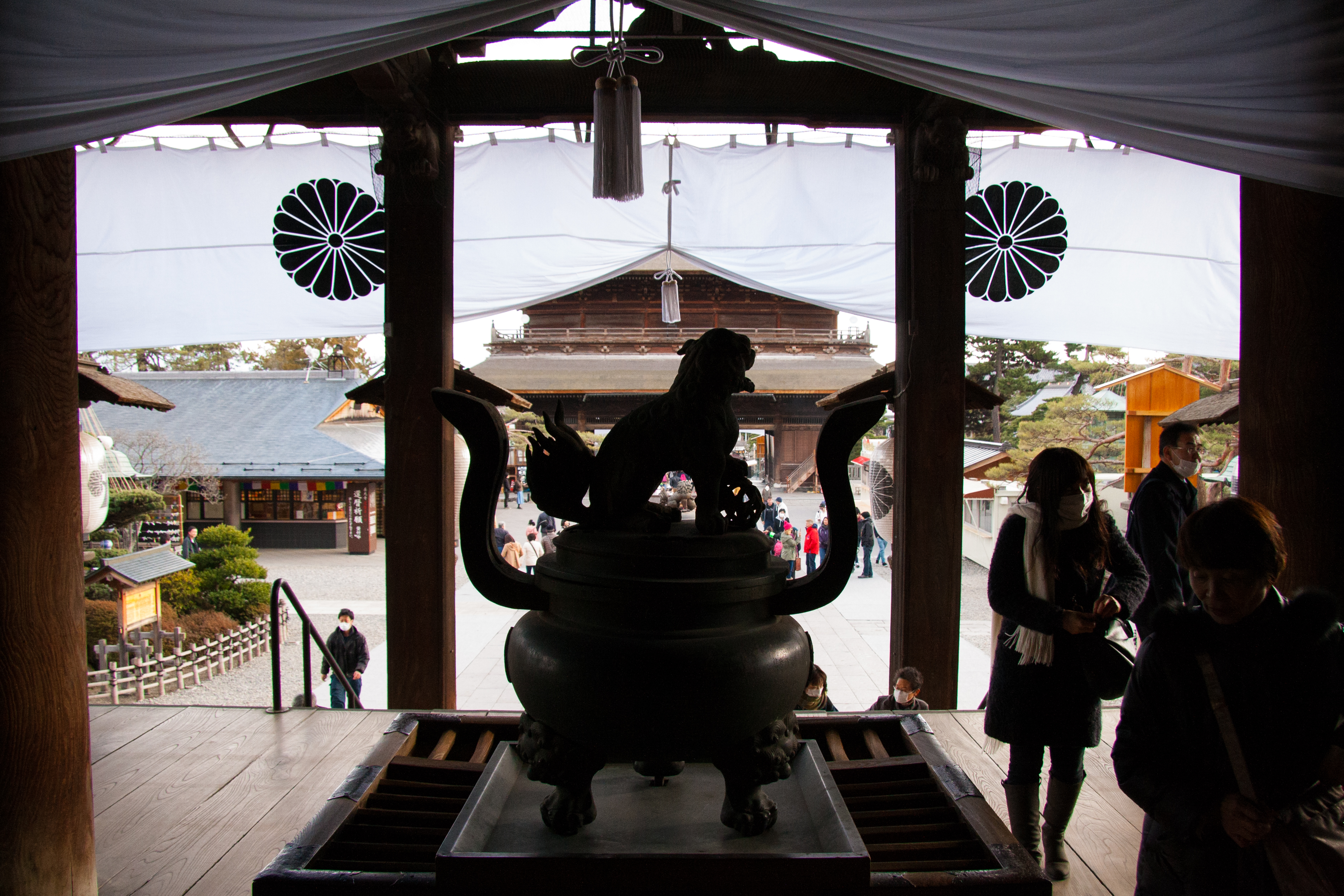 It was the first afternoon of our spring vacation; the students are off enjoying the holidays (well, as much as they can amidst the extra classes and club activities) and John and I had decided to take a few days off to finally make the trip up to Nagano; seeing the famed snow monkeys of Jigokudani Park was on both of our bucket lists. In the end, we planned a 5-day trip starting in Nagano, heading east to Tochigi and then down to John’s place in Ibaraki.

I flew in to Tokyo on the first flight available Wednesday morning and John picked me up with his car, beginning the 275 km (170 mi) drive to Nagano city. We had planned to see the snow monkeys first, and visit Zenko-ji temple on the way out the next morning, but the traffic in Tokyo had other plans for us. When we finally arrived, around 15:30, we went straight to the temple instead. 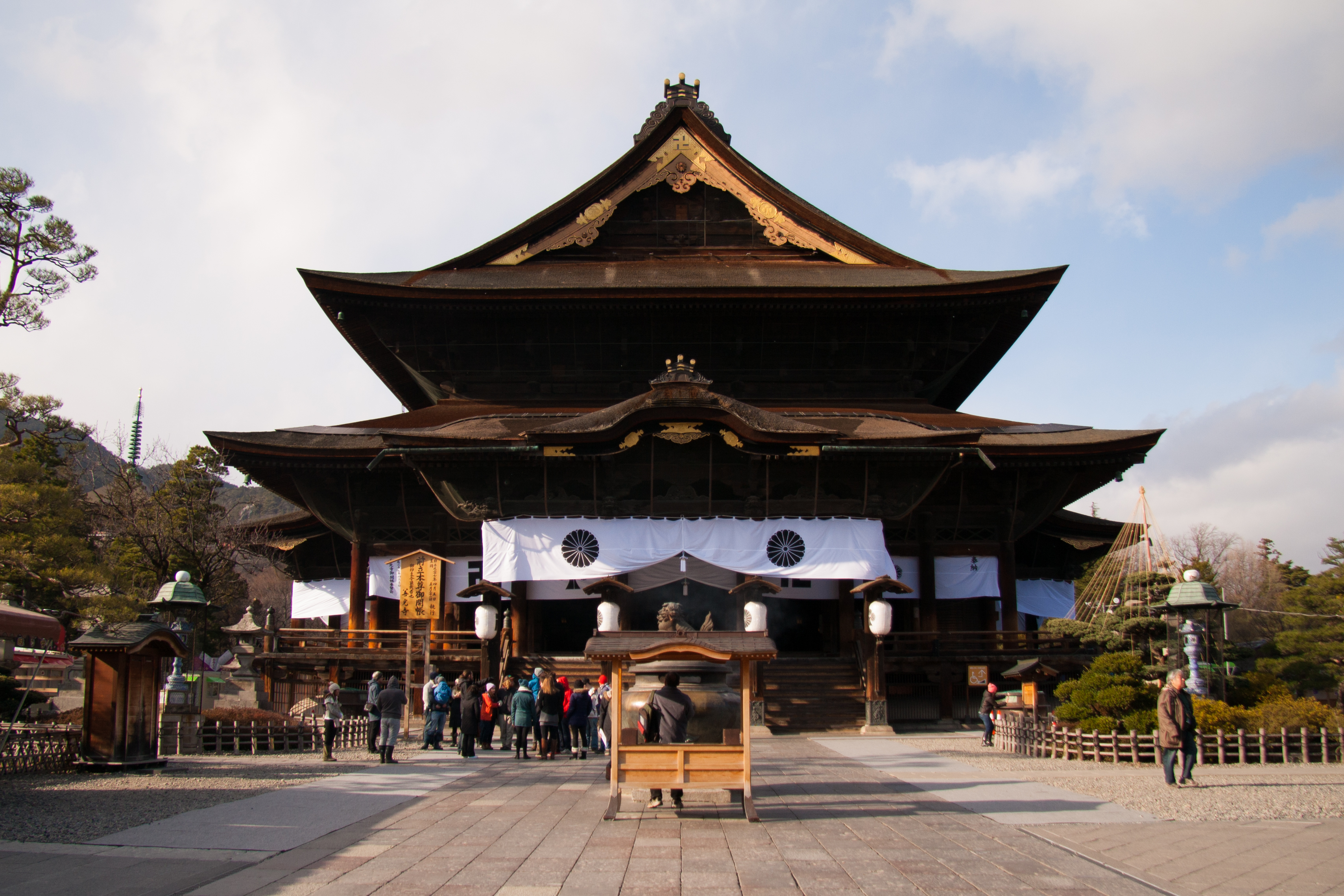 The tunnel, or the Okaidan passage, snakes directly underneath the altar of the main temple hall, called Hondo. In the altar, a sacred statue of the Amida-Nyorai buddha is kept. Along with two others, the statue was gifted to Japan by a Korean king when the country was first introduced to Buddhism. For religious reasons, the statue must be kept in absolute secrecy; not even the main priest is allowed to view it.

There are only two ways that visitors can come into contact with the statue indirectly: by attending a ceremony called Gokaichō (once every seven years) where a replica is put out on display, or by walking through the Okaidan passage and finding the ‘key’ to paradise. 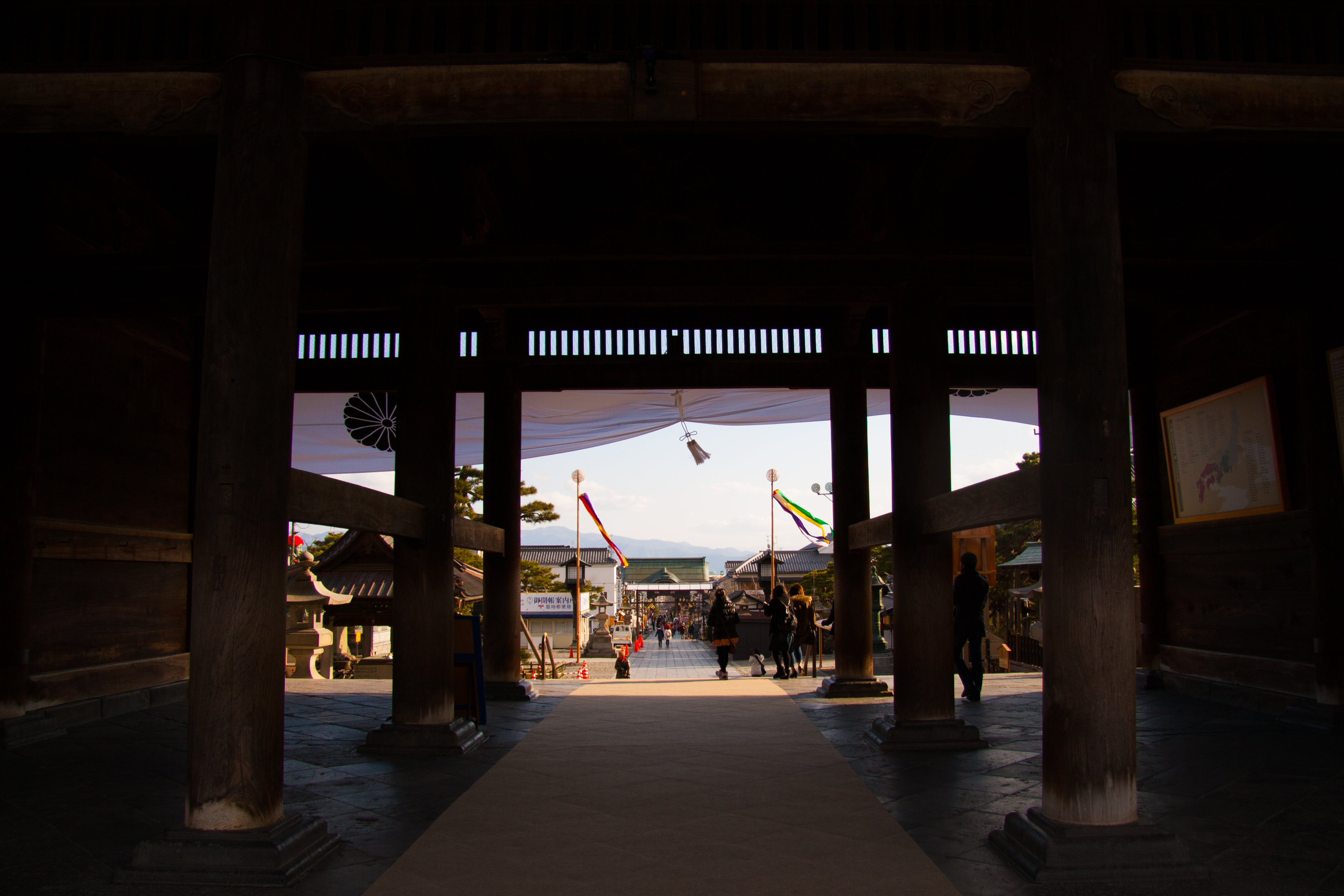 Deep into the tunnel, used for the ordination of priests as it symbolizes death and rebirth, there is a metal bar on the wall. If you find this bar and touch it, you will be granted safe passage into the afterlife.

We were instructed to keep our right hand at waist height on the wall to guide us. And even though the wall feels like a glacier, you’ll want to because you literally cannot see a thing. I was relieved to hear people catching up behind us; in the cold and dark, it was a huge comfort.

I felt a hand pull at my jacket and a woman behind me let out a bit of a scream; turns out she didn’t know there were other people in the tunnel. We all had a good giggle as we made our way through, blind as bats.

Eventually, John and I grabbed hold of something metal. It felt like it was attached to a door, and our first instinct was to push. It rattled around a bit but didn’t give way so we carried on, listening to the man behind us try the same. We rounded another corner and the tunnel was suddenly filled with light; I had somehow overtaken John. We climbed the stairs and found ourselves back in the hall, disoriented. 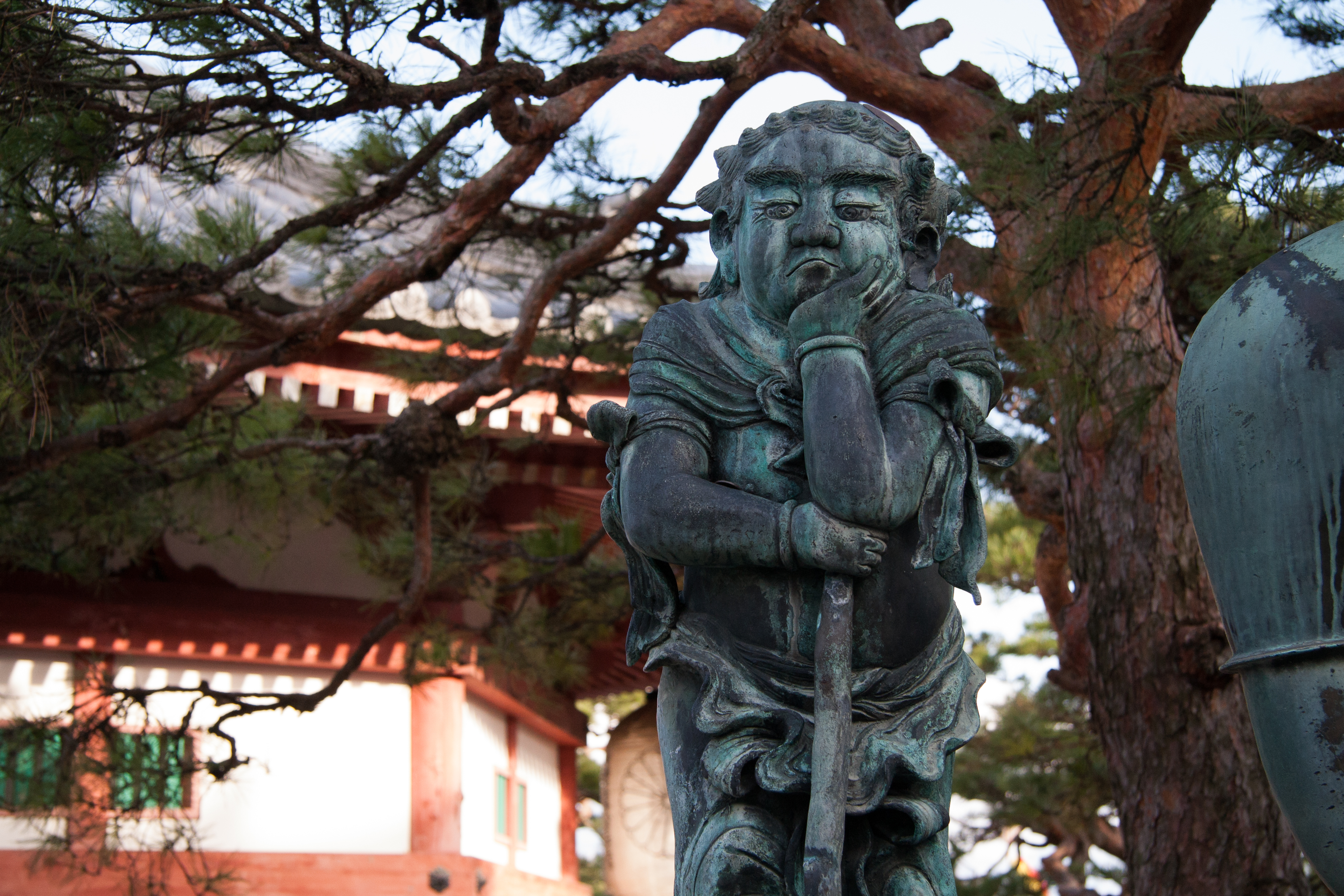 “Did you find? Did you find?” one of the staff members inquired. I nodded and smiled, my eyes still adjusting to the light. He excitedly gestured to a giant mirror hanging on the opposite wall. “You see? Now you are new person.”

We stared into our reflections for a bit, not sure of what was expected, and I wondered briefly how one should feel after finding the key to the afterlife. 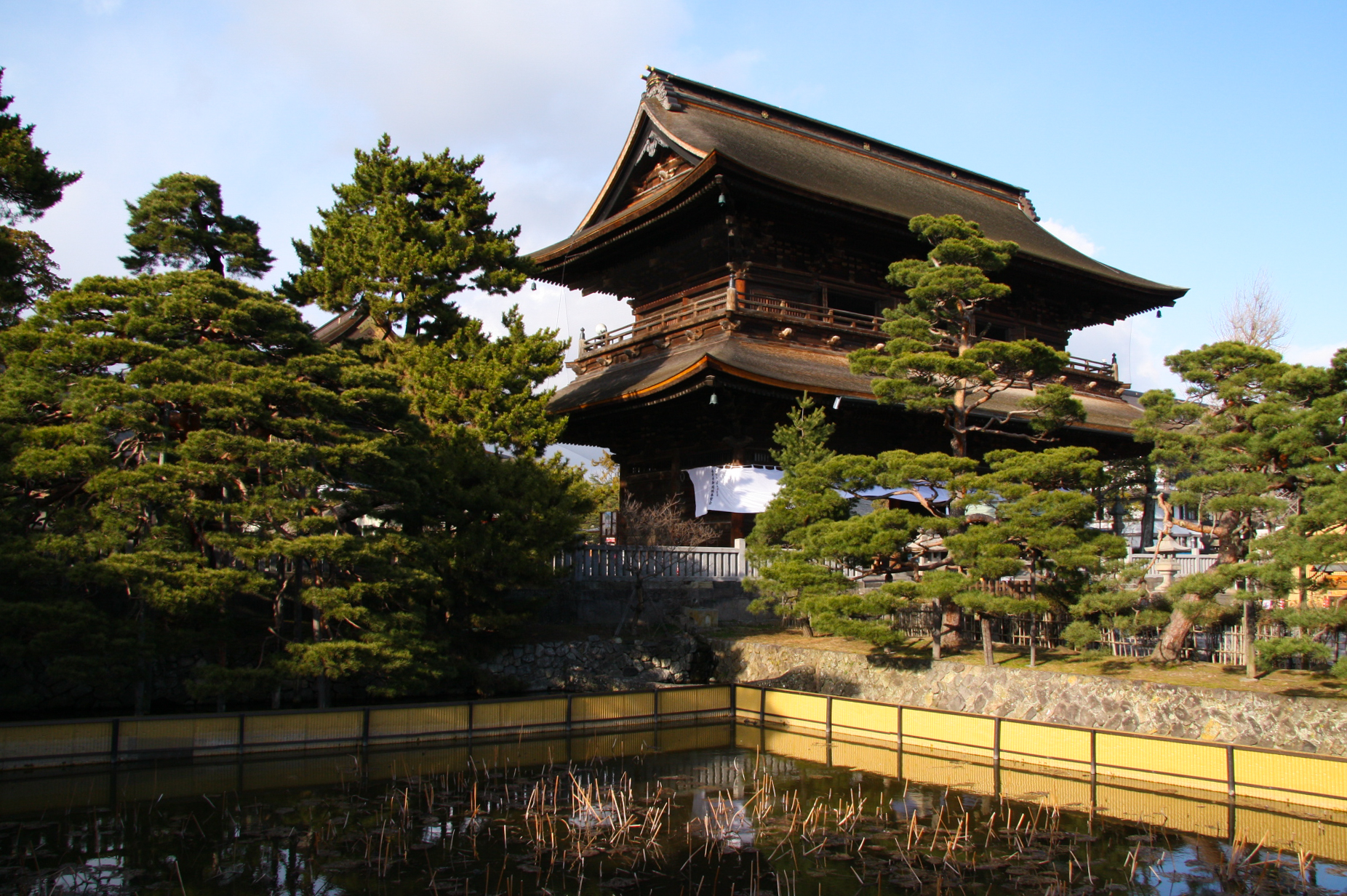 The tunnel tour is included in a ticket that you can purchase from machines at the entrance to the hall on the right. It also includes the inner temple of the Hondo hall and the Zenkoji History Museum in the Chureiden Pagoda. The museum only admits visitors until 15:30 though.

The temple is beautiful inside, complete with giant buddha statues and elaborate gold work. But taking pictures in the hall is not allowed, unfortunately.

The same staff member approached us again and we had a bit of a chat. He announced that he would be ringing the bell at 16:00 and took us outside to show us where it is. 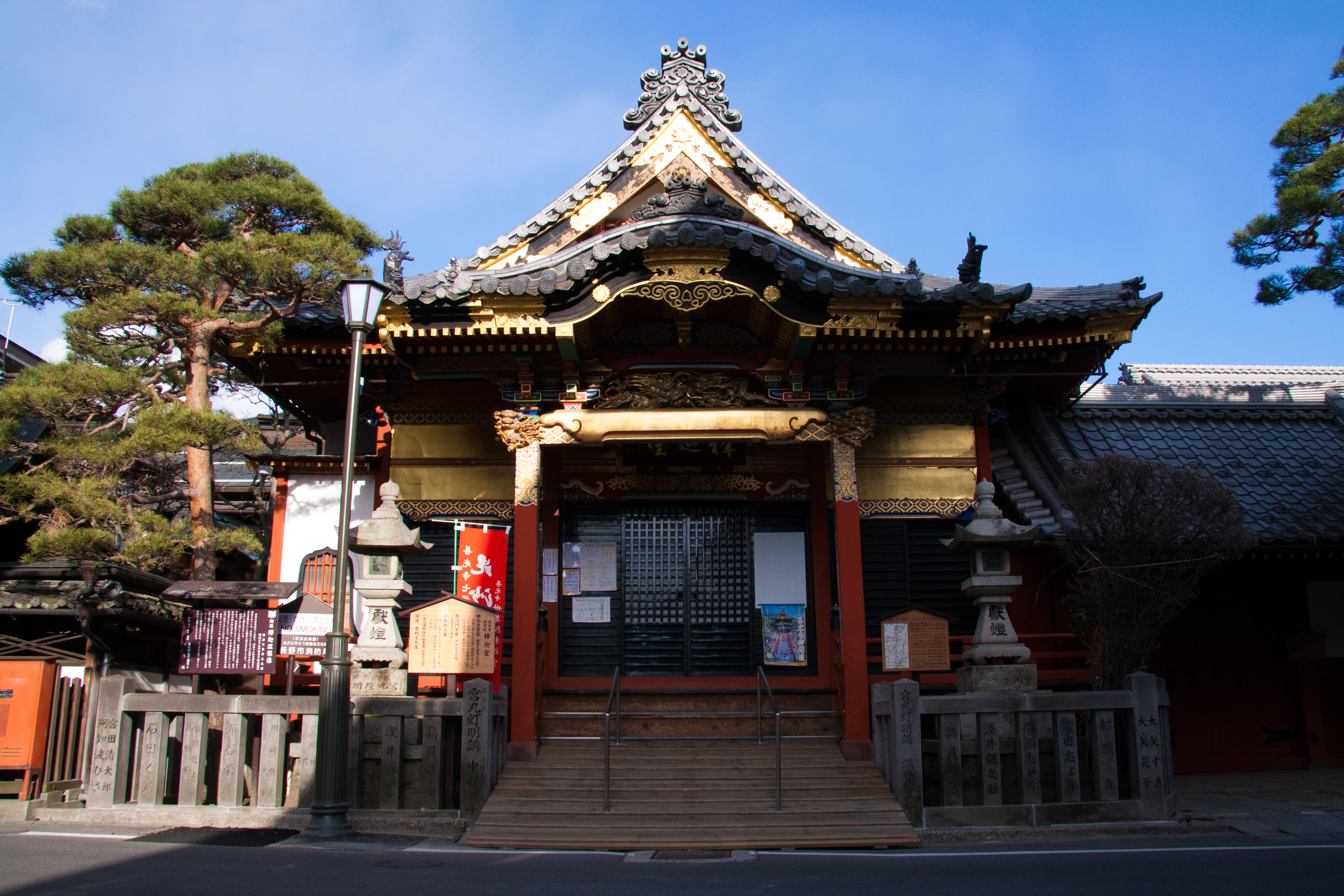 We had parked in the lot behind the main hall of the complex so we approached the complex from the back. Most visitors start at the Nioman gate on Nakamise-dori (shopping street) and walk up to the second gate, Sanmon. The shopping street looks like a scene out of a village, and is also the original location of the temple. After being destroyed by fires originating in shops and houses and rebuilt several times, the temple was eventually relocated further north. 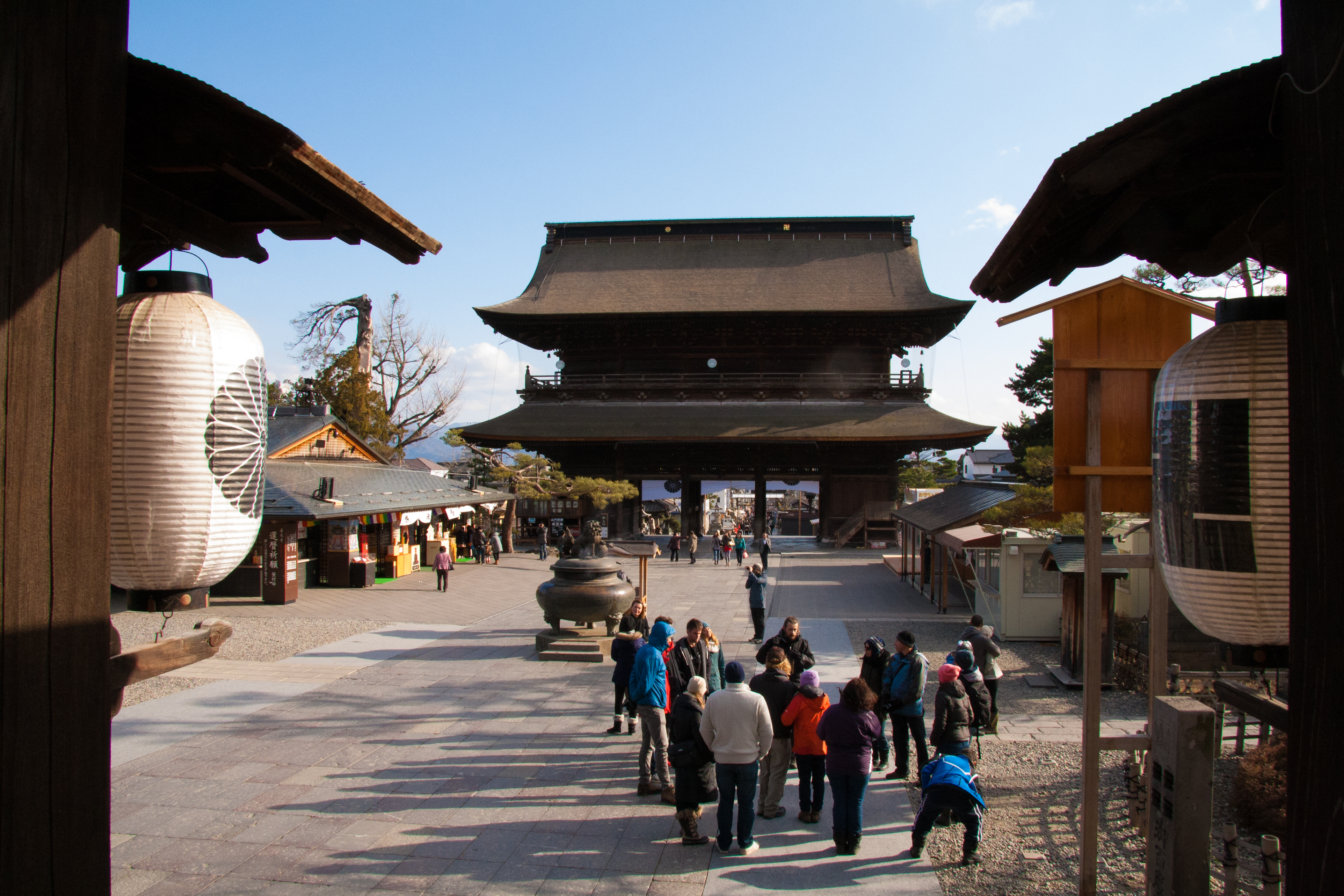 With over 30 buildings, the Zenko-ji complex is quite large and there is lots to see, although most of the buildings are undergoing maintenance and construction at the moment. As we walked around exploring, snowflakes began to fall.

At 4 o’clock, we hurried back to the bell tower to see it being rung, and as the cold was getting the best of us, took it as a fitting end to the day. We weaved through streets and streets of bare apple trees, off to our hotel for the night. 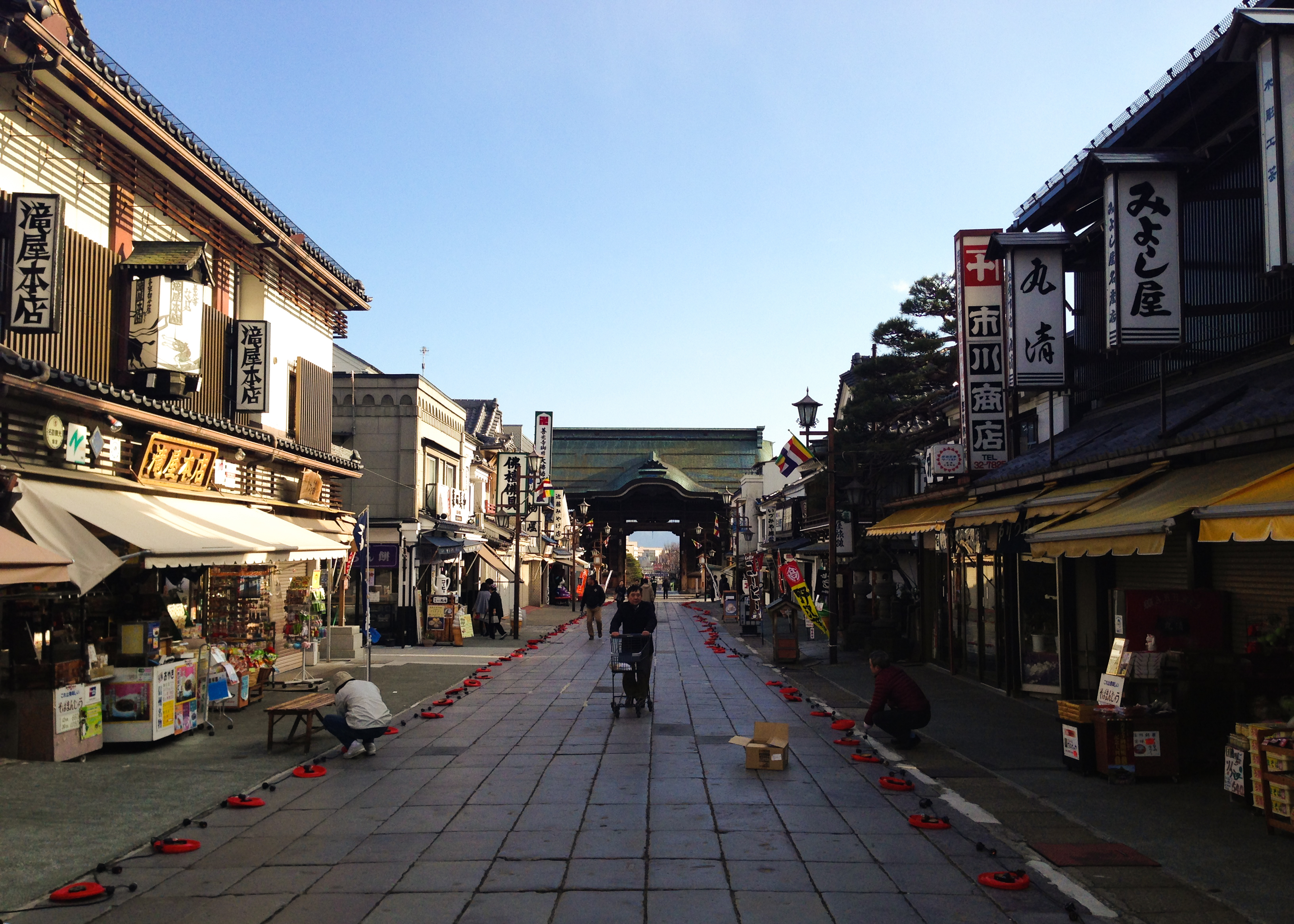