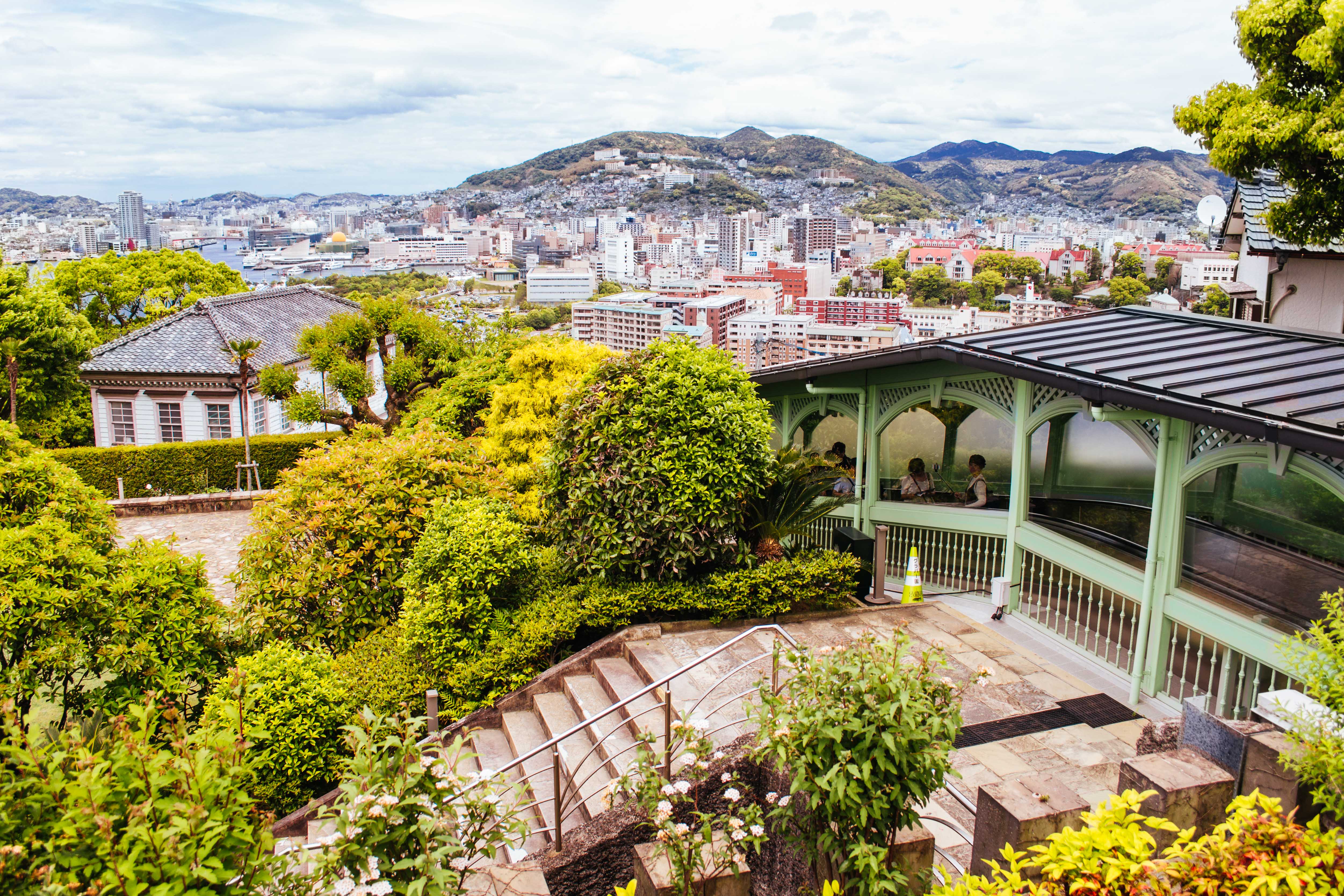 On top of Minami-yamate, a gorgeous hillside overlooking Nagasaki Harbour, sits Glover Garden (グラバー園), an open-air museum of the homes of former Western residents of the city, who settled there after the end of Japan’s isolationism in the latter half of the 19th century. The Garden is the original site of the former residence of Scottish trader, Thomas Blake Glover, and features six other mansions which were dismantled, moved, and reconstructed here as important national cultural properties.

The walk up to Glover Garden begins at Oura Catholic Church, the oldest wooden church of Gothic architecture in Japan. It was built in 1864 by the French missionary Bernard Petitjean of Fier, and dedicated to the 26 martyrs who were executed on Nishizaka Hill. In 1865, Hidden Christians from Urakami came to the church and professed their faith to Father Petijean after two years in hiding. Pope John Paul II visited the site in 1981 and declared it the “Miracle in the East”.

Next to Oura Church, is one of two entrances into Glover Garden. Along with entry, the 600円 ($5.20) ticket gets you a map and cardboard cutout Glover mask that you can use to take pictures with. Two escalator rides later, Austin and I found ourselves in front of the Mitsubishi dock house, a former facility where crew members could rest while their ships were in for repairs. Even more impressive than the house is the view from its garden, which overlooks Nagasaki Bay and the surrounding hillside.

As we continued on the explore the former Ringer House, a bungalow-style residence with a veranda on three sides,  it became clear the the outsides of Glover Garden are far more impressive than any of the insides. Some areas of the houses have no historic furnishings of decorations, and in the rooms that do, their arrangement seems to be an afterthought. There’s also very little in the way of information on signs or placards, in English or Japanese. For a place that’s striving for World Heritage Site status, it was kind of disappointing.

Still, we enjoyed looking around, especially at the former Alt Residence, a stone-built house with a gable-roof. On the steps of its porch, a wedding ceremony was underway, which was both awkward and amusing when no one in the party seemed to acknowledge the hordes of tourists walking around. On our way to the Glover House, we passed a group of young women dressed up in period clothing, which is available for rental to “help you create the right mood”. For another 600円 ($5.20), you can choose your favorite outfit from the museum’s collection and wander around for 30 minutes.

The most interesting thing about Glover Garden seems to be the story of Glover himself.  The young Scotsman came to Nagasaki in 1859 when he was just 21 to manage the newly established office of a British trading house dealing in tea (and more than likely a bit of opium as well). Just two years later, he established his own business, named the Glover Trading Company, which dealt illegally in the trade of ships and arms with the Satsuma and Chosu clans in Kyushu, and the Tosa clan in Shikoku, who all resented the policies of the government of the shogunate.

When those clans led the overthrow of the shogunate in 1868, however, and Japan opened its doors once more to the rest of the world, the market for weaponry soon became saturated. Glover devoted his energies to a new project: a coalmine on Takashima Island, which was the first in the country to be worked with Western technology.

Four years later, Glover was recruited to work as a consultant for a new shipbuilding business in Shikoku, today known as the global conglomerate Mitsubishi. The new salaried position allowed Glover to work on some side projects, including brewing beer. Glover became one of the prime movers of the Japan Brewery Co., predecessor to the Kirin Brewery Co. The bushy upper lip of the mythical kirin on the beer’s label is said to have been inspired by Glover’s trademark ‘stache.

Glover spent the last years of his life between Nagasaki and Tokyo, where he lived with his wife Tsuru and their daughter Hana until his death in 1911. It has been said that the couple were part of the inspiration for the opera Madame Butterfly, in which a U.S. naval officer rents a house on a hill in Nagasaki for him and his soon-to-be wife, nicknamed “Butterfly” (“Chocho“). There is no evidence to support this claim, other than “Chocho” being a known nickname for Tsuru, and the existence of a photograph showing Tsuru wearing a butterfly-motif kimono.

When Glover first came to Nagasaki, before he built his house on Minami Yamate hill, he was allotted accommodation in the city’s concession area, called Dejima (出島). After a last look around Glover Garden, we headed there next.

The 13,000 m2 artificial island was built just south of Nagasaki’s current city center and served as the only post between Japan and other countries for 200 years during the sakoku period. Dejima was constructed under the orders of the Tokugawa Shogonate in 1636 to accommodate Portuguese missionaries and halt the spread of Christianity. After the Shimabara Rebellion the following year,  when Portuguese ships were banned from coming into the harbor, the Dutch trading post on Hirado Island was moved to Dejima.

After World War II, it took several decades for the ownership rights of Dejima to be transferred to Nagasaki City. In 1996, the city broke ground on a restoration project that is now in its fourth phase. Today, visitors can enjoy 16 restored buildings at the museum, which includes important monuments, excavated relics and lifestyle exhibits.