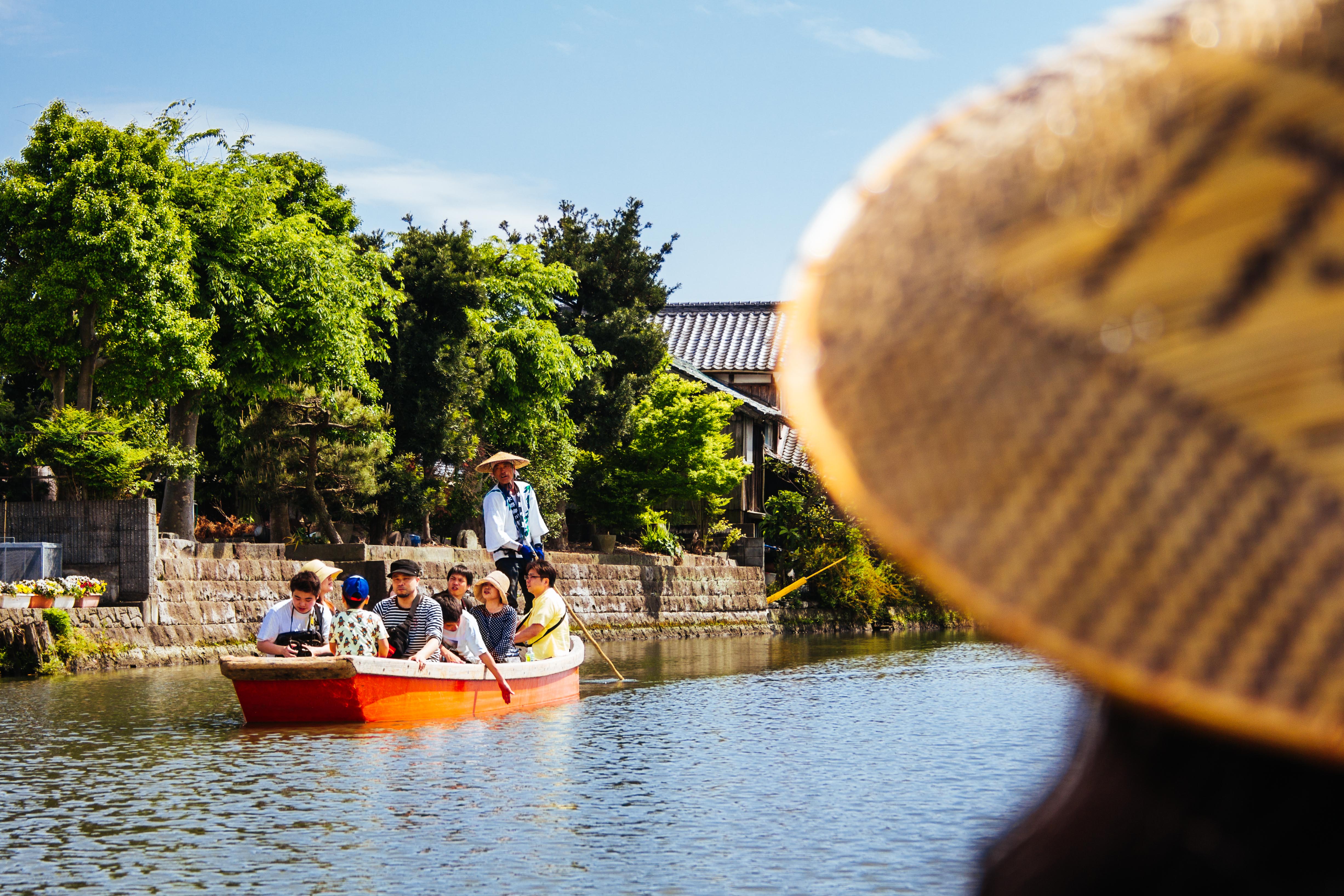 “Aaa-eeh,” the punter sang, “tsukino dokoromo hatsukano yamimoe.” His throat danced around a different note for each of the syllables of the old Japanese poem. The sun was beating down, making me wish we had forked out the 100円for a kasa hat. Still, listening to his voice and water lapping up gently against the side of the donkobune was like a massage for the soul.

It’s easy to see why 1.3 million visitors descend on Yanagawa, Fukuoka every year to ride one of these traditional boats around the city’s canals. In total, 930 km (578 mi) of ancient waterways reticulate the affectionately nicknamed “Little Venice of Kyushu”. The architecture, atmosphere and cuisine is worlds away from its Italian counterpart, but Yanagawa is a city of water in its own right.

To the southwest of it lies the Ariake Sea, known for its high tidal range which reaches 6 meters in some areas. The strong ebb and flow of the tides grinds down earth and sand brought into the sea by rivers into a fine silt, creating vast mud flats at low tide. 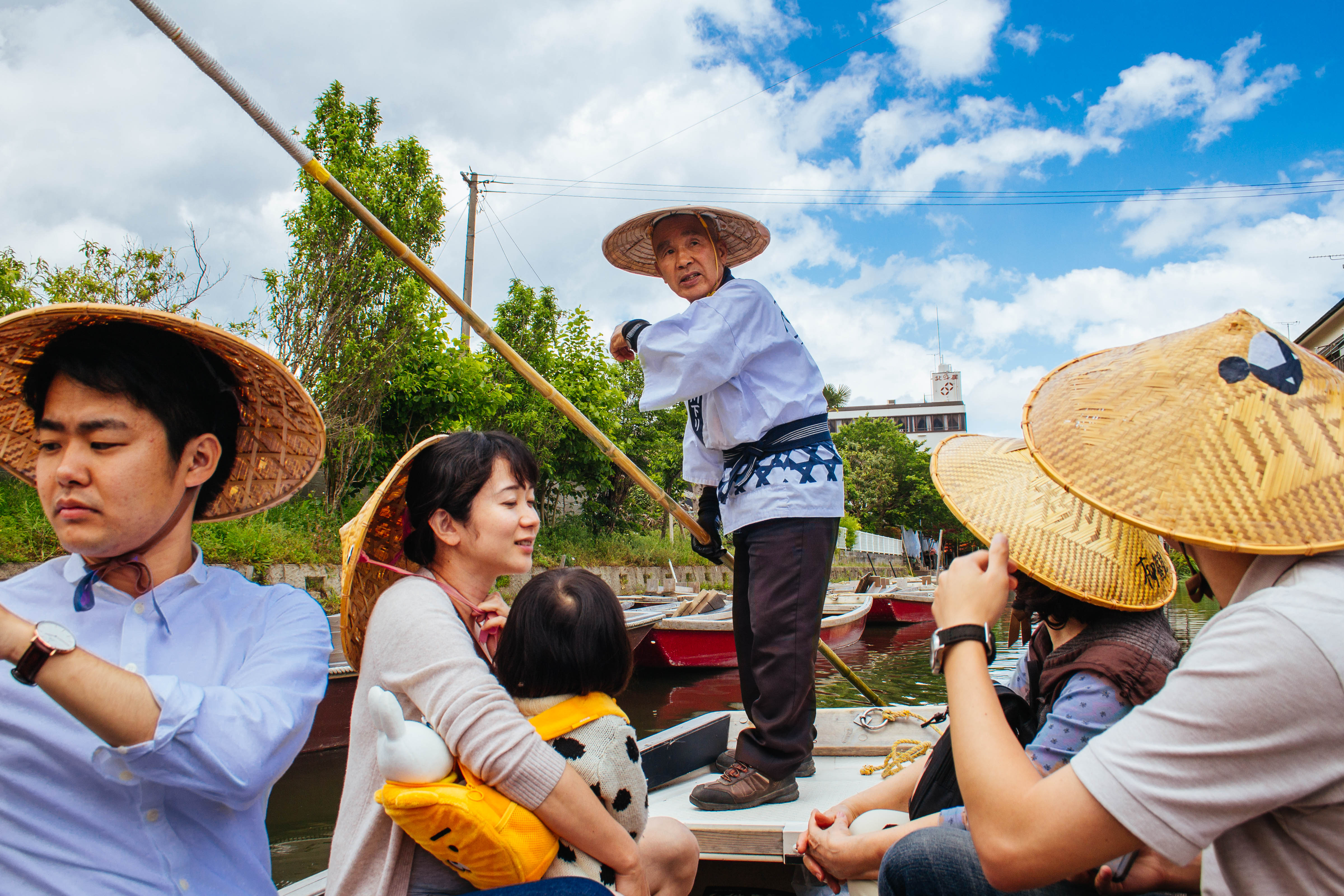 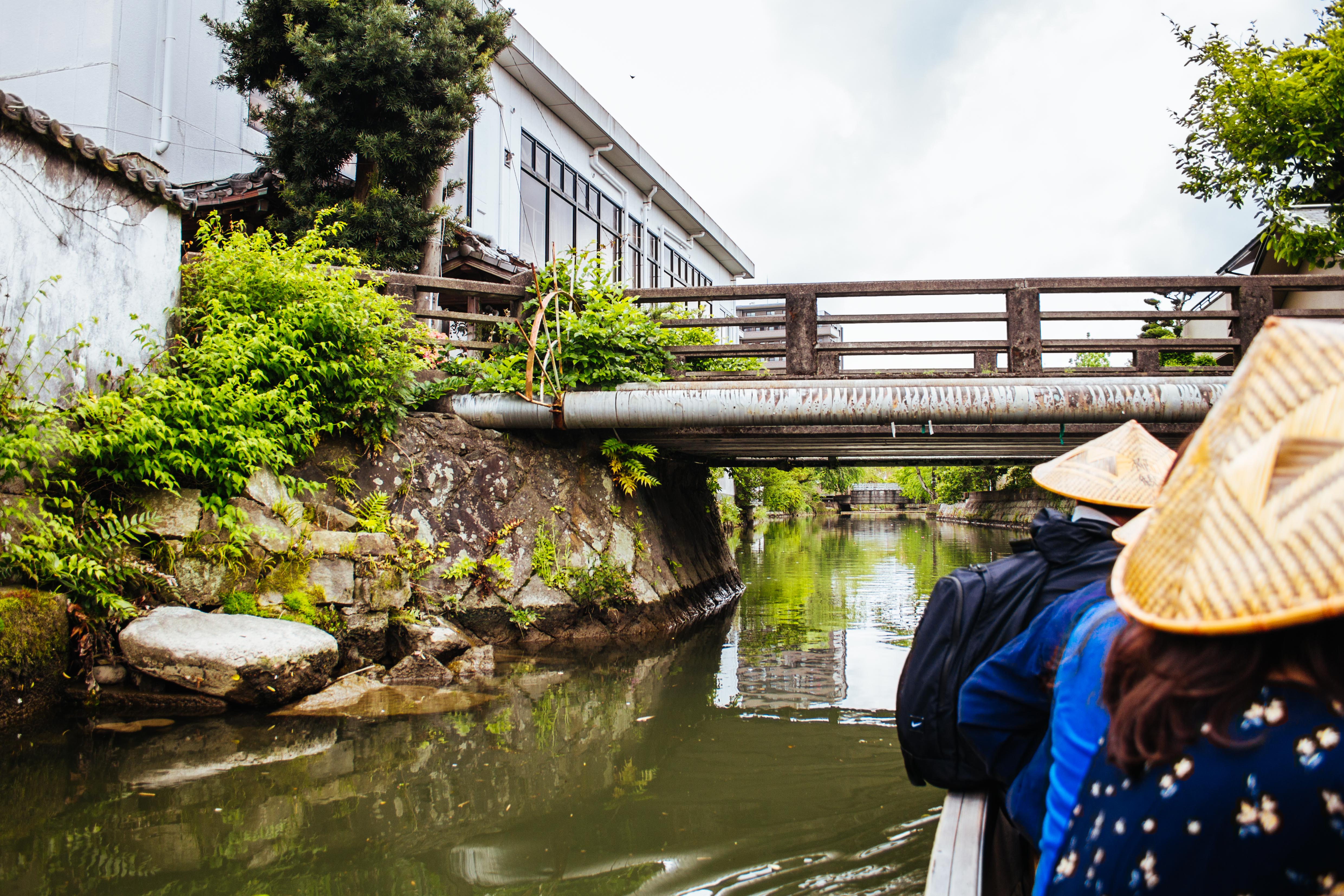 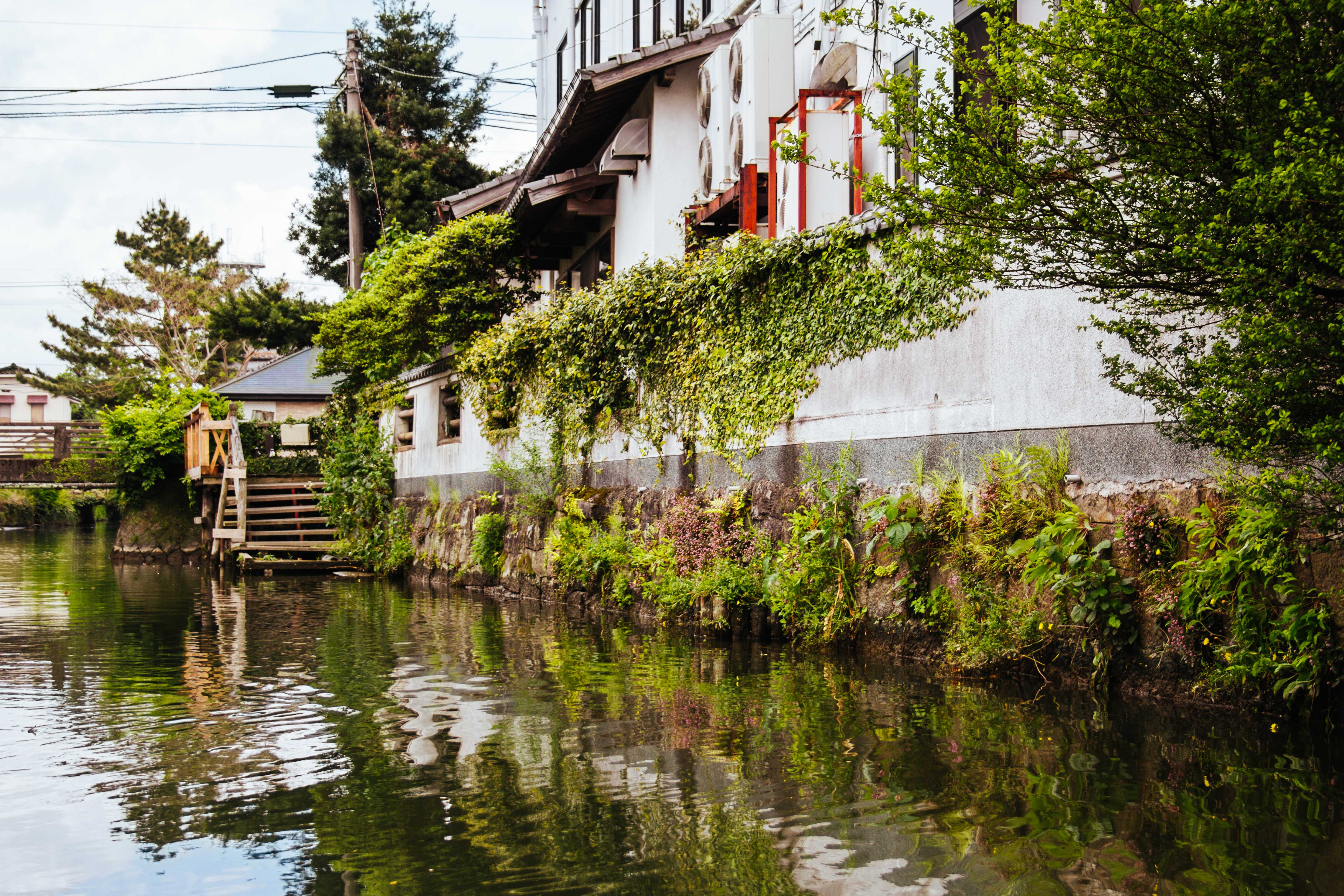 The soil of Yanagawa was formed in much the same way. In ancient times, the land in the tidal zone was a waterlogged marsh until people began to dig canals to drain it. This created firm ground upon which they built houses, and a secure supply of water.

Yanagawa is also known for its castle, which was once an impenetrable fortress built in the mid 16-th century by the Kamachi clan during Japan’s sengoku, or “warring states”, period. When Tachibana Muneshige became lord of the castle, he ruled the domain for a stipend of 132,000 koku.

After his contributions to the Battle of Sekigahara in 1600, however, Tanaka Yoshimasa replaced Muneshige as lord of the entire Chigoku domain with a combined stipend of 325 000 koku. He built a five-tiered castle tower and began to make improvements around the city. 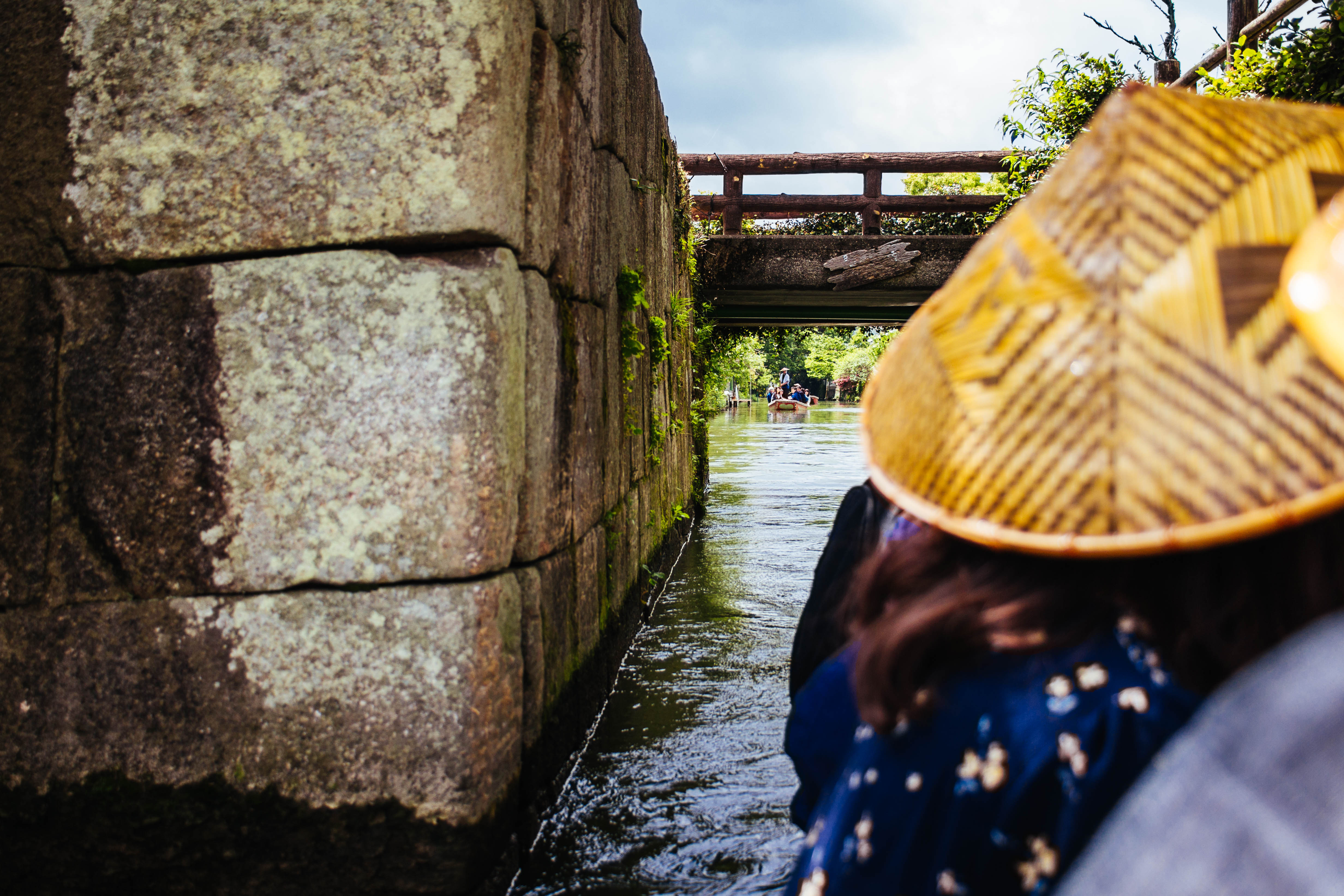 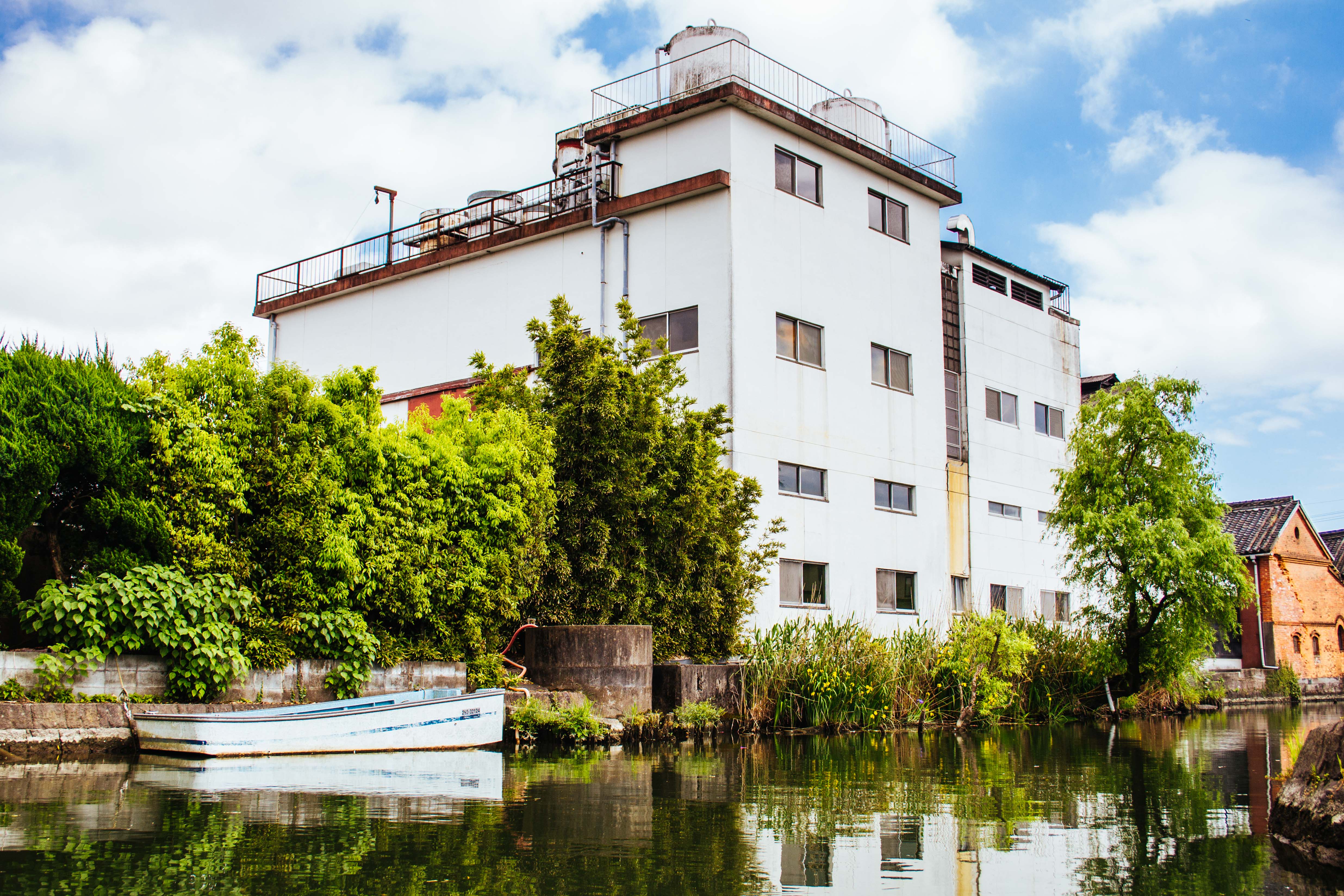 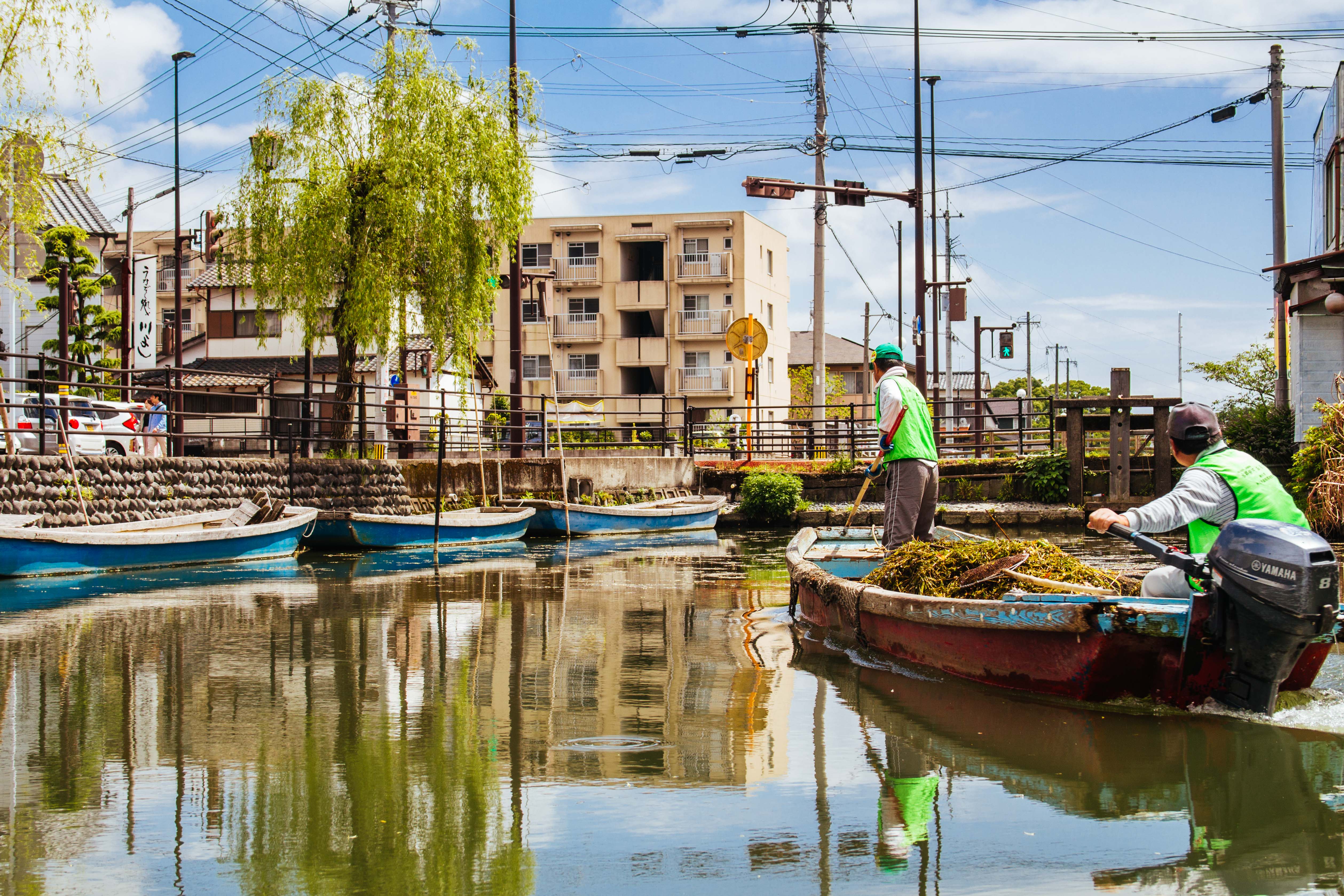 Yoshimasa constructed a weir on the Yabe River, about 8km east of Yanagawa, to divert water to the area surrounding the castle via a network of waterways. To protect the fortress, a gate could be closed to flood the perimeter.

The canals were welcomed by the people of Yanagawa who couldn’t rely on the local wells which contained high levels of salt. Not only did the new waterways function as a source of drinking water, but they helped protect the low-lying land as well.

At high tide, the surface of the Ariake Sea is actually higher than some of the land bordering it. In fact, most of Yanagawa is just meters above sea level.The canals retain water until it can be discharged when the tide goes out, and their narrow bridges prevent water from rushing downstream even during heavy rainfall. 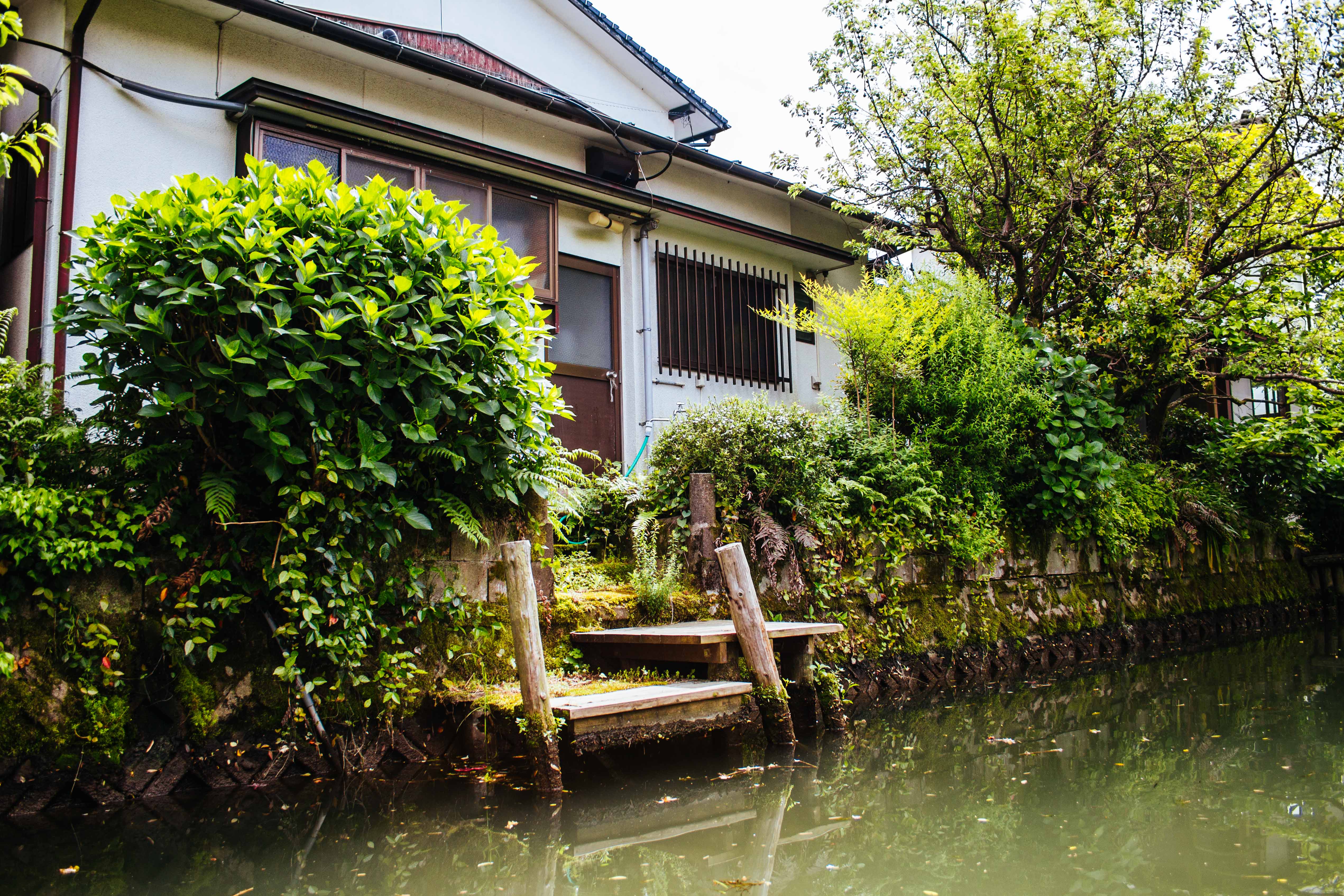 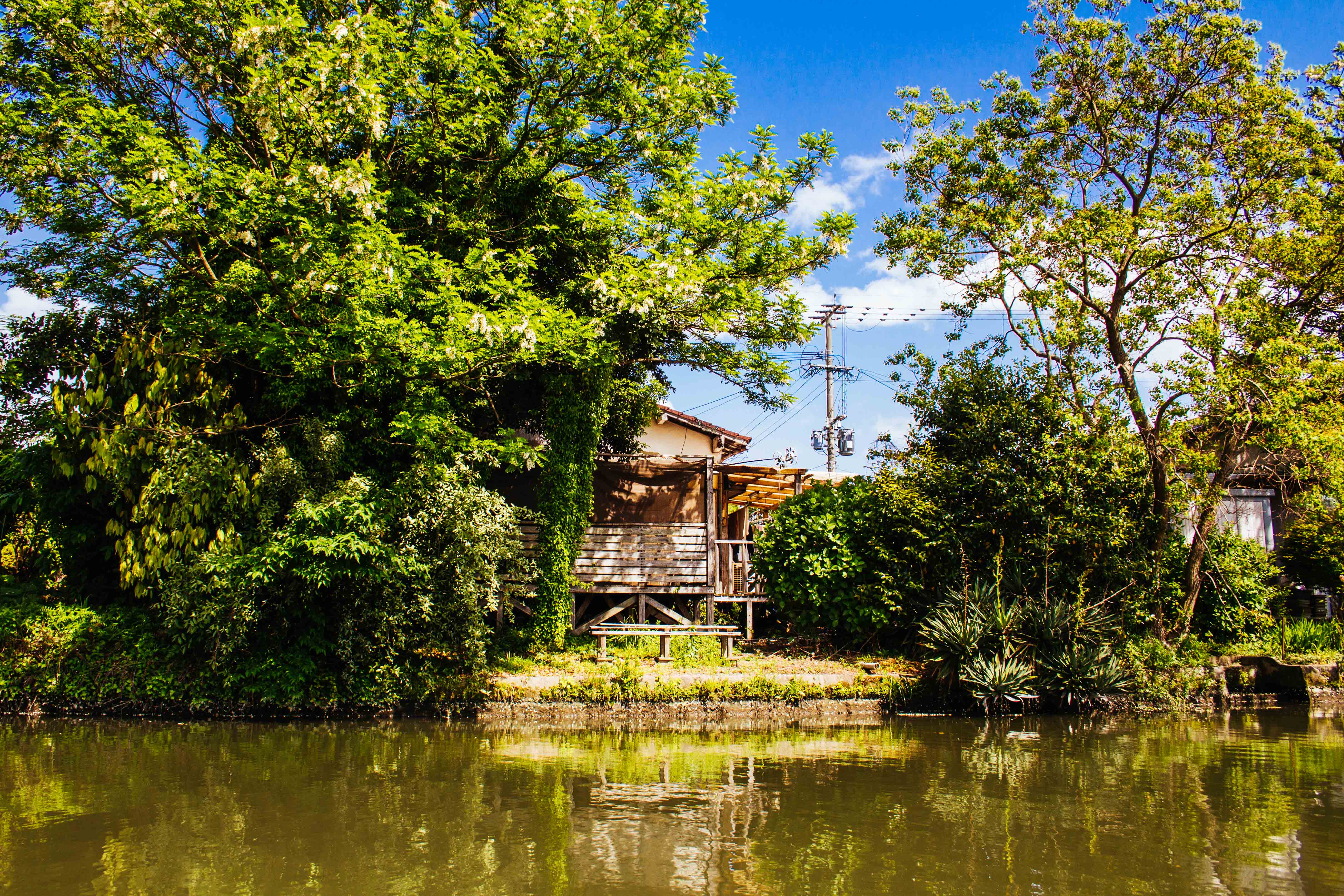 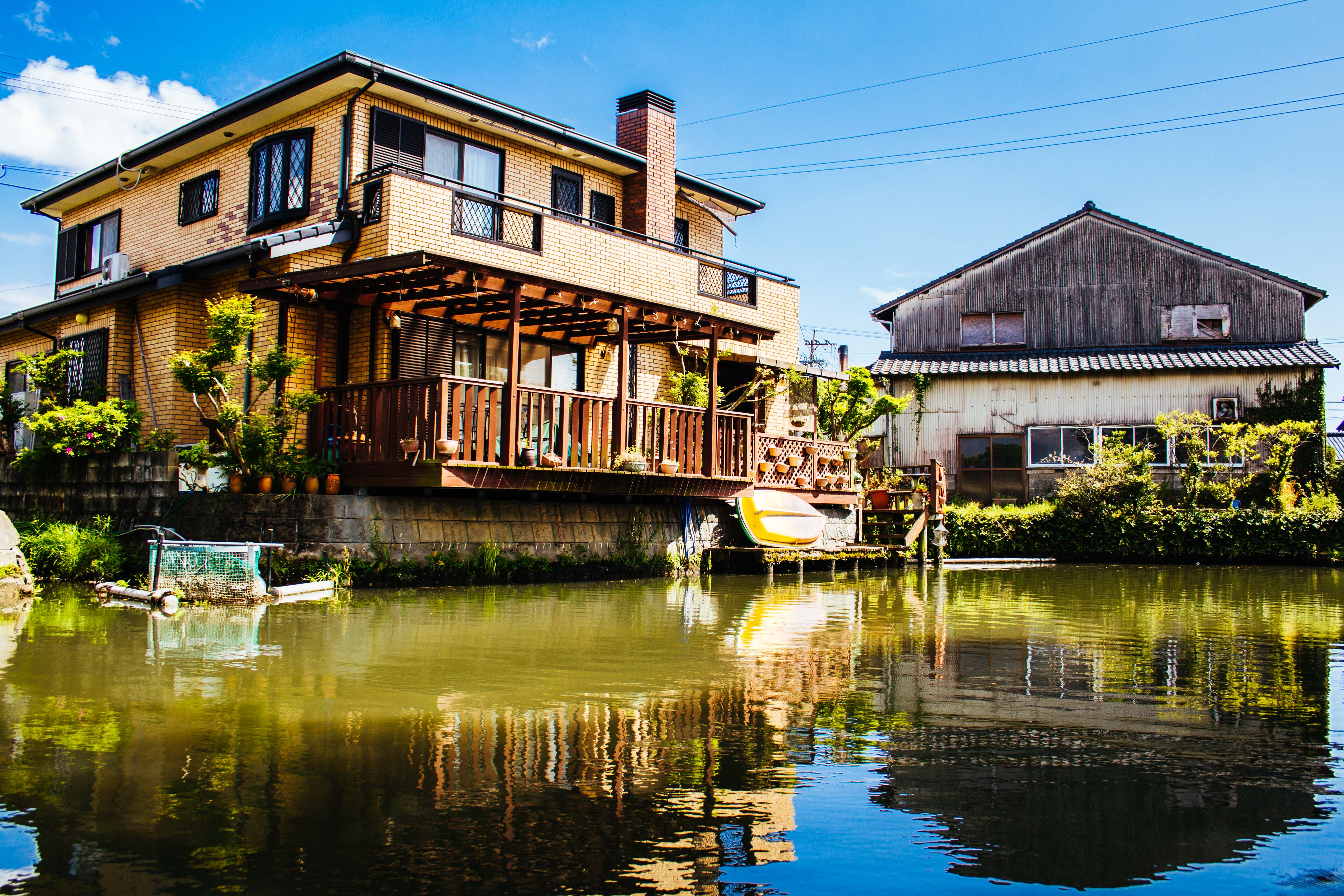 In 1965, water pipes were installed to provide clean water throughout the city and the canals fell into disuse, becoming clogged with silt and vegetation. The city decided to fill in the canals in favor of a sewerage system.

When the people of Yanagawa realized the survival of the canals was under threat, they campaigned for the waterways to be restored to their former glory and began several maintenance initiatives. To this day, local residents wake up early every morning to clean the canals.

There are five kawakudari (going downstream) punting tour companies that operate around a 5 km stretch of the canals in Yanagawa. Some punters take their guests to a floating market that sells beer and ice-cream; others perform neat tricks, like climbing off a boat while it passes through a tunnel and jumping back onto it from the bridge once the boat comes through the other side. Almost all of them sing while they steer the donkobune and tell stories about the buildings passing by. 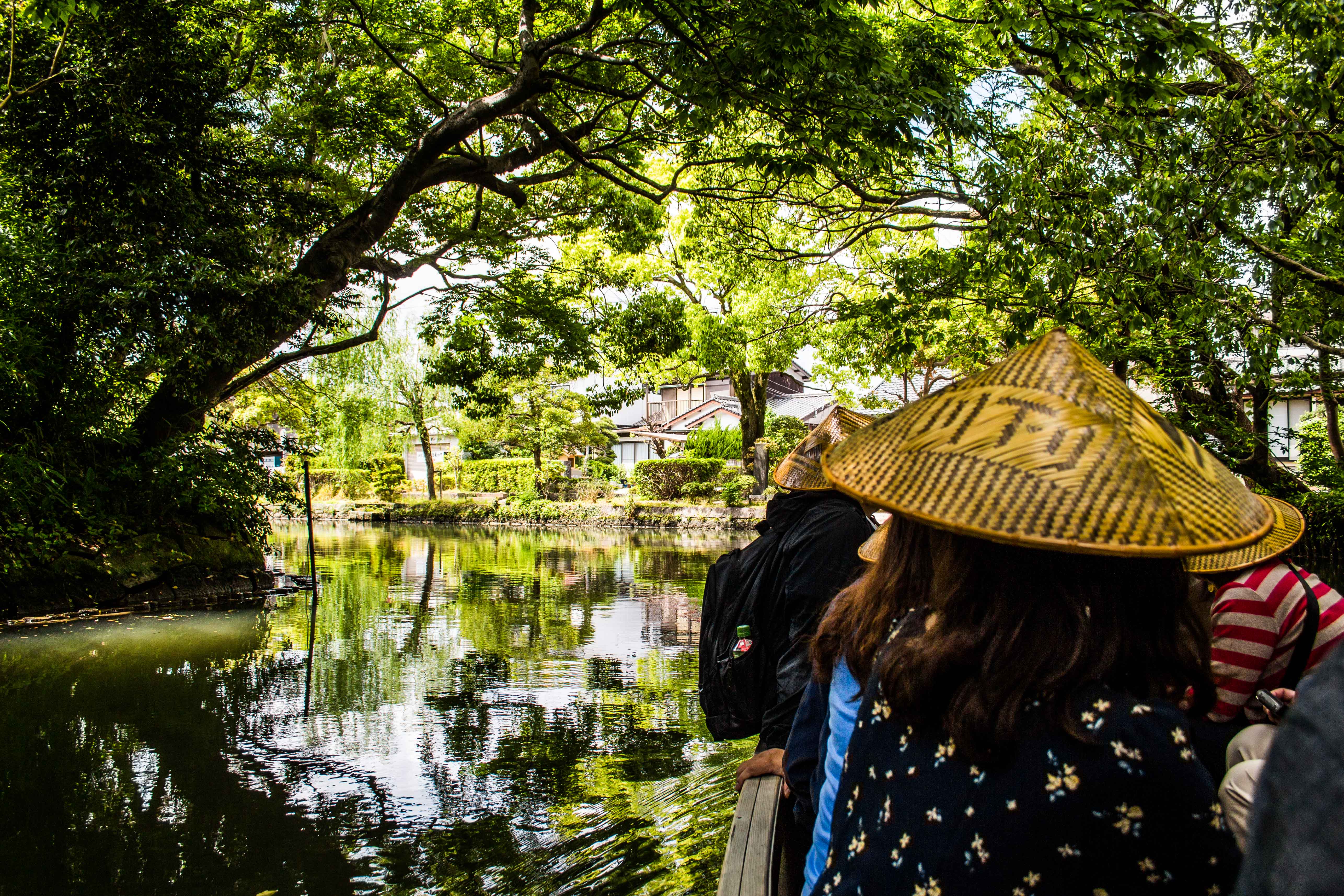 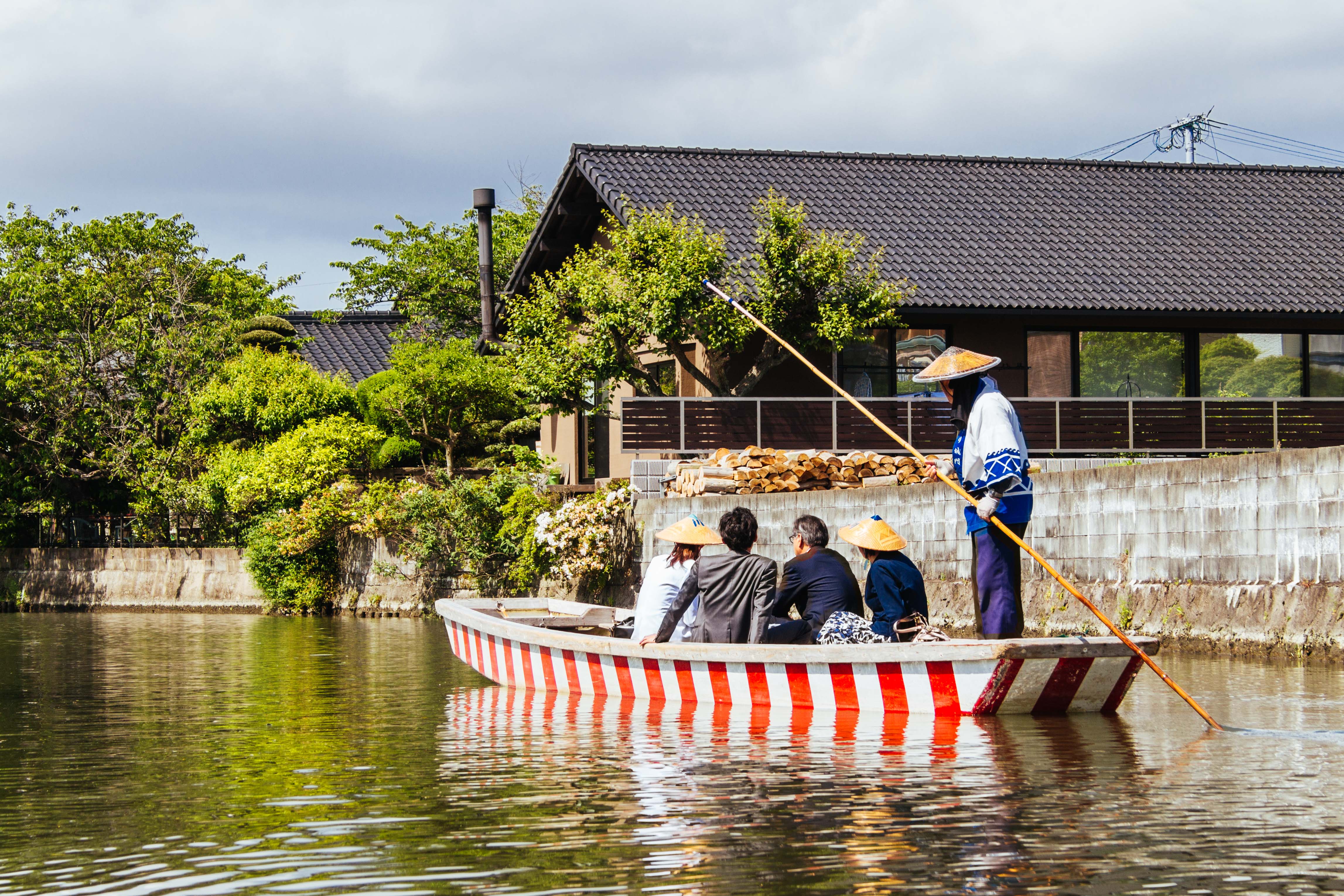 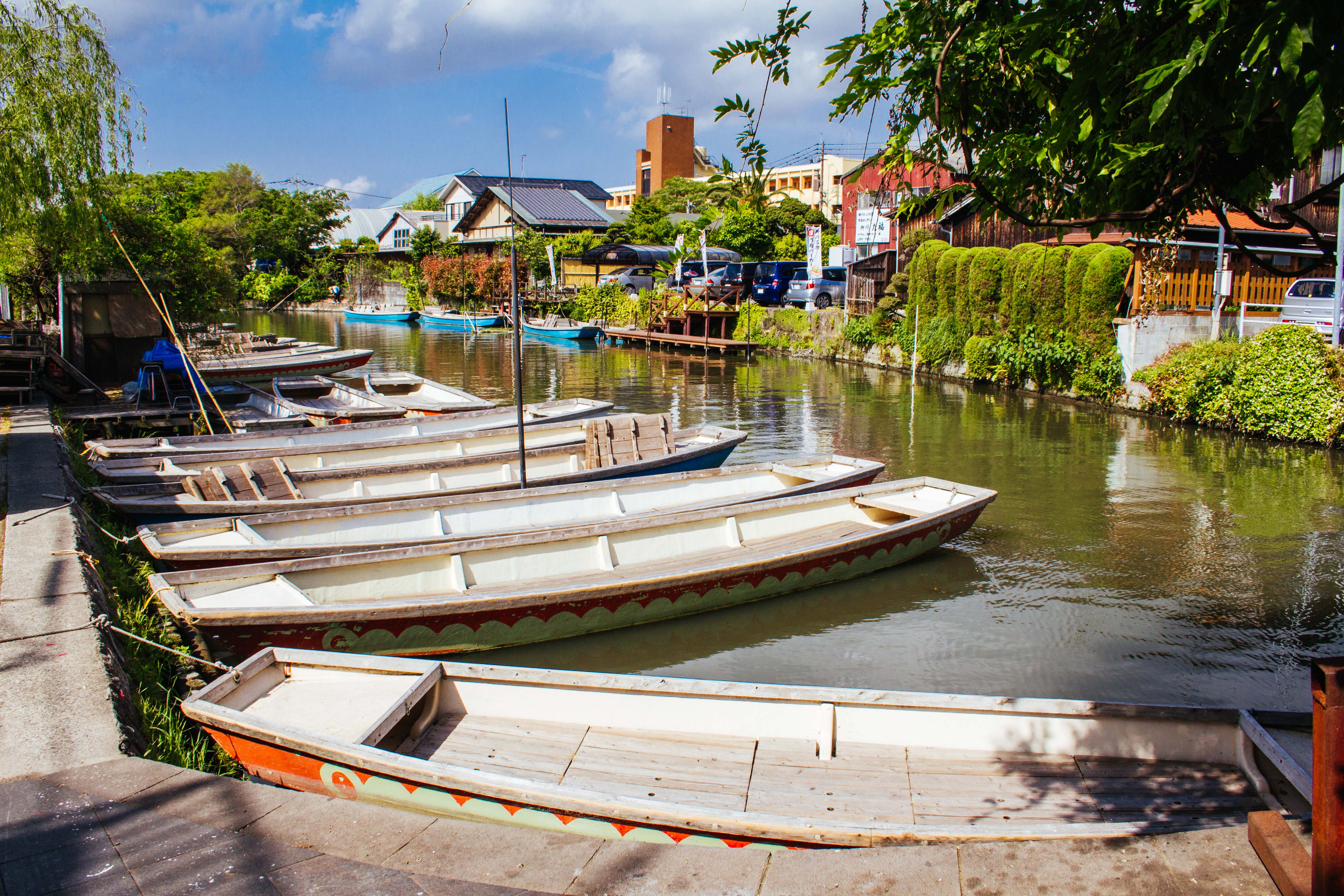 Our punting tour started at Shogetsu, a 6-minute walk from Nishitetsu Yanagawa station, and ended in Okinohata, where you can catch a free shuttle bus back to the boarding area. The ride was 4.5 km long, passed through the old castle’s water gate, and took about 70 minutes. We even got a discount on the 1600円 ticket price.

On the last stretch of the tour, a sign for eel burgers caught our eye. Although steamed unagi is Yanagawa’s signature local dish, Austin and I had already tried the Japanese delicacy in its more traditional form in Hitoyoshi. This time, we thought, why not give the fast food version a go.

The fresh, homemade burgers, served at a small café in the back of a local gift shop, turned out to be a quick and delicious lunchtime snack. Half an hour later, we were off on our way to Kumamoto. 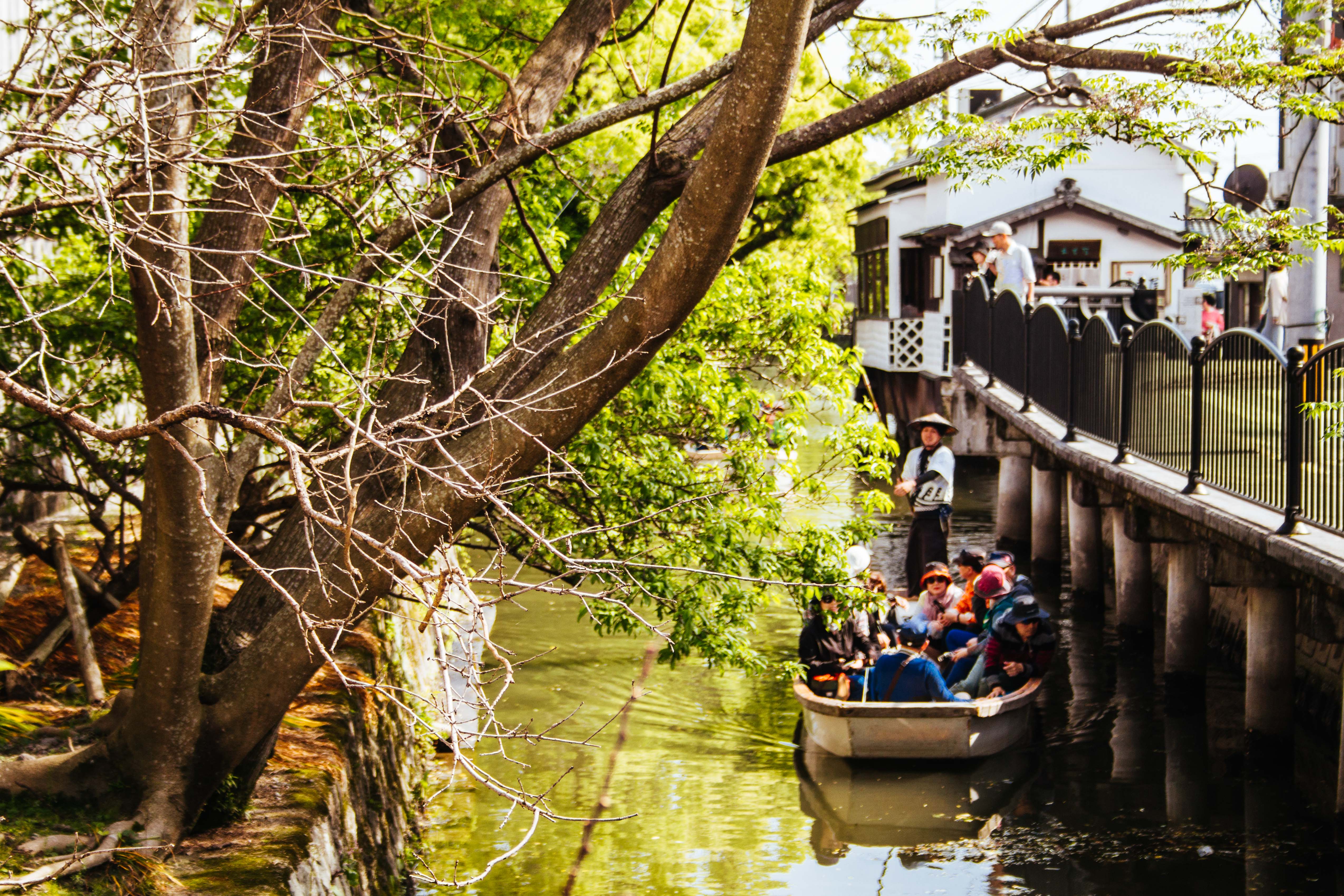 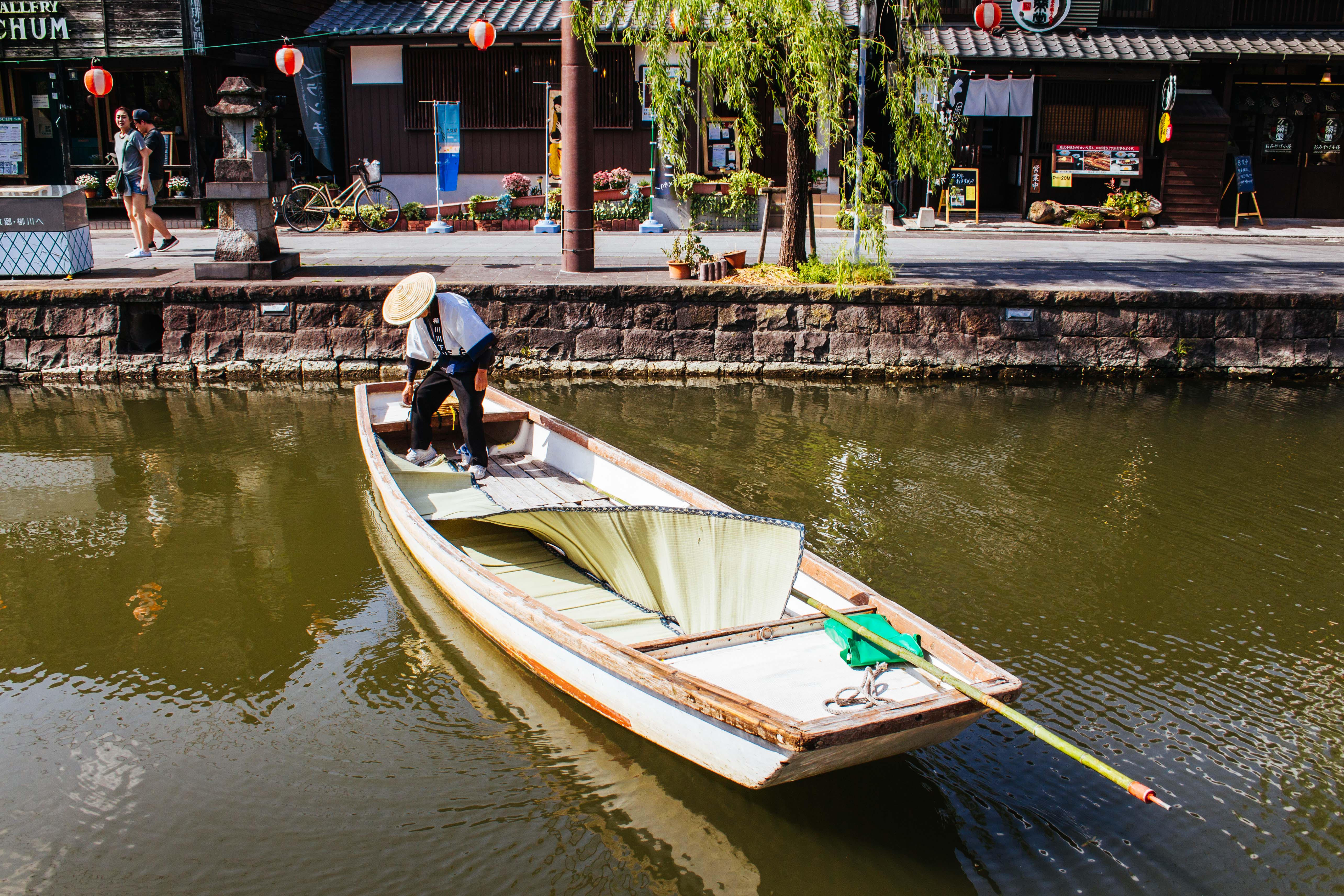 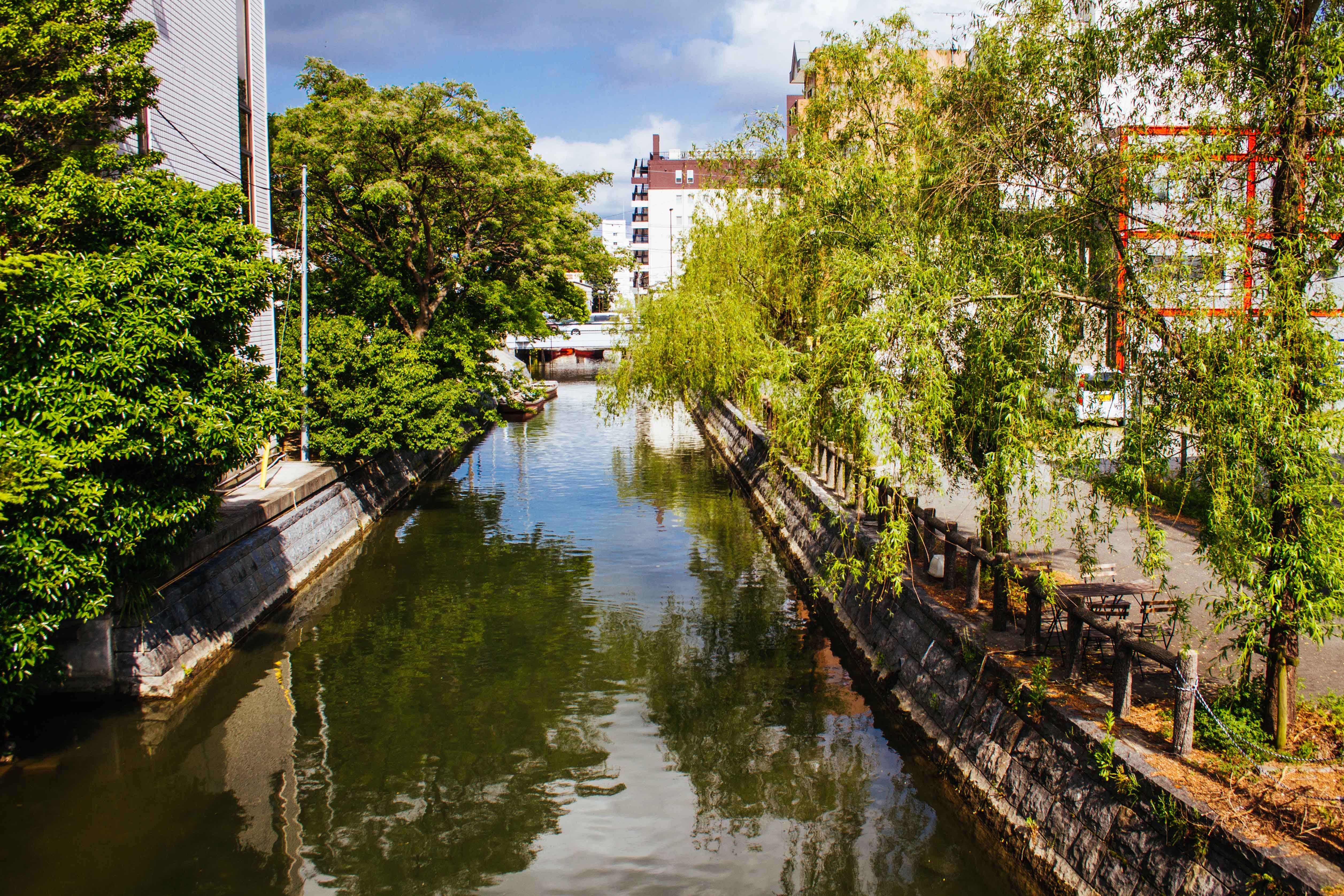