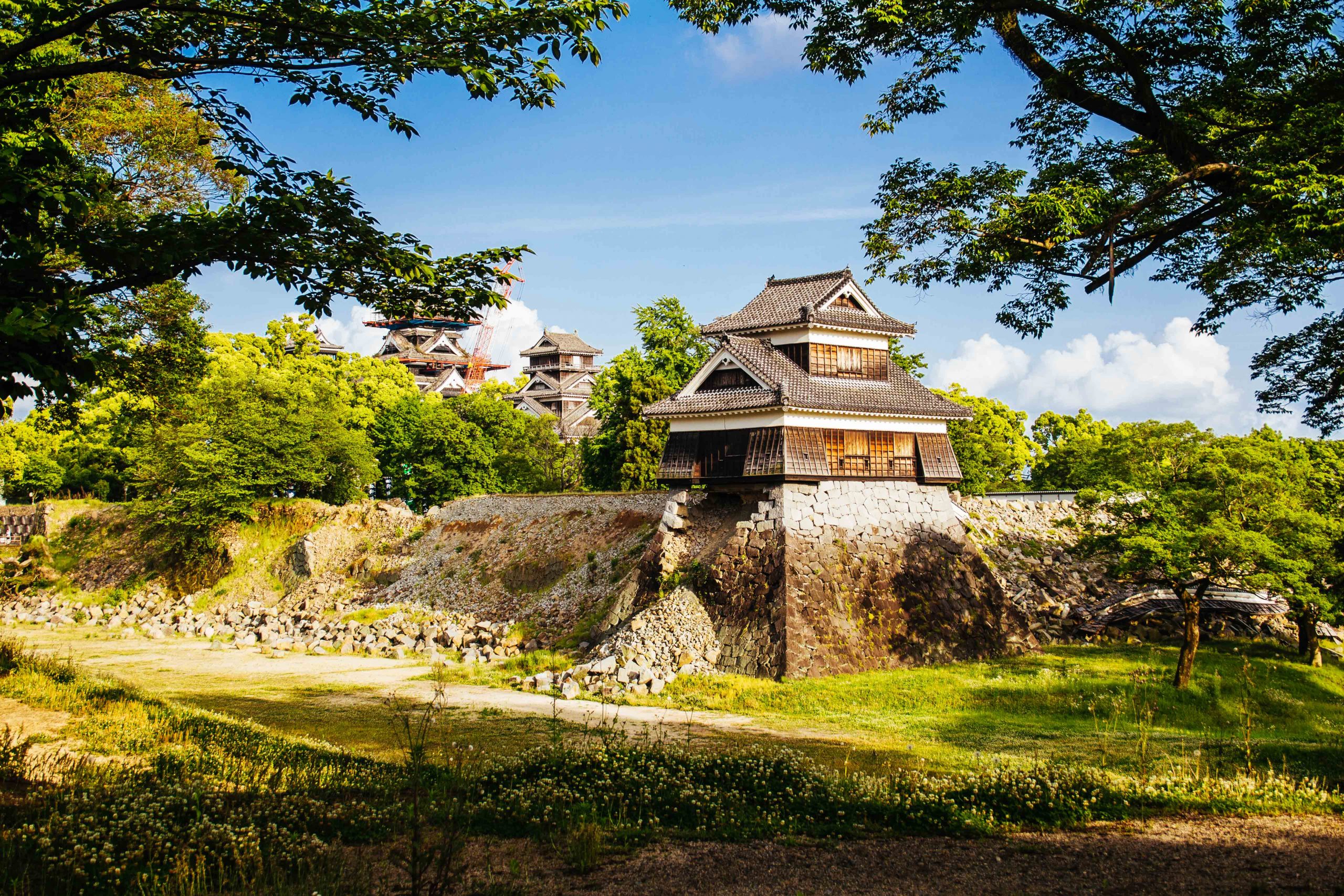 “Please visit Kumamoto Castle,” my colleague urged when I told her we’d be driving through Kumamoto City on the way back from Nagasaki during the Golden Week holidays. The popular tourist attraction is Japan’s third-largest castle, after Osaka Castle and Nagoya Castle. It is especially well known for its expansive grounds, numerous buildings, and more than 500 cherry trees that make it a popular hanami spot in the spring.

Since last year, Kumamoto-jō has become even more iconic after surviving extensive damage during the April 2016 earthquakes that killed 50 people and left thousands injured and trapped under collapsed buildings.

As a result of the tremors, roof tiles fell from the castle, the outer walls collapsed, and the foundation was damaged. Several of the castle’s shachihoko ornaments, an animal from Japanese folklore hung on roofs to protect buildings from fire, were also destroyed. 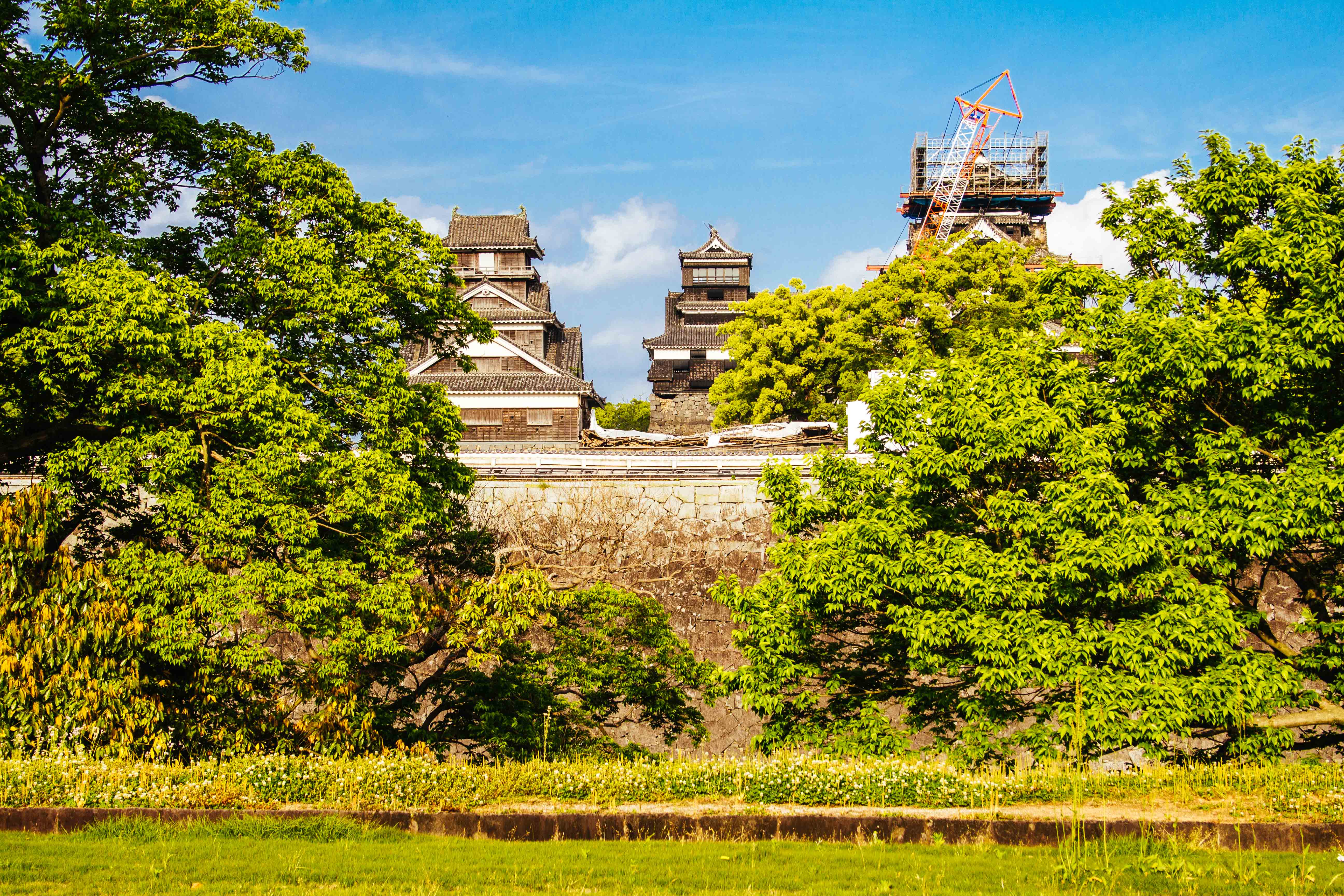 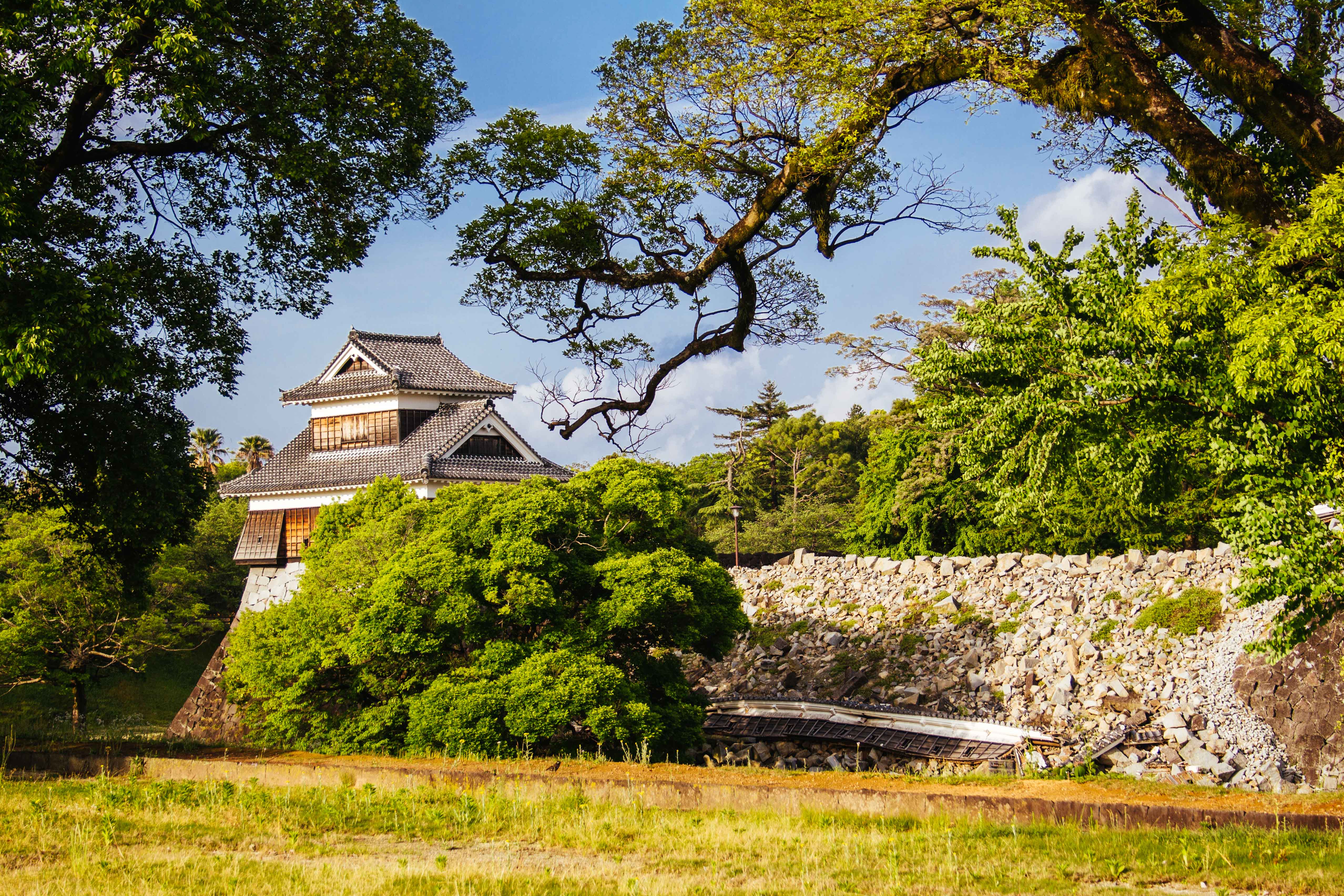 Kumamoto Castle was built in the early 1600s by the feudal lord Kato Kiyomasa, who was an ally of Tokugawa Ieyasu and fought in the Battle of Sekigahara. He was awarded the fief around Kumamoto where he began construction of the castle.

With 49 turrets, 29 gates and extensive defensive measures, including portholes for dropping stones and boiling water on invaders below, the castle is one of the most impregnable ever built in Japan; it has never successfully been attacked.

The castle site measures approximately 1.6 km (0.9 mi) east to west and 1.2 km (0.7 mi) north to south. According to Japan Visitor, over 100 wells were built on the castle grounds to provide its inhabitants with water, and Kato also planted camphor and gingko trees to provide firewood and nuts, in case of siege. 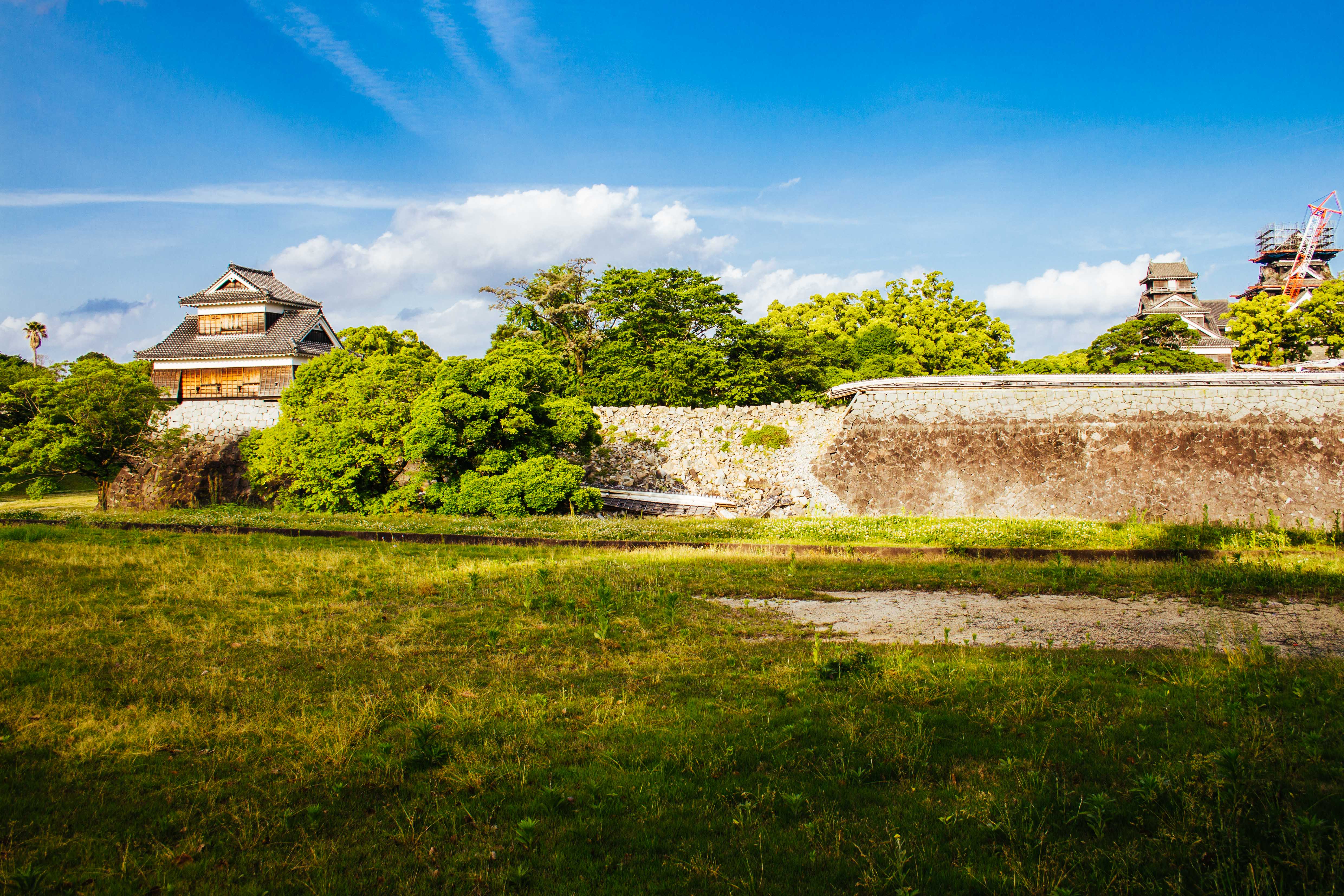 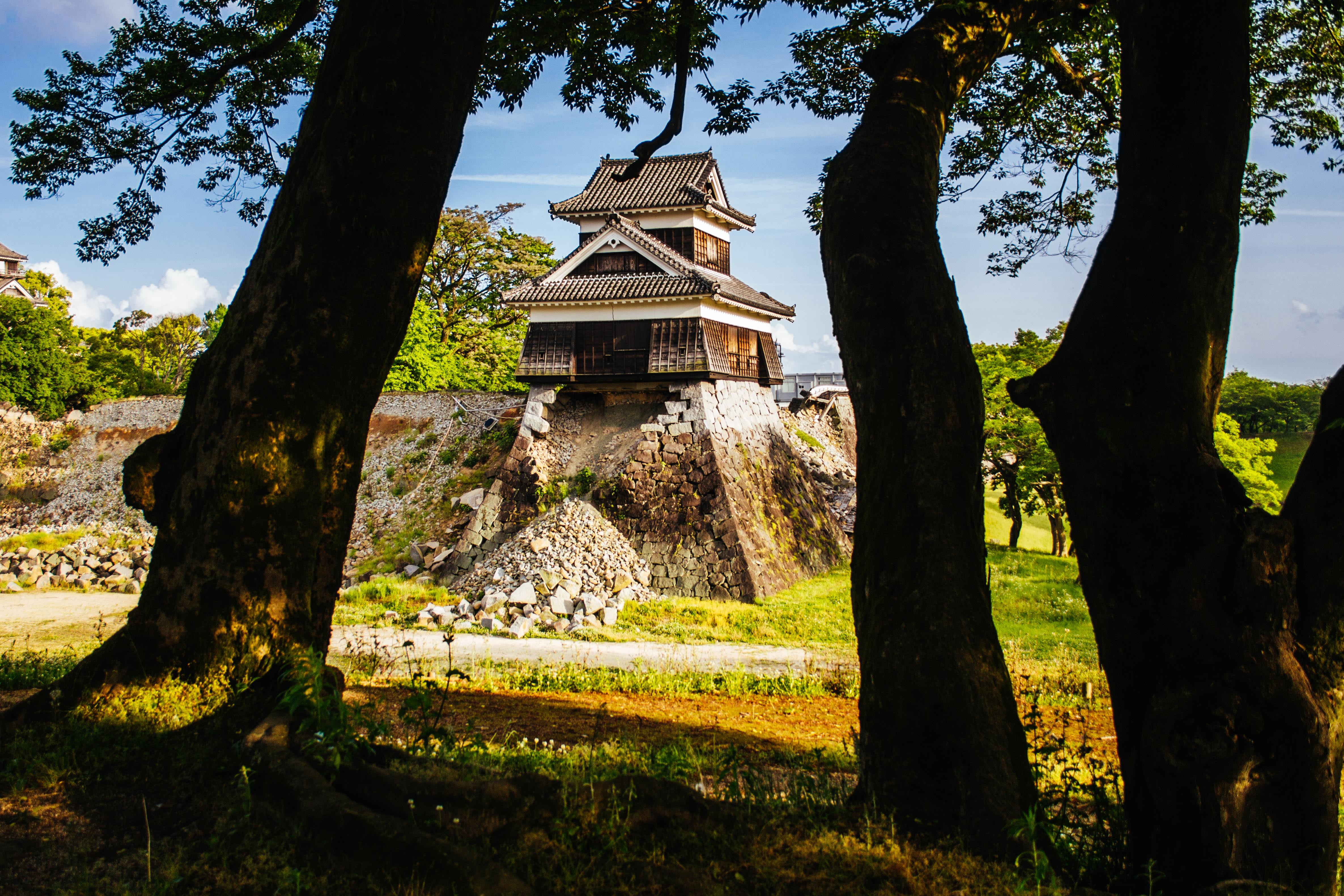 The tatami mats, too, were stuffed with vegetable stalks instead of rice. To keep insects at bay, persimmon tannin and pine soot was used to stain the wood of the castle.

Kato’s architectural talent caught the attention of Tokugawa Ieyasu, who employed him to help build Nagoya Castle. The Kato clan later fell out of favor with the lord’s regime, however, and Kato’s son was eventually replaced by Hosokawa Tadatoshi whose family went on to rule the castle until the Meiji period.

During the Satsuma Rebellion of 1877, the main keep and connected tower, and other buildings around the castle, were burned to the ground. But even then, the castles distinctive stone walls – featuring steep curves designed to keep invaders out – were not damaged. 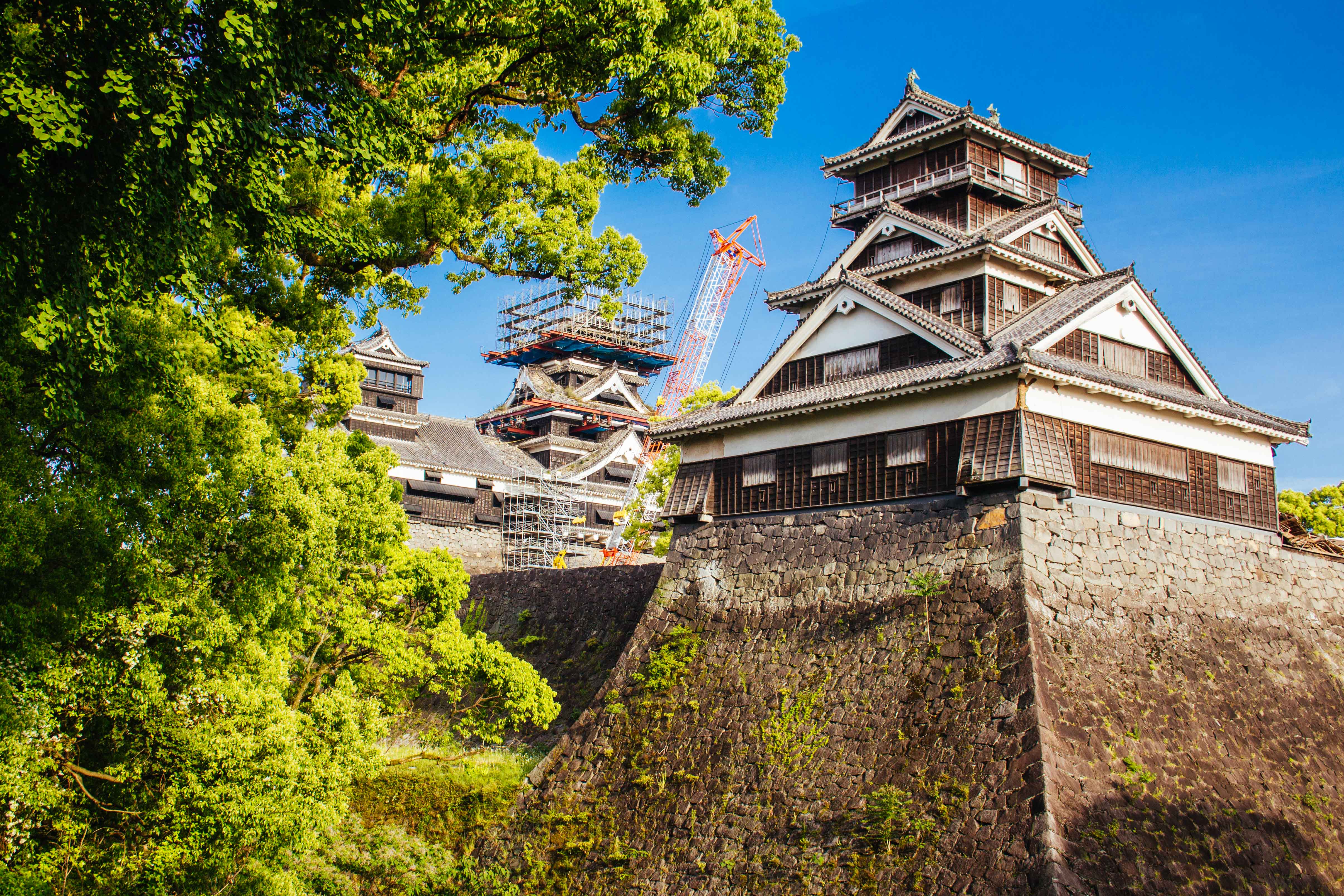 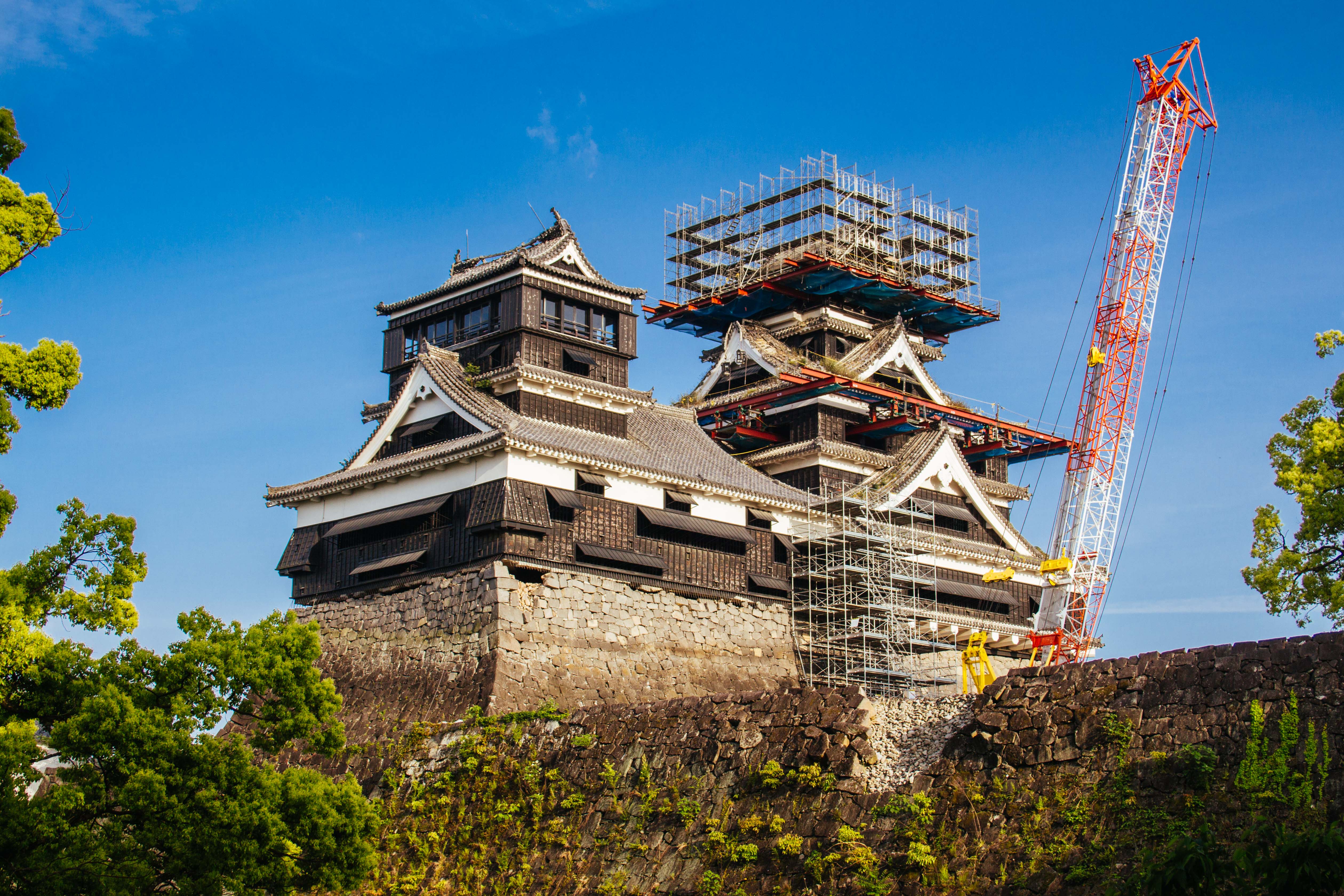 During the earthquakes, the walls collapsed in numerous places. To repair this, the Japan Times reports, “Numbers will be allocated to each and every stone that is removed so they can be replaced in the same spot like a jigsaw puzzle.” The painstaking process is expected to take up to 20 years to complete. In the meantime, the inner grounds of the castle are closed to the public.

Still, Kumamoto-jō continues to attract visitors who can view it from around Ninomaru Park and Kato Shrine. The 14th floor of the nearby Kumamoto City Hall also has an observation deck with views of the castle that visitors can enter for free.

We arrived in the late afternoon, after a short stop in Yanagawa for a river cruise. I was immediately taken aback by the sheer size of the grounds, and of the trees that line the pathway to the castle’s entrance. 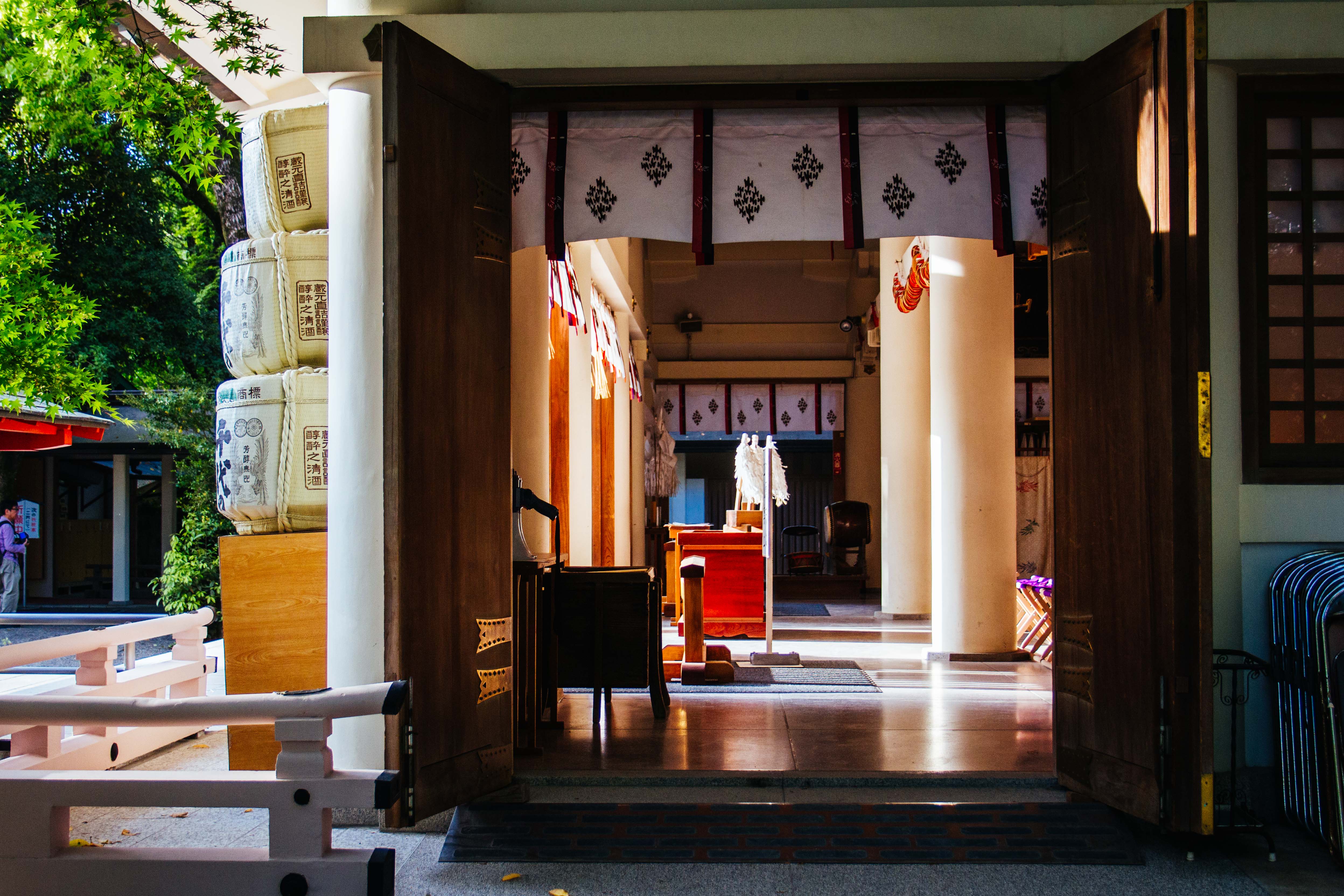 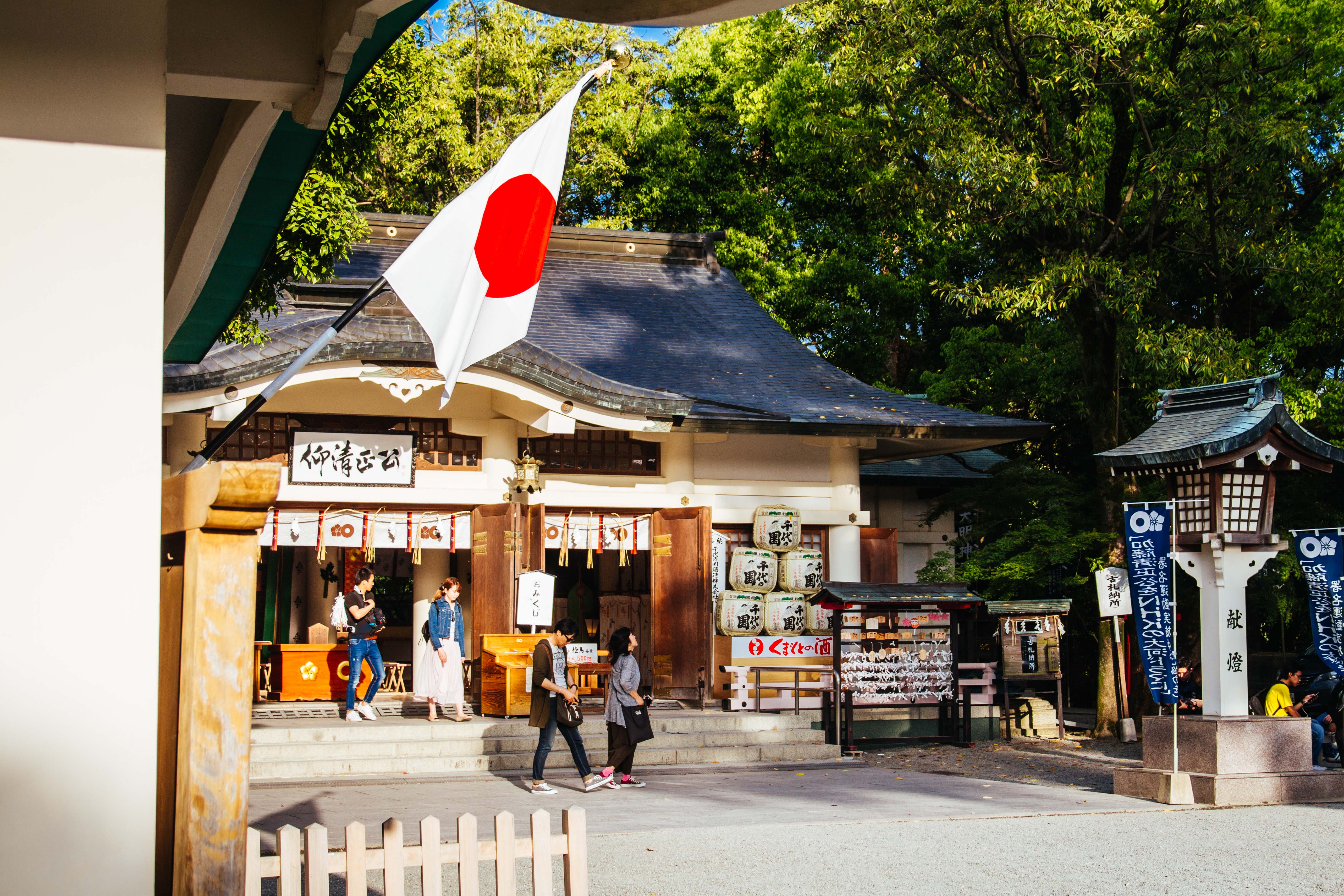 From the area surrounding the castle, the main keep is visible, supported by a steel frame, and surrounded by tower cranes. As you move towards the entrance to Kato Shrine, you can see more closely the damage to the walls. And while it’s impressive that you can even see as much as this, it’s a real pity that there is no longer access to the Honamaru Goten Palace, or the underground passage that leads to the building.

The city of Kumamoto has promised to consider allowing tourists into certain parts of the castle area as construction progresses. For a couple of days in March and April this year, for example, the Miyukizaka area was opened to the public for cherry blossom viewing.

Despite the limited access, the castle is definitely still worth a visit, and if it helps with incentive, there’s an unbelievably good tonkatsu restaurant just 15 minutes away that serves the best pork cutlet I’ve ever had in all my years in Japan. 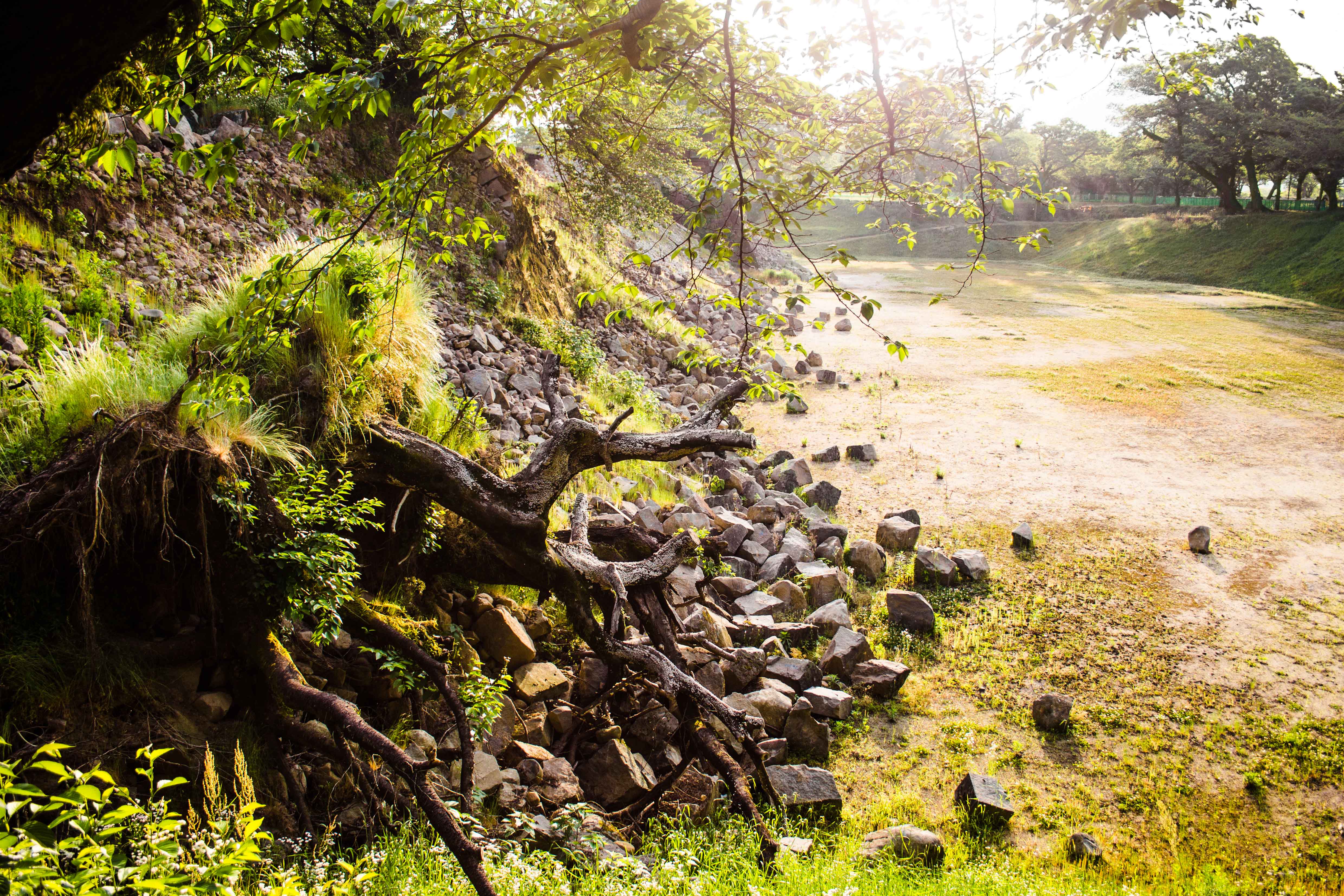 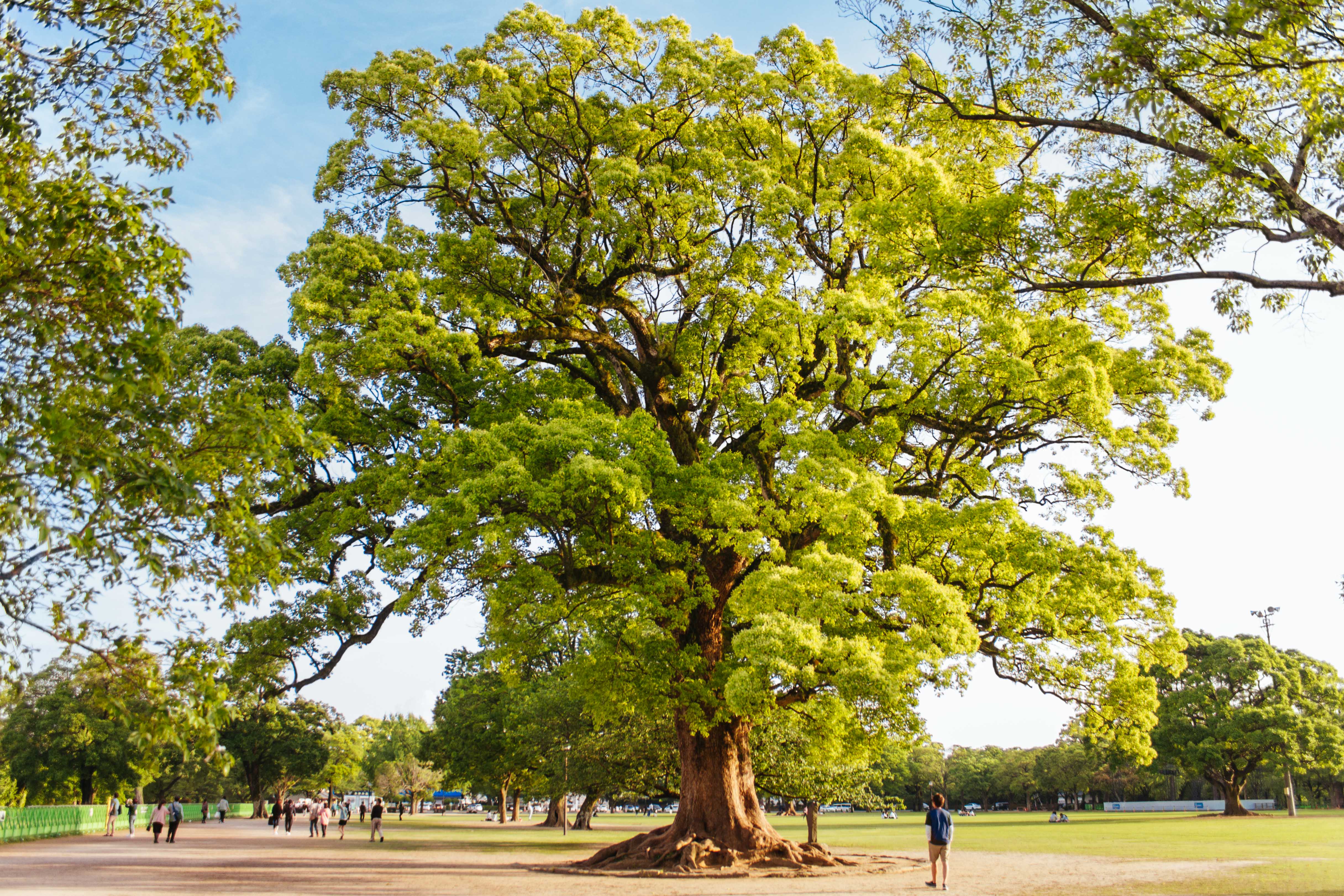 For updates on accessible areas, click here.
Kumamoto Castle is a 10 minute taxi ride, a 15 minute tram ride, and a 45 minute walk from Kumamoto Station.