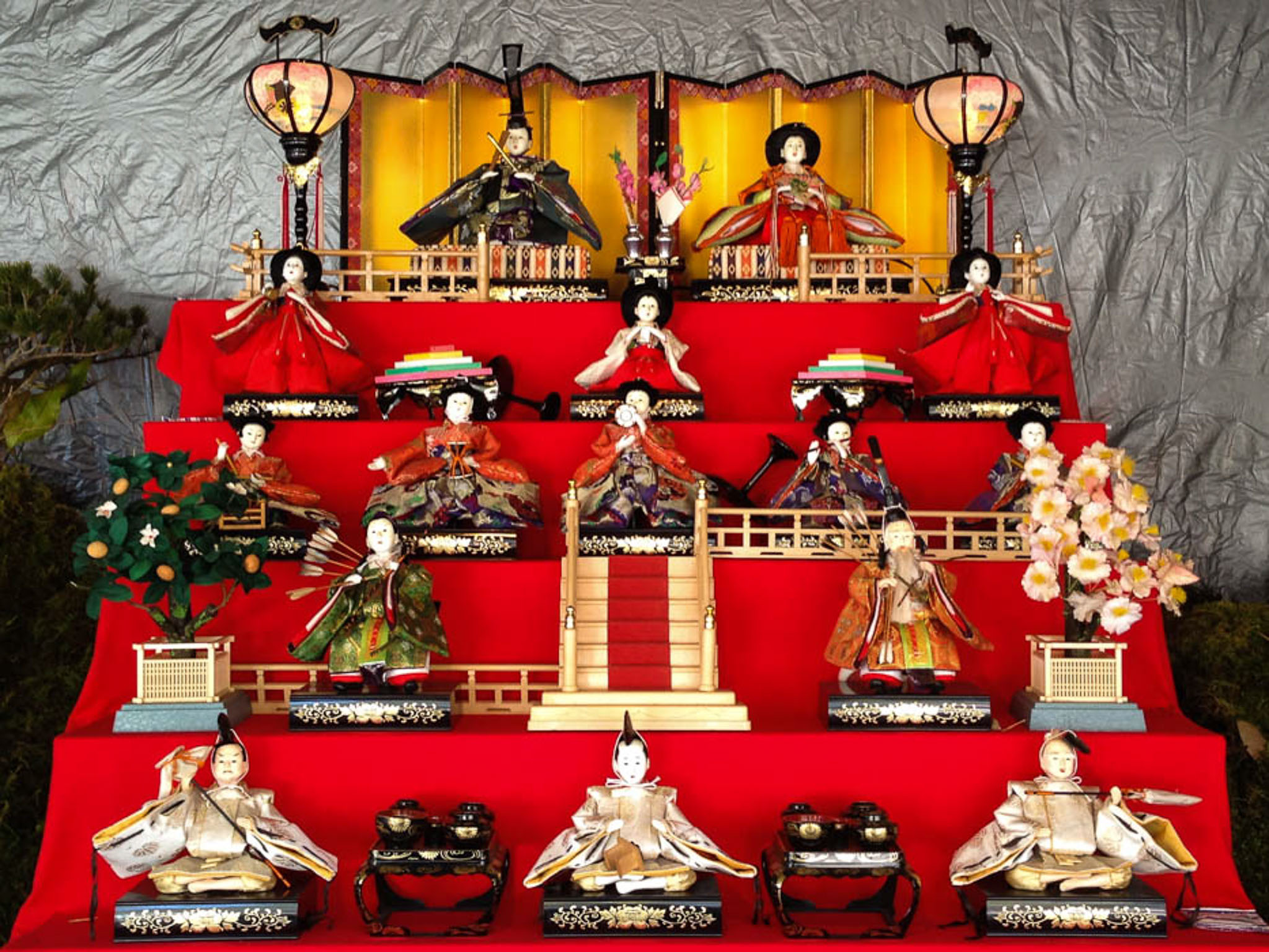 At this time of year, special dolls are set out on displays in homes and shops around Japan for the annual hinamatsuri (doll festival) celebration on March 3.

I’ve always been a teddy bear person, but I had a couple of porcelain dolls as a child. I was always careful to be extra nice to them when we played, in the way that you might appease a person with crazy eyes because, well, they might cut you. In ancient Japan, it was believed that dolls can indeed possess evil spirits.

In a practise known as hina-nigashi (doll floating), straw dolls were set afloat down the river to drive bad forces away. Over time, this evolved into the modern day hinamatsuri festival, which now celebrates the health and happiness of young girls.

The dolls on display represent the different members of the Heian imperial court and are usually set out on 7 tiered platforms covered in red felt. On the top tier are the emperor and empress dolls, followed by 3 court ladies, 5 musicians, 2 ministers, 3 samurai, furniture and tools, and ox-drawn carriages. But if you visit Aya Town, you can see a unique display called hina-yama (doll mountain).

Dating back to the Edo period, hina-yama is thought to have originated from decorating the okuzashiki (back parlor of traditional houses) with flowers and rocks from the surrounding mountainside in honor of the gods. The hina-yama display reproduces this using driftwood, flowers, rocks and moss. 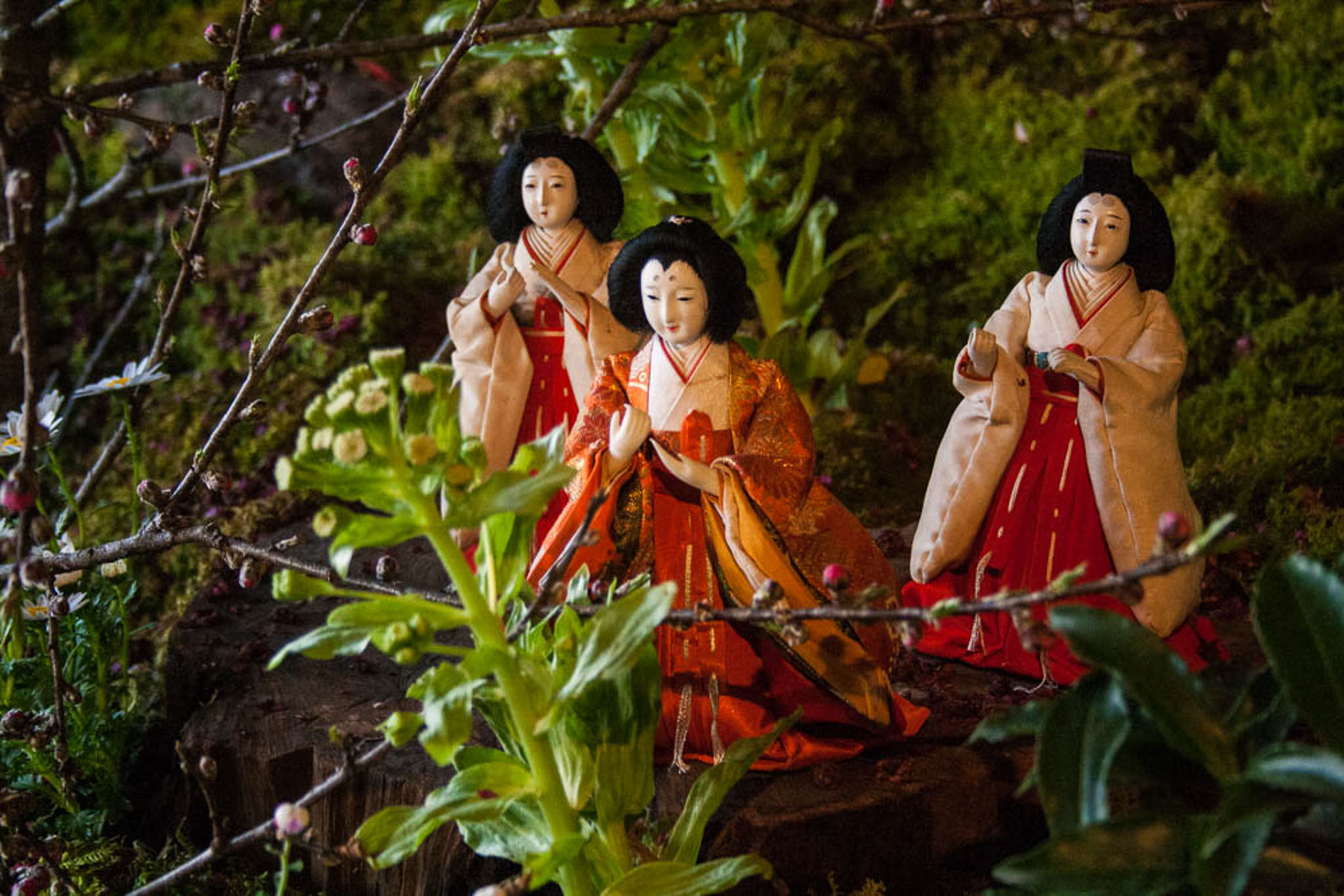 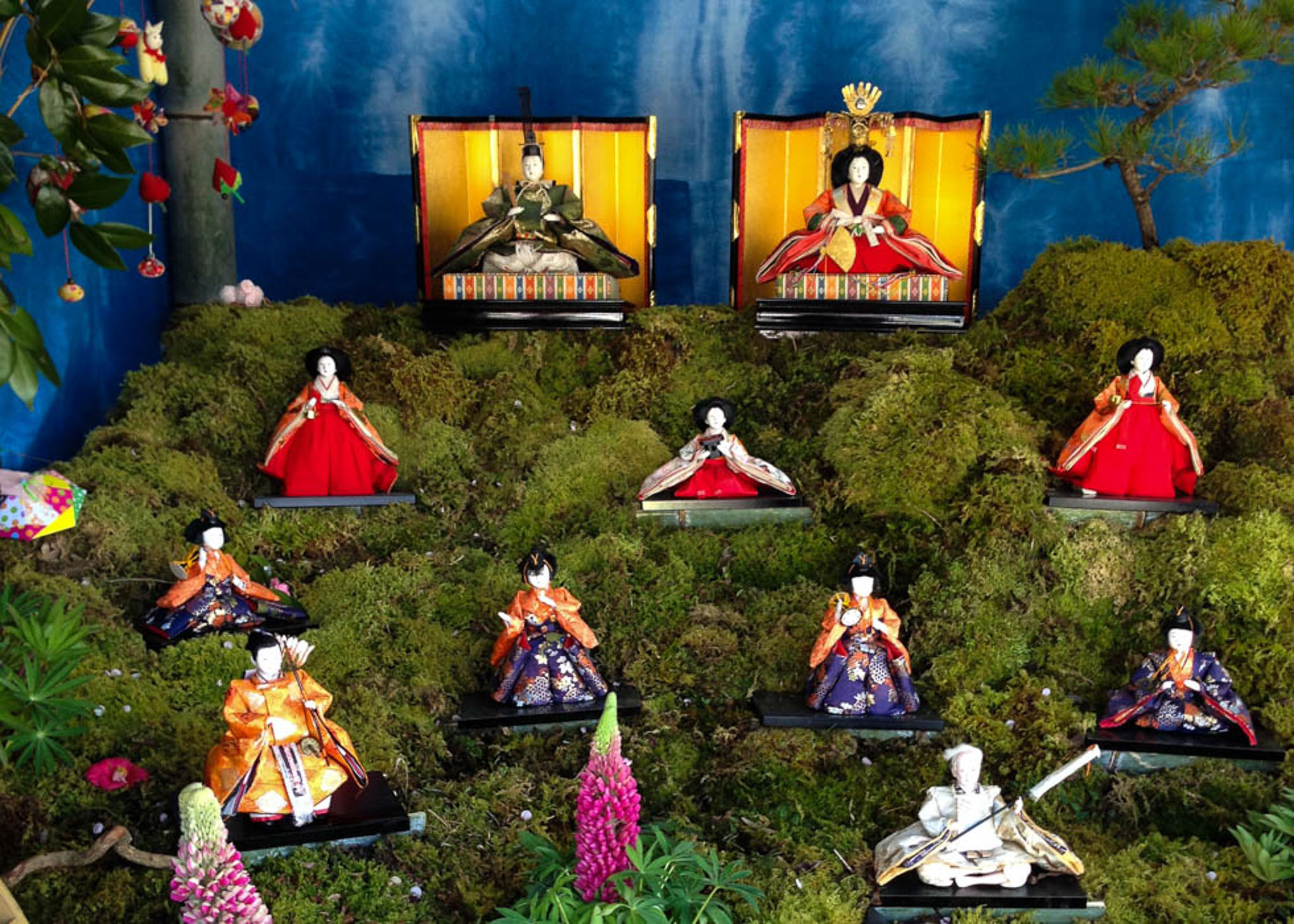 Since I was off on Friday (in lieu of the school’s graduation ceremony this weekend), I decided to head out to Aya and check it out.

For absolutely no money, you can see about 20 different displays scattered throughout the town. At any one of these, you can also pick up a map which, if you collect enough stamps, enters you into a draw for a prize. 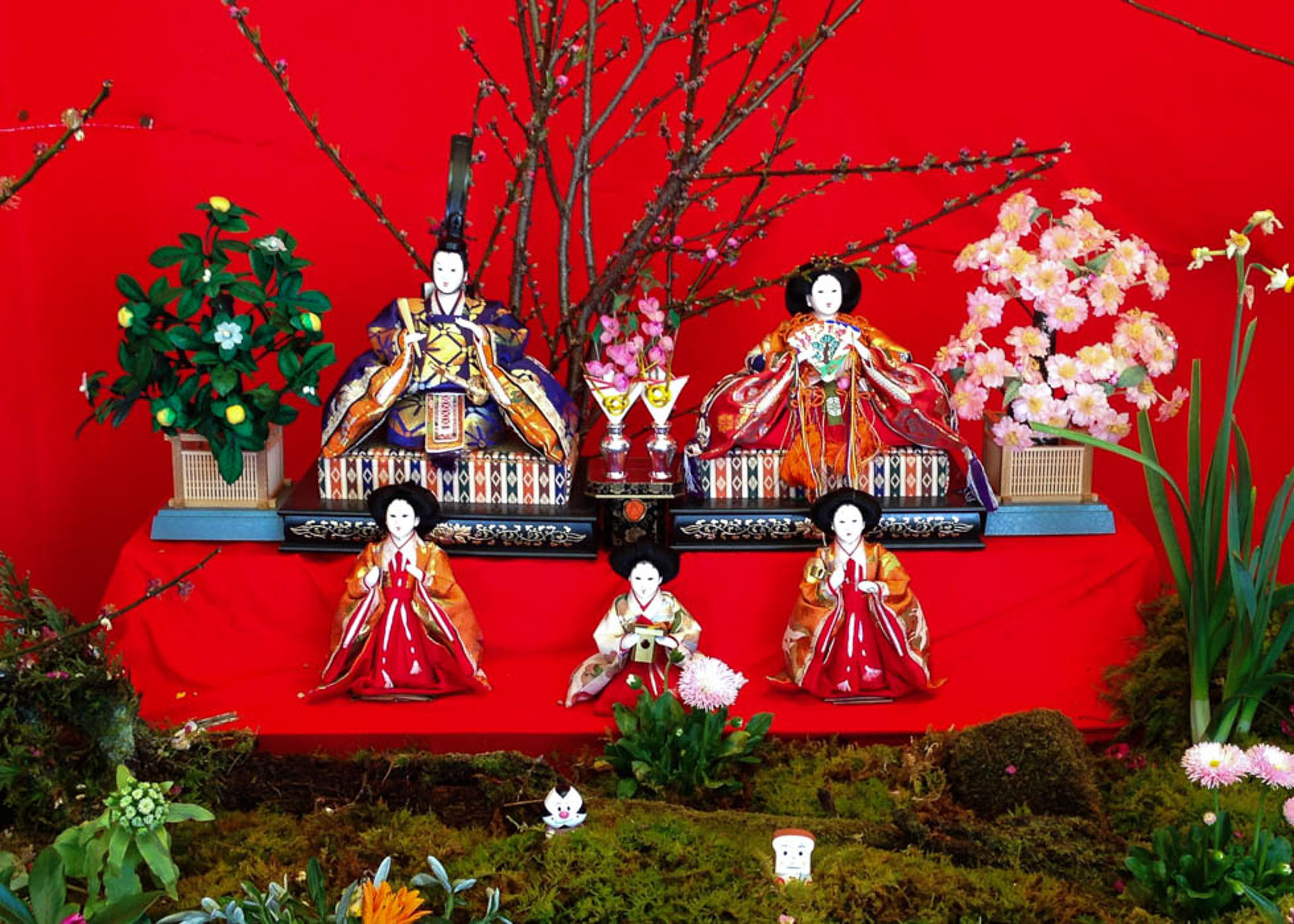 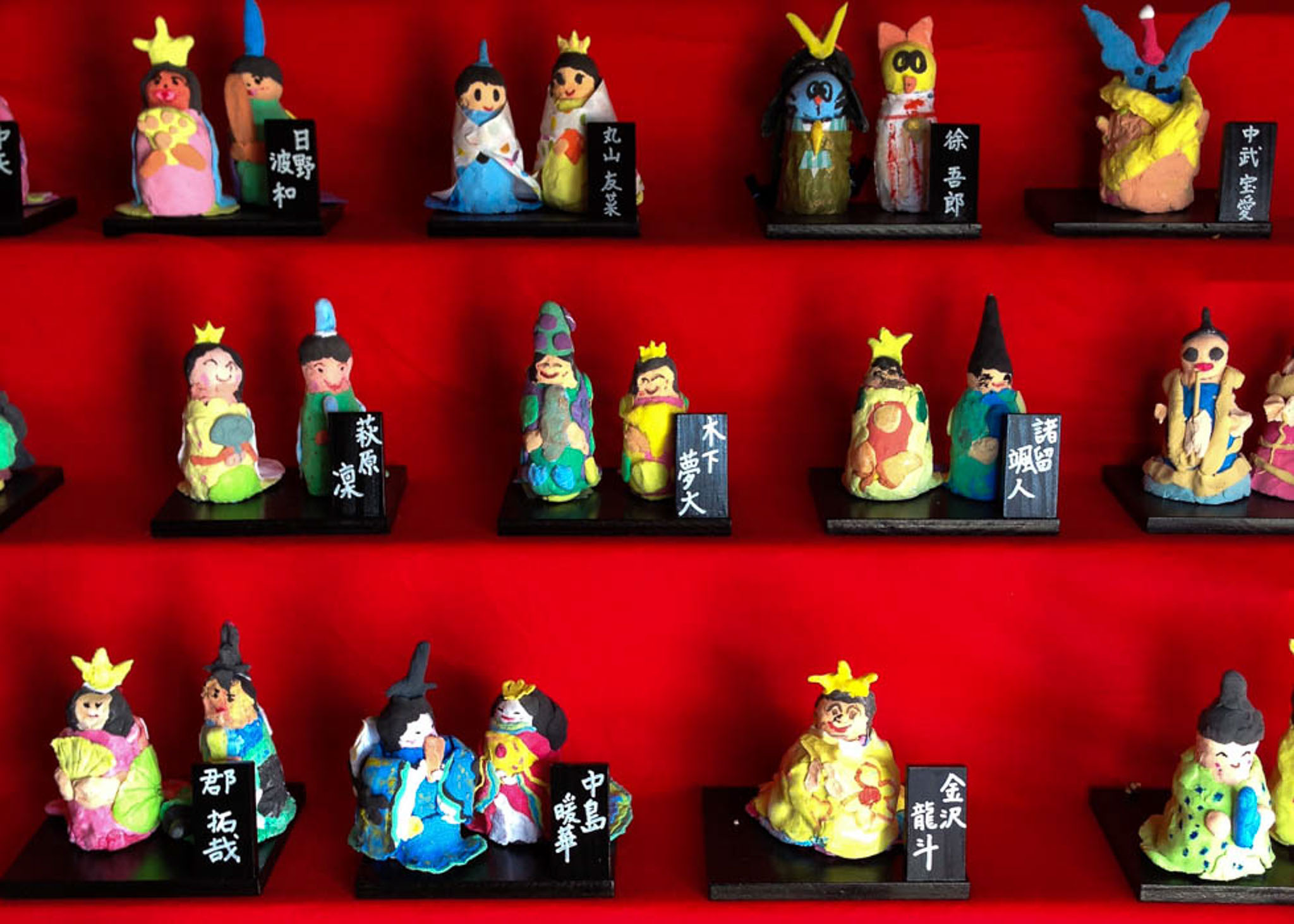 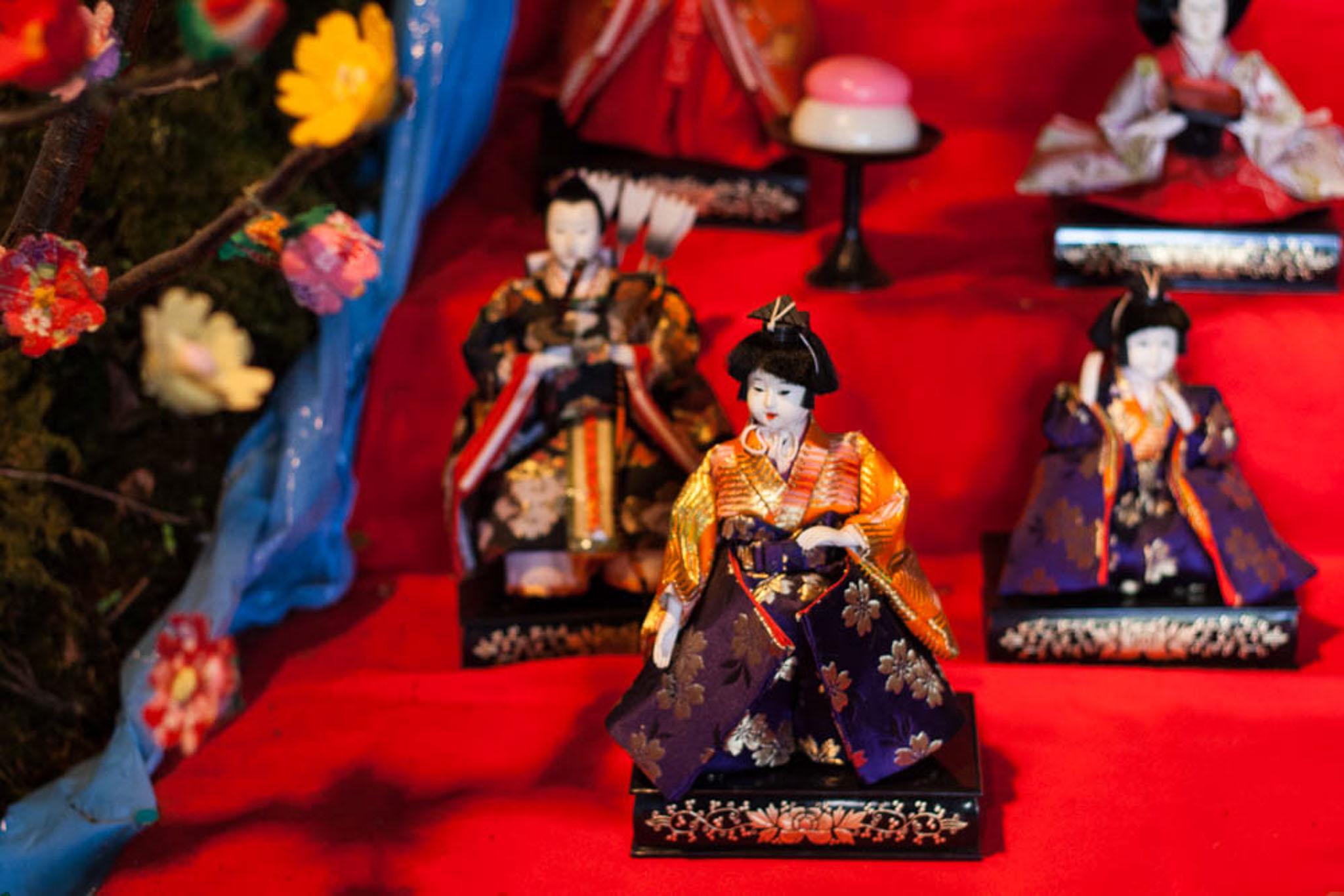 Since I had already been to Aya and explored a few of the outlying locations on the map, I decided to stick to the main shopping district in town.

It was like a little treasure hunt looking for the dolls – some of them are out on display in storefronts and others hidden in the doorways of cafes and restaurants. There may not be an entrance fee, but the sights and smells convince you to open your wallet anyway. 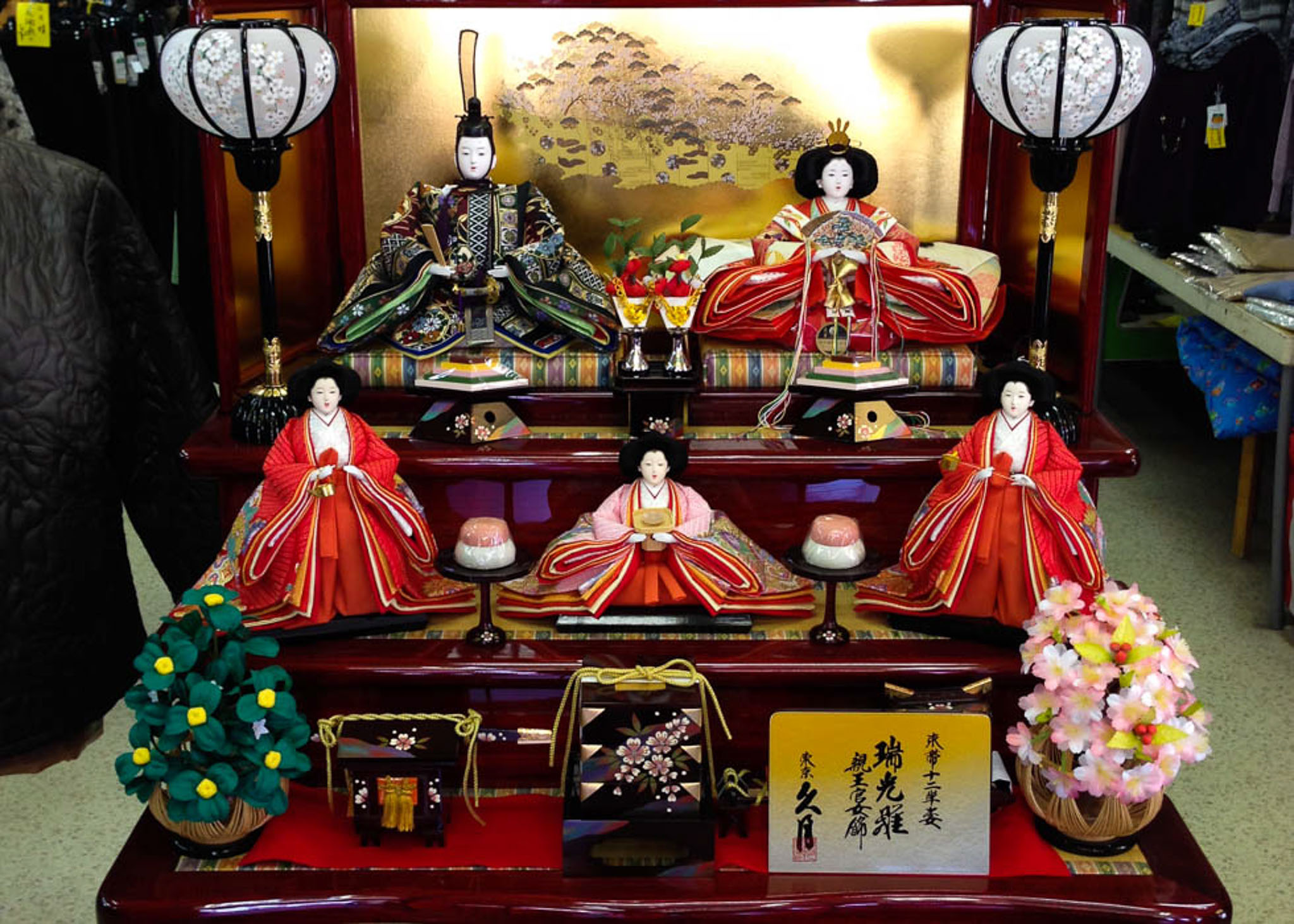 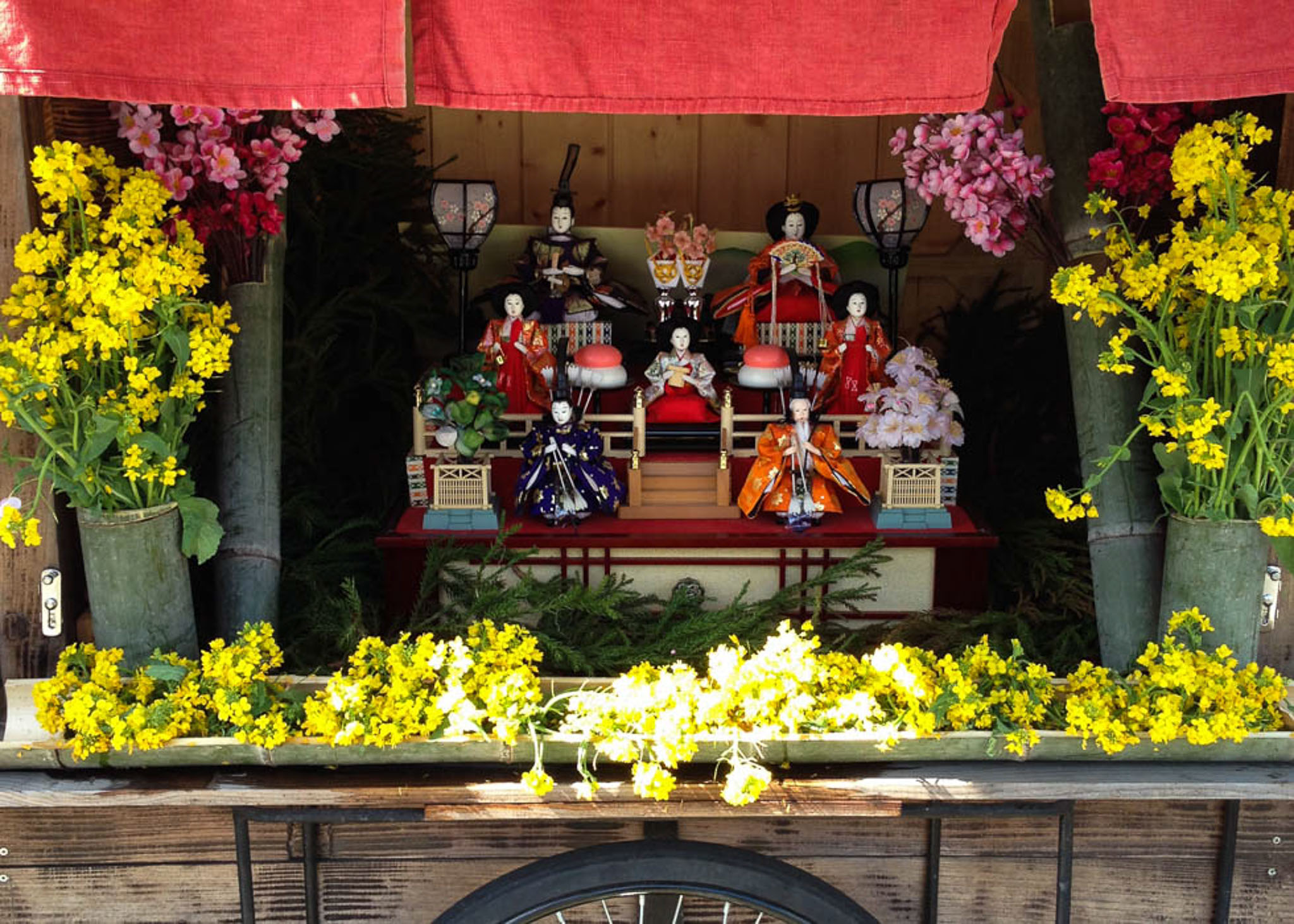 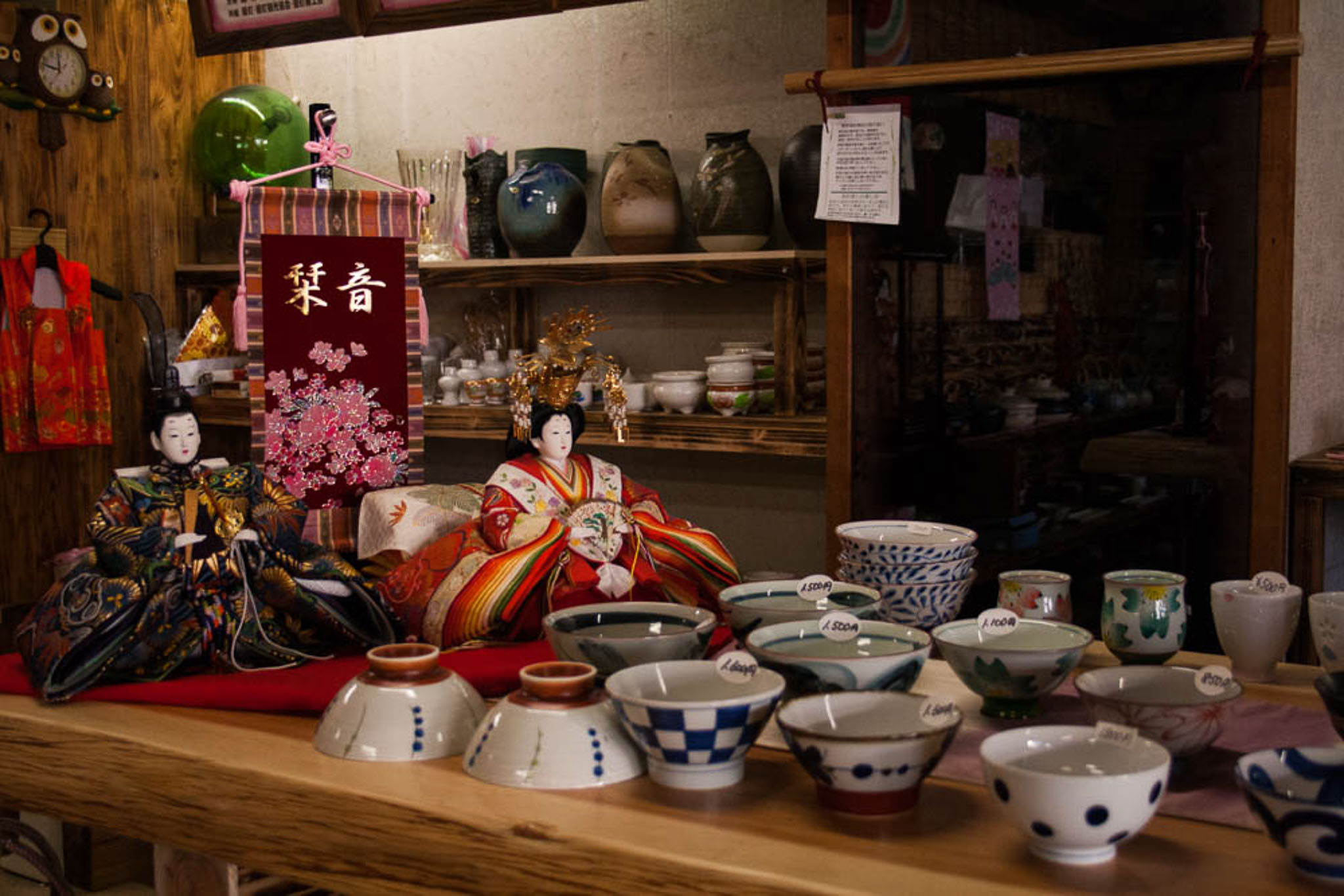 It was lunch-time then, and in need of refreshment, I popped my head into a quirky little coffee shop called That’s Bock Ring. Ask for Moo-chan – his coffee is a dream!

Across the road from Bock is a farmer’s market that sells every green leafy vegetable imaginable, local baked goods and the world’s biggest selection of hyuganatsu fruit. For a small town an hour away, it certainly has it’s perks.

I walked up and down the other side of the street after that, finding more displays and shops to explore. After three hours of doll-hunting, I had seen enough and was ready to drive back home.

As I passed the last hina-yama display on my way back to the parking lot, I took a good, long hard look at the dolls. Sitting twinkling in the sunlight, they didn’t seem so creepy after all. But ask me to spend the night with one and my answer is still a resounding “no”. 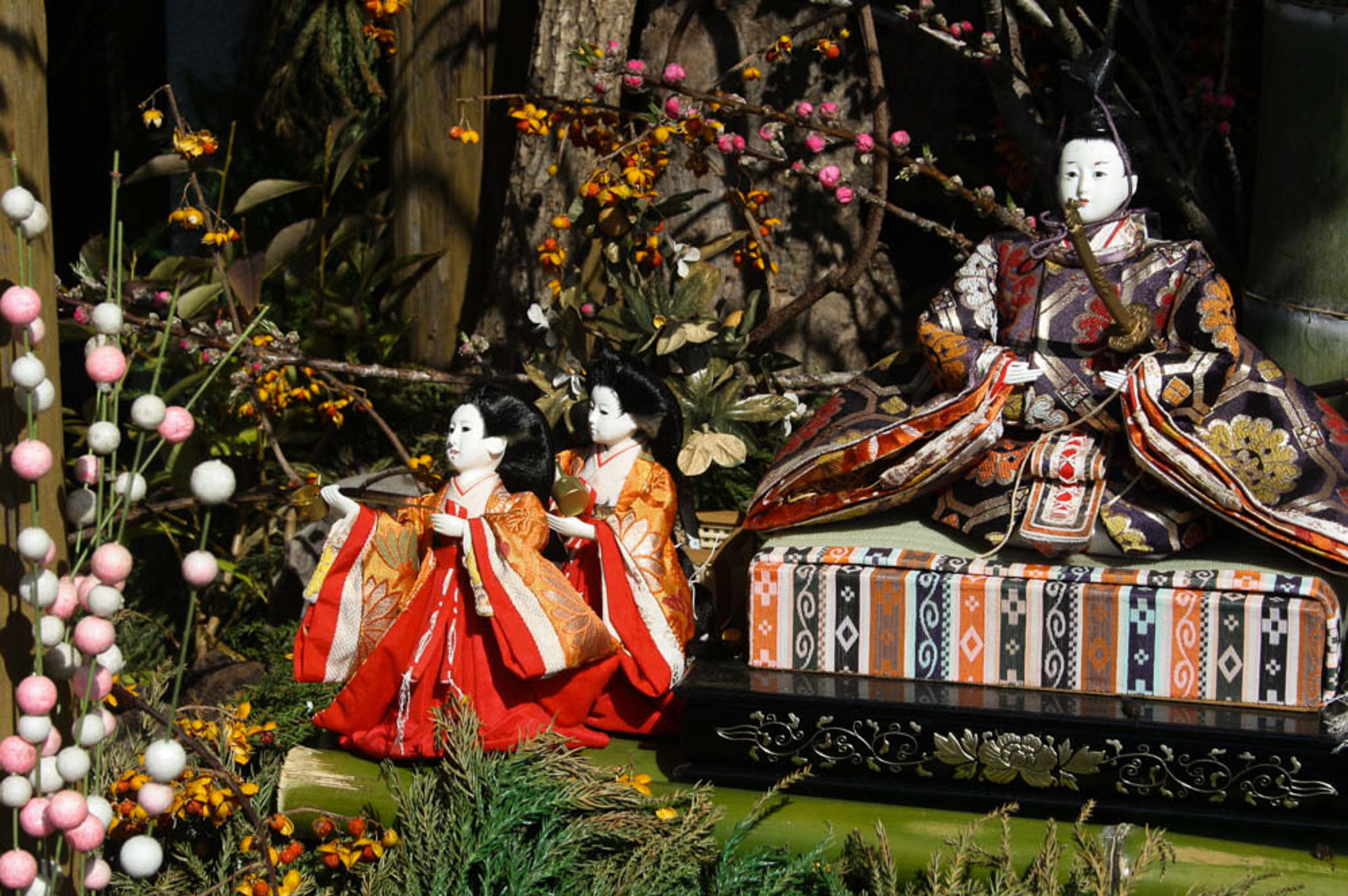