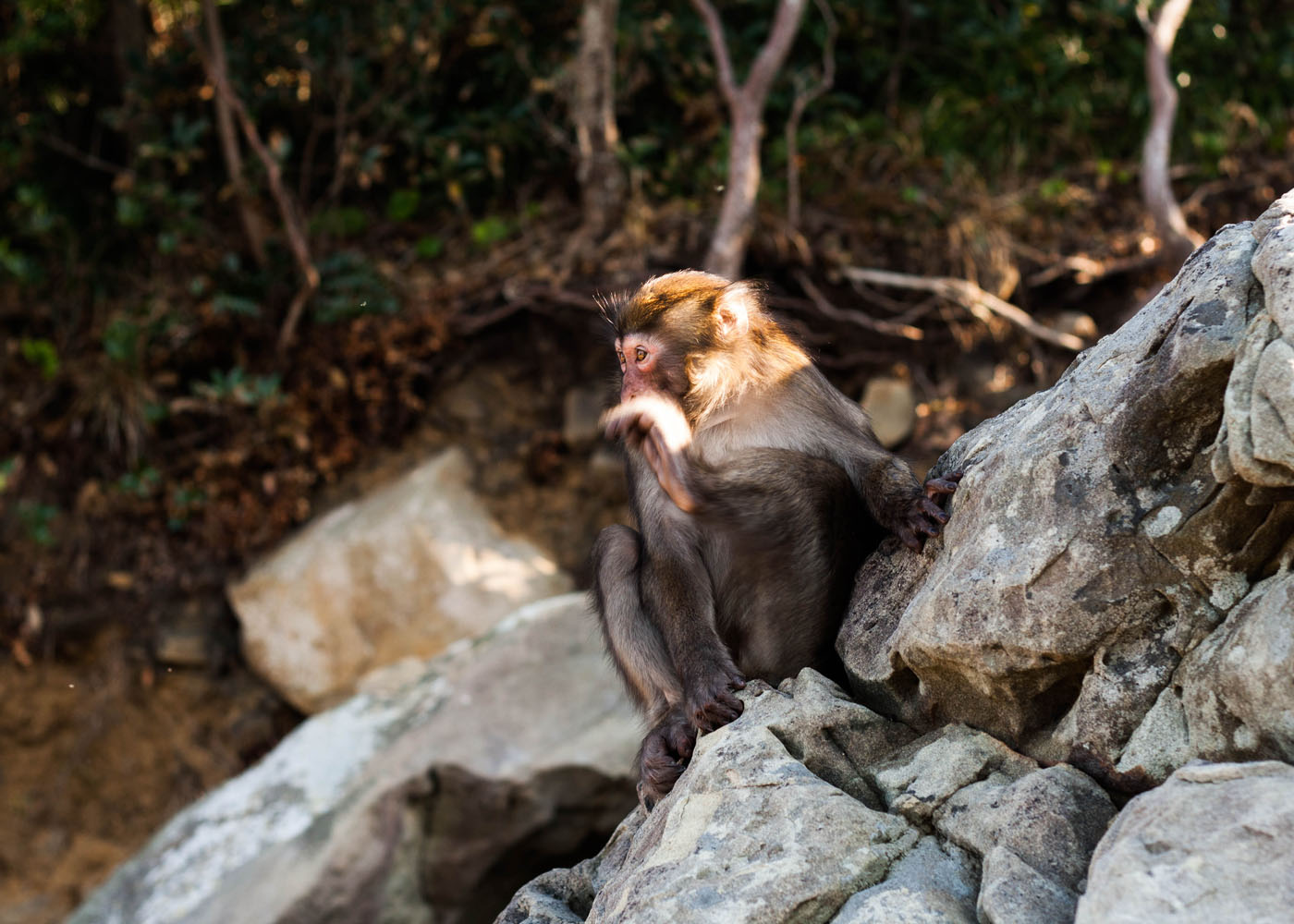 In early November, my former roommate and longtime bro, Matthew, came to Miyazaki for a visit. This is Part 2 of our road trip down the Nichinan Coast. Part 1 is here.

I chased his voice to the side of the hotel, and we fought our way through the overgrowth of what was once the garden. In a small clearing stood five or six horses, peacefully grazing for a lunchtime snack. If there was ever a reason to jump security rope, this was it.

We stood watching the horses for a while. Every now and then, I found myself looking up to the windows of the hotel. I kept imagining I would suddenly see someone staring down at me. For an abandoned place, it doesn’t feel very empty. 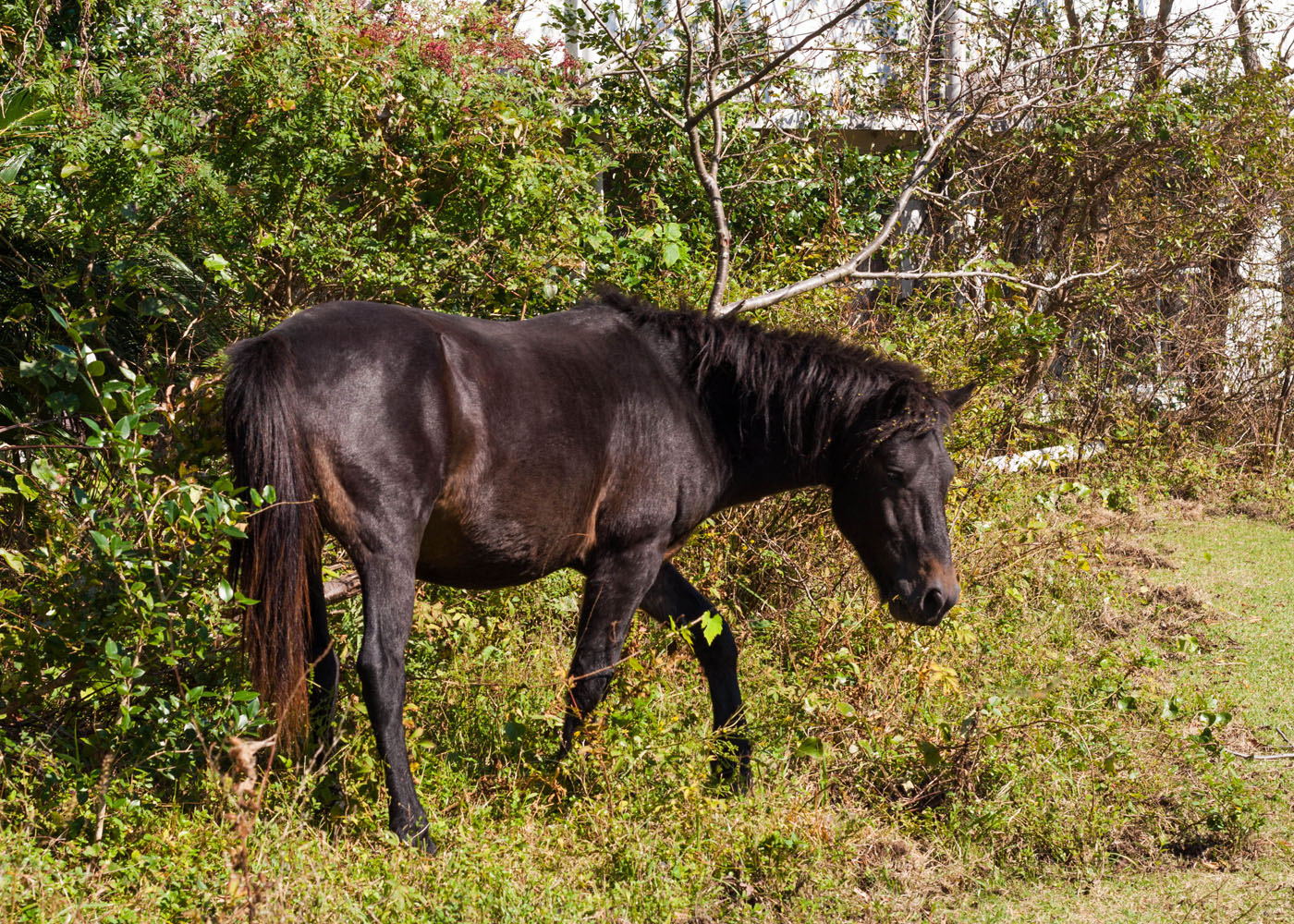 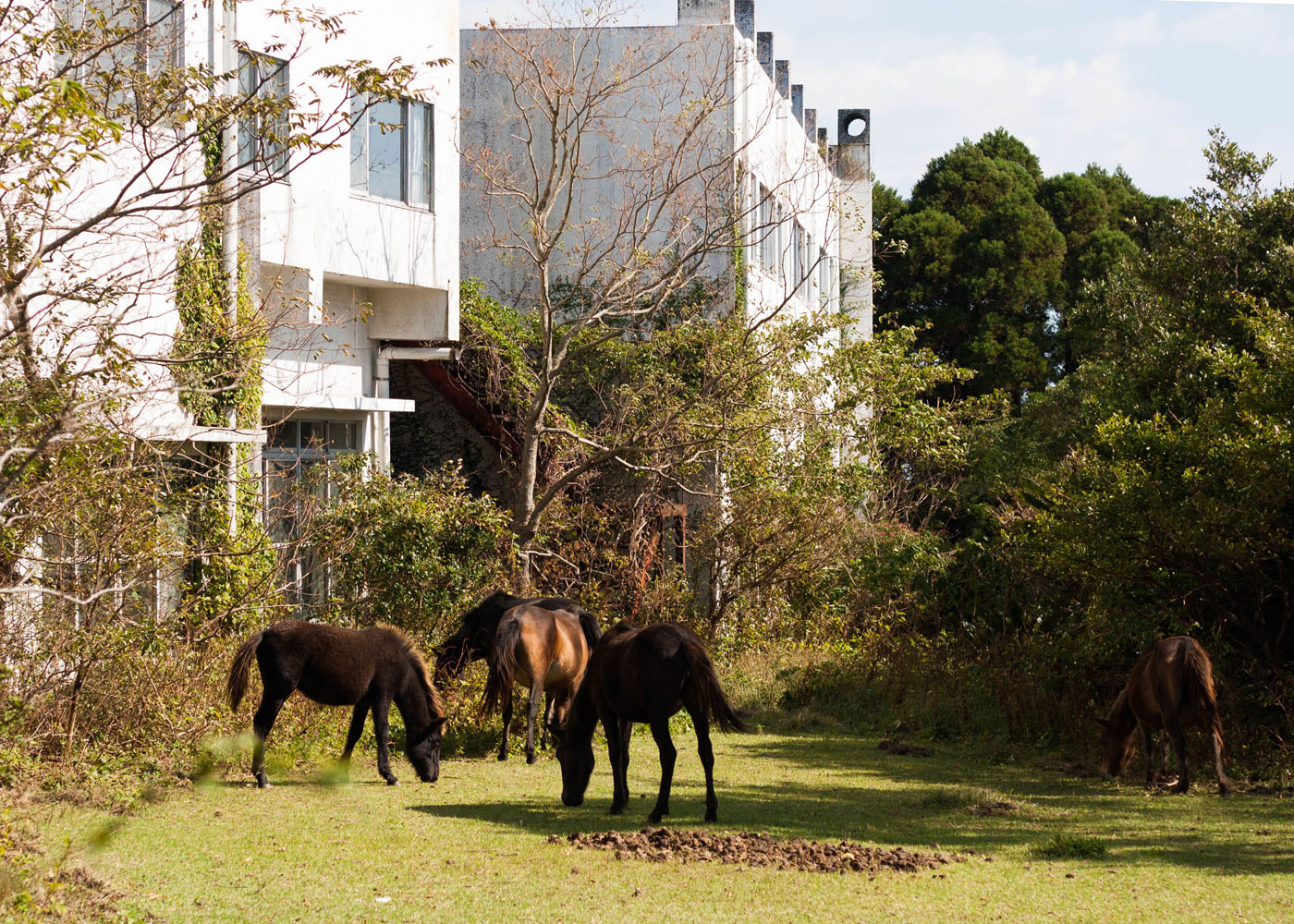 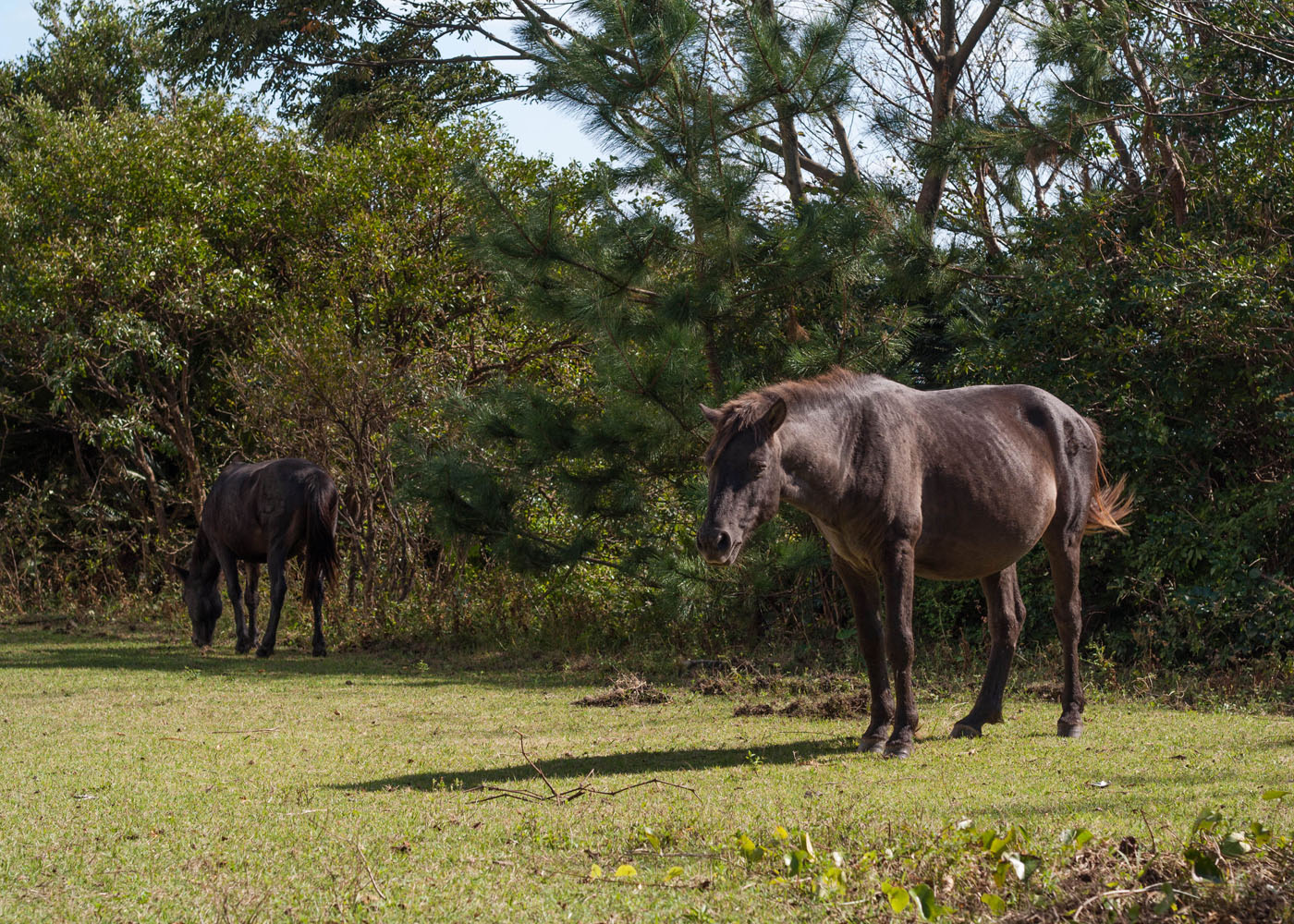 We left the horses to their meal, and returned to the side of the house. An old fridge lying on its side caught my eye. It was next to a side door and an opening of some kind leading to an underground tunnel. I edged closer to take a look.

It was pitch dark and looked menacing as hell. I could hear an eerie wailing coming from the tunnel, a practical joke played by the wind. I wondered if it led to a building we had seen behind the garden on a lower level hiding in the brush. Maybe that’s where the owners used to stay. 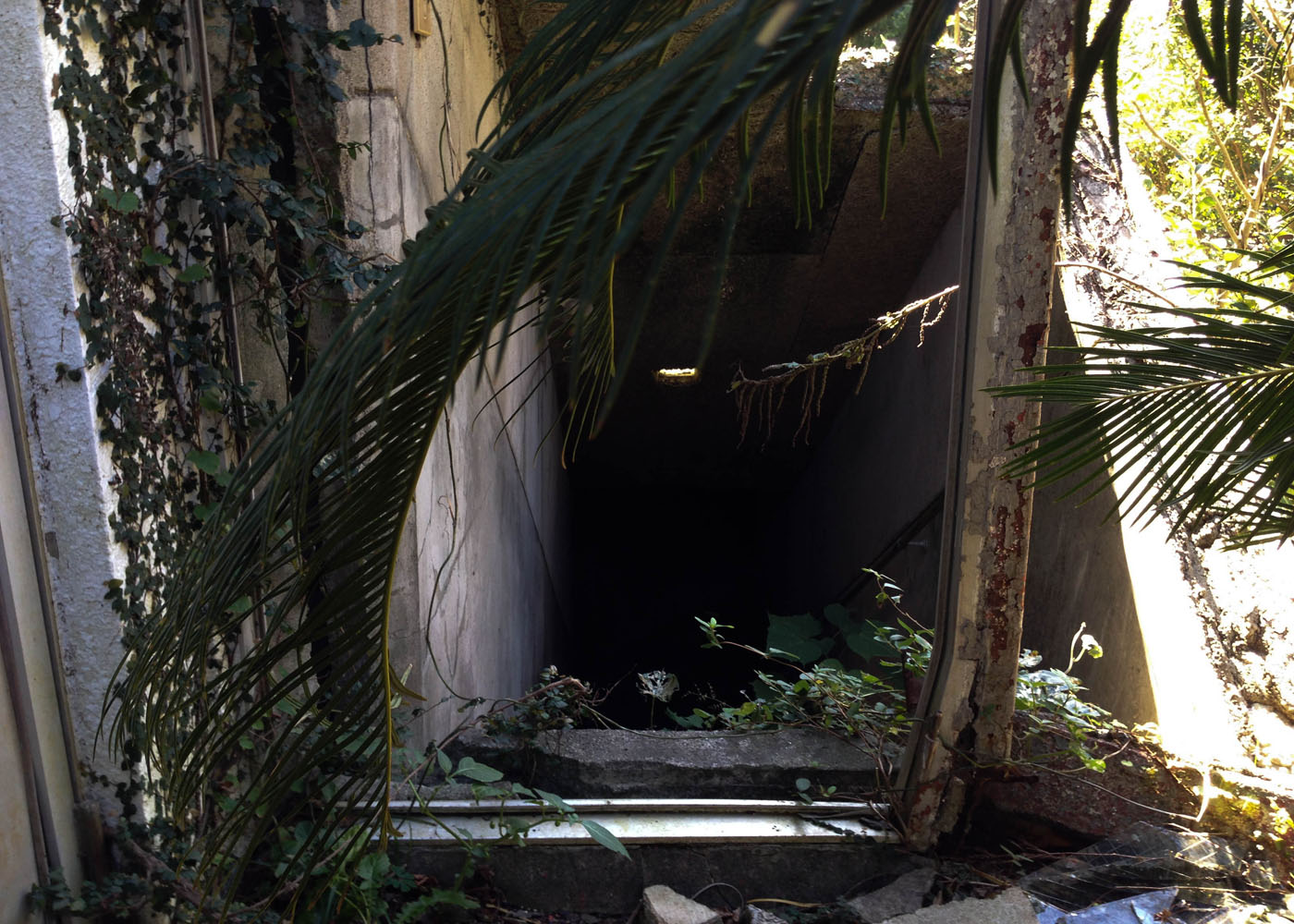 On the other side of the hotel you can get right up close to a few doors with broken windows. In what was presumably the kitchen, stacks of plates still line the shelves on the wall. The entranceway to the old parking lot is completely open, although awash with debris, crates of supplies and old furniture.

The laundry room still has a pile of linen stacked against one of the windows, and the guest bathroom is in surprisingly good shape. It’s as if everyone left after work one day and just never came back. 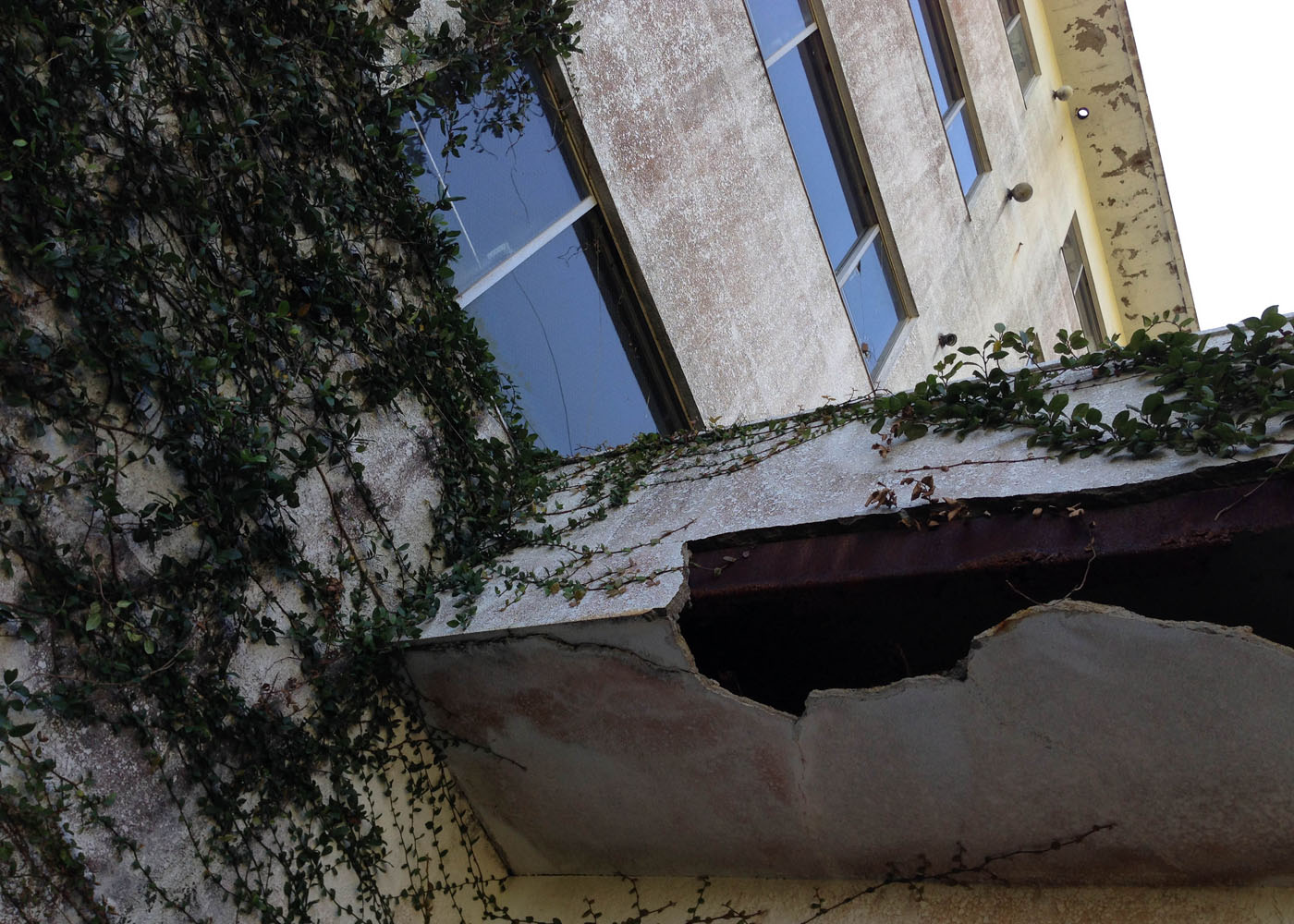 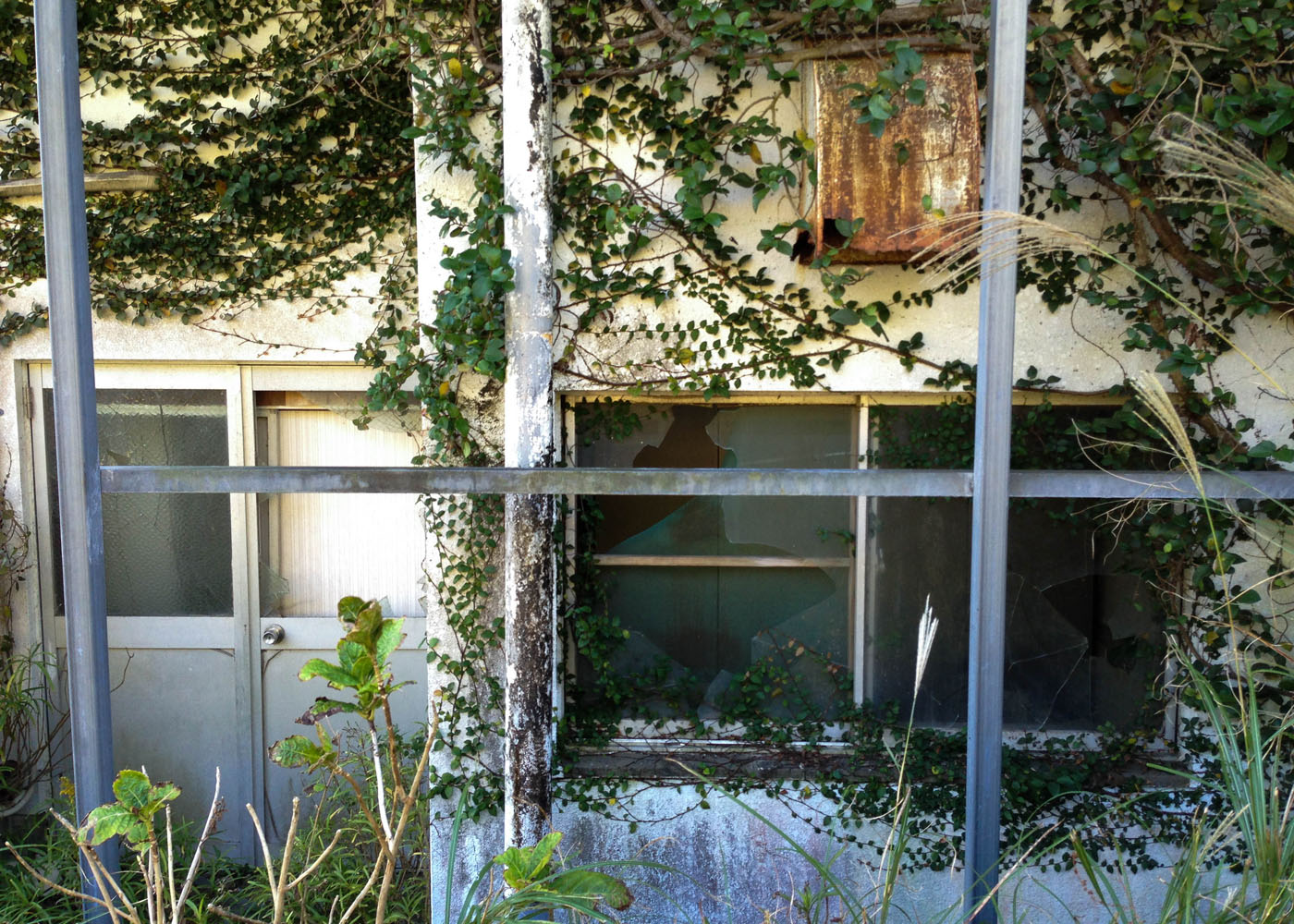 A squeaking door interrupted my thoughts and we decided to get going after that; it was approaching the latter half of the afternoon and we still wanted to get to Kojima island.

On the way out, I noticed a bunch of cars had pulled over next to Komatsu Hill and we discovered that an entire herd of Misaki were grazing there. It was incredible to be so close to them and watch them go about their day. 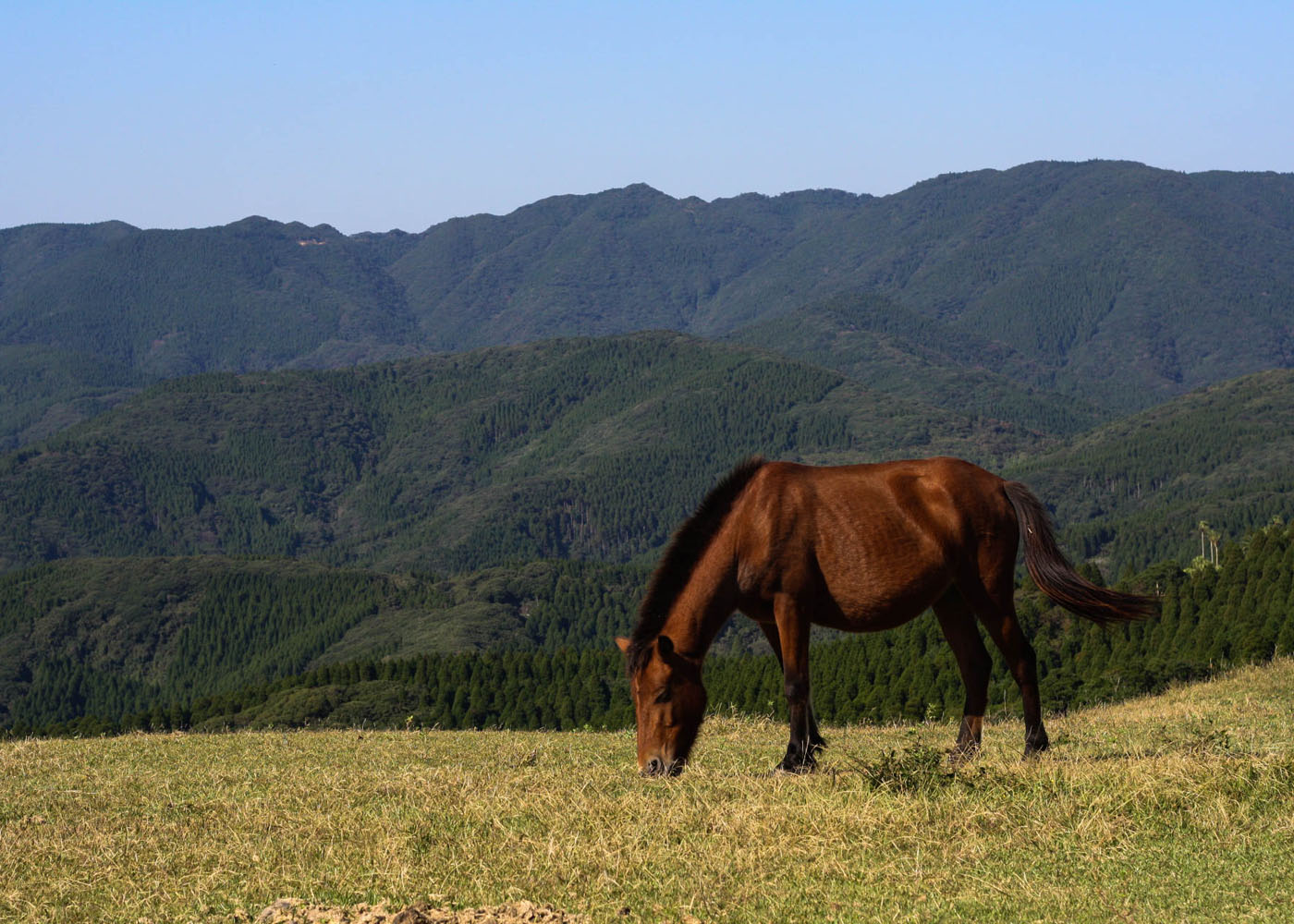 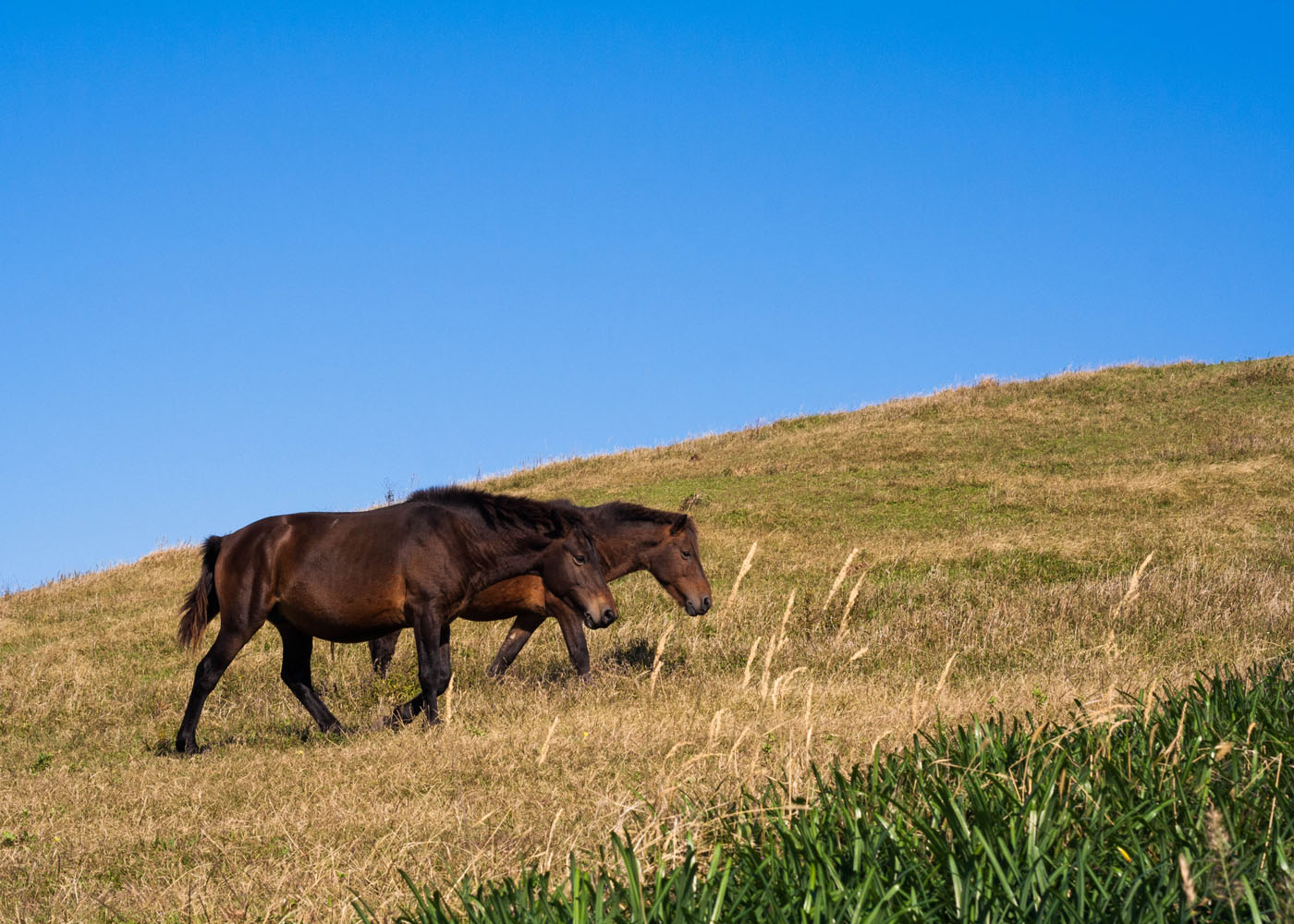 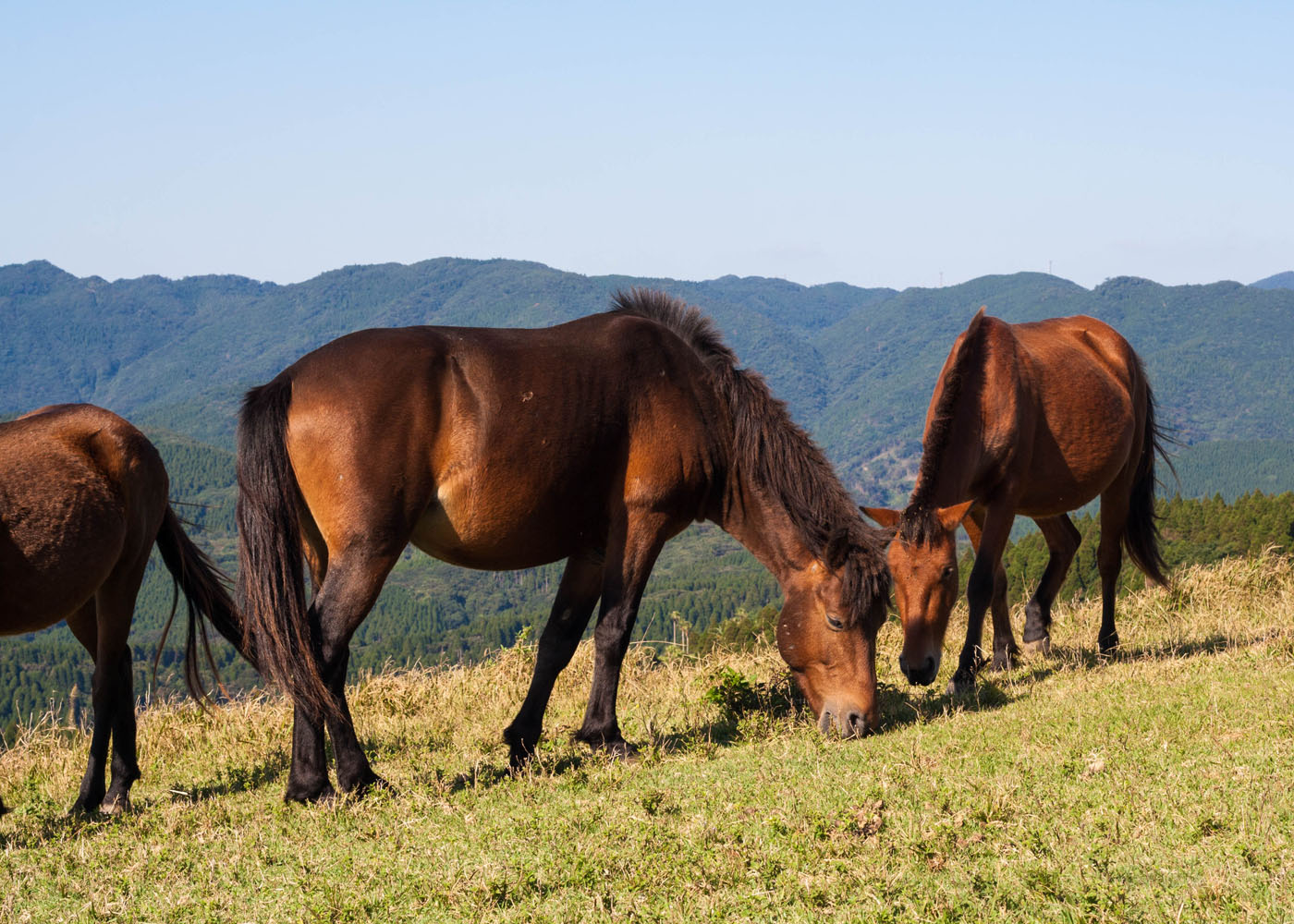 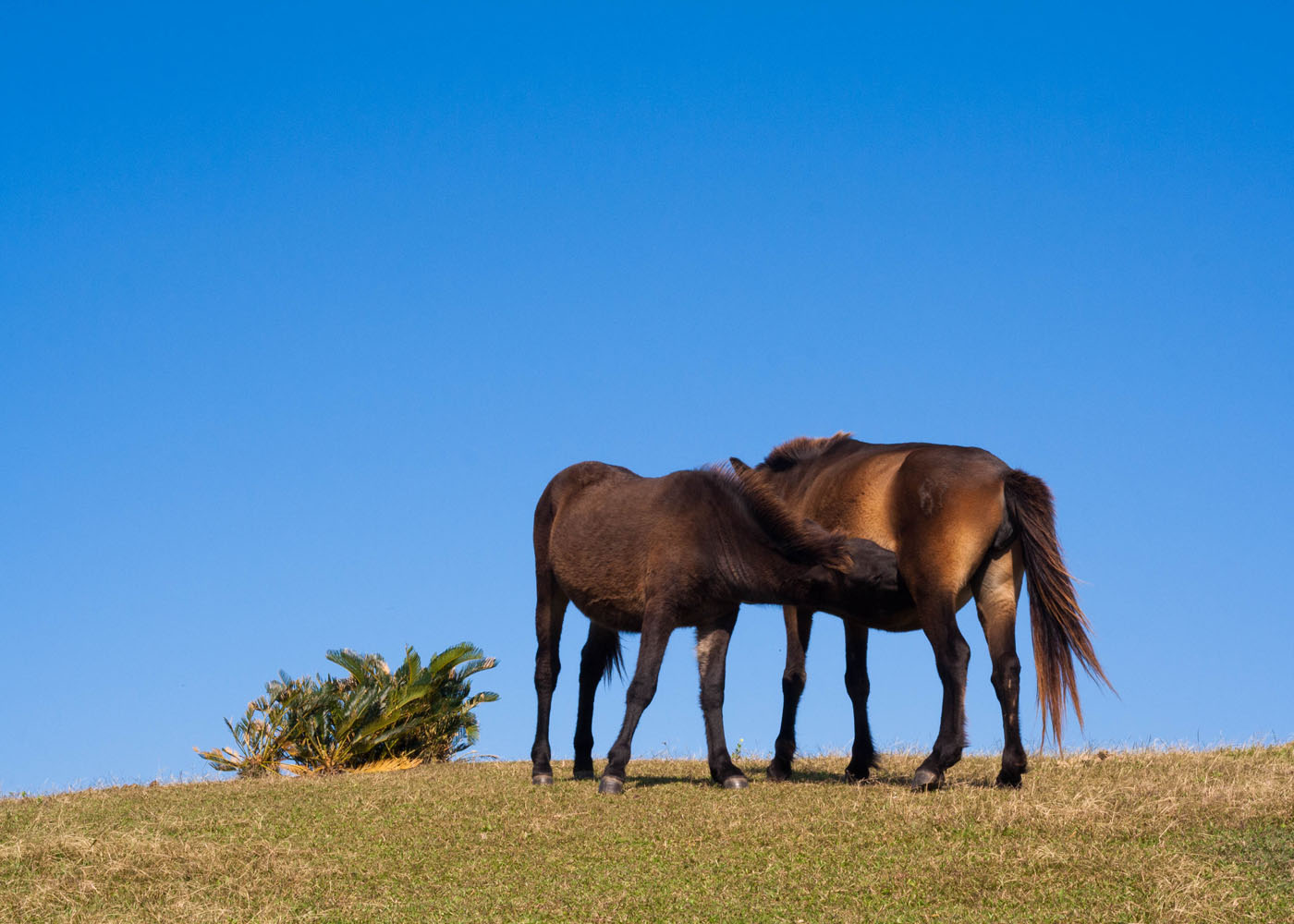 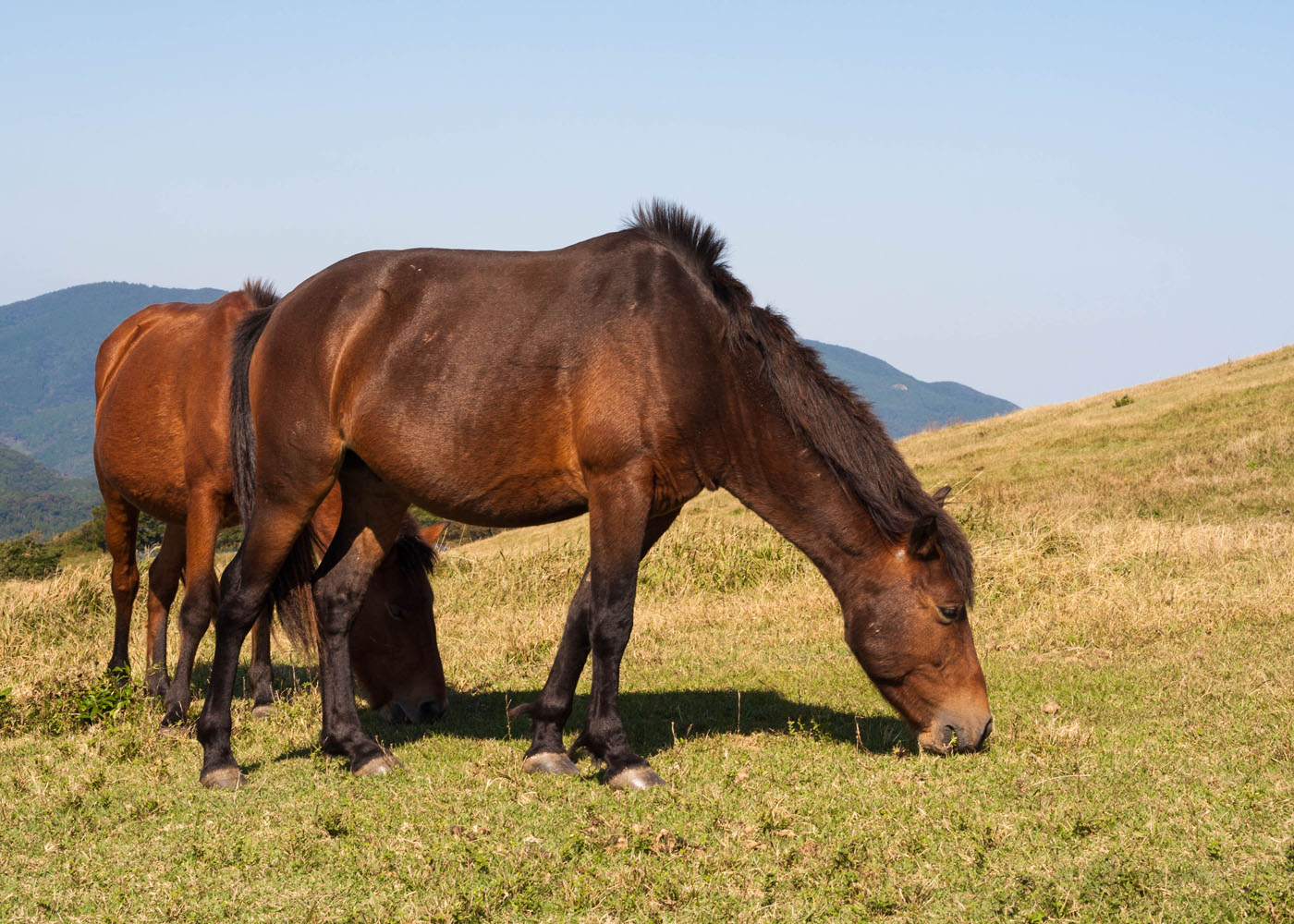 By the time we got to Kojima Island, it was well into the afternoon. A boat pulled up soon after and after a quick exchange with the driver, we hopped aboard. He first took us to a small beach where he stopped the engine and rattled off in Japanese. I didn’t catch all of it, but it had something to do with it being in shadow at that time of day. Just as soon as we had stopped we were off again and he pulled up against a section of rocks jutting out into the sea.

The uninhabited island sits about 300m off the shore of Kushima. It has a circumference of 3.5 km and is home to about 100 Japanese monkeys. In 1934, the island was designated a national treasure. In 1948, scientists from Kyoto University began conducting research on the monkeys and their behaviour. It was discovered that the monkeys were washing sweet potatoes in the ocean before eating them, and that this was spreading via imitation throughout the entire population. The island is considered the birthplace of Japanese primatology and each of the monkeys have been identified and named.

The monkeys didn’t look particularly pleased to see us, and one even went off at Matthew a bit. But I managed to snap a few pictures without harassing them too much by staying putt. Eventually, they warmed up and I had a few gather at my feet. 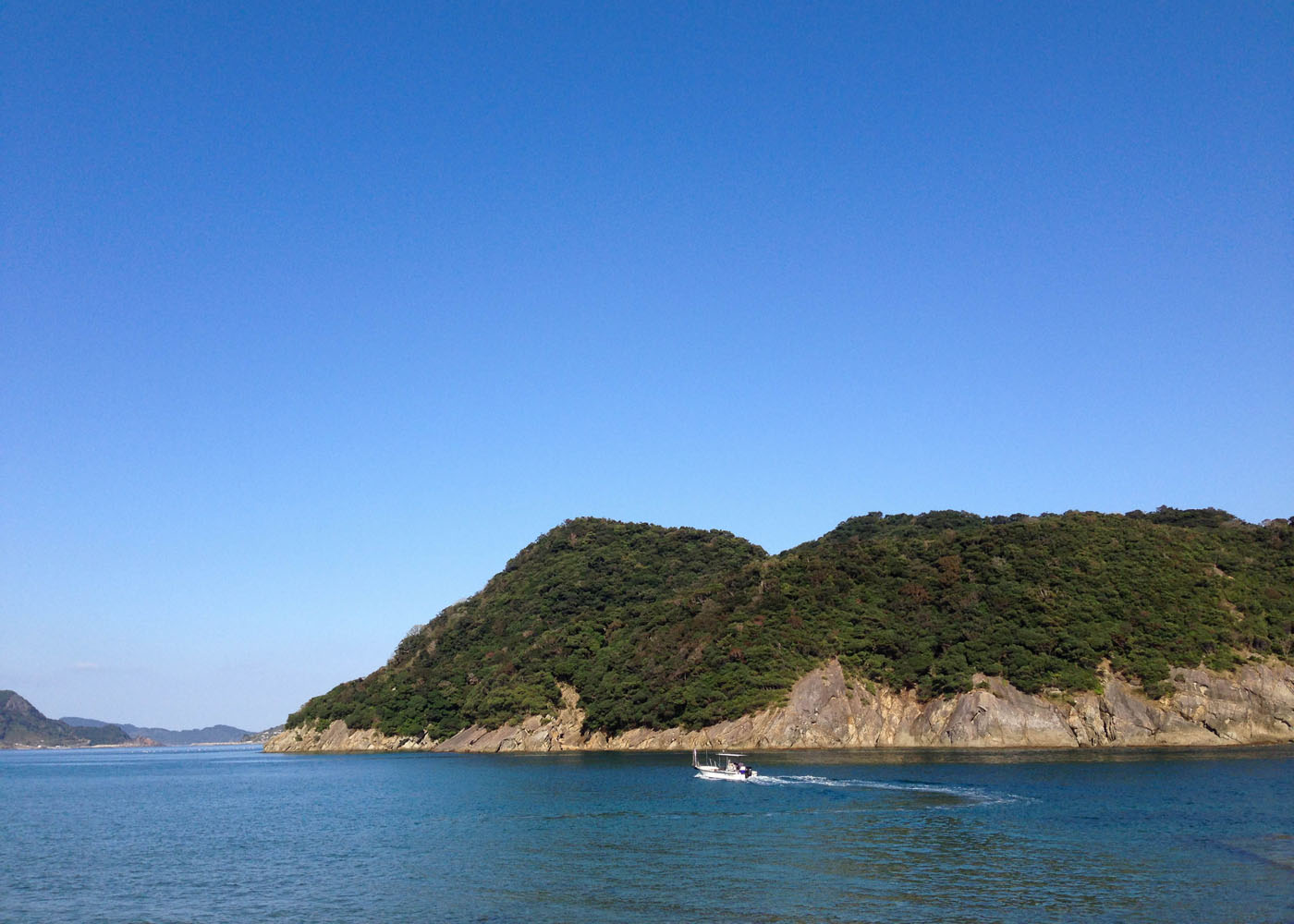 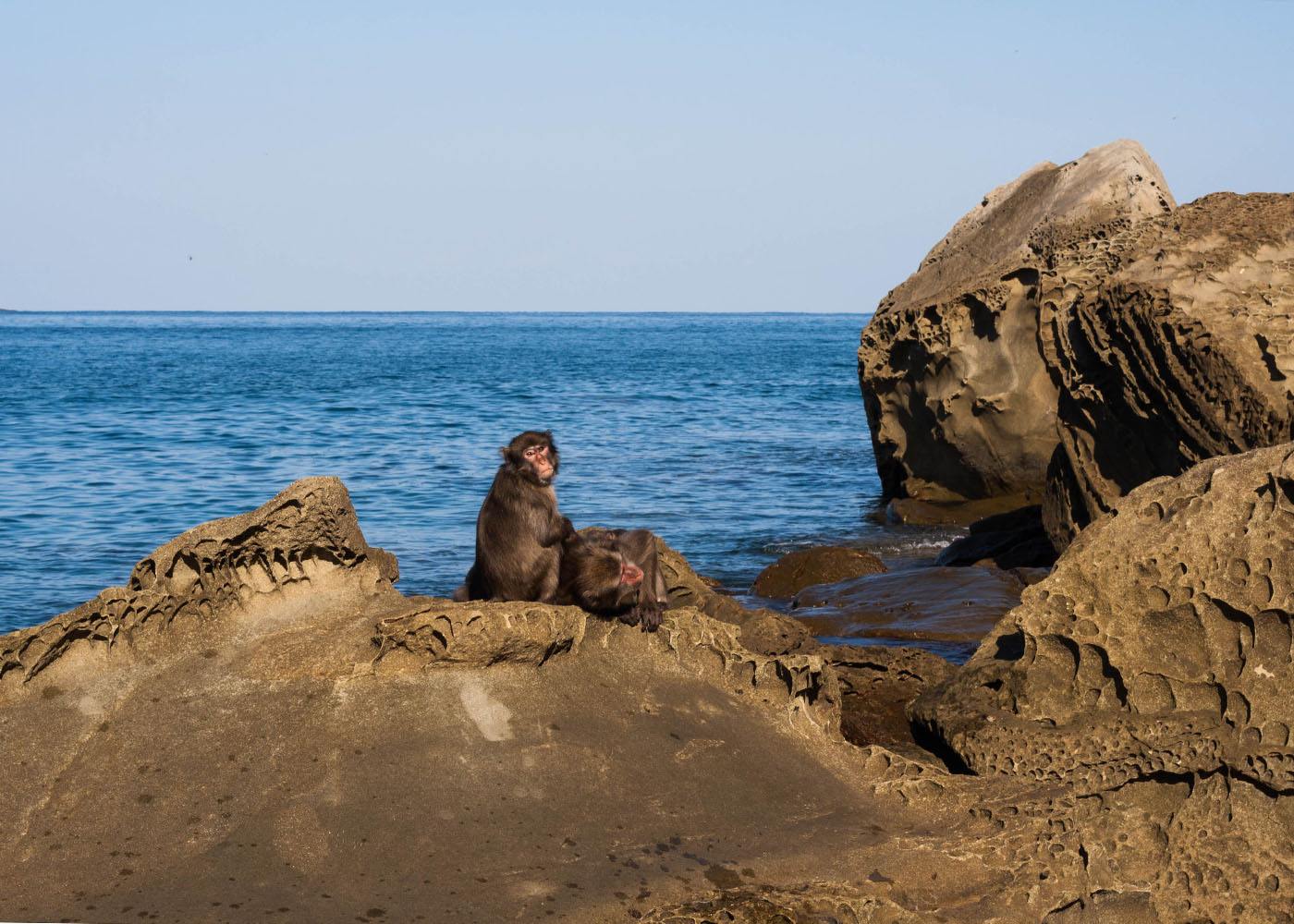 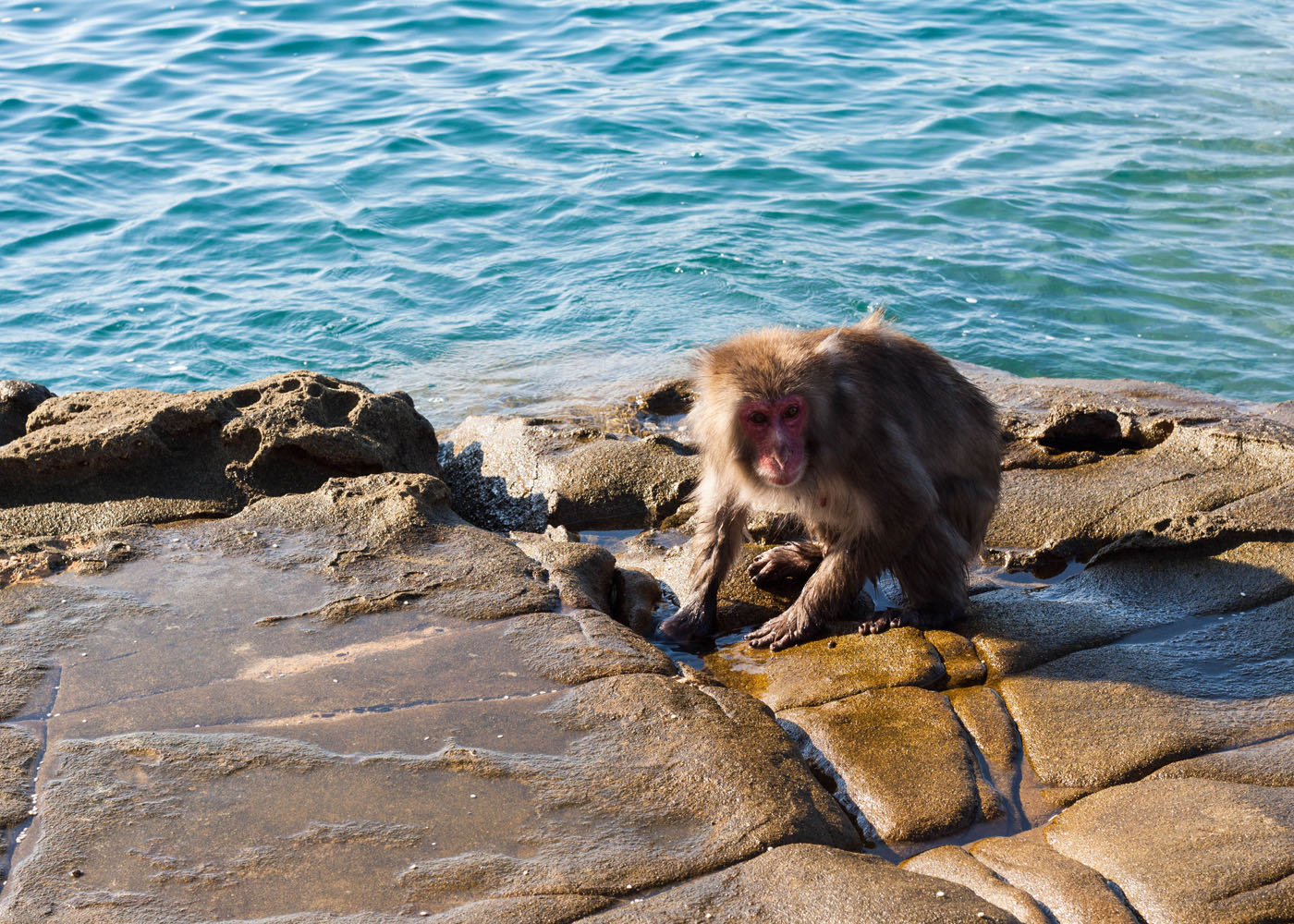 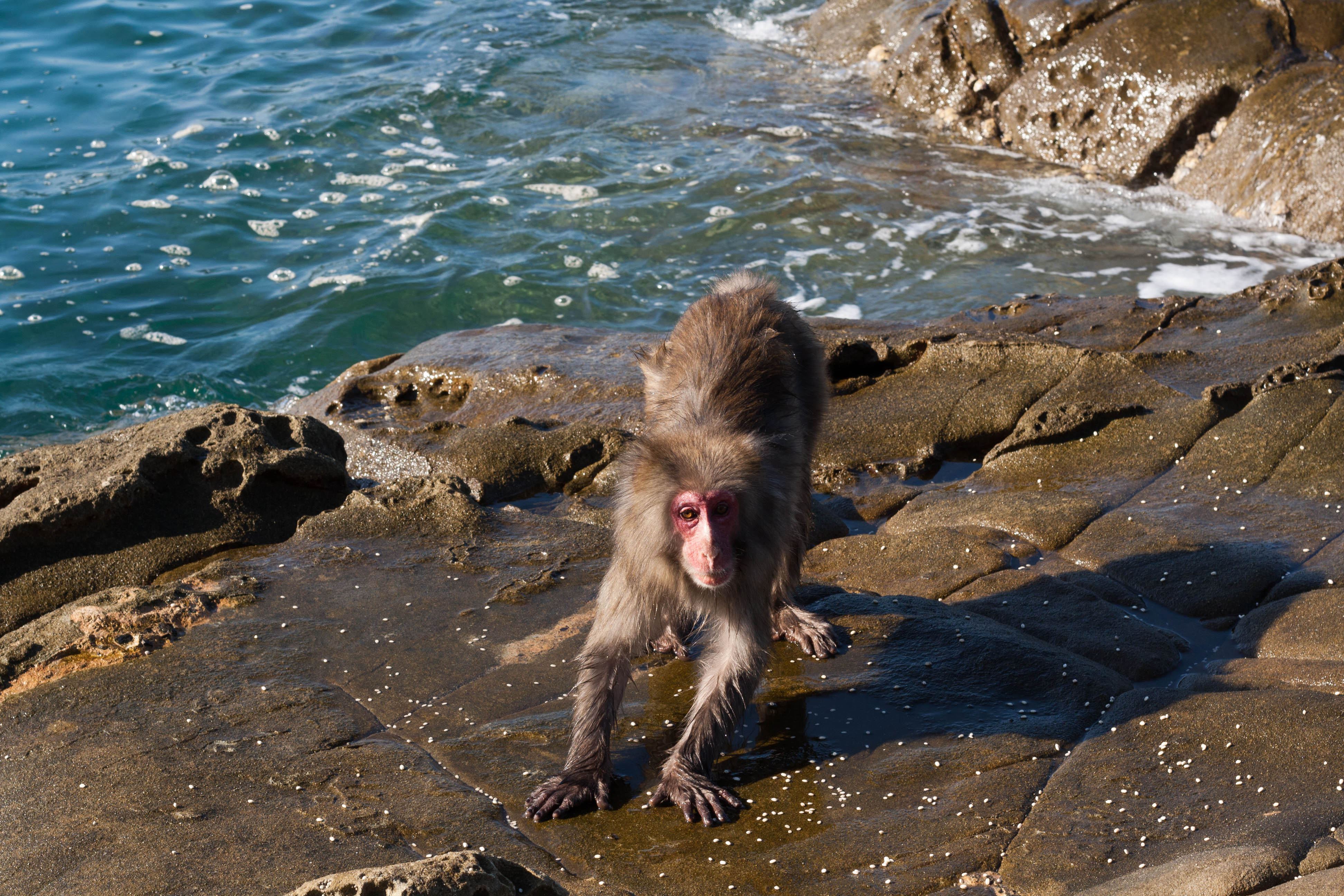 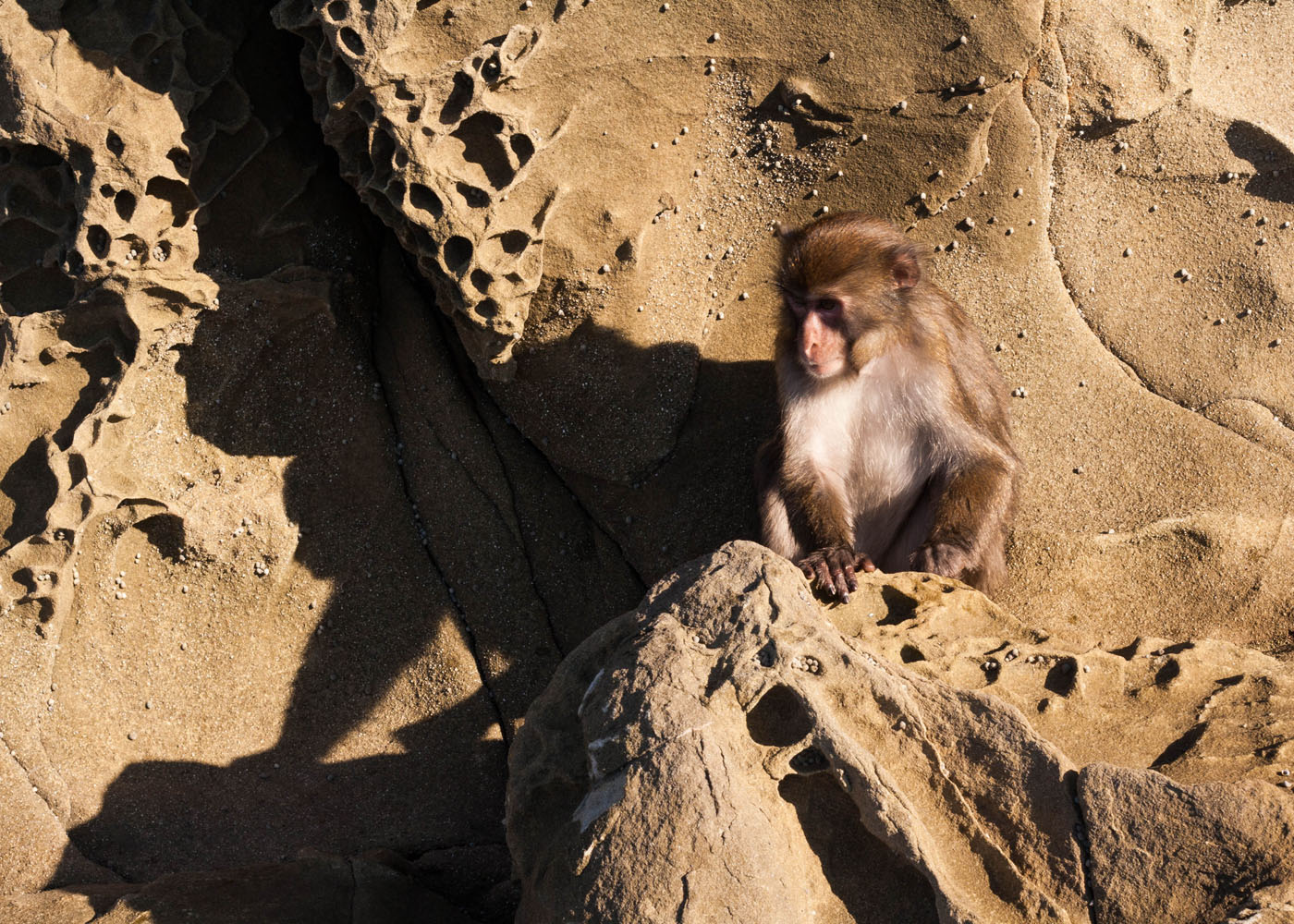 I don’t know if it’s because we were taken to the rocks rather than the beach, but the experience wasn’t what I had been expecting. The monkeys didn’t seem as tame or friendly as they are made out to be, and they had a bit of a fight over the few pellets the boat driver threw to them. The experience didn’t last long either, and we were soon back on the boat and heading to shore. 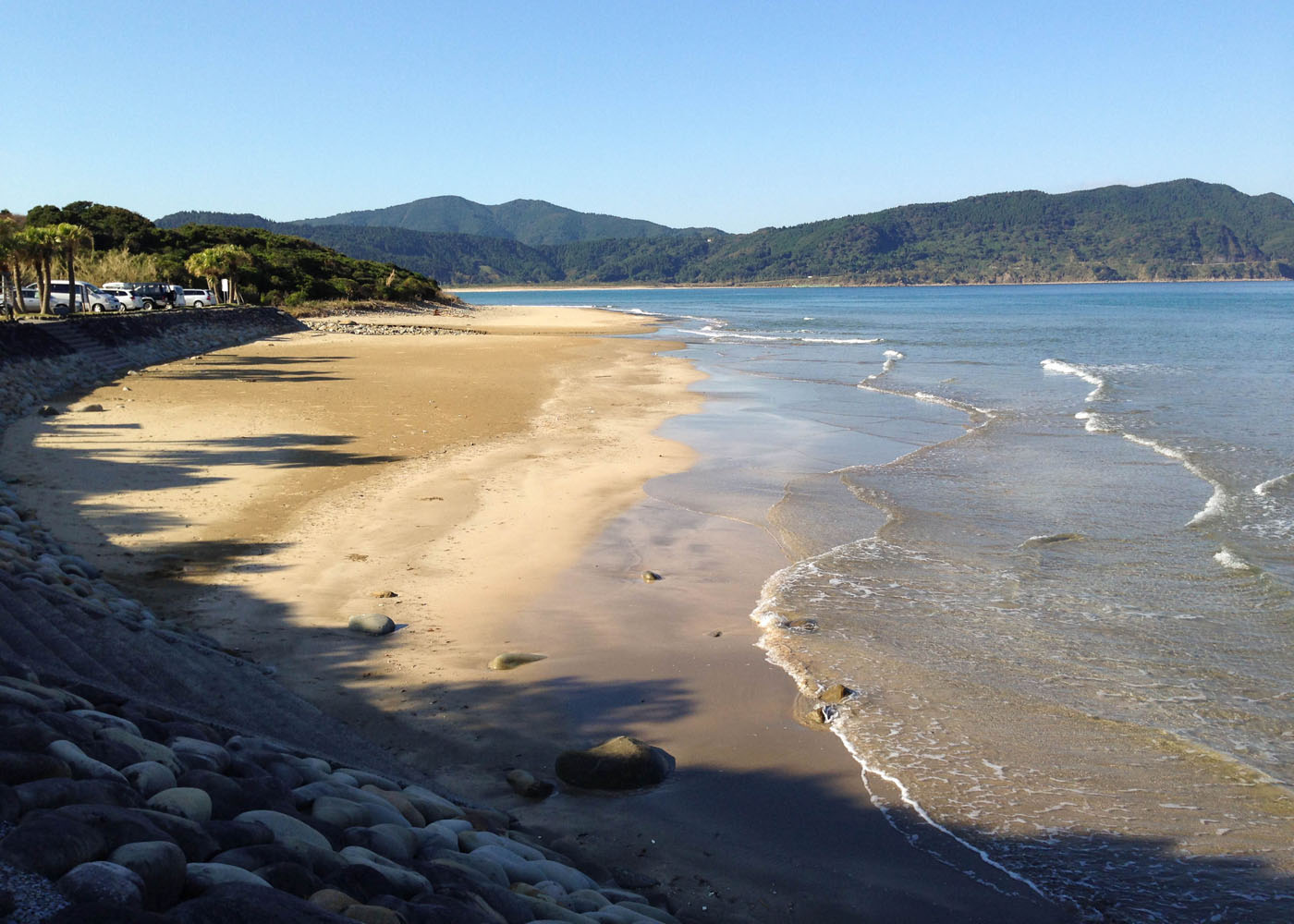 After enjoying the view for a bit, we got back in the car and started the journey home. When we reached Udo Shrine, the sun was already setting, but Matthew convinced me to go check it out anyway. I hadn’t realise how big or spread out it was, and the red was really something in the light of dusk. 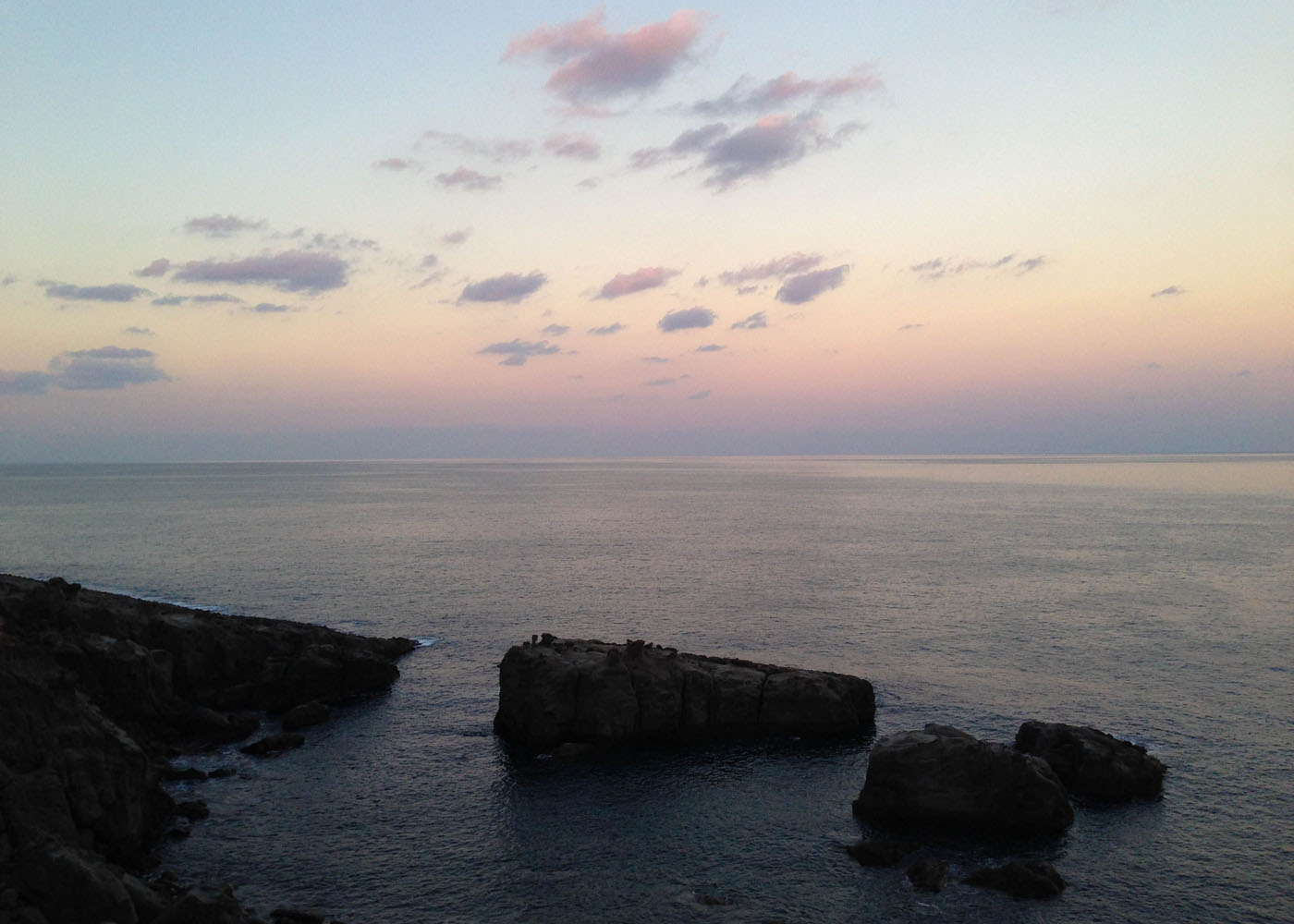 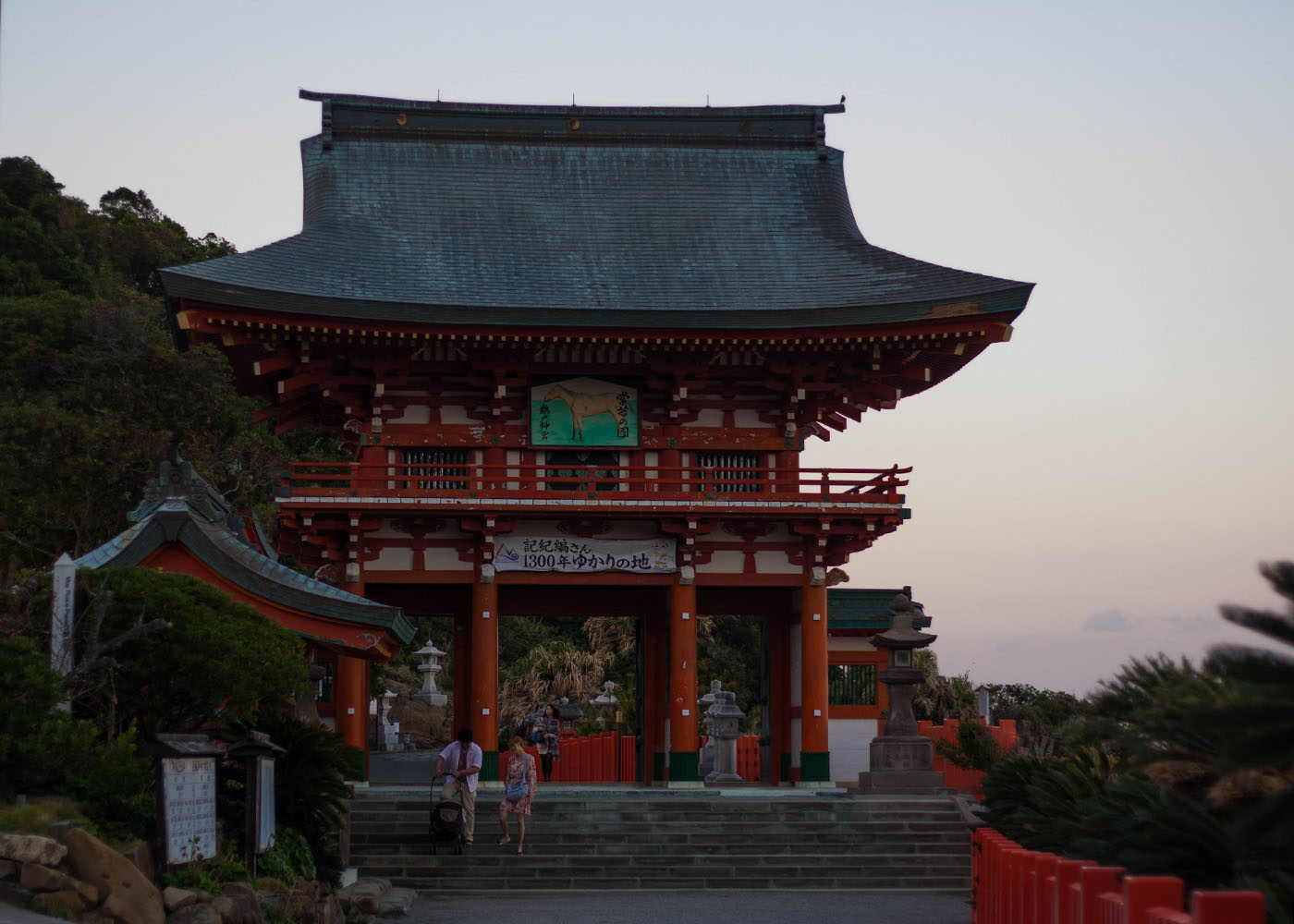 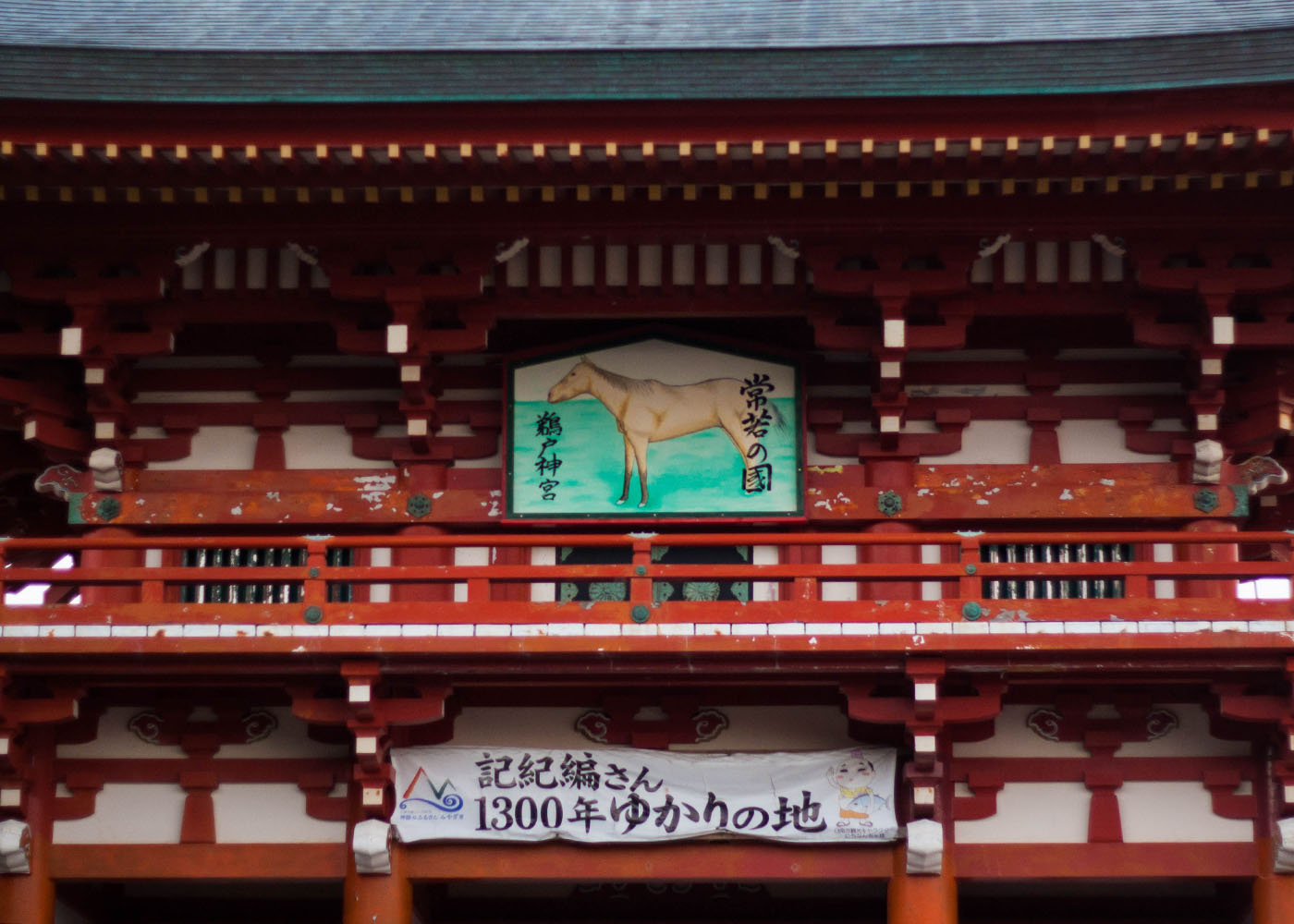 Matthew insisted on following a path that supposedly led to some shrine. It didn’t look like many people had used it and it wasn’t the path I had seen in the photos on the web, so I reluctantly agreed to follow him. It wasn’t a pleasant experience, trudging along the ungroomed path, slipping on the undergrowth and wondering when I’d land on a snake instead of a branch. At one point, the only place to walk was down a narrow staircase right next to a face of rock and I noticed something slither away out the corner of my eye.

This freaked me out to no end – it was now almost completely dark on the path and we hadn’t even reached the shrine yet. When we did get there, it was not even worth it – just a simple red gate in a small cave. And now we had to go all the way back.

By the time we reached the beginning again, there was no light left and I gave up on exploring any more. I was more than happy to get into the car and back on the highway home. 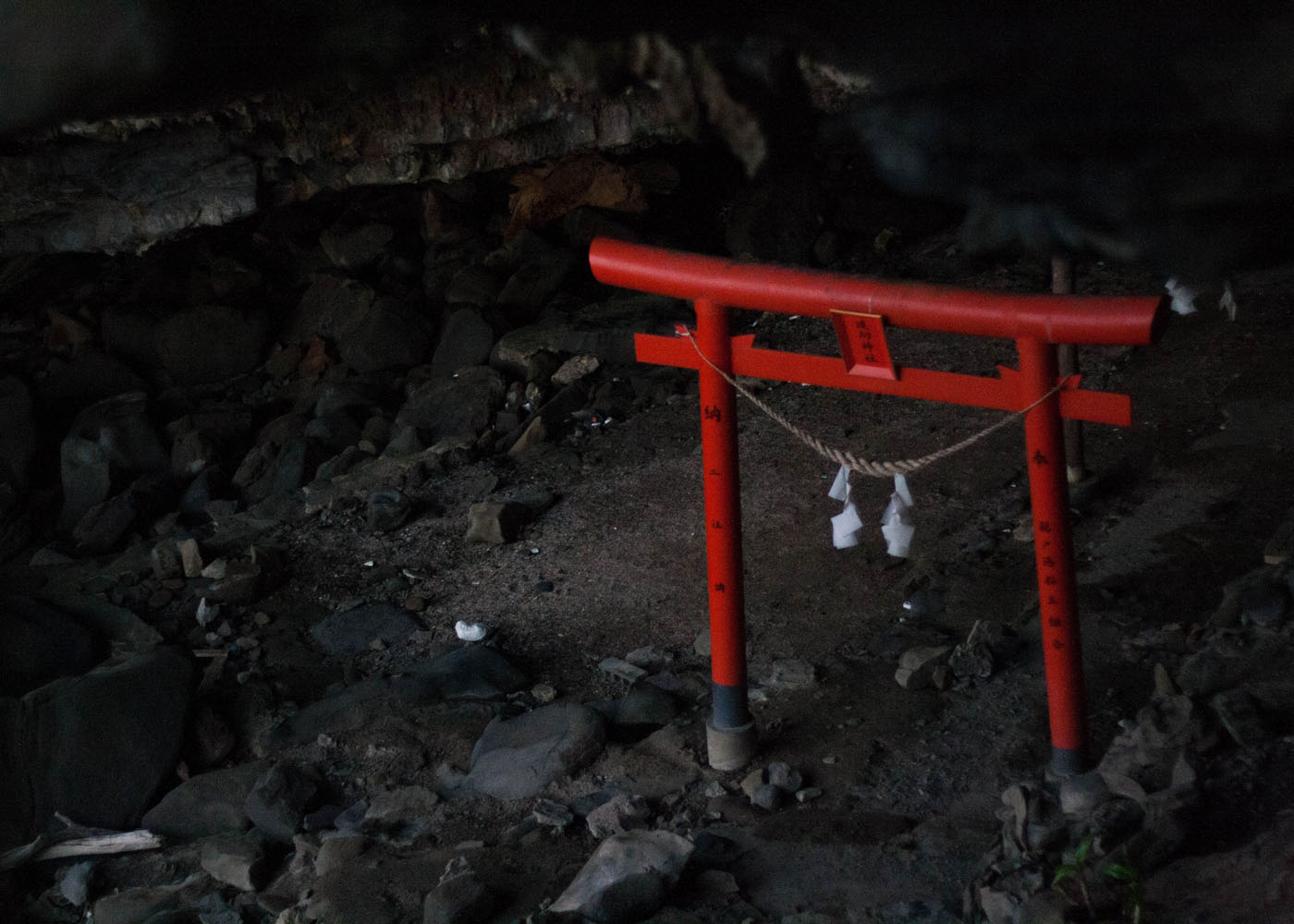