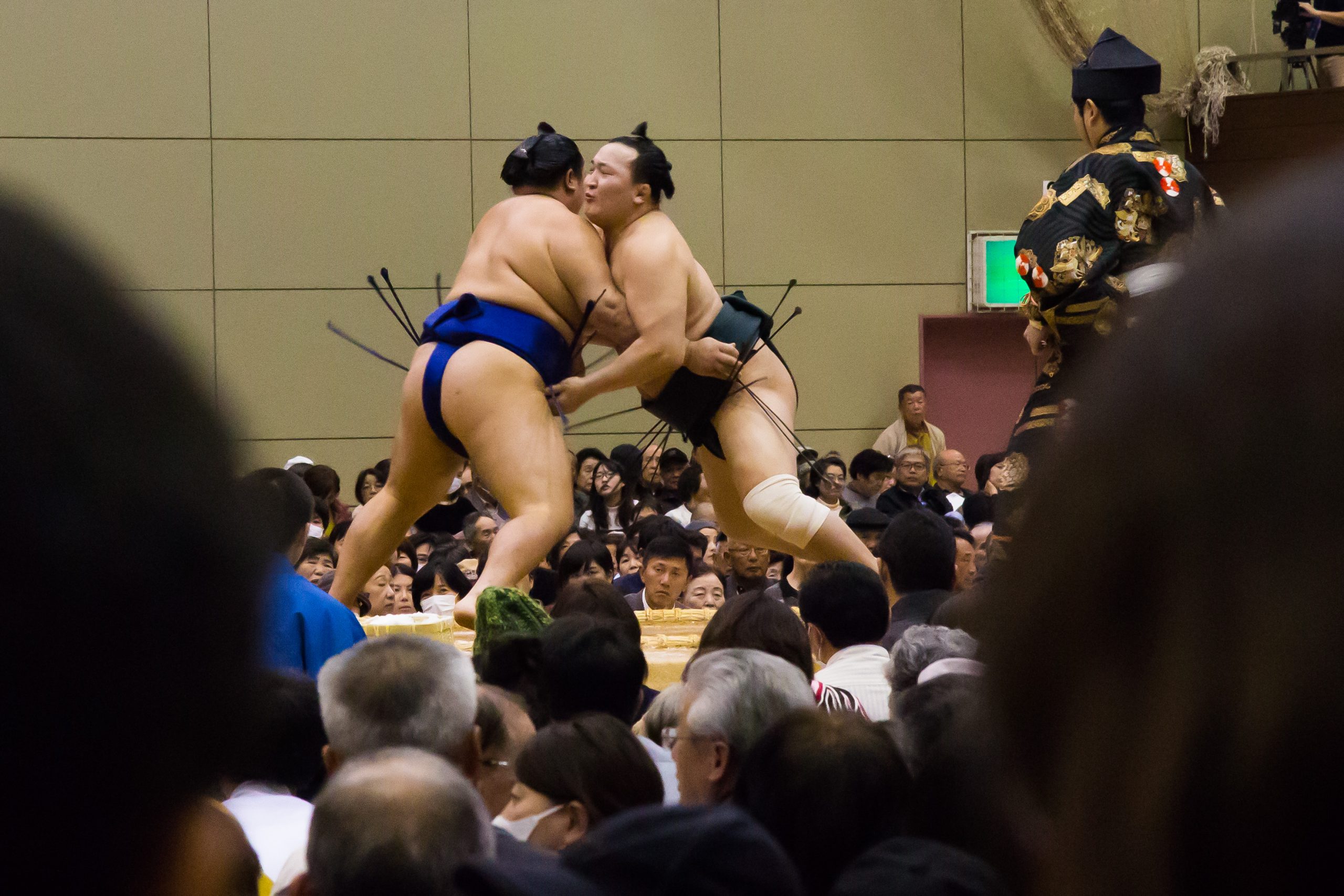 Two crouched rikishi look each other dead in the eye. In perfect symmetry, they rub their hands together, clap once, and then move their arms out slowly to their sides, first facing their palms up, and then turning them to face down. They put their hands on their knees, still not breaking eye contact. One grabs a handful of salt and throws it into the air, and then they both lift their legs out to their sides and bring them back down to the ground. The salt will purify the dohyo; the stomping will drive away bad spirits; and the arm movements will show that they are unarmed. Once the greeting ceremony is complete, the match can begin. They put their fists on the ground. Hakkeyoi!

Sumo is more than just a sport. In this Japanese style of wrestling, the pre-match ceremony often lasts longer than the bout itself, with each movement carefully performed to honor the activity’s core values: integrity, dignity, discipline and strength. Intertwined with the country’s Shinto religion, the history of sumo spans almost 2,000 years. Ancient wall paintings reveal that it was first performed to pray for a bountiful harvest when planting rice.

The earliest written account of sumo, found in the 8th century history book Kojiki, recounts a tale in which the possession of the Japanese islands was decided by a sumo match between the gods Takemikazuchi and Takeminakata. The former won the bout and is believed to have established the imperial family from which Akihito, Japan’s present emperor, traces his ancestry. 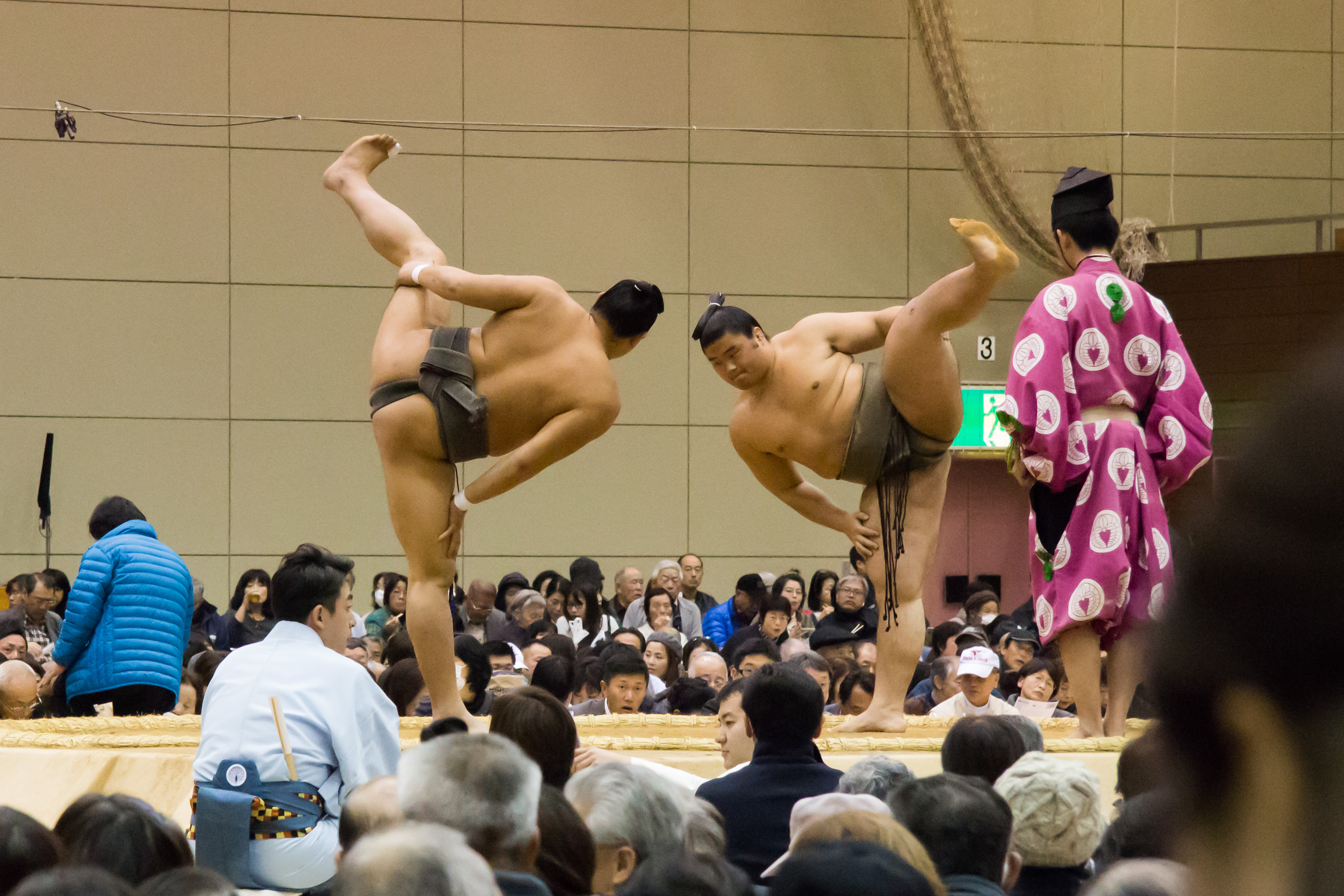 During the Nara and Heian periods, sumo evolved into an event that was performed at the Imperial Palace for the emperor. It was only in the 1600s, when matches were held to raise money for the repair of public works, that it became popular as a spectator sport.  Several orders were issued to have it banned by the ruling government at the time who disapproved of the fighting. In response, the organizers of sumo developed a strict code to govern the practice.

Much like the geiko of Gion who leave home at a young age to move into okiya, sumo wrestlers are recruited at age 15 to be trained by oyakata in living quarters called heya. A wrestler, or rikishi, is expected to stay in this “sumo stable” until he retires or gets married and wear traditional dress – yukata, sandals and a topknot – at all times.

In a strict, regimented routine, rikishi typically wake up before sunrise and practise until lunch, which is eaten in order of rank. New recruits enter sumo in the lowest division (jonokuchi) and attempt to work their way up to the top division (makuuchi). 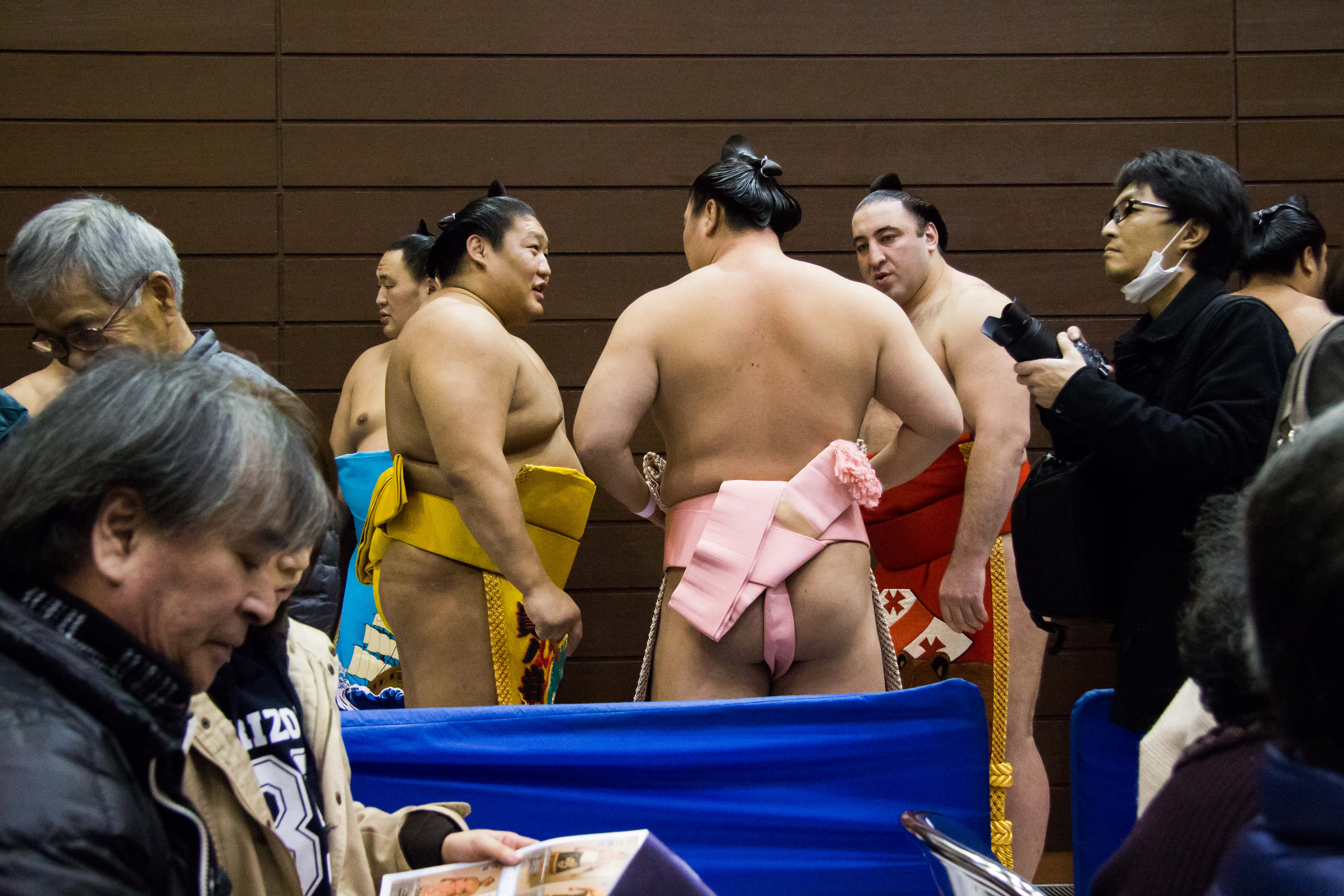 The highest level a rikishi can achieve in the makuuchi division is yokozuna, or grand champion. There have only ever been 71 yokozuna crowned in sumo. Each heya houses about 15 wrestlers and is organised according to this hierarchy. Jonokuchi are glorified servants who get up the earliest and do all the cooking and cleaning for their higher-ranking counterparts.

After lunch, rikishi nap for a few hours to ensure that the 20,000 calories they consume every day turn to bulk. The rest of the day is spent at the gym, or doing housework and after dinner, the wrestlers enjoy just a few hours of free time before lights out.

There are no weight divisions in sumo tournaments, so the wrestlers aim to become as big as possible to gain an advantage in the ring. Rikishi usually pack on the pounds with multiple servings of rice, beer and chankonabe, a kind of stew that contains quartered chicken, fried fish, tofu and vegetables. The result, of course, is an array of health problems, including high blood pressure, diabetes, heart attacks and arthritis. The life expectancy of a retired wrestler is 20 years shorter than that of the average Japanese male. 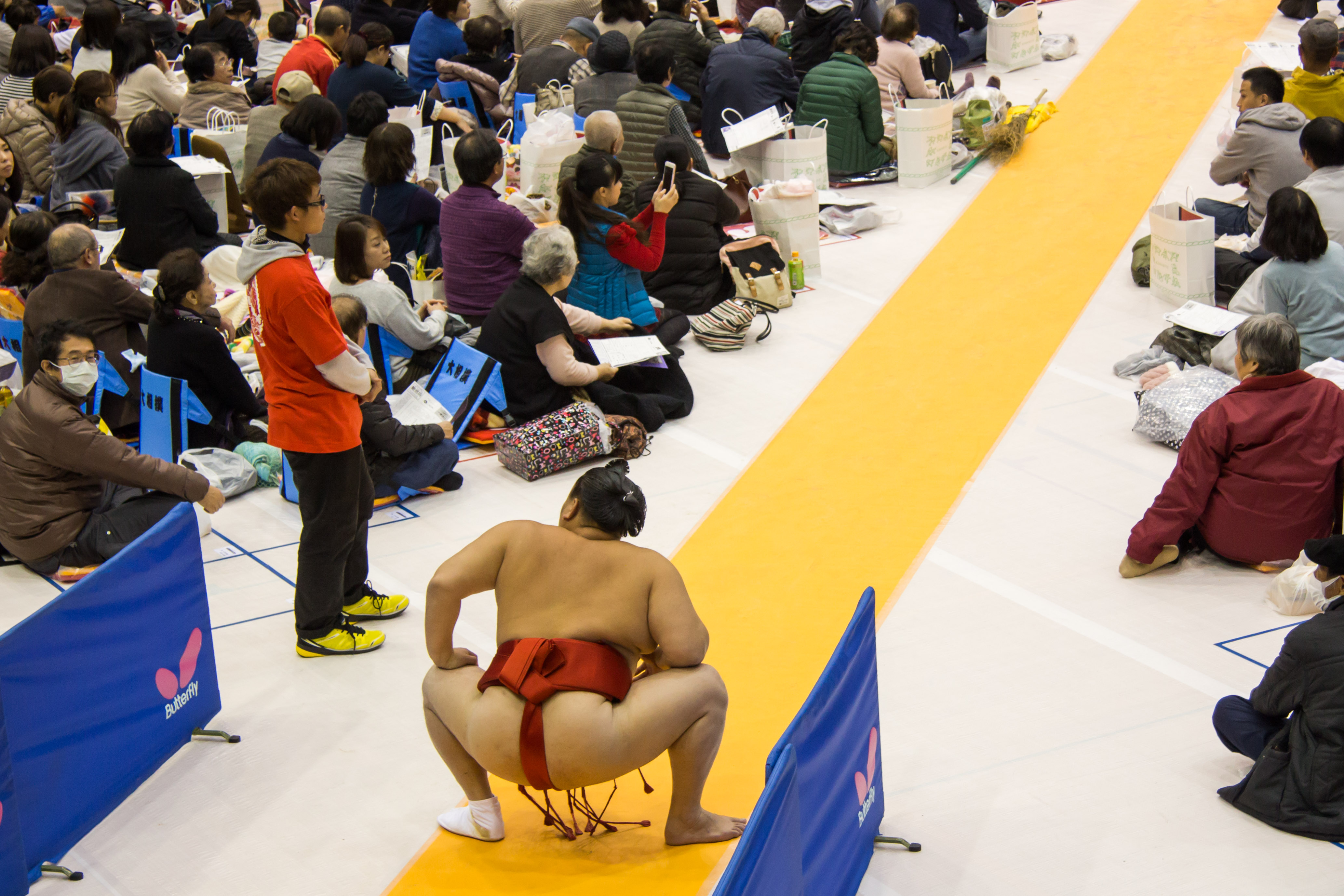 In addition to their strict daily routine, sumo wrestlers are on a strenuous tournament schedule. Starting in January every year, there is a two-week long tournament held every other month – first in Tokyo, then in Osaka, then back in Tokyo, then in Nagoaya, and back in Tokyo once more before finishing in Fukuoka. This leaves wrestlers little time to recover from injuries, usually resulting in one or two being absent from a match at any given time.

It’s a hard life, especially for lower-ranking wrestlers, and one that is becoming increasingly less attractive to young people in Japan. Not only do makuuchi earn ten times less than pro league baseball players in Japan, but as the Times explains it, “with fewer Japanese desiring to be salarymen, an even smaller number want to replicate that experience while wearing a fat suit.” Furthermore, the country’s national sport has not one current, active yokozuna that is Japanese – the three presently reigning champions are all Mongolian. The last time the country crowned one of their own was in 1998. 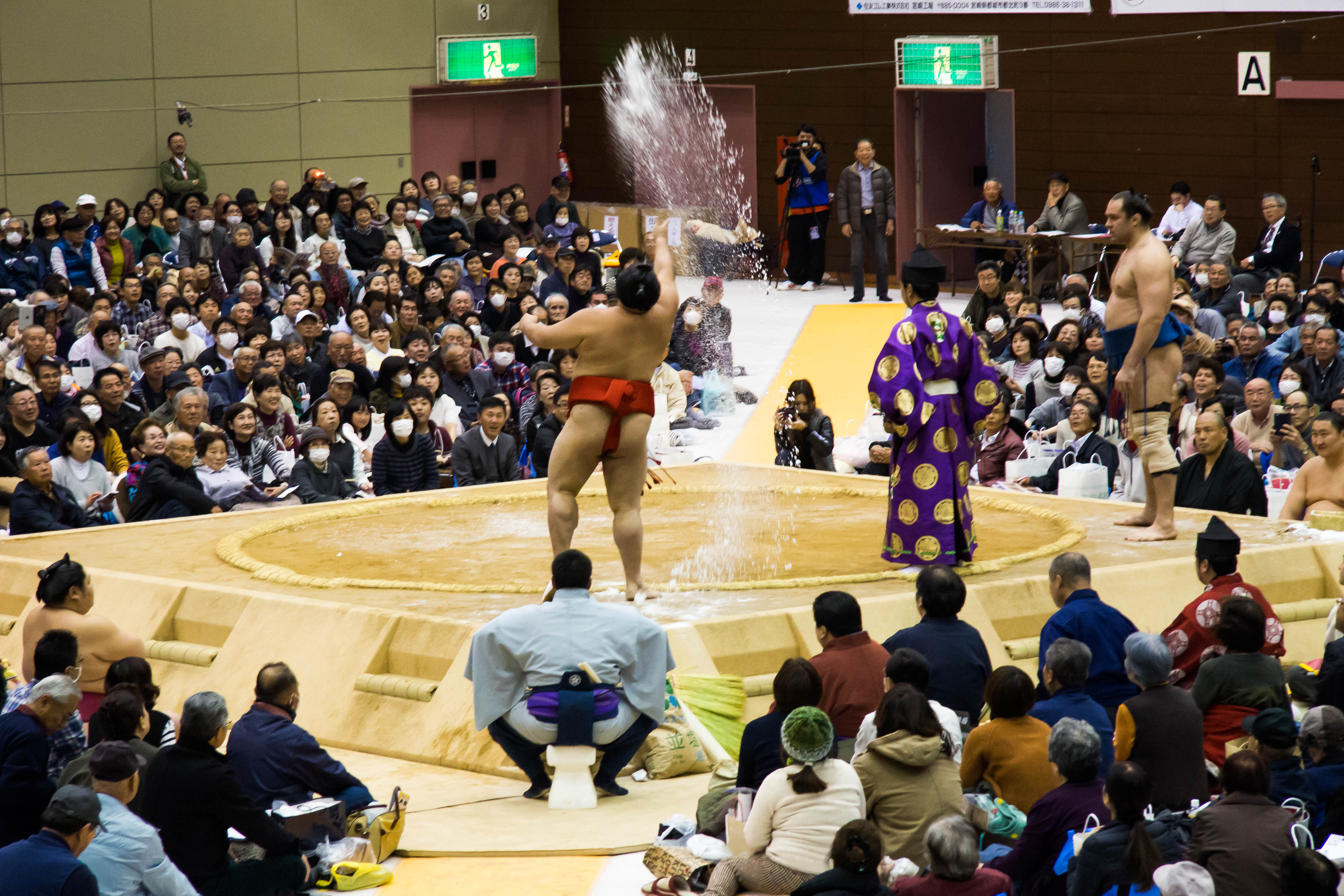 It hasn’t helped matters that in recent years the sport and its governing organisation, the Japan Sumo Association (JSA), have been clouded in scandal and controversy. Reports of match-fixing, close ties to the yakuza, drug use, and the death of a teenage recruit have tarnished the reputation of the country’s national sport.

The JSA also takes a lot of heat for an archaic rule that forbids women from even touching the sacred dohyo, let alone competing in the sport professionally. “When Osaka Gov. Fusae Ohta was asked to present a prize to the champion of the annual Kansai tournament,” the Japan Times reports, “she was required to make the exchange on a walkway next to the ring or to send a male representative.” Ohta’s persistent requests to the JSA to allow her to perform her role inside the ring were denied.

It appears that Japan’s oldest and most traditional sport is suffering something of an identity crisis. What that means for the future of sumo is still unclear. In the meantime, it’s business as usual for the JSA. In between official tournaments, the organization continues to promote the sport by holding exhibition competitions.

Rather than fans having to travel to the designated cities to see sumo matches, sumo wrestlers come to them for one-day events in cities across the country. When a fellow JET was selling two tickets to a winter tour match in Miyakonojo, just 48 km (29.8 mi) south of Miyazaki City, I jumped at the chance to see sumo live in action – it’s been on my bucket list ever since I came to Japan.

Austin and I had returned from our hike in Ibusuki late the night before, so we weren’t really in the mood to wake up and drive the hour south to be there when the doors opened at 08:00. We decided to catch up on some sleep, arriving instead closer to 11:00. Turns out we hadn’t missed a thing – the wrestlers had only been warming up and the first match was just about to begin.

The rules are pretty straightforward: the first wrestler to knock his opponent out of the ring or off his feet is the winner. For each bout, the referee, or gyōji, will decide and announce the winning move. The JSA recognizes 82 of these kimarite, but only about a dozen or so are used on a regular basis. 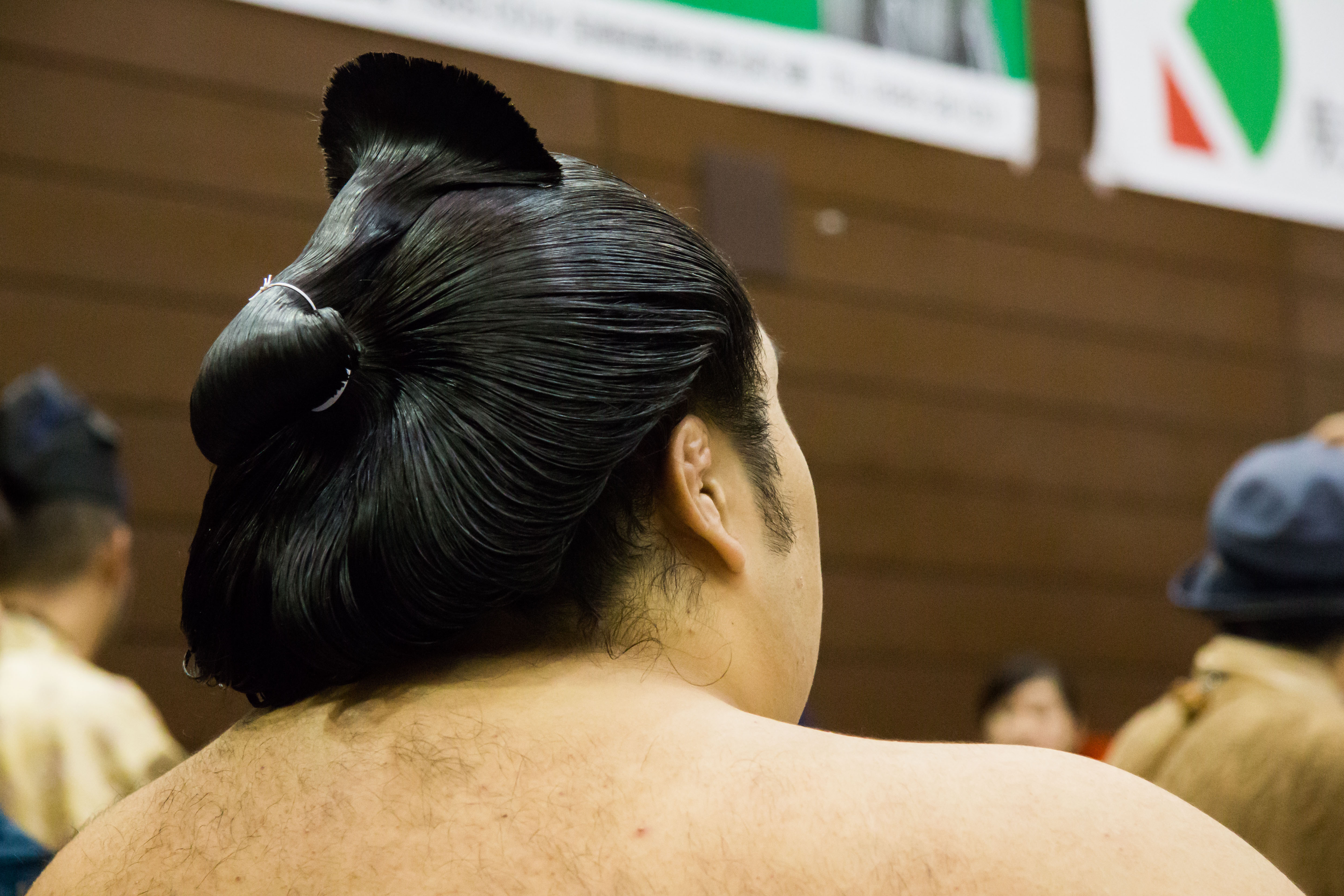 The most common winning moves are oshidashi – pushing your opponent out of the ring without holding their mawashi, or belt, while maintaining hand contact throughout; yorikiri – pushing your opponent out of the ring backwards while maintaining a constant grip on his belt; and uwatenage – heaving your opponent down to the ground as he turns away. Open slaps to the upper body are allowed, but striking with fists, kicking, and hair-pulling are prohibited. Interestingly, if a sumo wrestler’s mawashi falls off during the match, he automatically loses.

We ended up sitting in a section of chairs that was right beside a cornered off area where sumo wrestlers who would enter the dohyo on the left were waiting and warming up. Rikishi rarely show any emotion, even when interacting with their fans; a stoic expression symbolizes humility. Yet around each other they seem to forget these masks. Watching grown men slap each other on the stomach, pinch each other on the nipples, and give one another massages was almost as fascinating to me as the matches themselves.

It’s not hard to understand why sumo has survived for two millenniums. Watching the theatrical blend of martial art and sport is a unique and exhilarating experience. The fact that sumo is now a dying art is a very sad thing. In a country where tradition is squeezed onto so tightly I suppose some was bound to trickle through the cracks.