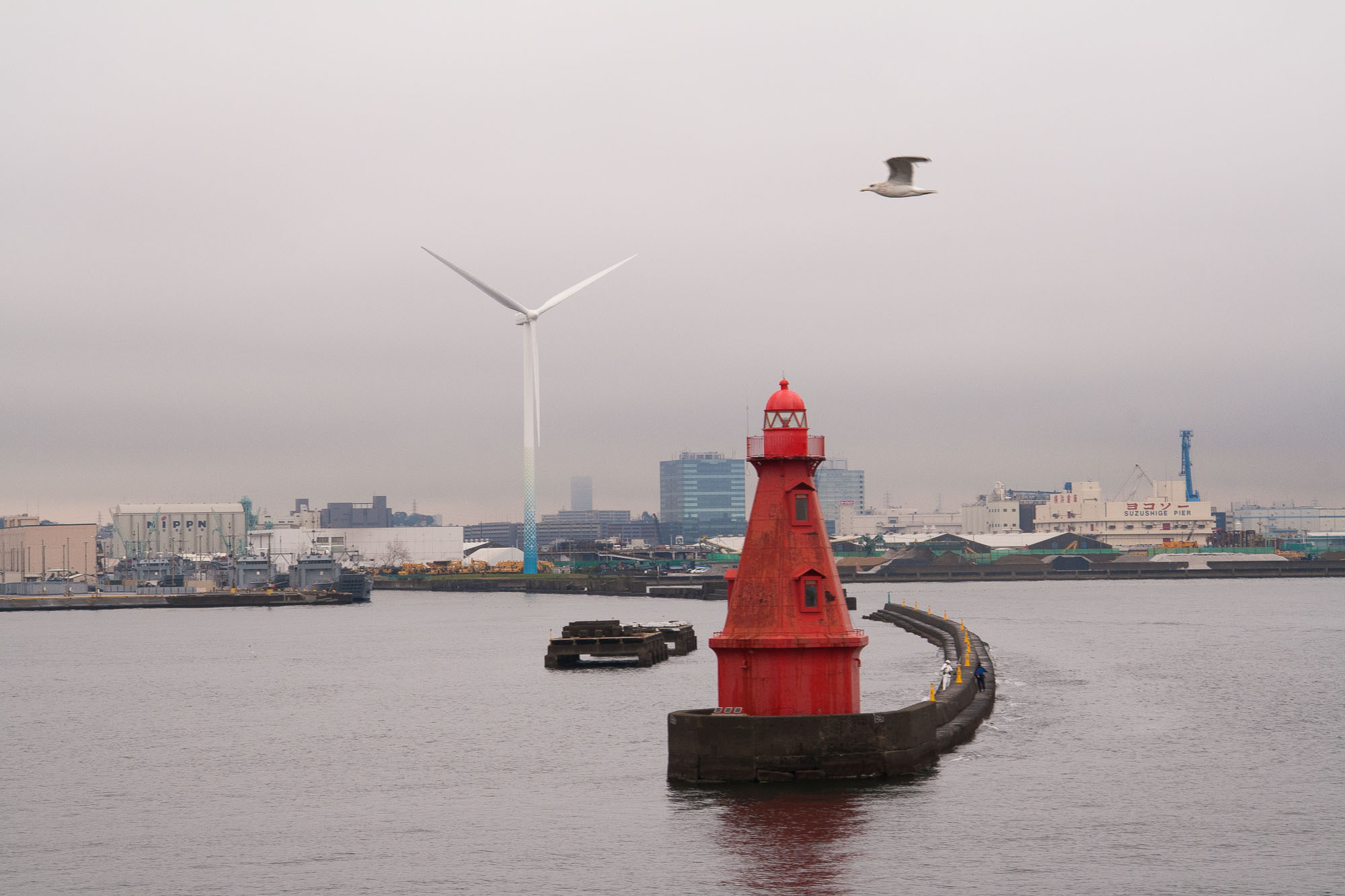 Squelch-squelch, squelch-squelch.
I could feel water creeping across my socks, slowly drowning my toes.
“Urgh, my feet are all wet,” Ian moaned.
I looked down to see tiny rivers flowing from the seams of his worn-out bluchers, just in time for me to sidestep another, giant puddle.

The forecast for the Saturday of our trip to Tokyo had been intermittent rain, not plummeting sheets, so now we were dodging tiny lakes, unprepared, as we followed Jo-san down to the port to buy our tickets for the Marine Rouge. Why had we thought it was a good idea to do a boat tour of Yokohama Bay in the rain?

The Japanese French menu for March-April is the former in taste and the latter in size. There’s a cup of tomato bean soup and a bottomless breadbasket to start, and then a “salad” that is really only lettuce leaves.

I chose the fish course, and got one piece of sautéed snapper and one piece of salmon. Ian and Jo-san went with the meat and each got two rounds of beef wrapped in bacon. Touch your middle finger with your thumb – that should give you a pretty good indication of how big each piece was.

The “seasonal vegetables” that accompany the dish are, precisely, one potato wedge, one cherry tomato and one baby carrot, and dessert is a milk pudding dome with a third of a frozen waffle and fruit ornaments. Coffee is served after the meal, but you have to pay extra for any other drinks, which start at 900円 ($8; R123; €7).

The food wasn’t bad; it just didn’t live up to the price. A better bet might be the night cruise, which is double the yen but is rumored to have an all-you-can-drink option. Booze cruise for the win, right?

As we were finishing dessert, the rain seemed to ease up a little, and the clouds began to break apart. On my way to the bathroom, I came across a door that led out onto an open deck. Just then, the sun began to peek through. I went back to the dining room to call Ian and Jo-san, and together we made our way up to the Sky Deck.

The ship cruises past 8 different points of interest in the bay, although you get to see a lot more than that. The first is Yamashita Park, which is possibly the most famous park in Yokohama. Located right in front of Yokohama Port, it stretches almost 700 meters from the east side of Osanbashi to Yamashita Pier. Yamashita opened in 1930 and was built using rubble from the Great Kanto Earthquake.

You can’t see it from the boat, but the park is also home to the famous “Little Girl With Red Shoes On” statue. The statue represents a famous Japanese song called Akai Kutsu (Red Shoes). It’s based on the true story of Kimi Iwasaki, who, at the age of 3 in 1905, was surrendered to American missionaries by her mother, who could no longer afford to take care of her.

Kimi was supposed to accompany the couple back to the States, but she contracted tuberculosis before the voyage and was left to die in an orphanage. Kimi’s mother, believing her daughter was in America living a better life, remarried and moved to Hokkaido, where she lived out the remainder of her days, unaware that Kimi was still in Japan.

The second sight on the cruise is Minato Mirai 21, a modern urban development project that was created on 186 ha of land. The area has office blocks, hotels, amusement parks and convention facilities, as well as art museums and concert halls. It attracts more than 50 million visitors each year.

The Red Brick Warehouses caught my eye; I recognised them from pictures I had seen online. Something of a Chelsea Market in New York City, the refurbished historical buildings now house a range of cafes, restaurants and shops.

The Yokohama Bay Bridge looked particularly interesting on this gloomy, overcast day; the tops of the 175 meter high link between Yokohama and Tokyo were completely invisible in the cloud.

The fifth attraction is Honmoku Pier, or Yokohama Port’s largest container terminal. Furniture, food and clothing are all transported from here to different parts of the world. The gantry cranes that load and unload the containers reach as high as 100 meters.

At the tip of the pier is the Honmoku Yokohama Port Symbol Tower, which serves as a signal station for in- and outgoing ships.

The second-last sight on the cruise is Tsurumi Tsubasa, a cable-stayed bridge on the western side of the bay that links Ougishima and Daikoku Pier. The total length of the bridge is 1,021 meters (3,350 ft).

And finally, we sailed past the TEPCO Twin Towers, which also disappeared into the clouds. The towers form part of the Yokohama Thermal Power Station and are used for air-stacking of the 7th and 8th generators, reaching a height of 200 meters.

By the time the ship had reached the port and was going in to dock, I had forgotten all about our disappointing lunch.  Even in the overcast and rain, the views from the boat were impressive and what we had seen was well worth the yen. 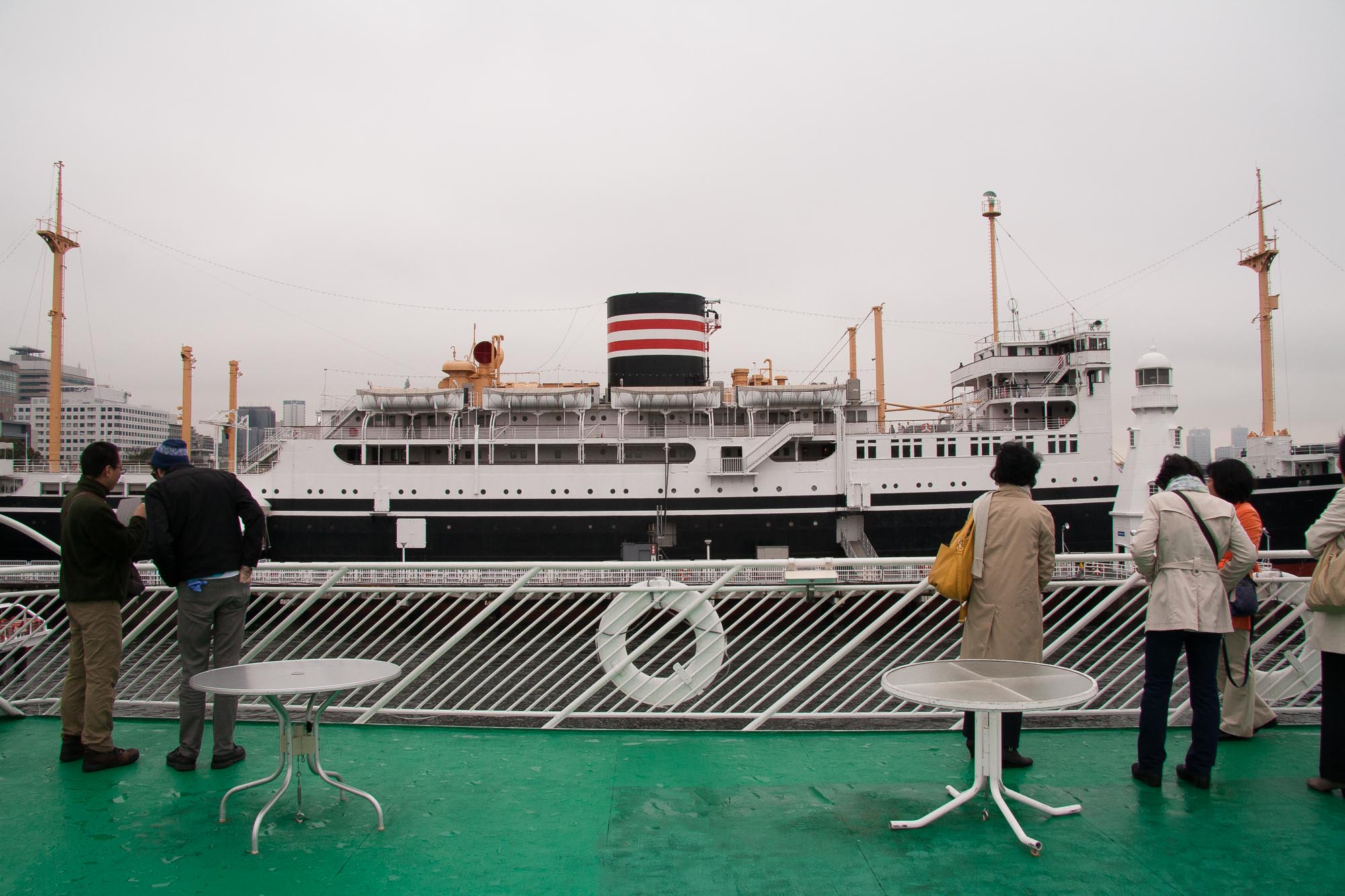