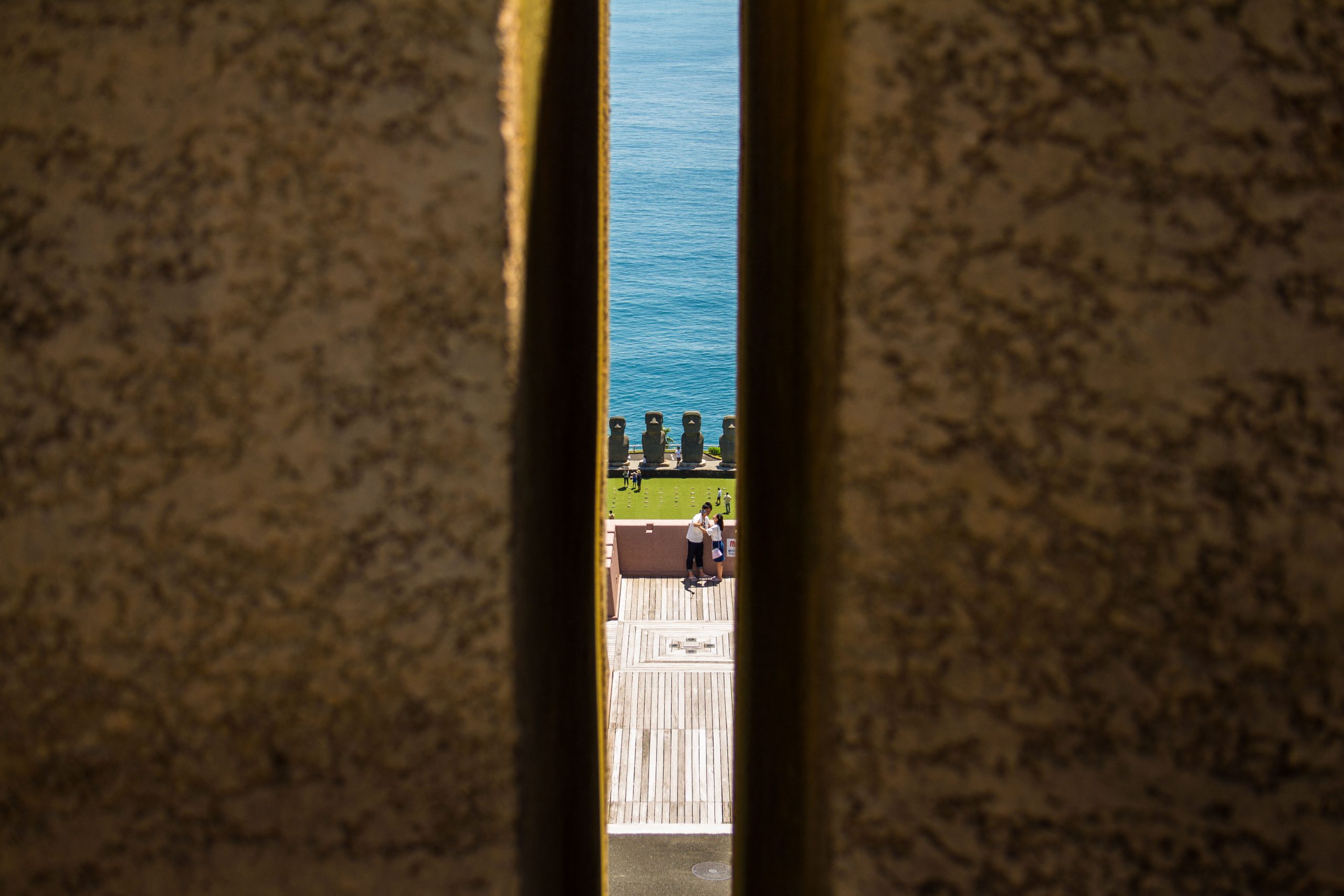 In the Valparaíso Region of Chile, a group of statues equal in shape and size rise from a site known as Ahu Akivi and stare out into the Pacific Ocean. These mysterious Maoi are just some of thousands discovered on Easter Island, built by the Rapa Nui to honor important people who had passed on. More than 14,000 km (± 8800 mi) away, on the southern coast of Miyazaki, Japan, the world’s only sanctioned replicas of these statues can be found staring back.

Situated on a gorgeous hill that overlooks the Nichinan Coast, the Miyazaki statues form part of a seaside park called Sun Messe. There are seven figures in all, each standing 5.5 m (18 ft) high and weighing about 20 tons. Each statue represents a blessing (health, love, leisure, marriage, money, business, and academics) and the spirit of one of the seven Easter Island explorers.

Why on earth would a city like Nichinan reproduce monoliths from a Chilean island, you ask? Well, because Japan. 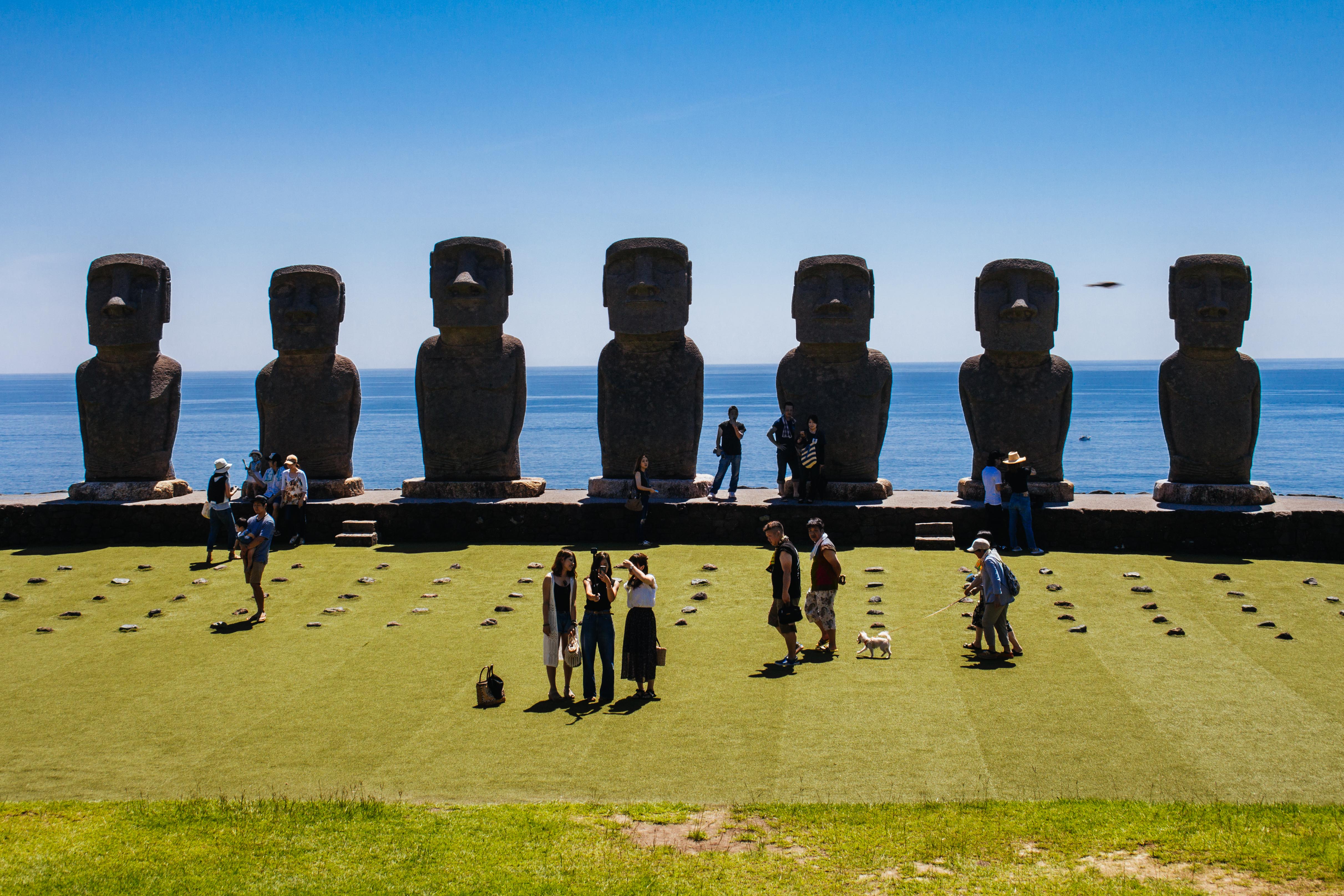 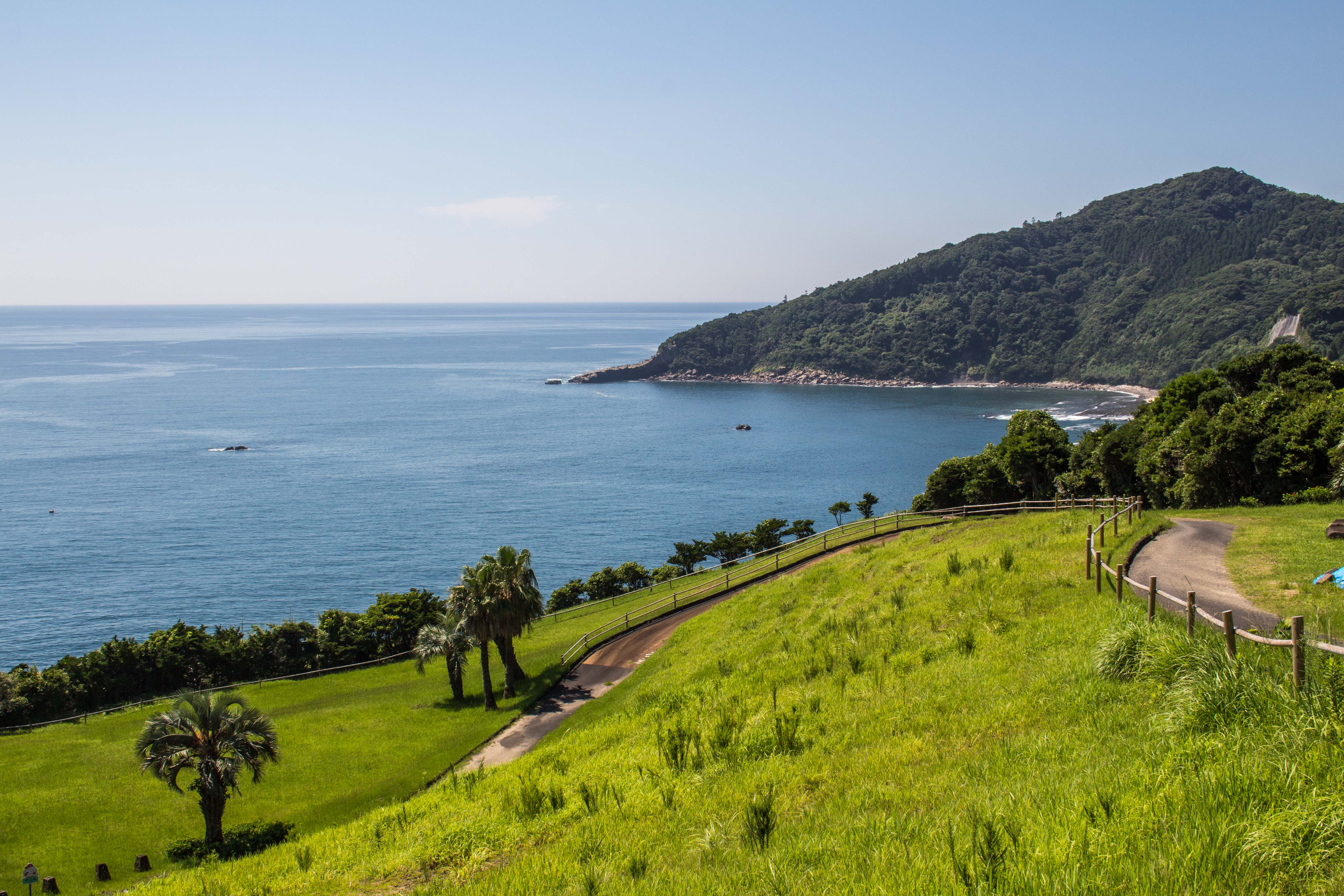 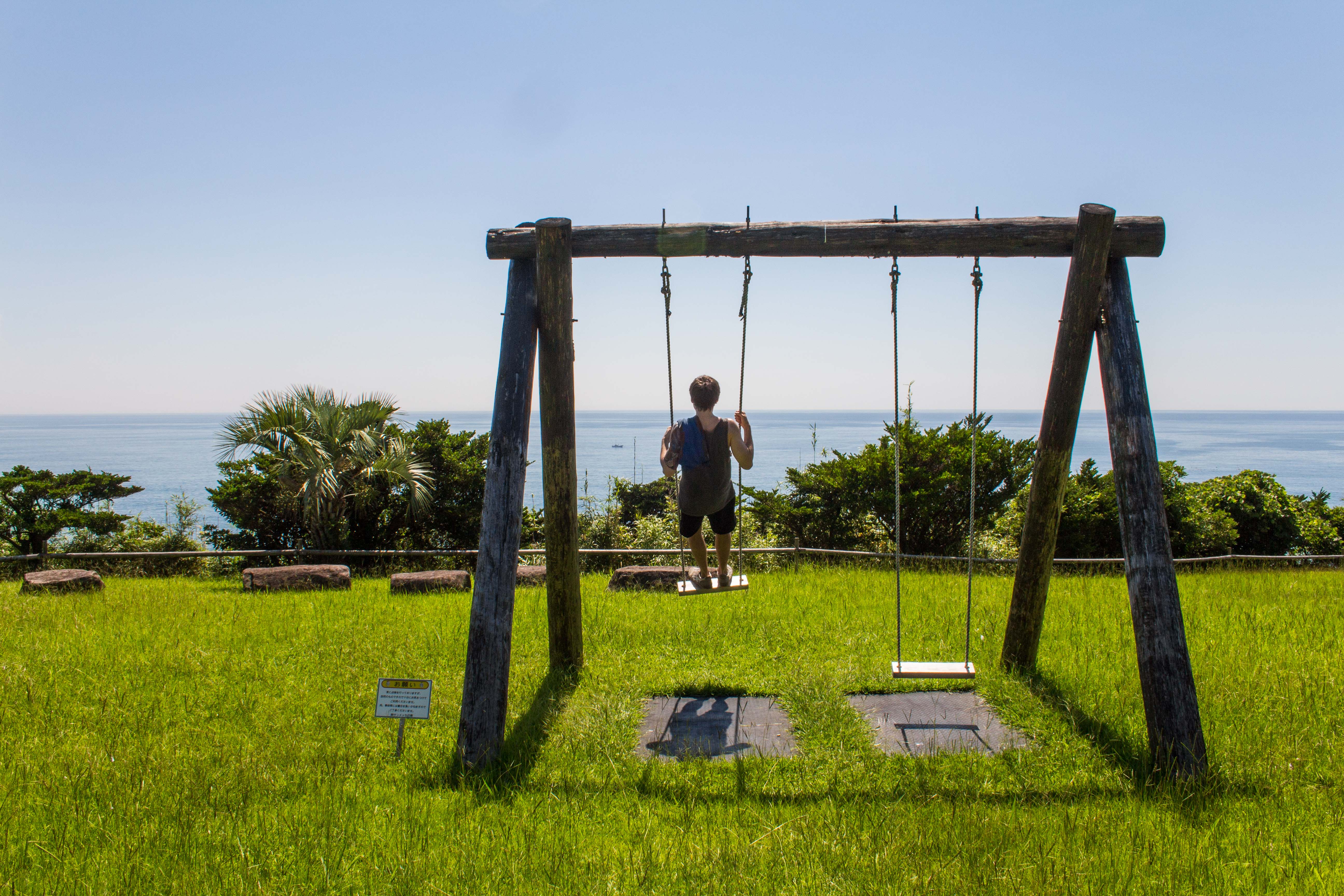 In 1991, a Japanese documentary program aired on national TV featuring the Maoi statues of Easter Island and how, after years of war between the tribes and an earthquake, they had been destroyed. It appealed to the country to take on the responsibility as a nation to restore ruined heritage sites like these statues in dedication to world peace.

The Tadano Corporation, a crane maker in Shikoku, the Nara National Research Institute for Cultural Properties, and a mason named Katsuji Sano formed a team to begin working on the statues with the Institute for Easter Island Studies at the University of Chile. They spent 3 years on the island and completed restoration of 15 statues.

Through the efforts of the team, Easter Island achieved UNESCO World Heritage Site status for the Rapa Nui National Park. In thanks, the Committee of Patriarchs of Easter Island authorized the team to build a replica of the Maoi in Japan for the first time. 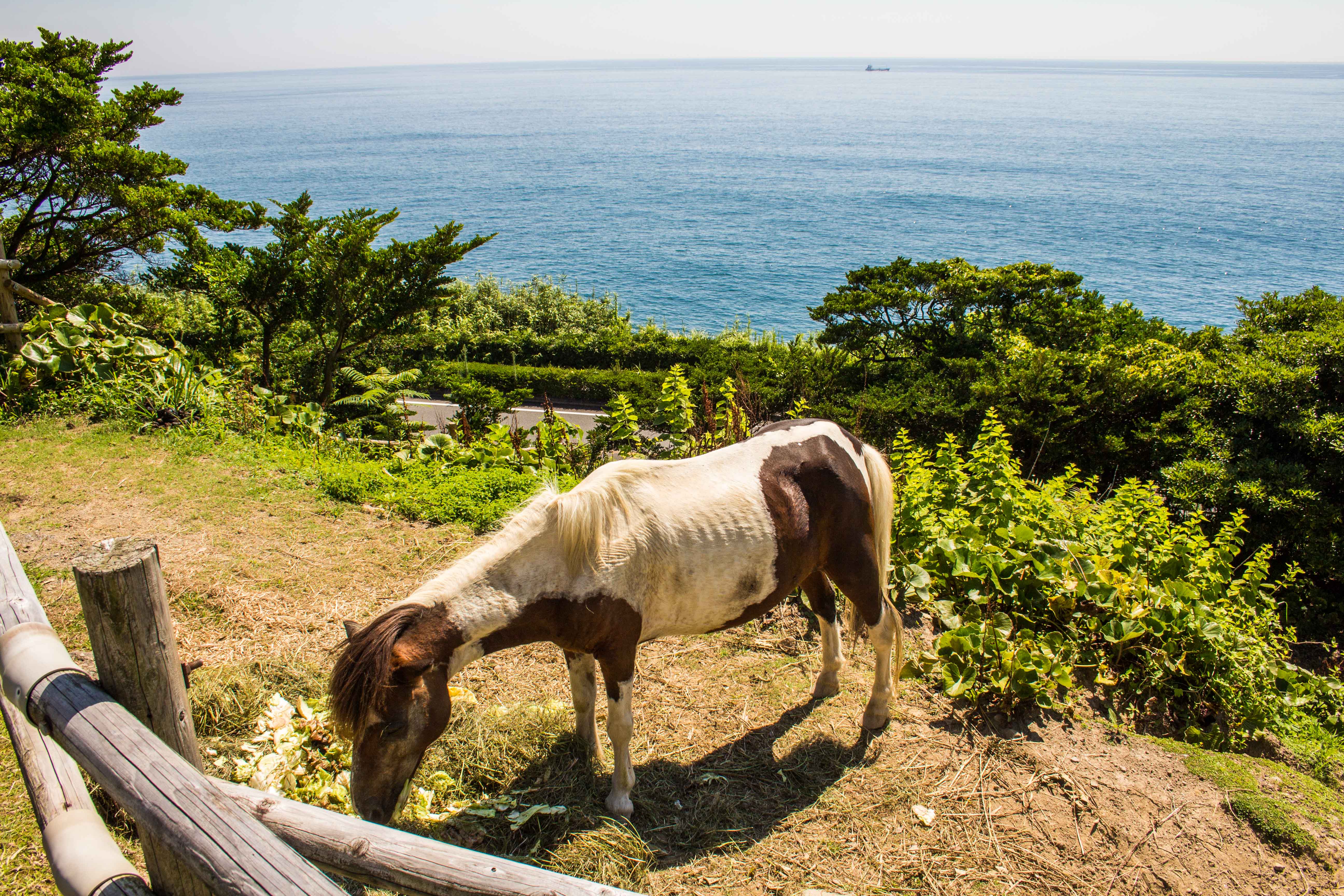 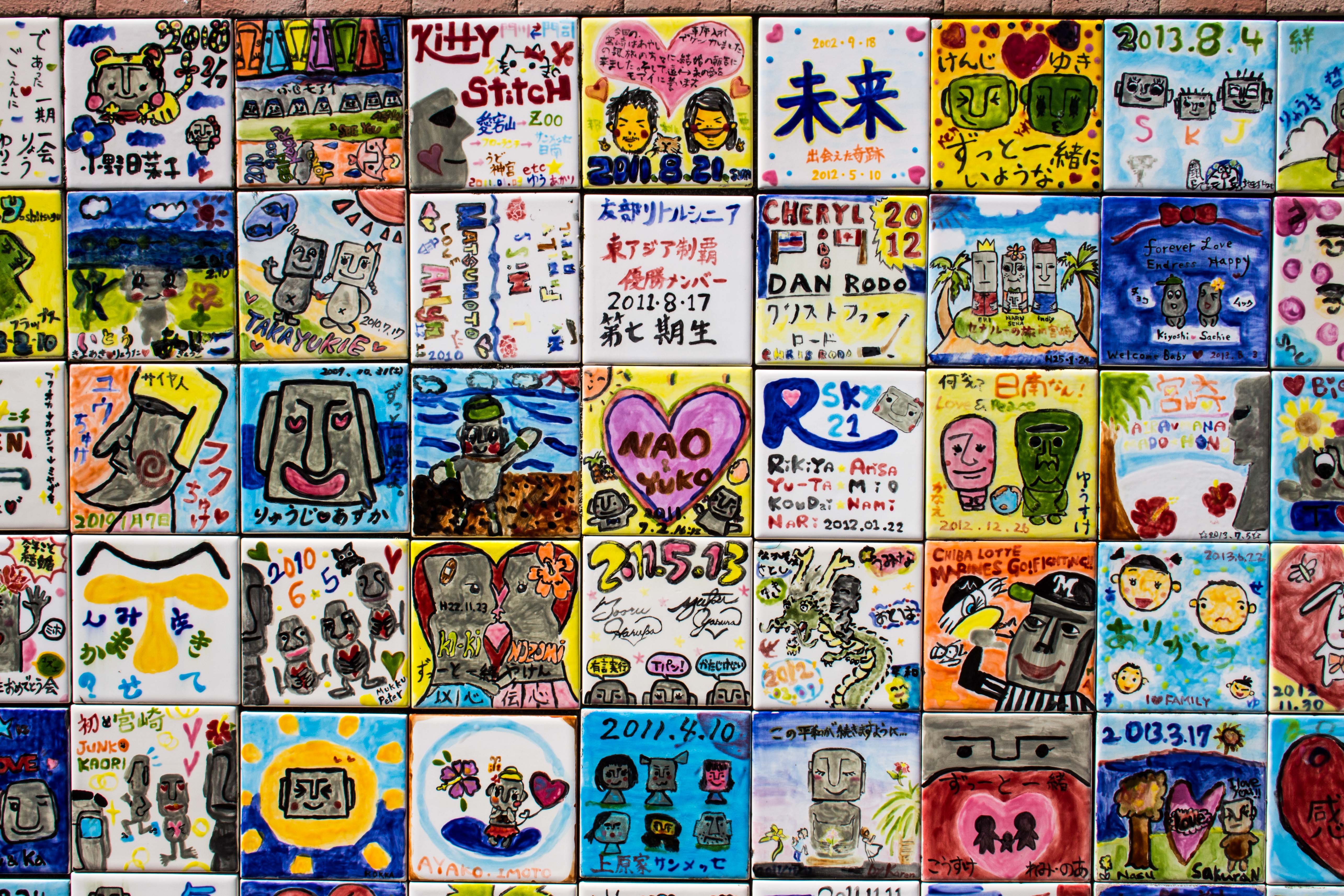 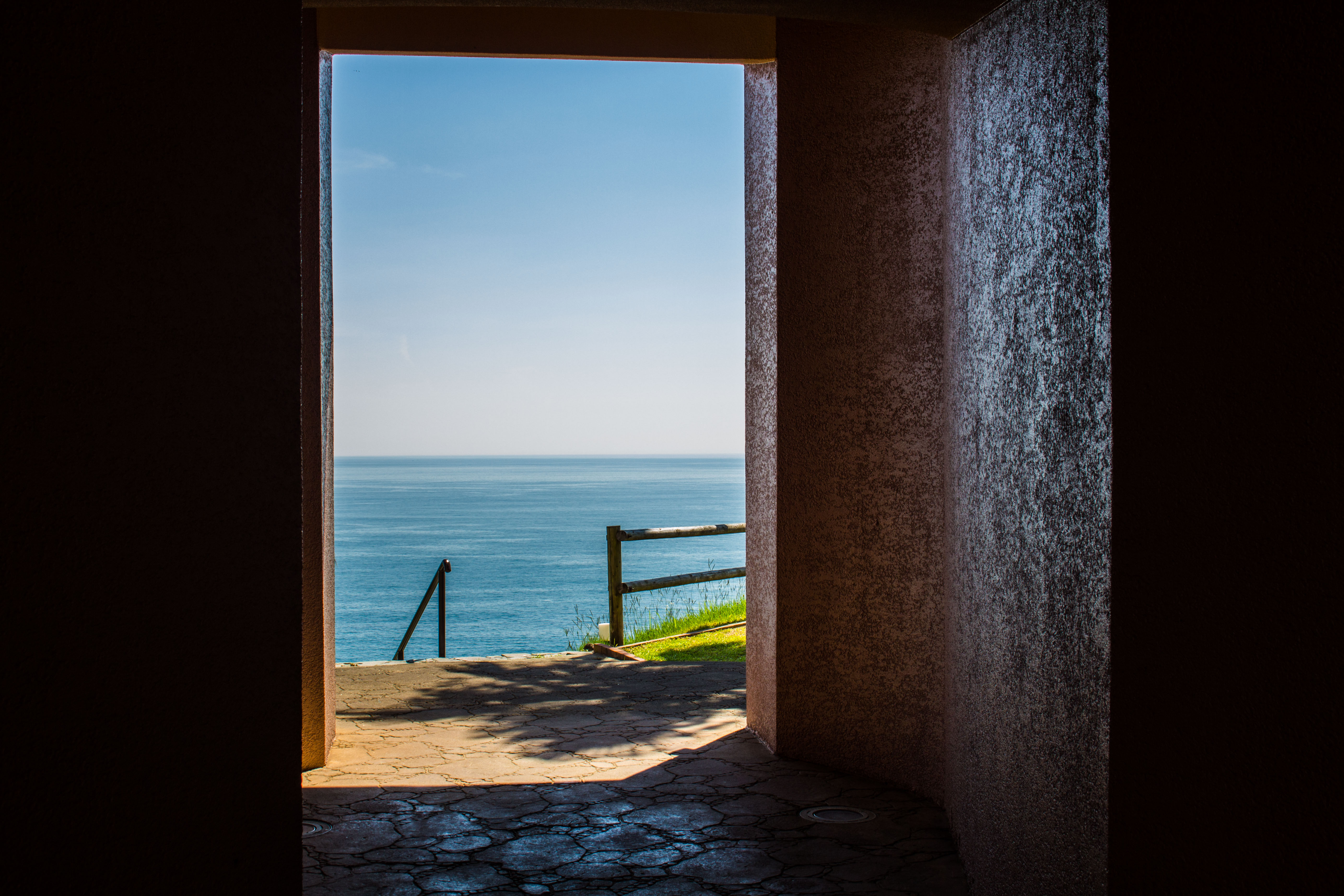 The Tadano Corporation had a good relationship with the Ittoen community of Kyoto who had launched a hillside pasture on the Nichinan Coast to breed wagyu (Japanese cattle). The landscape of the area seemed to match the original settings of the Maoi statues and so when the farm closed in 1987, an appeal was made to use the hill to boost the development of the area. And so, the statues were placed here and Sun Messe was born in 1996.

This all according to the theme park’s brochure, of course. The Tadano Corporation tells a slightly different story: The documentary program that aired featured the Governor of Easter Island who appealed for a crane to fix the broken statues. Tadano staff then visited the Chilean Embassy in Japan to discuss donating a crane and the project to restore the statues formed from there.

Before the team came together, Tadano created an imitation Maoi statue to carry out lifting tests. They later donated this replica to Kagawa Prefecture, where it stands on Megi Island, just west of Takamatsu city.

Tadano has maintained its relationship with Easter Island, donating another crane in 2005 and supporting earthquake recovery efforts in 2010. 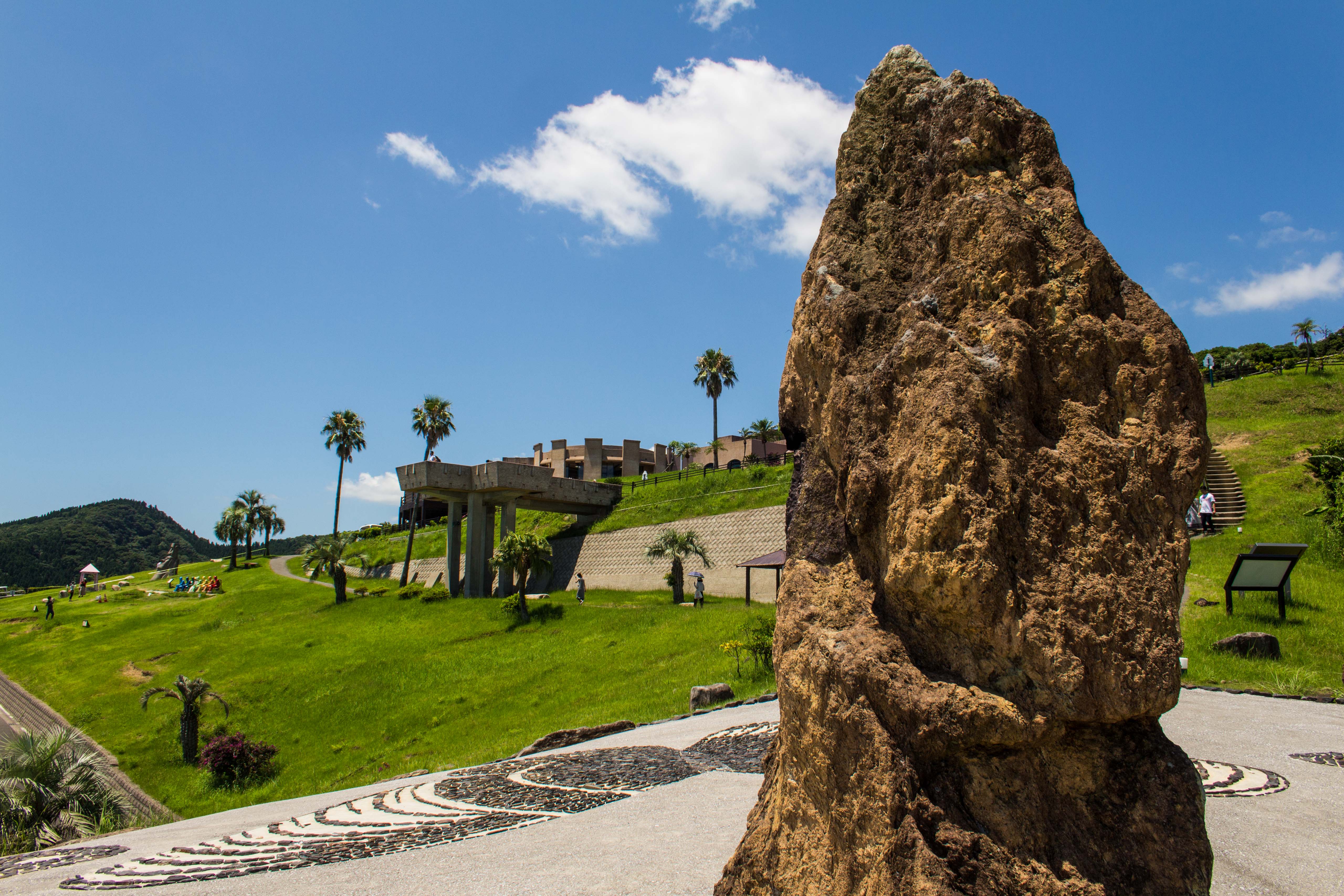 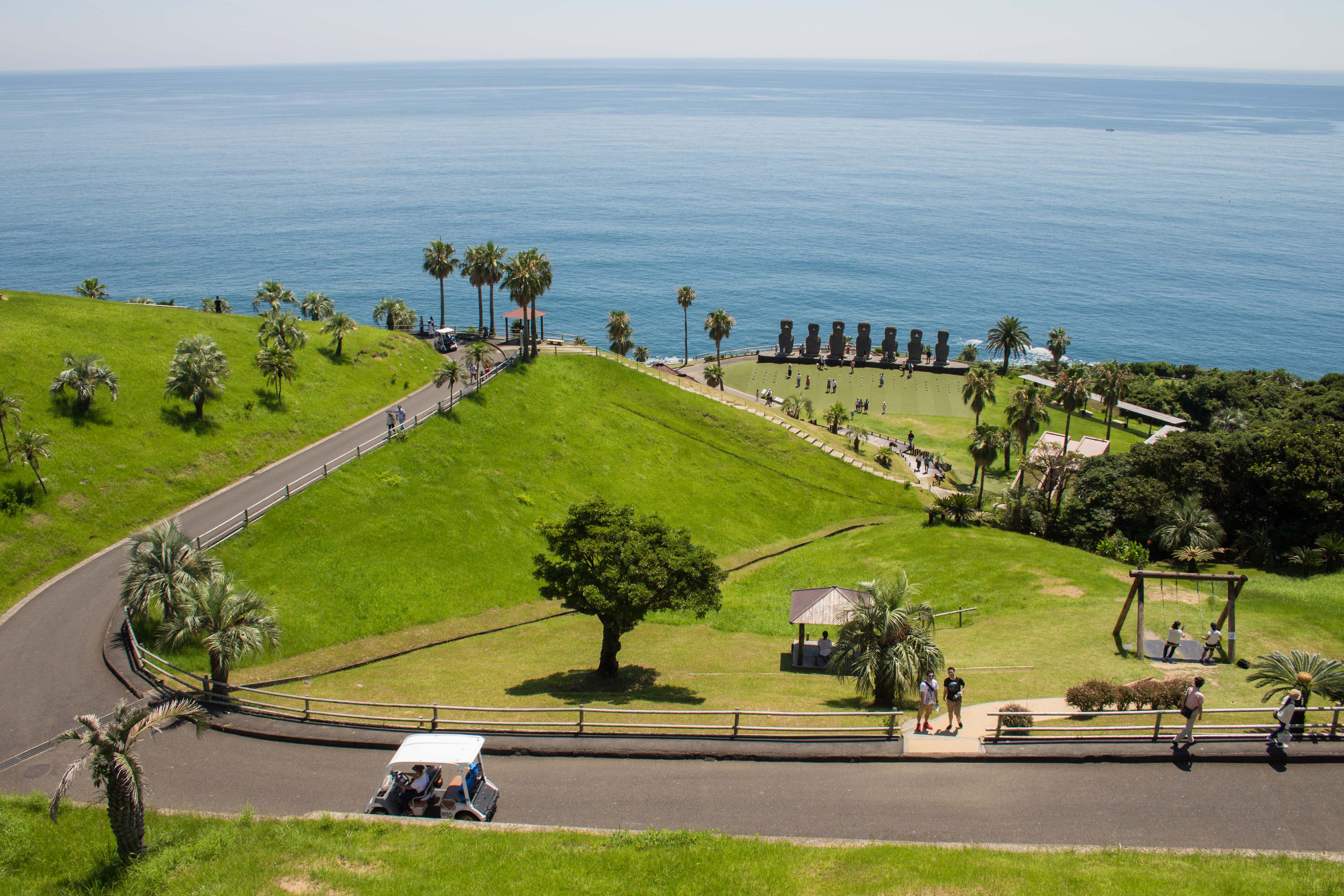 The Sun Messe statues are well known in Miyazaki, but I had yet to see them. When my friends from Fukuoka, Kyohei and Roi, decided to come down for one last weekend to say goodbye before I leave Japan, I figured why not all go together.

It was scorching hot, but a beautiful day. The views of the Pacific Ocean from the hillside are arguably more impressive than the statues themselves, which of course are the park’s main draw. Many visitors pray in front of replicas or pose next to them for pictures.

After the novelty wears off, you can spend the rest of the time browsing the other attractions scattered over the four-tiered hill which is navigable by hired gold cart should you tire of walking in the sun. There are swing sets that look over the ocean, an animal barn that contains goats, horses and tortoises, several different sculptures, an insect expo, Maoi museum and a butterfly park. There are also two restaurants with to-die-for ice cream flavors and a gift shop selling Maoi-themed souvenirs.

If you happen to visit Sun Messe on spring or autumn equinox days, you can see the sun rise from behind the middle of the Maoi statues, pass through the gap in the Sky Tower, run up the Sun Steps and reach the Earth Appreciation Bell, located at the top of the hill.

All in all, it’s a pretty quirky place, but one that’s definitely worth a visit if just for the views alone. Other attractions nearby include Arashi-no-Yu onsen, Udo Jinju, and Aoshima. 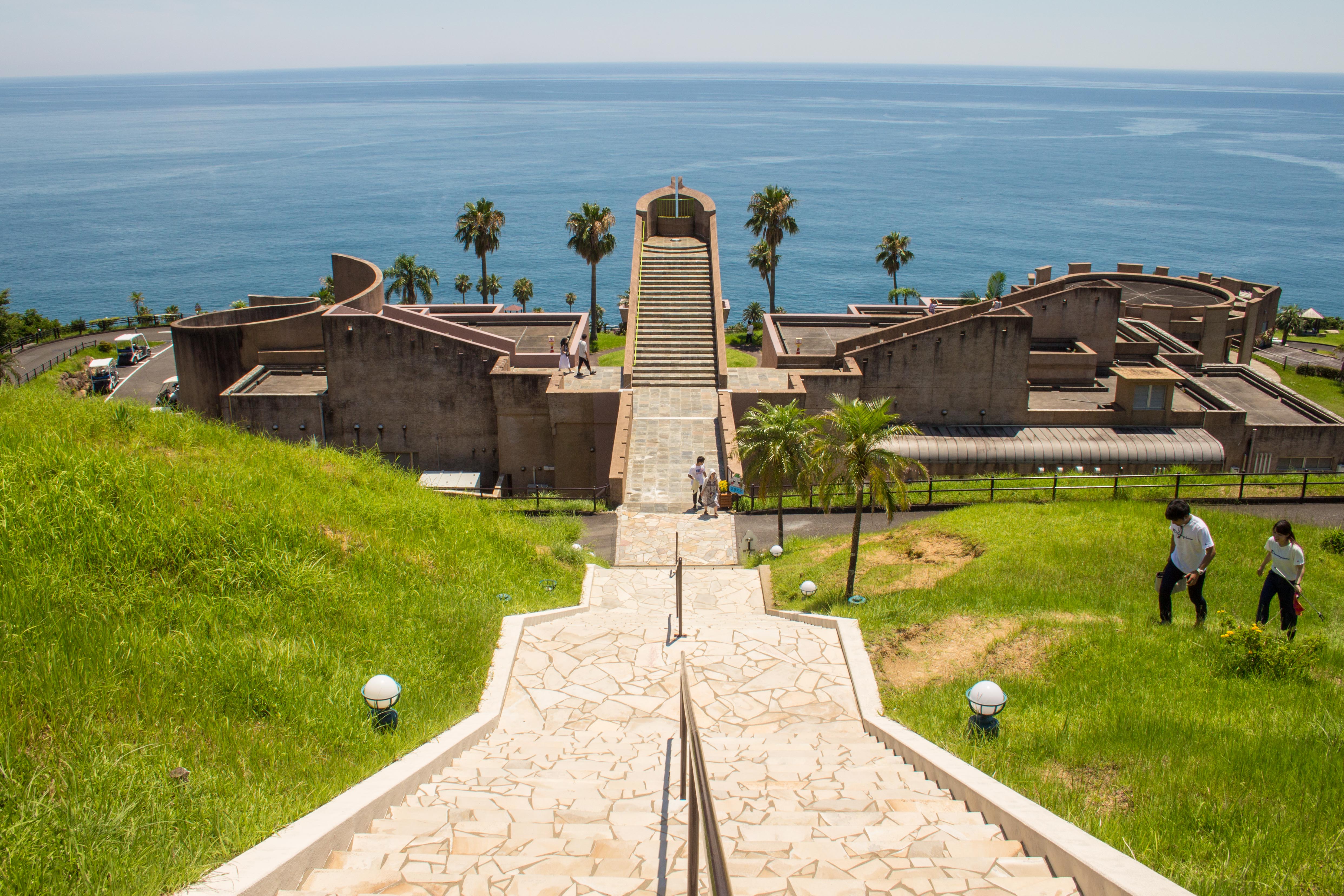 Sun Messe has a 700円 entrance fee and is open from 09:30~17:00 daily, except the 1st and 3rd Wednesdays of the month. Discounts are available for groups larger than 15.

You can also get there by bus; take a Nichinan-bound bus from Miyako City (approx.. 60 min) and get off at Maoi Cape; or take the same bus from Miyazaki Station (approx. 1.5. hours) which also stops at Udo Jingu and Aoshima.

The nearest train station is Ibii, which is a 10 minute taxi-ride away.