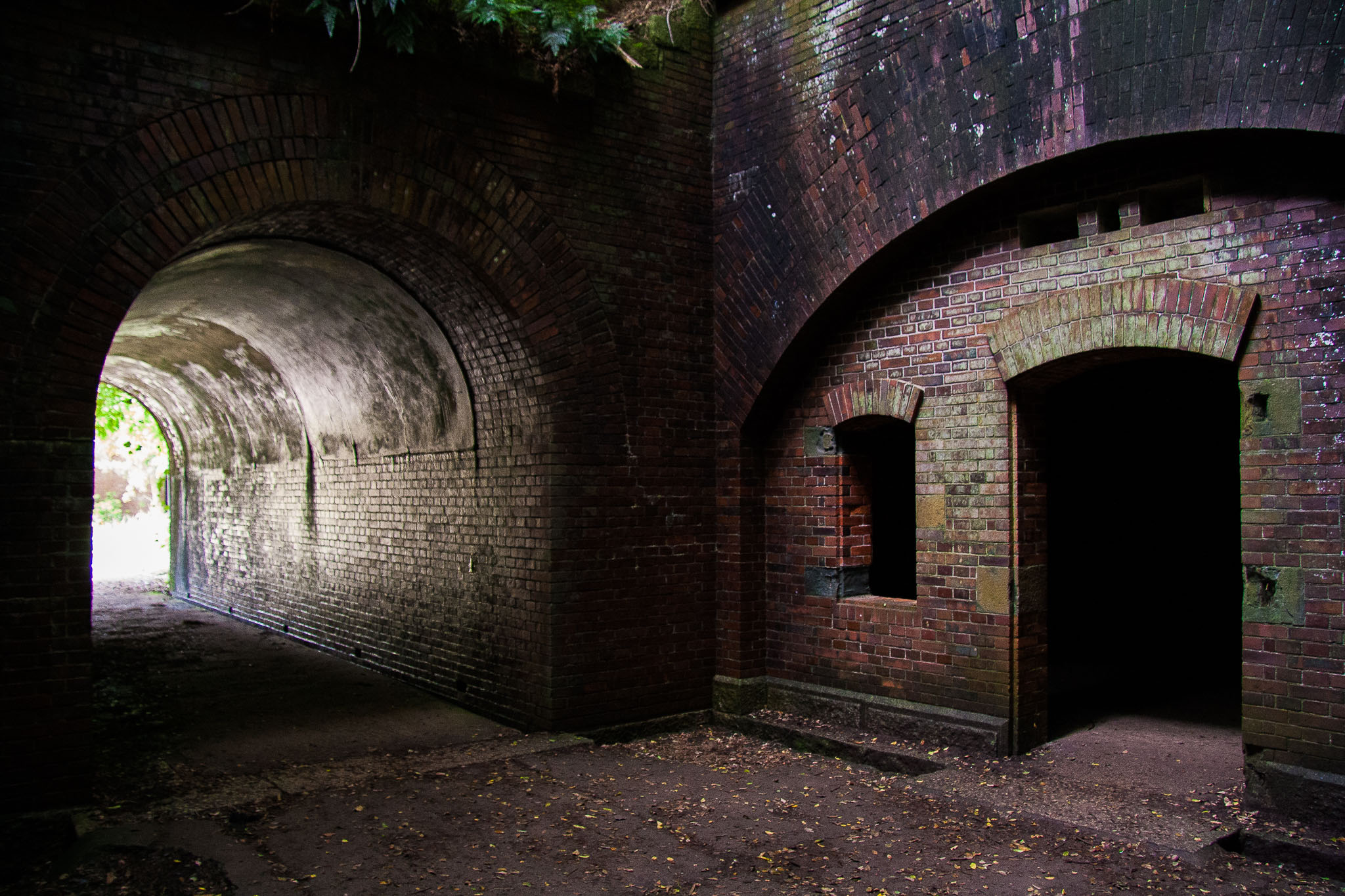 “Do you see the jellyfish?” Mark pointed excitedly into the water.

I mumbled an acknowledgement, afraid that if I opened my mouth, something other than words would come out.

We had been bobbing up and down on a ferry for the last 15 minutes and it appeared I had left my sea legs back in Osaka.

We had set out early that morning from Nankai, taking a train to Wakayama, and then another to Kada. A short walk from the station, Kada Port was our second-final destination. If I managed to keep my breakfast down, we’d soon be exploring Japan’s real life Laputa. 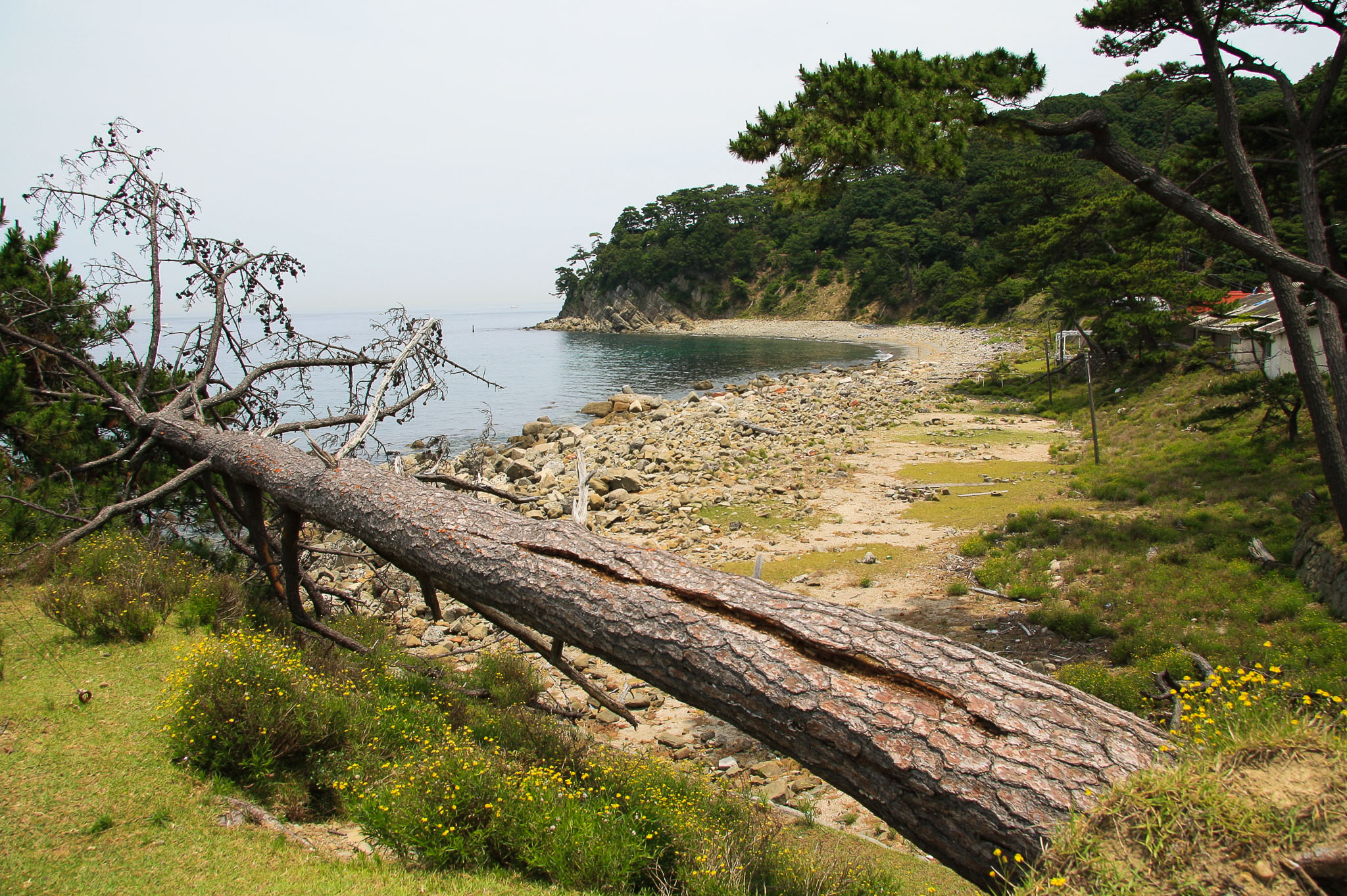 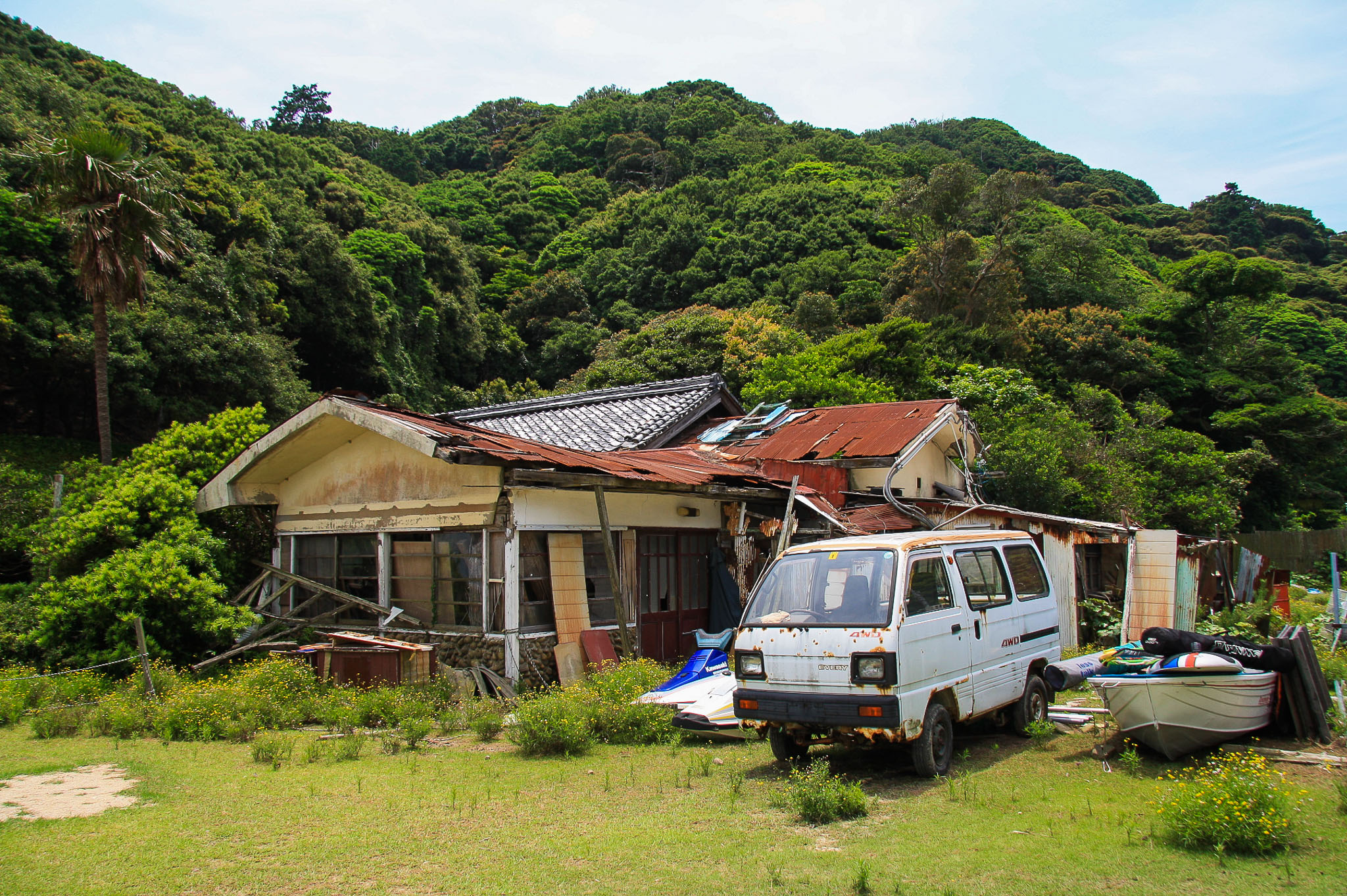 Okinoshima is one of four islands off the coast of Wakayama prefecture that are collectively known as “Tomogashima” (友ヶ島). Floating on the Kitan Strait of the Seto Inland Sea, the island chain forms part of Seto-Naikai National Park and is the first of 28 destinations for Buddhist ascetics on the Katsuragi Pilgrimage. It is a treasure trove of lush forests, rare rock formations and diverse plant and animal life.

From the Meiji period until the end of World War II, Tomogashima also served as an important military base. Today, visitors can explore the remains of old bunkers, underground tunnels and powder magazines by hiking the trails on Okinoshima.

These red-bricked ruins, slowly being reclaimed by nature, are likened by many to scenes from Hayao Miyazaki’s Castle in the Sky, attracting fans of the anime in addition to history buffs and nature enthusiasts. 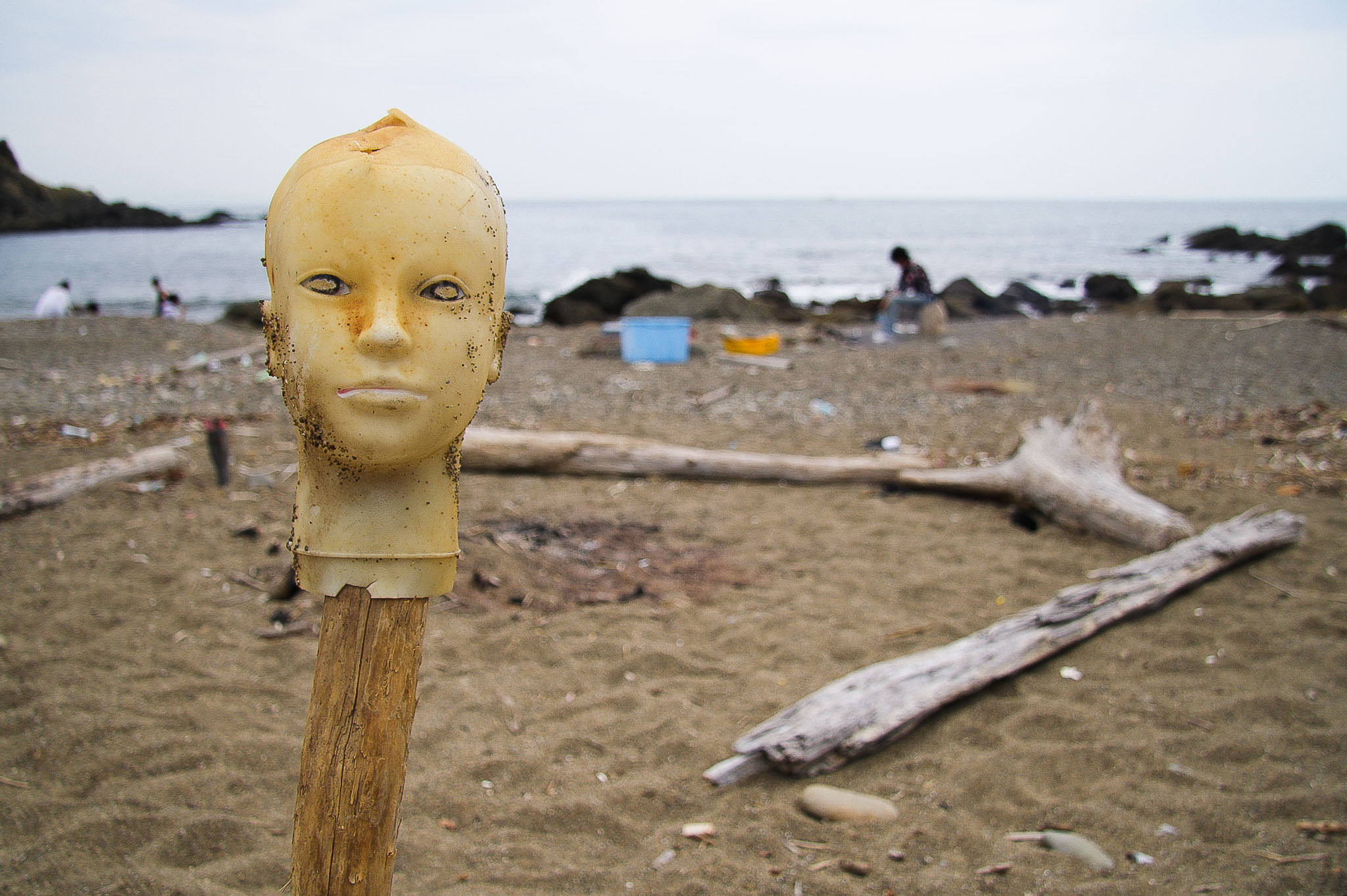 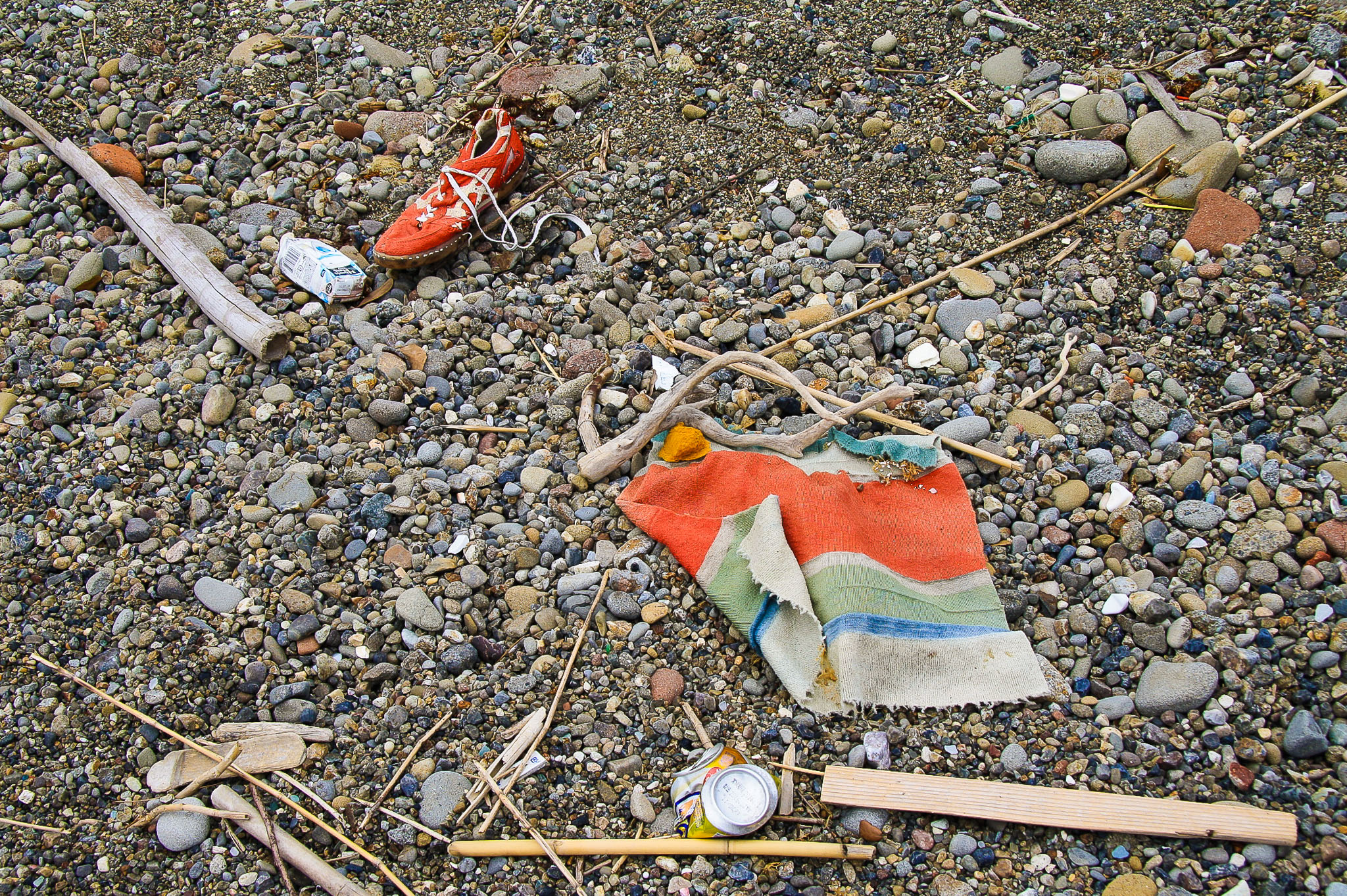 I guess I fall somewhere in the middle; I wouldn’t exactly call myself a hiker, but I’d walk for a year if it meant the opportunity to take some cool pictures. Besides, we all know I can’t resist a good set of ruins, or the chance to play out my LOST fantasies (which, in case you didn’t know, manifest from the best TV show of all time).

When we finally stepped off the boat and made our way to the shore, I was finally able to enjoy the jellyfish Mark had been talking about pulsing along the pier. The water lapping against its columns was crystal clear, not like the weather we were having.

The air was hot and sticky, and for the first time all day I wasn’t looking forward to our hike. But it was either in this or the next day’s forecast rain. 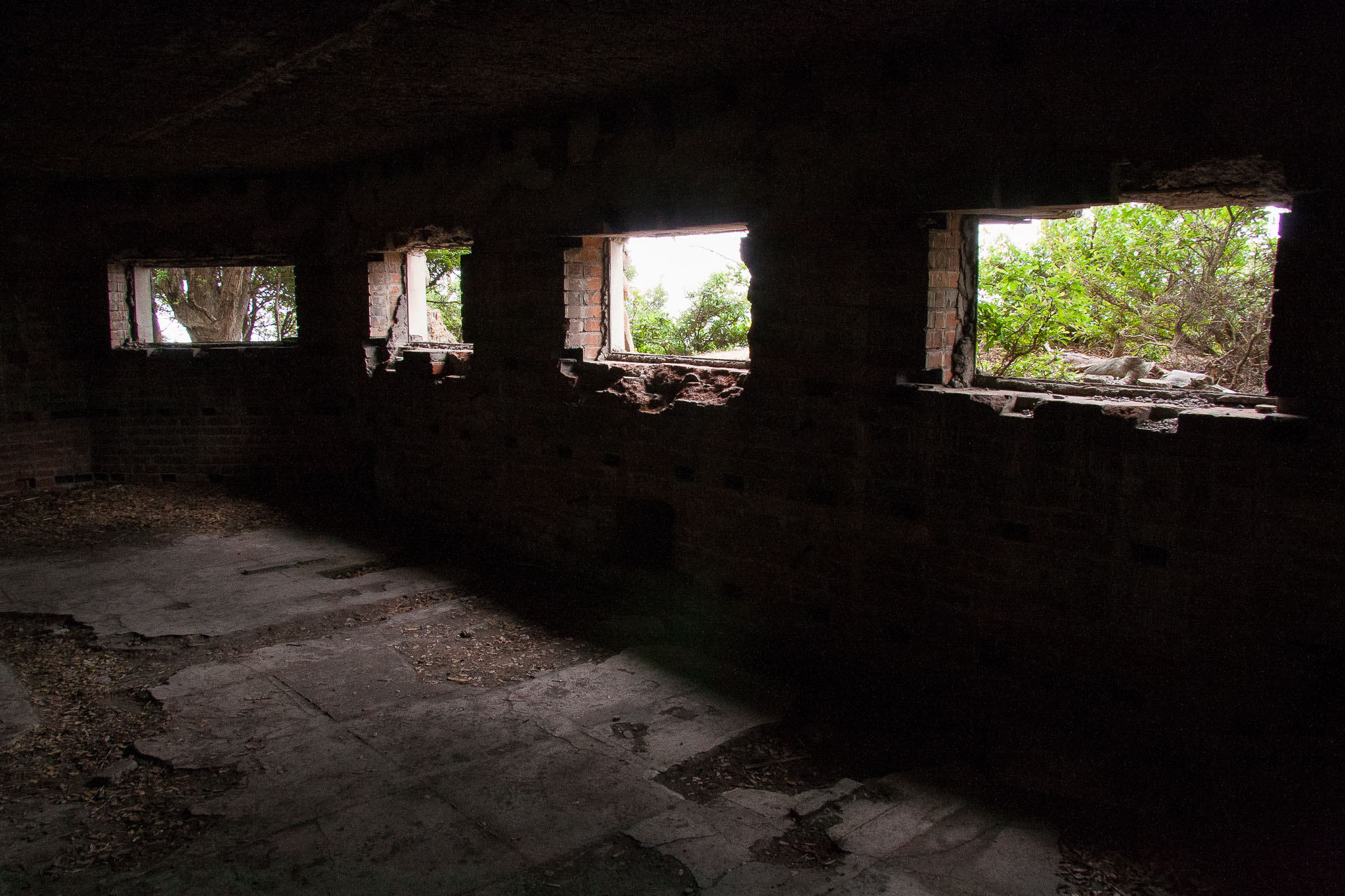 “Okay, let’s eat!” I practically ran for a bench on the open grassy area that greeted us after the pier. Our three hour journey just to get to the island had left me more than ready to tuck into our stash of konbini snacks. We were advised to bring our own food and water, since there wasn’t as much as a vending machine on the island (a fallacy for Japan).

“Haha, I guess they lied,” I motioned to the shiny, red machine staring back at us from across the grass. At the start of the trail, we stumbled upon a restaurant too.

“There’s another building back there with tables and chairs inside, and it looks like you can camp here too,” Mark observed.

‘So much for it been uninhabited,” I retorted. 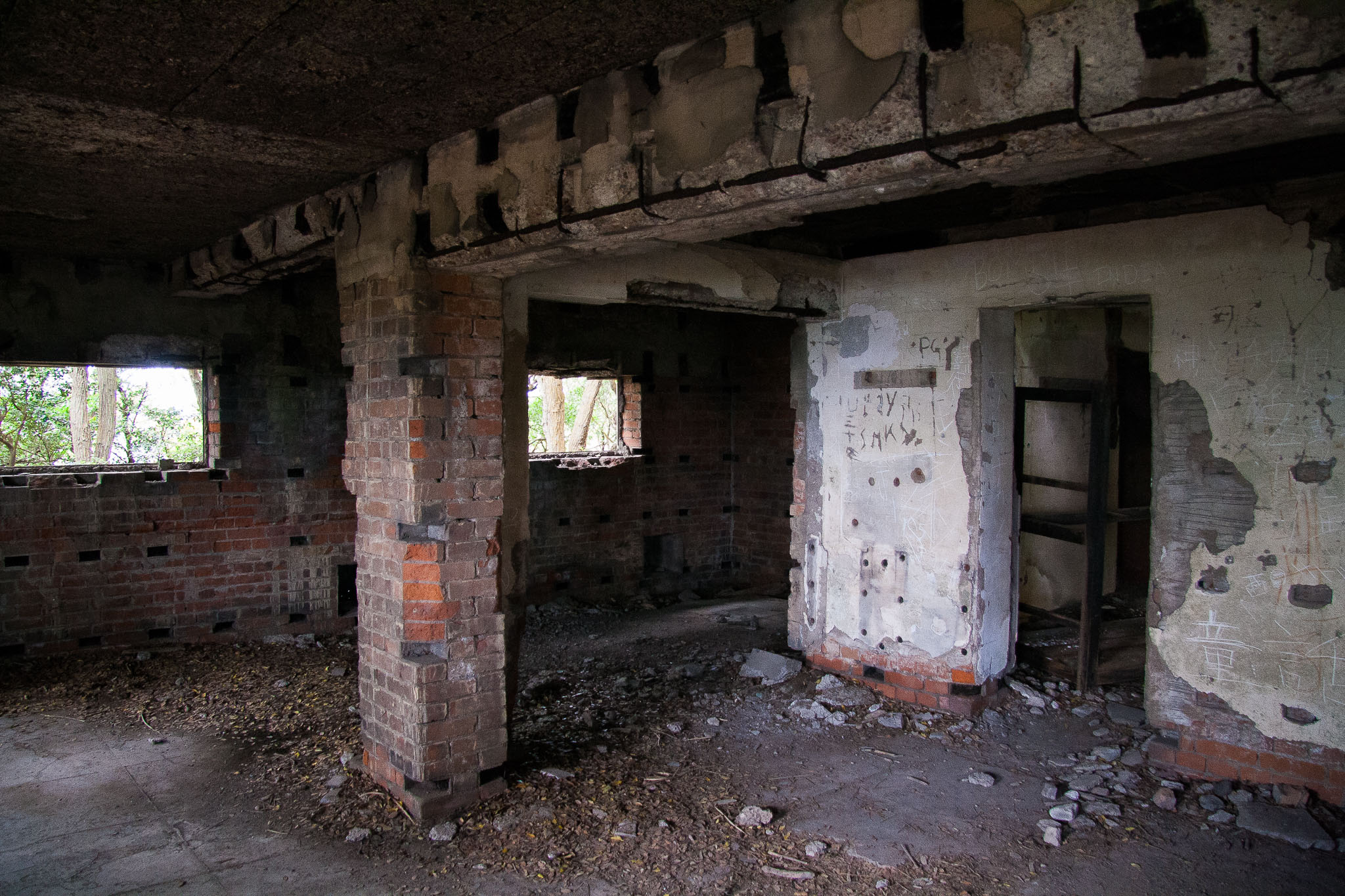 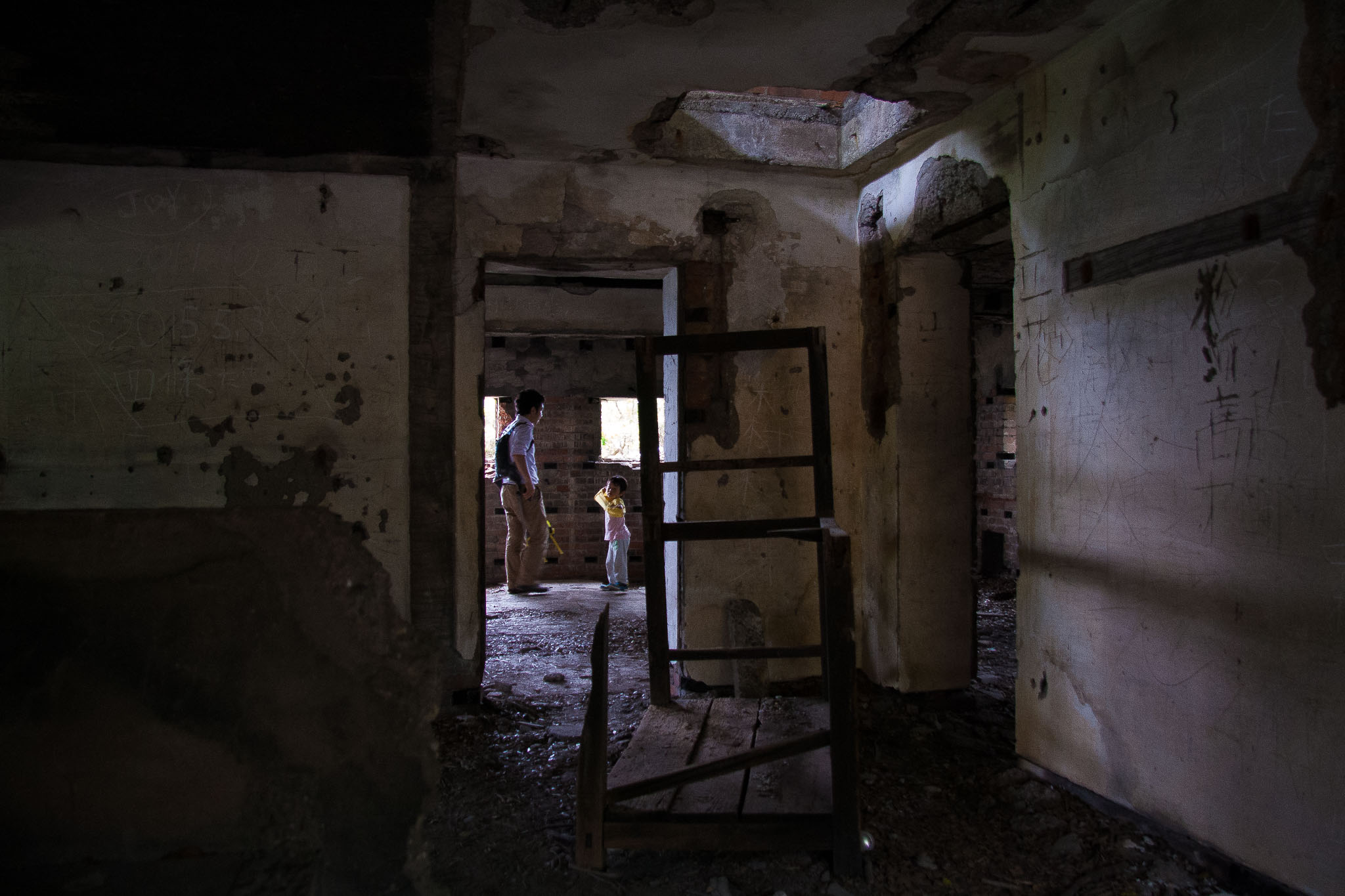 But as we continued to walk along the island’s coast, the modern buildings fell away and we were treated instead to an abundance of vegetation and beautiful views of the surrounding nature. After a moderate incline, we reached the first set of ruins.

The site of the Second Weapons Battery is a fortress facing the Seto Inland Sea. It was bombed by the allies after the war and has been left as is. “RESTRICTED AREA,” the sign read, “These remains of an artillery battery continue to erode and therefore are very dangerous. Please don’t enter this area.” And so, naturally, we did.

Once we’d finished looking around, I was drenched in sweat. “It got hot fast,” Mark complained as I dug into my bag for a facecloth. It amused me to no end when we reached the top of the nearby lighthouse’s steps and found a woman reapplying her makeup. 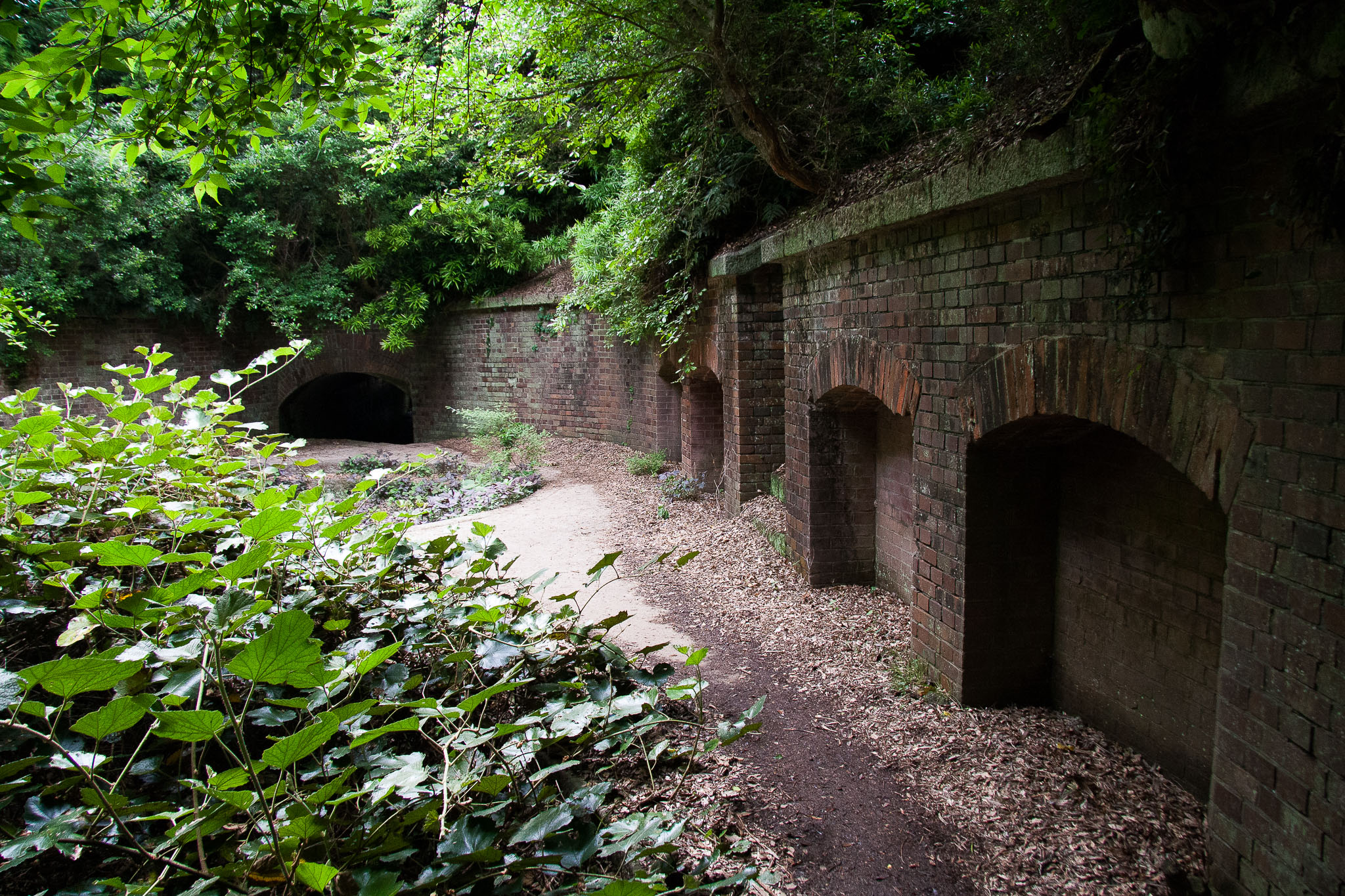 Built in 1872, the lighthouse is the eighth oldest in Japan and is still in operation today, helping local boats navigate the surrounding waters.

We took a break when we reached a small beach and tucked into more of our snacks, watching a group of elderly hikers scour the waters for crabs.

A long, winding path took us from there to the Old Navy Listening Office, which is one of my favourite ruins on the island. Built into the cliff side, the windows look out onto the sea and giant skylights let sun trickle in from the ceiling.

We were on our way to the Third Battery Site, the largest ruin on the island, when I felt Mark grab my arm. “Watch out!” 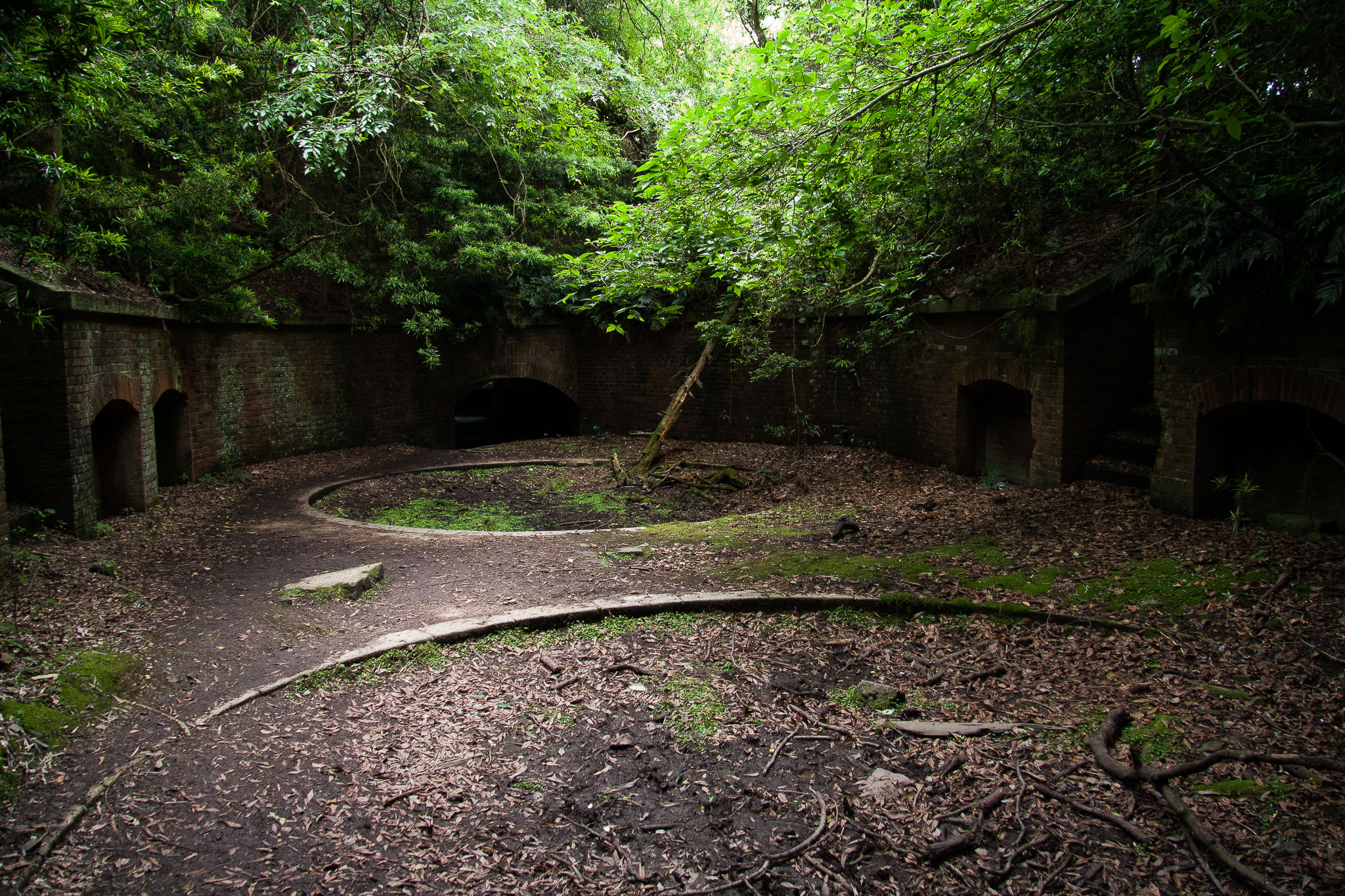 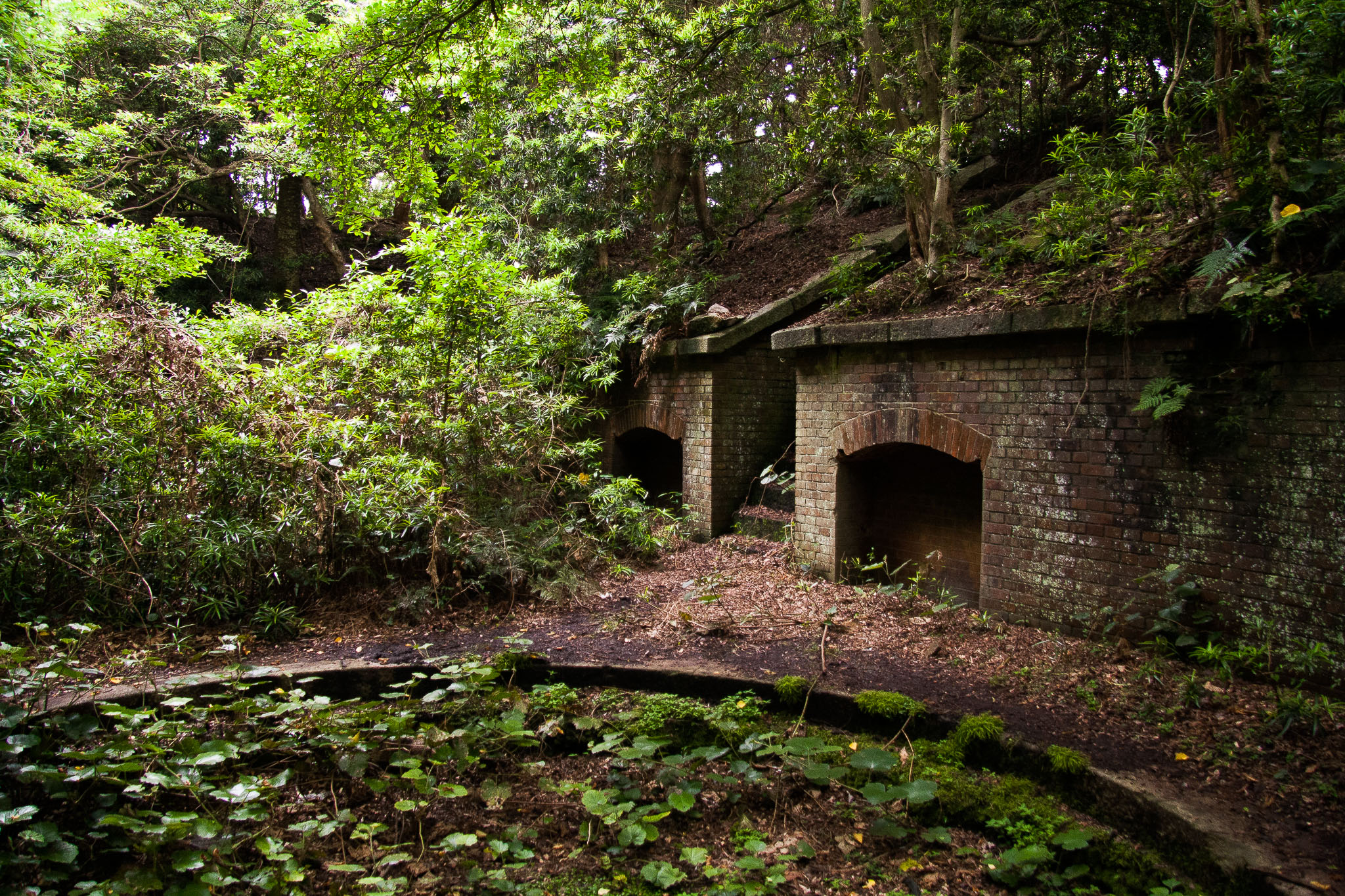 My feet were running in the opposite direction before I could register what I had just seen. Then, berating myself for running at all, I turned around and walked back to him.

I was 99% sure that the limbless reptile slowly making its way across our walking path, less than a meter from where we were standing, was a Japanese pit viper.

Mamushi, as it’s commonly known here, is second only to the Okinawan habu as Japan’s most dangerous snake. Its venomous bite puts around 3,000 people in the hospital every year, where patients typically spend a week in the ICU followed by a month of outpatient treatment. Of those cases, about 10 result in fatalities.

The toes are one of the areas where the snake frequently bites and we had almost just stepped on it. “Holey shit.” I put my hand up to my chest in an absent-minded attempt to calm my racing heart. 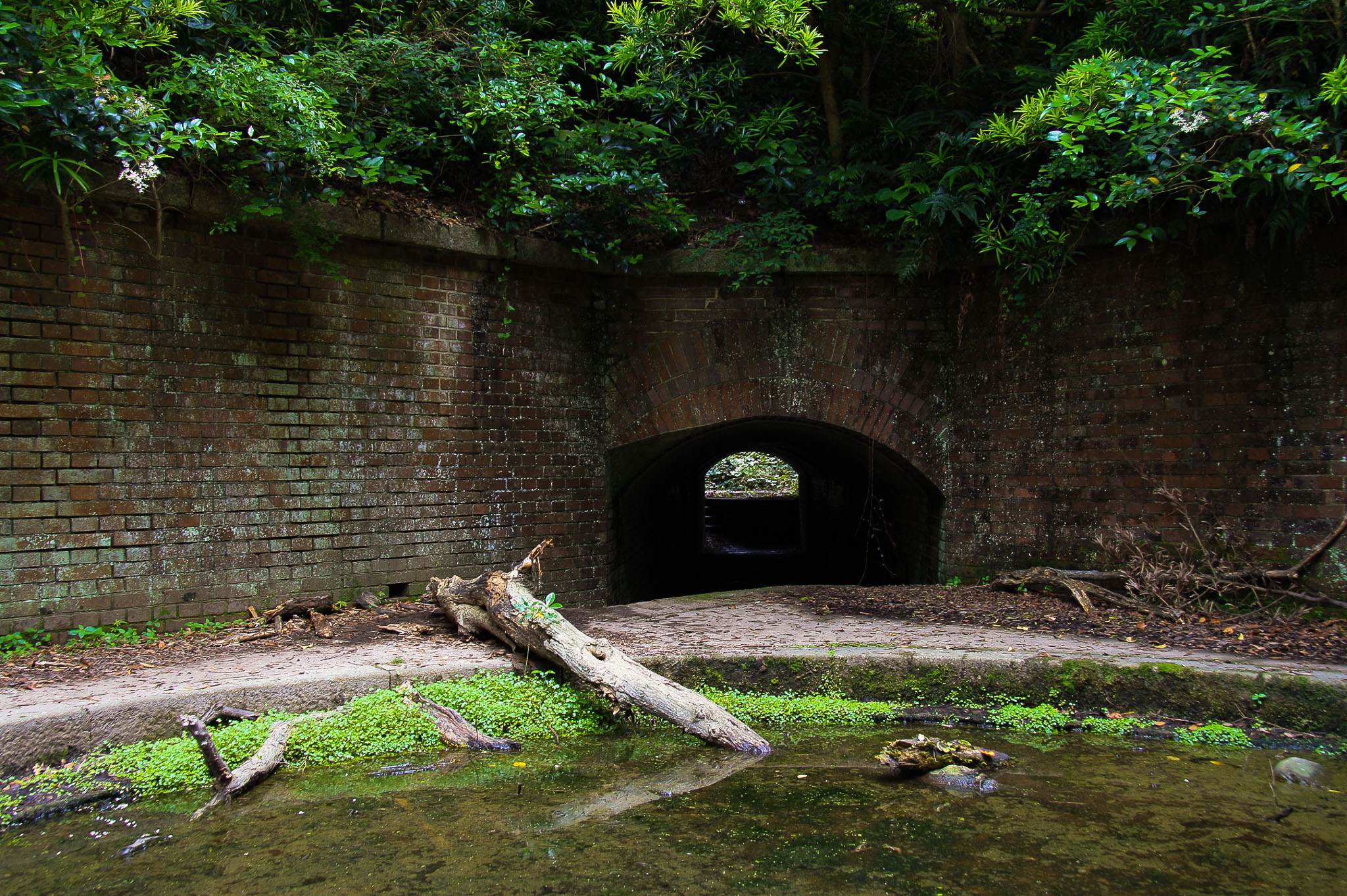 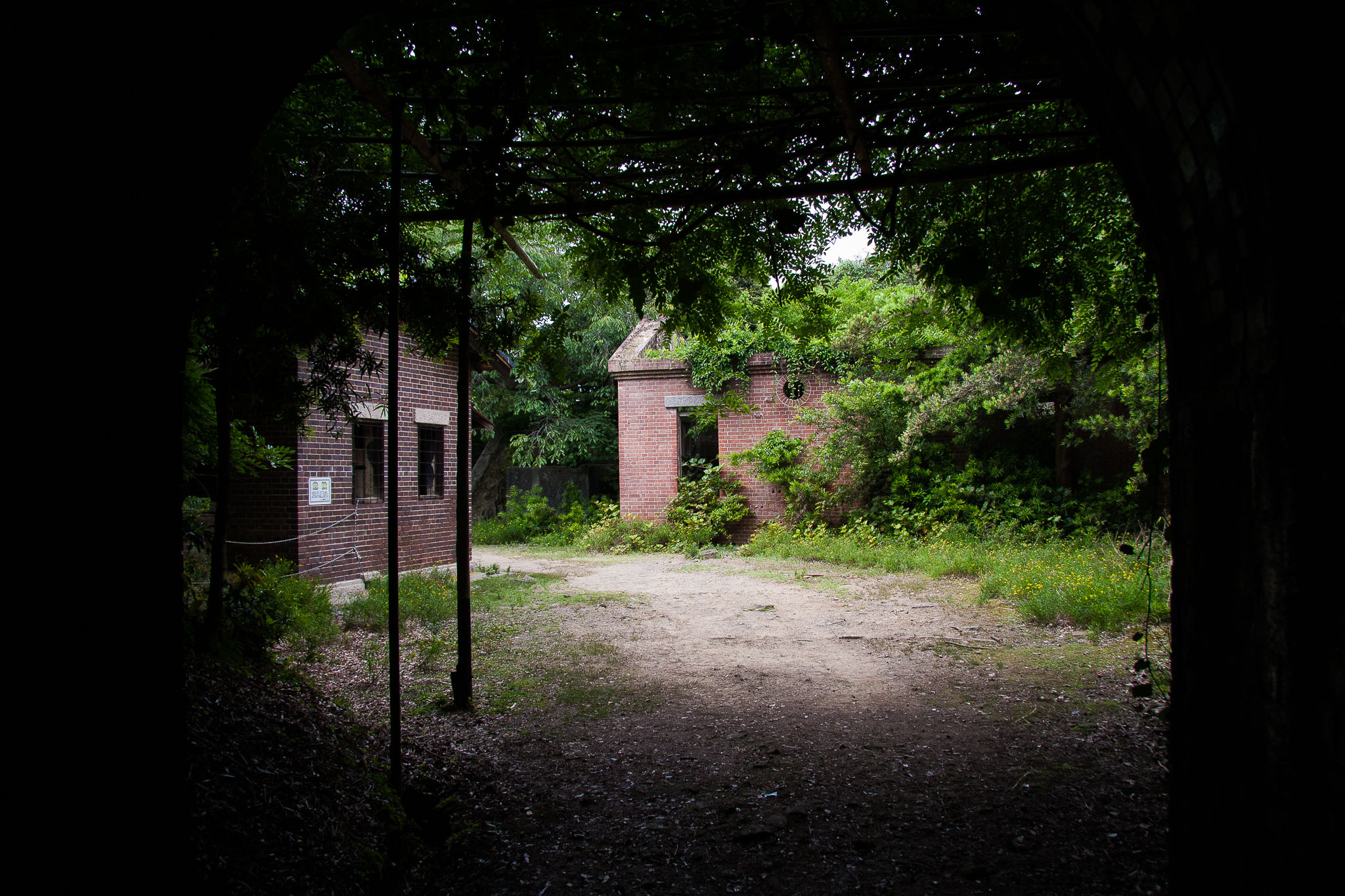 “なに, なに?” (What, what?) One half of the couple that had been walking behind us came running up to see what all the commotion was about.

“ヘビ!” (Snake!) I pointed in the viper’s direction.

“…こちら!” (This side!) The snake had not only arrested my heart but also my Japanese.

We watched as the snake slithered off the path and coiled up into a pile of leaves. Like a chameleon, it blended into its surroundings and disappeared. 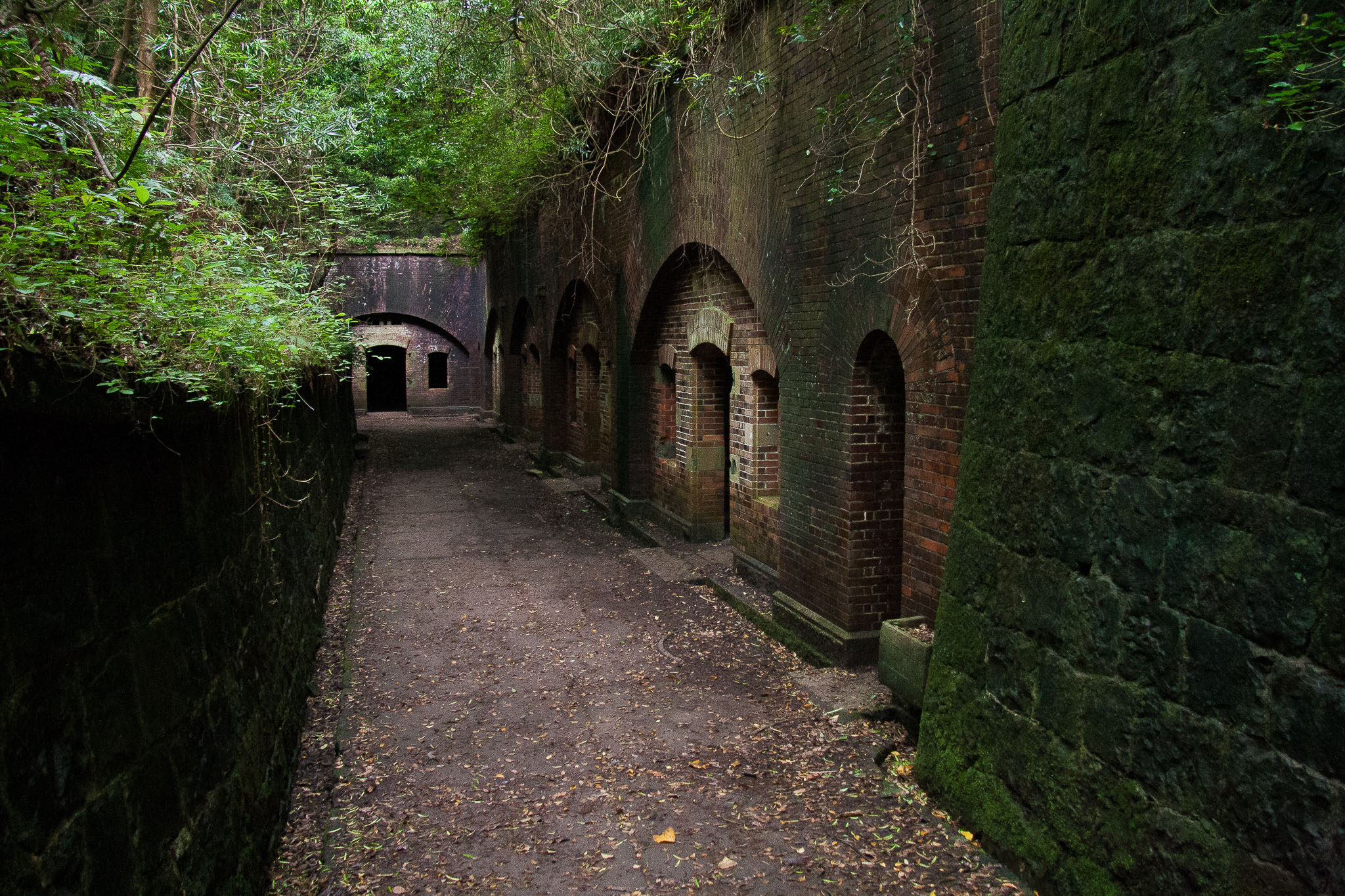 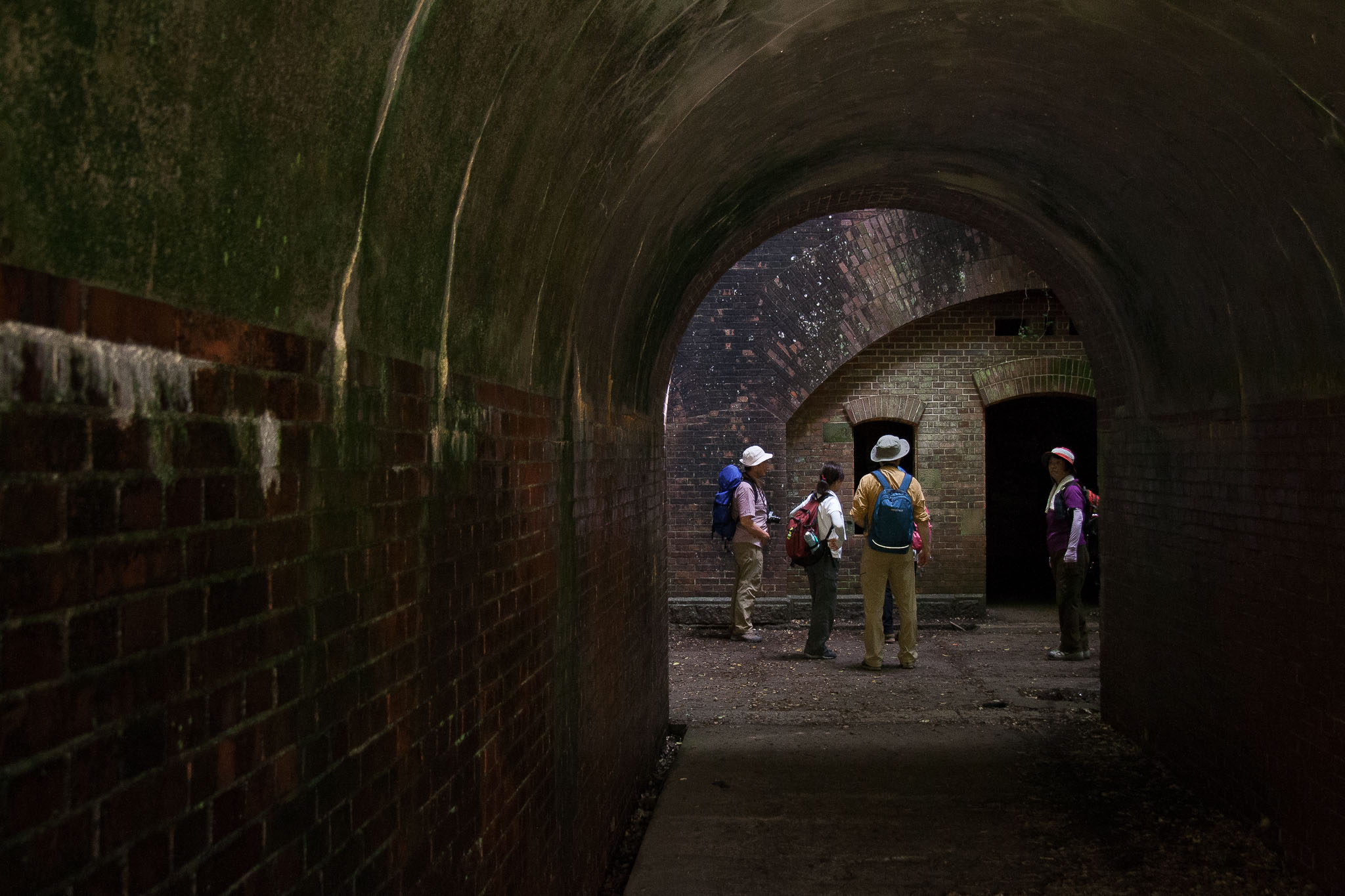 “Great,” I said dryly, “we could have walked past a dozen already.”

But excitement trumped fear when we reached a set of tunnels, the remains from one of the Yura Fortresses built by the Meiji Government to defend the Kitan Strait. This time I grabbed Mark’s arm as he led us by iPhone through the pitch black. The ammunition chambers were also a treat. The old buildings really did look like they came straight out of a Studio Ghibli film.

We spent four hours in total exploring the island, and even then we didn’t see everything. But for a 2000円 round trip, we certainly got our money’s worth.

Exhausted, red, and sweaty, we collapsed onto the train back at Kada Station, ready for a shower and some sleep. 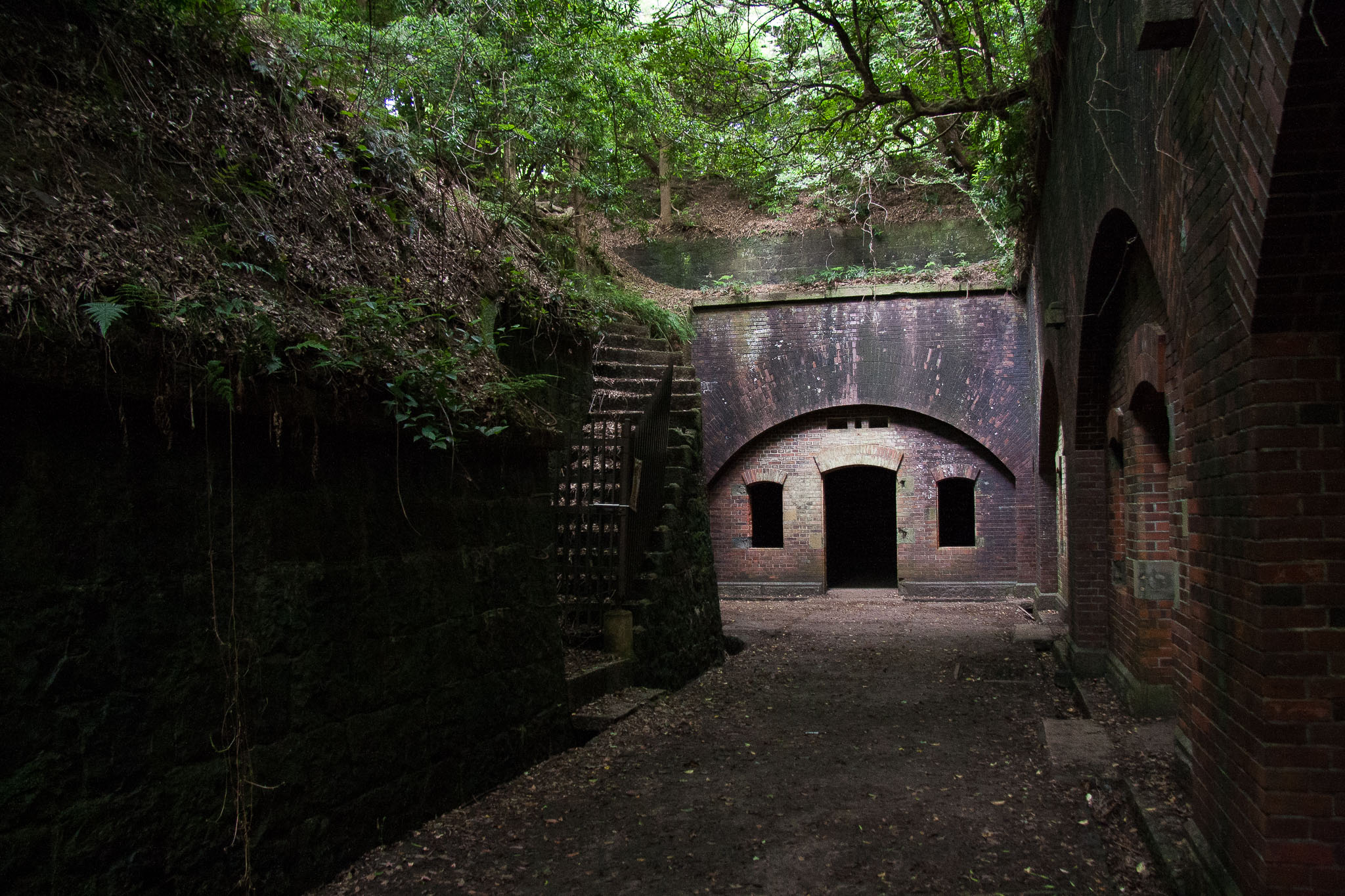 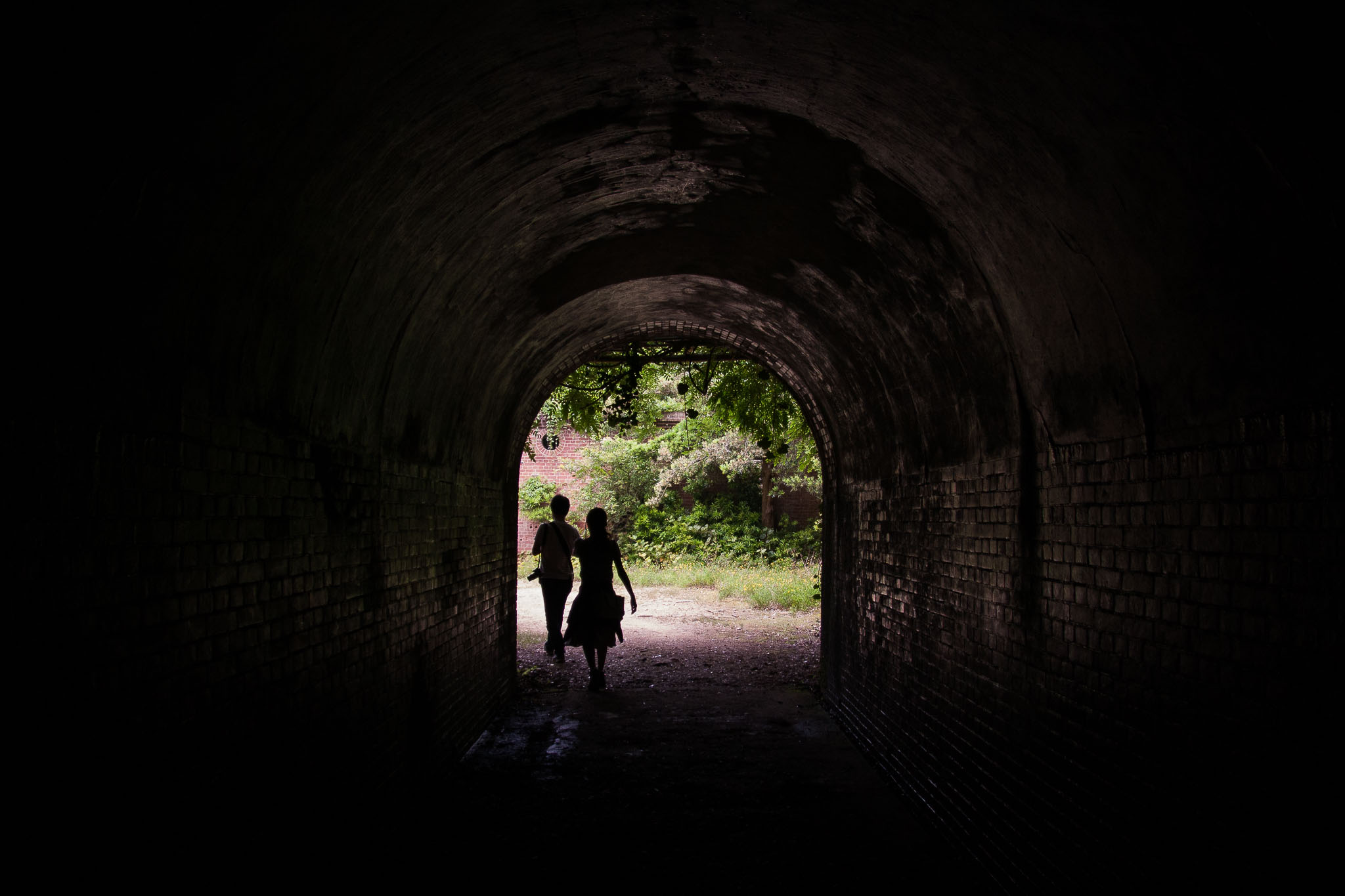 —
From Osaka, take the Koya Line Ltd Express from Nankai Namba Station to Wakayamashi Station. From there, take the Nankai Kada Line to Kada Station. Kada Port is a 15 minute walk away. Buy your ticket at the ferry’s ticket office. The ferry ride is approximately 20 minutes. For the ferry timetable and more information, click here.